It was the gut punch that Baylor’s seniors will have to live with forever.

With the Bears on the verge of knocking unbeaten TCU out of the College Football Playoff picture, Griffin Kell nailed the winning 40-yard field goal as time expired after the Horned Frogs hustled on the field in fire drill fashion.

Baylor fans ready to rush the field stopped dead in their tracks. Many Baylor players were so shocked that they couldn’t speak or move for minutes. Safety Christian Morgan fell to the turf on his hands and knees with his head buried in pain.

Kell’s dramatic field goal lifted the No. 4 Horned Frogs to a 29-28 win on a cold, raw day before 44,393 fans at McLane Stadium. TCU has put together a lot of fourth quarter rallies on its way to an 11-0 record, but never quite like this.

“It hurts, you know,” said Baylor safety Devin Lemear. “It’s the seniors’ last game, and the season has been what it is. You want to send them off on the right note and it hurts to fall short, especially after so much preparation.”

With 25 Baylor seniors honored before their final game at McLane Stadium, the Bears (6-5, 4-4) played with high energy all day, making play after play to move into position to upset the Horned Frogs, who are now 8-0 in the Big 12.

The Bears not only wanted to beat a fierce longtime rival, they were anxious to wash away last week’s dismal 31-3 home loss to Kansas State.

“Last week was an embarrassment,” said Baylor senior running back Craig “Sqwirl” Williams, who rushed for 112 yards against TCU. “We didn’t want to put anything like that on tape ever again. So coming into this week, we really emphasized things like getting the ball carrier on the ground, getting the ball out as an offense, having edge and executing. Today, we went out there and we did those things. But TCU, they’re a great team, they made one more play than us and it just happens that way sometimes.”

Following a Baylor punt, the Horned Frogs were trailing 28-26 when they got the ball at their own 31 with 1:34 remaining. They had no time outs since they had used all three to stop Baylor on three straight running plays.

Senior quarterback Max Duggan went to work as he hit Taye Barber for 19 yards and then spotted Savion Williams for nine. Facing third-and-one, Duggan ran for 12 yards on a quarterback draw to Baylor’s 29.

TCU’s field goal team rushed on the field and managed to line up perfectly before Kell drilled the 40-yard field goal straight through the uprights to send TCU’s players into delirium.

The loss was obviously tough for Baylor coach Dave Aranda and his players to swallow after such an inspired effort.

“It’s a tough locker room,” Aranda said. “I told them that I wish that we, that I, could take the pain away. I wish you could say that you put together a great week and you bounced back from a hardship and put the pieces back together to fight for another day. You wish that it would all work out in the end. We all know that’s not the case.”

Duggan showed savvy in rallying the Horned Frogs to the win as he hit all the big passes and made the key run to put his team in scoring position. He finished 24 of 35 for 327 yards and a touchdown while leading TCU with 50 yards rushing and a touchdown on eight carries.

Tied 14-14 at halftime, the Horned Frogs took a 20-14 lead when Duggan hit Gunnar Henderson alone behind Baylor’s secondary for a 26-yard touchdown with 5:34 left in the third quarter. However, Kell clanked the PAT attempt off the upright.

The missed PAT allowed the Bears to grab a 21-20 lead when Baylor quarterback Blake Shapen hit tight end Kelsey Johnson with a 12-yard scoring pass followed by John Mayers’ extra point on the first play of the fourth quarter.

On Baylor’s next possession, Shapen made one of the biggest plays of the day when he found Monaray Baldwin over the middle on third-and-11. Baldwin took it to another gear and raced 74 yards to the 11 to set up Richard Reese’s one-yard touchdown run to open up a 28-20 lead with 9:47 remaining.

The Horned Frogs gave themselves a chance to rally when they drove 90 yards with Demercado scoring on a three-yard run with 2:07 remaining. But TCU’s two-point conversion attempt failed when Demercado dropped Duggan’s pass as the Bears hung on to a 28-26 lead.

But the Horned Frogs overcame the missed conversion by making the plays they needed in the closing seconds.

“It was a game of a couple of inches,” Lemear said. “That’s what makes it painful because you know where you’re supposed to be and you’re that close to making the play. To fall short really hurts, especially knowing what’s on the line with the seniors in their last game here.”

Picking up 319 first-half yards, the Bears managed just 14 points as Mayers missed a 46-yard field goal against the wind, a fourth down conversion attempt failed, and Shapen threw an interception on their last offensive play of the second quarter.

Baylor’s offense ate up TCU from the start by moving 76 yards on 11 plays on the opening drive. Fifty-six yards came on the ground with Qualan Jones blasting up the middle for a 10-yard touchdown.

After forcing TCU to punt, the Bears quickly drove 50 yards into scoring position again before stalling at the 28 where Mayers missed for the first time this season after nailing seven straight field goals.

TCU cranked up its offense on the next drive, showing quick-strike capability when Duggan spotted Quentin Johnston for 39 yards to Baylor’s 33.

Duggan completed the drive with a seven-yard touchdown run to pull into a 7-7 tie with 1:20 left in the first quarter.

Once again, the Bears had no trouble moving against the Horned Frogs as they raced 75 yards on nine plays for the second touchdown.

The biggest play was Shapen’s 42-yard pass to Josh Cameron down the left sideline to TCU’s 35 before Reese’s 15-yard run pushed the Bears to the 2.

Johnson did the rest from his tight end spot as he took a Shapen handoff and rolled around left end for the two-yard touchdown to give the Bears a 14-7 lead with 12:05 left in the second quarter.

It didn’t take long for the Horned Frogs to respond. Duggan found Barber alone behind Baylor’s defense down the left sideline for 82 yards to the 13. Kendre Miller rammed up the middle for a two-yard touchdown to give TCU a 14-14 tie with nine minutes left in the second quarter.

The Bears moved into TCU territory again, but on fourth-and-one at the 36, the Horned Frogs swarmed all over Williams on a pitch for a three-yard loss.

Getting the ball with 1:37 left in the first half, the Bears drove 77 yards to the 10. But TCU safety Bud Clark intercepted Shapen’s pass to Baldwin in the end zone for the touchback with four seconds left in the second quarter.

The Bears won’t have much time to dwell on the devastating loss since they face Texas in Austin at 11 a.m. Friday in the regular season finale.

TCU should go out and scoop up every lottery ticket it can find. 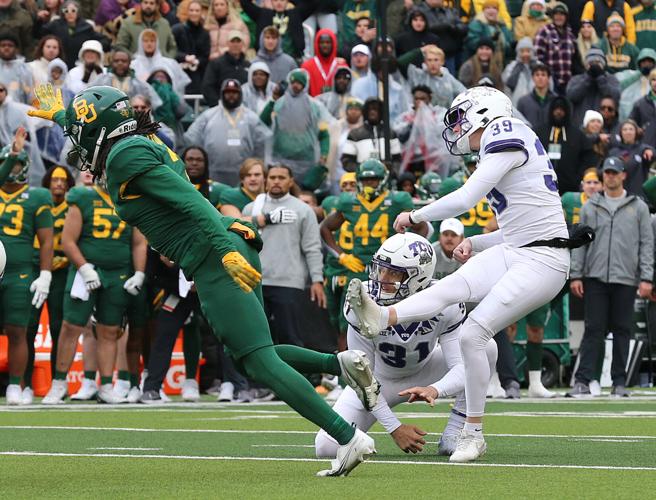 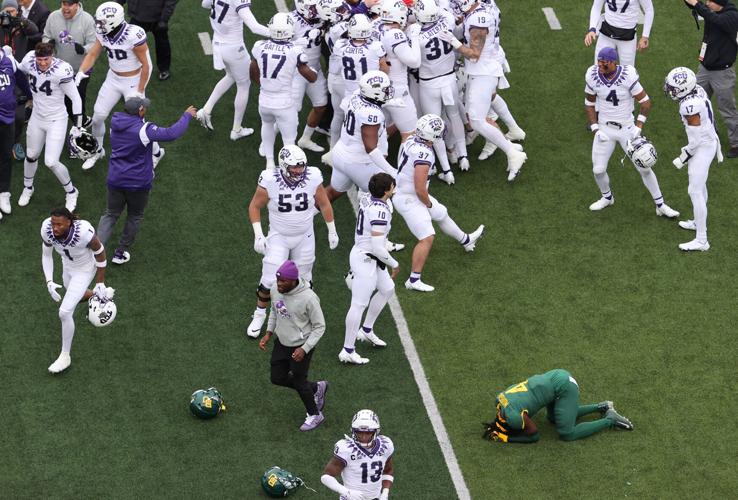 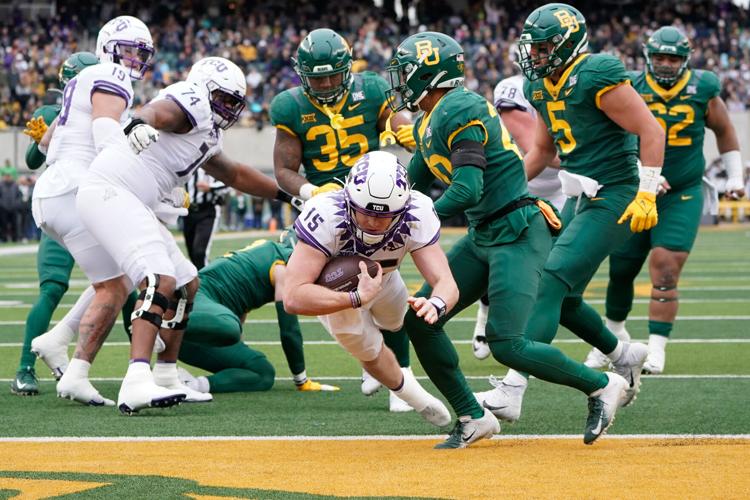 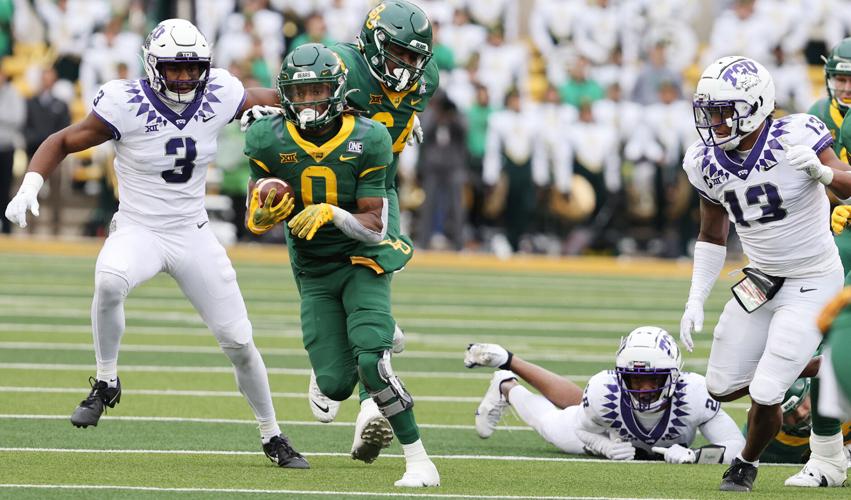 Baylor running back Craig Williams led all rushers with 112 yards on 19 carries. 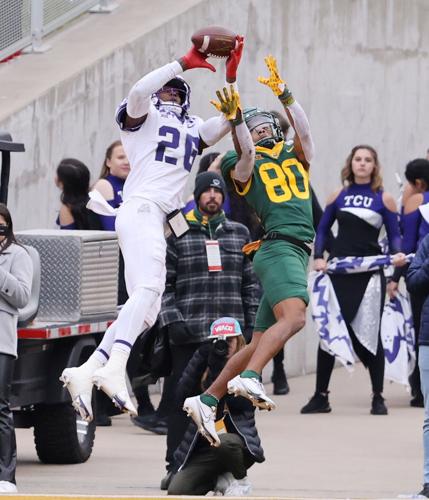 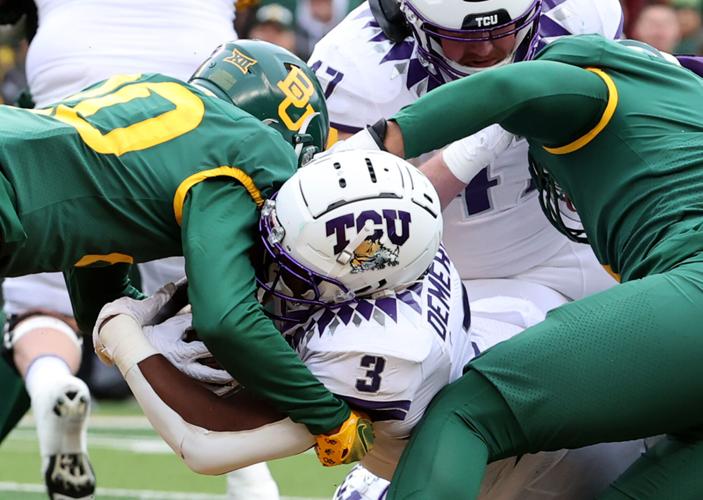