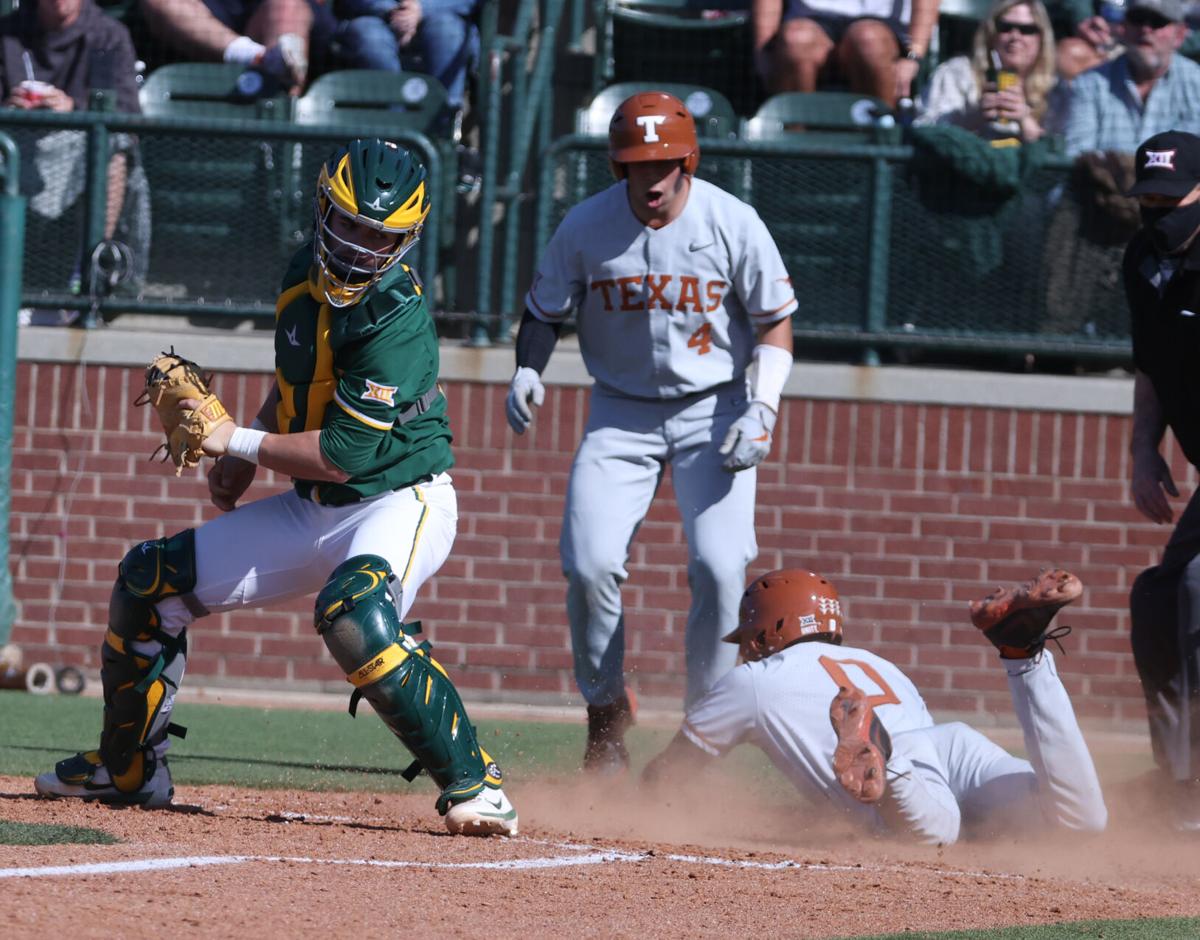 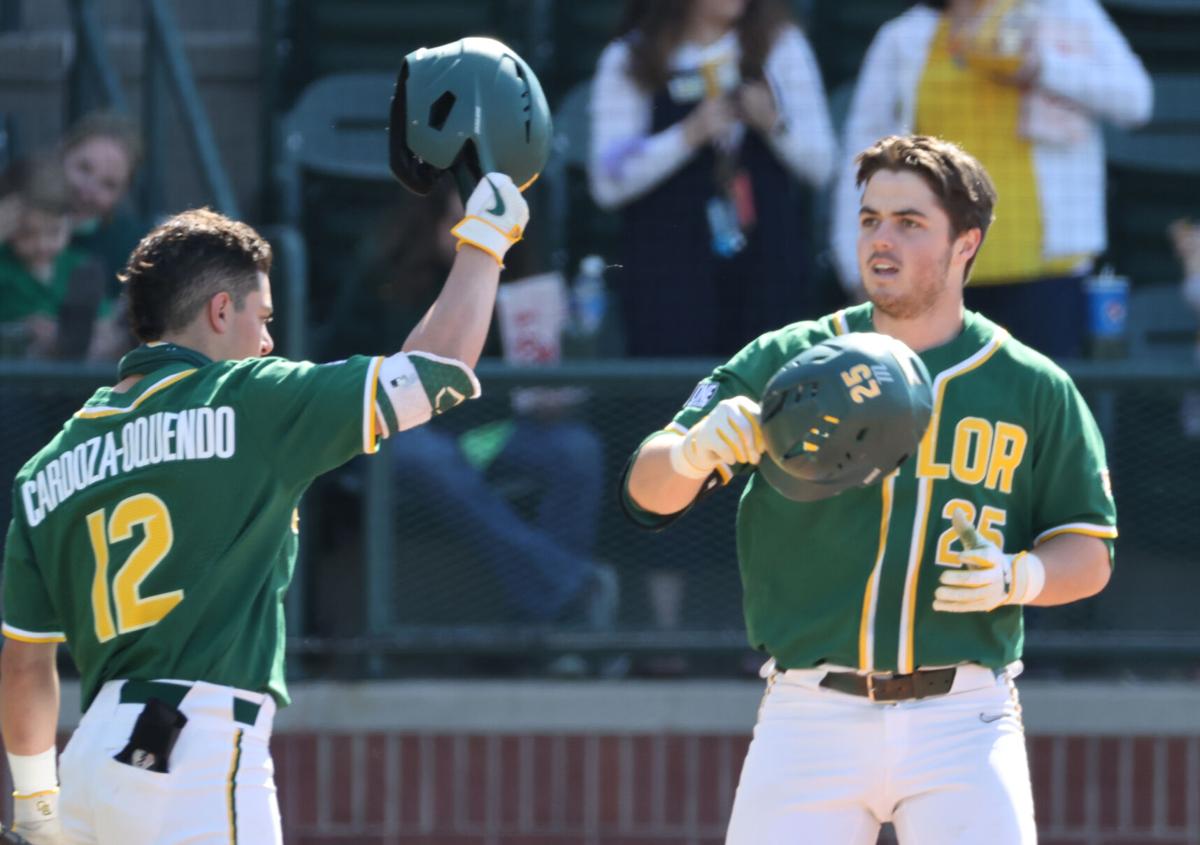 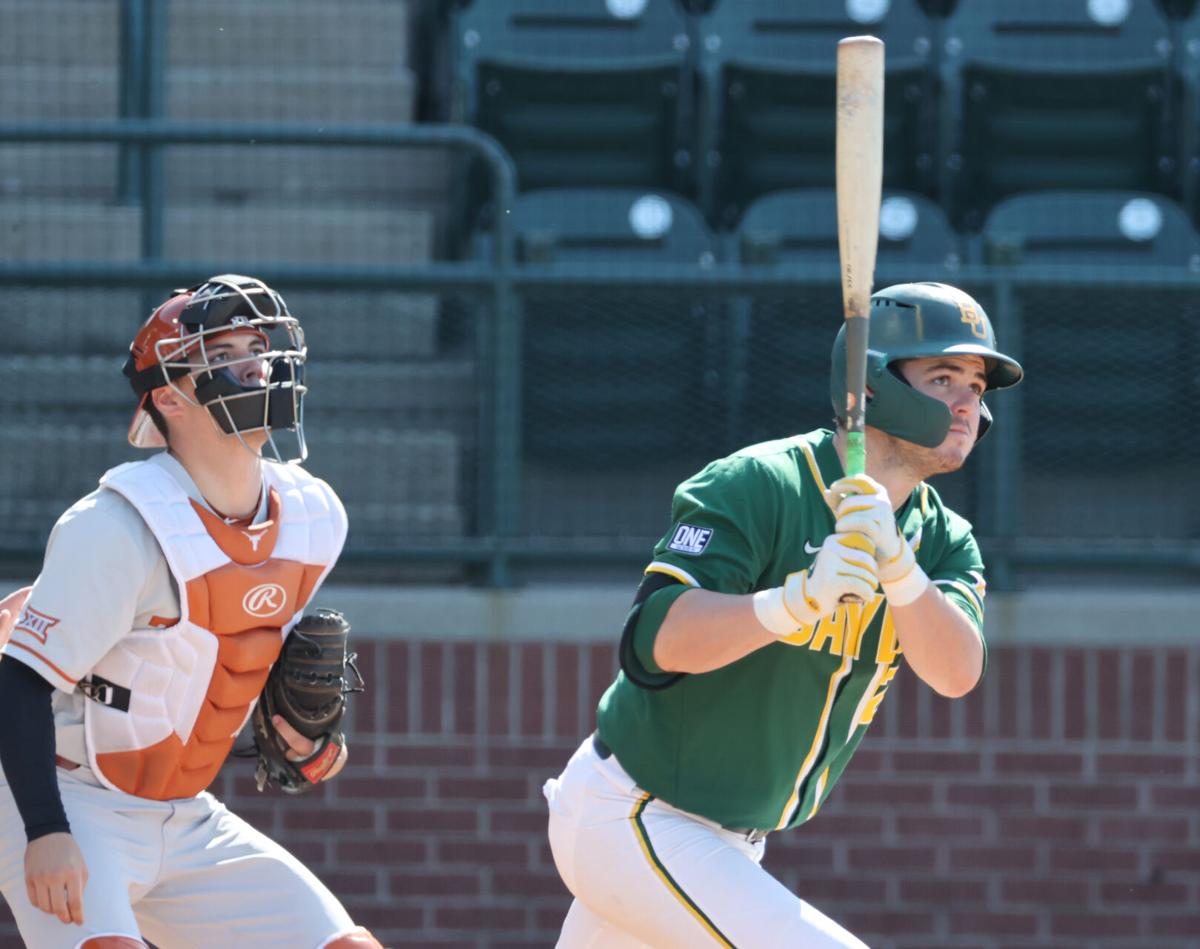 Baylor catcher Andy Thomas had three hits, including his fifth home run of the season. 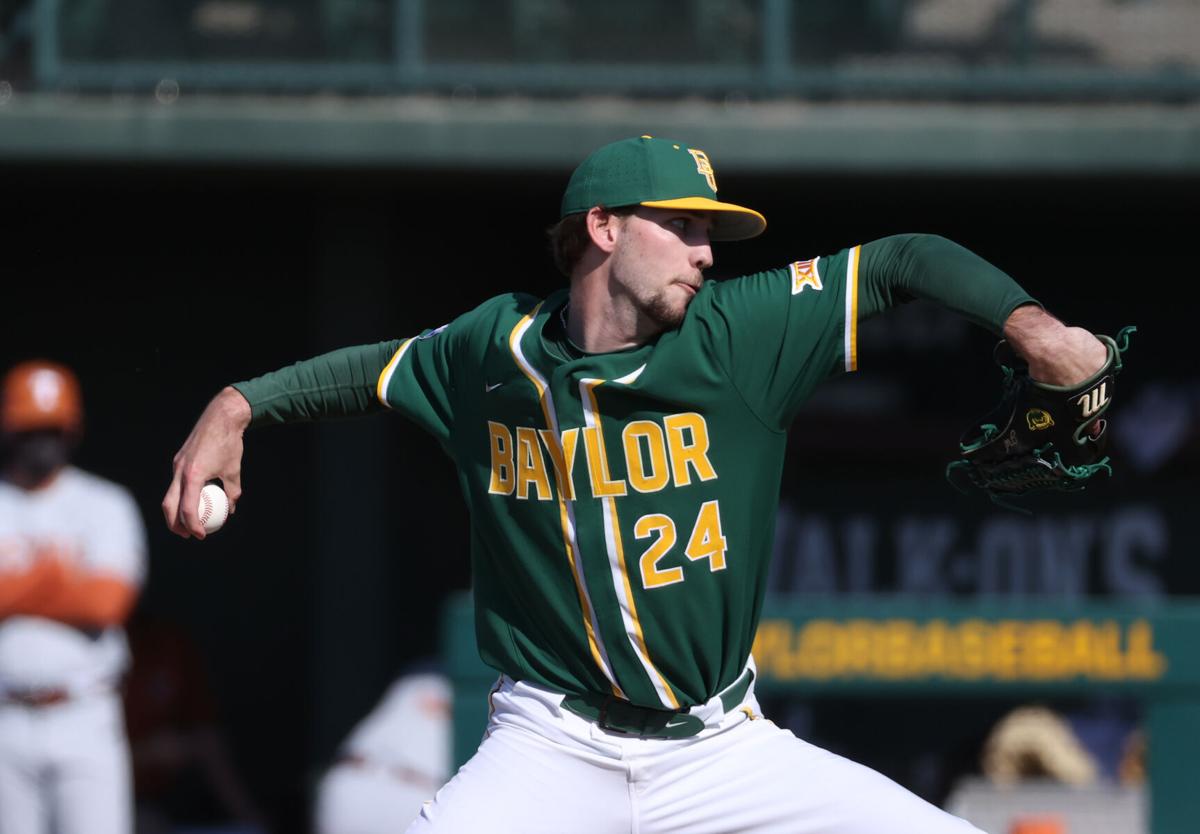 Baylor pitcher Jimmy Winston throws in relief against Texas. Winston took the loss to fall to 2-2. 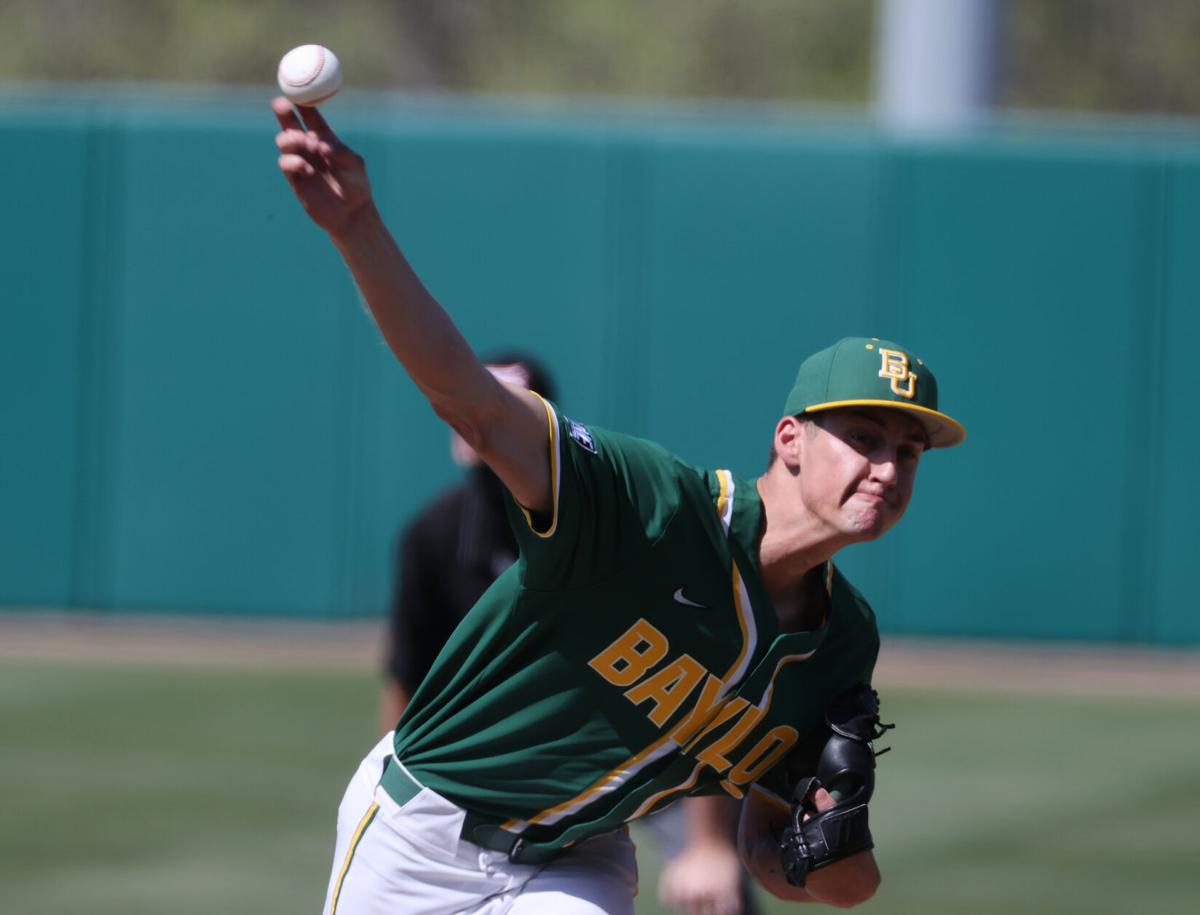 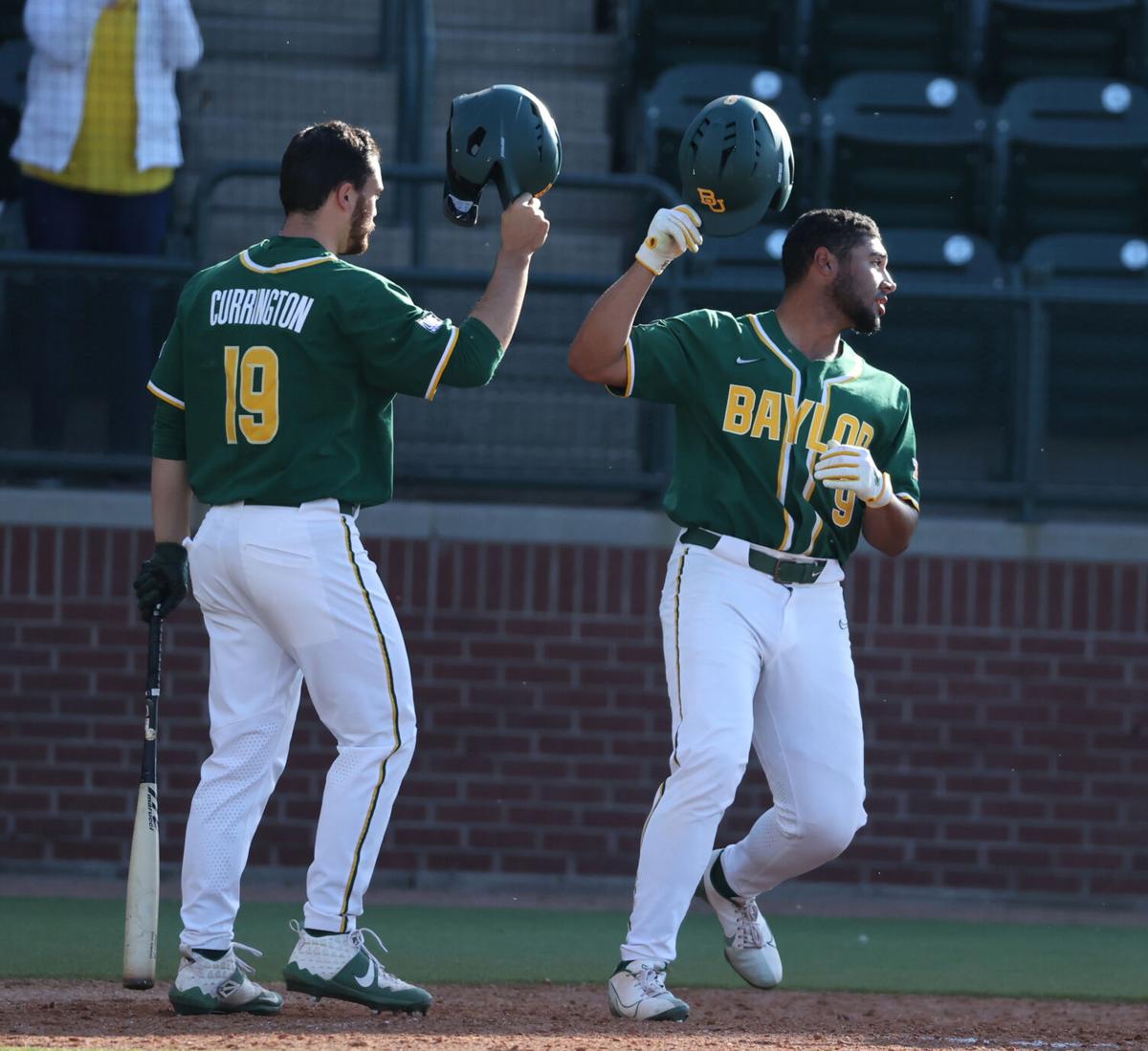 Killing rallies and muzzling Bears, apparently that’s what the Texas Longhorns came to Waco to do.

Baylor (12-6, 0-2), which entered the series on a 10-game winning streak, suddenly finds itself traveling the opposite direction. Meanwhile, the hurler-heavy Horns (14-5, 2-0) continue to stack up consecutive wins themselves, as they nabbed their eighth straight.

“It’s frustrating, two losses on games we’re right in,” Baylor senior catcher Andy Thomas said. “It’s good experience for our guys, but we’ve got to start winning those ones. Those are close ones that we need to come out on top of.”

For the second straight game, the Bears gave themselves a chance to walk away with a dramatic, bottom-of-the-ninth comeback win. Trailing 4-2 entering the ninth, Davion Downey put a charge into the home crowd when he spanked a solo home run over the left-field wall, his second homer of the season.

Downey said he initially read UT leftfielder Eric Kennedy’s body language and thought it might end up as a warning-track flyout. But the ball just kept carrying, despite Kennedy’s leaping effort at the wall.

“When I hit the ball, I saw the leftfielder camped under it and I was like, ‘Dang. Well, it is what it is,’” said Downey, who went 2-for-4 on the afternoon. “Then by the time I got to first he started running back. Then I was like, ‘Oh, it’s going. It’s going.’ It ended up going. But off the bat I was like, ‘Aw, dangit.’”

Following Downey’s bomb, pinch hitter Cade Currington grounded out for Baylor’s second out of the inning. Then Chase Wehsener went first pitch-hunting and walloped Nixon’s offering into the gap in left-center for a double. Again, the sizeable Baylor contingent — the university has opened up its venues to 50 percent capacity — rose to its feet, sensing a dramatic finish.

You couldn’t ask for much more if you were Baylor, with McKenzie trotting into the box. But Nixon used the hitter’s aggressiveness against him. McKenzie — who has described his hitting philosophy as “see ball, hit ball” — couldn’t get a bead on Nixon, who tossed three balls past BU’s swinging centerfielder for the final out.

“That’s what is great about baseball,” Rodriguez said. “You might struggle early, but then all of the sudden all you need is one hit, one great at-bat, and you can be the hero of the game. For me, I just like the way our guys competed. Once again, we have a great part of the order come up there with the tying run in scoring position, and just couldn’t get it done.”

For Nixon, it marked his second save in as many days.

The baseball axiom suggests that good pitching beats good hitting, and for the first two games of the series Texas has lent credence to the cliché. Though not by much.

The UT pitching staff came into this conference-opening series holding opposing batters to a .199 batting average. The Bears, on the other hand, ranked first in the Big 12 and third nationally prior to the series with a .346 team average. While Baylor was still able to crank out 10 hits in Saturday’s game, the Bears went just 2-for-10 (.200) with runners on base as opposed to Texas, which hit . 368 (7-for-19) in those situations.

“Early on we don’t execute with a guy on third base and less than two outs when all you need is a ground ball up the middle. We didn’t get that,” Rodriguez said. “Some other execution opportunities we weren’t able to do. Then once you get guys in scoring position, the two-out RBI is just key. You’ve got to find a way to put the ball in play and then let luck be on your side sometimes.”

Through the first four inning, the teams went tit for tat. The Longhorns promptly jumped on Baylor starter Blake Helton in the opening inning, as Kennedy blooped a one-out Texas Leaguer, then scored on Mike Antico’s deep double to right. Bam, just like that it was 1-0, Horns.

But Baylor bounced right back in the bottom of the inning. McKenzie led off with a single, and three batters later Thomas roped a double into the left-field corner, tying the game at 1.

In the fourth inning, UT’s Cam Williams prevented Helton from his first 1-2-3 inning by belting a two-out solo home run. Again, Baylor had an answer in the bottom of the frame, as Thomas tied the game with one swing of the bat. He turned on UT pitcher Tristan Stevens’ offering and pulled it over the right-field fence for his fifth homer of the season, bringing the score to 2-2.

“It felt great. The swing feels really locked in right now,” said Thomas, who went 3-for-4 with a pair of RBIs. “I feel like I’m handling the bat really well. It’s all nice and whatnot, but winning is the only category that matters. Right now we’re 0-2 in conference and that’s really frustrating. Stats are great, our team can hit and all that, but we need to win. That’s the category that matters.”

Jimmy Winston has excelled in a long relief capacity for Baylor thus far in 2021. The senior took over for Helton in the fifth and promptly delivered BU’s first three-up, three-down inning of the game, striking out the first two batters he faced.

However, it turned out to be a hit-or-miss day for Winston, and in the sixth Texas strung together the hits it needed. Winston opened the inning by registering a strikeout of cleanup hitter Zach Zubia. But then the Longhorns started teeing off on Winston, banging out five straight hits, including a two-run single from DJ Petrinsky. Winston eventually ended the inning with consecutive strikeouts, but the Longhorns had put the Bears in chasedown mode again.

This time the Bears didn’t have a bottom-of-the-inning response, as they stranded four runners the rest of the way.

Stevens (2-1) stood out as another quality arm in UT’s seemingly endless stable of them. The right-hander struck out six and didn’t walk a batter on his way to the win. Cole Quintanilla gave the Horns two scoreless innings of relief.

Winston (2-2) suffered the loss despite striking out six hitters over four innings, as he was undone by UT’s outburst in the sixth.

Sunday’s finale serves up another gunfight on the mound, as Hayden Kettler (1-0, 1.54) will take the hill for Baylor opposite UT’s strikeout machine Kolby Kubichek (2-1, 2.50 ERA, 12.5 Ks per nine innings). Even though things have not worked out the way they’ve wanted thus far, the Bears remain confident a turnaround is coming.

“It sucks we lost, but at the same time we’re going to click,” Downey said. “It’s going to happen. I’m not worried right now, not mad or anything. I know it’s just a matter of time and everything is going to click and we’re just going to get rolling nonstop. We’ll be very, very tough. That’s when I feel like we’re going to be fine.”

Baylor catcher Andy Thomas had three hits, including his fifth home run of the season.

Baylor pitcher Jimmy Winston throws in relief against Texas. Winston took the loss to fall to 2-2.