Former Midway star Jaxon Player can’t wait to put on his Baylor game jersey for the first time against Albany on Sept. 3.

Player was a Baylor fan long before the Bears moved from Floyd Casey Stadium to McLane Stadium in 2014. He’s loved Baylor football since he was a little kid.

“Yeah, it’s kind of crazy, because I still got posters,” Player said. “I have a picture from 2004 when I was at Floyd Casey, and I was watching the Baylor Bears play the Texas State team. And I was like, ‘Man, I’ve been loving Baylor since I was a kid, and now I finally get to rep the green and gold.’”

A former all-American Athletic Conference defensive lineman, Player decided to come back home to play his fifth season of eligibility. With Player in the mix, Baylor’s depth at noseguard rivals any team in the country.

Massive 6-4, 358-pound junior Siaki Ika is back after a first-team all-Big 12 season while sixth-year senior Chidi Ogbonnaya brings a ton of experience up front.

“It’s been awesome, it’s really good for us,” Ogbonnaya said. “We help each other every single day. Coach DJ (Dennis Johnson) was talking about the more depth we have, the better we’ll be in games and what-not.”

The 6-0, 299-pound Player brings some eye-popping credentials from Tulsa.

Since the 2020 season didn’t count against eligibility due to COVID-19 interruptions, Player took advantage of the extra year to realize his dream of playing for the Bears.

“It makes life a whole lot easier because I’m a big family guy,” Player said. “I come from a big family, and with my family being eight minutes away from me down the road, all my friends and family can come to the games. When I’m done with football for the day, I can go relax with them. It’s way better than being six hours away like I was.”

Of course, Player will have a lot of people asking him for tickets to Baylor games. But he’s devised a system.

Player transferred to Baylor in the spring to get a chance to learn defensive coordinator Ron Roberts’ system, and he believes he’ll hit the ground running in the season opener. Player has the versatility to move outside and play end when he isn’t playing noseguard.

“Oh yeah, it works out in my favor,” Player said. “I can play on third down and stop the run on first down. I can do a little bit of both. I’m very comfortable with the defense. I’ve got the hang of things. I’ve got great teammates who help me learn every day.”

With Ika plugging the middle and often occupying two blockers, the rest of the Baylor defenders often find open lanes to make tackles. Ika can also make a ton of plays on his own as he earned first team all-Big 12 last season after collecting 4½ sacks.

Like Player, Ika had to undergo a transition after transferring from LSU to Baylor last spring. He’s accelerated his learning curve by battling against Baylor’s veteran offensive linemen every day in practice.

“To be the best, you’ve got to get ready with the best,” Ika said. “I feel like day-in and day-out, we’ve got some dudes on the other side with a lot of experience, Jacob Gall, Grant Miller, Connor Galvin. They just bring it every day. We’ve got to match the energy. That’s the only way practice goes. (Dave) Aranda says time and time again the team is led by the front. So we’ve got to keep chugging.”

Similar to Player, the 6-5, 305-pound Ogbonnaya can play both noseguard and end and brings a lot of experience to the field. He’s excited about the depth up front with Ika and Player joining him in the rotation.

“I consider myself a versatile guy, so I feel like I can play anywhere,” Ogbonnaya said. “Coach wants to experiment with me outside and inside, and it’s been going pretty good. At the end of the day it’s just football. It’s a new technique, but with time and repetition you master technique and then you go from there.”

With the most experience on the squad, both Baylor’s offensive and defensive linemen are veterans leaders on the team, and they like it that way.

“Us and the O-line, we’re the oldest out of the entire team, and we’re going to have to lead from up front if we want to get to where we want to go,” Ogbonnaya said. “I think the biggest thing is maturity. The guys who are a lot older are going to make less mistakes, are going to do less bad things off the field.”

Player expects to see kids on game day lining the field much like he did many years ago. He wants to be an example for them of how vision and hard work pays off.

“If any kid asks, I’ll tell them my journey and tell them, ‘Hey, it’s a grind, but in the end, things work out for a reason,’” Player said.

Baylor, which won the league last season, was atop the poll with 17 of 41 total first-place votes and 365 points. 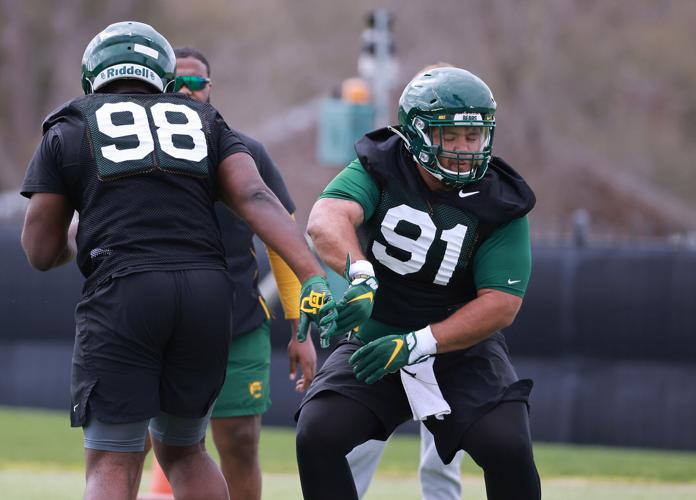 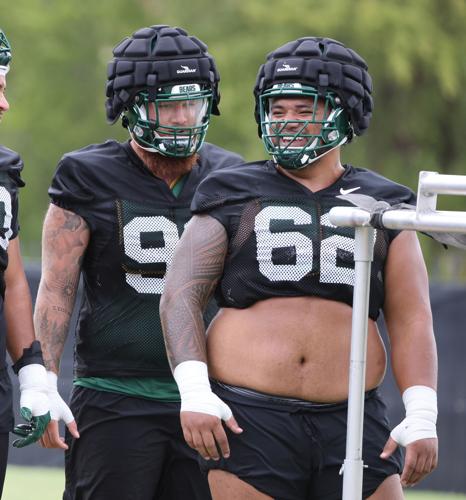 Coming off an all-Big 12 season, Baylor noseguard Siaki Ika is a force up front who often occupies two blockers. 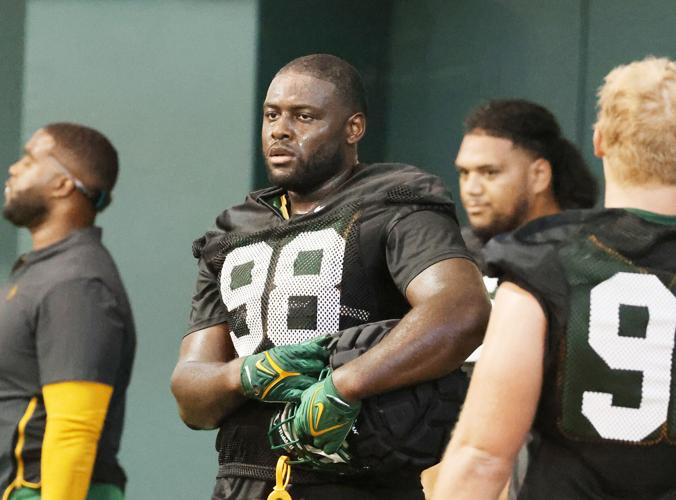 Chidi Ogbonnaya is a sixth-year senior who can play both nosetackle and defensive end.