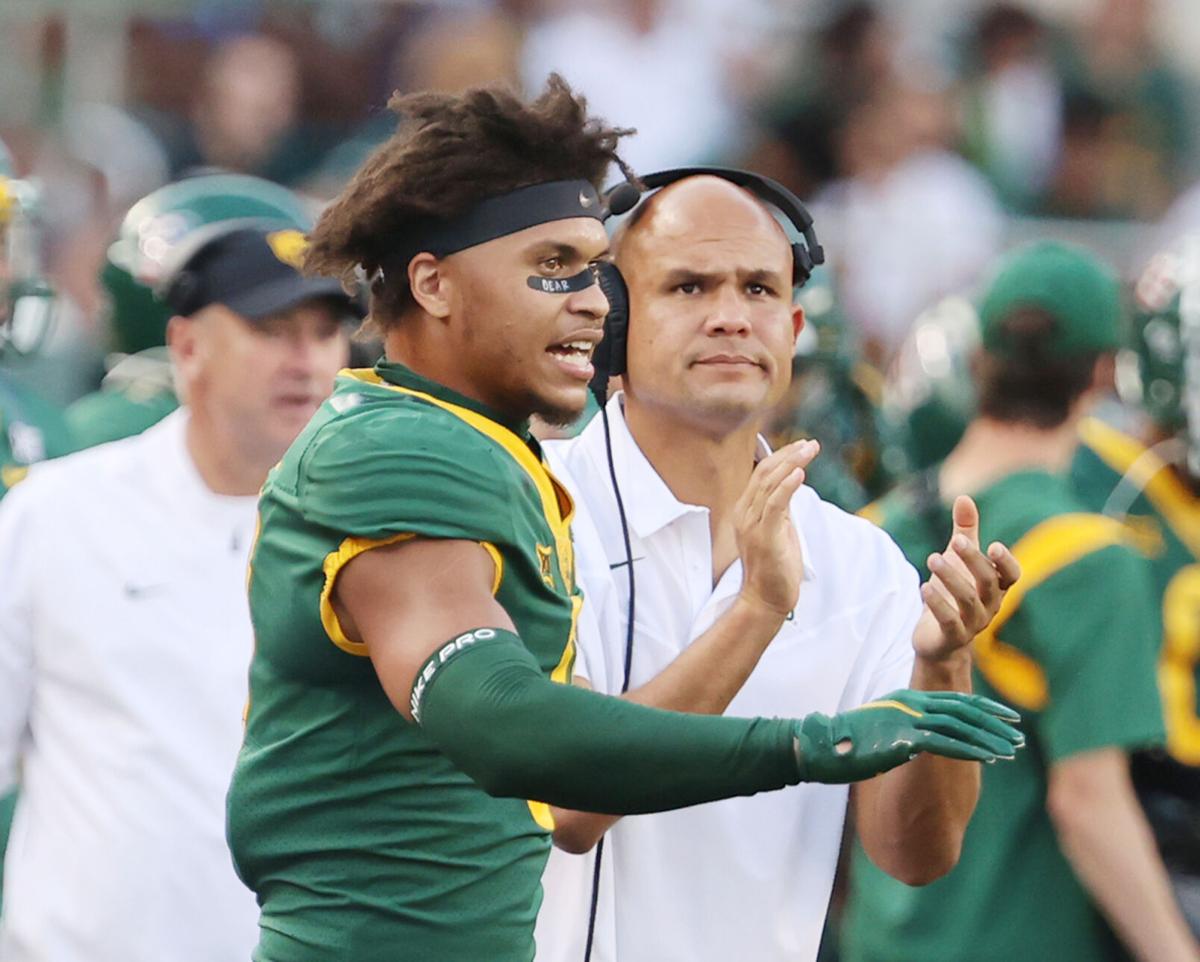 Beloved by Baylor fans for his loyalty to the program, fifth-year senior Jalen Pitre has grown from a good player into a Jim Thorpe Award finalist honoring the nation’s best defensive back. 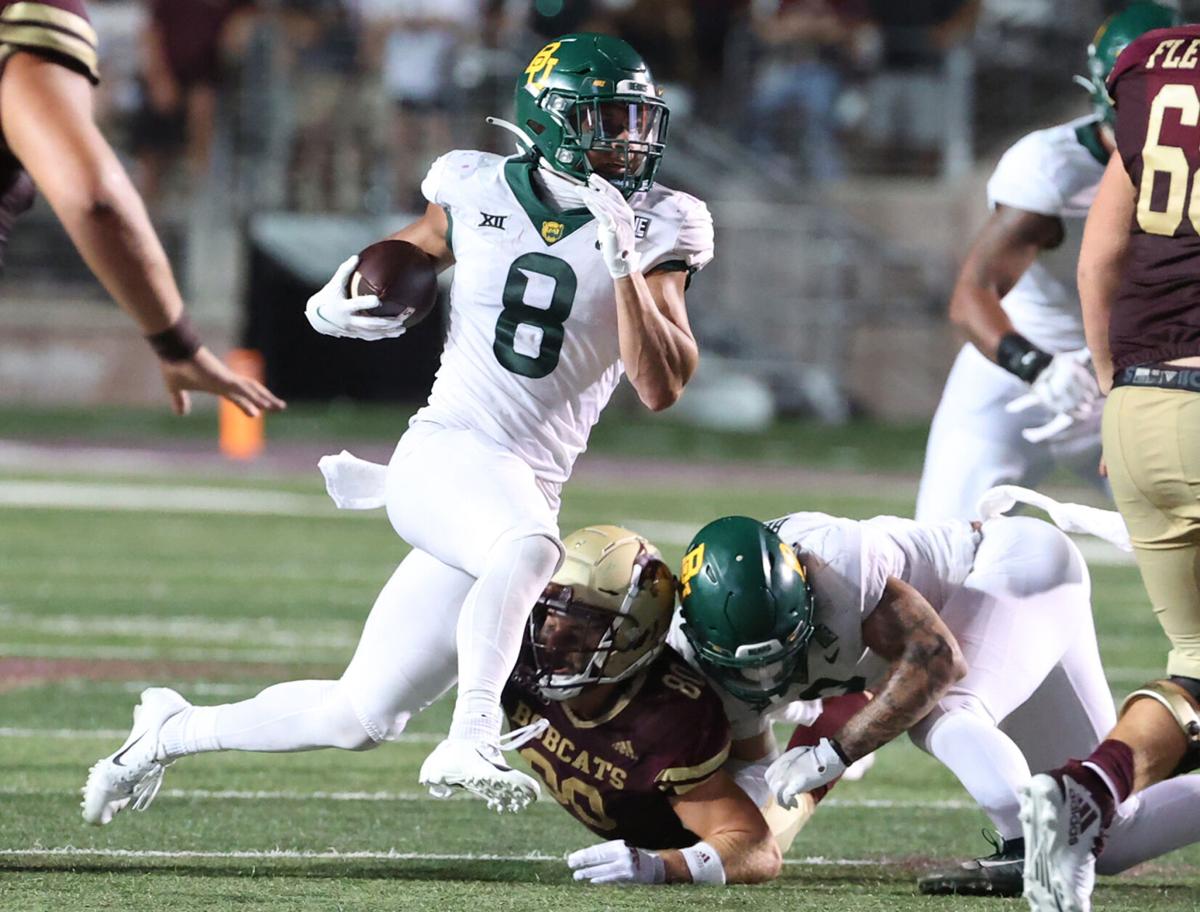 Baylor safety-linebacker Jalen Pitre has recorded a Big 12-high 15 tackles for loss while intercepting a pair of passes and forcing three fumbles this season.

Among the verbal commitments in the 2017 class, Pitre was the only one who stuck with Baylor during a chaotic time after coach Art Briles was fired in May 2016.

“I’m forever grateful for them being grateful for me,” Pitre said. “I look forward to playing my heart out every week for them. It’s something I wouldn’t trade for anything.”

Pitre had a bigger picture in mind than the other recruits who bailed amid Baylor’s sexual assault scandal. The Houston Stafford defensive back knew he could get a good education at Baylor, and he saw an avenue to grow as a player no matter who was leading the program.

Pitre’s loyalty has paid off in ways beyond he couldn’t have even imagined.

On Wednesday, Pitre was named one of three finalists with Cincinnati’s Coby Bryant and Oregon’s Vernon McKinley for the Jim Thorpe Award honoring the nation’s best defensive back.

After making all-Big 12 last year, Pitre has delivered an All-America type of season with 15 tackles for loss while forcing three fumbles and intercepting a pair of passes. The fifth-year senior could become the first Baylor player to win the Thorpe Award since safety Thomas Everett won the first in 1986.

“It means a lot,” Pitre said. “I’ve seen a lot of great players win that award and be up for that award. I can just remember being a big fan of LSU and seeing Tyrann Matthieu being up for that award. As a kid you don’t really think that’s possible. But now that you’re here and you see your name on that list it’s real.”

Pitre has made valuable use of his time at Baylor off the field as he earned his undergraduate degree in August 2020 and is working toward his master’s degree in educational psychology. When his playing career is over, he wants to be a college football coach and influence young players like his coaches have done for him.

The array of experiences Pitre has had at Baylor should serve him well.

Pitre played his first three seasons under Matt Rhule and the last two for Dave Aranda. He’s soaked in a variety of defensive philosophies from former coordinator Phil Snow and current coordinator Ron Roberts, and several other position coaches.

Pitre has twice seen how hard work and coaching vision can transform teams from losers to winners. After arriving at Baylor in 2017, Pitre saw Rhule’s 1-11 team develop into an 11-3 team in 2019 that reached the Big 12 championship game and made the program’s first Sugar Bowl appearance since 1957.

After finishing 2-7 in Aranda’s debut season in 2020, the Bears have transformed into a 9-2 team that has a shot to reach the Big 12 championship game on Dec. 4 at AT&T Stadium in Arlington with a win over Texas Tech and an Oklahoma State win over Oklahoma.

“It would be crazy to get back to there to the Big 12 championship my last season with all that we’ve been through as a senior class, all the things that we’ve seen to just get a shot to play in that game,” Aranda said. “I have faith in us and I think however it turns out we’ll be grateful. But we definitely want to play in that game, and that’s something we strive for each and every year.”

In everything the Bears have accomplished this season, Pitre has played a central role. As one of the Bears’ brightest leaders, he’s respected by everybody on the team, not only because he delivers on the field but also because his teammates know he’s going to do the right things off the field.

“The work he puts in after practice, before practice, the film study, the text messages, he’s a great football guy,” said Baylor safety Jairon McVea. “But he’s a great friend outside of football, too. He’s funny, he likes to mess around. He’s not just a brick-head who only talks about football. He’s a great teammate to have.”

When Pitre committed to Baylor in 2015 before his junior year at Stafford High School, he was an under-recruited defensive back trying to map out his future. Baylor stuck with him even after his junior season was cut short due to an ACL injury. He came back strong to collect 83 tackles and six interceptions as a senior.

Pitre didn’t just have an eye on his college football career. He wanted an experience at Baylor that could pay dividends for life.

“First off, I wasn’t heavily recruited,” Pitre said. “But I knew Baylor was a great school after talking with my parents. That was always a dream for us and for me to get a D-I scholarship. When I got that opportunity, I saw Baylor as a school that could offer great academics and play big-time football.

“Since I’ve been here I’ve been able to grow as a person. Spiritually it has been a huge jump for me. I think those are probably the big things I’m most grateful for be-cause those are things that are probably going to last the longest.”

Arriving at Baylor early in the spring of 2017, Pitre’s head was swimming as he tried to learn Snow’s extensive defensive playbook and make the switch to strongside line-backer. He started eight of Baylor’s 12 games and made 37 tackles, but mostly he was just trying to learn on the run among players who had much more experience.

“I was definitely learning on the run,” Pitre said. “I didn’t think I was ready, but I wouldn’t let anybody else know that. I was taking the opportunity and kind of going with it, just doing everything I could to make my coaches happy. Also with that, I felt I was learning a lot because I was messing up a lot, and I didn’t want to mess up any more.”

Pitre’s career didn’t follow an immediate upward trajectory. After starting just one game in 2018, he played in only four games in 2019 before deciding to redshirt and undergo shoulder surgery.

“They were tough, they did things right and they were all hungry and knew what to expect of each other,” Pitre said. “It’s hard to put any points on any defense that can do that. That’s something I try to model myself after and I look forward to seeing those guys on Sunday playing each and every week because I remember the work they put in when they were here.”

With experience playing both strongside and weakside linebacker, Pitre moved to the “star” position under Aranda as a fourth-year junior in 2020. The hybrid safety-linebacker position seemed perfectly built for Pitre’s skill set.

Pitre returned to the starting lineup regularly for the first time since his freshman year and delivered an all-Big 12 season as he collected a team-high 60 tackles with 13 for loss in nine games while becoming the first Baylor player to return two interceptions for touchdowns since 2012.

Combining highly developed instincts with greater defensive knowledge, Pitre has constantly lived in opponents’ backfields this year. Roberts loves to send Pitre on blitzes because he knows he can knife around blockers and throw quarterbacks and running backs for losses.

Pitre understands that if his teammates perfect their assignments, he has a better shot of making a big play.

“I try to work on my moves, but also understanding the plays that are going to be thrown at us each and every week,” Pitre said. “A lot of stuff that a lot of people don’t see has to do with my teammates and the way they allow me to play free and give me the confidence to play a lot faster and execute the plays. I give them a lot of credit for those 15 tackles for loss. It’s probably 30 percent me and 70 percent them to be honest.”

Pitre’s teammates are constantly inspired by him. They see a guy who’s well prepared, studies film like he’s cramming for a test, and then throws his 6-0, 197-pound body around against much bigger guys.

“What don’t I see?” said Baylor tight end Ben Sims. “Man, tough, hard-working competitive dude. He brings it every single day. He plays for his teammates. If I’m ever in need to talk to somebody, he’s there for me. He sets a good example for the younger guys.”

Aranda likes that Pitre is always looking to learn and find ways to improve no matter how well he’s played. He’s watched Pitre adapt his game to fit Baylor’s defense.

“Jalen has matured his playing style to fit the scheme,” Aranda said. “And I think it’s difficult to do, because I think when you’re on a team, you have to take a little bit of yourself and sacrifice it for the team. And it’s hard to do, especially when there’s a fair amount of tape from last year where if Jalen didn’t make a play, there probably wasn’t anyone that was.”

Baylor’s defense has developed into one of the best in the Big 12, and is a big reason why the Bears are in the championship game race. With veterans like linebackers Terrel Bernard and Dillon Doyle and safety JT Woods surrounding him, it’s a joy for Pitre to work in unison with them on Saturdays.

“When you understand what each other’s doing and you’re playing tough and hard and physical, it’s hard to be beat,” Pitre said. “It’s very similar to the 2019 team as well in that we play hard, play physical, and we’re trying to get turnovers. It’s just fun to go out and play with those guys each and every week.”

Saturday’s regular season finale against Texas Tech will be Pitre’s last game at McLane Stadium. It will likely be emotional for him, but also for the fans that see him as the recruit who stuck with the Bears when everybody else bailed.

Beloved by Baylor fans for his loyalty to the program, fifth-year senior Jalen Pitre has grown from a good player into a Jim Thorpe Award finalist honoring the nation’s best defensive back.

Baylor safety-linebacker Jalen Pitre has recorded a Big 12-high 15 tackles for loss while intercepting a pair of passes and forcing three fumbles this season.