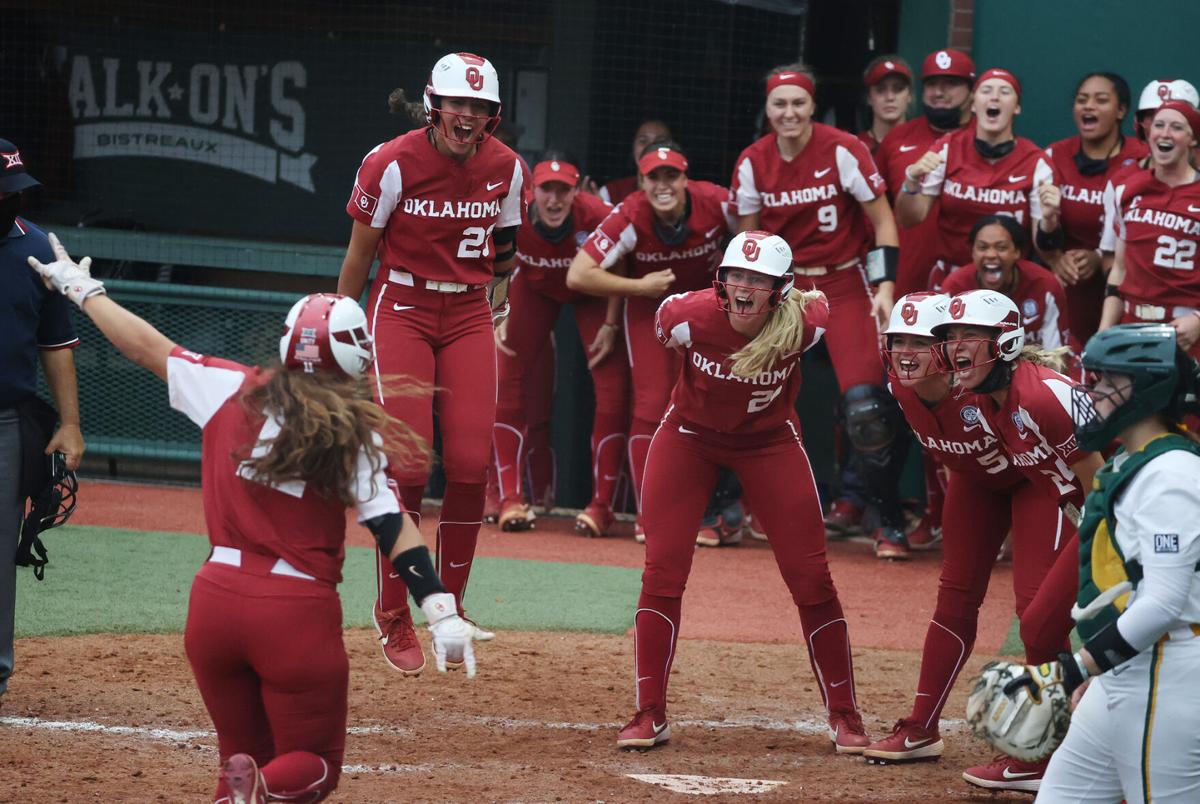 Oklahoma’s Nicole Mendes reacts to her grand slam against Baylor in game one of the top-ranked Sooners’ sweep. 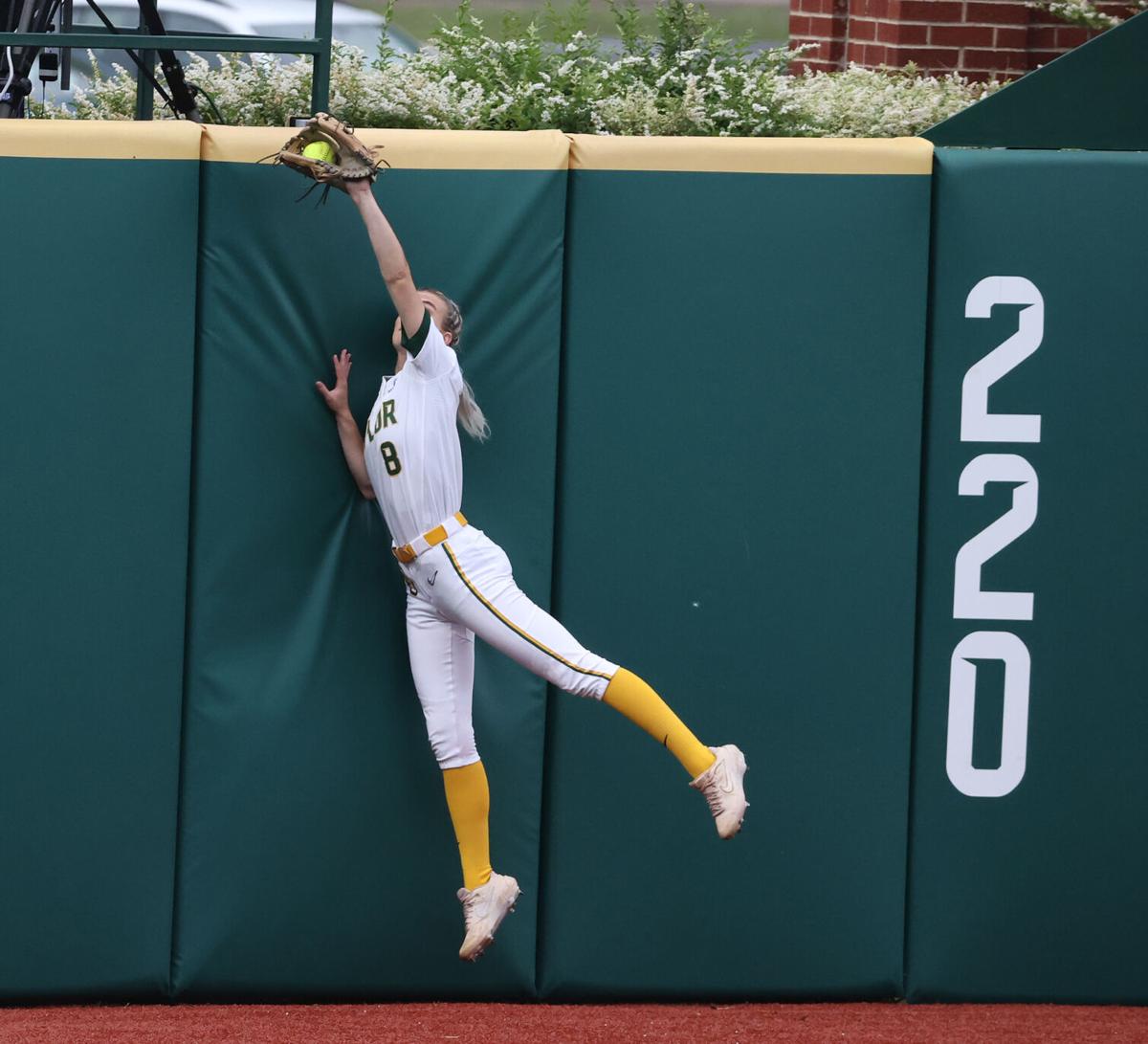 Baylor outfielder Hannah Smith leaps against the wall to rob Oklahoma of a potential home run in the first game on Tuesday. 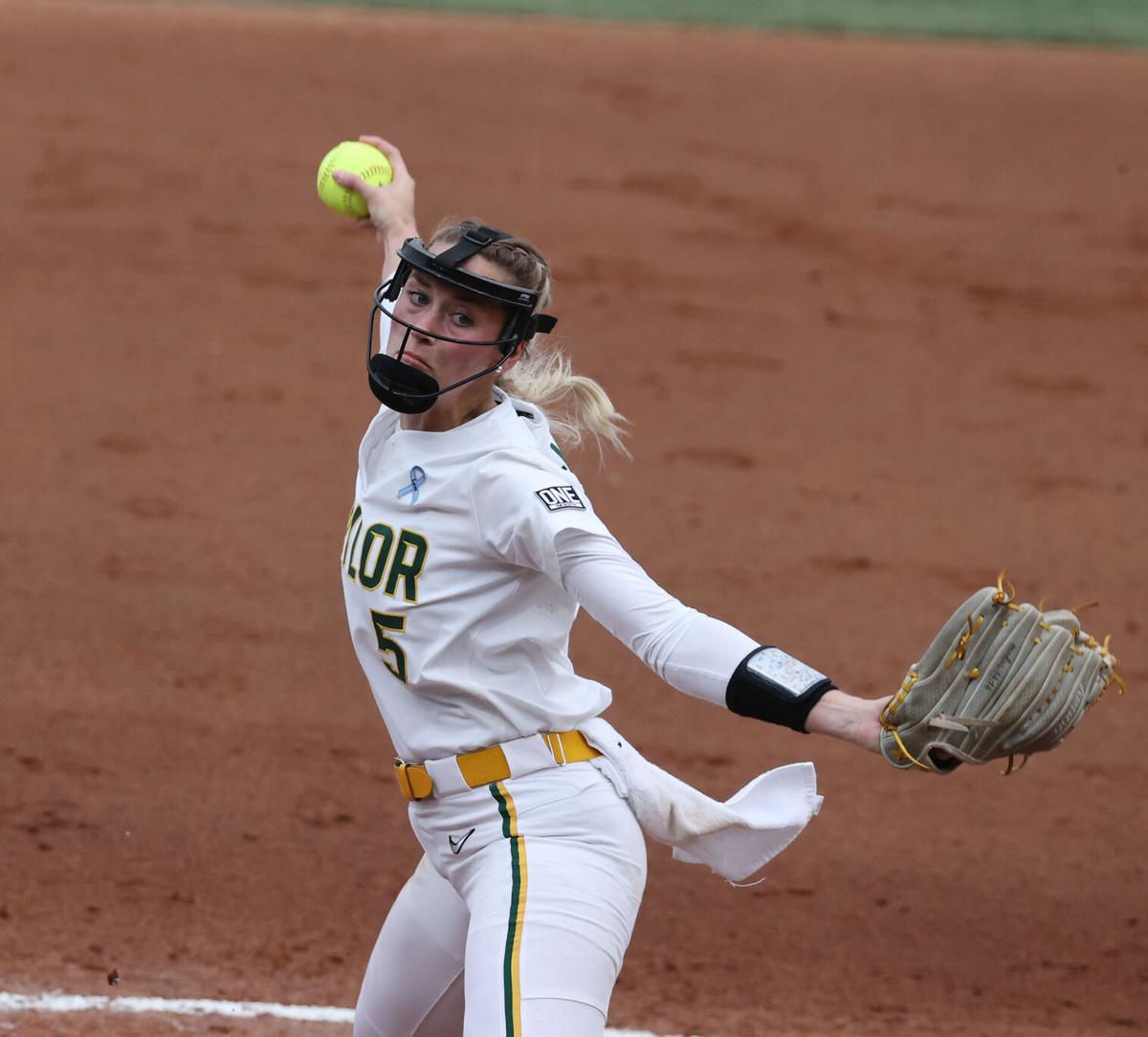 Baylor pitcher Sidney Holman-Mansell winds up to throw in the Bears’ second game. 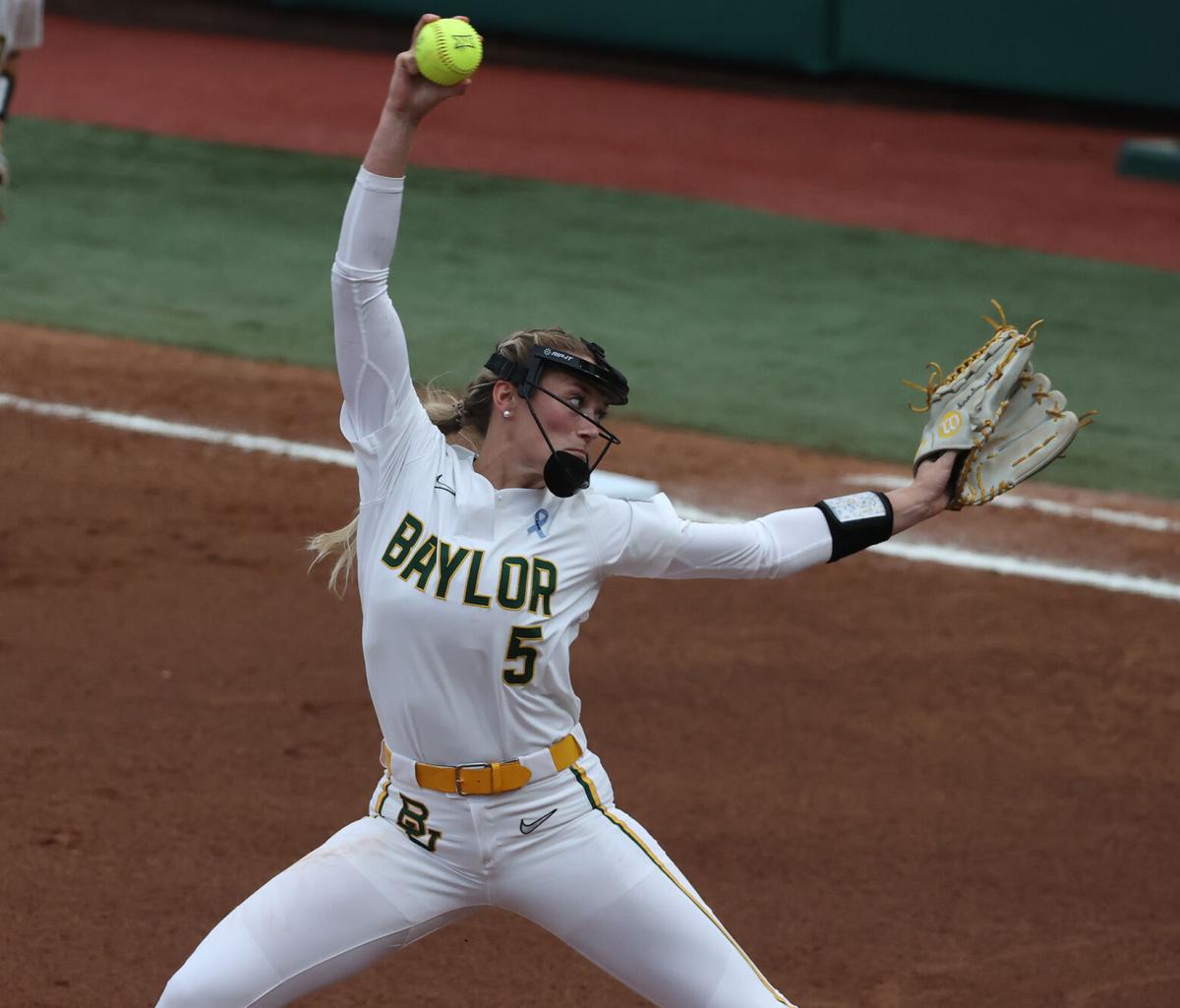 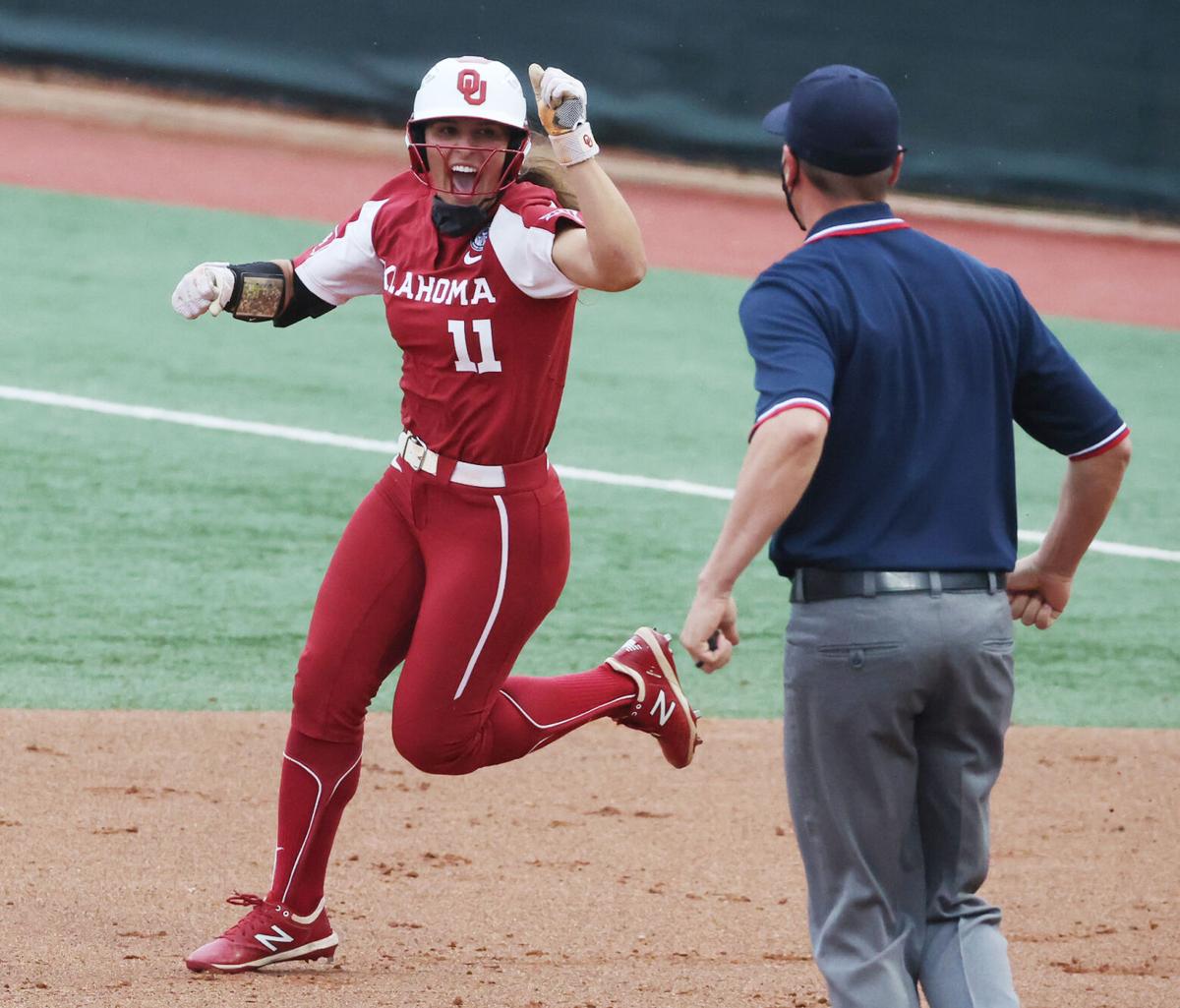 Oklahoma` Nicole Mendes reacts to her grand slam against Baylor in game one. 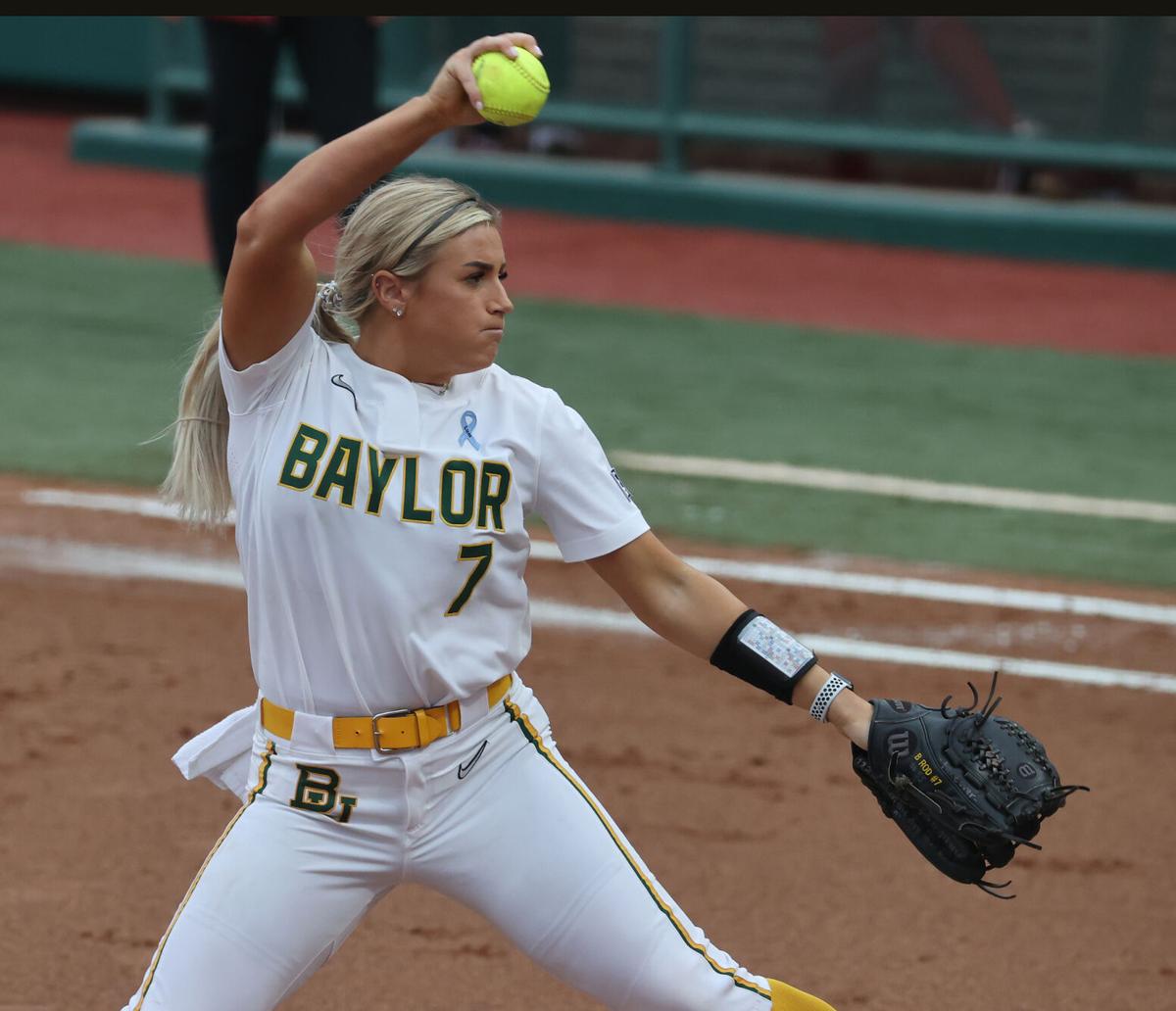 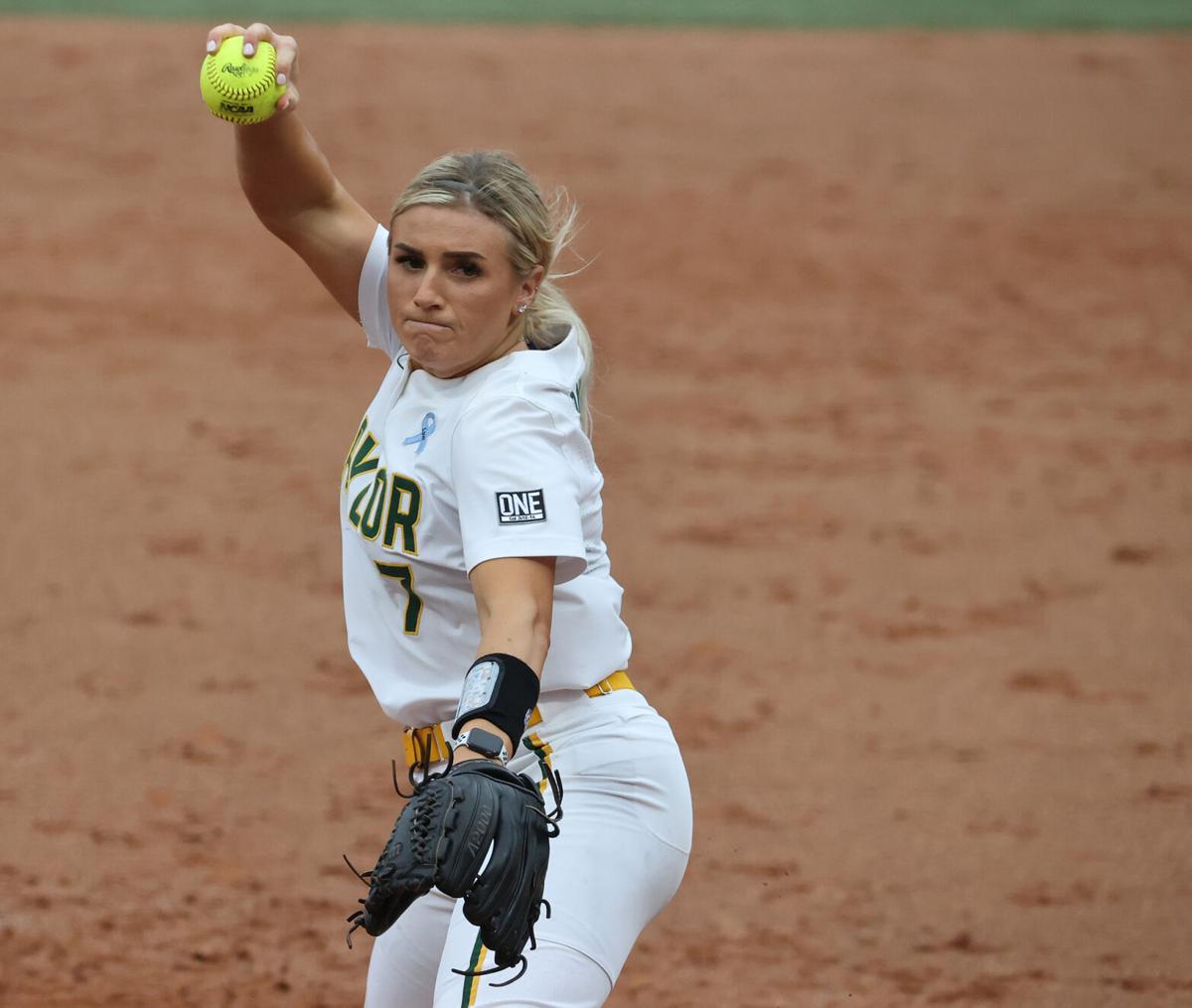 Whether No. 1 Oklahoma goes deep or chips away, its relentless offensive attack might be the most feared in college softball history.

The Sooners showed their muscle in the opener as Nicole Mendes, Jocelyn Alo and Tiare Jennings blasted homers in a 7-1 win over Baylor.

Oklahoma changed tactics in the second game, attacking with singles and walks to complete the doubleheader sweep with an 11-0 run-rule win in six innings Tuesday night at Getterman Stadium.

With the three opening-game homers, the Sooners (39-1, 14-0) have now amassed an NCAA-leading 114 homers. But for the first three innings, they couldn’t manage a hit off Baylor ace Gia Rodoni (9-7).

“I was really proud of the way we came out in the first game,” said Baylor coach Glenn Moore. “Lots of energy. We looked like we really wanted to attack them and not just bow down to the No. 1 team in the country. Gia pitched as well as she has all year, and that’s certainly a bright spot.”

Meanwhile Baylor played tremendous defense as second baseman Emily Hott made a leaping catch of Jana Johns’ fly in the second inning and Gilbert made a diving catch of Alo’s laser to left field in the third.

“My defense was playing lights out, so kudos to them for keeping the game as close as it was in the beginning,” Rodoni said. “They saved me multiple hits.”

The Lady Bears had a chance to stretch their lead in the third after Gilbert led off with a triple past diving leftfielder Jayda Coleman. But Jennings threw out Gilbert at home from second base after fielding Hott’s grounder.

Goose McGlaun followed with a double to left field, but Hott was thrown out at the plate to deny the Lady Bears again.

“I’ve always been aggressive in sending runners,” Moore said. “I thought we needed to do that. I don’t regret it. We could have gone up 3-0 at that point in time.”

The Sooners loaded the bases in the fourth as Coleman singled, Taylor Snow reached on an error and Johns walked with two outs.

Mendes then yanked Rodoni’s first pitch over the right-field fence for a grand slam to give the Sooners a 4-1 lead.

Alo opened the fifth with her 25th homer of the season over the center-field fence before Jennings blasted a two-run shot to right-center in the sixth. Baylor outhit the Sooners 5-4, but couldn’t overcome the Sooners’ prodigious power.

“You have to be on your game,” Rodoni said. “If not, they’re going to make you pay for it. This is just a mental game that you have to be prepared for going into it, just knowing that they’re going to be a tough team to play. Having faced them in the past, I’ve gone through it before, I know one through nine is solid and they’re not going to give you a break.”

Holman-Mansell (7-4) walked Jennings to open the game before Alo singled. Lynnsie Elam followed with a run-scoring single and Kinzie Hansen hit a sacrifice fly to give the Sooners a quick 2-0 lead.

After Coleman and Mackenzie Donihoo walked to open the second, Snow singled to load the bases. Following Jennings’ run-scoring single, Alo delivered another run-scoring single off reliever Aliyah Binford. Grace Lyons pushed across the third run of the inning with a sacrifice bunt.

Trailing 7-0, Baylor had a chance to cut into the lead in the fourth when Gilbert walked and Hott and Ellis singled to load the bases with one out. But Saile escaped the jam by striking out Binford looking before forcing Hannah Smith to pop up to end the inning

With Johns ripping a two-run single, the Sooners tacked on four more runs in the sixth.

The Lady Bears will return to Big 12 action Friday through Sunday with a three-game series against Kansas at Getterman Stadium.

Versatile Taylor Ellis does it all for Baylor Lady Bears

A decade ago, Baylor coach Glenn Moore was watching Midway play a World Series softball game when the shortstop caught his eye.

New Baylor women’s basketball coach Nicki Collen is bringing back one of the Lady Bears biggest stars in her third staff addition of the week.

Confidence may be even more contagious than the coronavirus, and certainly more appealing.

Bears ring up 17-run inning in pummeling of Kansas State, 23-3

On a day reserved for moms, Baylor’s baseball team showed it was one tough mutha.

Oklahoma’s Nicole Mendes reacts to her grand slam against Baylor in game one of the top-ranked Sooners’ sweep.

Baylor outfielder Hannah Smith leaps against the wall to rob Oklahoma of a potential home run in the first game on Tuesday.

Baylor pitcher Sidney Holman-Mansell winds up to throw in the Bears’ second game.

Oklahoma` Nicole Mendes reacts to her grand slam against Baylor in game one.