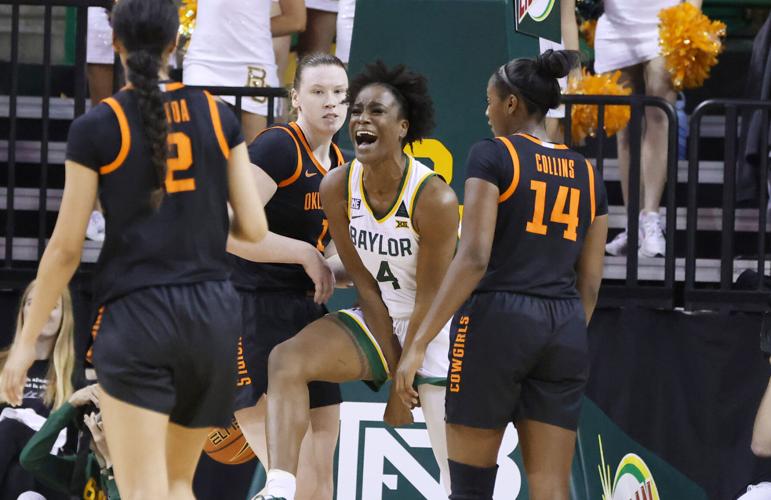 Baylor center Queen Egbo reacts to a play against Oklahoma State in the first half of the Bears’ victory on Wednesday night at the Ferrell Center. Egbo scored 19 points and surpassed 1,000 points for her career. 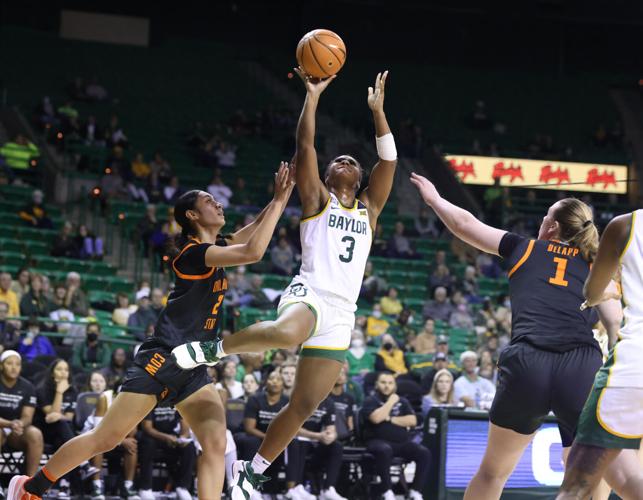 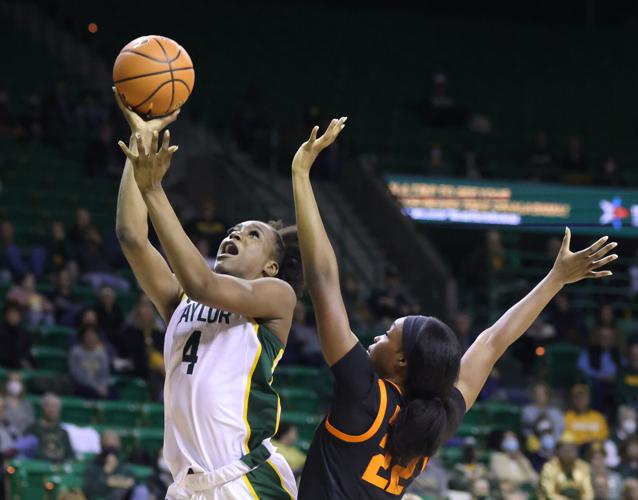 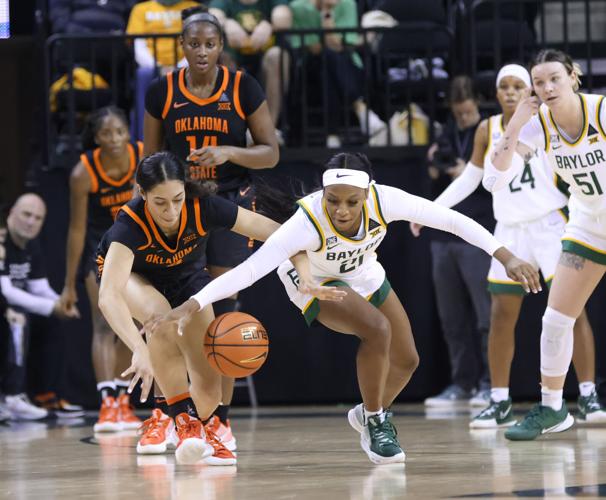 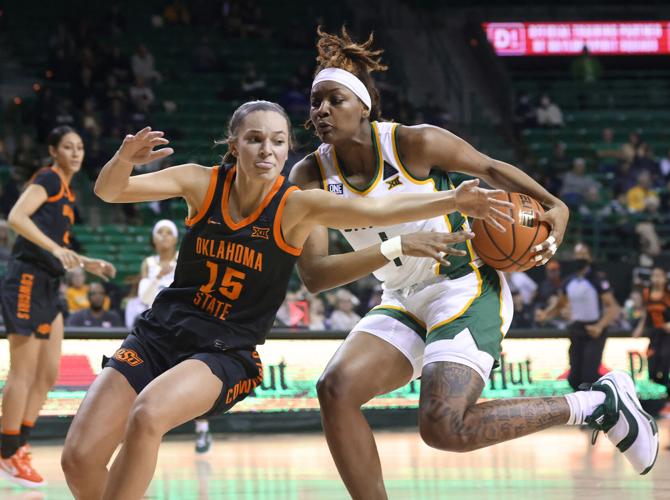 The 15th-ranked Bears made the gritty plays, if not all the flashy ones, and stomped Oklahoma State, 67-49, on Wednesday night at the Ferrell Center.

Baylor center Queen Egbo surpassed 1,000 career points as she filled up the basket in the first half. Then the Bears guards took over after the break, getting into the lane for a series of layups.

With that, Baylor (11-4, 2-2 Big 12) erased the deficit it faced after losing its first two conference games in road battles at Kansas State and Oklahoma. The Bears used a desperate last-minute comeback to defeat Kansas on Sunday, but they needed nothing of the sort against the Cowgirls (6-9, 1-5).

“I feel like we just were on the same page today coming off a big win from Kansas,” Egbo said. “We kind of knew what we wanted going forward and we came and we played like that today.”

The Bears started the third quarter on an 8-2 run to push ahead by 16 points and let defense and rebounding take over after that. Baylor held Oklahoma State to nine points in the third quarter, creating a hole the Cowgirls couldn’t escape.

Egbo finished with 19 points and eight rebounds. NaLyssa Smith turned in another double-double with 16 points and 13 rebounds.

“You’ve got to adjust to your competition,” Smith said. “The way they were playing us, we knew we could pound it inside, so that’s what we did.”

Bears guard Jordan Lewis scored 11 of her 13 in the second half and also finished with seven assists.

After tossing in 14 3-pointers in the win over Kansas, Baylor didn’t hit a trey until midway through the fourth quarter. With Oklahoma State applying pressure outside of the 3-point line, Bears coach Nicki Collens said it was a night for guards to run toward the rim.

“I had a good meeting with Jordan Lewis yesterday because she’s lost some of her aggressiveness the last few games,” Collen said. “Tonight you saw the Jordan Lewis we saw early in the season.”

Oklahoma State was playing without leading scorer Lauren Fields, who had to sit out because of Big 12 COVID-19 health and safety protocols. Cowgirls Taylen Collins and Lexy Keys each scored 16 points, but Oklahoma State didn’t get much consistent scoring anywhere else in the lineup.

Baylor established a double-digit lead with a 13-2 run that extended from the end of the first quarter well into the second.

After Oklahoma State pulled even at 12-12 on a jumper by Kassidy De Lapp, Baylor scored six unanswered points in the final 3:49 of the opening period.

Egbo, who led the Bears with 17 points in the first half, made a mid-range shot and a couple of free throws to help Baylor go to the second quarter with an 18-12 advantage. Egbo went 9-for-9 from the free-throw line in the first half.

“That’s the Queen we need every game,” Collen said. “Look at Queen’s career. I don’t want to say I’m the difference maker because she’s had strings in the past where she’s put together three or four games that make her look like a top-five pick and then she kind of disappears. That’s my challenge to her: to bring that every night.”

Oklahoma State clawed back within 10 when Neferatali Notoa tossed in the only 3-pointer by either team in the first half, cutting Baylor’s advantage to 25-16. Keys made a layup for the Cowgirls 15 seconds before intermission that sliced the Bears’ lead to eight at the break.

Smith had nine points in the first half as she and Egbo were the only two Bears with more than two points going to the locker room.

Keys and Collins each put in seven points for the Cowgirls, who shot 45% from the field in the first half.

Prior to Wednesday’s game, Baylor coach Nicki Collen presented graduate transfer guard Ja’Mee Asberry with a basketball commemorating Asberry’s 1,000th career point. Asberry scored 873 points at Oklahoma State before transferring to Baylor and had scored 149 for the Bears leading up to the Oklahoma State game.

Stick and stay: Pitre's Baylor journey prepared him well for next step with Texans

No need checking for a pulse — the Baylor Bears are alive and well.

It’s college softball’s version of the NIT on a smaller scale.

New York coach Sandy Brondello was on her way to her team's Friday morning shootaround when she heard the "disappointing" news that Russia had extended Brittney Griner's pre-trial detention another 30 days.

Baylor center Queen Egbo reacts to a play against Oklahoma State in the first half of the Bears’ victory on Wednesday night at the Ferrell Center. Egbo scored 19 points and surpassed 1,000 points for her career.