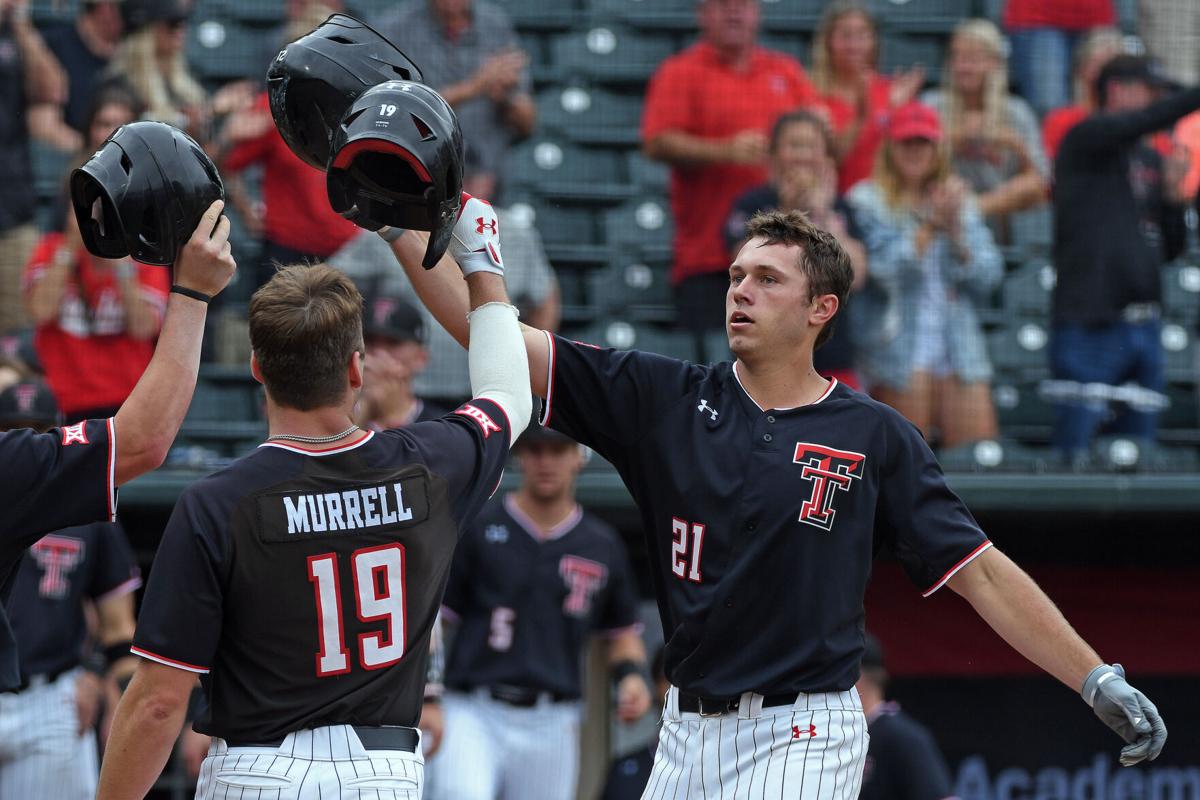 Texas Tech’s Nate Rombach (right) gets a hero’s welcome at home plate after banging a two-run home run in the fourth inning in the Red Raiders’ 11-4 win over Baylor Wednesday at the Big 12 tournament in Oklahoma City. 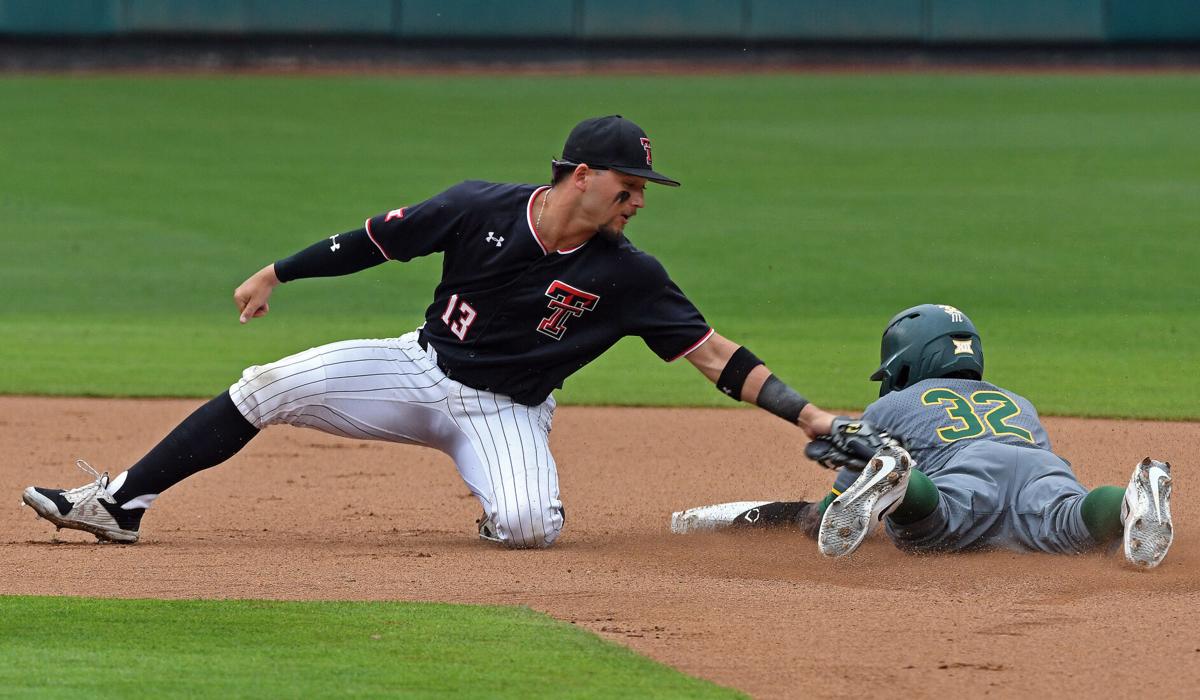 Baylor's Tre Richardson slides in safely ahead of the tag from Texas Tech's Cal Conley in the Bears' 11-4 loss to the Red Raiders on Wednesday in Oklahoma City. 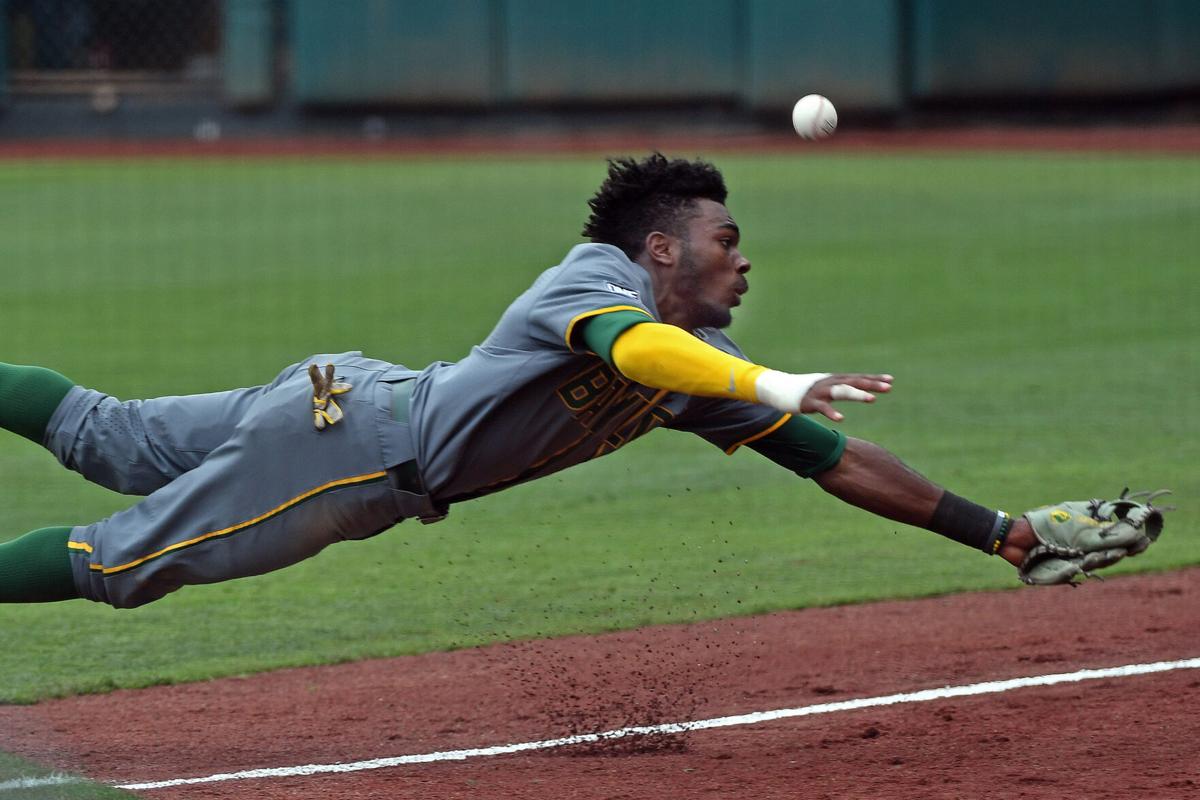 Baylor's Tre Richardson dives for a foul ball in the Bears' 11-4 loss to Texas Tech. Richardson didn't come up with the catch.

OKLAHOMA CITY — This one was over by breakfast.

Third-seeded Texas Tech thumped out to a quick lead in its early-morning meeting with sixth-seeded Baylor and smacked the Bears, 11-4, in the teams’ opener in the Big 12 Baseball Tournament on Wednesday at Chickasaw Bricktown Ballpark.

It wasn’t the way the Bears (31-19) hoped to impress the NCAA tournament committee. Freshman Cam Caley lasted only one inning in his starting assignment, and the Bears fell into a deep hole, as Texas Tech built an 8-0 lead through four innings. The loss dumps Baylor into an elimination game with Kansas State in another breakfast buffet at 9 a.m. Thursday.

“The biggest thing is, we’ve got to start fast. It’s just that simple,” Baylor coach Steve Rodriguez said. “We got started slow today and that usually becomes the tougher issue. You start slow and they start fast, and next thing you know you’re going with that uphill battle.”

Baylor entered this tournament knowing that it would have to dive deeper into its pitching staff, considering that Tyler Thomas (COVID protocols) and Blake Helton (minor arm injury) were both sidelined. Caley drew the starting assignment for the game against the Red Raiders (36-13), after not pitching in Baylor’s series win in Lubbock in late April.

But Tech wasn’t fooled by anything the freshman lefty delivered. Tech’s Dru Baker smoked a solo home run to lead off the bottom of the first, and the seemingly rattled Caley followed by walking four more batters in the inning as the Red Raiders shot out to a 3-0 lead after an inning.

Baker killed the Bears all game, as the leftfielder went 4-for-5 with three runs and three RBIs.

“They lead off the game with a home run, and from that point on it felt like it was uphill,” Rodriguez said. “You’ve got to give (Mason) Montgomery credit, he did a great job of being effectively wild in the zone with all of his pitches. Kind of had our guys on their heels. It was strike one, foul ball, then the next thing you know you’re in 0-2. At that point now you’re in defense mode a little bit.”

Indeed, Montgomery frequently had the Bears flailing away unsuccessfully at his offspeed pitches. The sophomore left-hander struck out 11 batters and didn’t walk any in a breezy five-inning stint. And that came against a Baylor team that has struck out less often than any team in the Big 12.

“His off-speed was so much better than what it was in Lubbock,” said Baylor shortstop Jack Pineda, who went 2-for-4 and reached base three times. “I think in Lubbock, he was really able to dominate us with the fastball. And today, you kind of saw him pitch a little bit. The off-speed stuff was good, but he was able to locate, too. He was going in and out, brushing us off the plate and then striking us out away. I know a lot of guys, he would set them up away and then come hard in at the end. He did a really good job.”

Texas Tech kept applying pressure, as it scored in each of the first four innings to gun out to a comfortable 8-0 advantage. The Red Raiders took advantage of 12 free passes issued by six Baylor pitchers. But they also banged out plenty of well-struck base knocks, including third-inning RBI doubles from Baker and Braxton Fulford, as well as a solo bomb from Nate Rombach in the fourth.

Baylor finally hit the pay station in the sixth. Pineda and Jared McKenzie both swatted singles off Tech reliever Andrew Devine. Later they pulled off an effective double steal that led to a throwing error from Tech’s catcher Fulford, allowing Pineda to score.

Tech got a run back in the bottom of the inning, and then Baylor finally busted out a bit in the seventh. The Bears loaded the bases on singles from Davion Downey and Jacob Schoenvogel and a walk by Chase Wehsener. After a popout from Pineda, BU’s McKenzie came through, ripping Eli Riechmann’s offering over the head of a diving Baker in left for a two-run double. Tre Richardson followed with an RBI groundout to cut the gap to 9-4 and give the Bears some sense of life.

“If we get one more hit with guys on second and third and two outs, if we get one more hit there and make it 9-6 it’s a different ball game,” Rodriguez said. “Now we’re able to get a couple guys on and some execution, next thing you know it becomes a tighter ball game. But we just couldn’t get the hit. It was just too late. We just waited a little bit long to get guys on base. No fault to our guys, they were definitely trying. It was just a lack of an ability to be able to do it.”

Baylor indeed missed out a prime chance to pull closer, as Andy Thomas whacked a hard liner that sailed right to Tech centerfielder Dillon Carter for the third out of the inning.

The upshot of the game for the Bears is that they didn’t burn any of their veteran arms. Of the five relievers who followed Caley on the mound — Chandler Freeman, Hambleton Oliver, Adam Muirhead, Zac Childers and Drew Leach — only Oliver had made more than five appearances before Wednesday’s game. That means experienced hurlers like Hayden Kettler, Jimmy Winston, Ryan Leckich and Luke Boyd are all fresh going forward.

“We want (the young pitchers) to have postseason experience,” Rodriguez said. “They’re not going to get it unless they get thrown out there. We kind of knew it could get out of hand, just not knowing how they might react. But I tell you what, I thought they did a really good job of coming in there. I was actually pretty proud of them the way they came in there and competed. It gave me some really good ideas of what we’re going to have in the future.”

Tech bounced back with a pair of runs in the bottom of the seventh to push the gap to 11-4. Baylor actually loaded the bases in the ninth when Tech’s Derek Bridges plunked three straight batters with pitches. But the Bears couldn’t take advantage, as pinch hitter Alex Gonzales struck out and Kyle Nevin flied out in that bases-loaded situation.

“It will be interesting to see how we face adversity, not only now but in the tournament and then in the future, too,” Pineda said. “We can take some positives out of this. We got some young guys some experience in a tournament atmosphere. And then, we put up a couple hits together and got some guys on base. Just that key hit is what we missed. Definitely can’t keep our heads down, but there are some positives to take out of that.”

While Baylor awaits Kansas State, Texas Tech draws TCU in a 4 p.m. winner’s bracket game Thursday. The Bears will need to win to stay alive and move on to a 3:15 p.m. game Friday.

OKLAHOMA CITY — It required a rally and a walk-off, but the Big 12 co-champions survived their opening game at the Big 12 tournament.

TCU’s Phillip Sikes singled home Hunter Wolfe in the bottom of the ninth, sending the second-seeded Frogs to a come-from-behind win over seventh-seeded Kansas State. TCU (37-16) moves on to face Texas Tech on Thursday, while the Wildcats (31-22) will meet Baylor in an elimination contest at 9 a.m.

Kansas State put itself in position to spring the upset, bouncing out to a 6-3 lead after four innings. The Wildcats scored four in the top of the first, highlighted by Dylan Phillips’ three-run home run.

But the Frogs kept chipping away, and ultimately tied the game with a three-run sixth. The right-field corner is often ripe for triples at Bricktown Ballpark, and no less than catcher Zach Humphreys flashed his wheels with a two-run three-bagger in that inning. Humphreys went 3-for-4 with three RBIs in the game.

Garrett Wright (2-1) picked up the final four outs on the mound for the Frogs to register the win.

WVU ace Jackson Wolf gave his team a complete-game gem. Wolf held the Longhorns (40-13) to just five hits while striking out seven. He overcame five walks and took advantage of a pair of double plays turned by his defense.

West Virginia produced only six hits itself, but four went for extra bases, including a solo home run from Hudson Byrorick and an RBI triple from Kevin Brophy. Brophy also scored twice on Longhorn wild pitches.

West Virginia (24-25) advances on to take on the winner of Wednesday night’s Bedlam game between Oklahoma and Oklahoma State. That game is slated for 7:30 p.m. Thursday. The Longhorns will play the loser of the Sooners and Cowboys in an elimination game at 12:30 p.m. Thursday.

Given the thoroughly overwhelming nature of their 45-20 win over visiting West Virginia on Saturday, it’s entirely possible that the Baylor Be…

Dave Aranda doesn’t have to look farther than Baylor’s football offices to get an in-depth scouting report on No. 19 BYU.

Texas Tech’s Nate Rombach (right) gets a hero’s welcome at home plate after banging a two-run home run in the fourth inning in the Red Raiders’ 11-4 win over Baylor Wednesday at the Big 12 tournament in Oklahoma City.

Baylor's Tre Richardson slides in safely ahead of the tag from Texas Tech's Cal Conley in the Bears' 11-4 loss to the Red Raiders on Wednesday in Oklahoma City.

Baylor's Tre Richardson dives for a foul ball in the Bears' 11-4 loss to Texas Tech. Richardson didn't come up with the catch.