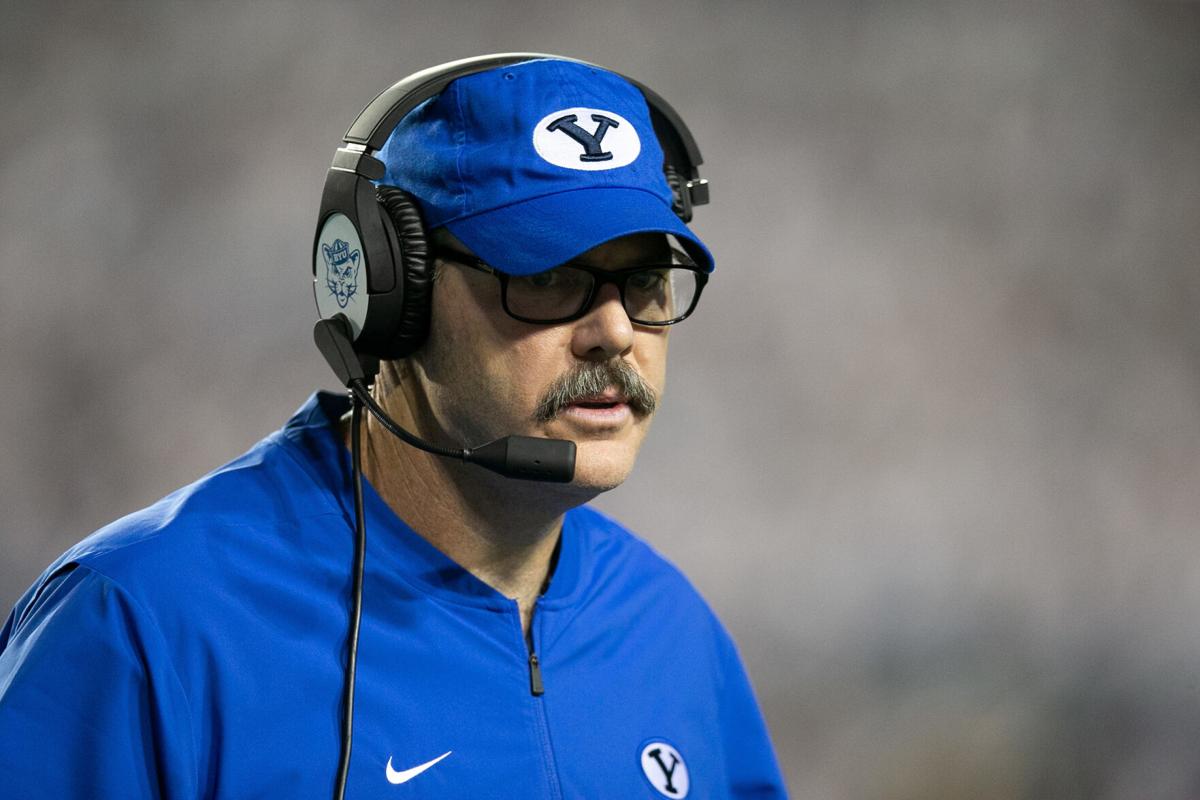 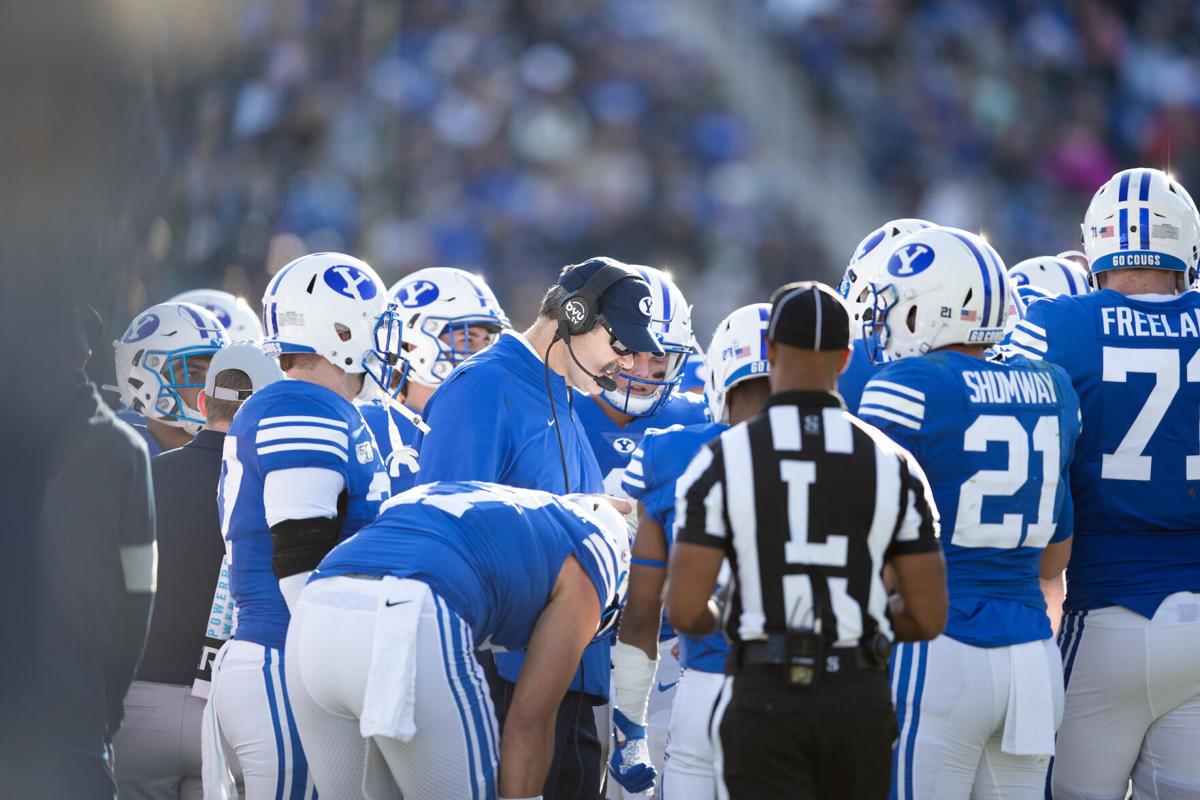 Jeff Grimes led the nation's third-ranked offense at BYU in 2020, and hopes to bring an attack that is "reliable and violent" to Baylor this year.

New Baylor offensive coordinator Jeff Grimes has been around long enough to love old-school, smash-mouth football but is creative enough to incorporate a wide-open, quick-tempo style.

His approach certainly worked at BYU in 2020 as the Cougars finished third nationally with 43.5 points per game and seventh nationally with a balanced attack that averaged 522.2 yards.

Grimes even has an acronym for his offensive style: RVO.

“RVO stands for Reliable Violent Offense,” Grimes said. “Those two words, reliable and violent, I think are the two things that are critical to an offense being able to succeed. Reliable meaning you’re consistently good, you can be trusted, you can do things the right way all the time.”

As much as anything, Grimes seeks consistent, smart, mistake-free football. BYU committed just nine turnovers in their 11-1 season in 2020 that was capped by a 49-23 win over UCF in the Boca Raton Bowl.

“I think the first thing an offense needs to be able to do is not lose the game,” Grimes said. “So you don’t have foolish penalties and turnovers and missed assignments and things that lose the game before you even have a chance to win it.”

BYU’s offense displayed remarkable balance as quarterback Zach Wilson passed for 3,692 yards and 33 touchdowns while Tyler Allgeier rushed for 1,130 yards, the eighth-best total by a FBS player for the season.

Grimes won’t create a playbook that’s as thick as “War and Peace.” He likes the streamlined approach with relatively few but highly efficient plays.

“The way you have an opportunity to win the game is to go out there and play with violence and play with an edge, whether that means running the football downfield, throwing the football down the field, and it means various things for various positions,” Grimes said. “We’re an attacking, multiple formation offense that runs a few plays a lot of ways with as much misdirection as anyone in the country.”

During Baylor coach Dave Aranda’s 2-7 debut season, the defense played well enough to have a successful season. But former offensive coordinator Larry Fedora’s offense ranked 100th nationally in scoring with 23.3 points per game and 118th in total offense with 310.2 yards per game.

The Bears particularly struggled running the ball as they ranked 123rd out of 127 teams nationally by averaging 90.3 yards rushing per game while averaging 2.7 yards per game. Though he played in only four games, Baylor’s leading rusher was Craig (Sqwirl) Williams with 197 yards.

“He’s got that personality where he just pulls you in,” Aranda said. “He’s very knowledgeable. I would bring him in (at LSU) and he would teach me O-line play. He’s a great recruiter. When he was there (at LSU), he was one of our top people in terms of identifying people, bringing them in for visits, and getting guys committed.”

A former offensive lineman for UTEP from 1987-90, Grimes has spent most of his career coaching the offensive line with stops at Hardin-Simmons, Boise State, Arizona State, Colorado, Auburn, Virginia Tech and LSU.

“I think any good offense should start with the offensive line,” Grimes said. “Obviously that’s something that’s been very close to me my entire career. I take the same approach now and have and will here, and that is the offensive line leads the group. They need to be the first one off the boats when you’re storming the beach. If our offensive line produces, in particular if they have a physical aggressive mindset, which Coach Mateos and I will demand, then the rest of our offense will follow along, because they can only do their jobs.”

“I’m looking forward to what I will see from the quarterback room.” Grimes said. “I think any time you’re going to take a position like this you look at the talent that is there, and I would just say that I wouldn’t be here if I didn’t think we had quarterbacks that we could win with. But in terms of where that goes from here, obviously we’re all starting at ground zero.”

After serving as Baylor’s offensive line and tight ends coach in recent years, Shawn Bell will coach the quarterbacks this season. Bell played quarterback for the Bears from 2003-06, passing for 5,666 yards and 38 touchdowns.

“With me being the coordinator and not the quarterback coach, I felt it was critical to have someone there that I trusted and would see the game the same way that I did,” Grimes said. “I felt that right away with Shawn. I felt a great connection with him and was really impressed with his overall knowledge of the game.”

Taking over as wide receivers coach is Chansi Stuckey, a former all-ACC selection who played for Clemson from 2003-06 and spent five seasons in the NFL as a receiver with the New York Jets, Cleveland Browns and Arizona Cardinals.

Before arriving at Baylor, Stuckey spent two seasons on Clemson’s staff, most recently in an offensive player development role during 2020 and as a graduate assistant in 2019.

“I know a couple of guys on the Clemson staff, so I talked to them about Chansi and they raved about him, could not have given a higher recommendation from people that I trust implicitly,” Grimes said. “They talked about him as a person, as a man of great faith and a family man, and as a guy who would be a great role model for our players as well as someone who has knowledge of the game who will do a great job developing our receivers.”

“I did not know Juice before this opportunity, but I love his energy and was really impressed as we looked at recruits this week with his knowledge of the game and what it takes to be successful, not only at running back but other positions as well,” Grimes said. “I think he’s a great evaluator and I really like the energy he brings.”

While each of Baylor’s offensive coaches will bring different strengths and ideas to the table, Grimes said the biggest key is to work cohesively as a staff.

“I think we’ve got a great staff, and what we’ll definitely do is we will work well together because that’s the key to a staff,” Grimes said. “There are a lot of smart guys out there, but when there are competing agendas and different philosophies that’s when it doesn’t go right. I’ll make sure that we work well together, and I know that those guys want to do the same thing.”

Due to COVID-19, Baylor shut down its campus during the 2020 spring semester, and the football team didn’t have spring drills. Grimes is looking forward to the upcoming spring drills, and believes those practices will be crucial to implementing the offensive staff’s ideas and principles.

“Anytime you’re installing a new offense, it’s more important for you than it is for people who might be doing the same thing they’ve been doing,” Grimes said. “It’s critical and I’m planning on making the most of it. If we have to adapt at some point, then we’ll be flexible. We’ll overcome.”

Aranda believes Grimes’ offense will have a strong identity and will be a force with its physical style of play.

“I think it’s the execution is the key,” Aranda said. “A really strong identity, and not the play of the week or the play of the day, but this is what we do and we’re going to get really good at it. People are going to have to able to defend us. I think just that ability of knowing who you are and stepping into the arena with a punch and a counterpunch just makes a lot of sense for us.”

In addition to the offensive coaches, Aranda also hired strength coach Vic Viloria from LSU and brought back James Blanchard to serve as Baylor football’s assistant athletic director for scouting.

Blanchard worked at Baylor in 2019 before spending the 2020 season as a scout for the NFL’s Carolina Panthers under former Baylor head coach Matt Rhule.

“James has a great heart and he loves recruiting,” Aranda said. “He just loves the talent evaluation. Back when I first got here, a year ago, I was just really impressed with James. During the quarantine time, James would set up calls, and really we were in on a lot of guys first and we were identifying guys that fit our criteria. I think James was even trailblazing some of the stuff and making us rethink our criteria.”

Running down a title: Lady Bears set for battle with Cowgirls

COVID-19 rust is a real thing.

Baylor Lady Bears pull away from OU in second half, 77-66

NORMAN, Okla. — The Baylor Lady Bears found the offense they needed in the first half, then clamped down on defense in the second half to fend…

The Big 12 has rescheduled three Baylor men's basketball games next week after they were previously postponed due to COVID-19.

Baylor baseball awaits reunion with Aggies at Round Rock Classic

Baylor signee Maryam Dauda was selected as a McDonald’s All-American announced by game organizers on Tuesday.

Back for her fifth season after COVID-19 shortened 2020, Goose McGlaun wants to return to the scary hitter she was upon arriving at Baylor.

Jeff Grimes led the nation's third-ranked offense at BYU in 2020, and hopes to bring an attack that is "reliable and violent" to Baylor this year.