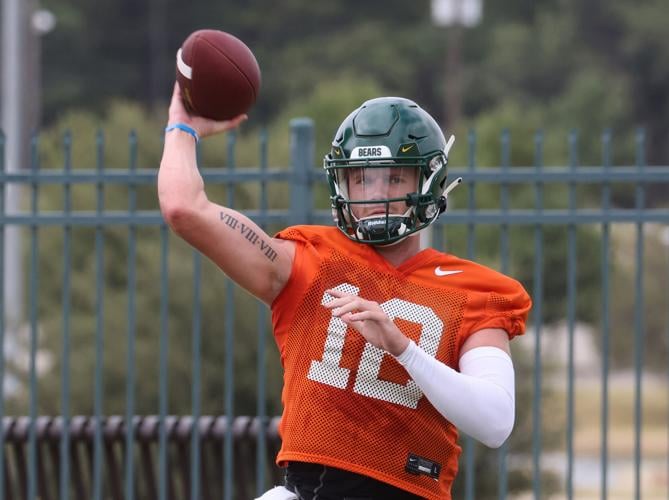 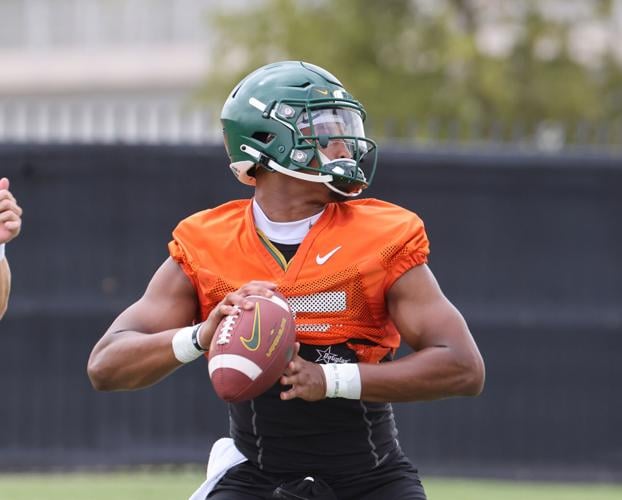 Redshirt freshman Kyron Drones will develop his skills this season in a backup role. 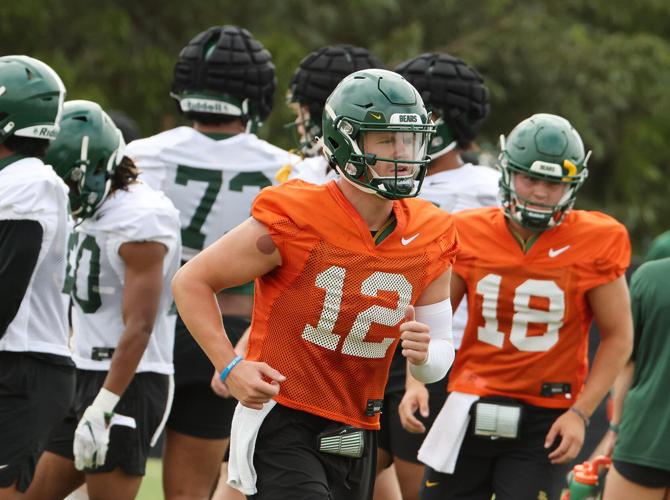 No longer is he the guy ready to step in for starter Gerry Bohanon. Now Shapen is QB1, the man all his teammates will look to for guidance and leadership this season.

“Yeah for sure, I’m not the backup quarterback any more, so I’ve got to take full control of everything that’s going on,” Shapen said. “I think I learned a lot of things being the backup. Stepping up into a leadership role is key for me right now.”

Aranda was praised for making the call when he did instead of keeping the competition going throughout preseason camp. Last summer, Aranda named Bohanon the starting quarterback three weeks into camp over Shapen and Jacob Zeno, who transferred to UAB.

“I have a lot of respect for him, and him doing that for me and Gerry,” Shapen said. “That means a lot to both of us. It just gave us both the opportunity to move on and do what we need to do in the future.”

Now a third-year sophomore, Shapen knows how tough the decision was for Aranda and how hard it was for Bohanon. Shapen saw Bohanon as a mentor, and learned a lot from how he approached games and practices during last year’s Big 12 championship season.

“I shot him a text afterwards and wished him luck in his future and things like that because Gerry taught me a lot and I learned a lot from him in the film room and on the field and how he handles things,” Shapen said. “I wish nothing but the best for him.”

Following some highly competitive spring practices, Aranda picked Shapen as the starter due in large part to his accuracy and proficiency as a passer.

In just his second college start last season, Shapen’s accuracy was on full display as he completed his first 17 passes and threw three touchdowns to earn MVP honors in Baylor’s 21-16 win over Oklahoma State in the Big 12 championship game.

Shapen had previously finished off Baylor’s 20-10 road win over Kansas State after Bohanon went down with a hamstring injury, and then helped the Bears complete the regular season with a 27-24 win over Texas Tech. Shapen hit 62 of 86 passes (72.1 percent) for 596 yards and five touchdowns with no interceptions last season.

“I didn’t have much experience under my belt,” Shapen said. “So being able to play in the Kansas State game, Texas Tech and the Big 12 (championship) helped me a lot, just being able to go out there and see how it works. That was my first time being on a college football field and playing an actual game.”

Aranda wants to see Shapen continue to grow as a leader and develop his passing skills to a higher degree.

“I want him to be himself and to not hold back, not trying to pretend to be anyone other than who he is,” Aranda said. “I think it’s one thing on this particular day, it’s going to be another after a big win or an unfortunate loss and all that. I think Blake on the inside has got it lined up. So you want him to lead from the inside out.”

With veterans like Tyquan Thornton, RJ Sneed and Drew Estrada gone, Shapen will work with a large group of wide receivers trying to earn their places on the field.

Sixth-year senior Gavin Holmes is the longest standing veteran in the room while younger players like Josh Cameron, Javon Gipson, Jaylen Ellis and Monaray Baldwin should make an impact.

“We lost most of our receiving corps last year, so of course they’re going to be younger and a little bit more inexperienced and things like that,” Shapen said. “But they’re learning every day. That’s what fall camp is for, that’s what all these practices are for, these walk-throughs. We’re up here until 9:30 or 10:30 at night. That’s what this is for, to learn and grow, and learn from our mistakes, and keep moving forward.”

The Baylor receivers like Shapen’s accuracy and the poise he’s shown at quarterback.

“Yeah, he’s a slinger,” Holmes said. “And I think, too, that says a lot to the work that we put in over the summer. Blake’s a stud, he’s got an arm, accurate quarterback, but we put in the work together to get that timing right. And if he puts it out there, we’re going to go get it.”

For the first time, Baylor has been picked as the Big 12 favorite. But Shapen doesn’t expect to be overwhelmed by the pressure of high expectations.

“I think it only improves my game,” Shapen said. “I know there are a lot of expectations to live up to, but at the end of the day that’s not what I’m worried about. I’m worried about getting W’s every day. I know there are going to be losses and there’s going to be days when I don’t have the best day, and I just have to keep growing. It drives me to be a better football player.”

While most of the focus has been on Shapen, Baylor is trying to build depth at quarterback. Redshirt freshman Kyron Drones said Shapen has helped him with his maturation process.

“I would say just I guess being more confident and talking with me through the game,” Drones said. “I know when I first got here, I was kind of hesitant on college football coming from high school. And not playing for a whole year, that was my main issue in the spring. And then, talking with Blake and learning defense, being confident and how he’s a gunslinger, just building that kind of mentality.”

By far the most experienced quarterback on Baylor’s roster is Luke Anthony, a seventh-year grad transfer who has already earned his bachelor’s and master’s degrees.

After starting his career at Abilene Christian, Anthony transferred to Louisiana Tech. He played for Abilene Christian against Baylor in 2018, completing 26 of 39 passes for 231 yards and two touchdowns in a 55-27 loss to the Bears at McLane Stadium.

“The funny thing is I’m so old, most of the guys (from 2018) are already gone,” Anthony said. “Second drive of the game, I threw a pick, and I was like, ‘That was a pretty athletic play.’ Sure enough, I came back on my visit and we watched the game, and it was (former Baylor linebacker) Terrel Bernard. So I was like, ‘Oh, OK, now this guy’s in the league and I’m a seventh-year guy just kind of filling in in the backup role.”

The Baylor track and field program announced a pair of staff changes on Wednesday.

Baylor defense could be even better than last season

In an era when ridiculously talented quarterbacks and high scoring offenses get 90 percent of the publicity, Baylor proved last season there’s…

Defending Big 12 champion Baylor continued to get a great deal of respect as the Bears were picked No. 10 in the USA Today preseason coaches poll.

Bears aware of target on their backs in tough Big 12

Coming into last season, nobody circled Baylor as a must-win game. Except perhaps TCU, which always has it out for the Bears.

Baylor offensive preview: QB settled, but most skill positions up for grabs

Baylor football players announced the launch of the Waco NIL Club on Wednesday.

Redshirt freshman Kyron Drones will develop his skills this season in a backup role.