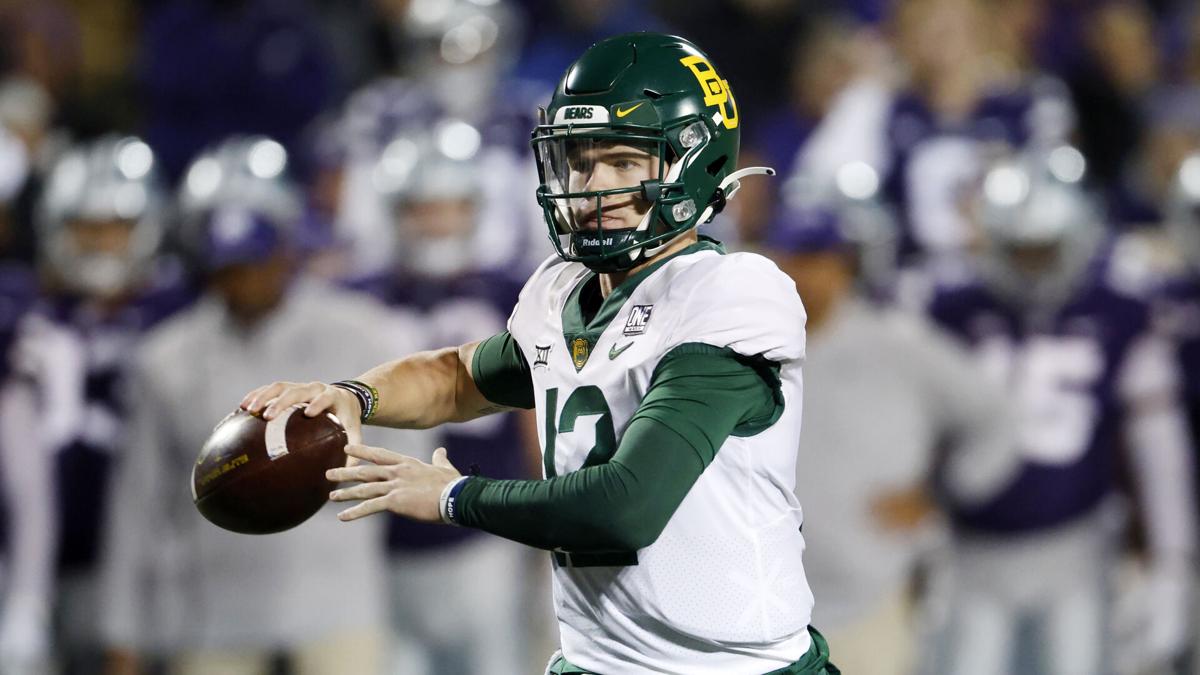 Pressed into action against Kansas State, Baylor quarterback Blake Shapen hit 16 of 21 passes and led the Bears on a pair of scoring drives to extend the lead. 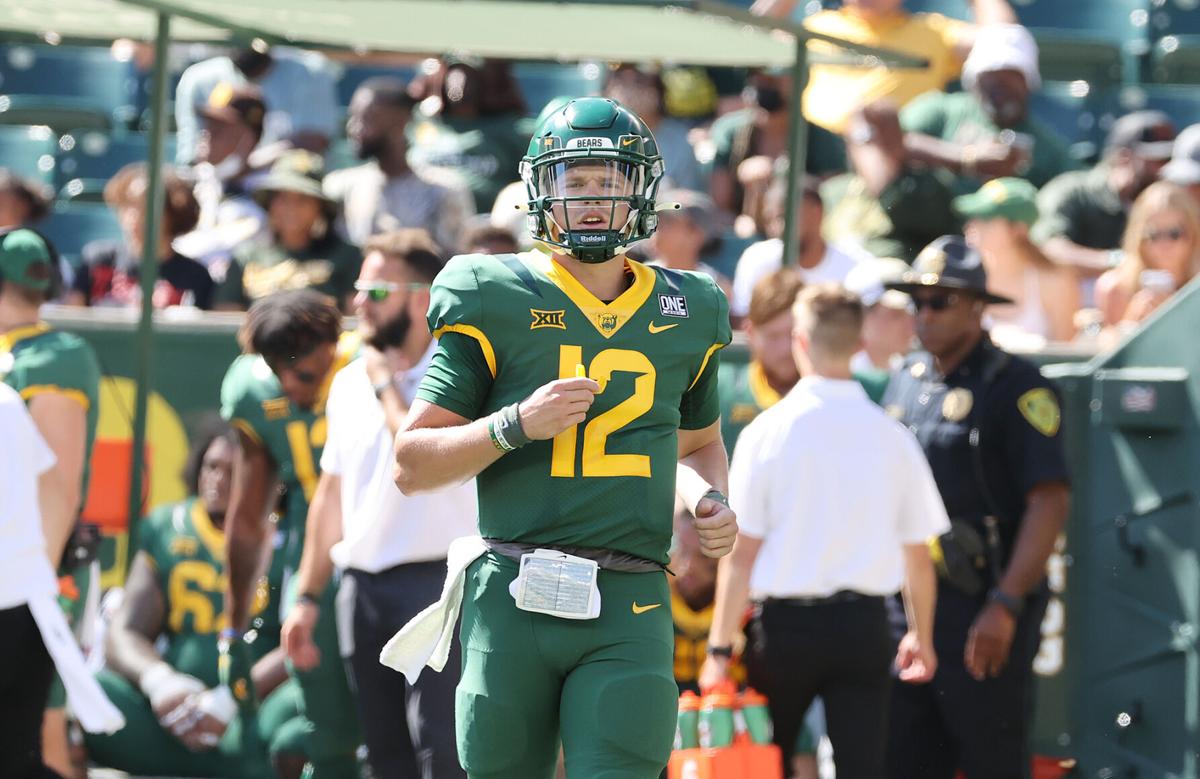 Blake Shapen was a four-star quarterback recruit at Evangel Christian Academy in Louisiana before signing with Baylor, as well as that state's No. 1 shortstop prospect in baseball. 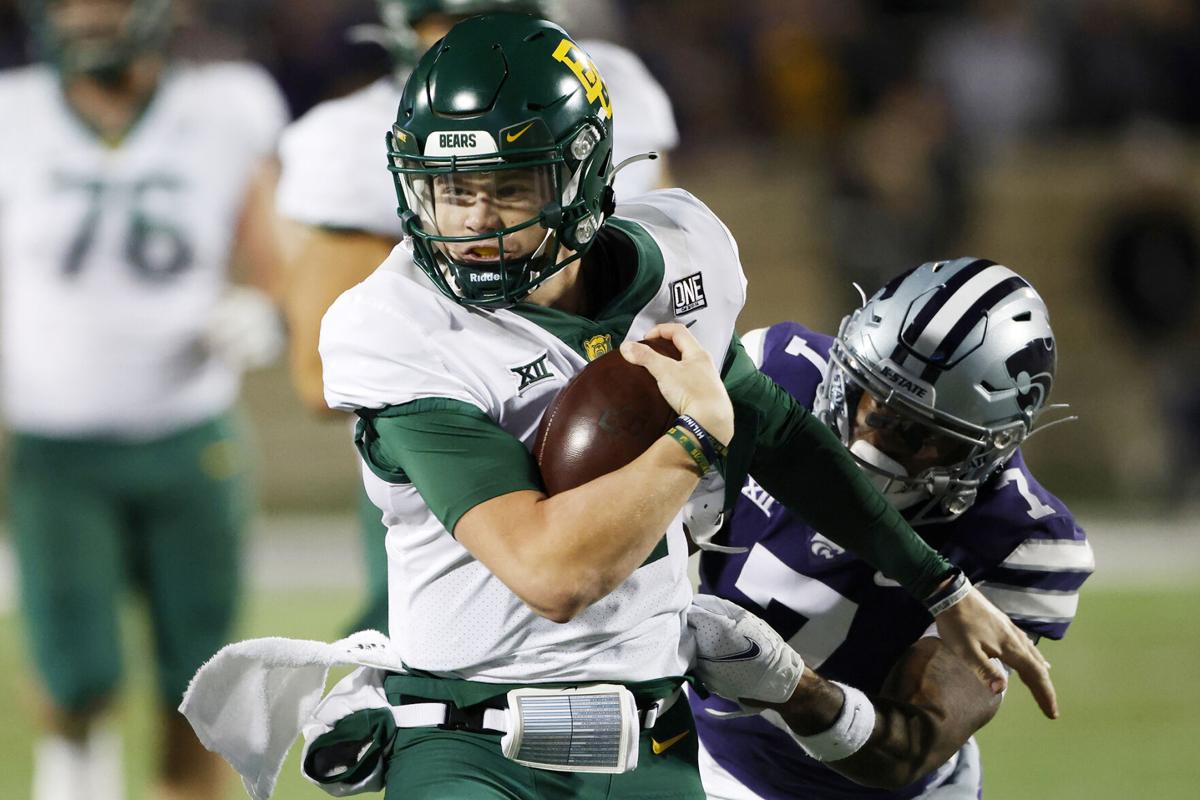 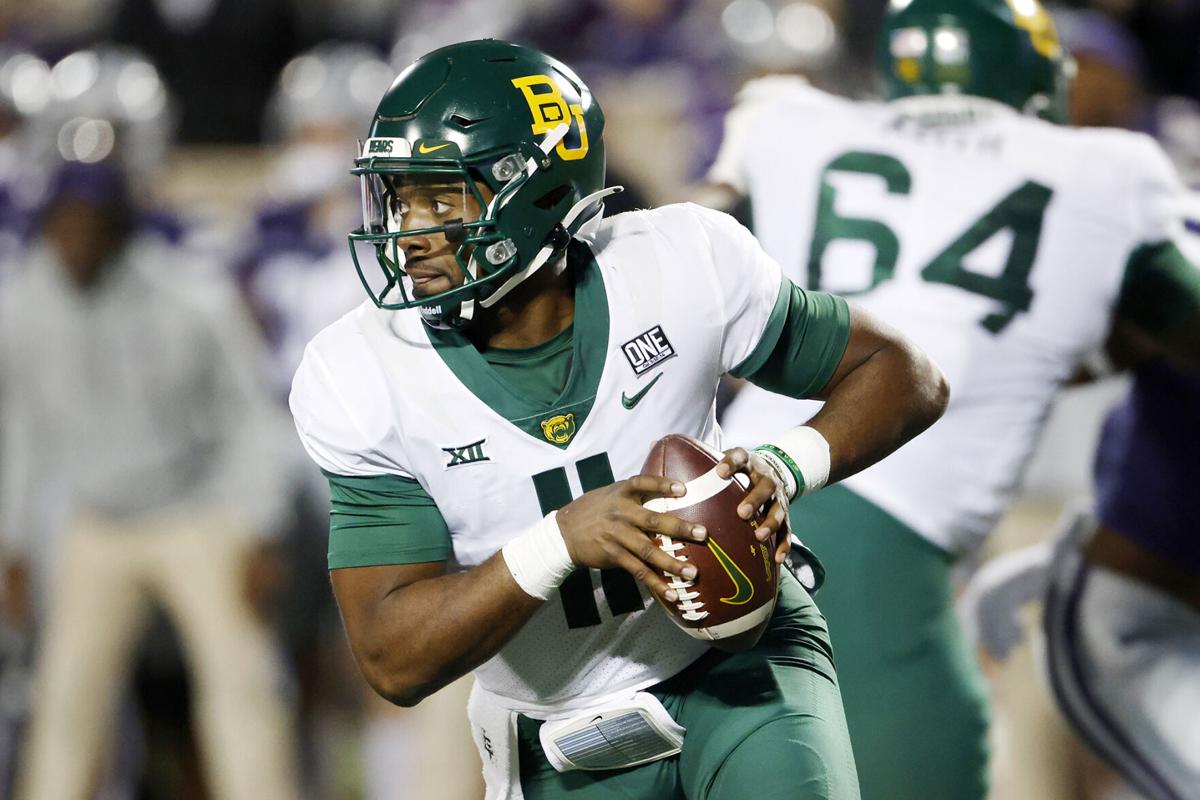 Baylor has not ruled out a return by Gerry Bohanon from the hamstring injury he suffered at Kansas State, calling his status "day to day."

With a helmet on his head, Blake Shapen looks a heck of a lot like Charlie Brewer. He even wears Brewer’s old jersey number of 12.

“The Blake Shapen-Charlie Brewer symmetry is actually frightening,” tweeted @realcamstuart, one of dozens of tweets about the similarity.

And, much like Baylor’s old starting quarterback, Shapen stepped into the fray and acquitted himself nicely in the No. 9 Bears’ rugged 20-10 win at Kansas State last weekend.

Thing is, as Baylor (9-2, 6-2) sets up for its regular-season finale against Texas Tech on Saturday at McLane Stadium, the Bears don’t need Shapen to be Charlie Brewer, even as Chuckie Comeback’s younger doppelganger. Nor do they need Shapen to be Gerry Bohanon, the starting QB in Baylor’s first 11 games of the season who bowed out with a hamstring injury against K-State.

They just want Shapen to be himself. Baylor coach Dave Aranda says that the redshirt freshman out of Louisiana’s Evangel Christian Academy boasts a strong arm and uncommon poise for a player so young. But if Shapen indeed draws the start against the Red Raiders (6-5, 3-5), the game won’t be all on his shoulders, the coach added. So much of Baylor’s 2021 offensive success is predicated on the running game.

That’s true whether Bohanon, Shapen or Joe Schmoe is in at quarterback. (Turns out there’s no Schmoe on the BU roster, after all.)

“Offensively, I think so much of it depends on the run game, how the run game goes,” Aranda said. “If the run game is going, it’s going to open up the play-action pass, and open up opportunities to throw, particularly the deep ball, which both Gerry and Blake have a good knack for. If the run game is not going, and there are not passes that are easy completions out there, it’s a matter for Gerry getting him out of the pocket, for Blake getting max protection and getting guys out late and working on mismatches or one-on-one matchups.”

During his Monday media session, Aranda refused to rule out a return by Bohanon, who pulled up lame in the second quarter of the K-State game following a scramble. Certainly, some people bounce back from hamstring injuries faster than others. But it seems unlikely that Bohanon would be fully ready to play in just a week.

“Gerry right now is still day to day,” Aranda said on Monday. “He’s getting treatment as we speak, and was up here most of yesterday doing that. So I just know in talking to him, there’s probably not going to be someone more determined to get back than him. Saturday his heart was broke. So he’s working really hard to come back. If I were to bet, I’d bet on Gerry.”

Was that a bit of gamesmanship by Aranda, trying to add a bit more mystery to the proceedings while keeping the Red Raiders in the dark? Perhaps. And perhaps Bohanon is an especially quick healer. But at the very least, Shapen should receive plenty of practice reps this week in case he’s needed, either as the starter or in another emergency capacity.

Against K-State, you could have given Shapen — who doubles as a stud baseball player, as the No. 1 shortstop prospect in the state of Louisiana coming out of high school — a save in the stat book. Aranda expressed pride with how Shapen “didn’t flinch” in the face of a pressure-packed moment.

Offensively, the Bears remained pretty conservative with Shapen taking the snaps. But that also followed the flow of the game. Shapen completed 16 of 21 passes for 137 yards with no touchdowns and, more importantly, no interceptions. He was sacked once, but finished with a net total of 44 rushing yards. His longest pass covered 32 yards, on a 4th-and-6 toss to Drew Estrada on just his third fling of the day.

Mostly, Baylor relied on short passes to complement the running attack led by Abram Smith and Trestan Ebner. With a week to prepare, might the Bears tweak the offense to favor anything that the strong-armed Shapen does particularly well? If so, the Bears aren’t telling. Aranda naturally didn’t reveal the Bears’ offensive game plan, though he did note that there’s “a little bit of a difference” between Shapen and Bohanon.

Still, it all circles back to one fundamental objective. If the offensive line can seize victory in the trench battle, and if Ebner and Smith can continue to keep the chains moving on the ground, that’ll give Shapen plenty of opportunities to put the ball in the air and show what he can do.

“It starts with getting the run game going, and by us doing what we can do,” Aranda said. “When things open up on their end, then we take advantage of it.”

Shapen’s teammates gushed with praise over the quarterback’s effort following the K-State win. But they stopped short of expressing surprise.

“We’ve seen what he could do in practice,” Estrada said. “He’s got a great ball and is really poised and calm back there. When he knew he was going into the game, he just had a sense of calmness about him. Couple that with the performance he has in practice and how confident he is, there’s no doubt he can come in and take control of the game.”

Baylor linebacker Dillon Doyle said that when Bohanon went down, everyone was disappointed, but didn’t freak out, because they knew Shapen would be up to the task.

“Blake’s ready to go. We see the work he puts in,” Doyle said. “It’s week 12, you guys haven’t seen the 12 weeks plus camp that Blake puts in. He deserves every bit of the recognition he gets from (the Kansas State) win.

“He’s an awesome kid. I love him. Just really looking forward to seeing how he grows from this win and how he learns from his first real time in the spotlight.”

If you were designing a quarterback part by part, you’d undoubtedly want someone with a Pat Mahomes cannon arm, maybe the speed of Lamar Jackson, the pre-snap recognition of a Peyton Manning.

Beyond all that, though, you’d want your quarterback to exude confidence. Aranda said that Shapen has that in spades. He’s kind of unflappable in that regard, whether he’s facing a heavy pass rush or just shooting the breeze with his teammates at their gameday breakfast. ‘

“So, for Blake to come in and attack that moment that is what we would expect. That’s the Blake that we know and there’s a gunslinger in him, I think you guys all saw that. There’s a lot more there. His future’s very bright.”

Pressed into action against Kansas State, Baylor quarterback Blake Shapen hit 16 of 21 passes and led the Bears on a pair of scoring drives to extend the lead.

Blake Shapen was a four-star quarterback recruit at Evangel Christian Academy in Louisiana before signing with Baylor, as well as that state's No. 1 shortstop prospect in baseball.

Baylor has not ruled out a return by Gerry Bohanon from the hamstring injury he suffered at Kansas State, calling his status "day to day."