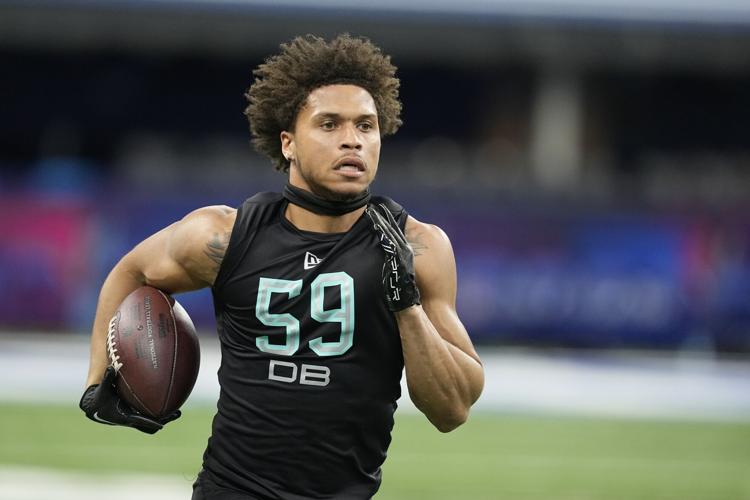 The Houston Texans liked what they saw from Baylor’s Jalen Pitre, both at the NFL Scouting Combine in Indianapolis in March and from his game tape with the Bears. 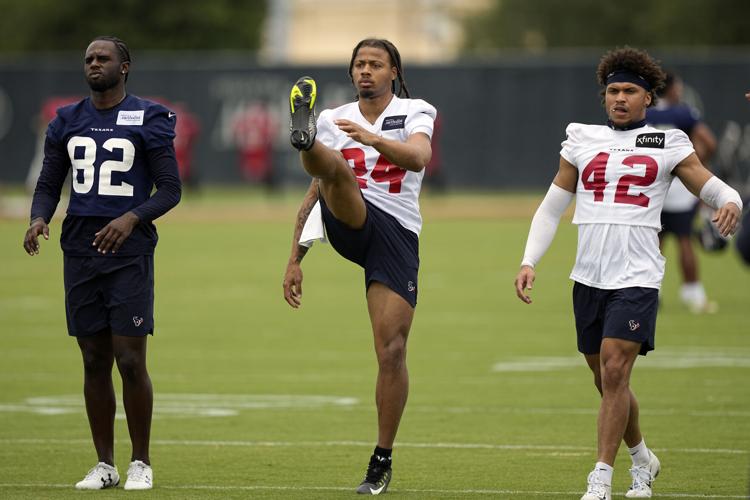 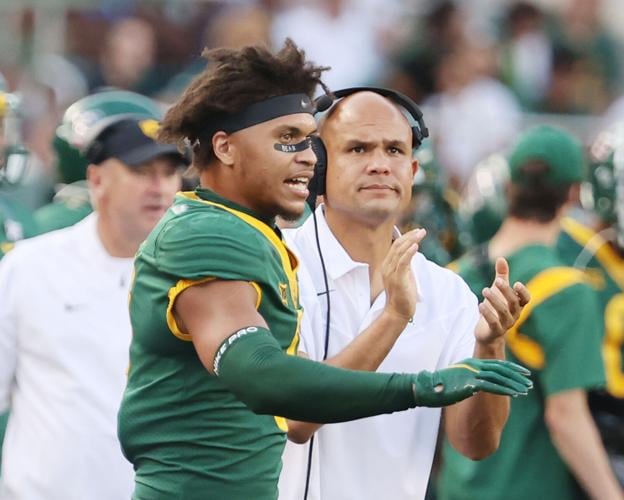 Jalen Pitre (left), a fan favorite among Baylor fans for staying loyal to his commitment to Baylor after the Art Briles scandal fallout, said he's happy he stuck around and saw his time with the Bears to completion. 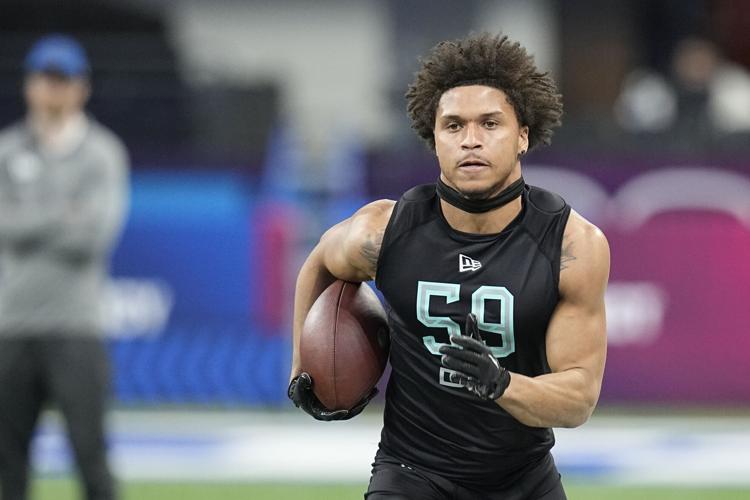 Baylor's Jalen Pitre said that while he would have enjoyed being a first-round pick, he's happy to be going back home to Houston as one of the newest members of his hometown favorite team, the Texans. Pitre starred at Stafford High School before Baylor.

JOHN McCLAIN Special to the Tribune-Herald

HOUSTON — The vital role safety Jalen Pitre played in the reconstruction of Baylor’s football program makes him an ideal fit with his new team, the Houston Texans.

From a 1-11 start as a freshman to a 12-2 finish as a senior, Pitre’s contributions to the Bears’ renaissance and his unwavering loyalty to his early commitment in 2015 have endeared him to Baylor fans like few athletes in the school’s history.

The Texans, who are coming off 4-12 and 4-13 seasons after winning four AFC South titles in five years, expect Pitre to be part of their revitalization, as well. That’s why general manager Nick Caserio drafted Pitre in the second round — 37th overall — to play for head coach Lovie Smith, who’ll oversee the defense.

The Texans like how Pitre thrived in Dave Aranda’s first two seasons: consensus All-American, Big 12 Defensive Player of the Year and, most importantly, Sugar Bowl champion. After watching Pitre play safety/linebacker, a hybrid position, the Texans are excited about his versatility and how he’ll transition into Smith’s 4-3 defense.

“What Coach Aranda has done at Baylor, I would say it’s because of people like Jalen Pitre,” Caserio said. “He meant as much as anybody to that program. They used him in the slot. He played safety, so he has some position versatility.”

The Texans won’t pigeonhole Pitre into a particular position. At 5-11, 198, he looks like a cornerback but plays like a safety. They know he can play the run exceptionally well and cover slot receivers. More than likely, they’ll use him around the line of scrimmage rather than play him in two-deep coverage.

“You want players that can do multiple things,” Smith said. “He can play free or strong safety. He can nickel, also. We feel like his skillset says that.

“We’re looking for a safety — smart guy. He’ll test as high as anybody around. We think he’ll be able to pick things up (fast). From there, making plays (because) that’s what he did throughout his career at Baylor.”

During this weekend’s rookie minicamp Pitre reflected on his experience at Baylor and how it can help him move to a team entering phase two of a massive rebuilding project.

“It was rough early on,” he said about surviving the fallout of the Art Briles scandal and winning one game as a freshman under first-year coach Matt Rhule. “As a kid growing up, you don’t understand that things can be that hard and you may go through stuff like that.

“Looking back on it, I’m going to use that experience to continue to evolve as a person and as a player. When you have to work so hard for something, you’re more appreciative of the results. I’m grateful for the hardship I went through because it made me into the person I am today.”

The person Pitre is today has come a long way since he played for Stafford High School and committed to Baylor in July of 2015, signed in December of 2016 and refused to bail on that commitment like every other member of his recruiting class.

“I initially stayed because of the academics,” said Pitre, who earned a master’s degree in educational psychology. “I knew Baylor was a great school to get a degree, and they played big-time college football. Over the years, I grew as a person with (help from) Jesus Christ. My relationship with him has grown substantially.

“I never had one regret, never thought twice about the decision I made. I was thankful to be in that position. I learned so many things from the coaches I had, and they helped me translate my playing style into great production on the field. I’m grateful I stayed at Baylor, and it was the best decision I’ve made in my life because it changed my life.”

Now Pitre’s life is changing again. Last week, he signed a four-year, $8.95 million contract to play for his hometown team and his favorite team growing up in Stafford, a suburb a few miles from NRG Stadium. He learned valuable lessons in Waco that’ll help him in Houston.

“Staying true to yourself, believing in yourself and understanding it takes a team to get things done,” he said. “You have to figure out a way to help your teammates get better. I’m all about the team and making sure we take steps together and not try to do things single-handedly.”

Because the Texans showed so much interest in Pitre before the draft, he knew there was a chance they would select him, but nothing was guaranteed.

“It was an emotional experience to be able to stay home and play for a team I’ve followed my whole life,” he said. “I was kind of sad I didn’t get picked early (first round), but God has a plan for me. I’m staying home, and I have a great coach. I’m planning to learn a lot from coach Smith. I’m very thankful he believes in me.”

Because of his size, speed, athleticism, production and NFL potential, Pitre is being compared to two veteran safeties — Tyrann Mathieu (Saints) and Budda Baker (Cardinals).

“They’re my role models,” he said. “Tyrann is definitely No. 1. I try to take a lot of things from his game — his versatility and his knack for always being around the ball and his instincts. I try to mix in some Budda Baker as well. I want to play like my hair’s on fire and hit people as hard as I can when I get there.”

As he takes the next step in an extraordinary career, Pitre has learned a lot of lessons, one in particular that’ll he believes will serve him well.

“I feel like if you look too far ahead,” he said, “you’ll start to trip over the things in front of you.”

John McClain, a Waco native and former Tribune-Herald sportswriter, recently retired after 47 years covering the NFL for the Houston Chronicle. McClain has a plaque in the Pro Football Hall of Fame and will be inducted into the Texas Sports Hall of Fame next weekend.

No need checking for a pulse — the Baylor Bears are alive and well.

It’s college softball’s version of the NIT on a smaller scale.

Local golf notebook: Baylor golfers ready to party like it's 2015 (plus one more win)

As the opening round draws near, Jay Goble is getting lots of 2015 vibes.

Baylor men's basketball will represent the United States at the inaugural GLOBL JAM, a partnership between Canada Basketball and the National …

The Houston Texans liked what they saw from Baylor’s Jalen Pitre, both at the NFL Scouting Combine in Indianapolis in March and from his game tape with the Bears.

Jalen Pitre (left), a fan favorite among Baylor fans for staying loyal to his commitment to Baylor after the Art Briles scandal fallout, said he's happy he stuck around and saw his time with the Bears to completion.

Baylor's Jalen Pitre said that while he would have enjoyed being a first-round pick, he's happy to be going back home to Houston as one of the newest members of his hometown favorite team, the Texans. Pitre starred at Stafford High School before Baylor.