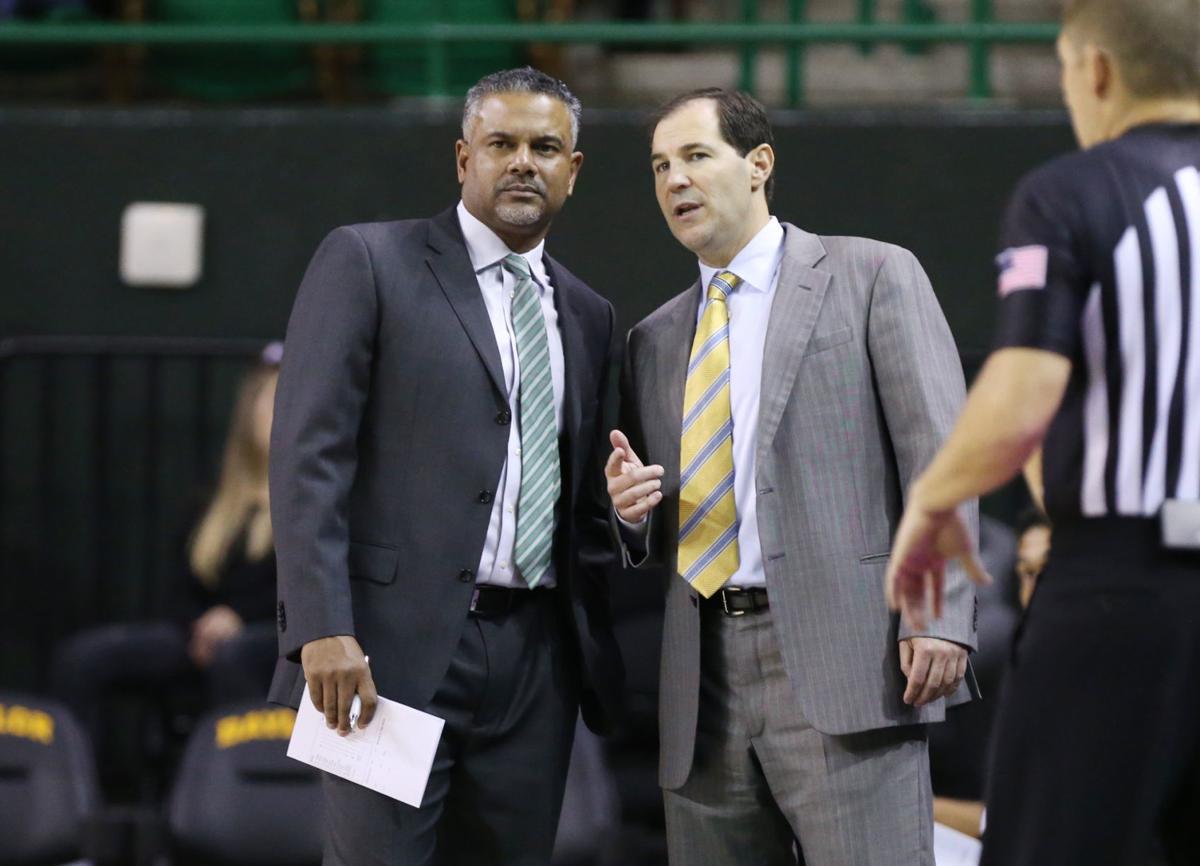 Associate head coach Jerome Tang, left, has been with head coach Scott Drew, right, since Drew’s first year at Baylor. Despite opportunities to become a head coach, Tang believes his place is with the Bears. 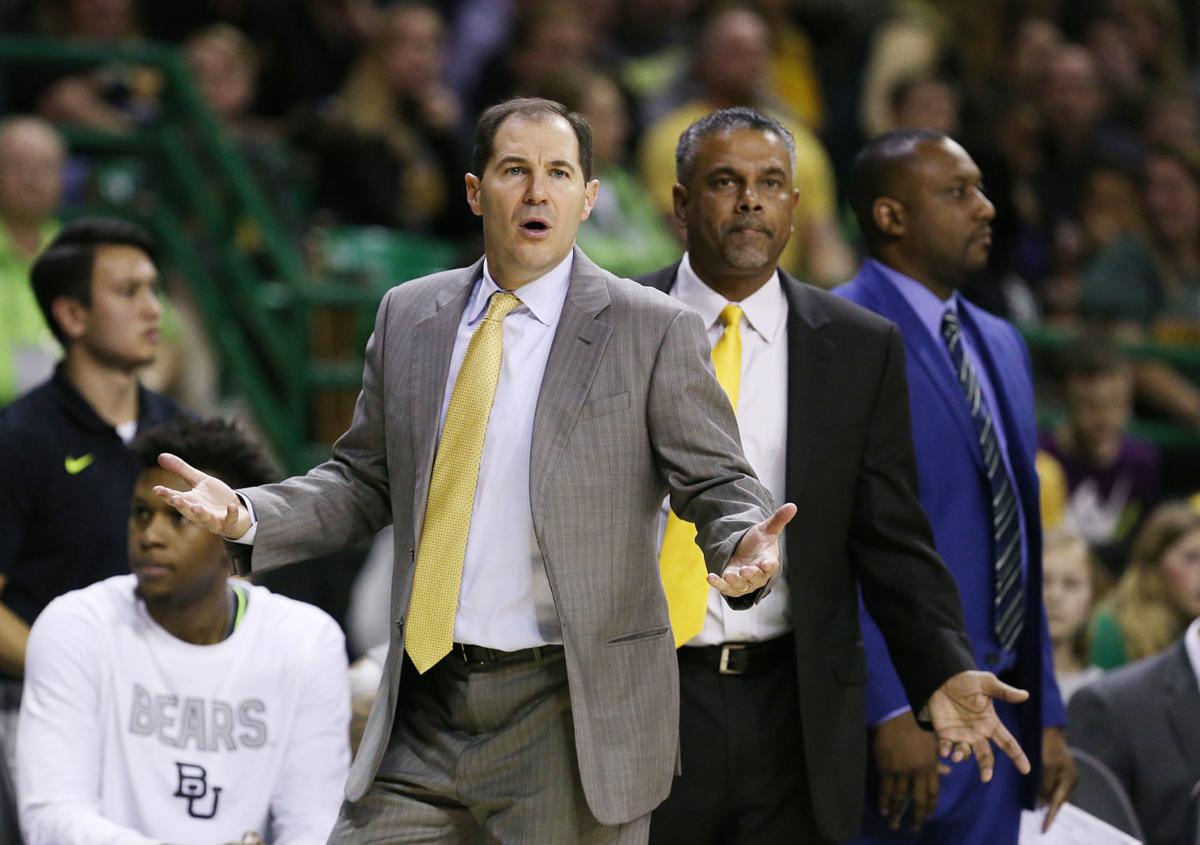 Associate head coach Jerome Tang, right, had plans to be an NBA coach, but he believes he’s where he and his family should be.

After 10 years as an assistant, he would become a college head coach for the next seven. Those would be highly successful years with four Final Four appearances and three NCAA championships.

Next stop would be as head coach of the Los Angeles Lakers where he would be fired after two years, but the club would have to pay him for the final five years of his contract.

“Then my wife and I would travel around the world and build orphanages and schools,” Tang said. “That’s a 37-year-old man’s plan.”

Tang’s career hasn’t come close to turning out that way.

He’s still at Baylor working under head coach Scott Drew, and he couldn’t be happier.

Tang has played a vital role in turning around a program that was barely on life support when he and Drew arrived in 2003. Beginning with a breakthrough NCAA tournament appearance in 2008, the Bears have gone on to make eight NCAA tournaments with Elite Eight appearances in 2010 and 2012 and Sweet 16 berths in 2014 and 2017. Additionally, Baylor has made three NIT appearances, highlighted by the 2013 championship.

Several of Drew’s assistants have gone on to head coaching jobs, including Matt Driscoll at North Florida, Grant McCasland at Arkansas State and North Texas, and Paul Mills at Oral Roberts.

Tang has had head coaching opportunities of his own, but has always felt that staying at Baylor was the right place for himself and his family. Tang and his wife, Rey, have a son named Seven and a daughter named Aylyn.

“I make all my decisions by putting God first, my family second and my career last,” Tang said. “At Baylor, I can freely speak about myself and who I am in any situation, in any student-athlete interaction or any speaking engagement. It’s been an unbelievable opportunity to stay here.”

Drew has always encouraged his assistant coaches to pursue their own head coaching dreams. So he feels fortunate that Tang, who has carried the title of associate head coach since 2017, has elected to stay with him all these years and continue to build the basketball program into an NCAA power.

Drew has always given Tang a lot of responsibility whether it’s analyzing and recruiting players, developing game plans, or coaching in practice. During the past season, Drew put Tang and assistant coach Alvin Brooks III in charge of coaching Baylor’s man-to-man defense after the Bears had used a zone defense as their base for many years.

The results were transformative as the Bears emerged as one of the best defensive teams in the country. The Bears put together a Big 12-record 23-game winning streak and were ranked No. 1 for a school-record five straight weeks in the Associated Press poll.

Following a 26-4 overall record and a second-place Big 12 finish behind Kansas, the Bears believed they had the tools to reach the Final Four for the first time since 1950 before the coronavirus pandemic shut down postseason play.

“We could have played any defense and Davion, Freddie and Mark would have made it do well,” Tang said. “Coach Drew trusted us. How many coaches with his success would say we want to go from a zone to a man, and trust his assistants to implement the plan? He was the architect and he gave us the responsibility.”

Tang has always admired how willingly Drew has been to listen to his assistant coaches’ suggestions. Though he’s the most successful coach in Baylor men’s basketball history with 342 wins in 17 seasons, Drew has never acted like he has all the answers.

“The environment Coach Drew creates allows us to be honest with him,” Tang said. “He invites opinions and conversations, and he listens and then he figures out what the best decision is. That’s a unique thing for him to be humble enough in a leadership role to listen.”

Drew knows a coach with Tang’s experience will always provide valuable input regardless of the circumstances.

“Many hands make light work is one of my favorite sayings,” Drew said. “The great thing is when you have outstanding assistants, it makes your program better when you can diversify and delegate responsibility. My dad (former Valparaiso coach Homer Drew) always gave his assistants a lot of responsibilities. That’s how you prepare assistants to be head coaches.”

Tang had never met Drew before their paths crossed in 2003.

Tang was born in the West Indies in Trinidad and lived in the U.S Virgin Islands in St. Croix. He also lived in New Jersey before moving to the Houston area when he was 10. He played basketball at Houston North Shore High School before he was cut from the team his senior year.

But that didn’t stop him from playing basketball at North Central University in Minneapolis and Normandale Community College in Bloomington, Minn. He could see the influence that his basketball coaches had on players’ lives and wanted to pursue that route.

He also had a passion for ministry and found the right fit when he became the basketball coach at Heritage Christian Academy in Cleveland, Texas, in 1993. He also became a youth pastor at First Assembly of God, which was connected with the school.

Tang turned Heritage Christian into a private school power as he won four TAPPS state championships. In 2001, his squad gained national attention when Cedrick Hensley scored 101 points in a game.

Heritage produced numerous NCAA Division I players as Hensley and Elijah Miller signed with Houston, Marlon Pompey with Texas A&M, and Lamar Hurd with Oregon State. His most publicized recruit was McDonald’s All-American Von Wafer who signed with Florida State and became the 39th overall pick by the Lakers in the 2005 NBA draft.

“The basketball program had five coaches in four years before I got there,” Tang said. “The juniors who were there prayed that God would send them a coach that would stay there at least two years. In the second year, we won the state championship. I think guys wanted to know that someone cared about every aspect of their life and would invest time and energy into it.”

After nine years as a Valparaiso assistant and one season as a head coach, the 32-year-old Drew took over a Baylor basketball program that was in turmoil in 2003. Carlton Dotson was arrested for the murder of teammate Patrick Dennehy, and coach Dave Bliss was fired after trying to cover up NCAA violations.

Drew had heard of the powerful program Tang had built at Heritage Christian, and was impressed by his deep Christian faith when he met him for the first time. Drew then went down to Cleveland to see him and offered him the job.

“He said ‘Can I have dinner at your house?’” Tang said. “His dad had told him that you can learn a lot about a guy by having dinner with him. So my wife and I gathered $10.81 and got some ribs and some potato salad. I gave Scott a fork and he used his hands. I said, ‘All right I like this guy.’ When he left, he said the job is yours.”

Tang didn’t think he had a chance for the job because he didn’t have a four-year college degree at the time. He later earned his degree online from Charter Oak State in 2007. But Drew could tell Tang’s personality could make him an effective recruiter, and their ideas about developing a basketball program and the importance of faith in their lives meshed.

“I just thought he was a great fit for Baylor University and how we wanted our program to progress,” Drew said. “Coach Tang has never met a stranger. He’s very outgoing and personal, and he never puts up limitations. Right away, he believed Baylor basketball could be a national power. You want people to aspire to those levels of greatness.”

Taking over a scandal ridden program that other coaches wouldn’t have touched at the time, Drew and assistant coaches like Tang, Driscoll and Mark Morefield gradually signed the recruits they needed to make the Bears competitive.

Players like Senegalese center Mamadou Diene and Australian guard Aaron Bruce were two of the first building blocks. When the Bears signed guards Curtis Jerrells and Henry Dugat and forward Kevin Rogers in the 2005 class, McDonald’s All-American guard Tweety Carter in 2006, and high-scoring guard LaceDarius Dunn in 2007, the groundwork was set for Baylor to make a run at its first NCAA tournament berth in 20 years.

After going 21-10, Baylor held a watch party at the Ferrell Center for the 2008 NCAA tournament selection show. CBS waited until the last minute to announce Baylor had made the tournament, prompting players, coaches and fans to explode in a joyous celebration.

“I remember being a high school coach and watching it on TV, and there were always two or three teams they showed on the screen that didn’t get picked,” Tang said. “As they were bounding from region to region, I began to wonder if we’re that team that doesn’t get picked. When they said our name, it was such joy like I never experienced. I jumped up and Seven fell off my lap. Coach Driscoll and I hugged and cried.”

That breakthrough opened the door for the Bears to recruit a lot of talented players as Ekpe Udoh, Quincy Acy, Perry Jones, Quincy Miller, Isaiah Austin, Pierre Jackson and Cory Jefferson came through the program in the following years.

It’s always been important for Drew and Tang to recruit high character players to go along with their basketball skills.

“Certain players allowed us to get other players,” Tang said. “I think it’s our players who have done the best job of recruiting guys. They could tell us what guys fit with hard workers and high character, and guys who care about others. Coach (Drew) builds such a great culture. He wants our players to be leaders.”

Tang hasn’t become the Lakers’ coach. He hasn’t been a college head coach. But he’s played a major role in building a highly successful basketball program while raising his family, and freely expressing his faith in an environment that has allowed him to do it.

Through it all, he’s developed a great friendship and working relationship with Drew.

“Scott is my friend, he’s my boss,” Tang said. “We’ve grown from friends to family. You always want to see family do well and be successful.”

This is the first in a series of profiles on longtime Baylor assistant coaches. Men's basketball assistant Jerome Tang has been with the program throughout head coach Scott Drew's tenure since 2003.

Associate head coach Jerome Tang, left, has been with head coach Scott Drew, right, since Drew’s first year at Baylor. Despite opportunities to become a head coach, Tang believes his place is with the Bears.

Associate head coach Jerome Tang, right, had plans to be an NBA coach, but he believes he’s where he and his family should be.