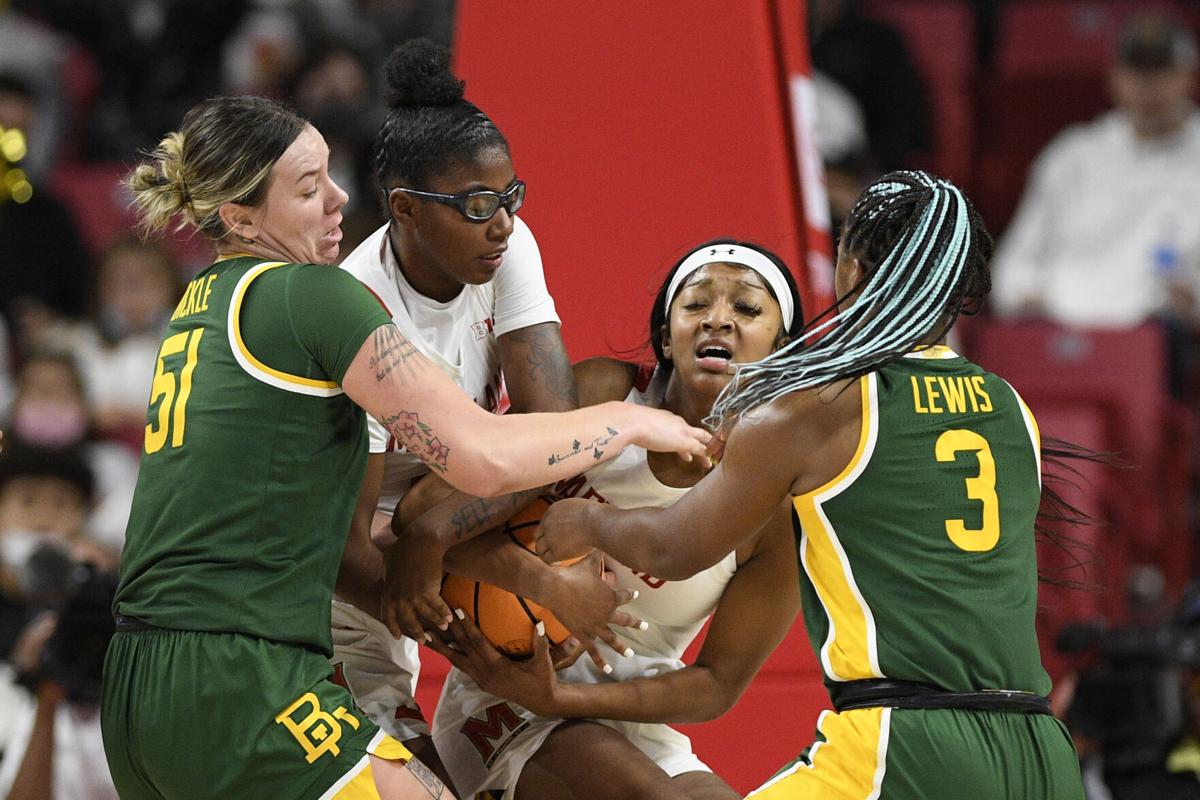 Baylor forward Caitlin Bickle (51) and guard Jordan Lewis (3) battle for the ball against Maryland guard Shyanne Sellers, second from left, and forward Angel Reese in the second half. 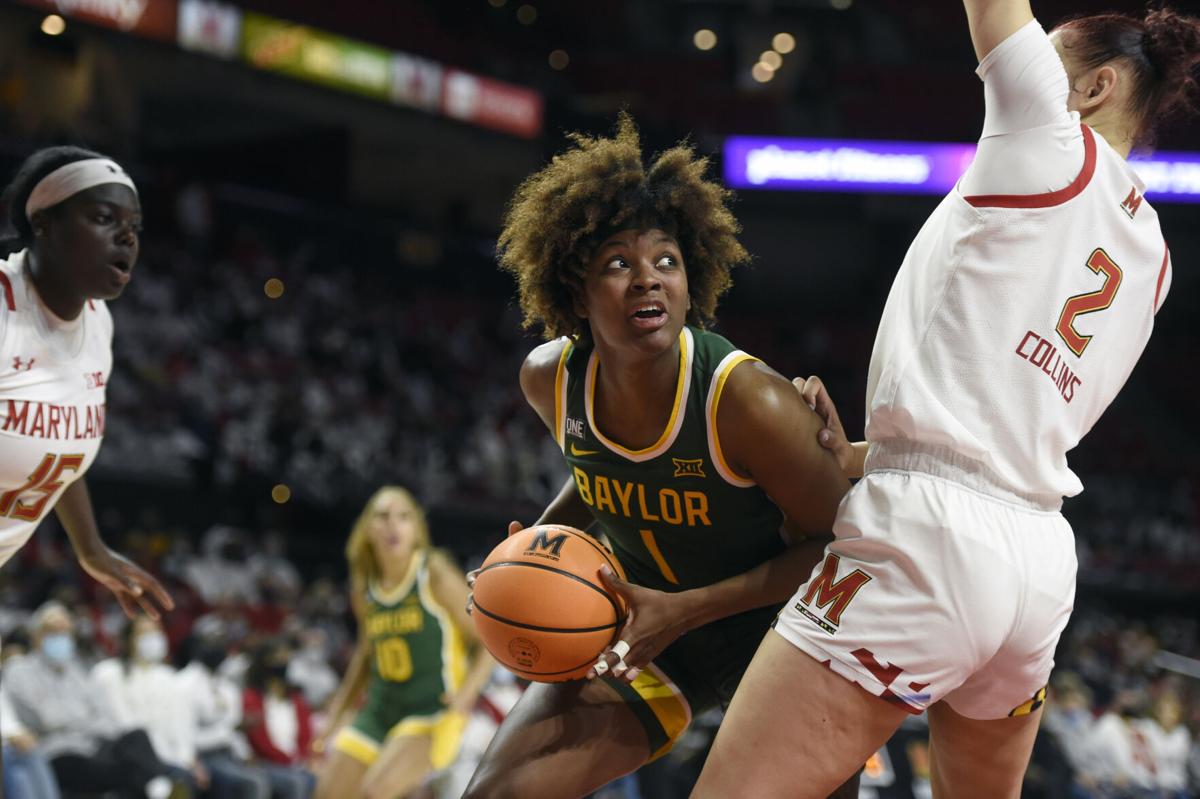 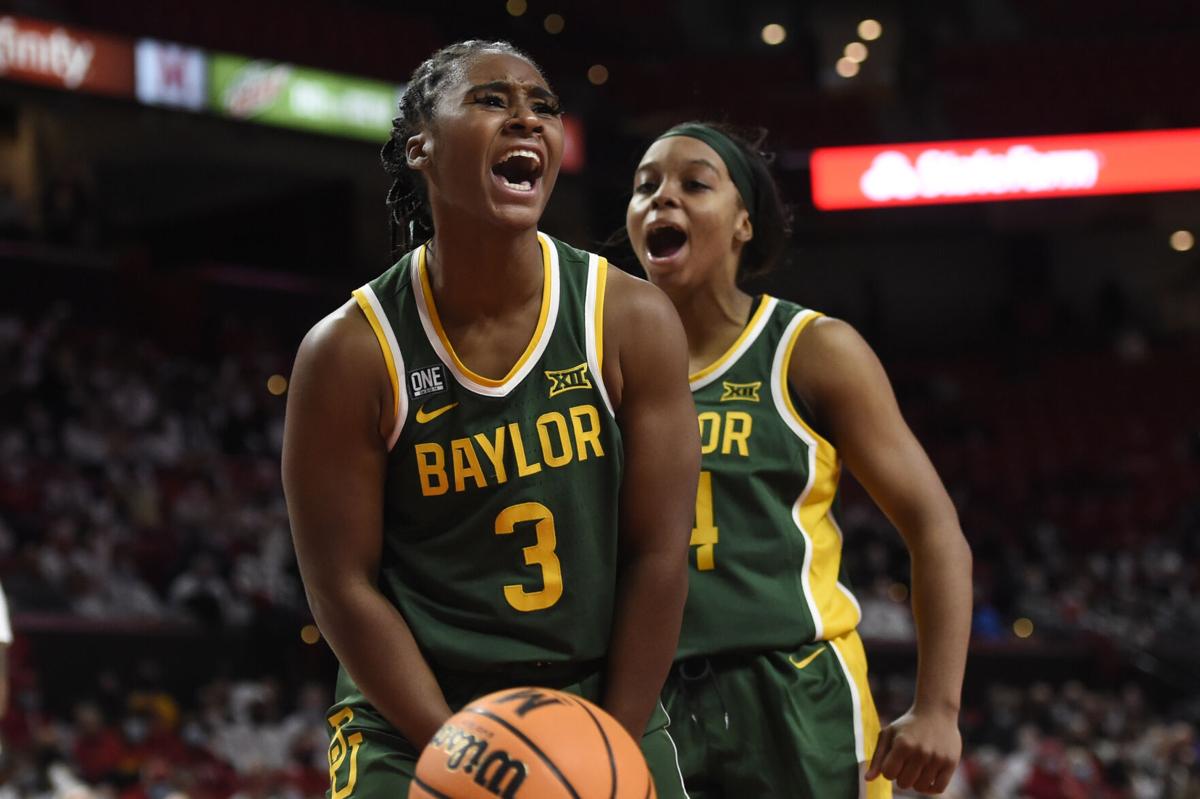 Baylor’s Jordan Lewis reacts after scoring against Maryland on Sunday.

After trailing by as many as 13 in the second half, No. 6 Baylor rallied in the fourth quarter to close the gap to a single possession.

No. 3 Maryland escaped with a 79-76 victory when Sarah Andrews’ potential game-tying 3-point attempt bounced off the rim and fell away as time expired.

“That’s what I was hoping for,” Baylor coach Nicki Collen said about the chance to go to overtime. “It was a good shot and Sarah Andrews is a good player and Jordan Lewis made the right play right there.”

The Terapins led by six in the final minute when Lewis hit a trey with 38 seconds left.

Baylor opted to play defense without fouling and get a chance in the closing seconds to tie it. That worked when Bears star forward NaLyssa Smith grabbed a rebound off amiss by Maryland guard Ashley Owusu with seven seconds remaining.

The Bears pushed the ball up the floor and Lewis found Andrews for an open shot from the left side. Baylor (3-1) was that close to pushing the game to overtime.

“It was about our fight,” Collen said. “It was about fighting to the last minute. If you’d have told me that we could come in here and have a wide-open 3 to tie the game to send the game to overtime, I would’ve been really happy.”

Smith, who scored a game high 30 points and had a big double-double with 15 rebounds, recorded her final basket from point blank range off a drive and dish by Lewis. Smith’s layup cut the Maryland advantage to 76-73 with 90 seconds left.

But the Terps responded as Angel Reese got to the basket for a bucket and got fouled by Smith. Reese made the free throw to reestablish a six -point lead and end a 10-2 Baylor run.

Lewis scored 13 points in the fourth quarter to finish with 29.

Playing on its home court, the Terapins establish their physical style of play with a big lineup. It helped Maryland get to the free throw line and make 17 of 18 while the Bears managed just 4 of 5 shots from the stripe.

“We only lost the game at the free-throw line,” Collen said. “The difference was the foul-line discrepancy. That’s not me getting up here and complaining about the officiating. … When Owusu is going to the rim, her shoulder is down and she’s going to create contact.”

Lewis scored 10-straight points for Baylor in the fourth quarter, including a 3-point play that got the Bears within five points with just over two minutes remaining.

While Baylor passed the test in some respects in its first high-profile matchup of the season and first of the Collen era, Lewis said there was no sense of moral victory in the postgame locker room.

“I think it’s going to sting regardless,” Lewis aid. “As a competitor, you don’t want to lose the game. You can obviously take things away from the game and move forward after the game, but I think it hurts. You don’t want to accept a loss at any time.”

So far in Baylor women’s basketball coach Nicki Collen’s first season leading the program, fans and critics have only been able to make guesse…

Baylor forward Caitlin Bickle (51) and guard Jordan Lewis (3) battle for the ball against Maryland guard Shyanne Sellers, second from left, and forward Angel Reese in the second half.

Baylor’s Jordan Lewis reacts after scoring against Maryland on Sunday.