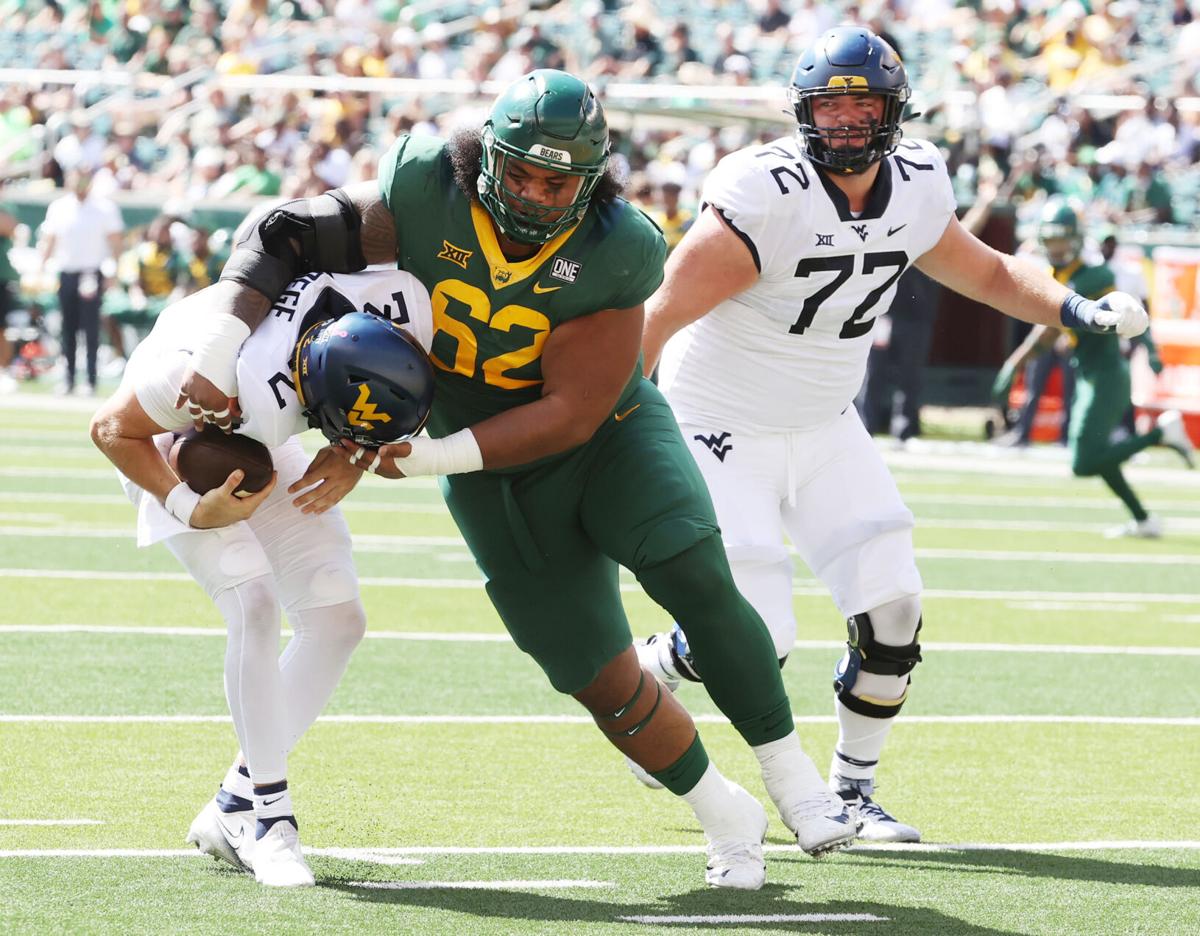 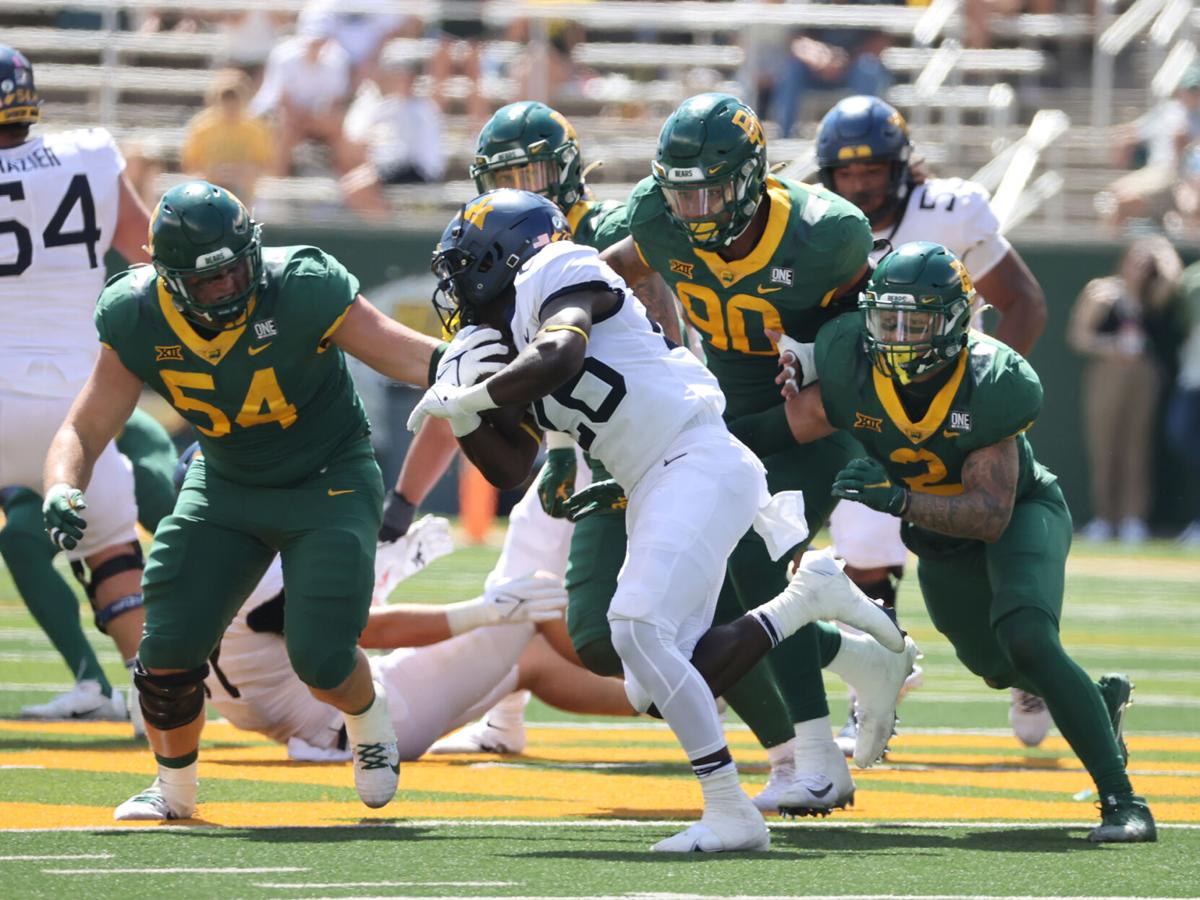 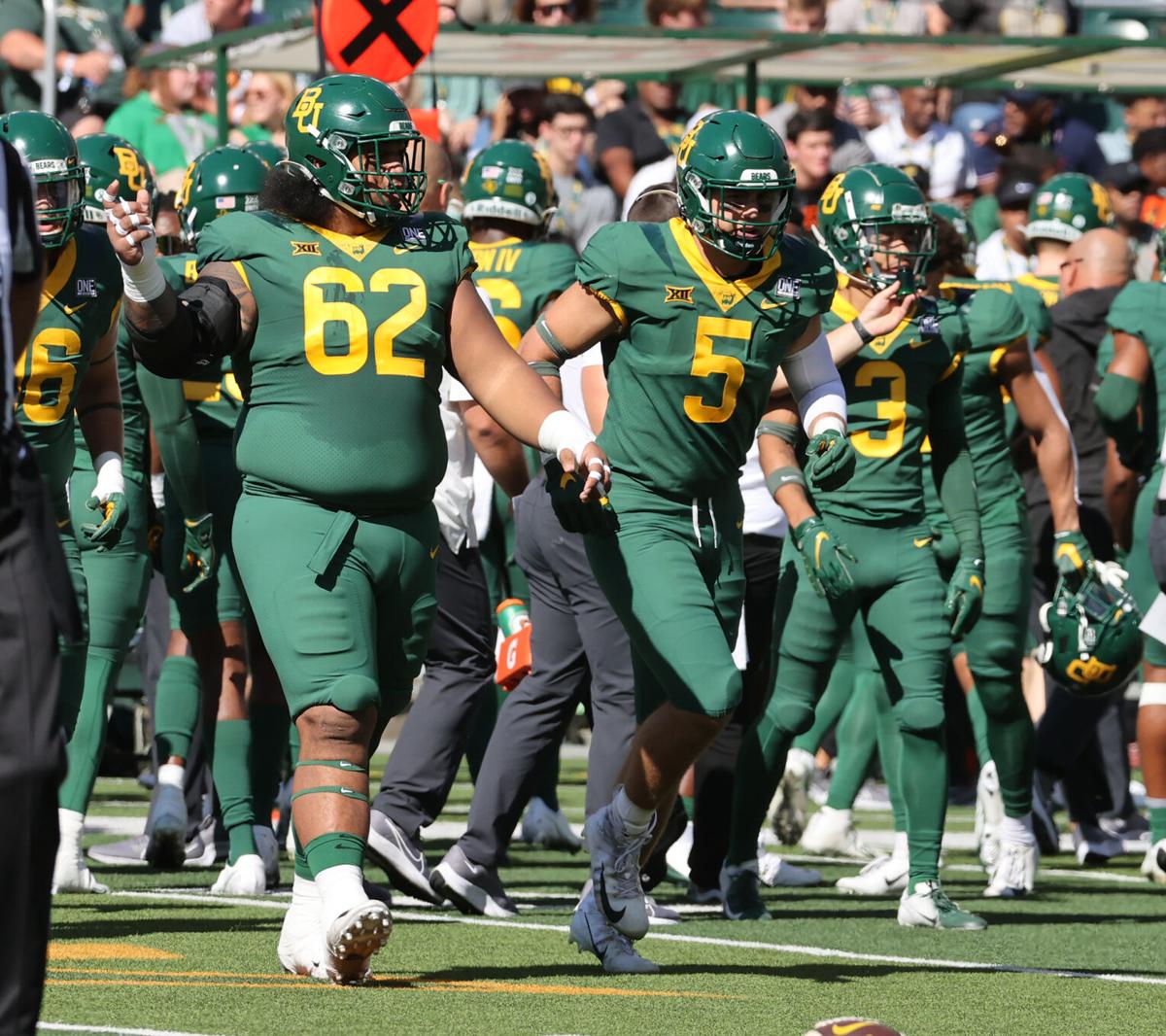 Baylor defensive tackle Siaki Ika (62) is coming off his best game in a Baylor uniform, and the Utah native will try to keep that going against BYU this week.

Aranda wants his D-line to be tough, rugged, hard-working. He wants those guys to do the dirty work of the defense. So, the analogy he has latched onto is a vehicular one. He said that he doesn’t want a bunch of high-priced sports cars on his line. He wants trucks.

“So many times a guy wants to be a Corvette or some type of sports car,” Aranda said following Baylor’s 45-20 win over West Virginia last Saturday. “But what we’re asking our guys to be is the F-150, the Chevy trucks, the Ram trucks, that type of thing. We’ve got heavy loads and we’re hauling and all of that. For that process, from a Corvette to a Ram truck, that’s quite a journey you take.”

It’s a word picture that should resonate with football fans in Texas, where two-ton Tacomas outnumber tiny Teslas probably 10 to 1. Certainly, against the Mountaineers, the Bears engaged in some of their best trucking of the season. Baylor bagged six sacks, doubling their season total. It marked the Bears’ highest sack total of the short Aranda era, topping the four sacks the team produced in games against Kansas and Oklahoma in 2020.

Baylor didn’t ramp up its pass rush out of sheer motivation. In order to tackle the quarterback, the Bears had to first tackle the running backs, Aranda said. They stuffed their sack totals by showing they could stuff the run.

“Really, we were able to stop the run and that’s what started that,” Aranda said. “There was (the idea that) this is going to be a run play or, hey, we’re defending now a pass play. Whereas when you’re struggling to defend the run, you can see everything. You’re not taking anything away. So, this is the first game this year where it was clearly stated that we’re going to stop the run and put you in passing situations, and I think that freed guys up.”

Siaki “Apu” Ika led the charge among Baylor’s unleashed D-line. The 350-pound transfer from LSU made his heftiest impact as a Bear, registering the first two sacks of his career. Up until this point, Ika had most been known for his playful dancing outbursts on the BU sideline. This was a performance that gave him a reason to shake his tail feathers even more.

“I think everyone on our team knows what he brings to the table,” linebacker Terrel Bernard said when asked about Ika after the West Virginia game. “It might not always show up on the stat sheet. It did today. But he’s a game-changer and he does a lot of things that kind of go unseen if you’re not looking for it.”

Ika may have won Baylor’s sack race, but he had friends nipping at his heels. Bernard pocketed his second sack of the season in his return from a knee injury after missing Baylor’s loss at Oklahoma State. Garmon Randolph, T.J. Franklin and Victor Obi contributed a sack apiece.

That increased level of production did not go unnoticed by Baylor’s back-end defenders. In fact, nobody appreciated the sackfest more. It’s a quid quo pro kind of thing.

But what does it really mean to be a truck? What does that look like for a defensive lineman? Asked this week to expand on the car vs. truck analogy, Aranda obliged.

“Heavy lifting, heavy duty, a lot of horsepower,” the coach said. “Can take a dent, can roll through ditches, can pull a lot of weight, push a lot of weight, I think those things. I think from the other side, the sports car imperative, it’s taking corners fast and looking a certain way. I think it’s not a lot of heavy duty work associated with those cars. Those are more Friday night and maybe Saturday night, maybe Sunday afternoon.

It’s a mindset that Baylor’s defensive line hopes to carry into this week’s homecoming game against No. 19 BYU. The Cougars have proven themselves as one of the better pass-protecting teams in the country. They’ve allowed just five sacks in their six games. That stands out as the eighth-best total in the country.

So, BYU isn’t likely to bend easily. But Aranda said that if everyone on the defensive unit does his own individual job, takes care of his own responsibility, then collectively the Bears can shine.

One guy is a truck. Together they’re a convoy.

Chris Williams of Waco's KWTX-TV, a native of Salt Lake City, Utah, joins the Trib’s John Werner and Brice Cherry to dig into the Baylor-BYU matchup, and forecast who in the conference has the inside track to the Big 12 title game. Check it out at WacoTrib.com or wherever you download your podcasts.

Baylor defensive tackle Siaki Ika (62) is coming off his best game in a Baylor uniform, and the Utah native will try to keep that going against BYU this week.