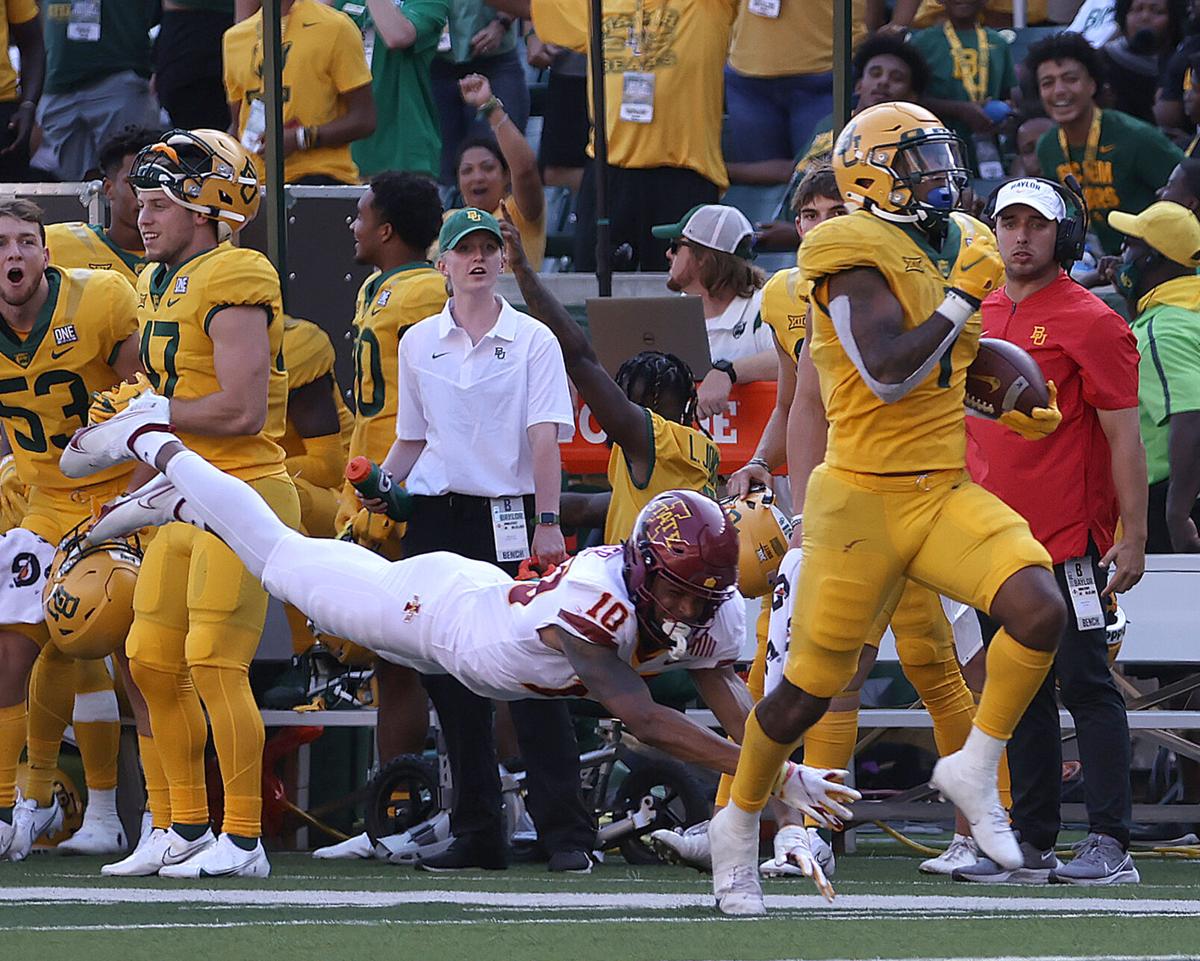 Baylor's Trestan Ebner breaks loose for a 98-yard kickoff return for a touchdown in the third quarter of the Bears' 31-29 win over Iowa State. 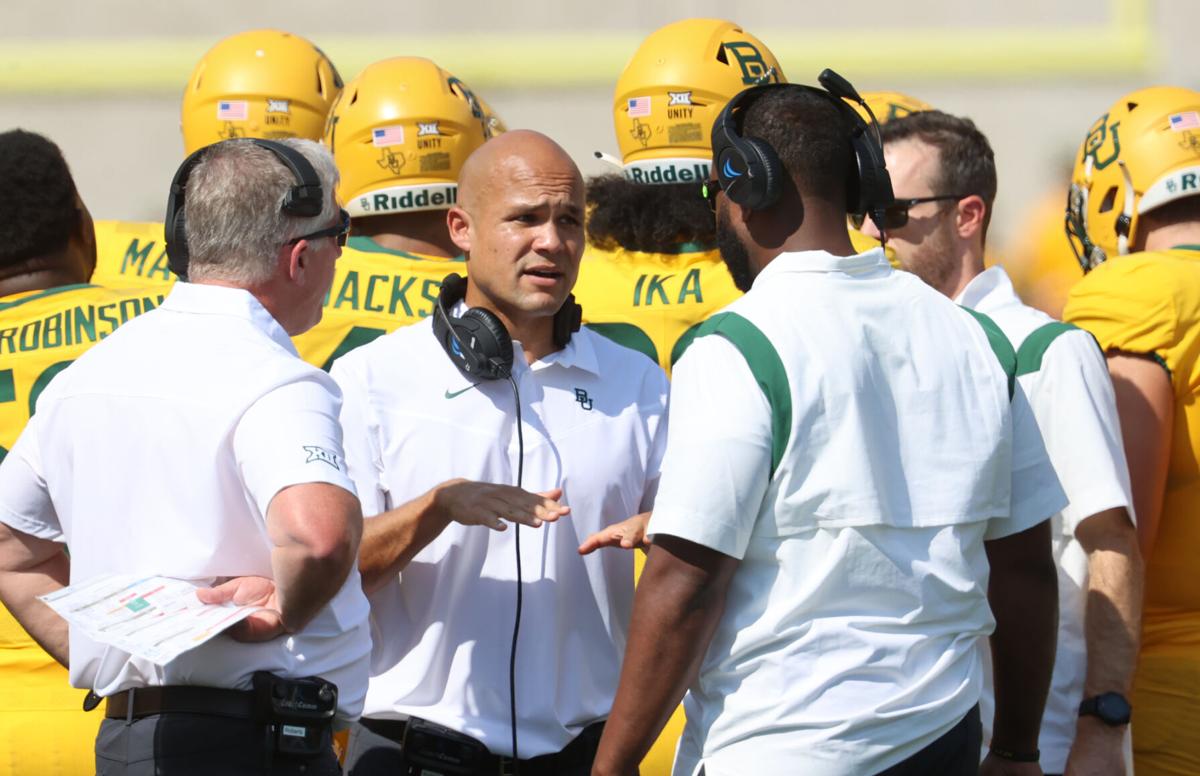 Baylor coach Dave Aranda was excited with how every area of the team contributed to a 31-29 win over Iowa State.

The dramatic improvement of Baylor’s football team is no longer Waco’s little secret.

It marks the first time the Bears have been ranked since the final AP poll of the 2019 season when they finished No. 13 with an 11-3 record. Baylor also moved into Sunday’s Top 25 coaches poll at No. 24.

Even that Matt Rhule team two years ago didn’t beat a Top 25 opponent. The Bears’ win over Iowa State was their first over a ranked opponent since Baylor knocked off No. 10 North Carolina, 49-38, in the 2015 Russell Athletic Bowl.

Coming off last year’s 2-7 finish in coach Dave Aranda’s first season, the Bears completed a perfect September at 4-0 overall and 2-0 in the Big 12. After the thriller over the Cyclones, Aranda was excited for his players and coaching staff like offensive coordinator Jeff Grimes, defensive coordinator Ron Roberts and offensive line coach Eric Mateos, who has coached the most improved area of the team.

Saturday’s upcoming game against No. 19 Oklahoma State at 6 p.m. in Stillwater will arguably be the Big 12’s premier matchup of the weekend. The Cowboys also improved to 4-0 with Saturday’s Big 12-opening 31-20 win over Kansas State in Stillwater.

It literally took a village for the Bears to beat the Cyclones, a veteran team that was picked second in the Big 12 behind Oklahoma in the preseason media poll.

Every phase of Baylor’s team – offense, defense and special teams — had big moments to beat an Iowa State team that was accustomed to pulling out close games.

“They were probably deservedly ranked No. 14,” said Baylor linebacker Dillon Doyle. “They’ve played good football this year and they played good football last year. Our thing is pound the rock. I was really proud of how we came together and did that. We played complementary football — offense, defense, special teams even getting a touchdown in there. I’m just proud of our effort and proud of our cohesiveness as a team.”

With Gerry Bohanon hitting 11 of 13 passes for 146 yards in the first half, Baylor’s offense came out hot as it scored touchdowns on each of the first three drives in the Big 12 home opener at McLane Stadium.

After the Cyclones grabbed an early 7-0 lead, Bohanon led the Bears on a 10-play, 75-yard drive that ended with his eight-yard touchdown run. On Baylor’s next possession, Bohanon threw a perfectly placed 21-yard touchdown pass to Tyquan Thornton on the first play of the second quarter.

The Bears moved 75 yards on nine plays on their third drive with Bohanon hitting wide open tight end Ben Sims for a 33-yard touchdown to give the Bears a 21-10 lead with 5:37 left in the second quarter.

It was just the kind of start the Bears were hoping for against a Top 25 team.

“The guys are a confident bunch,” Aranda said. “There’s a good, healthy amount of ego there, and there’s a good amount of love for their brother. The thought with the team would be whatever is in front of us, we’re going to try to knock it down.”

With the Iowa State defense turning up the pressure, Baylor’s offense went stagnant in the second half by gaining just 70 yards following a 212-yard first half. Though the Bears didn’t produce offensively in the second half, Aranda was impressed with how Bohanon handled it in just the fourth start of his career.

“Gerry is just confidence, the way he carries himself and the way he encourages other people and the way he’s looking to help other people,” Aranda said. “Even when the offense was off the field and it’s special teams and defense at the very end, he’s right in there helping guys and encouraging guys. So to see your team in that light and to see those connections come through is way cool.”

All-America kick returner Trestan Ebner made the difference for the Bears in the second half as he returned a third-quarter kickoff for a 98-yard touchdown followed by a 41-yard punt return that set up Isaiah Hankins’ 34-yard field goal that gave the Bears a 31-23 lead with 5:36 remaining in the game.

Baylor’s special teams were strong all around as Issac Power averaged a booming 54.5 yards on four punts.

“We talked about special teams being a big factor in this game,” Aranda said. “We’ll go through about seven things every game, these are the particular things to think about. The kicking game was a major one in this one. I think some of it stems from last year’s game (a 38-31 Baylor loss in Ames) and lessons learned, feelings and all that after that. The return game, we wanted to show our ability to be electric. I’m glad that Eb was able to follow through with that for us.”

But the Bears put considerable pressure on Purdy much of the afternoon as defensive lineman Gabe Hall collected a sack and linebacker Bryson Jackson and lineman TJ Franklin combined for one.

After Hall’s touchdown catch, Randolph delivered an intense pass rush against Purdy on the two-point conversion attempt. His off-target floater ended up in the arms of a leaping JT Woods as the Bears hung on to their two-point lead.

The Bears know they’ve got to continue to try to put together a complete game to beat Big 12 teams, especially on the road. Committing nine penalties for 100 yards nearly cost them the game. On Monday, Aranda expects to find out the seriousness of all-Big 12 linebacker Terrel Bernard’s first-half knee injury after he ended the game on the sideline on crutches.

“There was a lot of stuff that could have given them the win that we did,” Doyle said. “It was certainly a dirty game for us as far as penalties go, rushing defense goes. And those are things we have to fix moving forward. Defensively, we’re not necessarily happy with our performance. We’ve got to be better next week.”

Baylor's Trestan Ebner breaks loose for a 98-yard kickoff return for a touchdown in the third quarter of the Bears' 31-29 win over Iowa State.

Baylor coach Dave Aranda was excited with how every area of the team contributed to a 31-29 win over Iowa State.