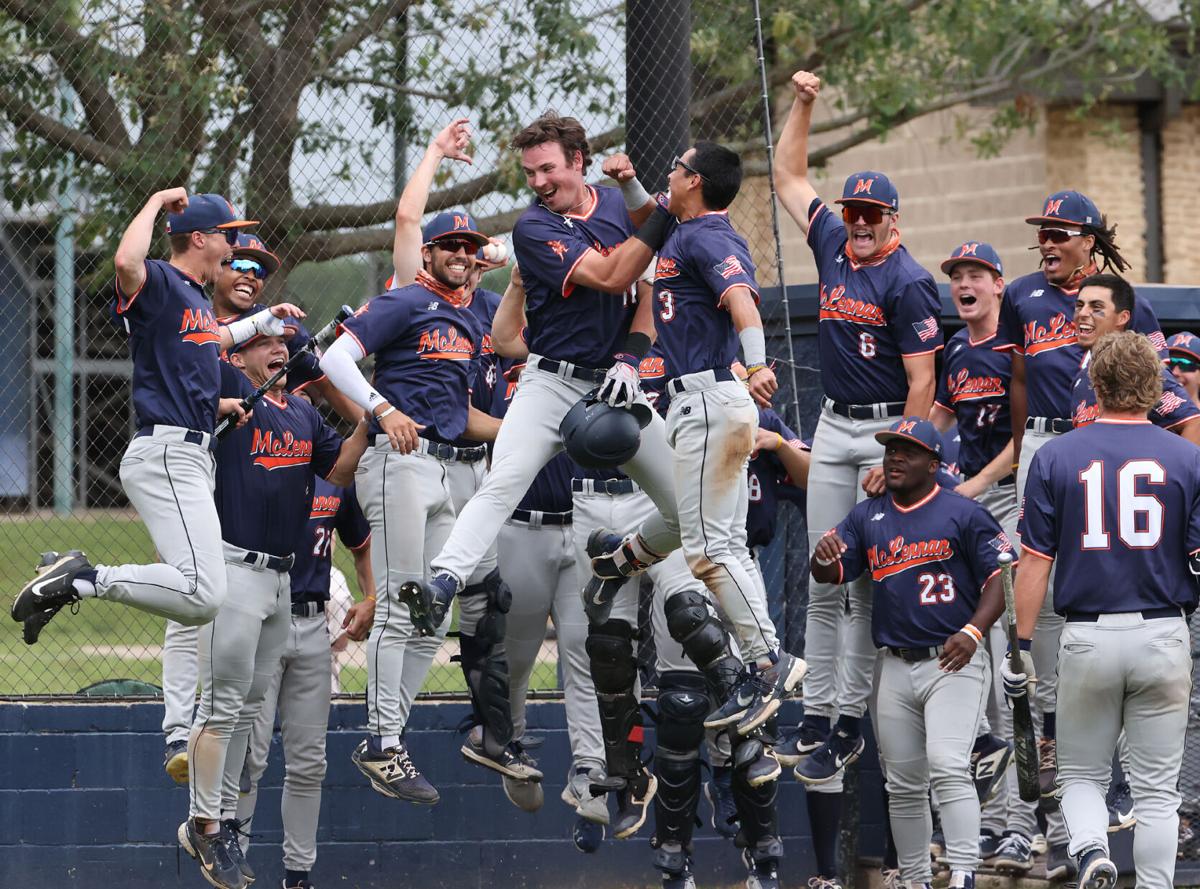 Garrett Martin, center, jumps in the air while celebrating his solo home run with teammate Miguel Santos, right, in the second inning of the Highlanders’ 14-1 win over Cisco. 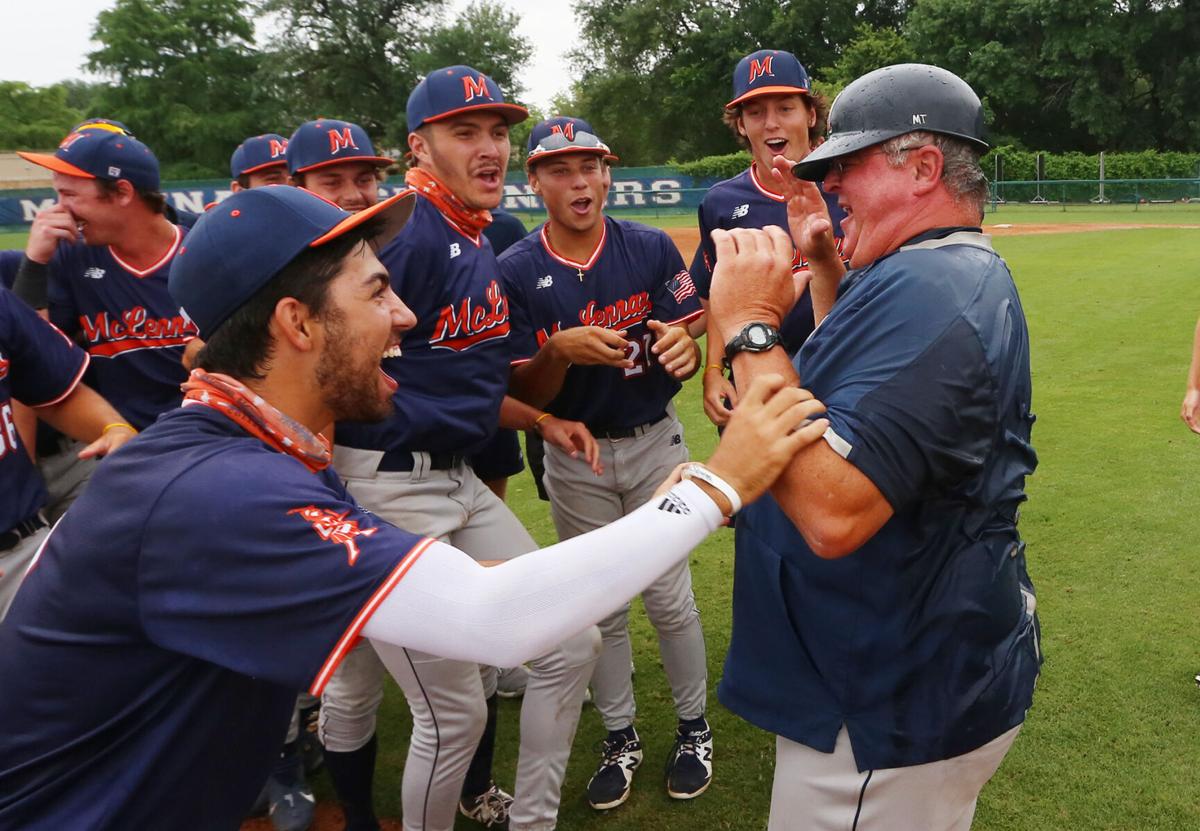 MCC coach Mitch Thompson, right, reacts to getting doused with water after defeating Cisco and earning his third trip to the NJCAA World Series. 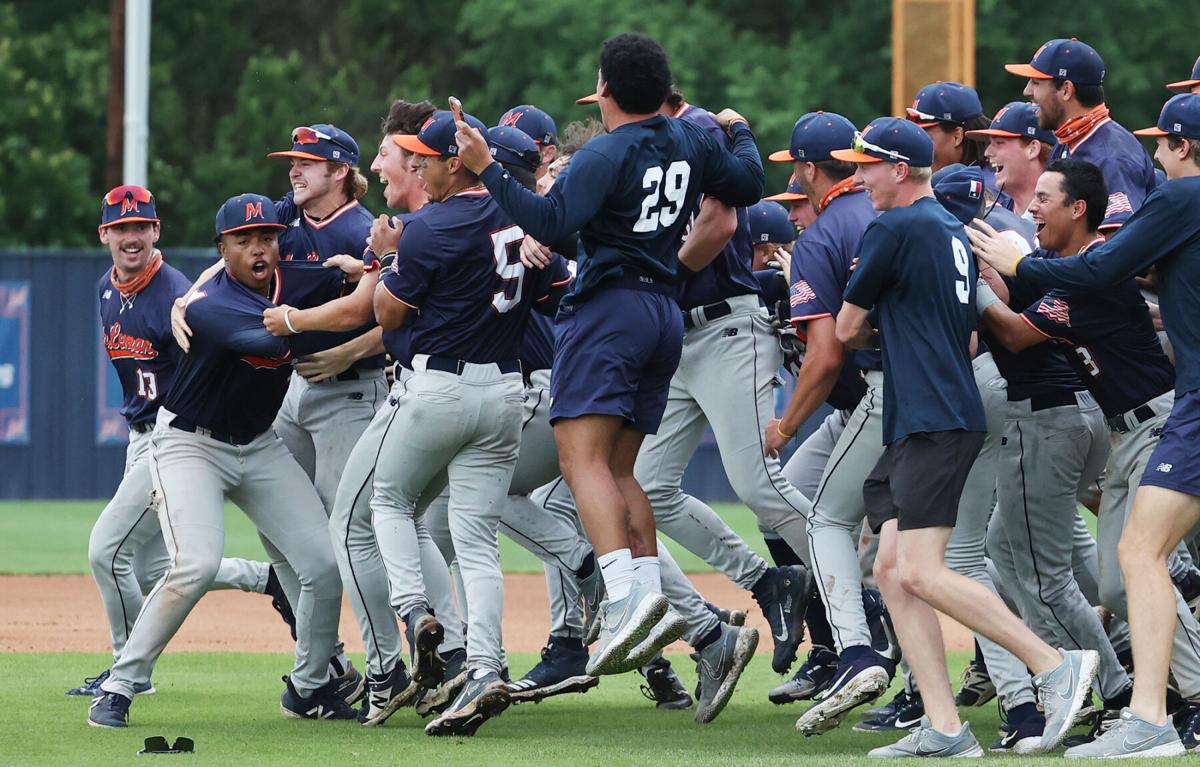 MCC players swarm the infield after defeating Cisco, 14-1, to earn their first trip to the NJCAA World Series since 2017. 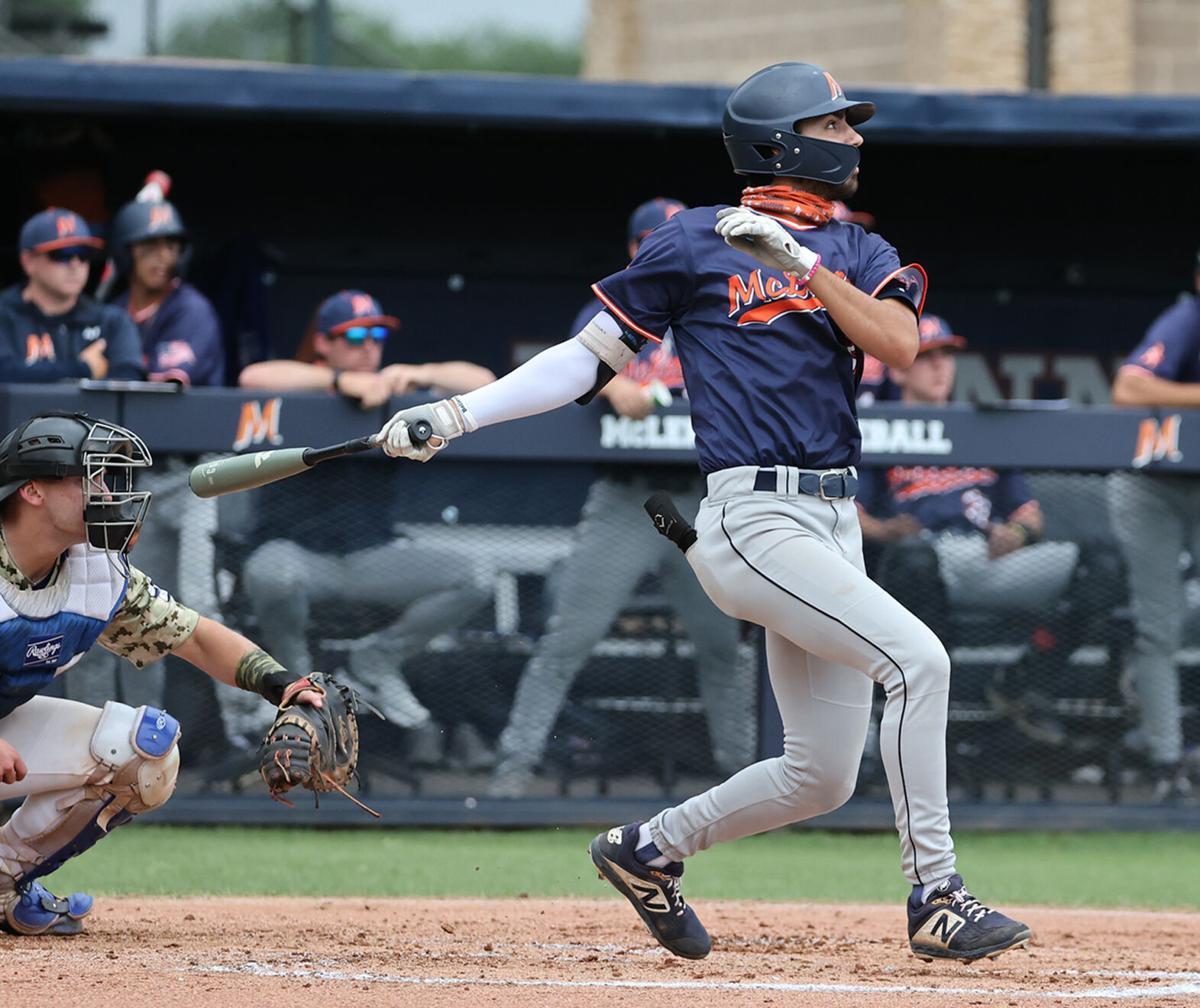 Ben Rosengard connects for a three-run double to give the Highlanders a 4-0 first-inning lead against Cisco. 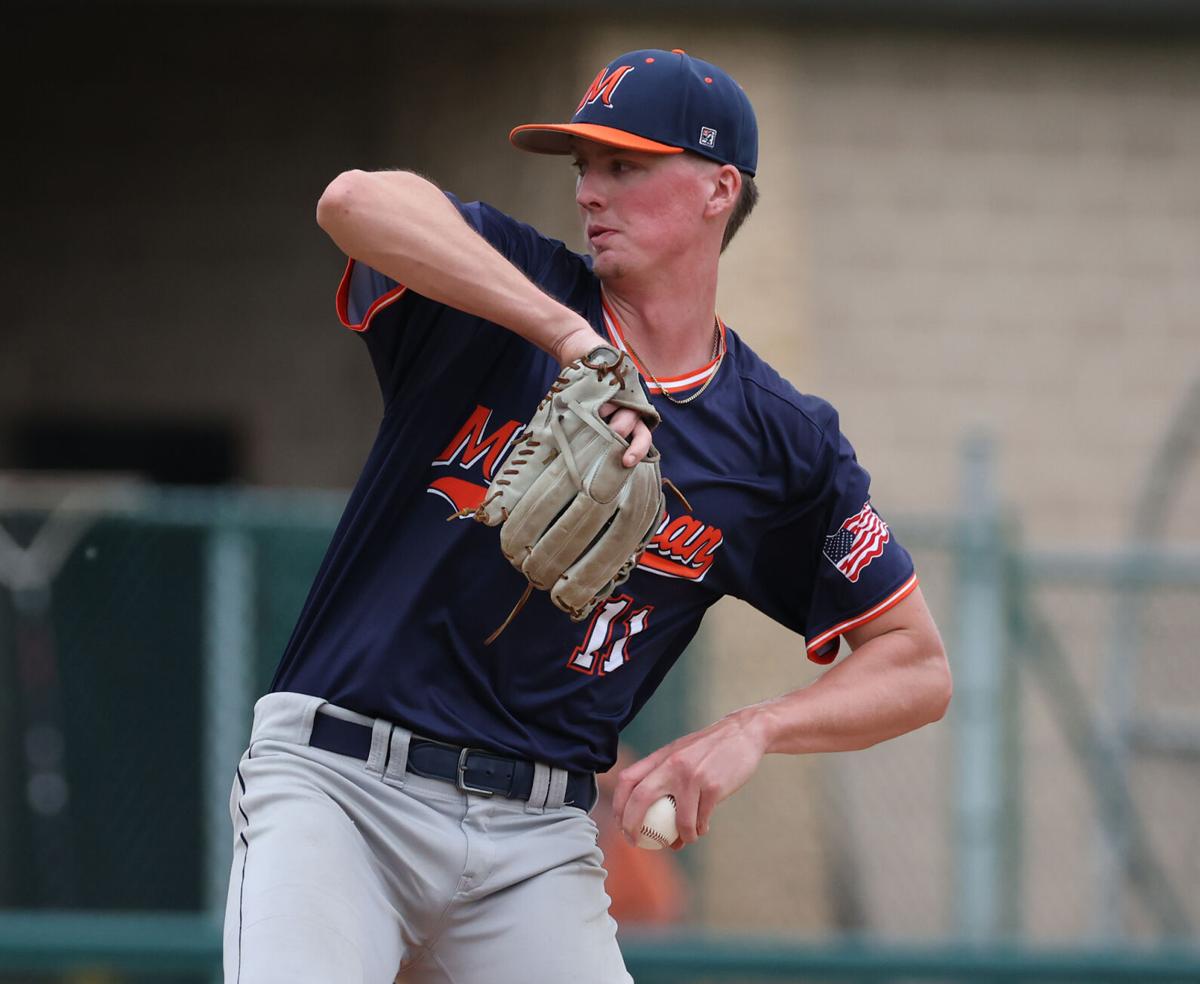 McLennan Community College won’t be happy just to get to Grand Junction, Colo. The Highlanders are playing with such confidence and drive that they believe they can win the whole thing.

With a 14-1 blowout of Cisco College, MCC finished off a two-game sweep in the Region V Super Regional on a rainy Saturday afternoon at Bosque River Ballpark to reach the World Series for the first time since 2017.

As dominating as the Highlanders (42-16) were in Friday’s 12-3 run-rule win over the Wranglers (44-17), they played even better in the Super Regional clincher as they opened up a 10-0 lead in the first three innings.

“We’re playing at our best which is exactly where you want to be at the end of the year,” said MCC coach Mitch Thompson. “We’ll go up there to Grand Junction with the idea of competing and winning the dadgum thing. We’re not just going up there to participate, I promise you that. It will be fun and a lifetime experience for these kids.”

With a 21-hit attack backing Brady Rose’s superb pitching, the Highlanders stretched their winning streak to 18 games. The World Series will begin Saturday as the Highlanders will shoot for their first national championship since 1983 after coming close in 2015 with a runner-up finish.

“I think we’ve got a pretty unstoppable team right now,” Rose said. “We’re just getting going. Everybody’s firing on all cylinders right now, and it can only go up from here.”

MCC has been hitting up and down the batting order throughout the winning streak, and that was the case again against Cisco as every starter picked up at least one hit.

“Everybody’s confident, everybody’s swinging the bats well, and it’s like the floodgates are open and everybody’s feeling good,” Martin said. “We’re playing well at the right time and everything is coming together right. It’s a lot of fun.”

Meanwhile, Rose limited the Wranglers to two singles and no walks in five innings as the Highlanders built a 13-0 lead heading into the bottom of the sixth before a three-hour rain delay.

“Nobody gets good swings on him,” Thompson said. “It’s not like he’s throwing 95 mph. He might bump 90, but he’s probably an 87, 88, 89 mph guy. They just don’t get good looks at the fastball, and I hope he continues to work his magic. He gave us the start we definitely needed.”

Santos got the Highlanders rolling in the first inning when he doubled off Cisco’s Ryan Magdic and scored on a wild pitch with two outs. After Magdic walked Dominic Tamez, Mason Greer and Alex Lopez, Rosengard doubled high off the left-field fence to bring in all three runners to give the Highlanders a quick 4-0 lead.

“It’s huge for me to be the starting pitcher in the championship game,” Rose said. “You get four runs like we did in the first inning, it just makes my job way easier, and I can go out there and have fun and do what I do.”

Santos was the catalyst again in the second inning as he drilled a one-out double and scored on Blake Jackson’s single. Jackson was nailed trying to stretch his hit into a double, but Martin followed with a solo homer. Tamez doubled and scored on Greer’s double to right field before Alex Lopez hit a run-scoring single to push MCC’s lead to 8-0.

The Highlanders weren’t content to sit on their lead as Jaylen Williams singled off reliever Danny Davis before Izzy Lopez blasted a two-run homer over the left-field fence to make it 10-0 in the third inning.

Izzy Lopez and Santos opened a two-run fifth with back-to-back doubles. The Highlanders stretched their lead to 13-0 in the sixth when Williams doubled and scored on Easton Malin’s wild pitch.

Following the three-hour ran delay, Martin opened the seventh with a homer over the left-field fence. MCC finished the game with three pitchers, including closer Landry Wideman in the ninth inning.

Thompson told his team after the game not to celebrate with a dogpile to avoid any injuries before heading to the World Series. But they were happy to celebrate winning the Super Regional on their own field.

“Our goal from the entire start was that we wanted to win it here and we did,” Rose said. “And that makes it even better.”

Who has the edge in the NL Wildcard race?

Garrett Martin, center, jumps in the air while celebrating his solo home run with teammate Miguel Santos, right, in the second inning of the Highlanders’ 14-1 win over Cisco.

MCC coach Mitch Thompson, right, reacts to getting doused with water after defeating Cisco and earning his third trip to the NJCAA World Series.

MCC players swarm the infield after defeating Cisco, 14-1, to earn their first trip to the NJCAA World Series since 2017.

Ben Rosengard connects for a three-run double to give the Highlanders a 4-0 first-inning lead against Cisco.