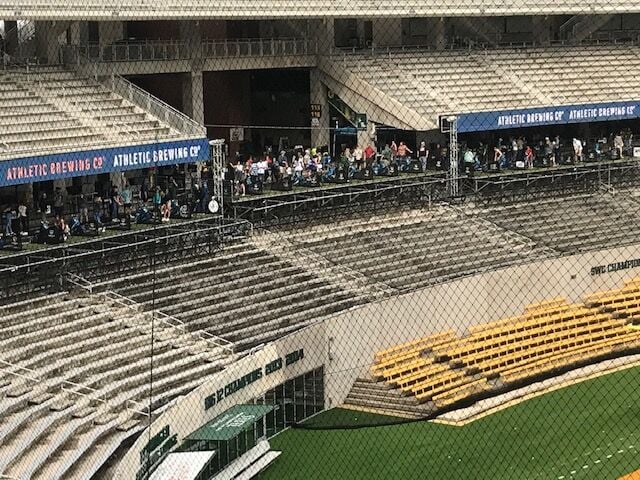 Waco-area golfers flocked to last weekend’s preview of Topgolf that was held at Baylor’s McLane Stadium. 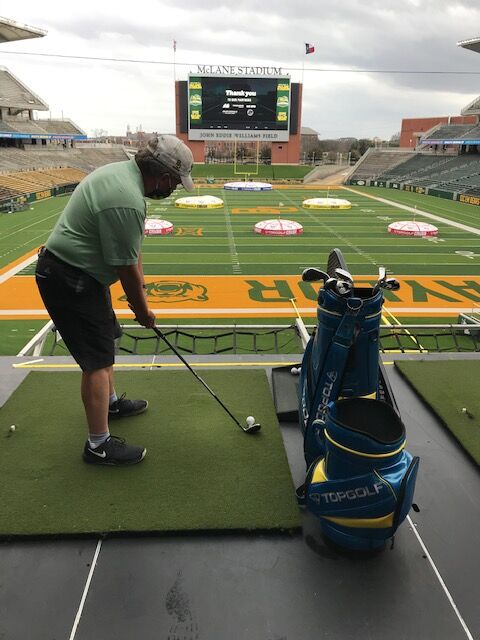 Golfers, including the author, had an opportunity to swing from the concourse level of McLane Stadium and take aim at targets on the field down below.

Delayed by the COVID-19 virus but certainly not denied, Central Texas golfers by the thousands finally got a chance to experience Topgolf up close and personal before it opens in Waco later this spring.

The Dallas-based entertainment company is bringing the outdoor golf game and overall entertainment experience to a new one-story facility in South Waco just off I-35, but the four-day preview known as Topgolf Live was held at McLane Stadium, where golfers could hit from the upper concourse of the stadium to the football field below.

With good weather and pent-up demand from the weeklong snow and ice storm, local officials said they sold more than 4,000 tickets for an hour of hitting balls at McLane. A computer chip imbedded in each ball recorded each shot’s strike on large targets on the field. The scores were then tallied on the computer scoreboard in each of the 18 bays.

Those wondering, yes, your faithful correspondent did win the straight shooter competitor, with 66% of my shots landing in the scoring zone during the four-game competition. Another Waco-area golfer, Van Walker, amassed the highest point totals in two other games.

“We had a rush of buyers near the end of the week, with Baylor students bringing a lot of groups and golfers from all over Central Texas coming,” said Greyson Williamson, the account manager for the event.

“McLane is an iconic stadium, we’re opening up a site here this spring, so it was a slam dunk to come here,” Tomasik said.

The Waco venue is Topgolf’s first in the state to feature a smaller, one-story structure. It was supposed to be already opened, but progress was delayed during the COVID-19 pandemic.

Topgolf President Craig Kessler said he understand the interest of Central Texas golfers for the new sports and entertainment venue.

“We do appreciate the interest and thanks for thinking of us,” he said, adding the facility would opening in the coming months,

While no exact opening day has been set, Topgolf recently unveiled its website for the local location — topgolf.com/us/waco — complete with color renderings of the new site along with sign-up information, prices, hours and group reservations for the Central Texas facility.

When it does finally open in the coming months, those who have seen the one-story smaller site in other cities said local golfers and those looking for a fun outdoor activity will be impressed.

“It’s a pretty fun way to spend an evening,” Robb Adams, a financial executive in Augusta, Georgia, annual site of the Masters. “The night we were there was pretty cold, but there were lots of TVs on to watch all the sports, there were servers everywhere walking around so you could order lots of food and drinks, and there was a lot of golf activities.”

While the Baylor end zone didn’t see a lot of home team activity during the Bears’ 2-7 season in 2020, there was plenty of action during the four-day Topgolf preview. During my personal four-game exhibition, I texted Baylor women’s golf coach Jay Goble with a picture of my form asking if he accepted walk-ons to his top-ranked team.

His kind response was, “Uh, no.” But starting this spring, local golfers who are seeking some outdoor entertainment can work some such form or fun, launching shots, golf and otherwise, into themselves and the Central Texas sky.

Just six months after hosting the best senior golfers in the state at the Texas State Senior Championship, Ridgewood County Club will have a chance to host the best junior golfers at the Texas Invitational on March 12-14.

The junior major championship hosted by the Legends Junior Tour of the Texas Golf Association attracts golfers from all over the state, including 15 players who have already committed to Division I programs.

“The beauty of Ridgewood is that it can host the best seniors, the best juniors and fun member play,” said head pro jimmy Cunningham. “We’re looking forward to having these elite juniors at Ridgewood to test this classic course.”

Among the local golfers who have qualified to play in the three-day event are Midway High School’s Corbin Null and Brayden Bare, both rising players, a freshman and sophomore, respectively.

MCC men’s golfers back in swing of things

After sitting out the fall season due to the COVID-10 virus, the MCC Highlanders golf team has a full schedule of four events to try and qualify for another national championship tournament this spring

Their first event ended this week in Midland with an eighth-place finish, and they have three more to qualify for nationals, where they have already captured multiple national titles.

“The problem is, since we didn’t play in the fall, all the teaching we do then has to be done in the spring,” MCC coach Vince Clark said. “We will continue to get better and get ready to qualify for nationals.”

Waco’s Bear Ridge Golf Club has been sold to a group of Waco businessmen, former owner Tommy Tompkins said Wednesday, calling it the “next gre…

Tiger Woods on playing again: 'I don't know when that is going to happen'

Tiger Woods spoke about his golf future on Tuesday in his first press conference since suffering serious leg injuries in a February single-vehicle rollover accident.

Lee Elder, who broke down racial barriers as the first Black golfer to play in the Masters and paved the way for Tiger Woods and others to follow, has died at the age of 87.

Waco-area golfers flocked to last weekend’s preview of Topgolf that was held at Baylor’s McLane Stadium.

Golfers, including the author, had an opportunity to swing from the concourse level of McLane Stadium and take aim at targets on the field down below.