In most years, high school football teams have found their midseason stride by the end of September.

But on an uneven night for both teams, the A&M Consolidated Tigers and University Trojans were clearly playing their season openers.

A&M Consolidated showed off an array of slippery backs and receivers as the Tigers distanced themselves from University in the first half and claimed a 63-13 victory on Thursday night at Waco ISD Stadium.

But University showed flashes of potential as sophomore quarterback Nik Sanders rushed for 86 yards and a touchdown. Trojans defenders Nathan Oliverez and Gerald Price each came up with a smattering of sparkling plays in the first half.

Even so, it was a night of penalties and turnovers for A&M Consolidated and University. That’s not a surprise as the two Class 5A programs officially started practice just a little more than two weeks ago.

The UIL’s plan for COVID-19 risk mitigation meant that 5A and 6A programs delayed the start of their season. Some are beginning this week, while others won’t tee it up until next week.

The A&M Consolidated Tigers got off to a faster start than their season-opening opponent.

Tigers running back Sutton Lake rushed for 131 yards and scored five touchdowns, while quarterback Kyle Willis passed for more than 300 yards and accounted for four touchdowns.

A&M Consolidated was leading, 28-7, to start the third quarter when Jude Lake returned the second-half-opening kickoff 59 yards to the Trojan 16. Sutton Lake scored two plays later on a five-yard run.

Tigers twins Sutton and Jude Lake are the sons of former University Baptist Church pastor Kyle Lake, who was killed in a tragic accident in the baptistry at the Dutton Ave. church in 2005.

Their father would have been proud as Sutton Lake couldn’t be stopped on A&M Consolidated’s first offensive drive of the season.

After Lake’s run deep into University territory was cut short by a downfield holding call, he still managed to finish off the march. Willis tossed a short pass to Lake near the A&M Consolidated sideline and the Tigers’ running back dodged the Trojan defense all the way to the 2-yard line where he dived and reached the ball across the goal line. The 38-yard touchdown put A&M Consolidated up 7-0 with 6:18 remaining in the first quarter.

Lake made sure the Tigers capitalized on a short field on their next possession. He carried twice on the three-play drive, covering all 28-yards, including a 15-yard scoring run.

However, University defensive lineman Oliverez did his part to slow down A&M Consolidated in the first half. He recovered a Willis fumble to stop the Tigers’ third drive and get the Trojans started on their first scoring march of the season.

Sanders entered the game and sparked University early in the second quarter.

The Trojan sophomore QB broke loose for a 35-yard run to the A&M Consolidated 6 and got in the end zone two plays later on a four-yard run. University’s initial touchdown of the fall cut the Tigers lead to 14-7 with 9:12 remaining in the half.

A&M Consolidated had a quick answer, though.

On the first play of the ensuing drive, Willis found wide receiver Brodie Daniel wide open in the middle of the field. Daniel outran the University defense for a 76-yard touchdown.

Oliverez intercepted a Willis pass to keep A&M Consolidated from adding to its lead later in the second quarter. But the Trojans couldn’t slow down the opposing offense for the entire period.

Willis peppered passes to Jaylon Walter and Jude Lake to cover 84 yards and reached the University 1 with less than five minutes remaining until the break. Willis then took the ball the rest of the way himself for a 28-7 lead that the Tigers would take to halftime.

Willis passed for 178 yards in the first half, while Sutton Lake rushed for 75 and piled up 113 total yards before intermission. 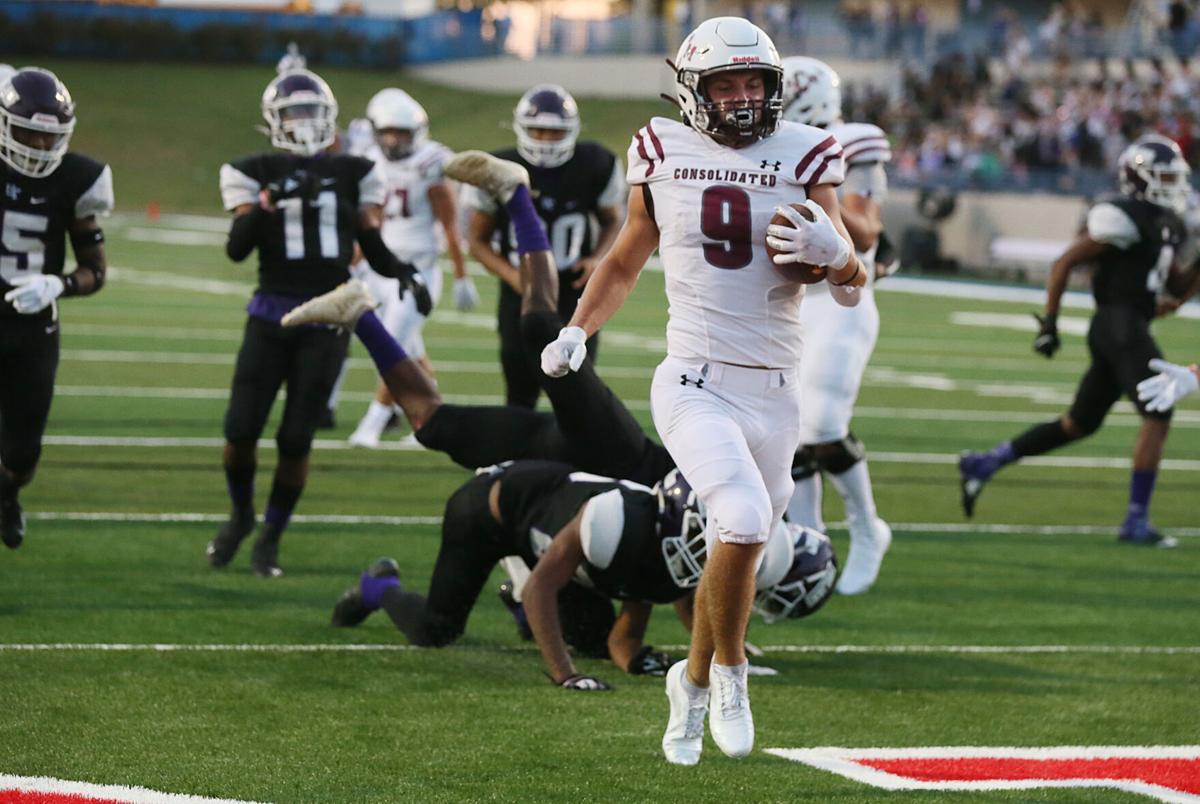 A&M Consolidated’s Sutton Lake scores a touchdown against University in the first half. 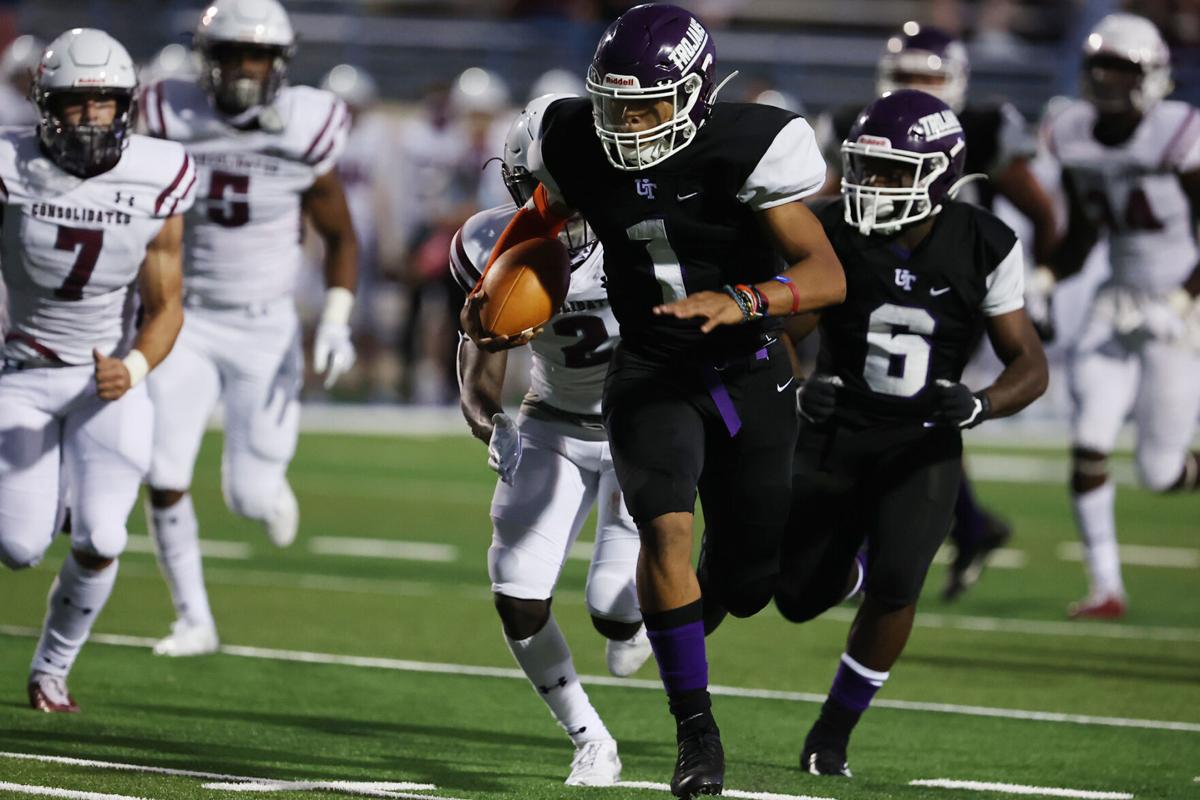 University's Nik Sanders runs downfield against A&M Consolidated in the first half. 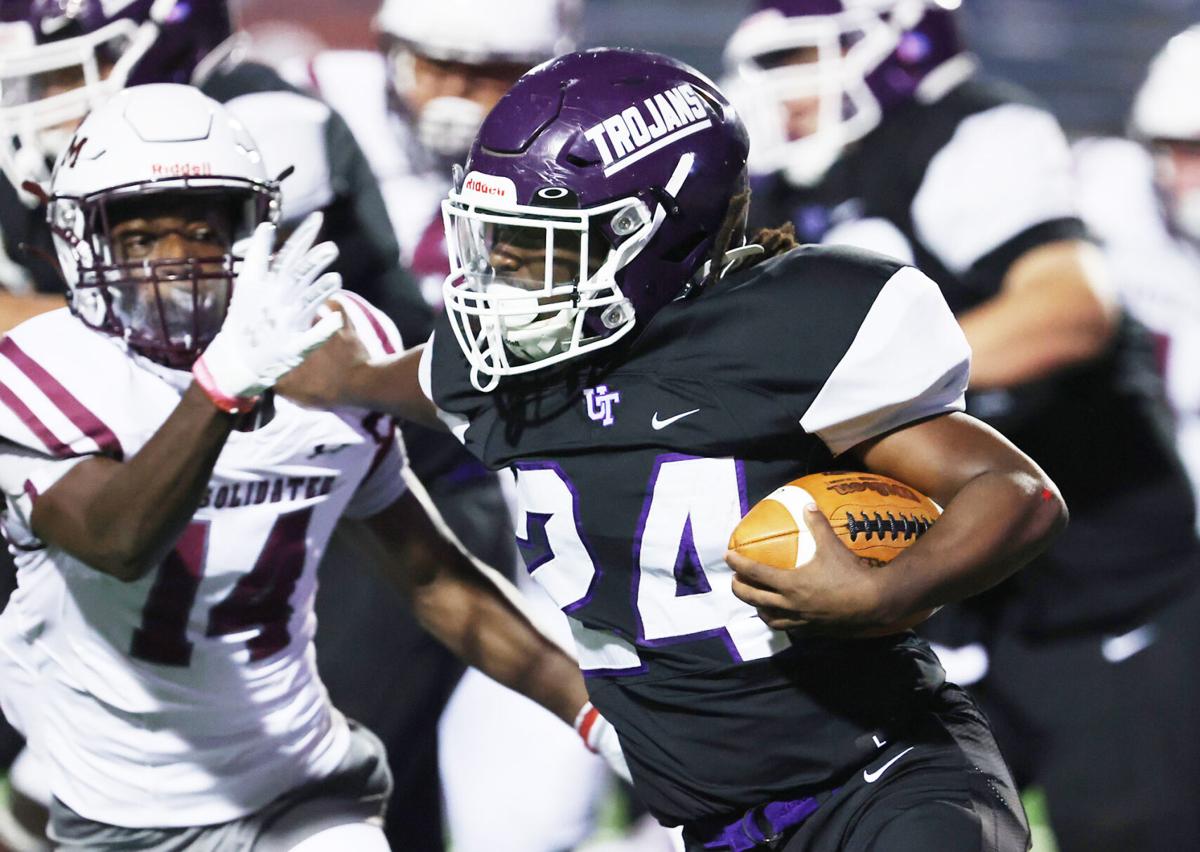 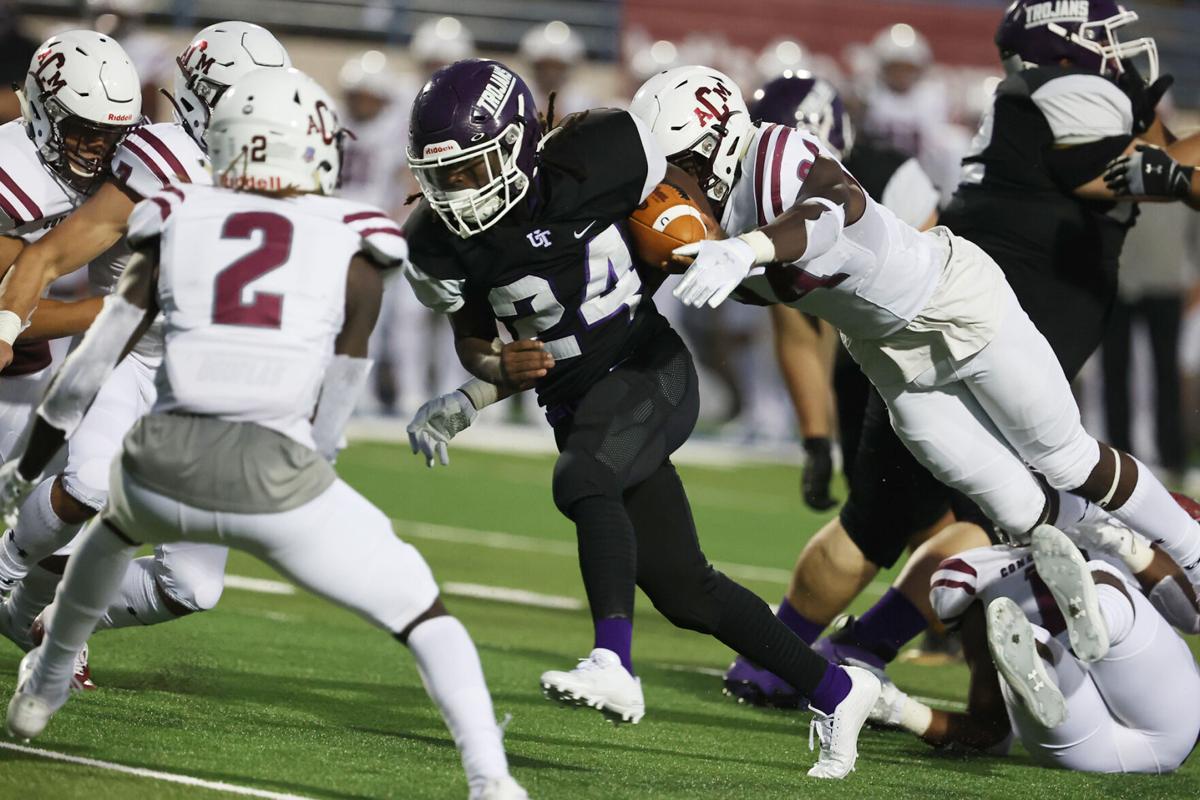 University's Joseph Carpenter gains yardage up the middle before getting pulled down by Tyndall McNamara (right) in the first half. 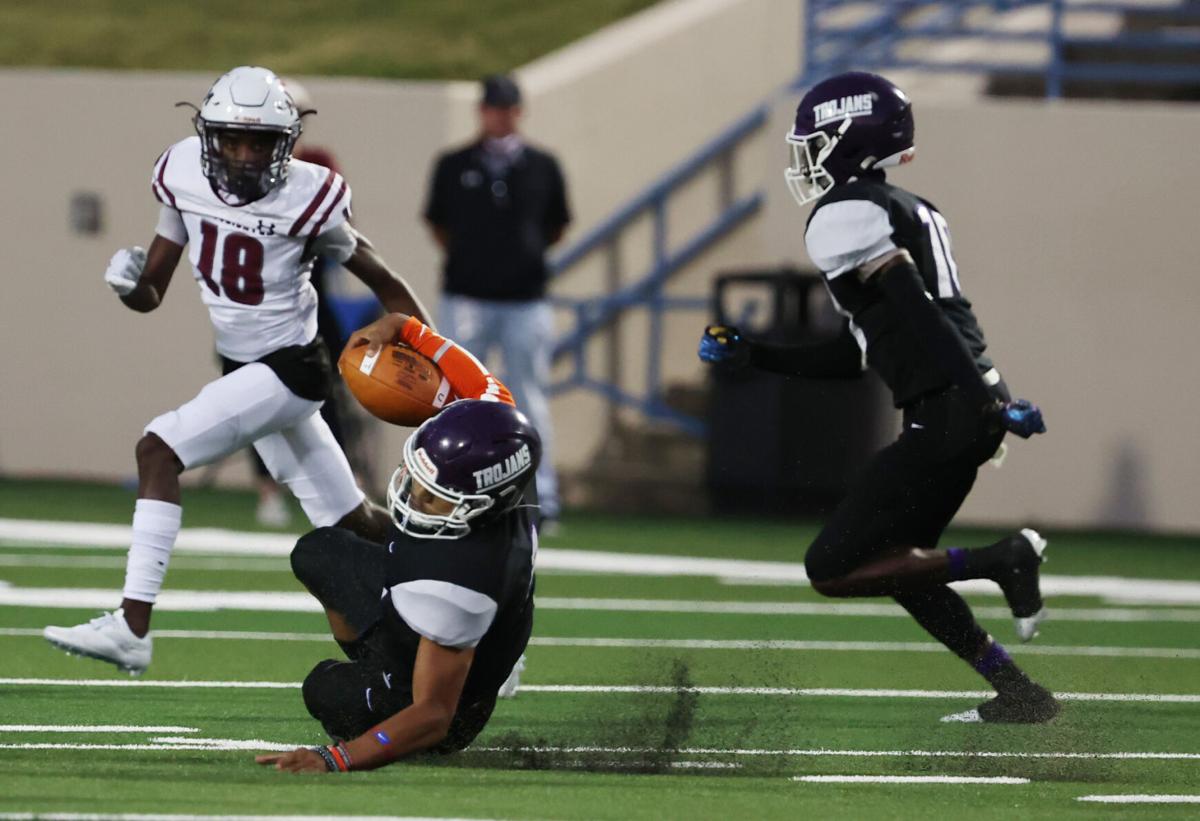 University's Nik Sanders slips on the turf after a long gain as A&M Consolidated defender Brylan Davis looks on in the first half. 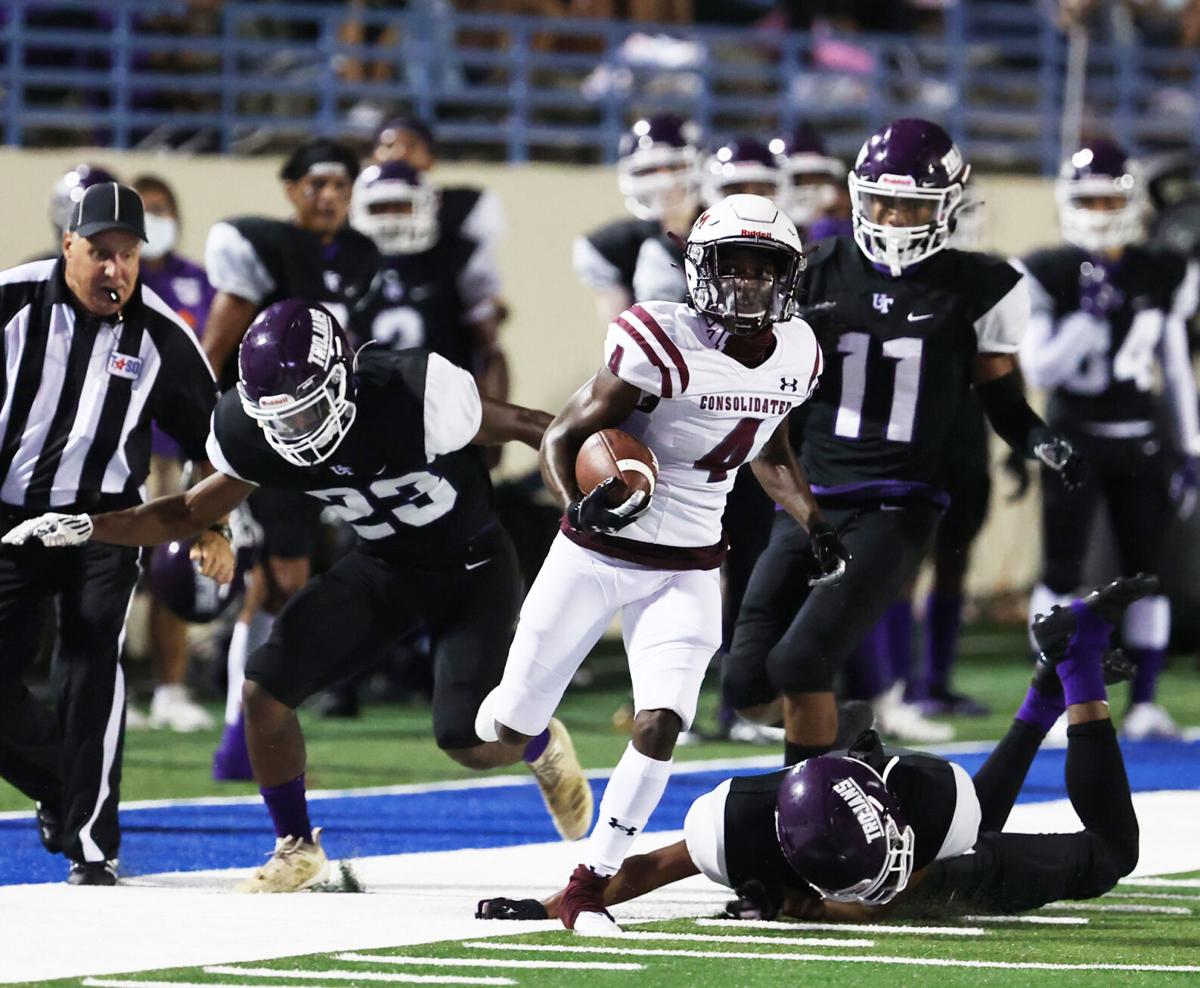 A&M Consolidated's Jaylon Walter races down the sideline while being pressured by the University defense before stepping out of bounds after a long first-half gain.