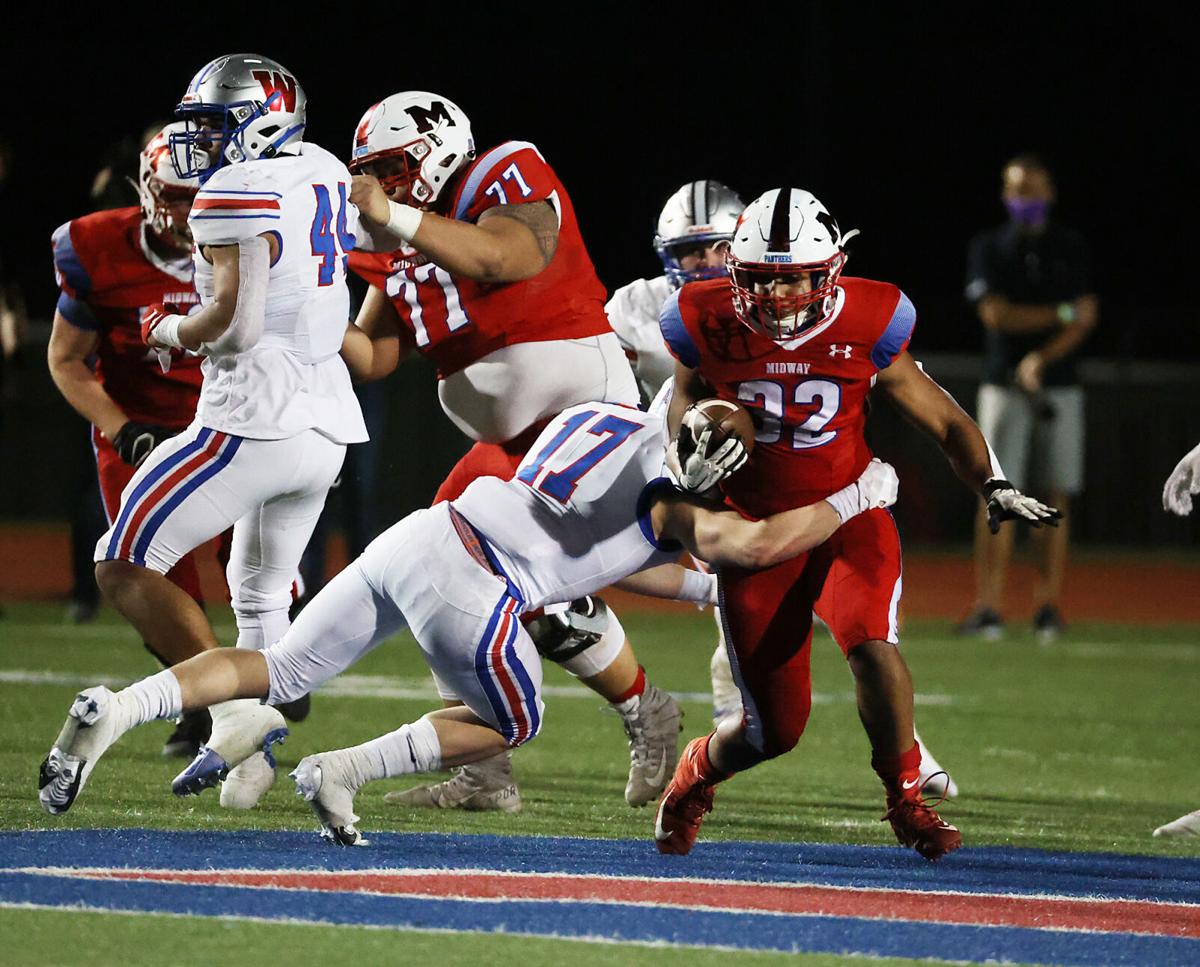 Midway’s Jaden Johnson gets wrapped up by Westlake’s Brady Lamme in the first half of the Chaps’ blowout win on Friday. 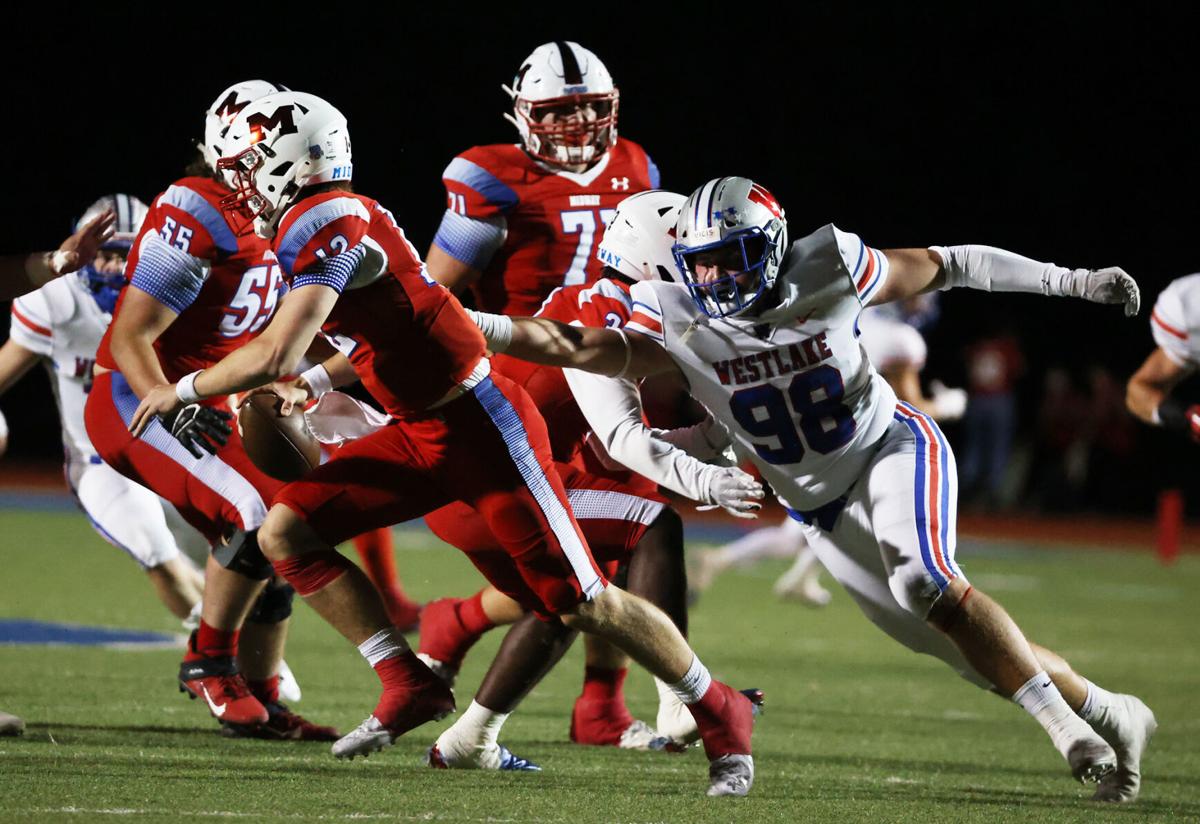 Midway quarterback Garrett Childers tries to elude Westlake's Hayden Brady  in the first half. Childers had 40 yards rushing on the night and was sacked seven times. 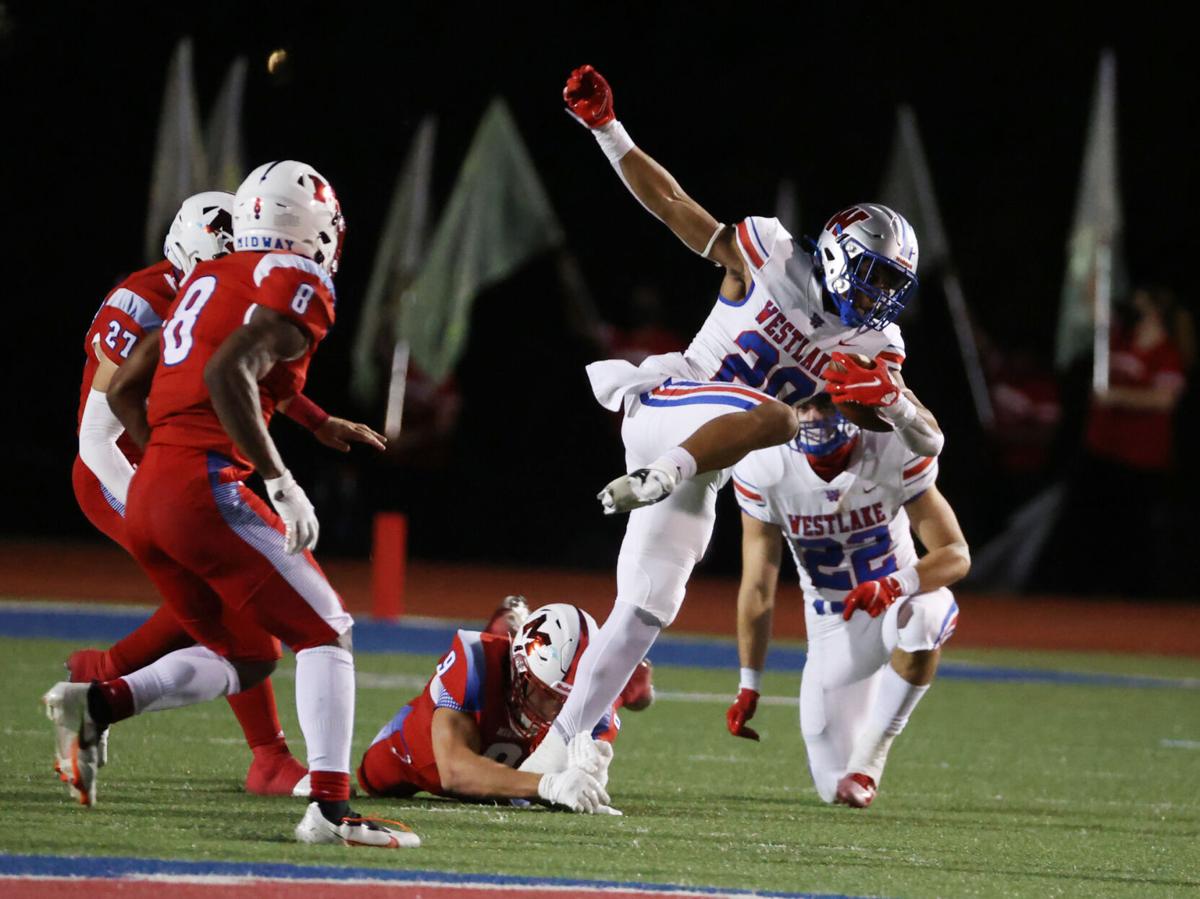 Westlake's Zane Minors is tripped up by Midway's Gus Hamlin in the first half.

The Midway Panthers football team had to wait until October to make its 2020 season debut.

The junior Klubnik was making just his second start on the Chaparrals varsity, but the four-star prospect looked like a vintage Westlake QB as he guided his team to a 56-0 victory on Friday night at Panther Stadium.

Klubnik passed for 226 yards and four touchdowns and rushed for another 49 yards in about two and a half quarters of work for the defending Class 6A Division II state champions.

That was plenty as the Westlake defense swarmed Midway all night. The Chaparrals sacked Panthers QB Garrett Childers seven times, helping to keep the home team off balance.

“I was really impressed with their defense as a whole, how they flew to the ball,” Midway coach Jeff Hulme said. “Our offensive line was overwhelmed at times. Garrett had a hard time having time to throw the ball and then he got a little gun shy. Hey, after a while you get gun shy.”

Westlake (2-0), which started its season with a 53-7 win over Schertz Clemens last week, held Midway to 137 yards of total offense. The Panthers (0-1) never got the ball past the Chaps’ 30-yard line.

After the game, Hulme encouraged his players to lean into the tough loss and let it motivate them.

Klubnik was sharp from Westlake’s first possession as he guided the Chaps 90 yards for the initial lead. The Westlake QB ran up the middle for 24 yards to kick start the drive and shifted it into high gear after the Chaps crossed midfield

Klubnik threw a 23-yard strike to Jaden Greathouse that moved Westlake to the Midway 26. Two plays later he found Nicholas Watanabe for a 14-yard touchdown and a 7-0 advantage.

While the Panthers moved the chains twice on their game-opening drive, Westlake began to swarm Childers after that.

The Chaparrals forced Midway into back-to-back three-and-outs, which allowed Westlake to take an iron grip on the game’s momentum.

Klubnik tossed the ball over the top of the Panthers defense and hit Greathouse in stride in the back of the end zone for Westlake’s second touchdown.

Midway’s defense slowed down Westlake on its third possession, but a special teams play helped the visitors add to their lead.

Chaps punter Charlie Barnett booted a kick from his own 45 that kept trickling until his teammates downed it at the Midway 1. The Panthers fumbled on the next play and the Westlake defense recovered in the end zone.

It was a mistake Midway couldn’t afford with the Chaps clicking so well on offense.

Klubnik passed for 194 yards and three touchdowns in the first half. He stepped up in the pocket and then slung a pass to a wide-open Luke Nicklos near the Westlake sideline. Nicklos toted the ball to the end zone for a 35-yard touchdown. That gave the Chaps the 35-0 they took to intermission.

Westlake ran three times to cover 70 yards for a touchdown to open the third quarter. Zane Minors, who finished with 152 rushing yards, broke loose for a 53-yard run to the Midway 1 and Grey Nakfoor finished the march with a one-yard touchdown plunge.

Klubnik’s final pass of the night was a nifty back-shoulder throw to Greathouse for an 11-yard touchdown halfway through the third quarter.

GROESBECK — When Jim Longbotham retired the first time as Groesbeck High School’s tennis coach, he couldn’t really get away.

Hubbard’s Shelby Noppeney cashed in with a big honor on Monday, being selected as the Class 1A Player of the Year on the Texas Sports Writers …

Linden Heldt has been around the block a few times, but he thinks he has found a home in Waco.

Midway’s Jaden Johnson gets wrapped up by Westlake’s Brady Lamme in the first half of the Chaps’ blowout win on Friday. 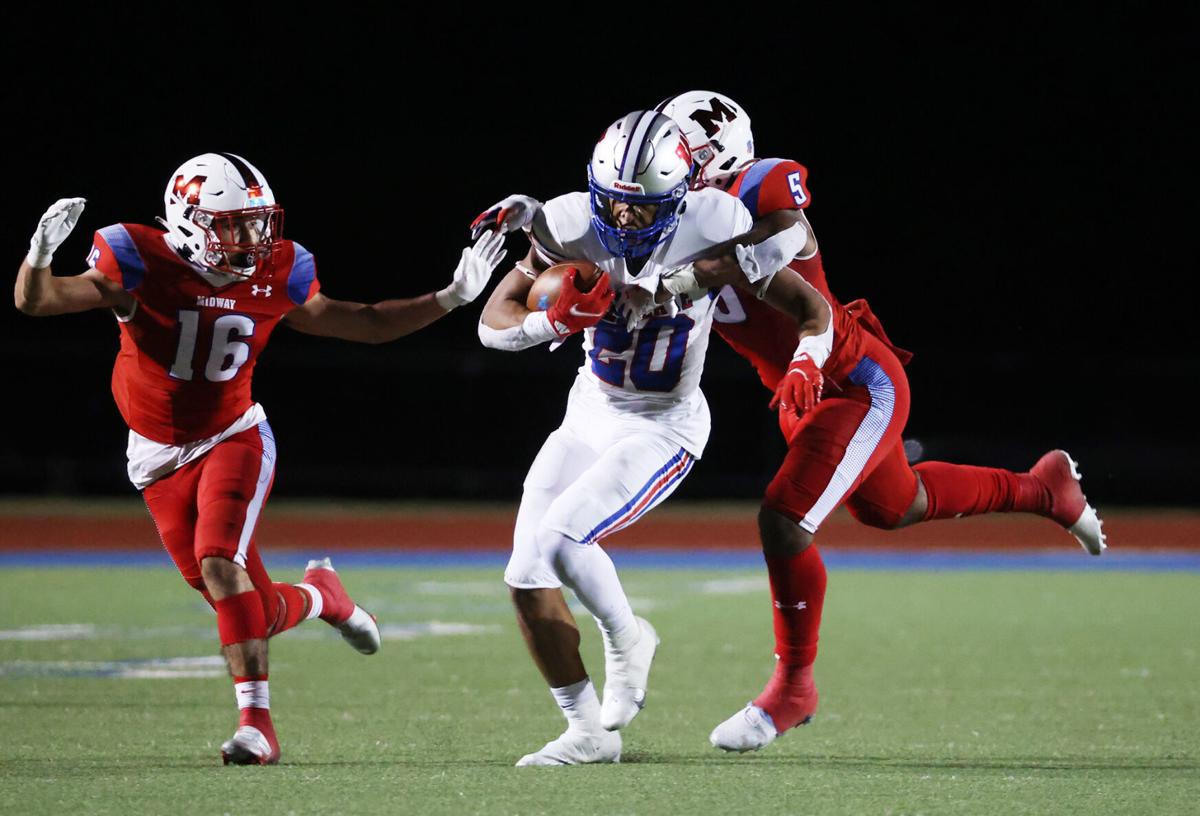 Westlake’s Zane Minors (center) is pulled down by Midway’s ZaCobie Haverly, (right) in the first half. Also defending is Anthony Rodriguez (left).

Midway quarterback Garrett Childers tries to elude Westlake's Hayden Brady  in the first half. Childers had 40 yards rushing on the night and was sacked seven times. 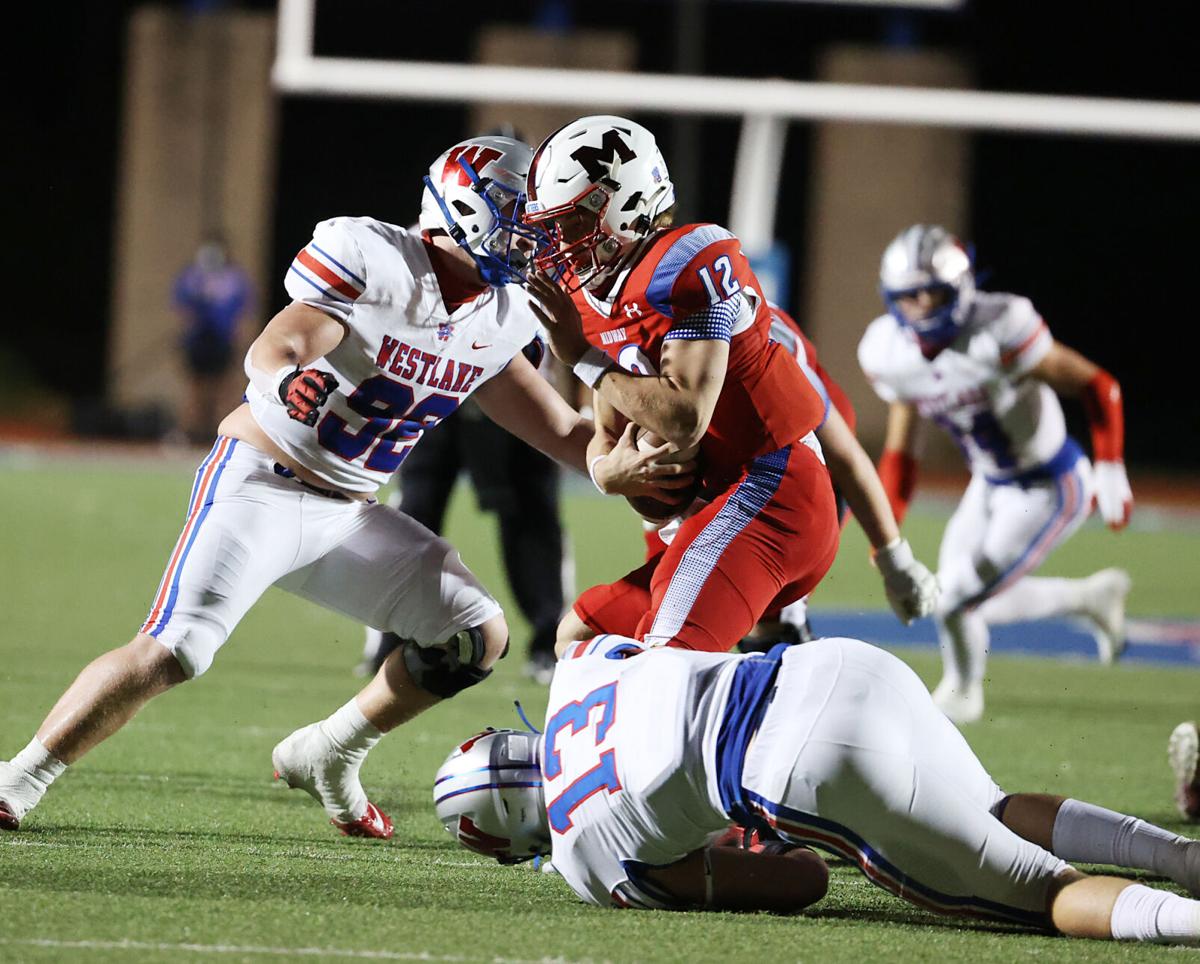 Midway quarterback Garrett Childers is wrapped up tackled by Westlake's Nick Morris (bottom) and Nick Hogan (left) in the first half. The Chaparrals sacked Childers seven times and he finished with just 33 yards passing.

Westlake's Zane Minors is tripped up by Midway's Gus Hamlin in the first half. 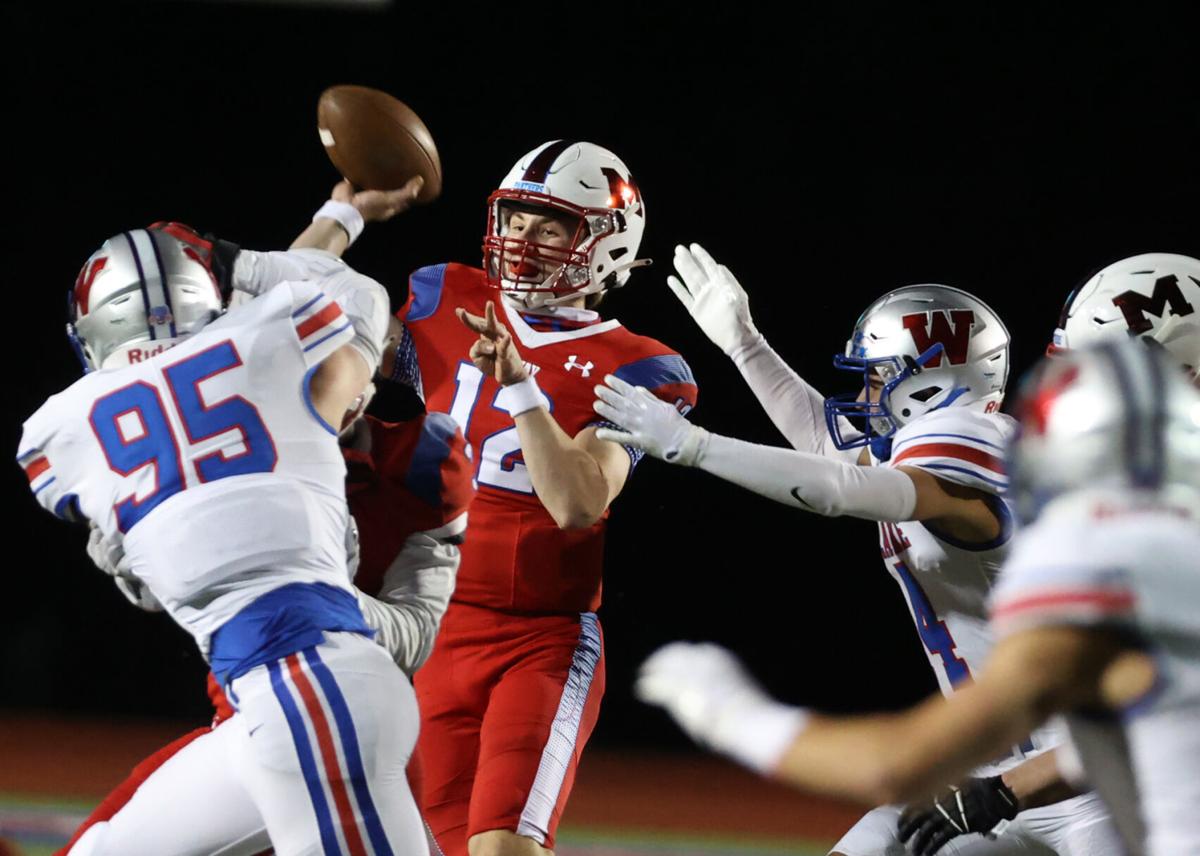 Midway quarterback Garrett Childers (center) is pressured by Westlake's defense including Braden Davis (left) in the first half. The Chaparrals sacked Childers seven times and he finished with just 33 yards passing.