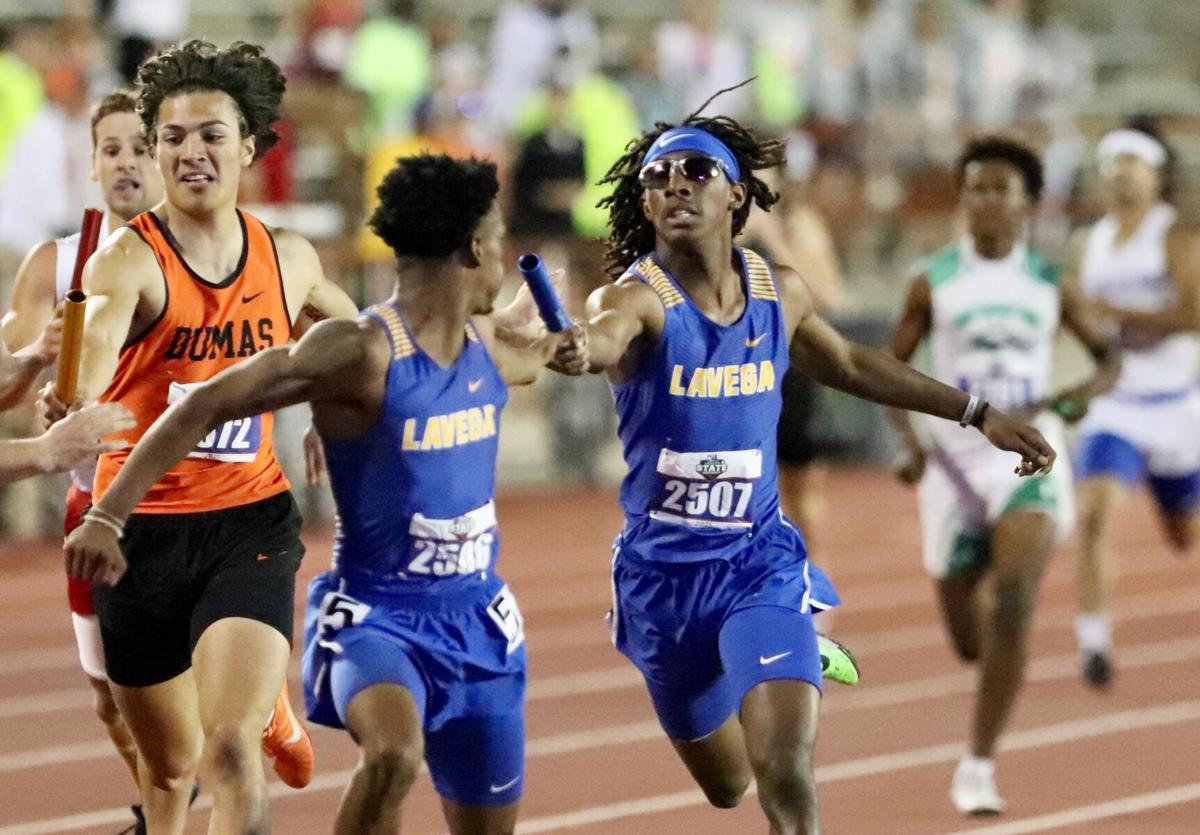 La Vega’s Jesse Majors-Sterling (front) gets the handoff from Stephon Nickerson for the final leg of the 4x400-meter relay at the UIL state meet. Majors-Sterling ran on three gold medal relays, and is our Super Centex Boys Track Athlete of the Year. 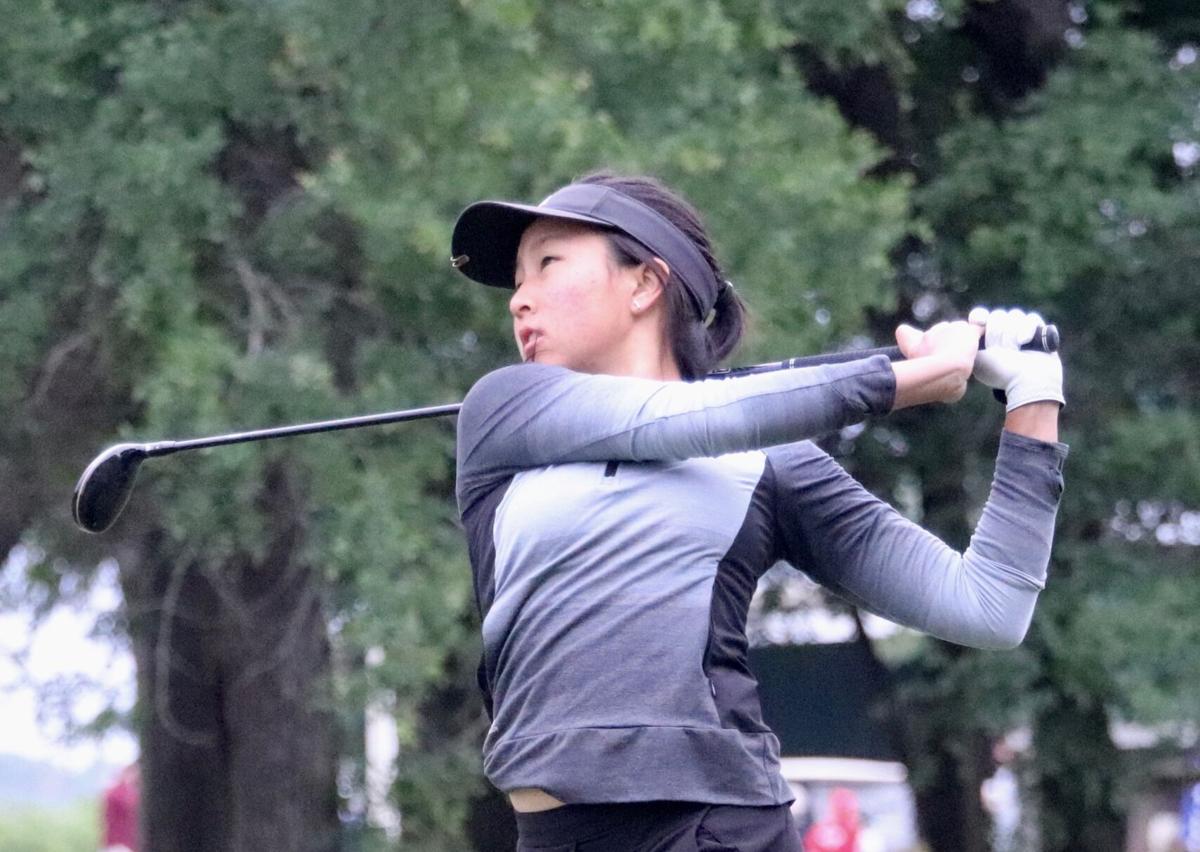 Midway's Eubin Shim finished fourth at the Class 6A state golf tournament on her way to winning Super Centex Girls Golfer of the Year. 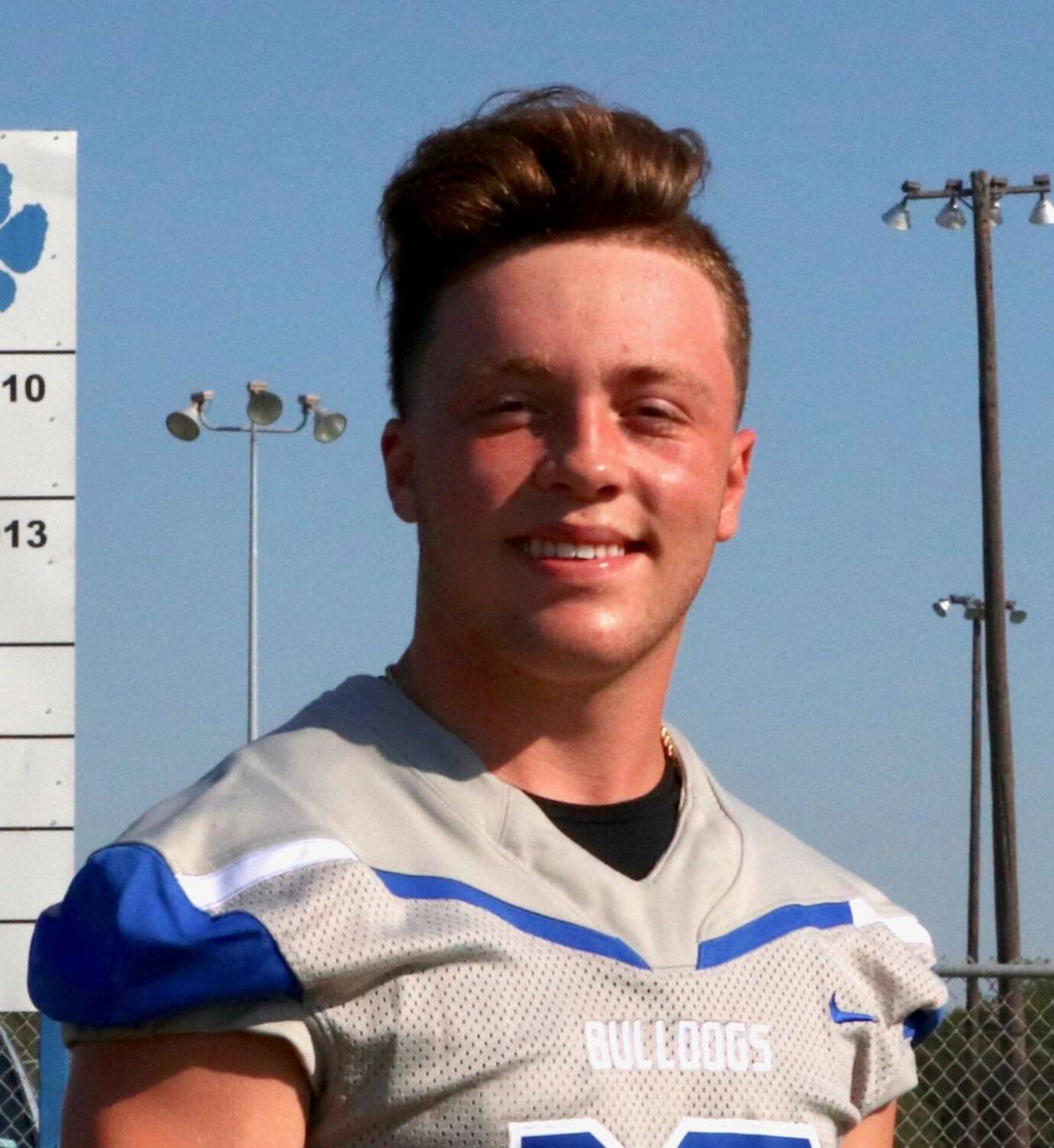 Larson Hoffmeyer is the Trib's Boys Powerlifter of the Year.

No, not the characters from the 2001 horror film starring Nicole Kidman. I never saw it, partially because I don’t watch many horror flicks but also because I’m already well-acquainted with a seriously scary group of Others.

They’re the frighteningly-good athletes in the “other” sports in Central Texas.

Each school year, the Tribune-Herald publishes 10 Super Centex teams in a variety of team sports. But we don’t want to ignore what happens in those non-Super Centex sports. We craft feature stories and interview coaches and write up results for these additional athletic pursuits, especially at the state level.

They’re not superfluous. They’re not “extra” — unless we’re talking extra special. And, so, at the end of each school year we like to christen the best of the best with Super Centex Athlete of the Year honors in these sports.

The tagline for the movie “The Others” suggests that “sooner or later, they will find you.”

As for our (spectacular) others, look no further.

Some rookie this is. Flemings set a hot pace for her high school career by winning the Class 3A title as a freshman. She carved up the course at Old Settlers Park last November, completing two miles in a winning time of 11:48.49. In the process, she became the first Central Texas girls runner to win a state cross country title since Hannah Dillard of Valley Mills in 2015.

Lengefeld didn’t dog it at state, as the Bulldog junior turned in the best finish of any Central Texas boys qualifier. He finished seventh in the Class 2A boys race, clocking 16:44.34 over the 5K course at Old Settlers Park in Round Rock. That effort paced Hamilton to a fourth-place finish in the team standings, the best of any Centex team.

You don’t have to be big to have power. Panigua proved that, as the Crawford senior won the smallest 97-pound weight class at the Texas High School Women’s Powerlifting Association state meet in March. She lifted 240 pounds in the squat, 135 in the bench press and 295 in the dead lift to take the title with a total of 600 pounds, 10 better than the next-best lifter in her division.

Hoffmeyer’s senior year was stronger than yours. Likely a lot stronger. In addition to winning district defensive MVP honors in football and starring as an outfielder on Bosqueville’s state tournament baseball team, Hoffmeyer won a state powerlifting title, too.

He captured gold in the 181-pound weight class in Division 3. The compactly-built but uniquely sturdy Bulldog hoisted a total of 1,425 pounds, with 570 in the squat, 310 in the bench press and 880 in the dead lift.

When you can put yourself in the same company as Emily Neubert, you’ve done something. Neubert may be the best all-around swimmer Midway has ever produced. Nevertheless, Biberdorf broke one of Neubert’s 11-year-old school records this year, clocking 1:10.08 in the 100-meter breaststroke at the regional meet to finish ninth in that race. Biberdorf returns as a senior team captain for the 2021-22 school year, so she’ll have a chance to pursue even more records and medals.

Petersen won the Boys Swimmer of the Meet award at the District 10-6A Swimming Championships. He motored to a district title in the 100-yard breaststroke, touching the wall in a personal-best time of 1:01.6 to qualify for regionals. After winning Belton High’s Athlete of the Week earlier this year, he said that his motto is to “never set a limit for yourself.” Given that Petersen still has two more high school years left, his future looks limitless.

Boston College’s golf program is getting a good one, that’s for sure. Shim capped off a sensational senior season with two strong rounds at the UIL Class 6A State Tournament at Georgetown’s Legacy Hills Golf Club. She shot 1-under 71 in the opening round and then followed that up with a 2-over 74, tying for third after 36 holes.

Mimi Burton of Cedar Park Vandergriff bested Shim on a playoff hole, but a fourth-place showing in the entire state in 6A remains an impressive achievement. Shim realized that even in the moments immediately after the finish. “I’m just glad I played well and was able to get in the top five,” she told the Trib’s Chad Conine.

And speaking of standout Midway golfers … it was a season to remember for Null, Bare and the Panther boys’ team. Just a freshman, Null nullified any nerves at the Class 6A state tourney at Legacy Hills. He carded consecutive rounds of even-par 72 to finish tied for 14th overall with a two-round total of 144. Bare, meanwhile, finished with a solid 3-over 147 at state, and the junior won district and regional individual titles on Midway’s run to state.

Midway made its first team appearance at the state tournament since consecutive trips in 1995 and ’96. With the likes of Null and Bare back next year, the Panthers very well could make it back-to-back trips again.

Knoll dominated this season on his way to winning the TAPPS Class 3A singles title. At the state tournament, he won three straight matches without dropping a single game before turning back teammate Aldo Ibarra, 6-2, 6-0, in the final. Knoll helped the Vanguard boys win the 3A team title as well.

Boland, a sophomore, turned in a no less impressive season. He captured the Region II-6A title with a 6-2, 6-0 win over Aidan Lee of The Woodlands. Then at state, Boland won straight-sets matches over opponents from Round Rock Westwood and Plano to reach the Class 6A singles final. He dropped a three-set heartbreaker to unbeaten Tyler Stewart of Midland, 6-4, 2-6, 2-6. But silver still shines, you know?

Perhaps not coincidentally, Knoll and Boland are both sons of former Baylor tennis coaches in Matt Knoll and Brian Boland, respectively.

Hennig has some hops, and she showed it by bounding all the way to the top of the state podium twice.

The senior won a pair of gold medals at the UIL state meet. She first captured the Class 1A high jump title by the margin of one inch, clearing 5-6. Then later that same day she added a triple jump gold by soaring 36 feet, 11.25 inches, four inches better than the silver medalist.

As usual, the Centex region ran circles (or, rather, ovals) around everyone on the track. If we listed every performer who won a gold medal in UIL, TAPPS or TCAF, we’d use an entire pallet of newspaper ink.

Few performances were any shinier than the one belonging to La Vega’s Majors-Sterling. He came home with four gold medals from the UIL state meet in Austin, one for each of the state-winning relay legs he ran and of course another for the Pirates’ Class 4A team title. Majors-Sterling laid it all out there, even breaking off a wild dive at the finish line of the 4x200 relay to help the Pirates to another win and a 4A state record. “I had to do it,” Majors-Sterling said. “I was tightening up, so I had to do it for my team. Win at all costs.”

For a school that has grown accustomed to state championships, a couple of second-place finishes may feel like a little bit of a letdown. But Crawford fans have plenty of reason to be proud.

The Lady Pirates again reached the state tournament in volleyball, falling in four sets in the championship game to Iola. Behind a young roster, Crawford also reached the state final in softball, dropping a 5-4 gut-puncher to Stamford just last week. Still, the Lady Pirates combined for a 65-11 record in those two sports. They also reached the playoffs in basketball, sent a girls doubles team to state in tennis, won a powerlifting gold, and picked up a team bronze medal at the state golf tournament.

And because it’s Class 2A, it’s often the same girls over and over contributing to another banner year.

The Leopards won district titles in two of the big three team sports, football and basketball, and also reached the playoffs in baseball. They combined to go 50-17 in those three sports, and made history with the school’s first regional tournament appearance in boys basketball, winning Super Centex Coach of the Year honors for Matt Jackson. Additionally, Lorena made a breakthrough first appearance at the state boys’ golf tournament.

Add it all up, and it’s quite a year. In fact, Lorena currently ranks second in the state in the Lone Star Cup rankings for Class 4A. That award takes into account all of a school’s athletic results as well as several other competitions like spirit, robotics, One Act Play, and marching band. The next update in that competition will be announced on June 22 and the standings will be finalized on July 1, but I wouldn’t count Ray Biles’ Leopards out.

You can’t spell Lone Star without Lorena. Go ahead, try it. Can’t be done.

GROESBECK — When Jim Longbotham retired the first time as Groesbeck High School’s tennis coach, he couldn’t really get away.

Hubbard’s Shelby Noppeney cashed in with a big honor on Monday, being selected as the Class 1A Player of the Year on the Texas Sports Writers …

Linden Heldt has been around the block a few times, but he thinks he has found a home in Waco.

La Vega’s Jesse Majors-Sterling (front) gets the handoff from Stephon Nickerson for the final leg of the 4x400-meter relay at the UIL state meet. Majors-Sterling ran on three gold medal relays, and is our Super Centex Boys Track Athlete of the Year.

Midway's Eubin Shim finished fourth at the Class 6A state golf tournament on her way to winning Super Centex Girls Golfer of the Year.

Larson Hoffmeyer is the Trib's Boys Powerlifter of the Year.