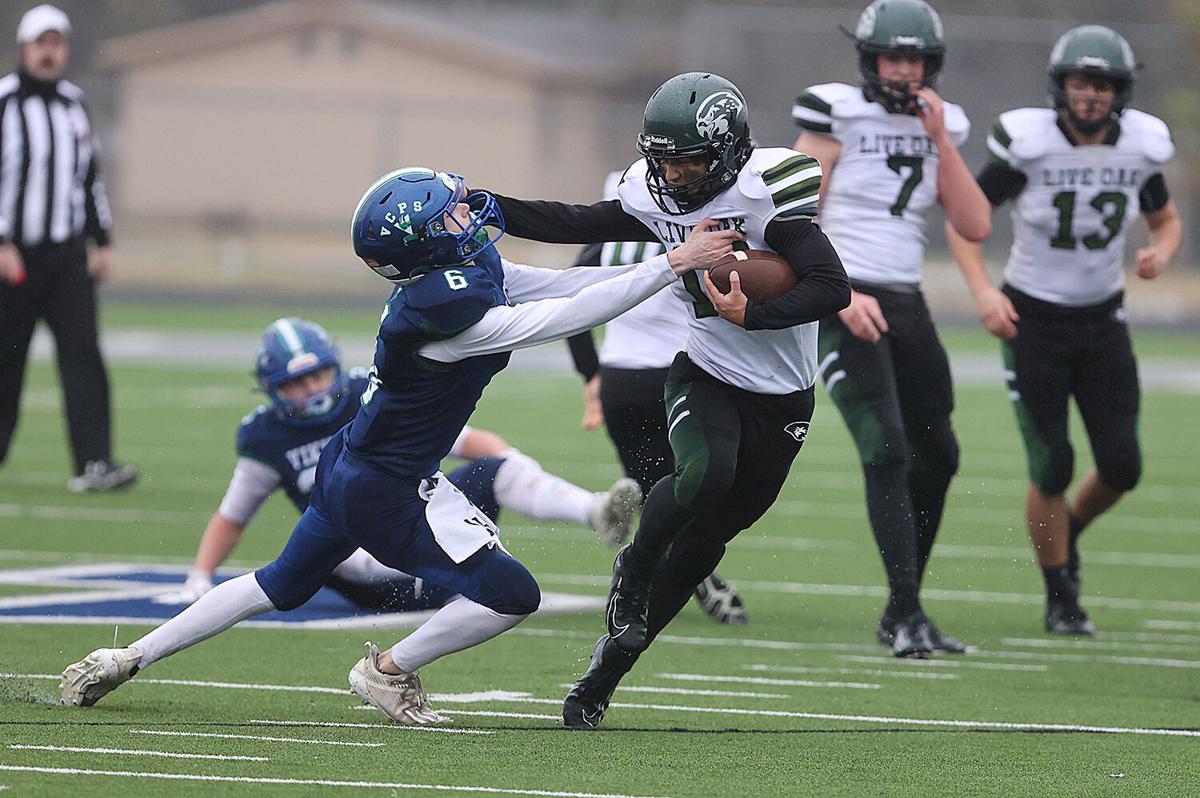 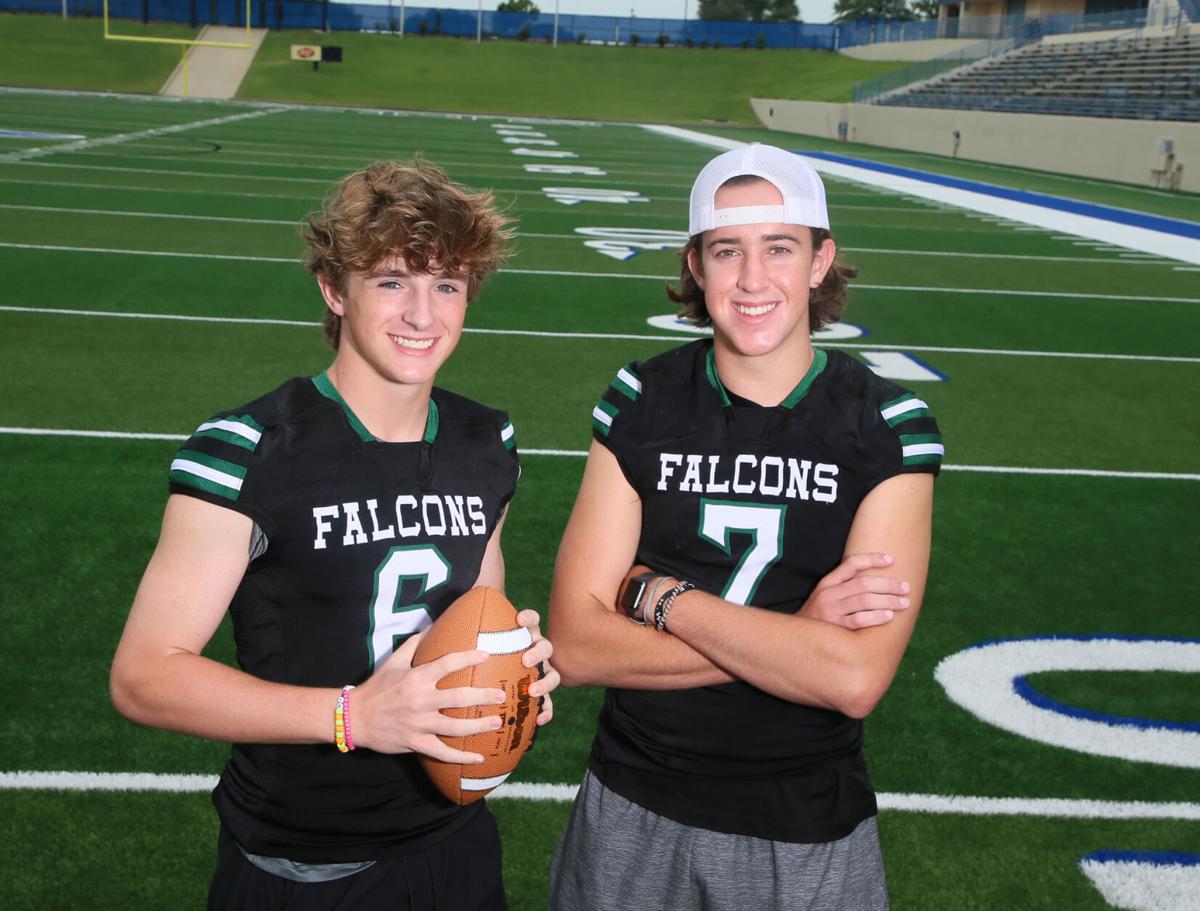 Live Oak’s Mason Peters (left) and Jonathan Buras will help spark the Falcons’ quest as they seek out another TAPPS six-man state title for the program. 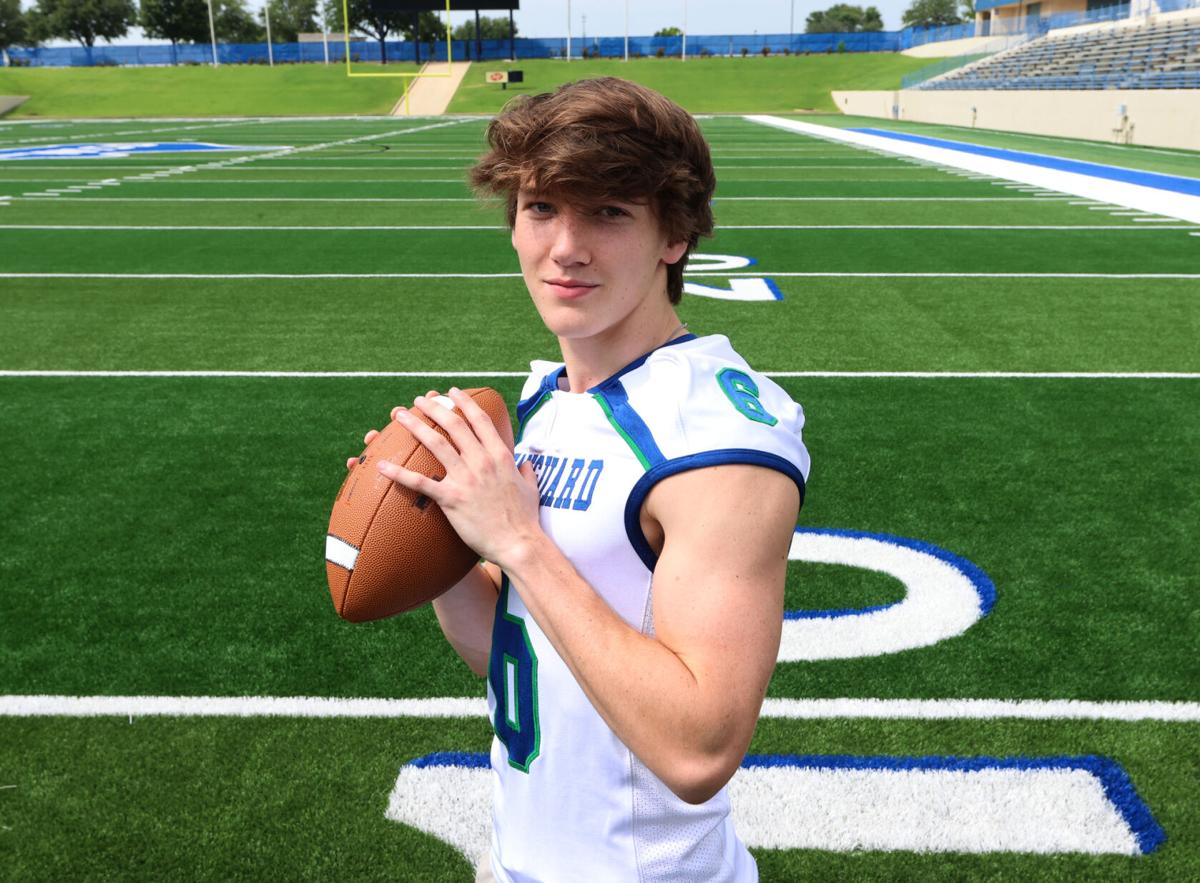 “After last year, losing both games, it’s kind of been lighting a fire under us this summer,” Vanguard quarterback Walker Nall said after mercy-rule defeats against Live Oak.

A feud doesn’t need to be nasty to be enthralling.

There is no real vindictiveness at the heart of the conflicts between the football programs at Vanguard College Preparatory School and Live Oak Classical School. They want to beat each other, not burn one another to the ground. Turns out enemies can be friends, too.

“Rivalries, the good kind, always come out of a place of respect and a healthy sense of competition against each other,” said Live Oak athletic director/head football coach Brice Helton. “Not a cutthroat (attitude) against each other. So that’s pretty easy to do with (Vanguard AD) Will Curtis. I’ve known him for years, we were in a district together when I was in Dallas. So I got to know him well before coming down here. … You always want that for the kids in a good, healthy way.”

But that congeniality does not dull the intensity of what has fast become one of the best football rivalries in Central Texas — and certainly the most underrated.

Live Oak’s Falcons and the Vikings of Vanguard maintain two of the top private school six-man programs not just in the area, but the entire state of Texas. So, naturally, when they both show up on the same field on the same night, sparks will fly.

“I wouldn’t call it friendly,” said Live Oak running back Justice Ishio, chuckling. “They’re always on our target list, they’re the team we’re always watching. We always want to knock them out of the park every time.”

Before 2011, Vanguard didn’t field a football program. From the time of the school’s founding in 1973, Vanguard rolled out dozens of successful athletic teams, mostly in basketball. When it finally made its foray into the six-man football world 10 years ago, it introduced a similar winning formula. The Vikings have produced six winning seasons and made the playoffs seven times in that stretch.

But it speaks to Live Oak’s level of excellence that Vanguard still finds itself trying to chase down the Falcons. Live Oak’s football history dates back only two more years than Vanguard’s, but in that short time frame it has established a golden (trophy) standard. The Falcons feature a 104-40 all-time record while seizing four state championships, two in the Texas Christian Athletic League (TCAF) before adding two more in the larger Texas Association of Private and Parochial Schools (TAPPS), most recently in 2017.

This is one of those rare cases where it’s perfectly OK to covet thy neighbor’s stuff.

“It’s a blast,” Vanguard head coach Luke Pilant said. “Coach Helton runs a great program, and that makes it even better because you know they’re going to be ready to play, so you’d better be ready to play. When we got put in the same district last year, it just added that extra element. I love it. It’s great for six-man football in Waco, it’s great for the two schools. I don’t think there’s anything bad about it. I love it.”

Vanguard endured a rebuilding year in 2020, so the gap between the two programs felt as expansive as Lake Waco, which resides just a couple of Hail Mary passes away from the Vanguard campus. Live Oak won 48-0 at Paul Tyson Field during the district season, then the teams clashed again in the TAPPS state playoffs. The result was much the same, as Live Oak claimed a 54-8 triumph.

Obviously, any loss stings, especially in the playoffs. But for Vanguard, two mercy-rule defeats to their crosstown rivals acted as lighter fluid to the team’s offseason ignition.

“After last year, losing both games, it’s kind of been lighting a fire under us this summer,” Vikings quarterback Walker Nall said. “It’s giving us something to work toward. We already know the dates when we’re going to play them, so we’re always working toward that. But as far as the emotions toward it, on the football field I feel like it’s a lot more like a ‘we want to beat you’ type-attitude, but off the field I know some guys from there and they’re all really great guys. I like talking to them, like hanging out with them. On the field, though, it gets a little heated.”

So, can the Vikings close the gap? Can they bring the rivalry back to 2019, when they won a competitive season-opening game with the Falcons, 53-41?

“I hope so, we’ll see,” Vanguard’s Pilant said. “We’re not just going to play somebody that we’re going to roll over. We’d better come to play.’ I think they’ve taken that on, and we’ll see. Ask me after we play them.”

Live Oak running back Eli Herman has some friends and acquaintances on the Vanguard team. So, he’s cordial with the Vikings. But as far as the rivalry goes, it’s just that — a rivalry, so the burner on the stovetop never completely cools. Herman said that he thinks Vanguard ducked playing Live Oak in past years until a couple of seasons back, when some of Live Oak’s better players graduated.

“Now we’re kind of getting back up there, and we’ve got some better players, and they’re in our district and kind of forced to play us,” Herman said. “So we’ve got a chip on our shoulder for those years that they didn’t want to play us and then all of the sudden they wanted to. We’re just ready to take it to them.”

Nevertheless, that’s about as close as you’ll get to any type of trash talk with this crosstown clash. The pervading idea among the programs is this: Let’s go out and knock those guys down, help them back up, then knock them down again.

“I would say it’s a little bit of both (heated and congenial), but it’s more friendly,” Vanguard’s Marlow Welch said. “There’s a lot of respect for each other. It’s nothing dirty or anything.”

This year, the Vanguard-Live Oak battle is scheduled for Oct. 8 at Live Oak’s home field, flanked by Magnolia’s distinctive Silos. Ask either team, and it stands out as the most anticipated matchup on the schedule.

Both teams are blessed with an uncommon amount of upperclassman experience for the six-man level. Live Oak’s 23-man roster features 10 seniors, while Vanguard has seven seniors on its 14-player varsity roster. Given the parallels between the programs, it wouldn’t exactly be shocking to see the rivals stage a playoff rematch for the second straight season.

However, the similarities extend beyond any offensive scheme or roster makeup. They’re found in the halls of the schools themselves. These are private schools that pride themselves on the holistic educational experience they try to provide. They’re far more alike than they are different.

Come the second Friday in October, the Falcons and Vikings will try to grind the other into the turf. Their mutual respect won’t be sacked along with it, though.

“I think that it’s in a good place,” Live Oak’s Helton said. “The tone is set by the coaches and the administration. We respect those guys, think highly of them, so that always makes it a little more fun. Because I think we all have a good perspective of where football falls in the importance of life.

“I think that’s what is nice to see, when you see schools like ours who can compete well. Not just football, but everything. … I think that’s the fun part of schools like us and Vanguard, is putting a competitive group out there.”

One of the most successful basketball programs in Central Texas doesn’t roam the halls together. The players don’t hang out in the parking lot…

The official first day of spring is still two months away, but it’s never too early to start talking high school baseball and softball. Plenty of Centex teams dotted the preseason rankings from TXHighSchoolBaseball.com.

At halftime, University’s drum line brought the noise, thumping away with resounding beats. But this was a game marked more by the whistlers i…

The honors just continue to roll in for China Spring’s Major Bowden.

As COVID-19 case numbers have spiked across Central Texas, local athletic directors and coaches find themselves going to a second and sometime…

Live Oak’s Mason Peters (left) and Jonathan Buras will help spark the Falcons’ quest as they seek out another TAPPS six-man state title for the program.

“After last year, losing both games, it’s kind of been lighting a fire under us this summer,” Vanguard quarterback Walker Nall said after mercy-rule defeats against Live Oak.