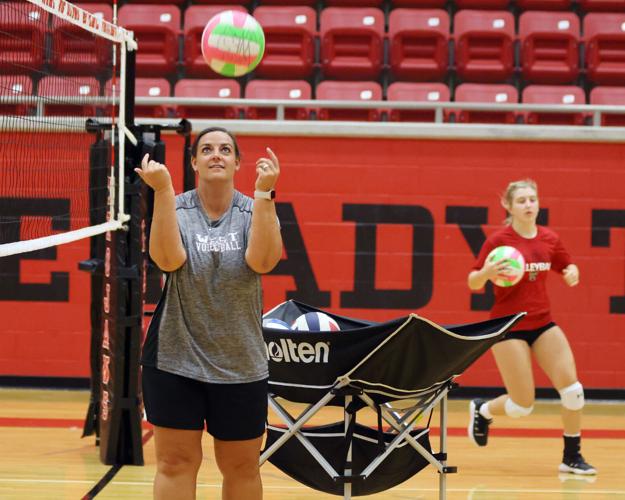 After many past years as a head coach, West’s Kari Sowders said shifting to an assistant role proved beneficial for her as she got a chance to learn from and pick the brain of a great coach in Sandy Dickerson. 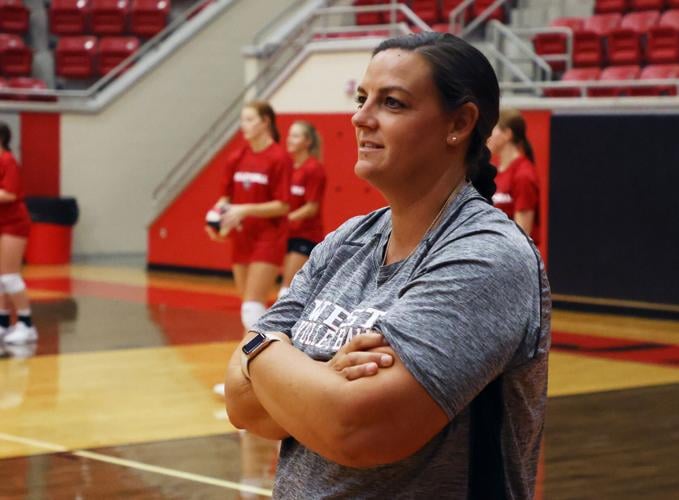 After spending the pat two years as an assistant in West, Kari Sowders will take over as the Lady Trojans’ head coach following the retirement of longtime winner Sandy Dickerson. 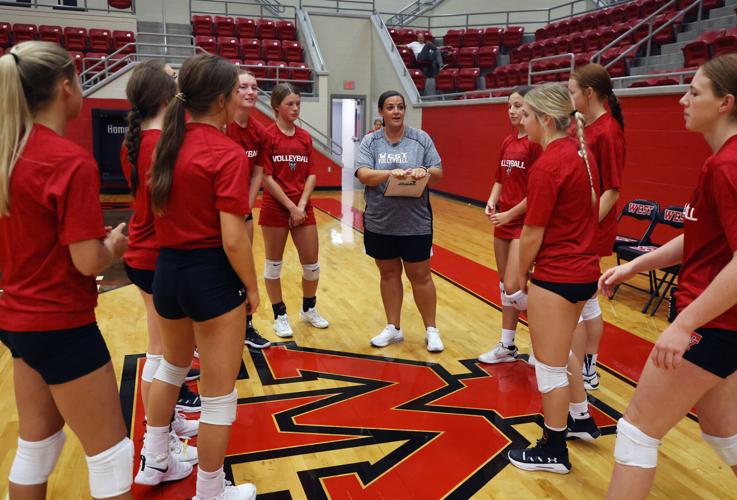 Coming off a 28-win season, West has high expectations again for the 2022 campaign. 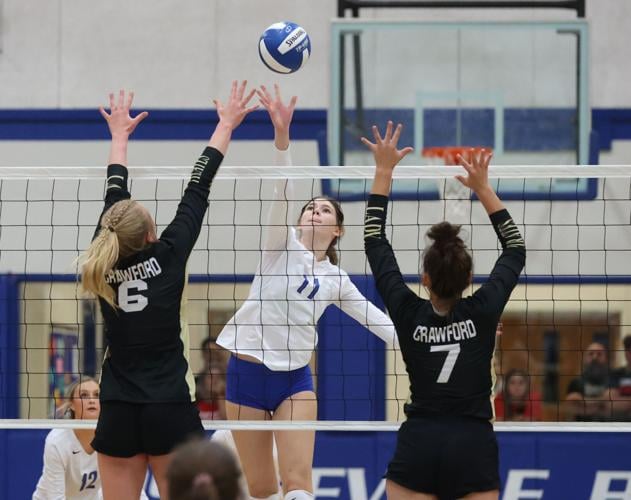 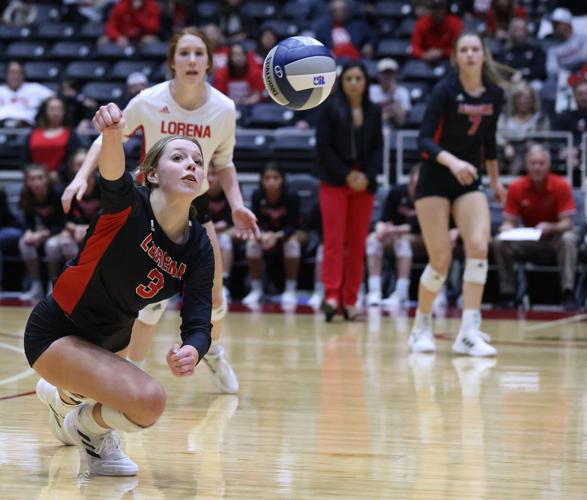 Senior Leigh Jespersen should be one of the leaders of a Lorena team coming off a state semifinalist appearance in 2021.

Several of Central Texas’ most consistently successful volleyball programs are breaking in new head coaches in 2022. That’s the case at Lorena with Andee Little, at Bosqueville with Kearstyn Woodard and at West with Kari Sowders. They’ll have their own way of doing things, their own style, and it certainly won’t be a Control-V exact duplication of the original.

But each says the standard remains the same. That is, work hard, win often.

“Something since I’ve been at Lorena, something they preach, is that the standard is the best,” Little said. “That’s just what Lorena is. We want to be the best, and obviously they’ve had great coaches in the past and a great program over the years, and that’s something that I just want to come to and add to. I want to add my own spin to it and keep it going with what we’ve got.”

Little grew up in Chilton and played a variety of sports there before attending the University of Texas. She started her coaching career in Riesel before moving on to her most recent stop of Lovelady. But she couldn’t be more thrilled to be headed back home to Central Texas.

“Lorena is a place I’ve always wanted to be. It’s kind of near home for me,” Little said. “Athletically, academically, the school, the community, it’s just a good place to be and it’s a place you want to be as a coach.”

What a time to arrive, too. Lorena bounces into the season with the velocity of a heavy-handed spike, considering the Lady Leopards are coming off the best season in program history in 2021. They went undefeated through District 17-3A and battled through the playoffs to reach the UIL state tournament for the first time before falling to Gunter in the 3A state semis.

Enter Little, who still carries big dreams for the Lady Leopards into the 2022 campaign.

“Those returners are having to take on some bigger roles or different roles,” Little said. “Obviously we’re learning to play without those really good seniors that were good leaders also. But I definitely see it, I feel like it’s in them. … We don’t care if it’s a 6A or a 2A (we’re playing) we want to do the best we can as Lorena Leopards.”

For Woodard, Bosqueville’s first-year leader, coaching is something of a family business. Her father David is the athletic director and head football coach at West. Her grandfather was a coach, and both of her dad’s brothers are coaches.

“So, I definitely feel like I’ve had some very strong coaching role models in my life. It’s in my blood,” she said, chuckling.

Kearstyn grew up in nearby West and was a standout volleyball player for the Lady Trojans who graduated in 2017, so she was already plenty familiar with Bosqueville’s program. But she knew that there would be a transition period, some inherent get-to-know-you formalities to work through. She said she spent this summer holding open gyms for the returning Lady Bulldogs, in part so she could meet the players and start learning their tendencies, so “we could build upon that,” she said.

The foundation appears sturdy enough for Bosqueville to start constructing a tower of excellence over at Rock Creek Road that could equal the Alico Building in height when it’s all said and done. The Lady Bulldogs are coming off a 36-5 season in which they reached as high as No. 2 in the Texas Girls Coaches Association state rankings before falling to Lindsay in the area round of the Class 2A playoffs.

Several pillars from that team are back, including senior libero Annabelle Kuehl and a pair of towering sophomore smackers in 6-4 Logan Dyer and 6-0 Emma Patterson.

“I’m very excited. We have a lot of good returners coming back,” Woodard said. “We can flat play, I feel like. I’m excited for this season, definitely.”

Woodard said that she wants Bosqueville to be known for being sharp in the basics, for doing the little things right. If they do that, they’ll win plenty.

“I sat down and talked with the girls to learn their expectations and let them know my expectations, just to kind of see where we are and where we want to go in setting goals,” Woodard said. “We want to make sure we keep that high standard for the Bosqueville volleyball program.”

Up at West, the perennial playoff power Lady Trojans bade farewell to their longtime coach Sandy Dickerson, as she opted to retire following the 2021-22 school year. Her replacement is a familiar presence on Central Texas volleyball sidelines, though. Sowders not only spent the past two seasons at West as an assistant under Dickerson, but she formerly led a successful Lorena program as head coach from 2009-19 and won Super Centex Coach of the Year honors in 2009. She also coached at Hillsboro and Connally prior to moving to Lorena.

Sowders called these past two years at West “a blessing,” in part because it allowed her to learn from a Centex legend in Dickerson.

“I think it helped me learn how to stay patient and work through things,” Sowders said. “She’d been doing this for so long that she probably had more patience with sometimes just letting things playing out. She had her ways of doing things and I have mine, but we worked really well together. I think we though a lot alike. It was a great relationship — we agreed on a lot of things.”

Track season is a long way off, but it’s a bit of a passing of the baton in West. Sowders wants to carry on what Dickerson built, and just try to bring it on home to the finish line.

West went 28-14 last season and advanced to the Class 3A area playoffs before dropping a five-set squabble with Lexington. Sowders is enthusiastic about the returning veterans who will lead the 2022 Lady Trojans’ hopes. Maddie Honea was the District 17-3A Blocker of the Year last season. Marley Gerik and Laney Kucera have established themselves as steady passers, and Sowders said Riley Kaluza is ready to step into a bigger role as West’s top hitter. Running the offense will be sophomore setter Addie Sykora, who Sowders said was amazing last season but is “so much better one year later.”

Under Dickerson, West crafted a history of deep playoff runs. Though there’s a new coach in charge, the objective remains unchanged.

“The standard is not going to change,” Sowders said. “The kids are bought-in already. They’re really willing to work, and we’ve only had a few practices. But they’re ready to go, working hard. We want to compete for a district championship and maybe make a run at a regional tournament, get back there.”

After many past years as a head coach, West’s Kari Sowders said shifting to an assistant role proved beneficial for her as she got a chance to learn from and pick the brain of a great coach in Sandy Dickerson.

After spending the pat two years as an assistant in West, Kari Sowders will take over as the Lady Trojans’ head coach following the retirement of longtime winner Sandy Dickerson.

Coming off a 28-win season, West has high expectations again for the 2022 campaign.

Senior Leigh Jespersen should be one of the leaders of a Lorena team coming off a state semifinalist appearance in 2021.