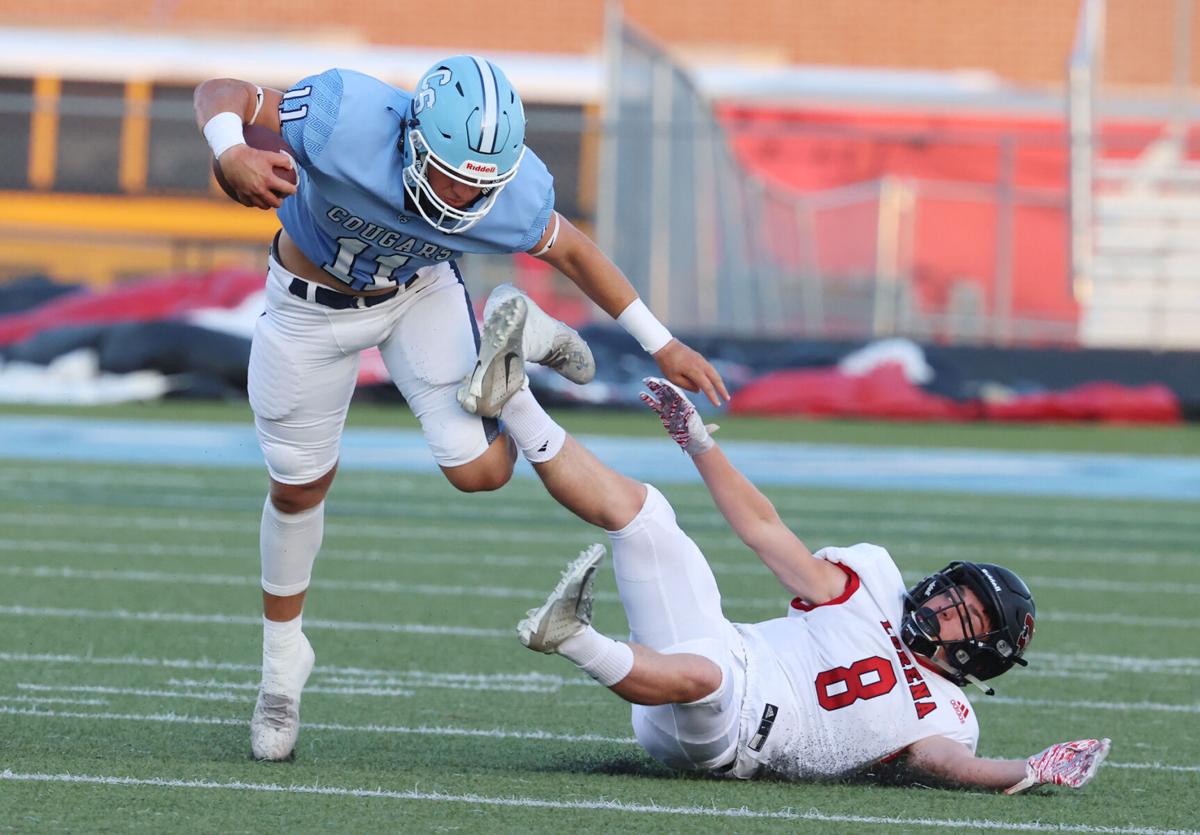 China Spring’s Brayden Faulkner shakes off Lorena’s Colton Dale during the first half of their nondistrict game back in September. Both the Cougars and Leopards are still alive in the playoffs in their respective divisions. 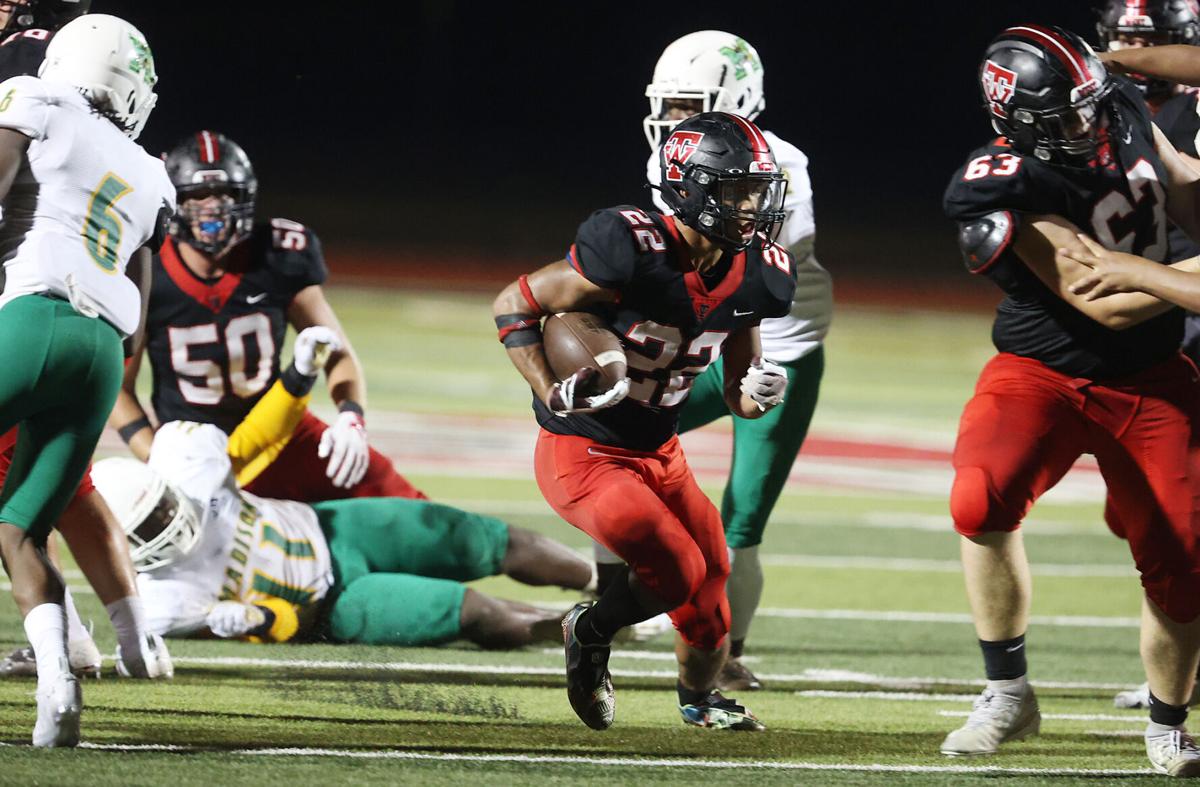 TJ McCutcheon (22) and the West Trojans face Malakoff in one of many top-10 matchups this week in the third round of the playoffs.

If you know then you know. And you probably also know this: if your team made it to the third round of the playoffs, that’s one louder than last week, isn’t it?

Yes, ladies and gentlemen, we have 11 win-or-go-home high school football games for Central Texas fans to enjoy this week. All of them come at you on Friday. The schedule begins with a top-10 showdown between Lorena and Columbus at 1:30 on Friday afternoon at Texas State’s Bobcat Stadium and ends with a couple of 7:30 kickoffs Friday night — Abbott vs. Coolidge in Mexia and Riesel vs. Franklin in Belton.

If you’re reading this online, there’s a chance it’s Thursday evening and you can chart your course for Friday. If you picked up the print edition, hopefully there’s still time to gas up the car and head for a football stadium.

To help you out, I’m going to rank these 11 games in order with the time and place and a little extra juice on each one. But here’s the catch, I’m not going to tell you my ranking system. Maybe you’ll figure it out and, if you think you’ve done so, you can email me at chad.conine@wacotrib.com and I’ll tell you if you got it right.

Marlin vs. Tolar, 7 p.m. in Alvarado: This might be the time to start buying Marlin stock. The Bulldogs have won seven of their last eight games with the only loss coming by two points at Italy, which is also still alive in the playoffs. But Tolar is equally hot. This is probably the best matchup of teams that didn’t win their district in the state this week.

No. 9 La Vega vs. No. 4 Melissa, 7 p.m. at McKinney ISD Stadium: Usually there’s something — a score, an offensive or defensive strength or weakness, a key stat — to base leaning one way or another on any given game. Can’t really find one here. Consider these common opponents and results: La Vega 14, Kaufman 10; La Vega 40, Midlothian Heritage 28; Melissa 17, Kaufman 2; Melissa 50, Midlothian Heritage 41.

No. 5 China Spring vs. No. 1 Carthage, 5 p.m. at Prosper ISD Children’s Health Stadium: When I think of this game, I can’t help but think of 2Pac’s All Eyez on Me. There are a few tantalizing matchups around the state this week — the above La Vega vs. Melissa; Stephenville vs. Argyle, etc. — but this one might be the premiere contest. Just to be sure, I checked with a media source that covers the entire state and she pointed to the Cougars vs. the Bulldogs as well. Carthage, in case anyone has forgotten, has won back-to-back state titles. But China Spring has a legitimate chance to survive and advance.

No. 5 Lorena vs. No. 6 Columbus, 1:30 p.m. at Texas State’s Bobcat Stadium: Man, I wish I had a helicopter because I’d love to cover this game at 1:30 and still be able to get to Prosper by 5. The Leopards opened the season with games against Franklin and China Spring and have since won 10 in a row. Those two early games might benefit them a ton in this ranked showdown.

No. 4 West vs. No. 10 Malakoff, 2 p.m. at Mesquite Hanby Stadium: If they made me commissioner of high school football with the power to schedule, this fantastic game would be played at noon on Saturday in Mexia. Like just about every game on this list so far, I’d love to be there. My gut is that Wyatt Wolf and/or TJ McCutcheon is going to make a play or two that help get the Trojans to the regional final.

No. 1 Live Oak vs. No. 3 Lucas Christian, 6 p.m. in Keene: Pound-for-pound the six-man private school Live Oak Falcons have possibly had the best season of any Central Texas team (Mart Panther fans will hate this sentence). This matchup against Lucas Christian is a big obstacle in the Falcons’ path to a state championship.

No 4. Crawford vs. Italy, 2 p.m. in Alvarado: Going into the third round, those of us who evaluate high school football on a weekly basis look at this as a state championship contender (Crawford) versus a good football team that has made a valiant effort to win district and make it to the third round of the playoffs (Italy). I doubt the Italians see it that way, though. Italy has the weapons to challenge Crawford. However, I don’t expect the Pirates to overlook the Gladiators.

Chilton vs. Bremond, 6 p.m. at Waco ISD Stadium: The four teams remaining in Class 2A Division II Region 3 are the four playoff qualifiers from 10-2A DII. That’s the only district in the state that pulled off that achievement. But now that we’ve seen these two games before, we kind of know what to expect. Chilton defeated Bremond, 41-0, the first time around. That would make it quite the upset if the Tigers figured out enough fixes to turn the tables on the Pirates.

Riesel vs. No. 1 Franklin, 7:30 p.m. at Belton Tiger Stadium: Applause to Riesel for making a run at the end of the season to win four in a row and get here. But Franklin won the 13-3A DII meeting between these two, 75-13. That’s a lot for Riesel to try to overcome.

No. 1 Mart vs. Wortham, 2 p.m. in Mexia: Mart is on a mission to win its fourth state championship in five seasons. With all due respect to Wortham for their playoff run, the Panthers’ quest does not include losing to a team they beat, 49-0, just three weeks ago.

China Spring’s Brayden Faulkner shakes off Lorena’s Colton Dale during the first half of their nondistrict game back in September. Both the Cougars and Leopards are still alive in the playoffs in their respective divisions.

TJ McCutcheon (22) and the West Trojans face Malakoff in one of many top-10 matchups this week in the third round of the playoffs.