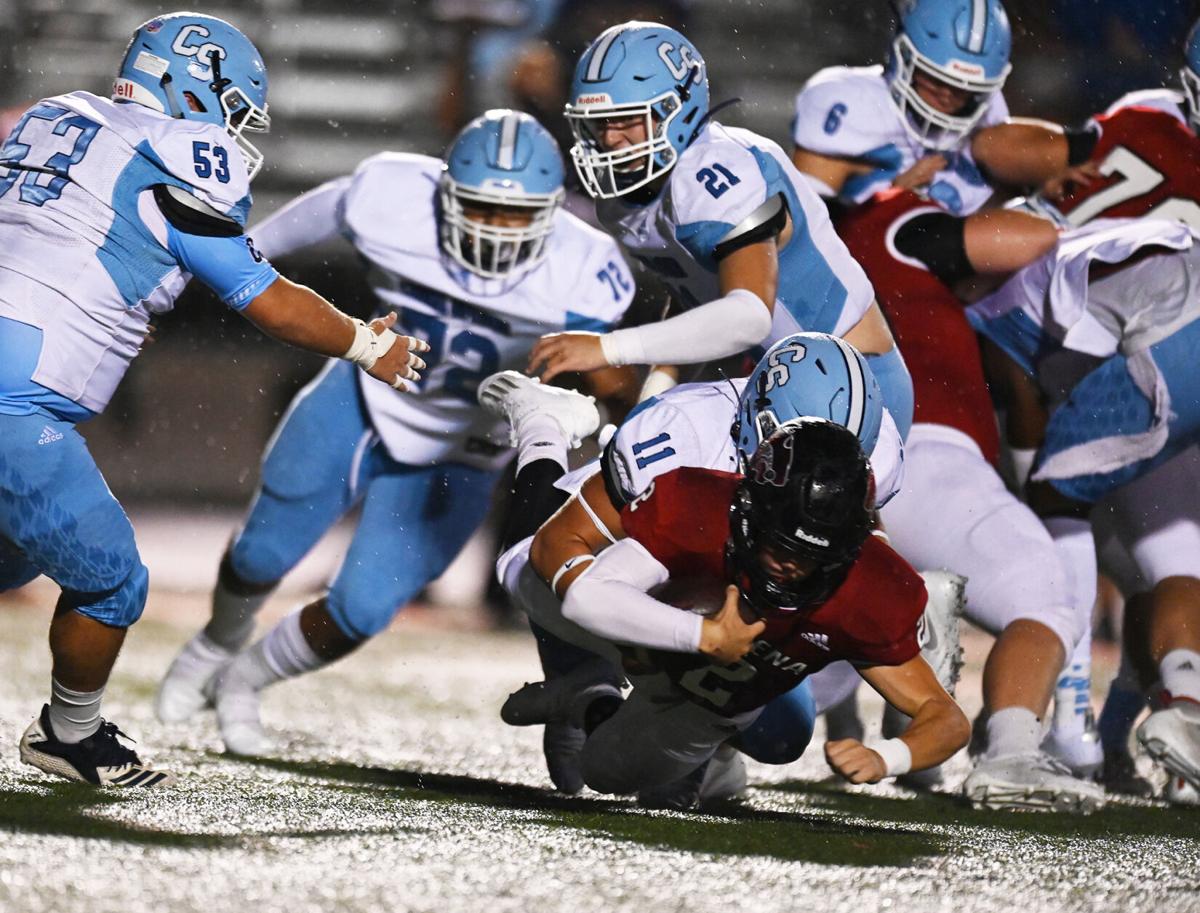 Lorena’s Ben Smedshammer is tackled by China Spring’s Brayden Faulkner in the first half of the Cougars’ win Friday. 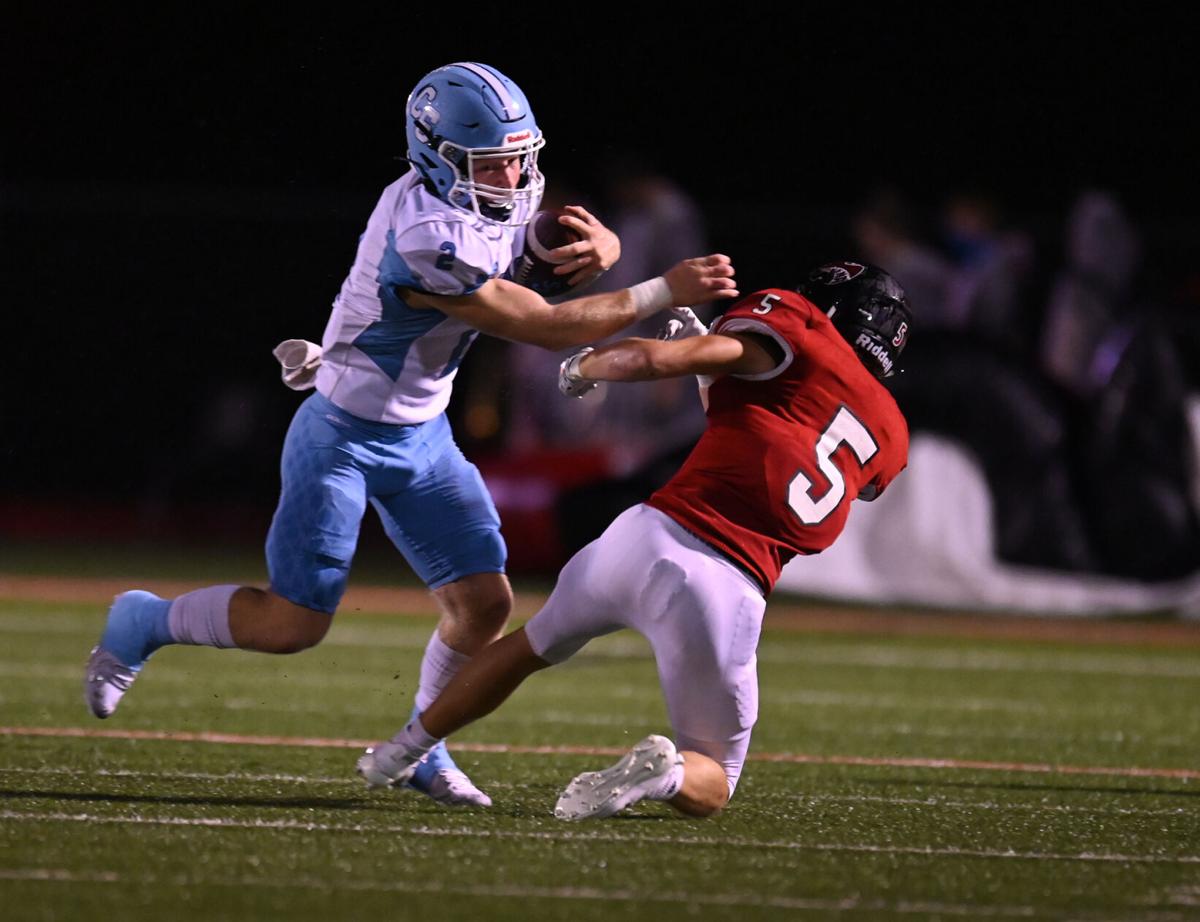 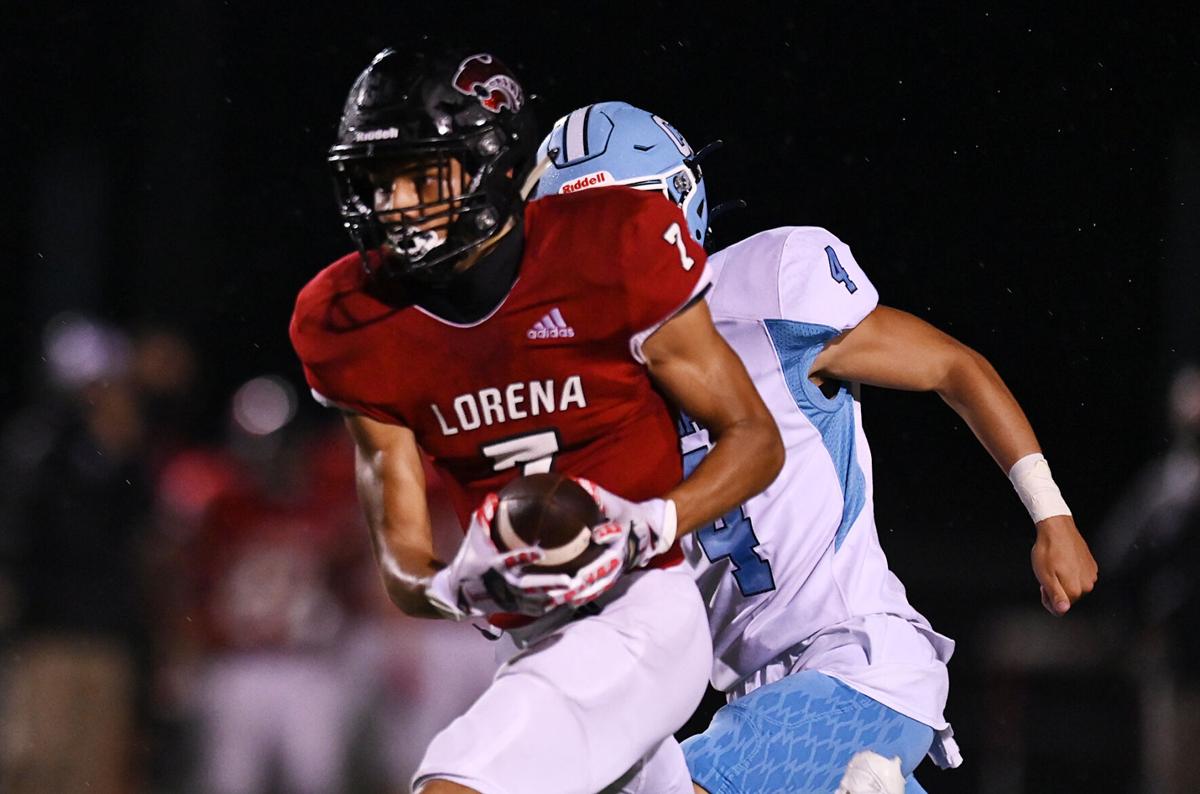 The Cougars swarmed, forced three key turnovers, and made momentum-changing stops all night.

China Spring didn’t give Lorena much room to maneuver to pull off a 42-13 win Friday night.

The game was delayed 70 minutes due to lightning, but once it began China Spring’s defense dominated.

Blake Barrett recovered a fumble and Tre Hafford had an interception that helped the Cougars open up a 14-0 first-half lead. They went on to score 28 second-half points to improve to 2-0 after opening with a 74-35 win over Benbrook in last week’s season opener.

The Cougars held the Leopards (1-1) to 247 yards total offense and didn’t allow a score until late in the third quarter. Lorena opened the season with an impressive 21-20 win over No. 8 Franklin last weekend.

China Spring’s offense was powered by Emmanuel Abdallah with 137 yards rushing and three touchdowns while quarterback Major Bowden rushed for 93 yards and two scores and passed for 76 yards.

In the first quarter, Barrett recovered Lorena quarterback Ben Smedshammer’s fumble after a nine-yard run at the Leopards’ 38.

The Cougars capitalized when Bowden found an opening down the right sideline for a 23-yard touchdown to take a 7-0 lead with 4:36 left in the first quarter.

Early in the second quarter, China Spring defensive lineman Greg Salazar put the Leopards in a hole when he sacked Smedshammer for a seven-yard loss to the 8. Hafford intercepted Smedshammer’s pass at Lorena’s 42 to give China Spring ideal field position again.

Abdallah delivered the big play as he exploded up the middle and broke a tackle near the 20 before finishing off a 36-yard touchdown run to push China Spring’s lead to 14-0 with 8:10 left in the second quarter.

China Spring’s offense got incredible field position again to open the third quarter when Lorena punter Jadon Porter was nailed for a six-yard loss at the 7 after fielding a low snap.

Bowden blew up the middle for a seven-yard touchdown to stretch the Cougars’ lead to 21-0 with 9:30 left in the third quarter.

Following a Lorena punt, China Spring got the ball at its own 44. Bowden went deep to Jordan Nevarez for 45 yards to set up Abdallah’s nine-yard touchdown run to push the lead to 28-0 with 6:43 left in the third quarter.

On Lorena’s next possession, Dawson Exline recovered a fumble at the Leopards’ 26 to set up Abdallah’s 10-yard touchdown run to extend China Spring’s lead to 35-0 with 4:57 left in the third quarter.

After finding little room all night, Cayden Madkins broke loose down the right sideline for a 79-yard touchdown run to put Lorena on the board for the first time with 4:34 left in the third quarter.

China Spring quickly responded as Sergio Watkins took a pitch from Brayden Faulkner and ran for a nine-yard touchdown for a 42-6 lead with 11:25 left in the game.

When the UIL announced district realignment, China Spring and Gatesville dropped from Class 5-4A Division I to 9-4A Division II.

Lorena’s Ben Smedshammer is tackled by China Spring’s Brayden Faulkner in the first half of the Cougars’ win Friday. 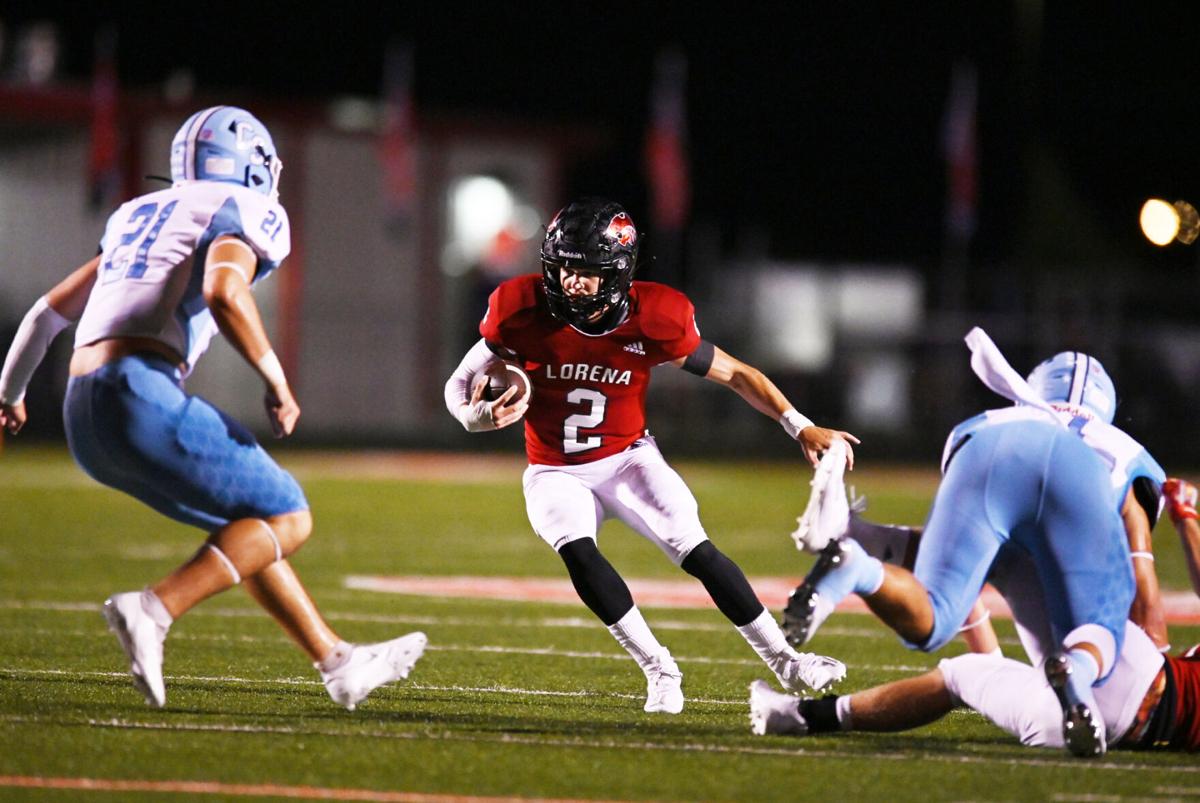 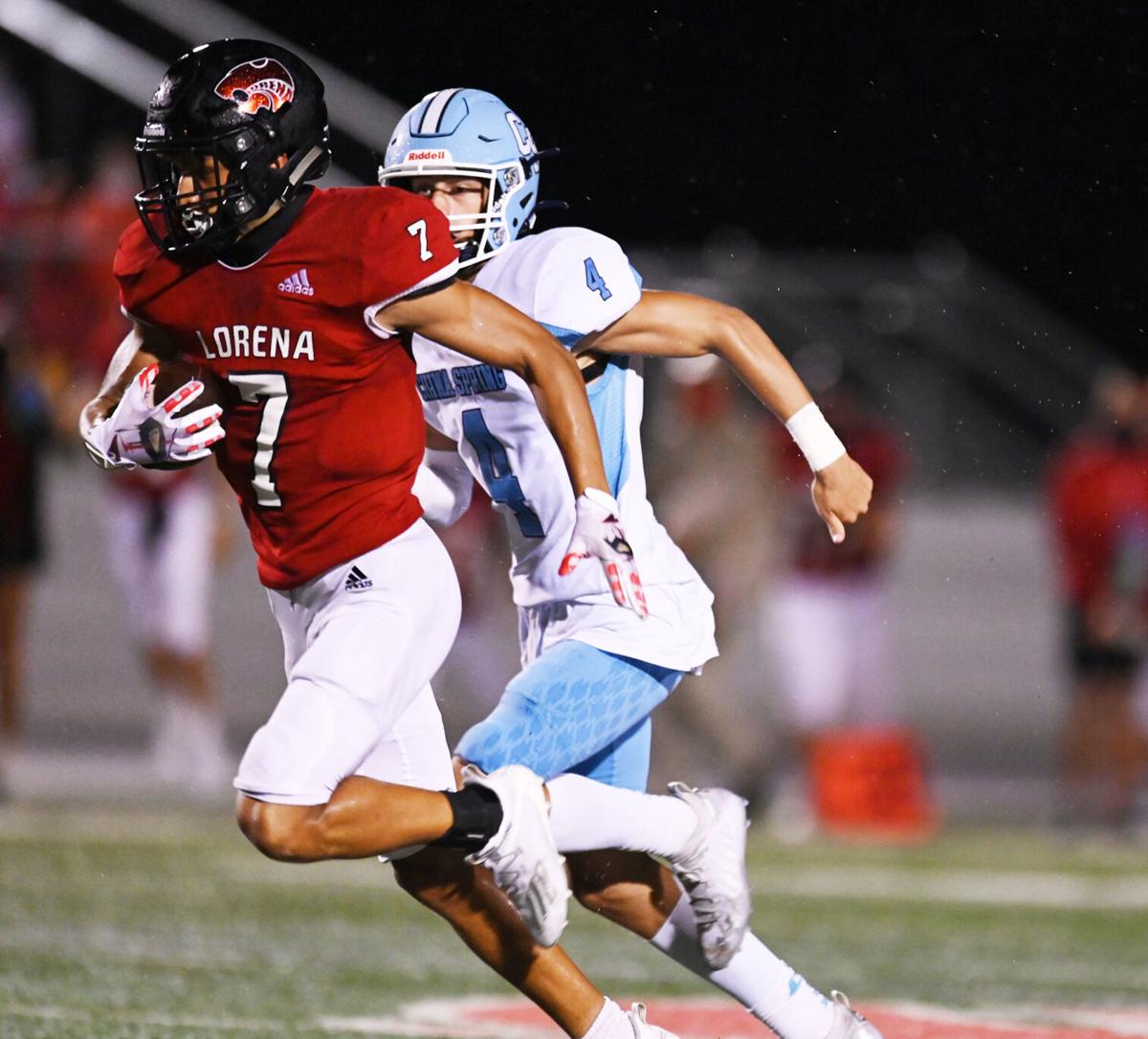 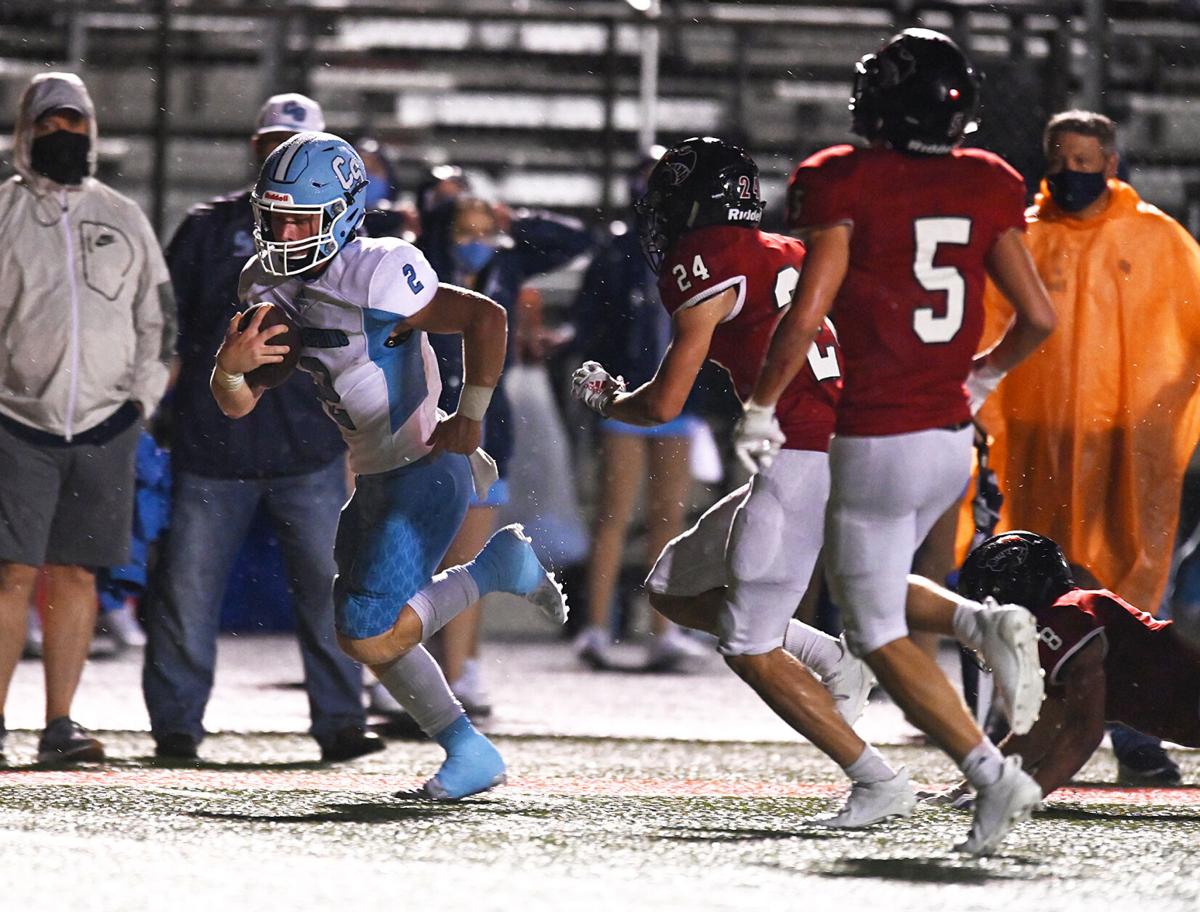