ARLINGTON — Once the China Spring Cougars swung momentum to their side, they never let it go.

In an instant at the end of the first half, the Cougars went from potentially falling behind the Gilmer Buckeyes to celebrating a lead they wouldn’t relinquish.

China Spring shut out Gilmer in the second half on the way to a 31-7 victory on Friday afternoon in the Class 4A Division II state championship game at AT&T Stadium. In doing so, the Cougars finished off a 16-0 season and claimed the school’s first football state title since 1978.

ARLINGTON — Midway through the first half of the state championship game, China Spring quarterback Major Bowden ran to his left for a few yard…

China Spring coach Brian Bell hugged his father, former China Spring head football coach and athletic director Mark Bell, when it was all said and done. Brian Bell was a backup quarterback when his father led the Cougars to the state title game in 2007, a contest China Spring lost to Celina, 21-14.

This playoff season, China Spring stepped to center stage and delivered a performance that grabbed the attention of football fans all over the state. The Cougars knocked off two-time defending state champion Carthage, 27-17, on the Friday after Thanksgiving. Since then, China Spring rolled through three more state-ranked opponents without ever flinching.

“A lot of people told us that it was kind of over and we had the thing won after that third-round game against Carthage,” Bell said. “We’ve got a mature football team, like I said. We’ve got a mindset that we started since day one and that’s 1-0 every week. They believe in it.”

The China Spring special teams unit made a huge play to end the first half, changing the complexion of the contest.

Gilmer had moved inside the Cougars’ 10 as the final seconds of the second quarter were ticking away.

Buckeyes kicker Jose Hernandez lined up for a 22-yard field goal, but a high snap gave China Spring defensive back Jacob Mott just enough time to get into the backfield and block the kick.

The batted ball bounced high off the turf and Cougars defensive back Gabe Watkins caught it on the run. Watkins left the Gilmer players behind him on an 86-yard return for a touchdown.

“I’ve never been a part of (a momentum swing) like that before,” Bell said. “That was pretty neat. That was special. We’ll remember that one forever.”

Watkins’ score sent China Spring to halftime leading 14-7 and riding the thrill of the play.

“We were all kind of hyped up when we came running in (to halftime),” China Spring linebacker Brayden Faulkner said. “It was a good momentum booster, then we also had to jump back in and not get complacent and kind of focus on the next half.”

Up to that point, the Buckeyes and Cougars had traded punches and long drives throughout the first half.

Gilmer running back Ashton Haynes scored on a six-yard run to put the Buckeyes in front midway through the second quarter.

China Spring responded on its next possession by marching 61 yards in 10 plays for an equalizing touchdown.

Cougars quarterback Major Bowden converted a third-and-eight by getting into the Gilmer secondary on a keeper, sidestepping a Buckeye tackler and running to the 9 before the Buckeyes brought him down.

Three plays later, the Cougar QB burrowed into the end zone for a three-yard score that evened the game at 7 with 2:03 left in the first half.

“We were battling like crazy there in the first half,” Gilmer coach Alan Metzel said. “Right there at the half where we’re expecting to have this big boost of emotion and feel good and it flips on us. We struggled to recover from that. Couldn’t get any offensive momentum.”

Bowden, who earned Offensive Player of the Game, rushed for 73 yards in the first half. After the break, he went off for 118 more.

Early in the fourth quarter, he shot through a hole in the middle of the offensive line and ran 14 yards for a touchdown that put China Spring in front, 24-7.

By then, the Cougars had slowed down a dynamic Buckeye offense by winning the line of scrimmage on key plays.

Gilmer faced fourth-and-one from the China Spring 48 late in the third quarter. The Buckeyes handed the ball to Haynes, but he was met in the backfield by Mason Kirk and Greg Salazar. The two Cougars dropped Haynes for a two-yard loss.

China Spring defensive back Tre Hafford made 7.5 tackles with two tackles for losses and a pass breakup to earn Defensive Player of the Game. His swatted pass stopped another Gilmer fourth-down play in the fourth quarter.

With momentum firmly on its side China Spring put the game away with a 42-yard touchdown drive. Bowden, of course, punched in the touchdown on a two-yard run, his third of the game.

“They had a good strategy and they had the young man that could pull it off,” Metzel said.

The Heart of Texas Fellowship of Christian Athletes announced its coaching staffs for this summer’s Super Centex Victory Bowl games on Sunday. 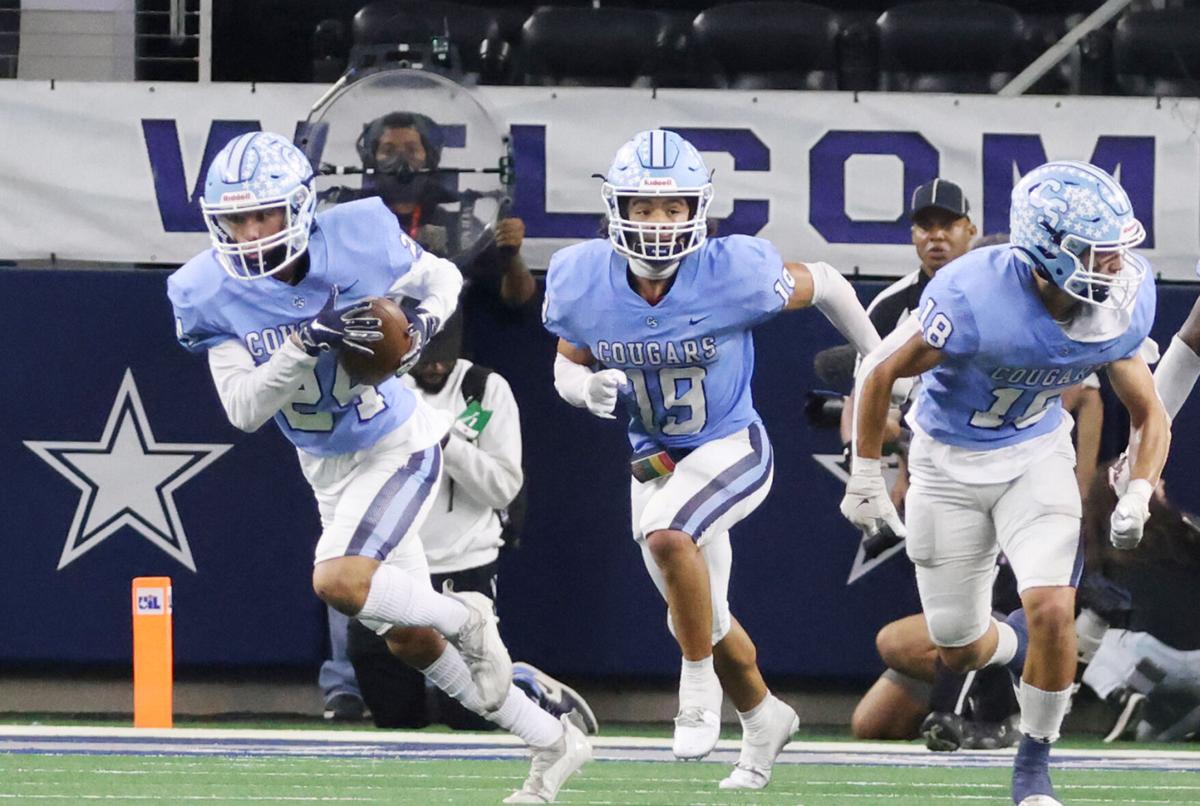 China Spring’s Gabe Watkins (left) scoops up a blocked field goal and takes off en route to a momentum-swinging 85-yard touchdown at the end of the first half of the Cougars’ 31-7 state final victory. 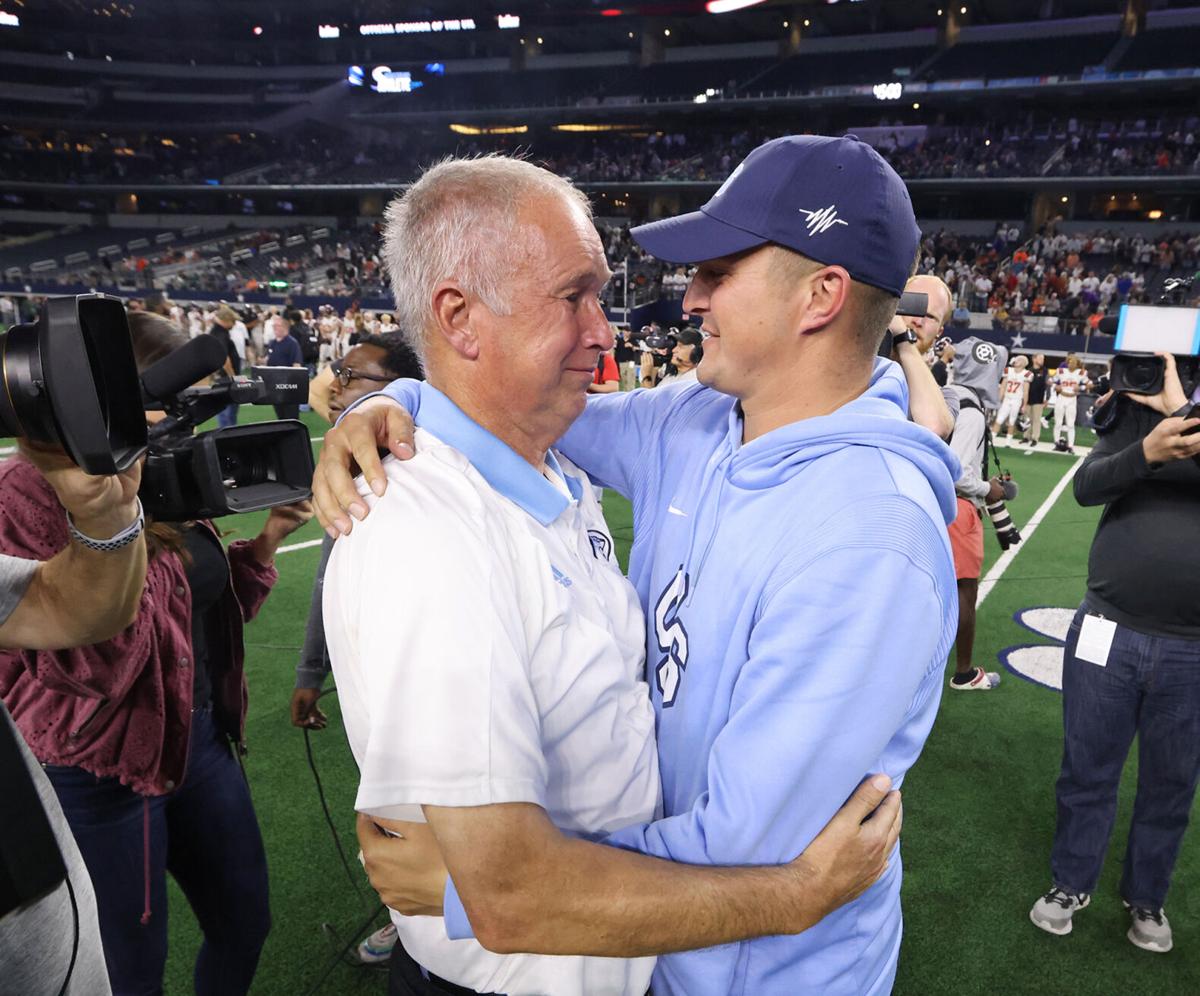 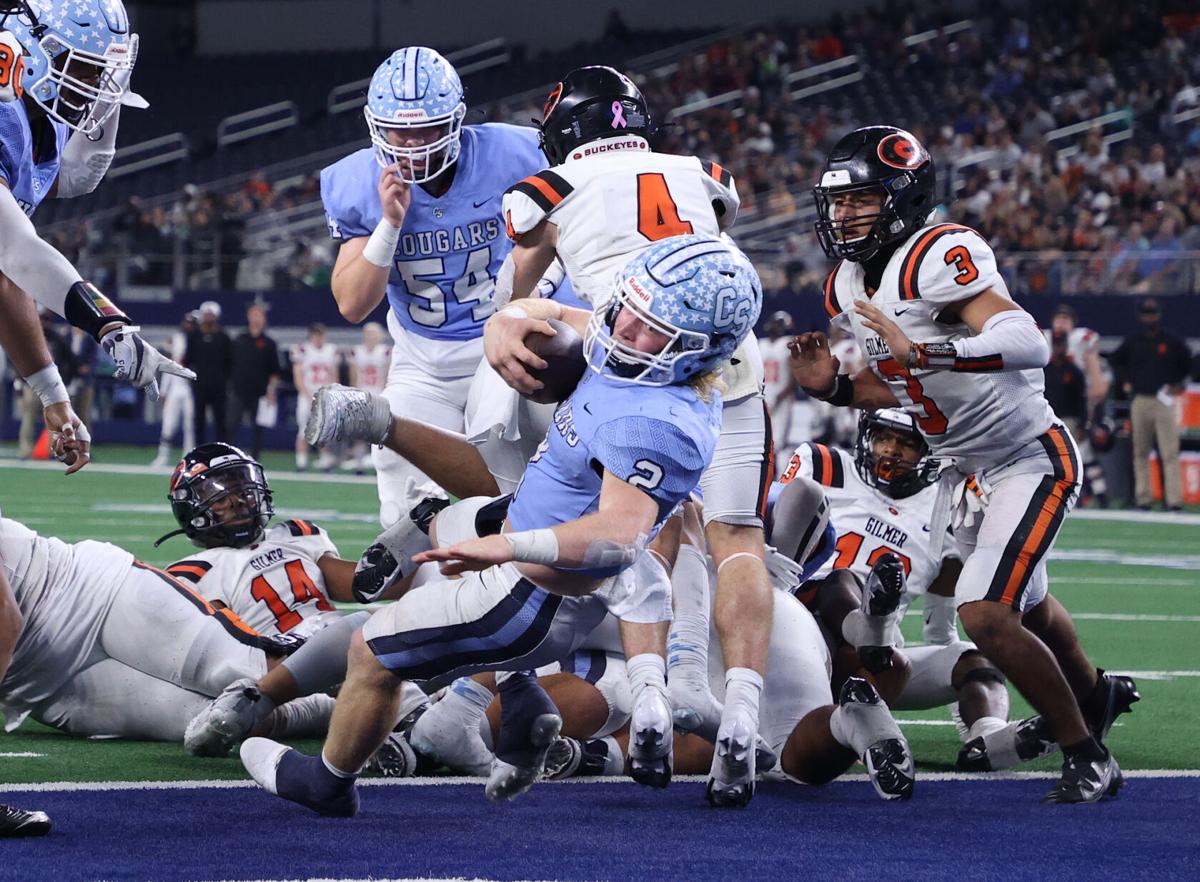 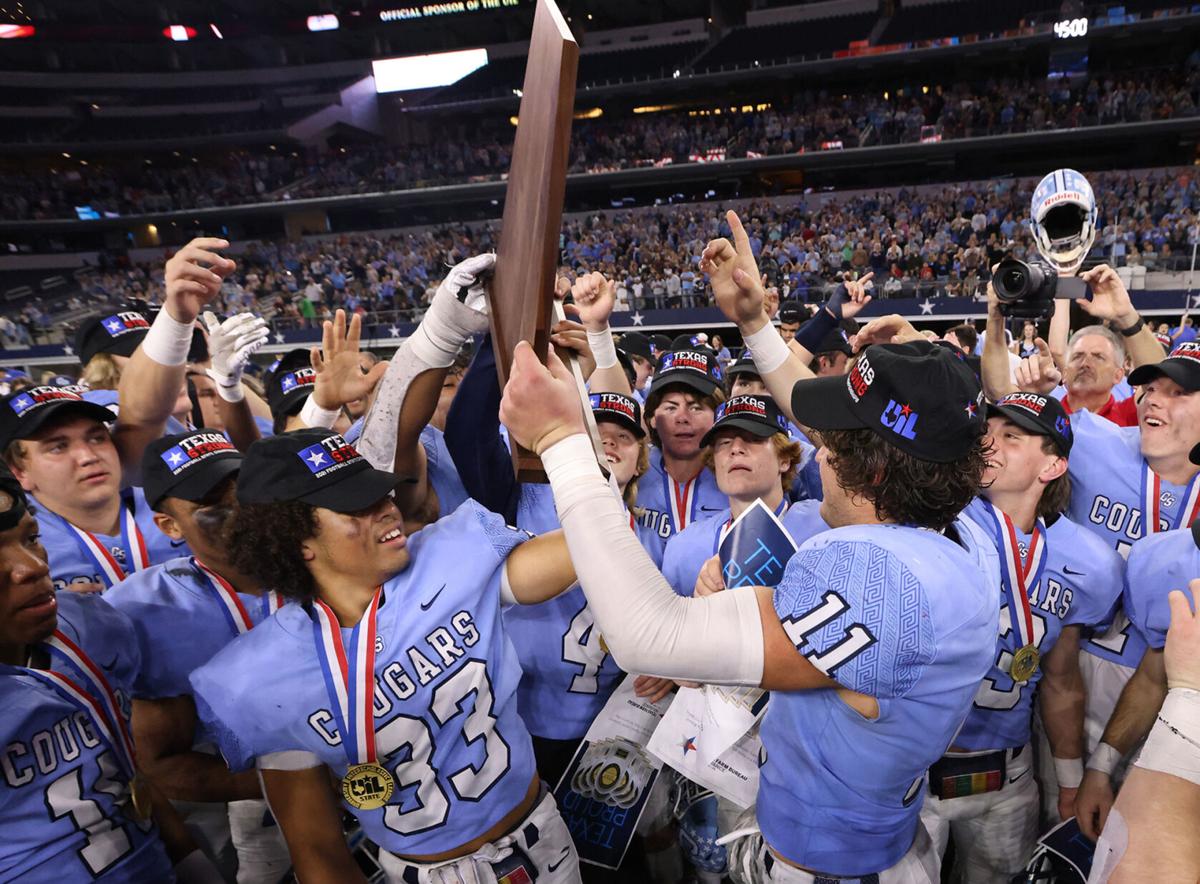 China Spring’s Brayden Faulkner (11) and Jaeden Davis (33) hold up the trophy after defeating Gilmer for the state title. 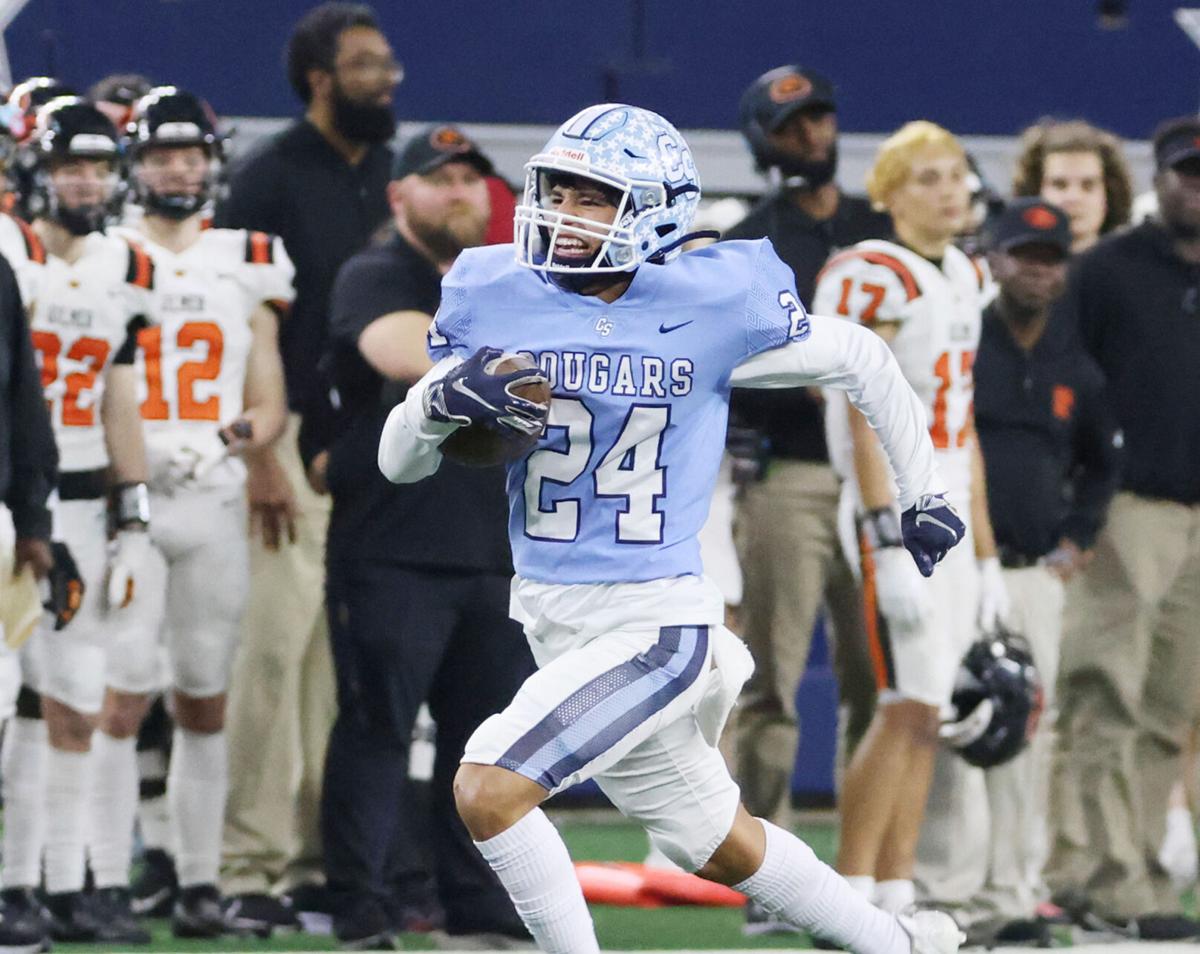 China Spring's Gabe Watkins returns a blocked field goal of a Gilmer attempt and returns it for a touchdown to close the first half. 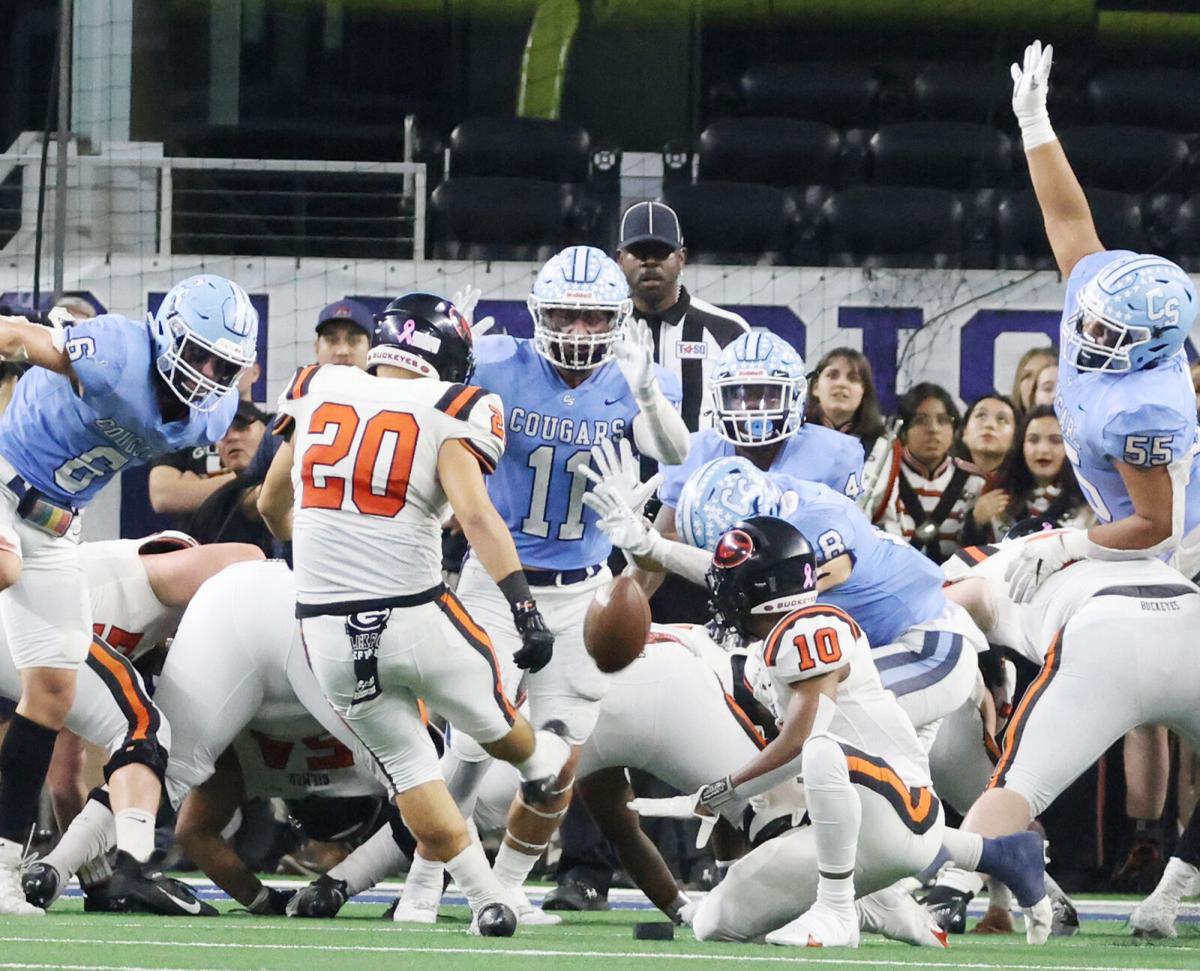 China Spring's Jacob Mott blocks the attempted field goal by Gilmer's Jose Hernandez that was picked off by China Spring's Gabe Watkins and returned for a touchdown as the play of the game. 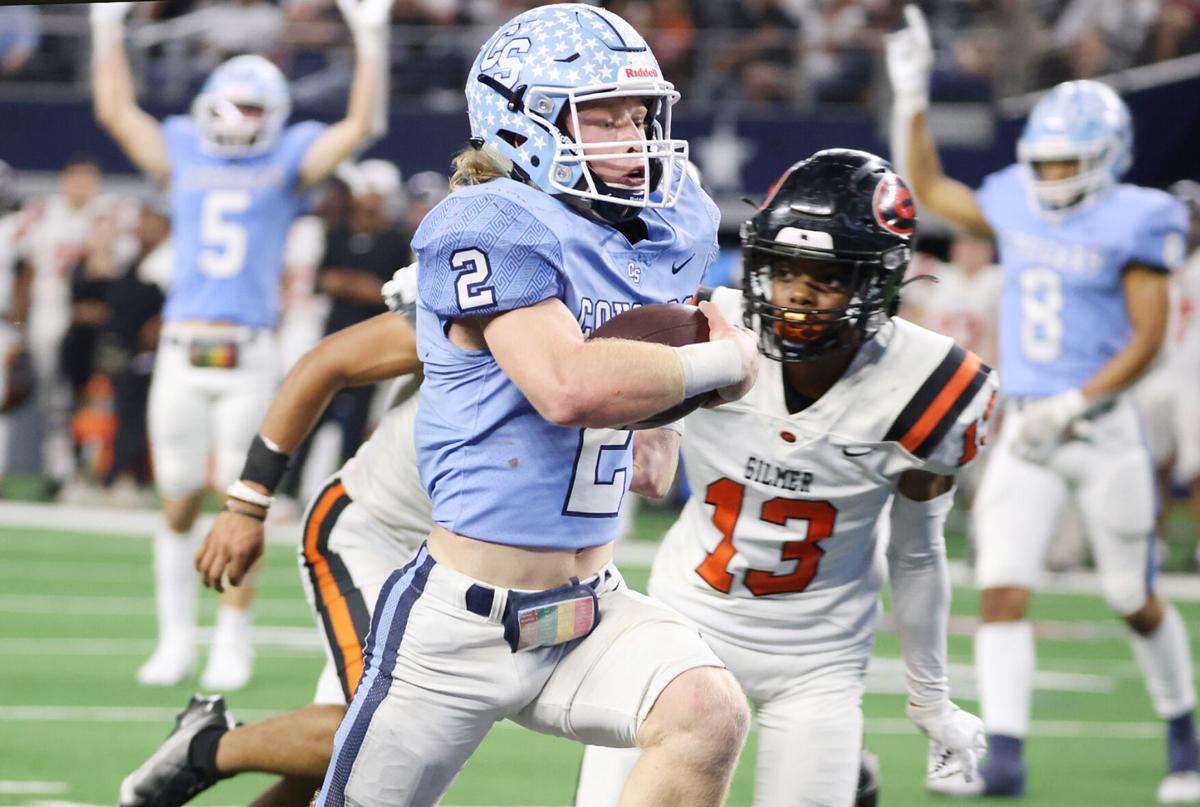 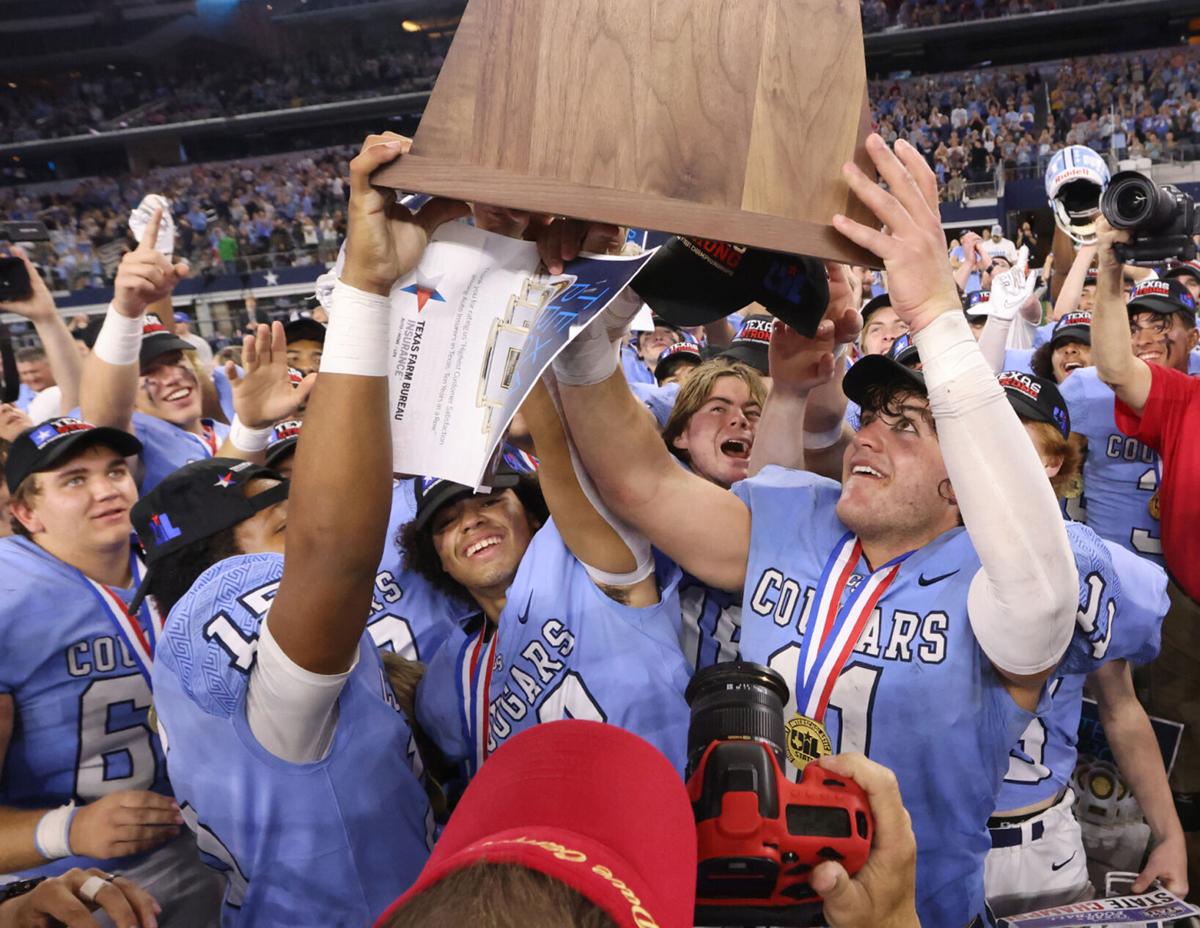 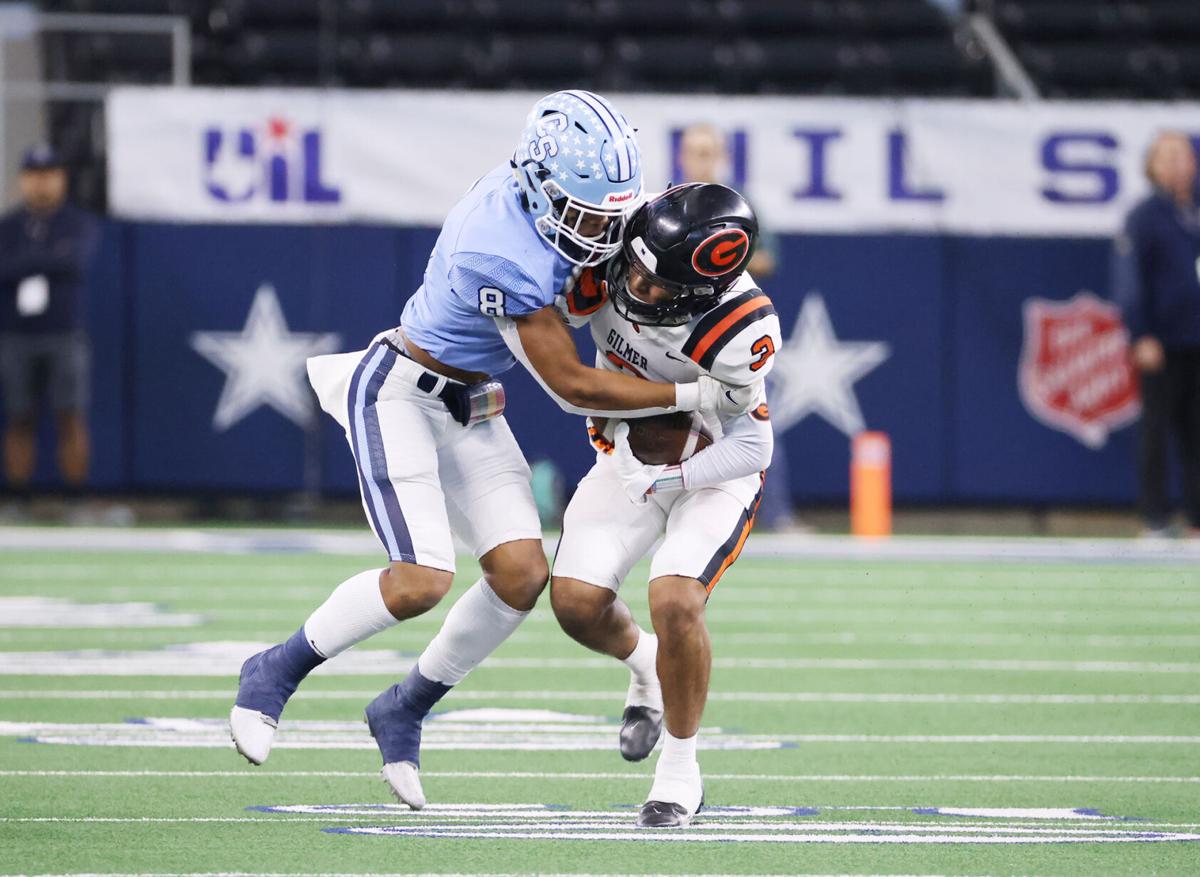 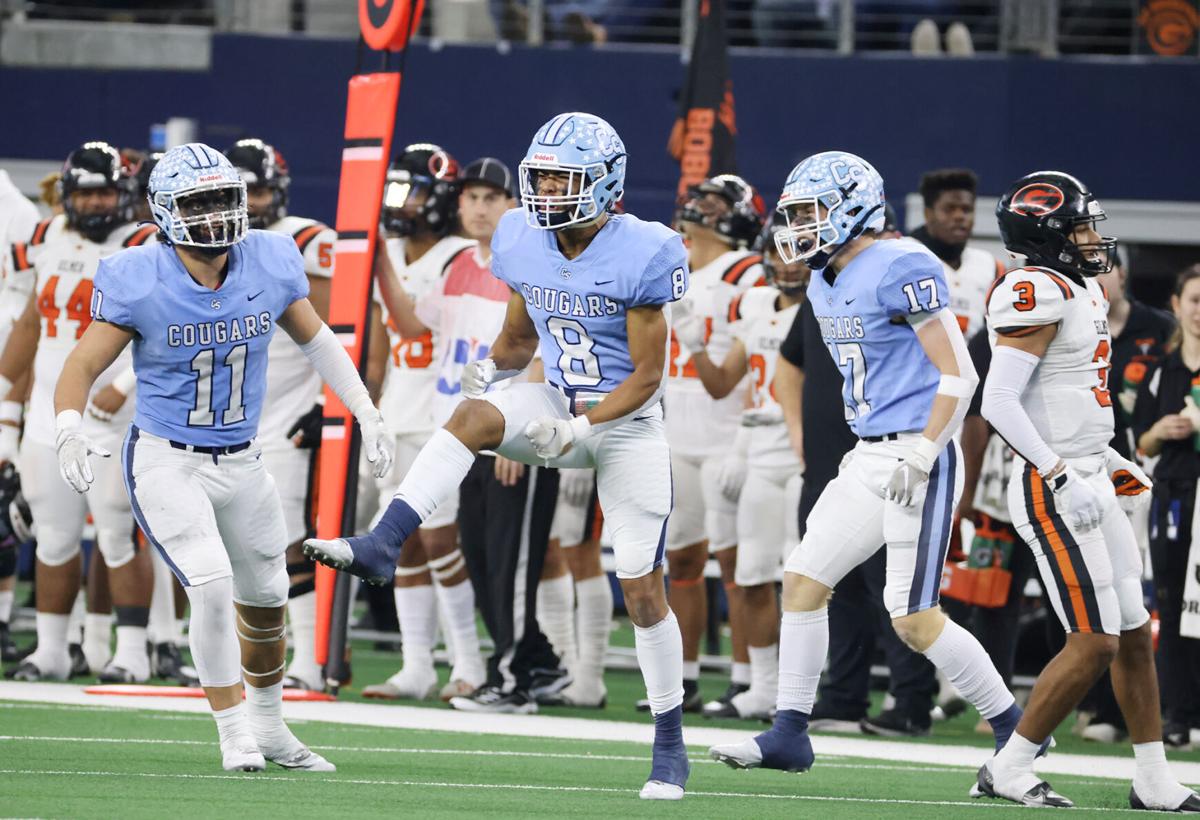 Defensive MVP China Spring's Tre Hafford, center, reacts to a play against Gilmer in the first half.