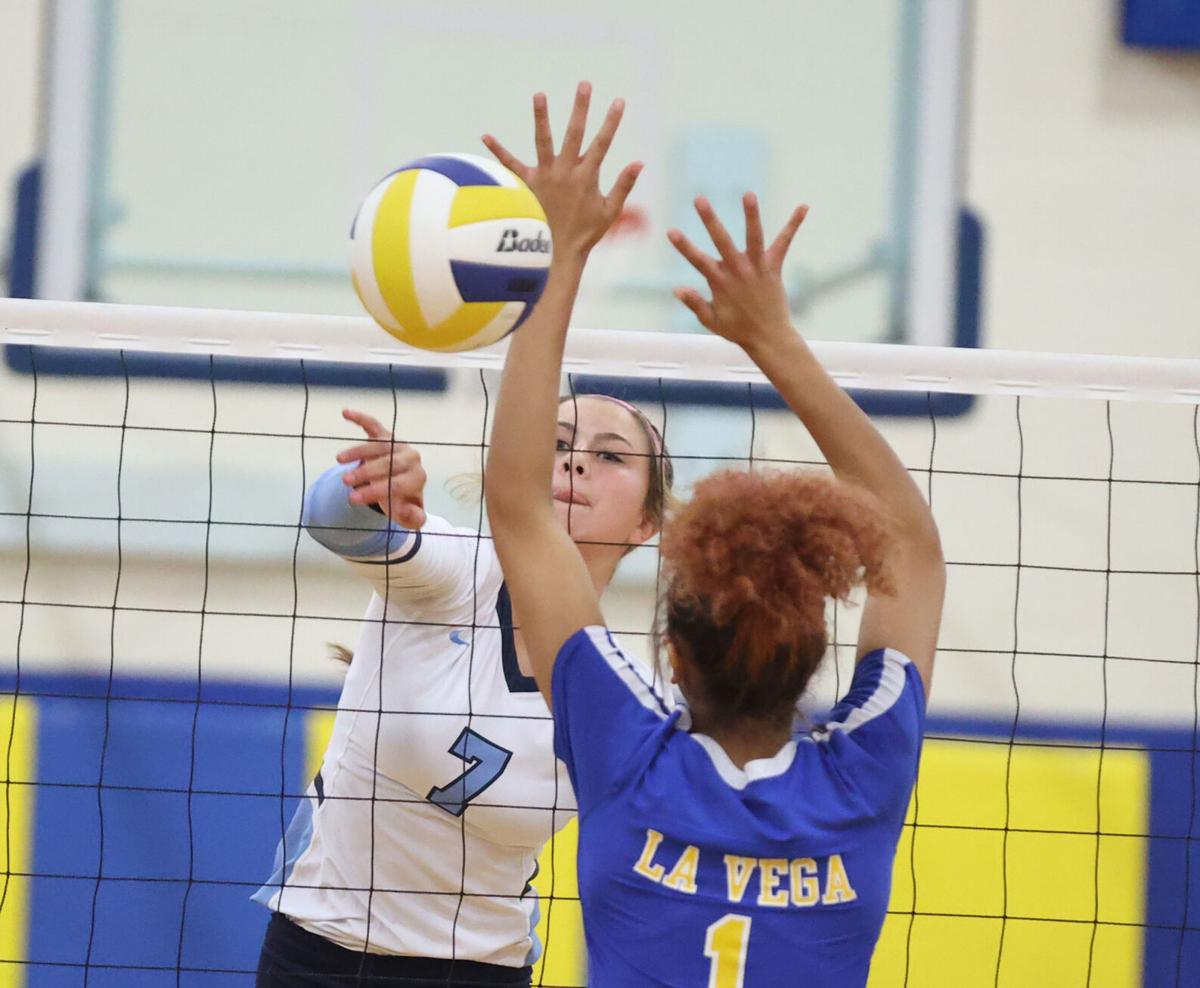 China Spring’s Lindsey Wilcox hits over La Vega’s Ashtyne Horn in the first set. One of a whole arsenal of heavy hitters, Wilcox had four kills for the ninth-ranked Lady Cougars. 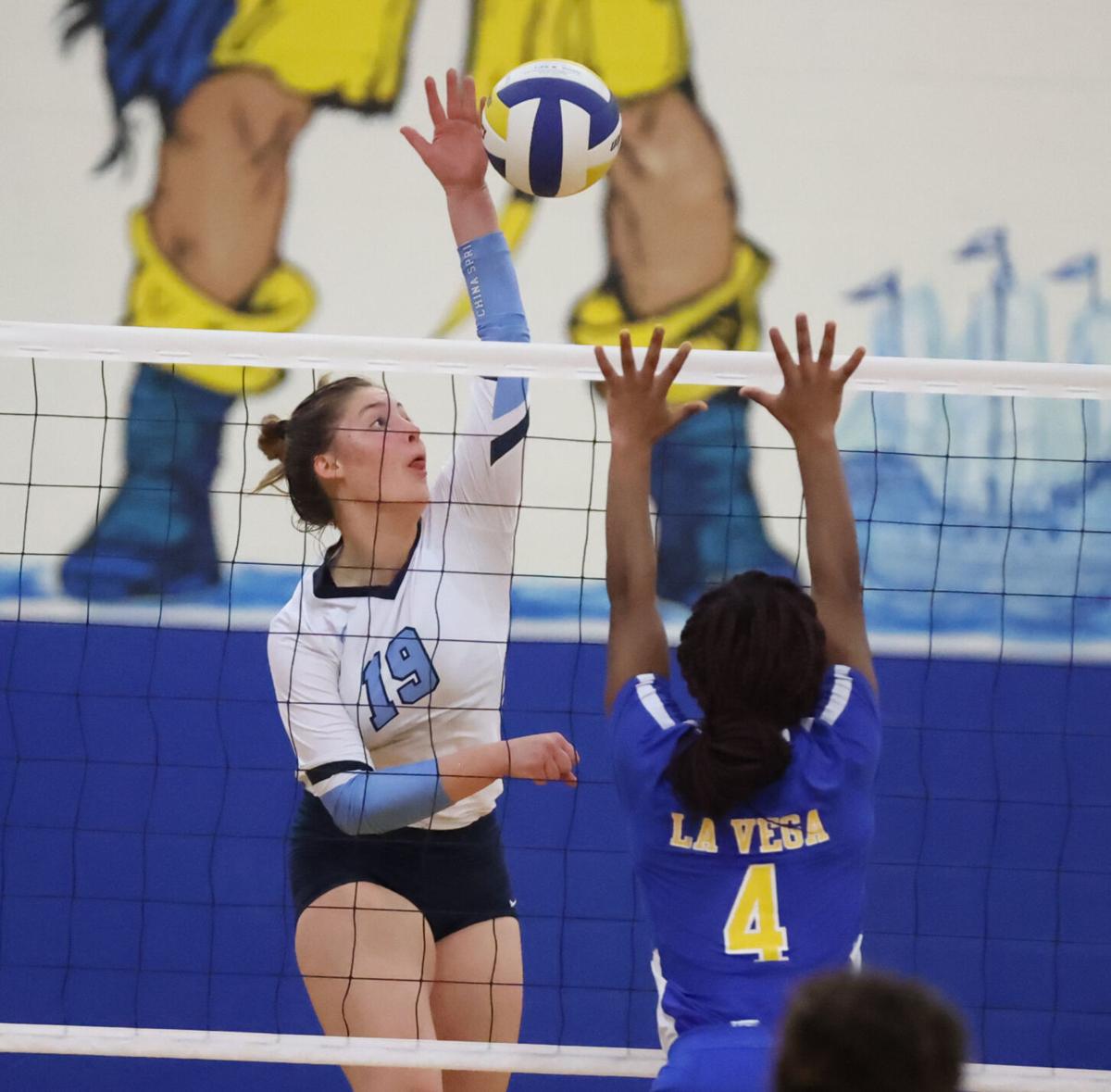 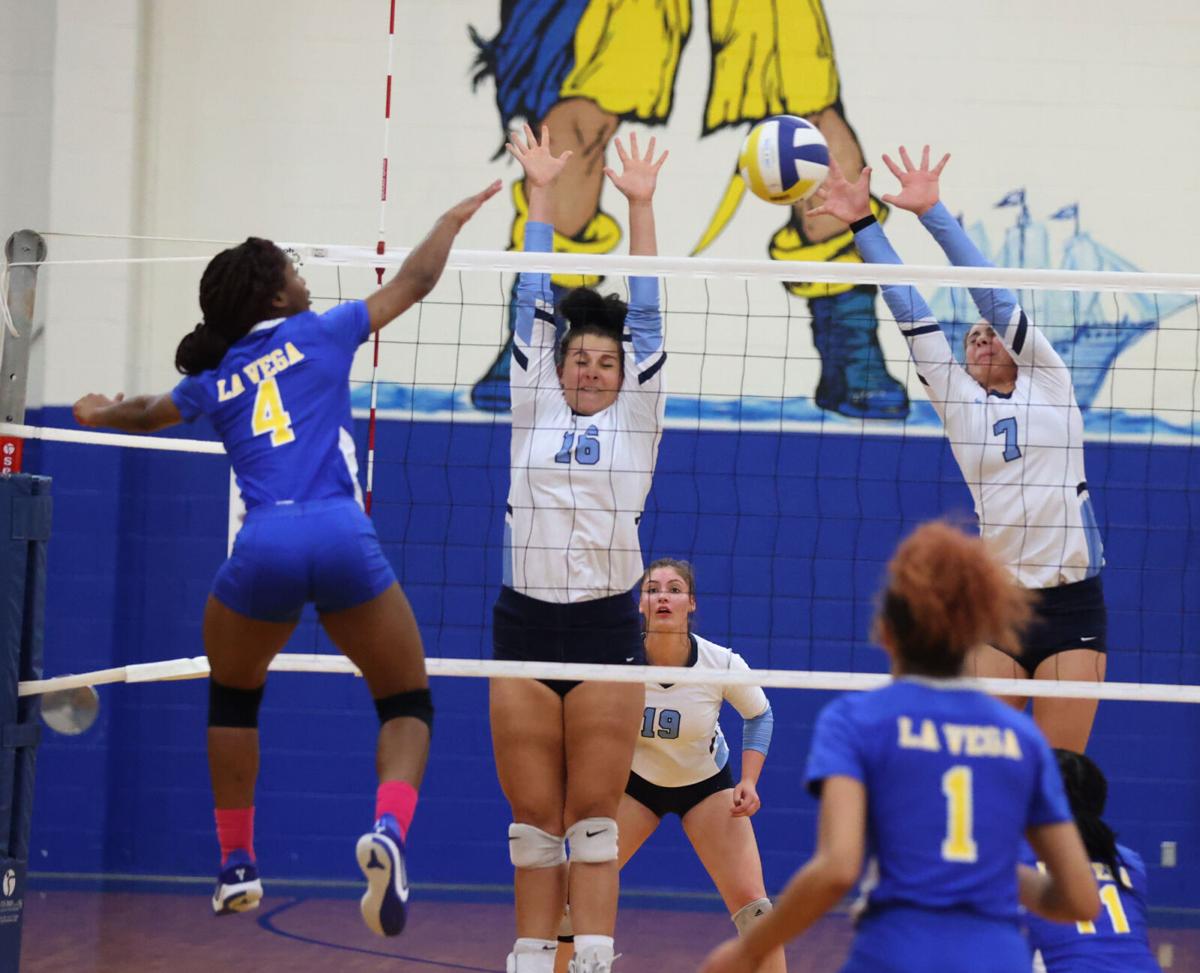 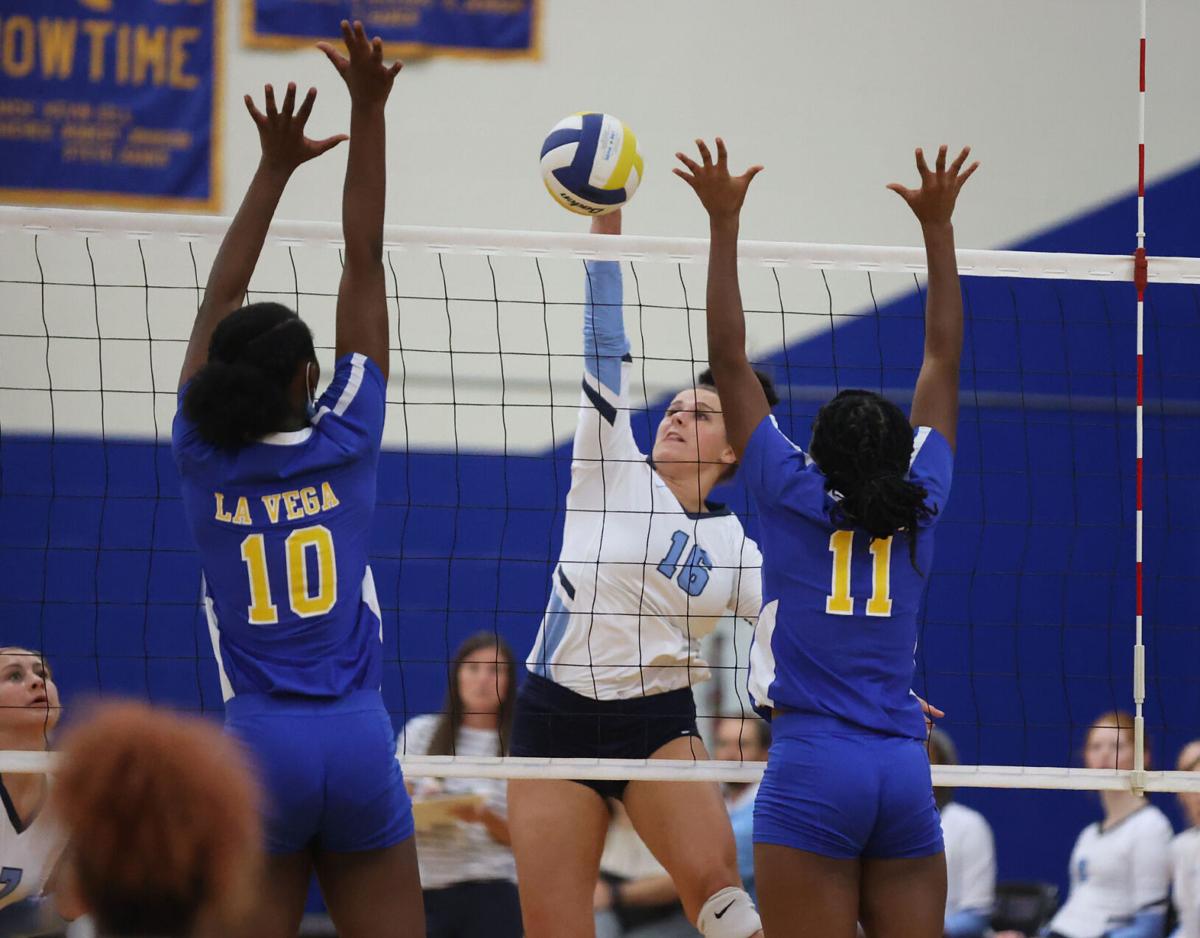 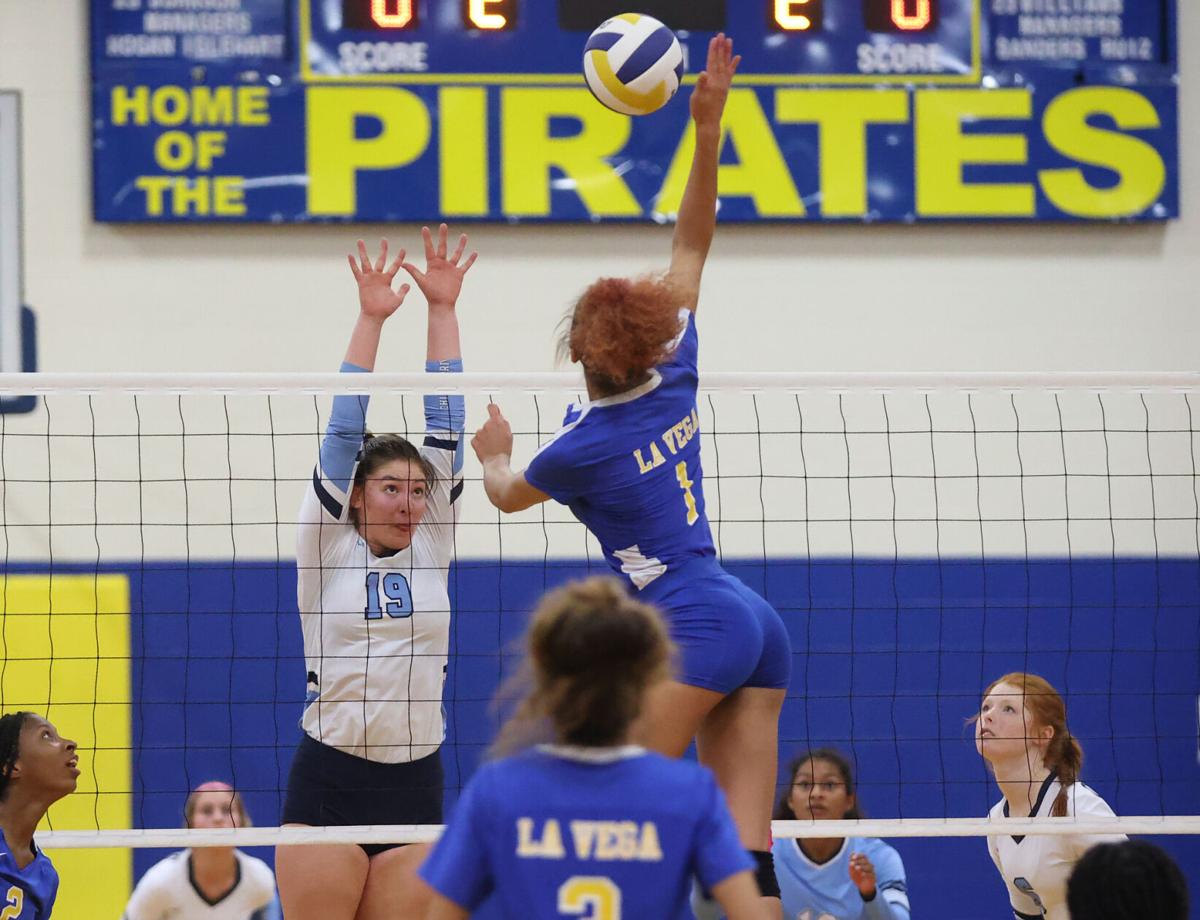 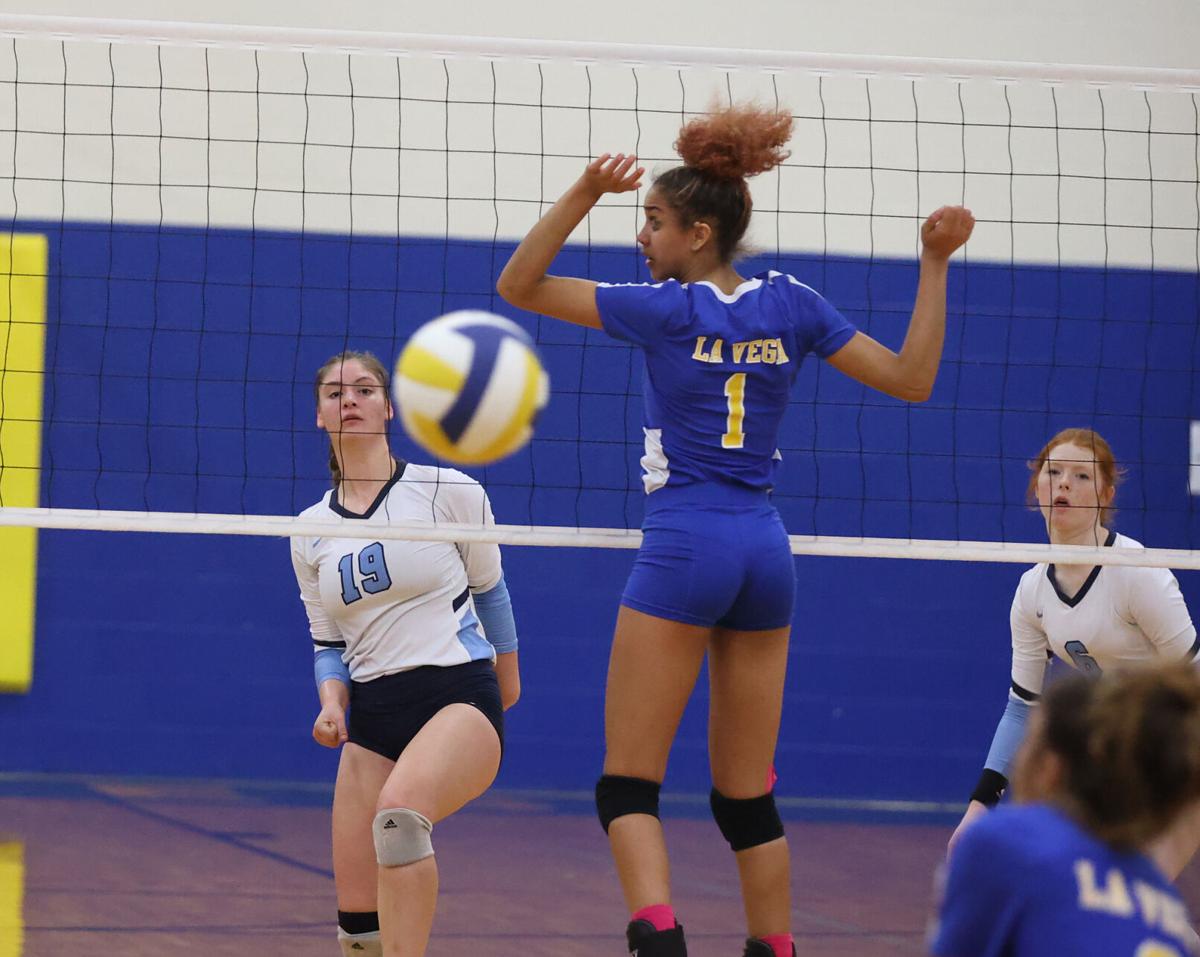 China Spring's Kadyne Emmot watches her spike sail in for a winner over La Vega's Ashtyne Horn in the first set. Emmot had a match-high 12 kills. 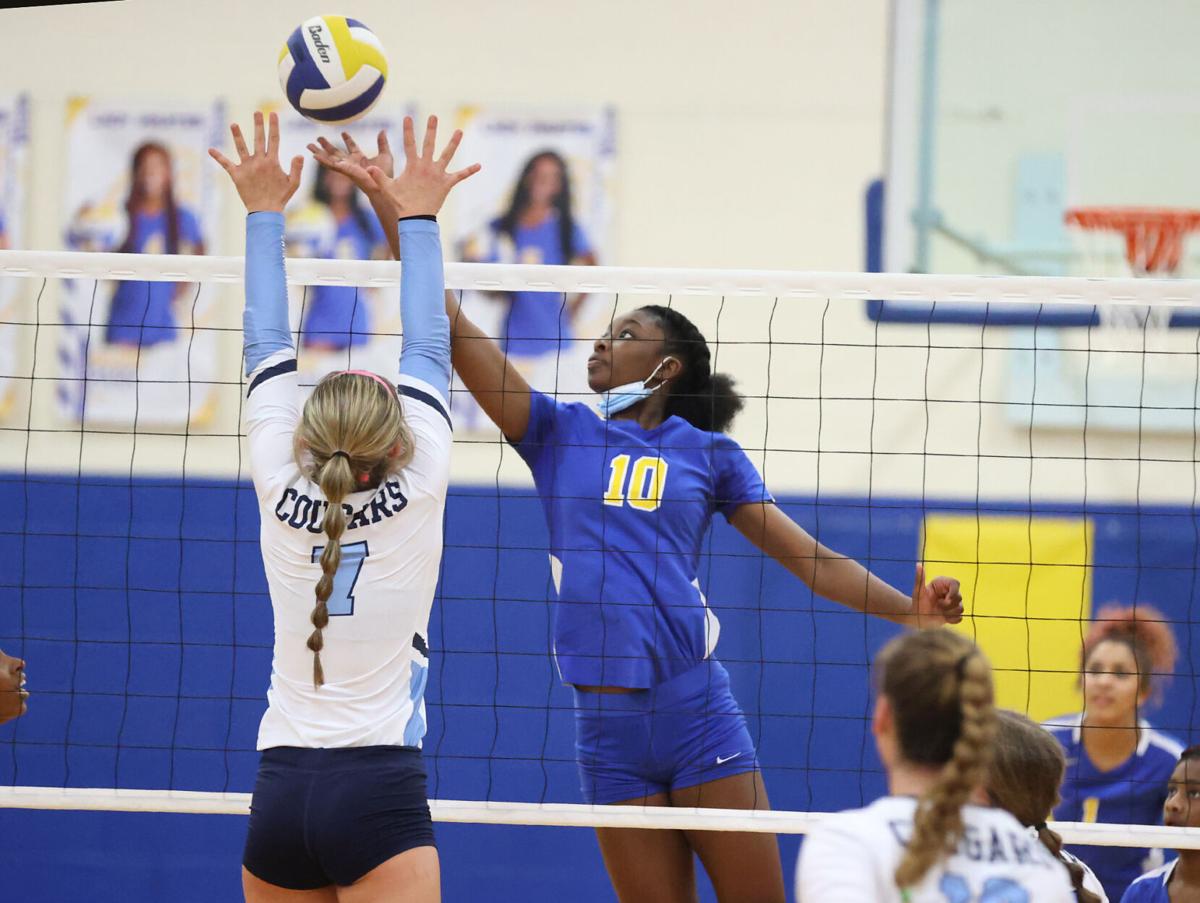 As seen on their T-shirts and signage, China Spring’s volleyball team carries a “Pound the Stone” mantra. It particularly pertains to the idea of grinding away even when you don’t feel like it.

But if you consider the volleyball itself a rock, well then China Spring is pretty good at pounding that stone, too.

The ninth-ranked Lady Cougars performed some heavy-duty pounding as the match progressed to turn back rival La Vega, 25-21, 25-15, 25-10, in District 18-4A action on Tuesday night at the La Vega Gym. The win was the ninth straight for China Spring (27-9, 6-0) and kept the Cougars perfect in district play, as they have yet to drop a set to a league opponent.

“Every game is about perfecting and trying to make us better every time,” said China Spring coach Melissa Cole. “So we focus on, obviously, our tangibles and intangibles, but just trying to continue to do what we need to do to be a better team every single game. We knew they were going to come out and get after us.”

Indeed, La Vega’s young and rebuilding team gamely stuck right on China Spring’s hip for the first set, and certainly threatened to be the first of the Cougars’ district foes to steal a set away. The teams traded the lead back and forth for the first 20 points, and later after a Sydney McKinney rejection at the net, La Vega trailed only 16-15.

But China Spring didn’t make last year’s Region III-4A final or win 26 matches coming into the night by accident. The Lady Cougars pulled together and responded to make the savvy plays they needed, including a slick dump from sometimes-setter Kadyne Emmot. They finally seized the 25-21 win when La Vega served long of the back line.

Every team could use a weapon like Emmot, who represents the bazooka in China Spring’s gun cabinet. That is, when she’s not the slingshot. The senior lefthander applied some added pressure to La Vega in the second set as she found a rhythm from the service line. She jumped and swatted four straight corkscrew serves that whistled in for aces as China Spring built a quick 8-2 lead.

“We do have good servers,” Cole said. “Right now we’re up and down. We do have a tough serve, so a lot of times we might miss a serve. But Kadyne got back there in the second set, Kayla (Peoples) got on a roll in the third set. It does pay off when we can get that going.”

La Vega didn’t flinch, and outscored China Spring 10-7 over the next stretch to pull to within 15-12 following an Ashtyne Horn thumper. The Cougars kept pounding away, though, and closed the set on a 10-3 run that included three more service aces.

“They finally started applying that and working around that one blocker (McKinney), and moving the ball more,” Cole said. “These girls are pretty good adapting and adjusting. They do a good job of that, and they made those adjustments in the second set.”

La Vega coach Suzette Gill has coached plenty of playoff teams over the years, and knows what it takes to play at that level. She was proud of the way her team played in stretches, but still expressed frustration over “mentally checking out” late in the match.

Certainly, when China Spring crests a hill and starts angling downhill, it’s tough to slow down. The Cougars scored the first 15 points of the third and final set. La Vega lost some confidence and its passing became more ragged, and China Spring’s Lindsey Wilcox twice feasted on Pirate overpasses with easy stuffs at the net.

“We’re very young and I hope playing a team like China Spring can get us ready,” Gill said. “I think that at times we played just as well, but we just mentally have to keep ourselves in the game. When we check out, we check out. When we learn to do those things — and hopefully this team will grow and learn to do those things — we’ll be successful.”

Horn certainly came to play for La Vega. The senior swooped her way to a team-best 11 kills to go with two blocks, while McKinney pocketed three blocks.

But China Spring has an entire drum line of percussion thumpers. The Lady Cougars boast a deep and talented roster, and Cole keeps the substitutions flowing freely, so plenty of players get a taste of the action.

“I want my kids to be versatile,” she said. “We run out different serve-receive in places. We want someone else coming in and doing middle here, swinging here. But I think if you’re able to do that, a lot of times it gives you an advantage as far as offensively having surprises that the defense isn’t expecting. … . I like moving them around, letting them do different things. I think it only makes us better.”

Emmot swatted 12 kills and seven aces to lead all players in both categories. Kayla Peoples dropped in a trio of aces, while Wilcox and Lindsey London spanked four kills apiece.

China Spring will take on second-place Robinson on Friday, and the Cougars expect to get the Rockets’ best effort. Thankfully for Cole, there are two more practices between now and then, because she said that’s where the rock-shaping geology most materializes.

“We talk about it every practice,” Cole said. “We have a quote that starts just inside (the gym) that says, ‘It starts here and now. Dominate every day.’ It’s about dominating practice, too. Because that where we’re going to continue to get better. So that’s where the pounding the stone comes in. It takes place in practice. What you do in practice shows up on the day the lights come on.”

China Spring’s Lindsey Wilcox hits over La Vega’s Ashtyne Horn in the first set. One of a whole arsenal of heavy hitters, Wilcox had four kills for the ninth-ranked Lady Cougars.

China Spring's Kadyne Emmot watches her spike sail in for a winner over La Vega's Ashtyne Horn in the first set. Emmot had a match-high 12 kills.