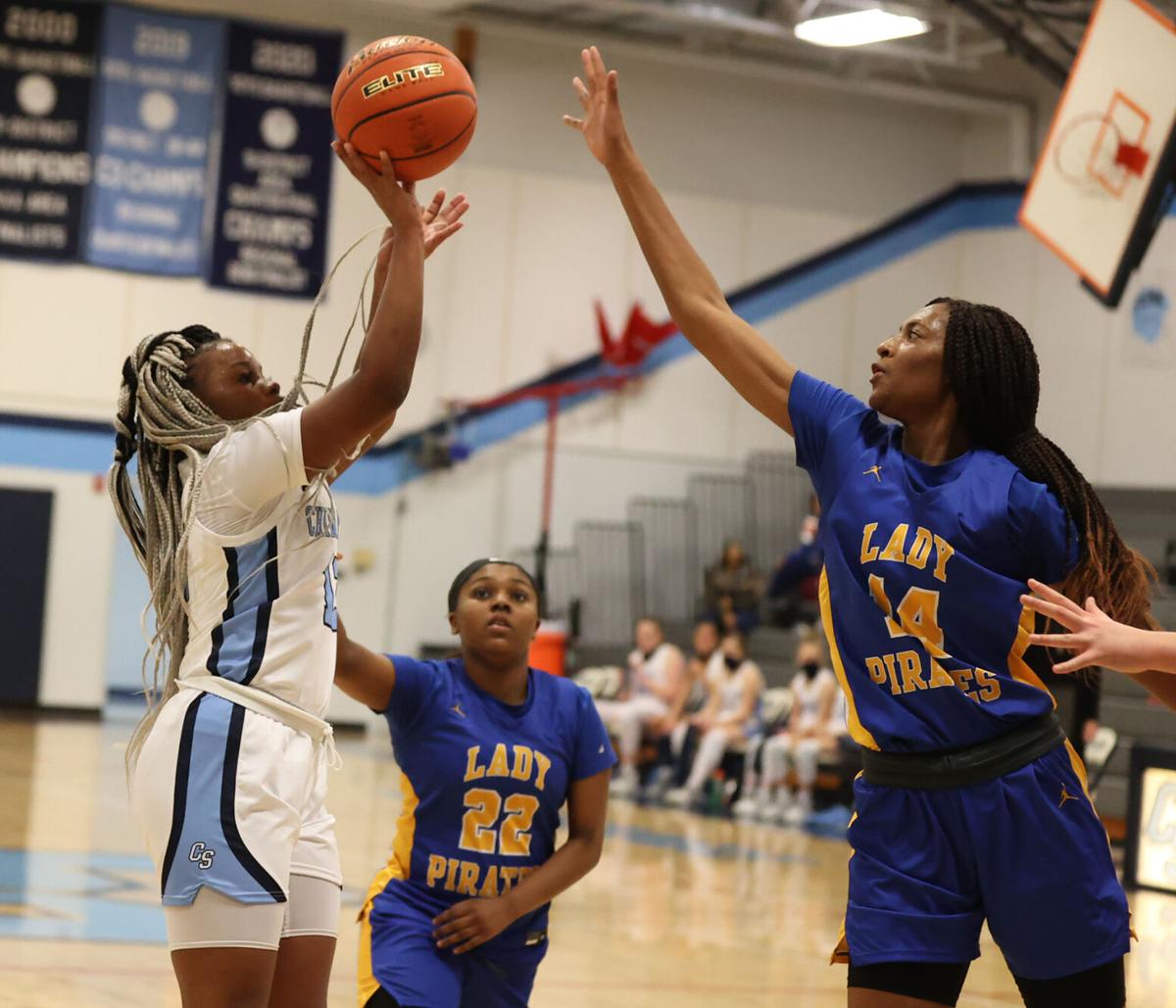 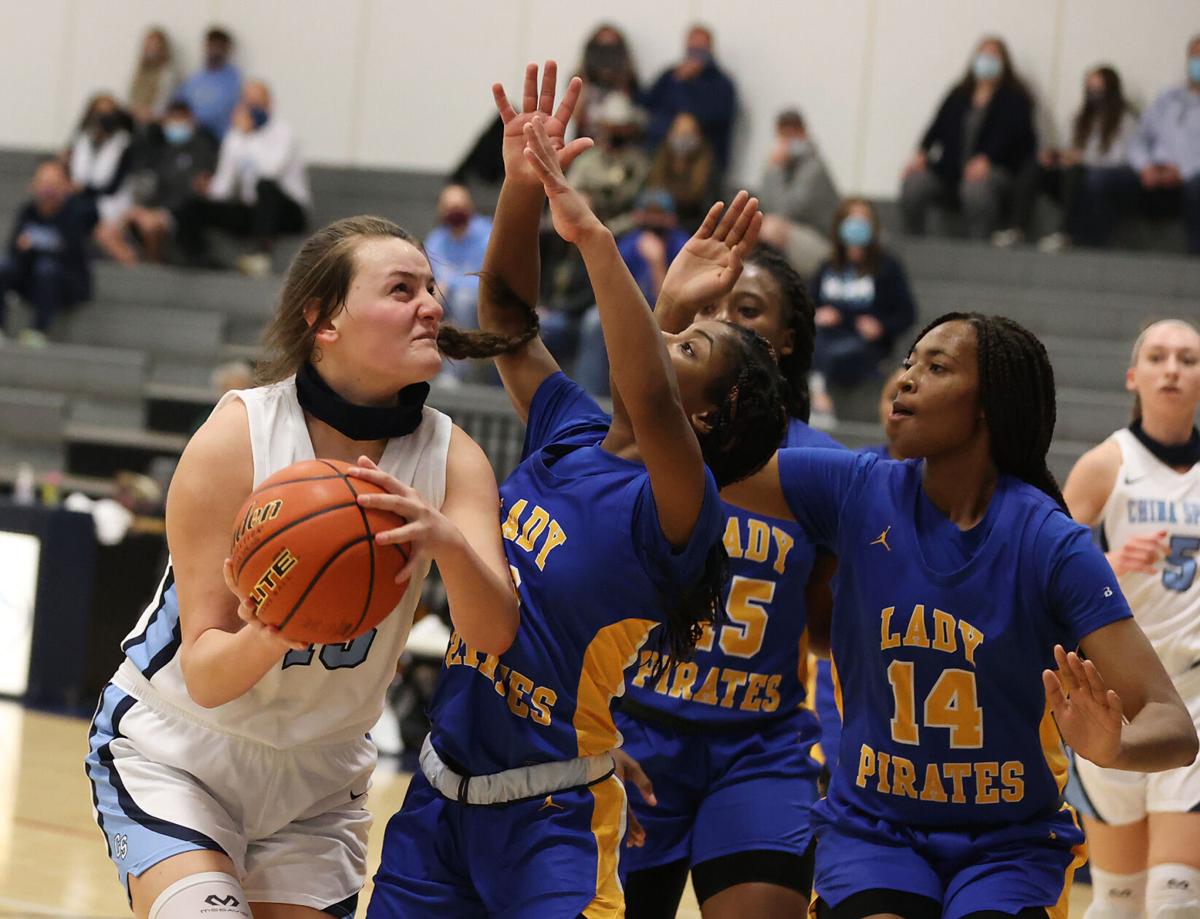 China Spring's Brylee Smith (left) had 12 points and nine rebounds in the Lady Cougars' 44-26 win over No. 22 La Vega on Friday night. 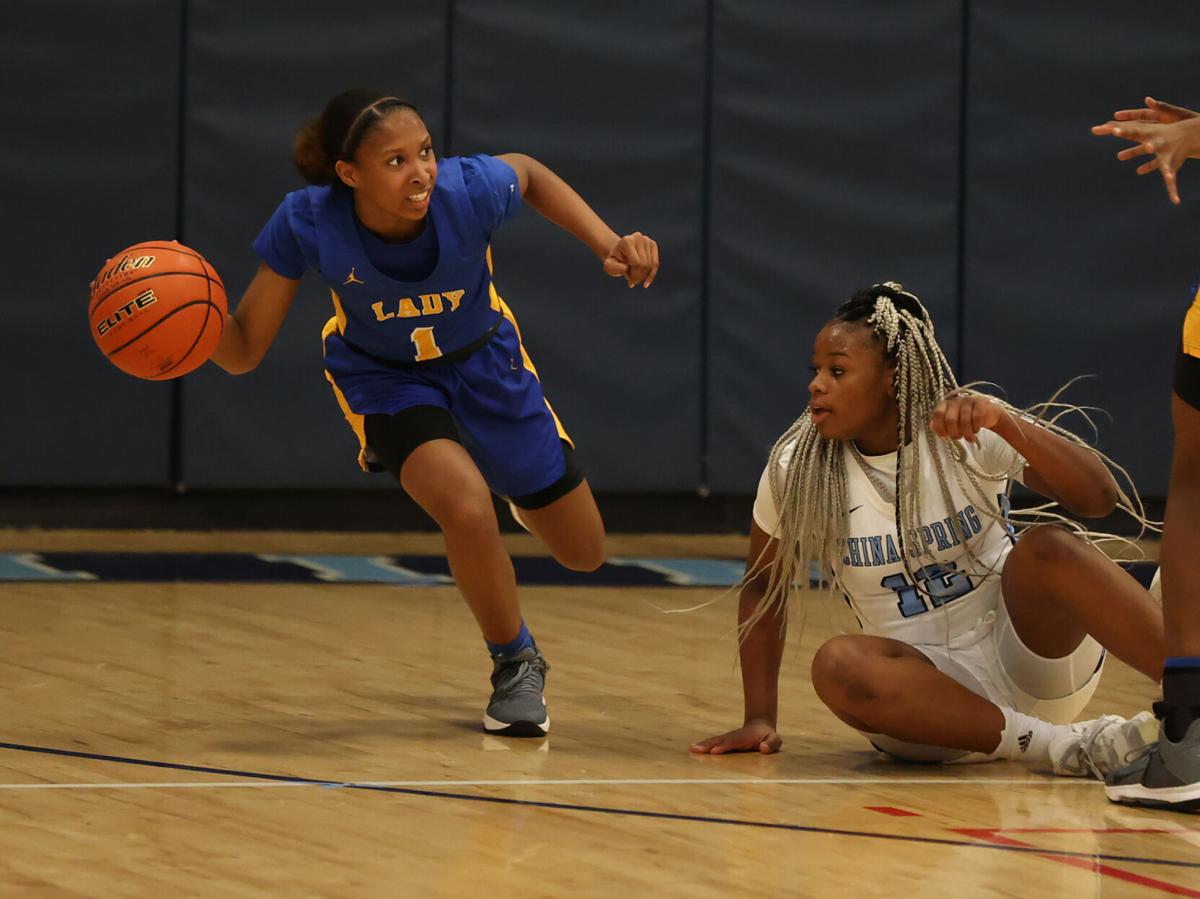 La Vega's Mar'cyah Willis (left) comes up with a loose ball after battling China Spring's Kayla Peoples (right) in the first half. 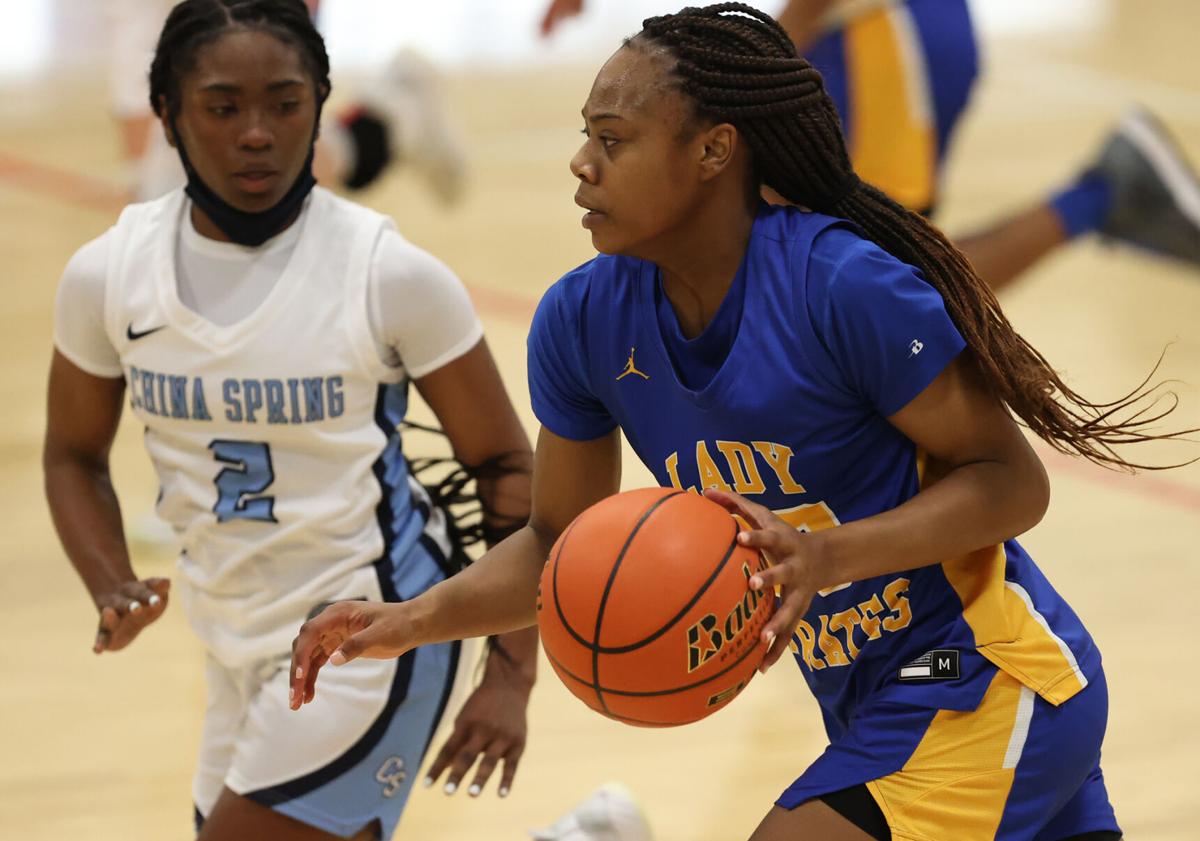 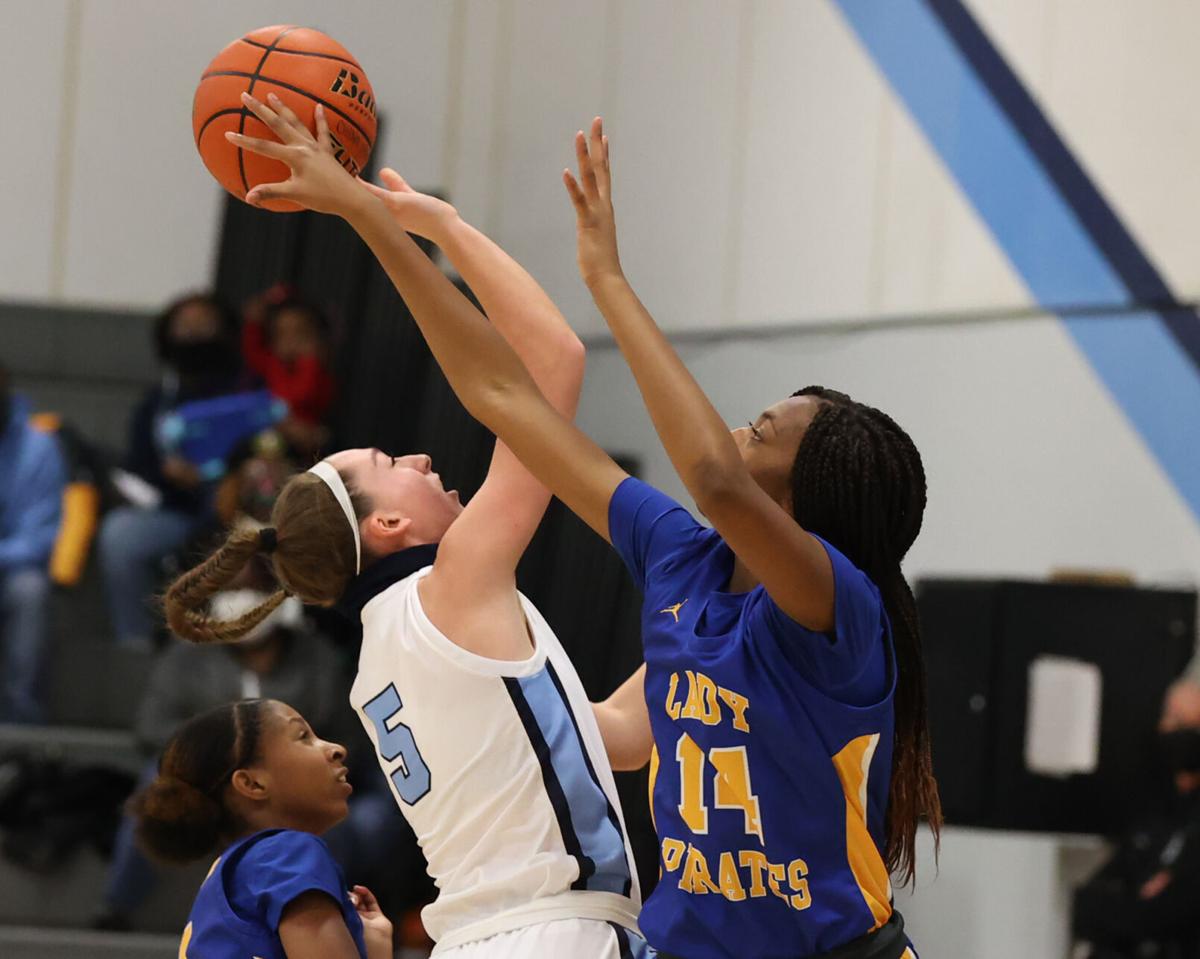 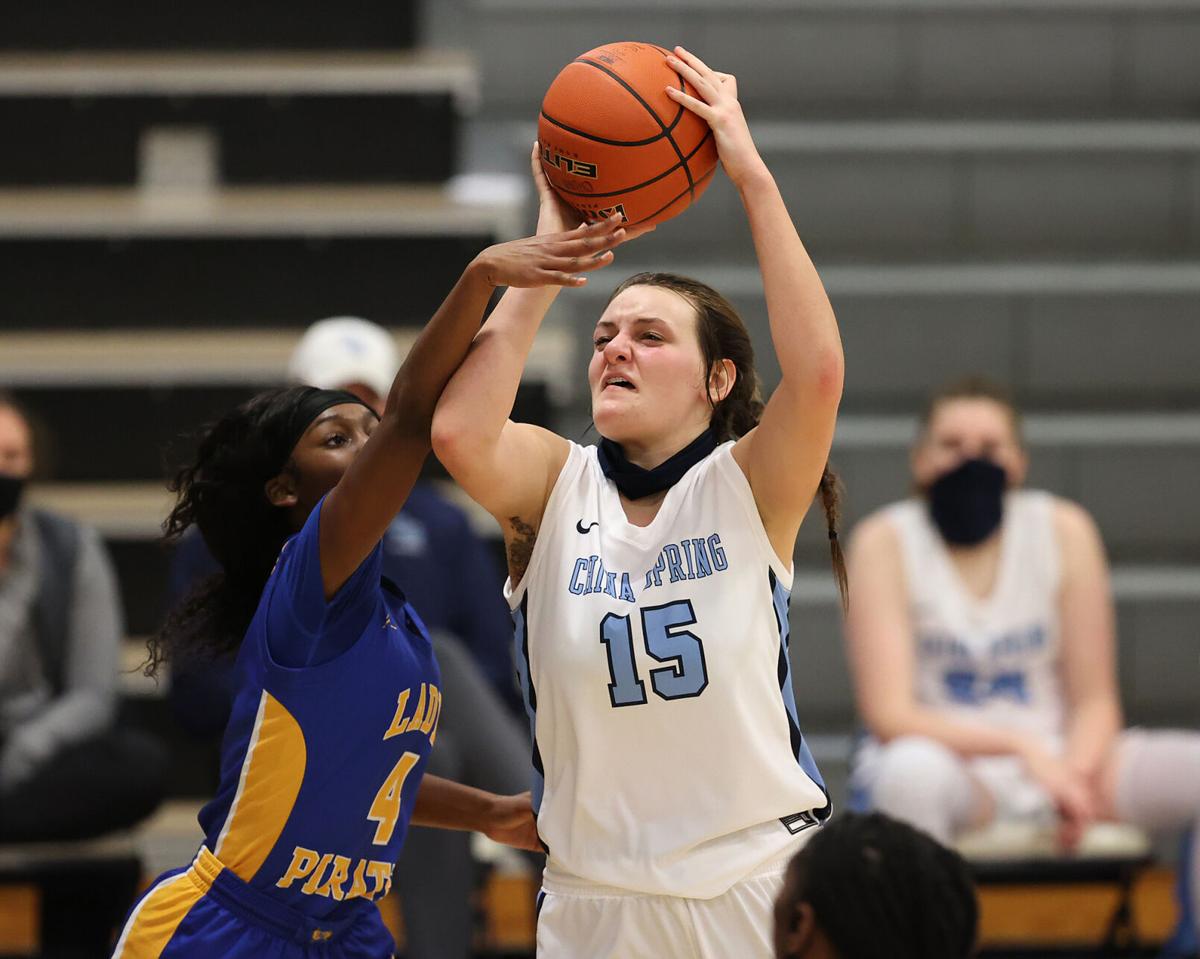 China Spring's Brylee Smith (right) is fouled by La Vega's Adri'nae West in the second half. 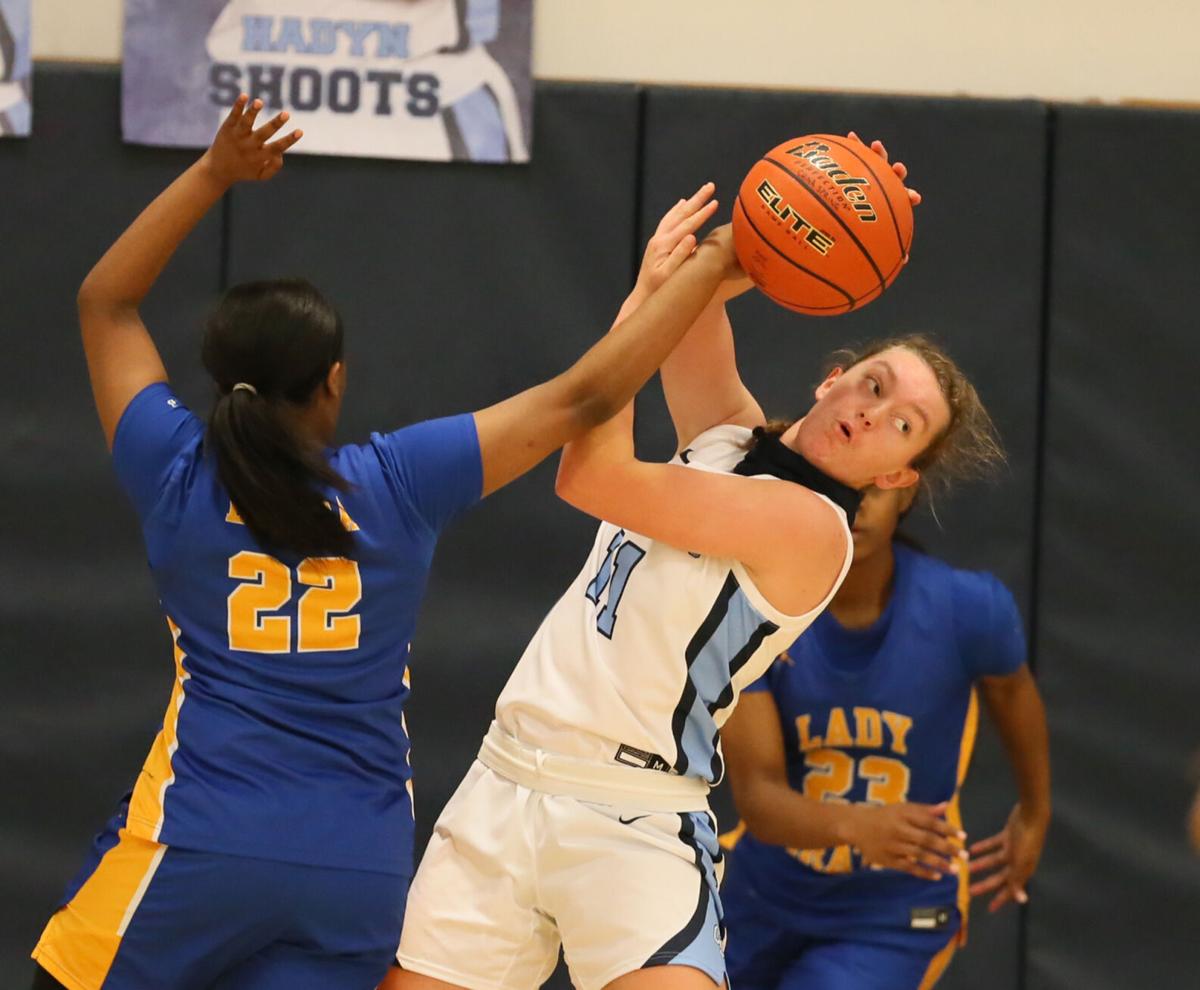 China Spring's Hadyn Shoots (right) pulls down a rebound over La Vega's Kaley O'Neal (left) in the first half. 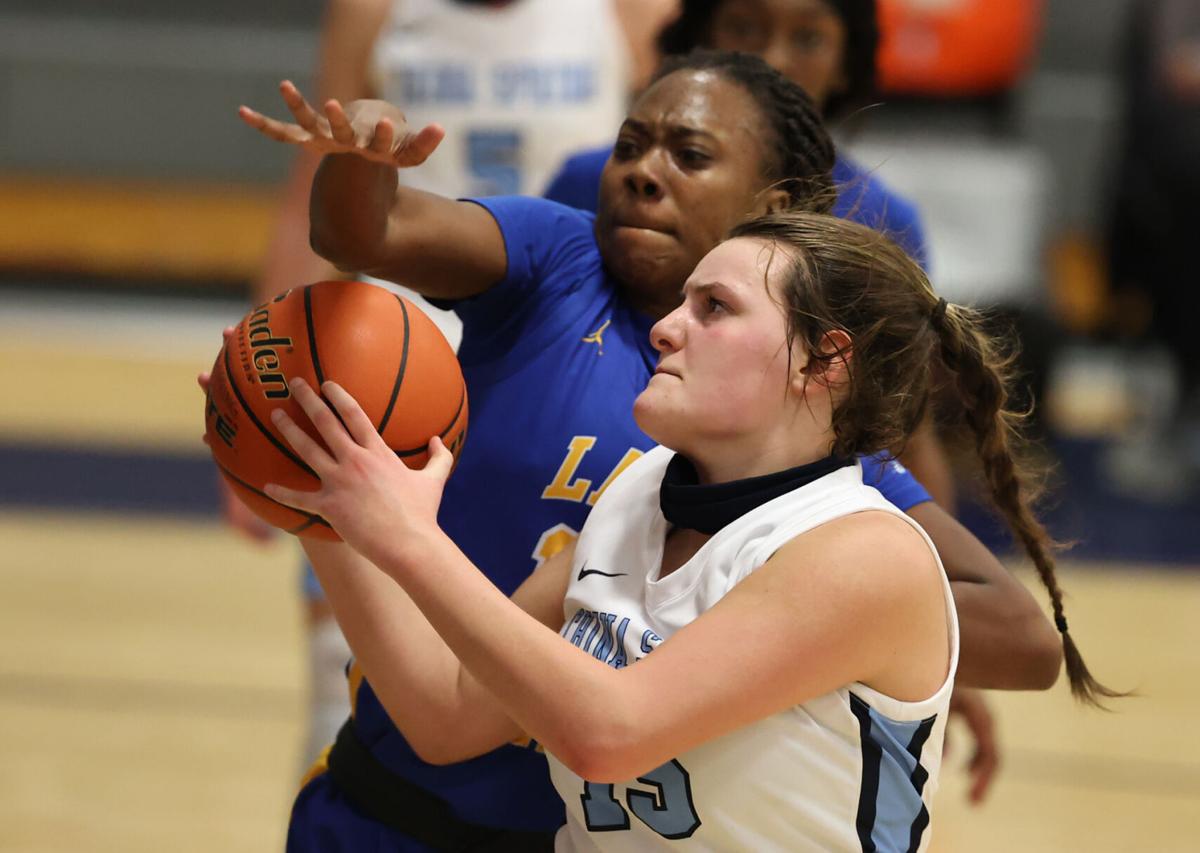 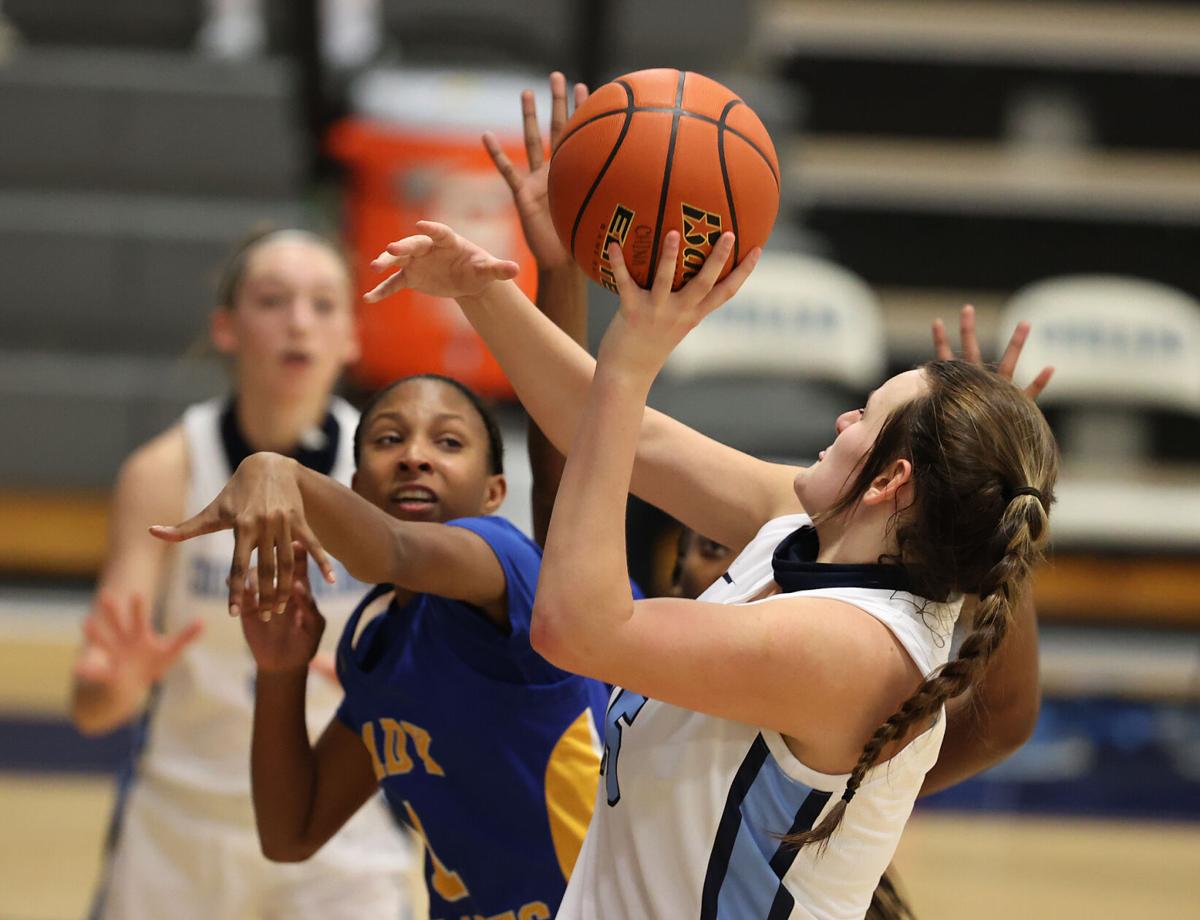 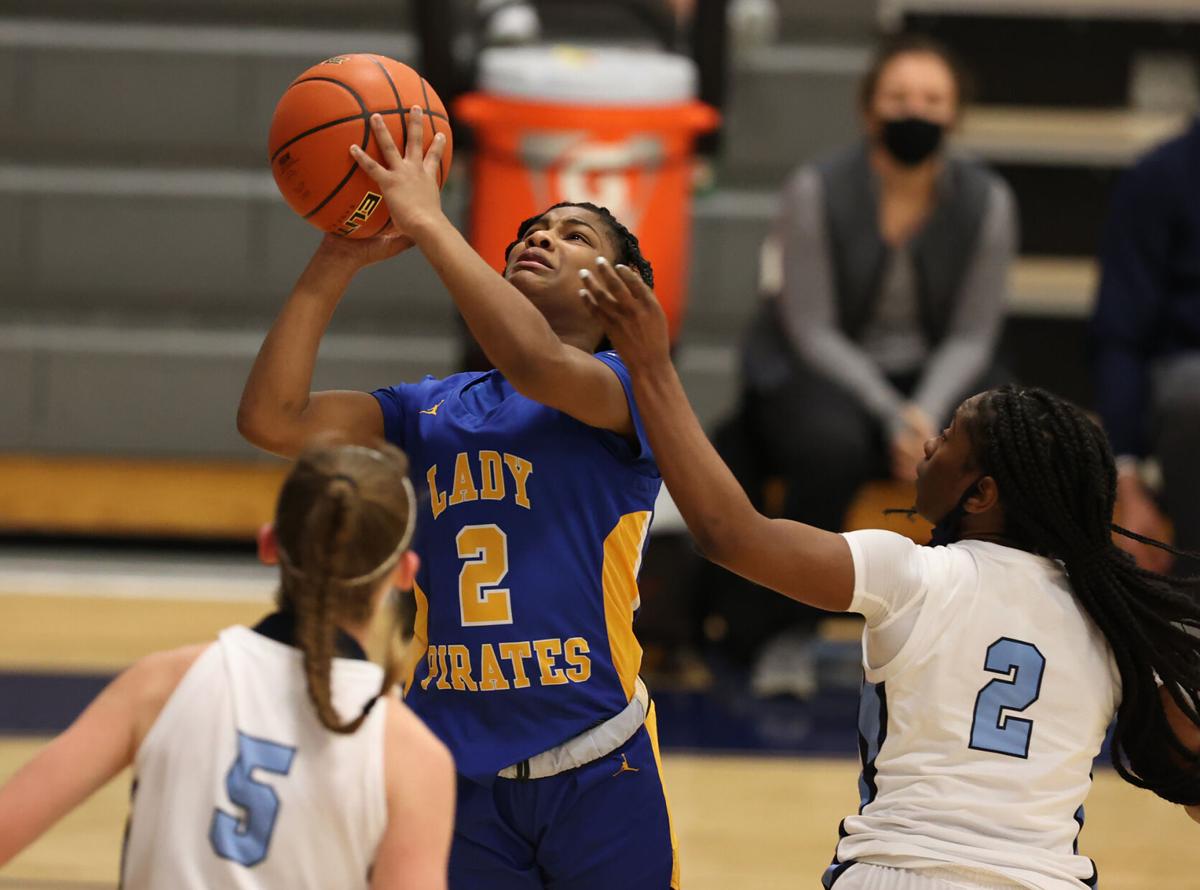 It’s only counterintuitive if you do it wrong, and China Spring was oh-so-right on this night.

The Lady Cougars successfully coaxed No. 22 La Vega into playing at its pace. By slowing things down a bit, China Spring leaped forward to seize a significant 44-26 win on Friday at the China Spring Gym. With the victory the Lady Cougars climb over La Vega into first place in District 18-4A, and deal the Lady Pirates their second straight district loss after four wins to open league play. La Vega also lost to Robinson earlier this week.

Every team enters the game with a plan. China Spring just stuck to the blueprint better than most.

“Execute. We had our game plan (in past games) and the thing we’re not doing is not executing that game plan,” China Spring coach Kristi Mize said. “We get flustered or we try and do too much or we try to take on more responsibility than we should. So tonight our word for the game was execute.

“So, play the way we want to, don’t let anyone else determine or dictate how we’re going to do things. I felt like the girls did that. We had a few little moments where we kind of forgot, but I thought they executed really well.”

When these teams first encountered one another on Jan. 5 over on La Vega’s home court, the Lady Pirates survived with a 49-47 win. So this one had all the makings for another chin-to-chin, to-the-brink tussle.

But China Spring (13-6 overall, 5-1 district) sent an instant message that this game might follow a different storyline. They doggedly defended and challenged La Vega’s shots, forcing the Lady Pirates (13-7, 4-2) into some low-percentage offerings. After neither team scored for the first two-plus minutes, China Spring found its rhythm simply by executing its offense and ran off the first eight points of the night, taking an 8-0 lead when senior center Brylee Smith bodied inside for an easy bucket.

The Lady Pirates finally broke their drought when Kiyleyah Parr sank a 3-pointer at the 3:28 mark of the opening quarter. Parr drilled another long-distance bomb later in the quarter, helping La Vega cut the gap to 10-8 by the buzzer’s proclamation.

The score remained close the rest of the first half, as La Vega landed a few counterpunches to keep the Lady Cougars in sight. For instance, late in the second quarter China Spring’s Riley Shoots shot down the lane for a sweet runner, but La Vega’s Kaley O’Neal responded with a similarly effective drive and scoop on the other end. China Spring held a 19-15 lead at the halftime break, signaling that it was still anyone’s ball game.

However, nothing came easy for La Vega on this night. China Spring made the Lady Pirates work, and ultimately limited the Lady Pirates to a single field goal for the first 12-plus minutes of the second half.

In the process, China Spring was able to stuff its cushion with some net-covered feathers. The Lady Cougars extended their lead to 27-19 by the end of the third quarter, and then junior Kayla Peoples gave her team reason to exhale when she bottomed out a mammoth 3-pointer early in the fourth quarter on a kickout pass from quick-as-a-hiccup point guard Mochieyveon Hobbs.

Peoples’ big splash gave China Spring a 32-19 edge, and forced La Vega to get more desperate on defense, gambling and lunging for steals.

“It was huge. Kayla’s 3 was huge,” Mize said. “I felt like that calmed everything down a little bit instead of having all that chaos. It gave us a little bit more cushion, but it was huge just to put the ball in the hole at that time.”

China Spring put three players in double-figure scoring, led by Brylee Smith’s 12. The senior also chipped in nine rebounds, three blocked shots and a pair of steals in a well-rounded effort before fouling out with 1:21 to go. Peoples and Riley Shoots contributed 11 points apiece.

But it was the other Shoots sister, sophomore guard Hadyn Shoots, who seemed to quietly affect every play. Hadyn scored only two points, but stuffed the box score in plenty of other ways, compiling seven rebounds, four assists and five steals. She and China Spring’s other guard also stayed calm when La Vega dialed up its defensive pressure late in the game to try to force the Lady Cougars into turnovers which mostly didn’t come.

“She can be in the box score, and it’s great because it’s little things,” Mize said of Hadyn’s effort. “Fundamental things that she was taking care of tonight. She was all out there, did a great job. It’s nothing like you’re going to see 15 points, but you’re going to see it in the box score. She snuck up on them several times. I thought Riley Shoots too, both Shoots girls did really well. She put in some big baskets in the first half that we needed. They just played smart.”

Long after the game ended, a group of China Spring fans and parents lingered in the gym. When the players finally started to trickle out of the locker room, those fans whooped and hollered, applauding a breakthrough win for the home team.

Rosebud-Lott moved to 11-7 overall and 7-2 in District 17-2A play with the win. Allissa Rodriguez and Jordan Pinner dropped in 14 points apiece to pace Bruceville-Eddy.

Ashlyn Wachtendorf swished in a team-leading 17 points, and the Lady Leopards kept up their heady defense in staying perfect in District 17-3A play.

Lorena (17-5, 9-0) swept the season series over the rival Trojanettes with the win.

In a rematch of last year’s Region III-4A quarterfinals won by China Spring, the 19th-ranked Pirates earned a measure of redemption with a hard-fought district win.

Randy Woolf Jr. continued his recent string of powerful efforts with 18 points and 15 rebounds for the district-leading Pirates (10-2 overall, 4-0 in 18-4A). Marcus Willis Jr. added 15 points and Jordan Rogers contributed 13 for La Vega, which will look to complete a perfect run through the first half of district play at Madisonville on Tuesday.

China Spring dropped to 10-9 overall and 2-2 in district play with the loss.

China Spring's Brylee Smith (left) had 12 points and nine rebounds in the Lady Cougars' 44-26 win over No. 22 La Vega on Friday night.

La Vega's Mar'cyah Willis (left) comes up with a loose ball after battling China Spring's Kayla Peoples (right) in the first half.

China Spring's Brylee Smith (right) is fouled by La Vega's Adri'nae West in the second half.

China Spring's Hadyn Shoots (right) pulls down a rebound over La Vega's Kaley O'Neal (left) in the first half.