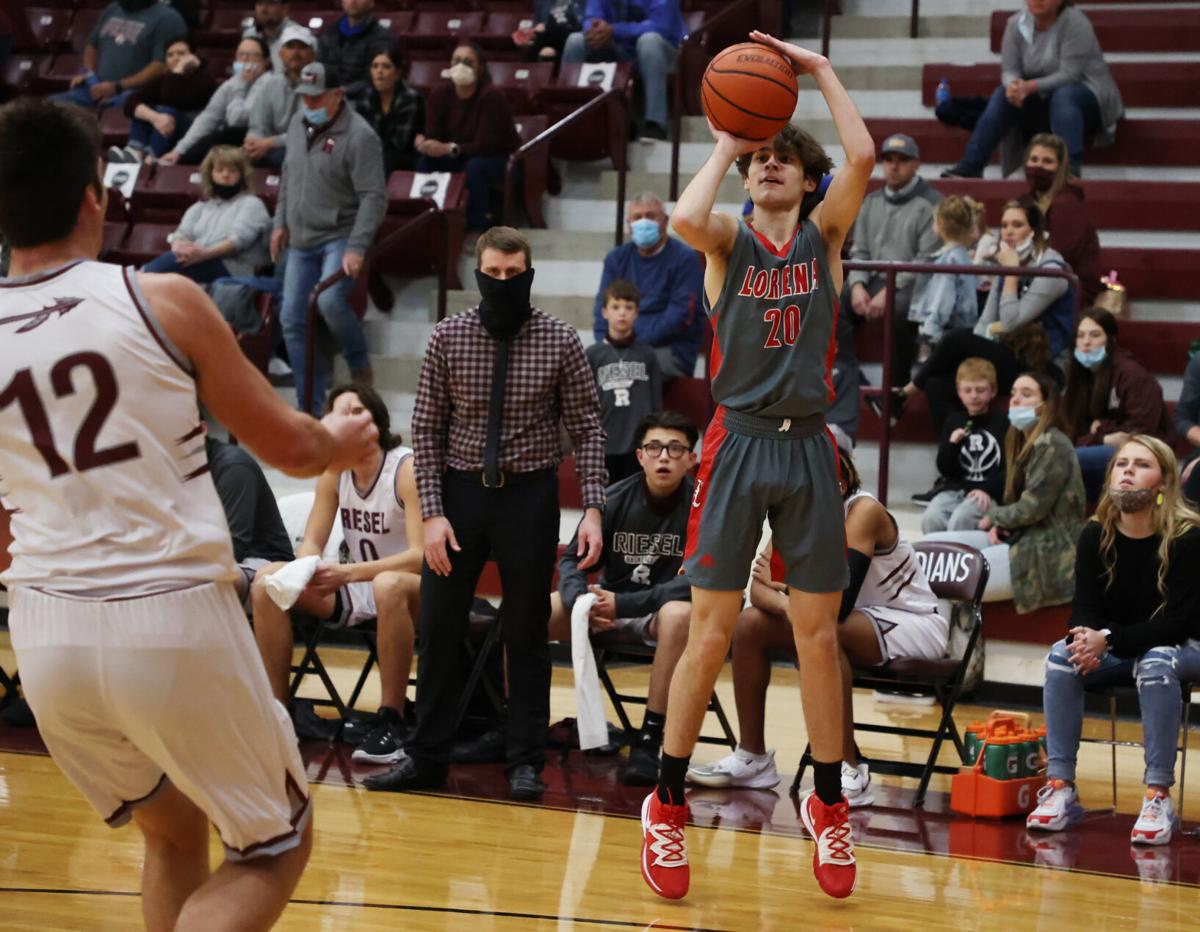 Lorena’s Graham Goolsby and the Leopards have made school history with their first-ever basketball trip to the regional semifinals. 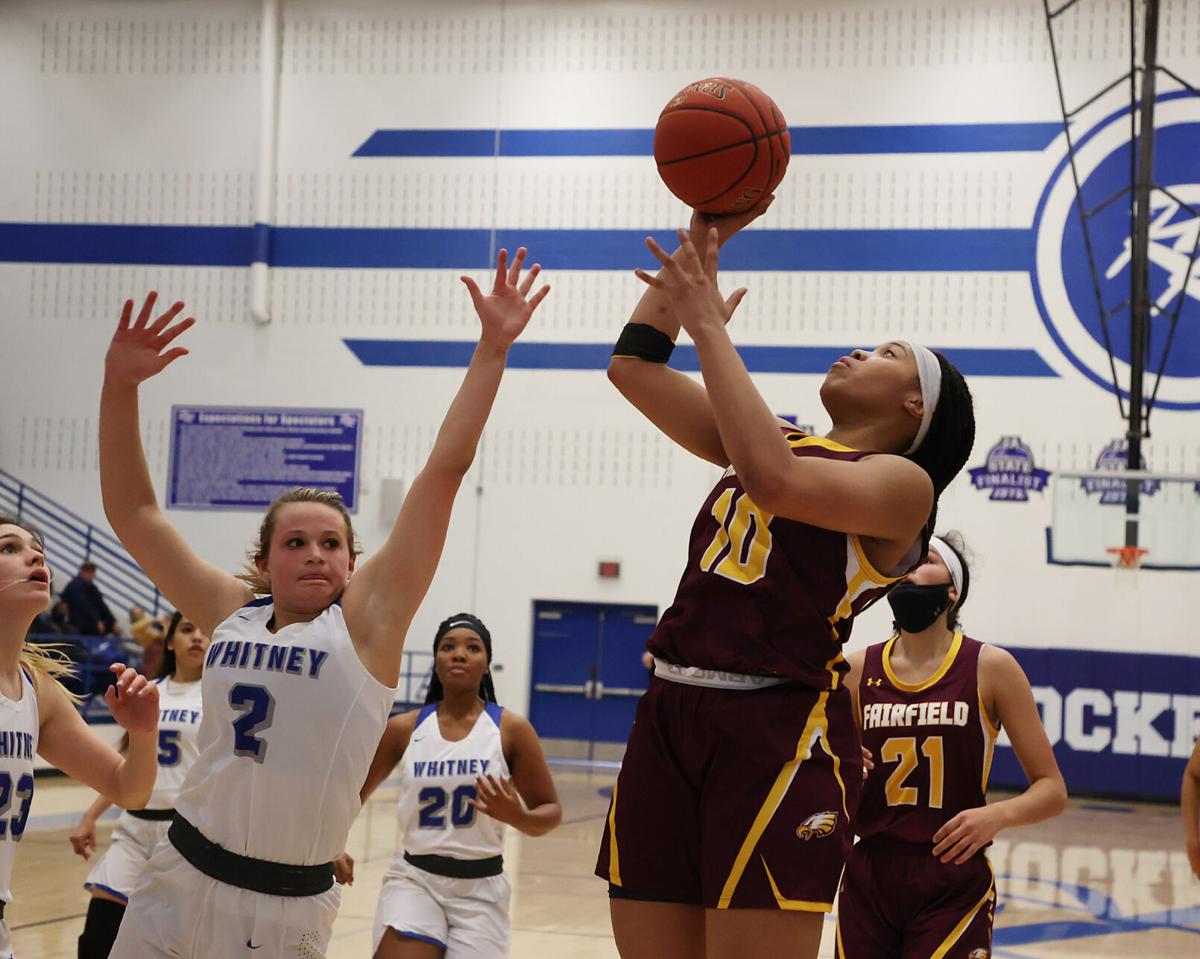 Breyunna Dowell (right) has again been a major contributor in the Fairfield Lady Eagles’ return to the state tournament. 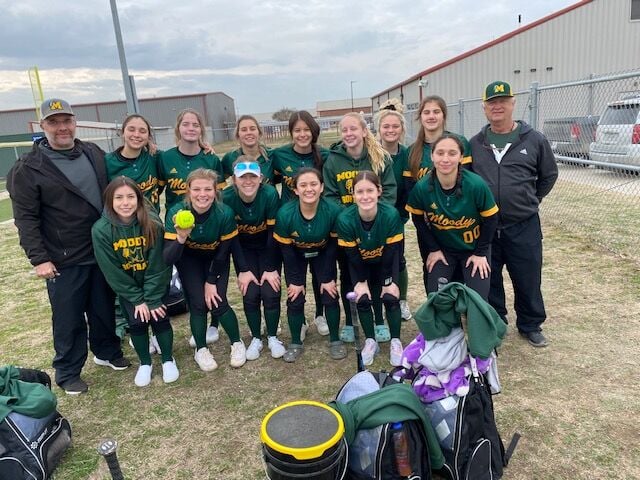 Nevertheless, it turns out a drop down from Class 4A to 3A has worked out well for Central Texas’ last two remaining UIL playoff basketball teams, the Lorena boys and the Fairfield girls.

Both have their own stories of how they’ve reached this point and why they still harbor dreams of a 4A — wait, no, 3A — state championship.

Lorena’s trip to the Class 3A regional semifinals marks the deepest basketball playoff run in school history. This landmark journey was by no means a given when the season began back in November. But Matt Jackson considers himself blessed with a hard-working and especially unselfish group of players, and that’s as much a reason as anything why they’ve still been holding practices this week.

“I think this year we had a target on our backs (moving down.) Those guys did a good job with that,” said Jackson, whose Leopards (24-4) will face East Chambers on Friday in Madisonville. “I can tell you, they prepared every game that we had this year for getting everyone’s best shot. And I think that makes you better, when everybody is going trying to get everyone’s best shot every single time. As the season went on, the guys got better, because they saw everyone’s best.”

A year ago, knowing that his team was making the move to Class 3A, Jackson brought his players over to the Region III-3A tournament at Midway. He wanted to serve up an appetizer, to stoke their hunger for this season.

Then, of course, COVID happened. The UIL eliminated predetermined regional tournament sites in response. However, the UIL also adopted a provision that allowed the four teams that made the regional semifinals to stage their own regional tournament at a single site if all four coaches agreed.

So, that’s how this weekend’s de facto Region III-3A tournament in Madisonville was born. The Lorena-East Chambers game will follow Friday’s New Waverly-Academy game. The winners of those two games will meet in the regional final at 1 p.m. Saturday for a spot in the state semifinals.

“It’s really cool,” Jackson said. “We got the idea and every single coach was on board, right when it got brought up. They were like, ‘Absolutely.’ We were all on the same page on that. We were on the phone from 6 to 10 on Saturday night trying to find a location first, and (Madisonville athletic director) Rusty Nail jumped right on us and said we’d love to do it. … Three other great coaches, it was very easy to get put together.”

Lorena will first have to get past an undefeated East Chambers (26-0) team that made the state semifinals two seasons ago. The Leopards will try their best to slay Ceasar — that is, Ernest Ceasar (not Caesar), a 5-foot-6 point guard who regularly puts up giant stat lines.

“My assistant went and scouted them when they played Diboll, think that was the quarters,” Jackson said. “He was telling me about No. 1, Ceasar. He said, ‘He’s really good,’ and I said, ‘Compare him. Tell me about him.’ He said, ‘He’s Eli Stephens, but quicker.’ I said, ‘Are you kidding me?’”

Jackson said trying to stop Ceasar’s reign will be an all-hands-on-deck kind of situation.

“The true answer to that is that we don’t have one guy who can stop him,” the coach said. “That’s who we are, we play team defense. Whenever somebody asks you what kind of defense you run, they expect you to say man or zone. My answer is always, we play team defense. So it’s going to take a full team effort to beat them and keep them out of the paint.”

That’s been Lorena’s winning blend all year, anyway. Team ball, not just on defense, but on offense as well.

It may take a village to raise a child, but it takes a team to raise a golden basketball.

“They’re a very unselfish group of kids. They don’t care who gets the glory,” Jackson said.

As for the Fairfield girls, it makes a fair amount of sense why the Lady Eagles are still alive as the playoffs move to the state semifinal round. After all, Fairfield captured its first basketball state title just a year ago back in 4A.

But, again, nothing is a given. Fairfield had to reload after losing some serious bullets from that 2020 squad, including a pair of Super Centex standouts in Braden Bossier and Jada Clark.

“We lost five seniors off the state team and two all-state players, so we weren’t really sure how things were going to come together this year,” Fairfield coach Sally Whitaker said. “We kind of feel like we struggled at the beginning of the year, just with getting into the flow of things. But with the seven returners and then our new players that we’ve added to them, they’ve just really gelled in the last month, and it’s just been kind of special to watch them play together.”

“Like everybody, the snow kind of hurt us,” Whitaker said. “It interrupted the flow we were in. We kind of struggled in a few playoff games battling back from that, but we’ve seemed to find another flow, just playing good basketball. We’re hoping to keep it going for hopefully a couple more games.”

It’s been an ensemble cast for Fairfield (26-2), with a different character stepping into the spotlight each game. Multiple players have produced 20-point games in the postseason for the Lady Eagles, though junior forward Breyunna Dowell, a former Super Centex Newcomer of the Year, has stepped up as an especially steady source of scoring and rebounding.

Even though Fairfield has run its playoff opponents ragged, Whitaker has plenty of respect for these new 3A combatants. She didn’t really know much about the teams she’d be facing at this level, but she has come to the conclusion that plenty are well-coached and tough as nails.

“We knew that we were going to come in 3A this year and we don’t have a lot of experience playing 3A teams. We didn’t really know what to expect, but in 3A these teams are extremely fundamental,” she said. “We kind of bring some athleticism to it, so it’s a little bit different look than a lot of 3A teams. We’re trying to get the fundamental part down too, but a lot of times our athleticism is what helps us through these games.”

So, can Fairfield repeat? It’ll first need to get past Bishop (28-1) on Saturday in Houston to sew up a spot in the 3A final next week at the Alamodome in San Antonio. Normally, that’s where these semifinal games would be, too, but in the age of COVID much has changed.

Still, Whitaker has tried to steadily remind her team that getting here is still a very big deal.

“We had an interesting conversation after our regional final win (over Lexington) last night,” Whitaker said. “We get in the locker room and it just kind of seemed like a normal game atmosphere, instead of the fact that we just made it to what should be the state tournament. Just had to remind them that this is a big deal. This isn’t normal.

“It’s great to be the expectation, but this is still a major accomplishment and they should be proud of themselves. The community is behind them, and it’s just a really special time for this community and this school.”

It’s been quite a coaching career for Bobby Cervenka — and he’s not done yet.

Last week at the Whitney Tournament, the Moody head softball coach reached an impressive milestone when he picked up his 500th career victory. The achievement accompanied the Lady Bearcats’ 16-5 triumph over Lubbock Trinity.

Cervenka has spent the past 21 years as a high school softball coach. He moved to Moody in the summer of 2019 after previous stops at Robinson, Troy and Groesbeck. At Robinson, Cervenka led the Rockets to a Class 3A state tournament appearance in 2010, while at Troy he won a Class 2A state championship in 2007.

Shoppach is taking an administrative job within West ISD. He oversaw a breakthrough in his two seasons at Bruceville-Eddy, leading the Eagles to a 12-8 record. In his first season in 2019, the Eagles went 9-2 and won their first district championship since 1985, breaking Central Texas’ longest postseason drought.

Prior to coming to Bruceville-Eddy, Shoppach was most recently an assistant coach at Robinson. He also had previous coaching stops at McGregor and Mart.

Nominations should include a player’s position, classification, height, statistics, and awards or honors. They may be sent to Brice Cherry at bcherry@wacotrib.com.

The teams will publish sometime after the state tournaments.

Midway softball coach Jordan Williams said she can see her team getting better as the playoffs approach.

When the wind blew in and scrambled the Class 6A Region 2 boys’ golf tournament, Midway junior Brayden Bare held steady.

One of the beautiful things about next month’s UIL State Track and Field Championships is that it’ll involve nothing but finals. Every race, e…

Lorena’s Graham Goolsby and the Leopards have made school history with their first-ever basketball trip to the regional semifinals.

Breyunna Dowell (right) has again been a major contributor in the Fairfield Lady Eagles’ return to the state tournament.