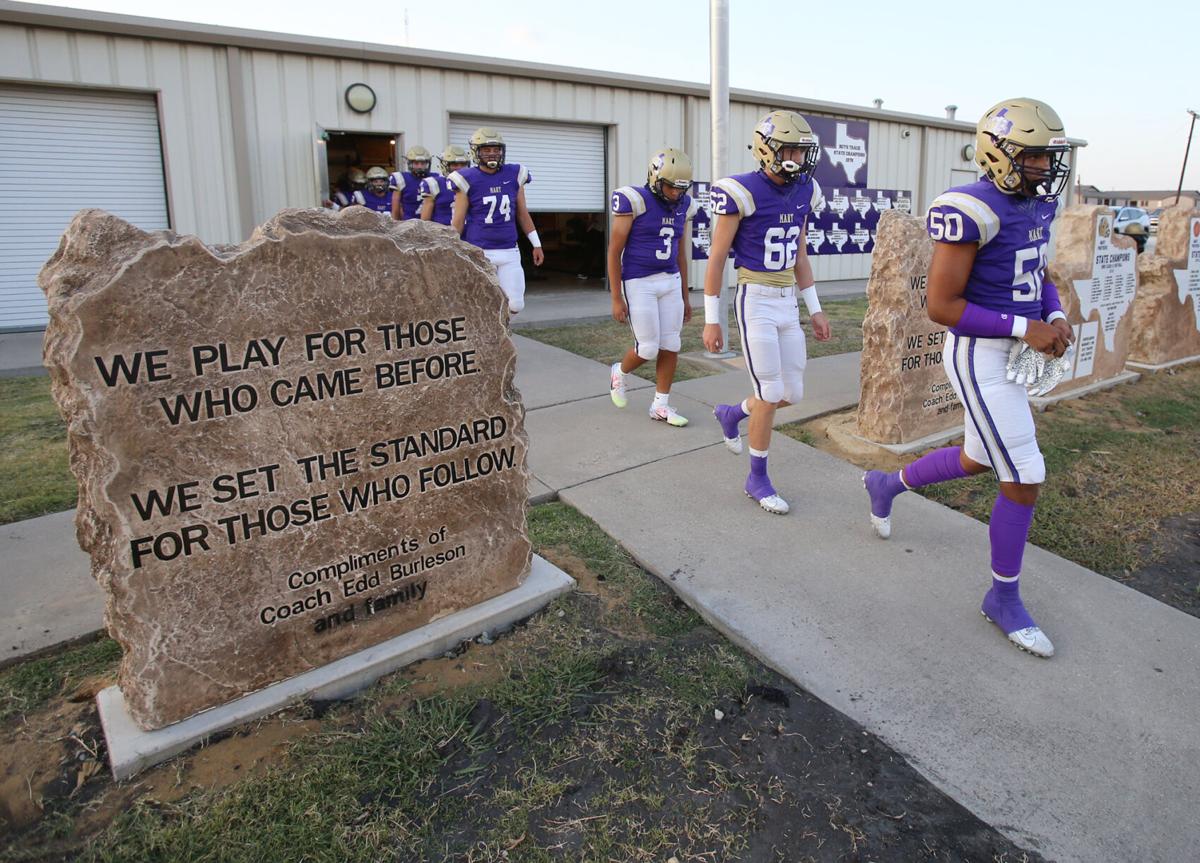 According to the Tribune-Herald records, Mart could reach career win No. 800 this week, while other football historians around the state have the Panthers with 780 all-time wins. 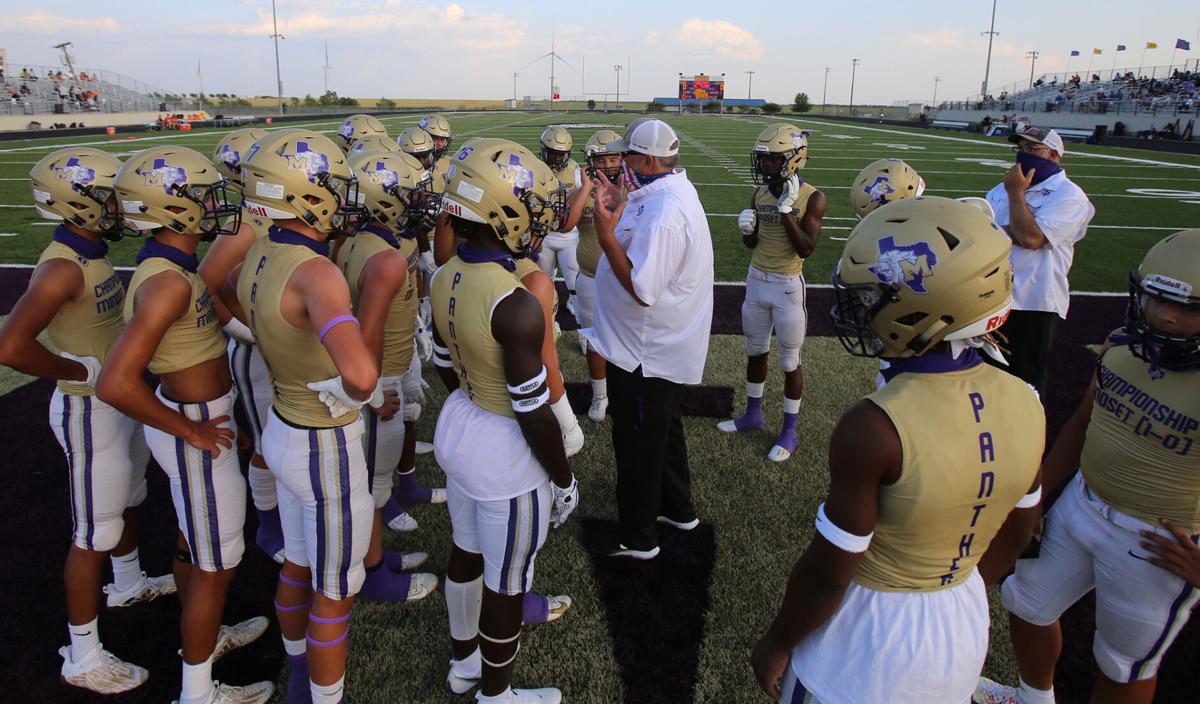 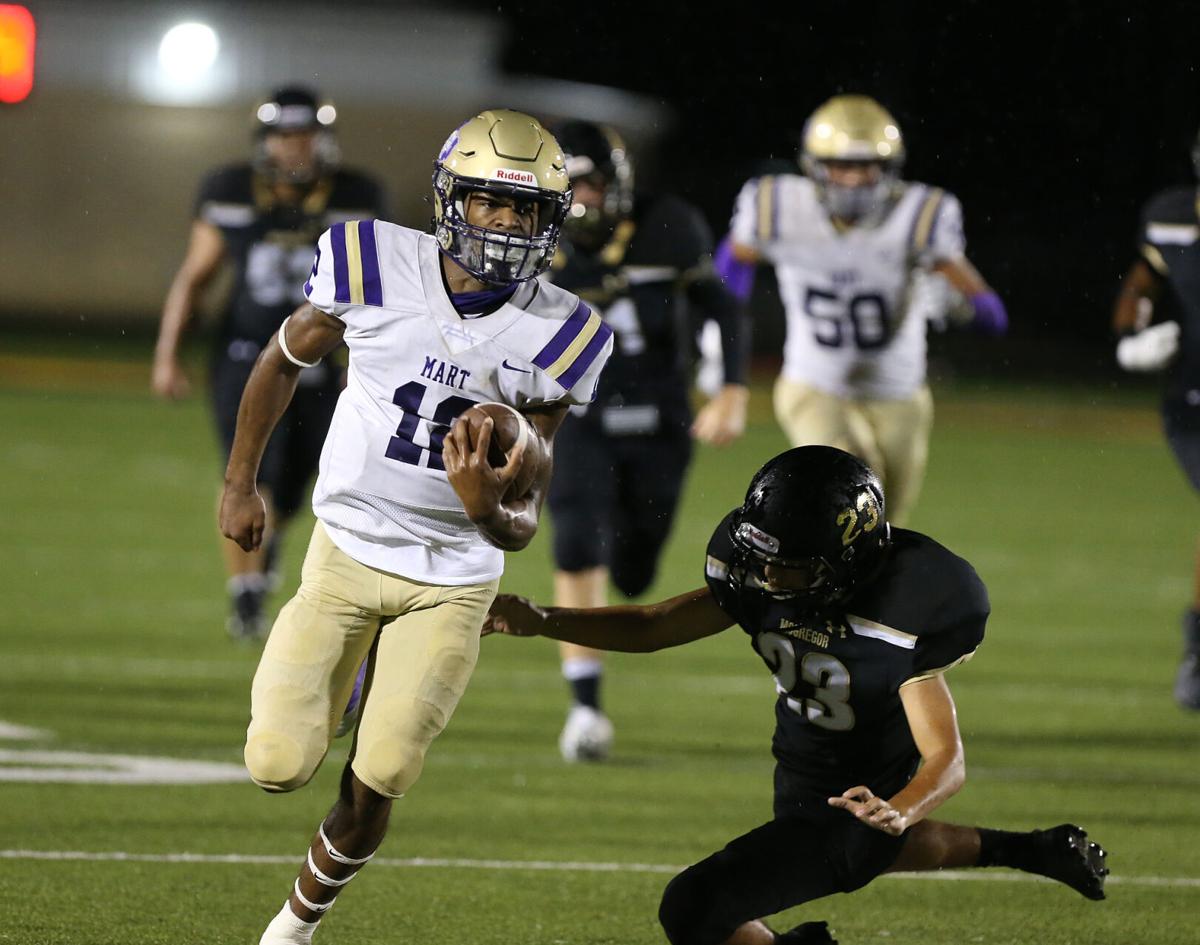 Keishawn Clater returns a kick against McGregor earlier this season. Clater scored on the play.

There are certain things that define Mart football with very precise numbers.

Most notably, the Panthers have won eight state championships with the first one coming in 1957 and the last three rolling in during the past three consecutive seasons.

Also, no matter who you ask, Mart is in the top three in the state in all-time wins. The group at the top includes Highland Park, Amarillo and Temple, which makes Mart the winningest small-town powerhouse in Texas.

But Mart’s specific number of all-time victories has stirred up debate over the years. An attempt to dive into the theories this week brought to light a mysterious person who convinced former Trib sportswriter Mickey Humphrey of one figure, multiple chronicles of the Panthers, an inquisitive junior high student and a gym fire that may have destroyed the most reliable records.

According to the school, Mart’s state championship victory over Hamlin last December was win No. 777. That makes for a fitting narrative as the Panthers hit the jackpot at AT&T Stadium to win their eighth state title.

That’s also the number Dave Campbell’s Texas Football published this year, but for a long time, that figure was one off the record kept by Texas high school football historians Joe Lee Smith and Jerry Forrest, publisher of pigskinprep.com.

Then in May of last year, Smith went back into the archives and unearthed an extra win from 1915, so now the historians, Texas Football and the school agree that, with the Panthers’ victory over Anahuac on Saturday, they sit at 780 all-time wins.

But there’s just one hard-to-solve problem — the fastidiousness of the late Humphrey.

A Trib sportswriter from 1980 until his death in 1999, Humphrey specialized in high school sports and had a reputation as a diligent statistician. While he was working for former Trib sports editor Dave Campbell and alongside fellow sports reporter David G. Campbell in the 1990s, Humphrey came upon information that has defined the Trib’s record on Mart since then.

David G. Campbell said on Tuesday that he can’t remember exactly who gave Humphrey the information, but it put the Panthers win total 20 victories higher than other figures.

“It was his call,” Campbell said. “I remember thinking, ‘That makes sense to me.’ Mickey would not have just accepted numbers. He was meticulous.”

So for the past 20-plus years, the Trib has published Mart’s all-time record according to the numbers that Humphrey credited. By that total, the Panthers’ current all-time record is 799-337-39 dating back to 1912. Therefore, Mart trails only Highland Park (843) for most program wins.

However, Forrest, who is a former Super Centex kicker as a player at Mart, would like to see more proof before accepting the Trib’s total. And he’s been studying it for a long time.

Forrest said on Tuesday that he started studying Panthers football history when he was in the eighth grade in the mid-1980s. Former Mart Herald editor John Selman sent him digging into the program’s history. One problem that presented itself, though, was that apparently a fire destroyed the school’s gym and may have wiped out the most accurate records.

That has left Smith and Forrest searching through newspaper microfilm to come up with the answer. That’s how they got to the 780 figure, which means Mart has a chance to reach win No. 800 by their count sometime next season.

Amarillo High will begin the 2020 season later this month with 792 all-time victories. That ranks No. 2 by the Smith-Forrest figure. But either way, Mart is fast on the heels of the Sandies. Less than three years ago, the Sandies had a 25-win lead on the Panthers and that number has been cut in half in that short time.

Since he started keeping track, Forrest has seen Mart do some amazing things on top of winning six state championships. Last season, by his count, the Panthers edged in front of Temple, which currently sits at 774 wins according to Texas Football.

The list of football schedule alterations for this week grew on Wednesday as Cameron Yoe’s game versus Lexington and Hamilton’s game versus Bangs were canceled.

Cameron Yoe put out a statement saying, in part “Due to conditions related to COVID-19 and in an effort to ensure the health and safety of our student-athletes, The C.H. Yoe varsity football team will not be participating in its game this Friday, September 18 against Lexington.” The statement, which appeared on Twitter under the @YoeFootball handle, went on to say that junior varsity and freshmen games against Lake Belton will be played as scheduled because those athletes don’t share a locker room with the varsity.

Hamilton ISD’s Twitter feed stated that “All football games against Bangs are canceled this week. We look forward to starting district play next week against Itasca.”

On Monday, the Lampasas at China Spring game was canceled due to a COVID-19 case on the China Spring varsity. The Cougars administration said one varsity player had tested positive and others had been quarantined due to exposure.

Meanwhile, the Lorena, Gatesville, Itasca and Evant football teams are planning to return to play.

Lorena hosts Madisonville in varsity action on Friday. The Leopards’ previous varsity game against Gatesville was canceled only hours before kickoff last week when Lorena learned of a positive COVID-19 case on its team. The student-athlete in question had been quarantined from early in the week and no residual problems have occurred to cause this week’s game to be called off. Gatesville is set to host Hillsboro.

The Itasca Wampus Cats are set to return to the field with their homecoming game against Ranger on Friday. Itasca’s road game at Santo was canceled last week due to COVID-19 precautions. Evant is also scheduled to return to action on Friday after canceling all varsity volleyball and football games since Sept. 3.

Players of the Week

Bruceville-Eddy quarterback Trapper Ensor edged out teammate Pablo Rubio to win the WacoTrib.com Offensive Player of the Week honor this week. Ensor passed for 231 yards, rushed for 44 and accounted for three touchdowns in the Eagles’ 35-21 victory over Florence on Friday.

Ensor picked up 427 votes to finish 120 ahead of Rubio in second place. Rubio had 193 combined rushing and receiving yards in the Bruceville-Eddy win.

West defensive end Jaden Anderson won a close vote for Defensive Player of the Week. Anderson had eight tackles, including a pair of sacks and five total tackles for losses in the Trojans’ 28-7 victory over Blooming Grove.

The Player of the Week poll is made up entries in the weekly Honor Roll. Coaches can nominate players for the Honor Roll each week by emailing Trib sportswriter Chad Conine at chad.conine@wacotrib.com. Nominees must be received by 3 p.m. on Saturday.

Wins have been plentiful for China Spring’s volleyball team this season. On Tuesday, the Lady Cougars picked up their first win over a Class 6A foe.

China Spring went on the road and came away with a three-set sweep of Temple to improve to 14-0 on the season. Monday marked the first opportunity for schools in 6A and 5A, like Temple, Midway and others, to open up their seasons.

China Spring’s sterling record thus far has pushed it to No. 3 in the Class 4A state rankings, as determined by the Texas Girls Coaches Association. The Lady Cougars will get another crack at taking down a 6A opponent when they play Copperas Cove at home on Friday.

Elsewhere in the state volleyball poll, Crawford (12-2) remains No. 3 in Class 2A as the Lady Pirates push for a second straight state championship. Bremond sits at No. 13, Blum is 14th and Abbott is 20th in the 2A rankings. (Schools in Class 2A and 1A are combined in the regular-season rankings, before splitting up for the playoffs.)

District rivals Troy and Lorena are ranked 21st and 22nd, respectively, in Class 3A. The Lady Leopards took the first meeting between the rivals last week.

The Trib's Chad Conine and Brice Cherry recall some of their favorite football players from their teenage years and break down the rivalry between No. 2 La Vega and No. 1 Argyle. Check out the weekly podcast on WacoTrib.com.

According to the Tribune-Herald records, Mart could reach career win No. 800 this week, while other football historians around the state have the Panthers with 780 all-time wins.

Keishawn Clater returns a kick against McGregor earlier this season. Clater scored on the play.