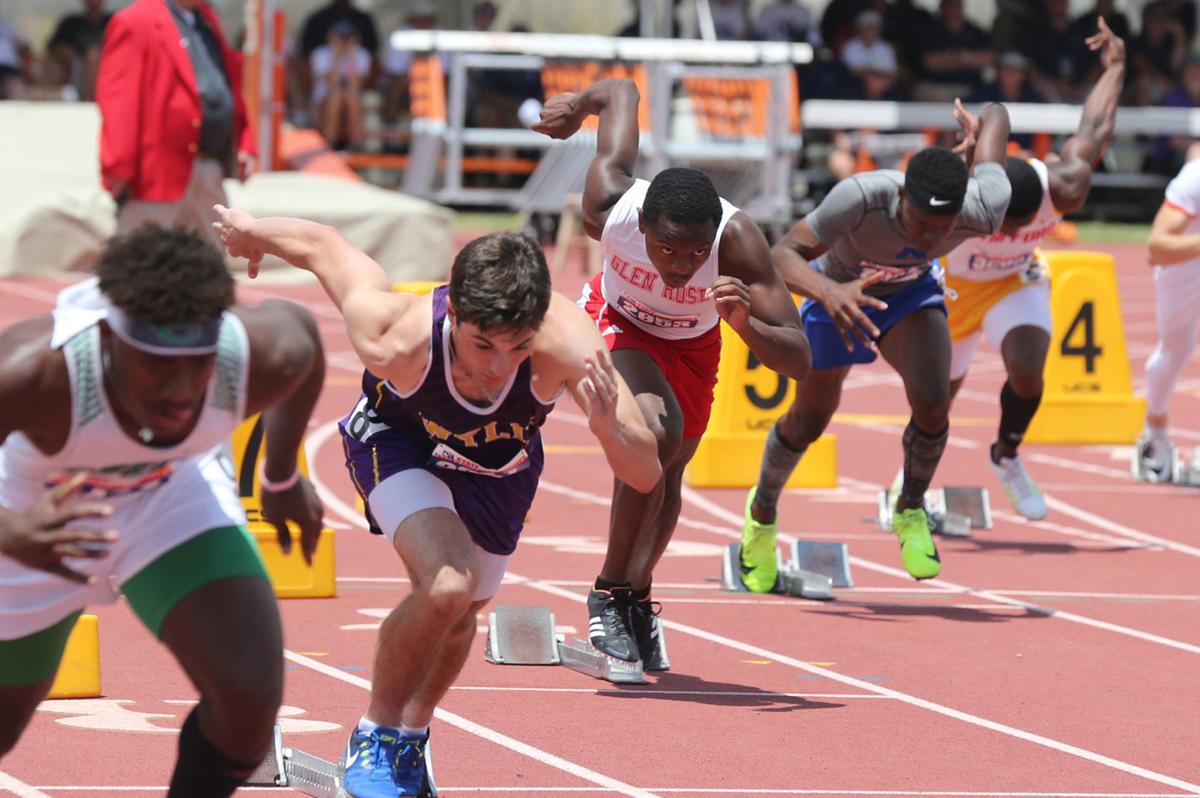 Sprinters race out of the blocks at the UIL State Track and Field Meet in Austin in 2019. Regional UIL meets will take place Friday and Saturday around the state. 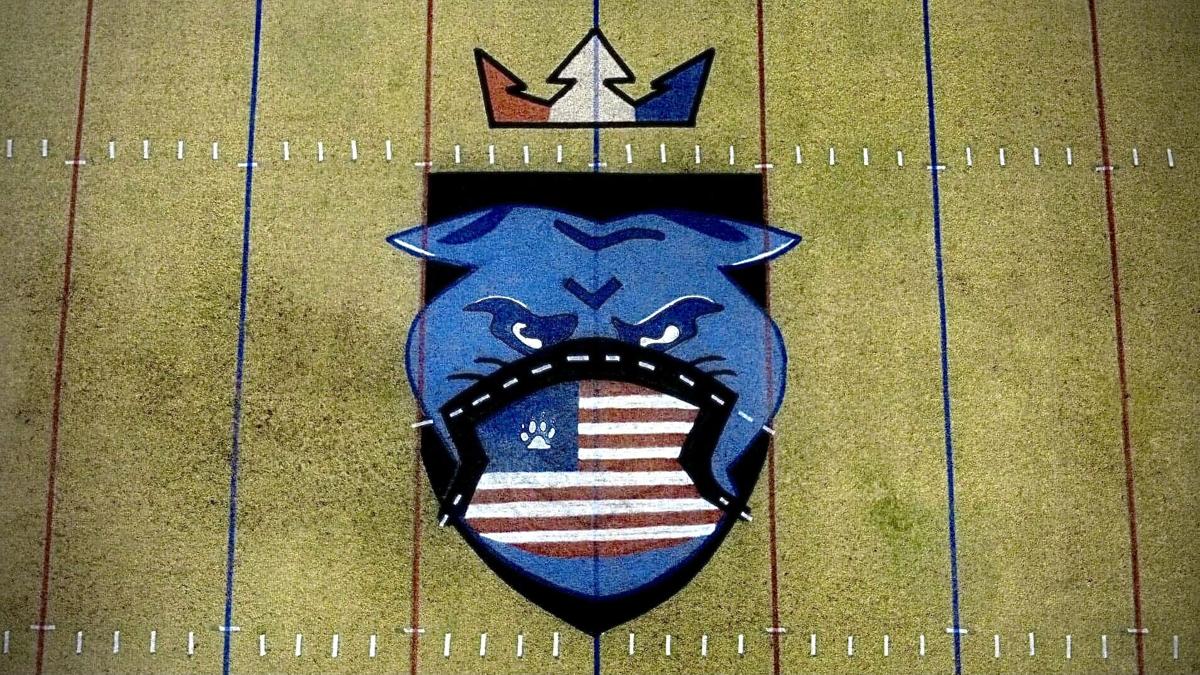 Bishop Reicher has again won a Field of Excellence Award from Pioneer Athletics for its creative football field designs.

One of the beautiful things about next month’s UIL State Track and Field Championships is that it’ll involve nothing but finals. Every race, every competition, as always, determines a state champion.

As for the prelims, those are, for all intents and purposes, taking place this weekend.

All over the state, the UIL’s regional meets will unfold on Friday and Saturday. They’re the precursor to state, and just as intense. Only the top two finishers in each event at the four regionals will advance on to state.

Just how elite is the competition? Well, put it this way: Even those who follow national track and field know that in Texas the regional meets are as good or better than most other state meets.

“It’s unreal, because they literally only take two regional qualifiers on to state,” said Tom Hill, meet director for the Region III-3A and Region II-6A meets that will take place at Midway this weekend. “We’ve had times that were in the top six at regionals that would have been state medalists elsewhere. … Every year, Track and Field News calls me to make sure we have wind gauges for the field events and the running straightaways, just in case any national records are set.”

Wind or no wind, Midway’s Panther Stadium will be buzzing this weekend. The Region II-6A meet features plenty of rich competition, as it spans an area from Dallas (with the likes of Garland, Mesquite and Duncanville) down to Houston (with The Woodlands, Klein and Cypress-area schools). Of course, Region II-6A also incorporates Districts 11 and 12, including Central Texas teams like Midway, Waco High, Belton and Temple.

It’s an especially busy time for Hill, who also helped organize and host the Region II-6A golf tournaments in Waco this week at Bear Ridge. Next week will bring regional tennis action to town, and then Midway will host the TAPPS State Track and Field Championships on April 30-May 1.

“It’s like the old days, even with all the new hotels,” Hill said. “I had some officials call me two days ago, and I had to put them down in Temple.”

The Region III-3A meet should feature loads of lively local competition. Lorena’s boys and girls swept the team titles at the District 17-18 Area Meet, so the Leopards figure to be a strong candidate to send plenty of athletes on to Austin. But lots of other Central Texas athletes will take part, from schools like McGregor, Clifton, Riesel, Troy, West and Whitney.

The Whitney and Lorena boys golf teams are state-bound after finishing second and third, respectively, at the Region III-3A tournament at Brenham Country Club in Brenham.

Lorena carded rounds of 360 and 359 for a 719 total to punch its ticket to state. The Leopards were led by John Mann, who shot consecutive rounds of 79 for a 158 total and a fourth-place finish overall. Ethan Norwood (78-89-167) also notched a Top 10 finish for Lorena in eighth. But Lorena coach Ken Thompson said that a big key to the Leopards’ advancing was the play of David Boozer, who shaved 11 strokes off his first-round score with a second-round 98. Lorena clinched third by just eight strokes over Nacogdoches Central Heights.

Those state qualifiers will next compete at the UIL Class 3A state tournament May 17-18 at ShadowGlen Golf Club in Manor.

Midway senior Eubin Shim grabbed the individual lead as she opened the RegionII-6A girls’ golf tournament with a round of 2-under-par 70 on Wednesday at Bear Ridge Golf Club.

Shim, who has signed to play college golf at Boston College, has a three-stroke lead on Copperas Cove senior Elle Fox and Tomball senior Sofia Trevino in a tie for second place.

The Woodlands, who won the boys’ regional team title in a playoff against Midway on Tuesday, shot 22-over 310 to stake a 15-stroke lead in the girls’ team standings.

The Region II-6A tournament will finish with the second round on Thursday, back at Bear Ridge.

Featherston replaces Sam Moody at Valley Mills. Moody went 9-22 in three seasons piloting the Eagles, with one playoff appearance in 2018. Valley Mills is coming off a 4-6 season in 2020 that included a pair of forfeit wins over Itasca and Crawford.

Young-Malcolm spurred the Lady Bears to their first NCAA title in 2005 before going on to a successful WNBA career with the San Antonio Silver Stars. She will be inducted into the Texas Sports Hall of Fame in August.

Sunday’s banquet is scheduled for 5 p.m. at Baylor’s McLane Stadium. The event will showcase the players, cheerleaders and coaches for this summer’s games.

The seventh annual Victory Bowl baseball and softball all-star games will be June 11 at Mary Hardin-Baylor in Belton. Midway joins as a new host for the ninth annual volleyball contest and the 14th annual football game on June 12.

Nobody in Central Texas puts a better product on the field than Bishop Reicher.

Once again, Reicher won a Fields of Excellence Award from Pioneer Athletics for its outstanding field crew work at JJ Kearns Stadium. A group of Reicher dads volunteer to decorate the field in creative designs, including a large blue Cougar wearing a COVID-approved mask.

As an award winner, Bishop Reicher receives a certificate and a banner, and Pioneer may feature the school in its upcoming publications or calendars. Pioneer awarded 73 Field of Excellence honors to high schools and colleges around the country, with two randomly chosen to receive scholarships.

AUSTIN — Central Texas track fans saw a lot of purple and gold cross the finish line on the second day of the UIL Track and Field Championships.

Super Centex Girls Soccer Team: When your team’s most talented player also doubles as one of the hardest workers, that rubs off on everyone else — in the best way possible.

Another playoff game, another ho-hum win for the Midway Pantherettes.

Though just a single game of many in the illustrious prep career of David Warren, one memorable day at Texas Stadium is one that he and lovers…

Sprinters race out of the blocks at the UIL State Track and Field Meet in Austin in 2019. Regional UIL meets will take place Friday and Saturday around the state.

Bishop Reicher has again won a Field of Excellence Award from Pioneer Athletics for its creative football field designs.