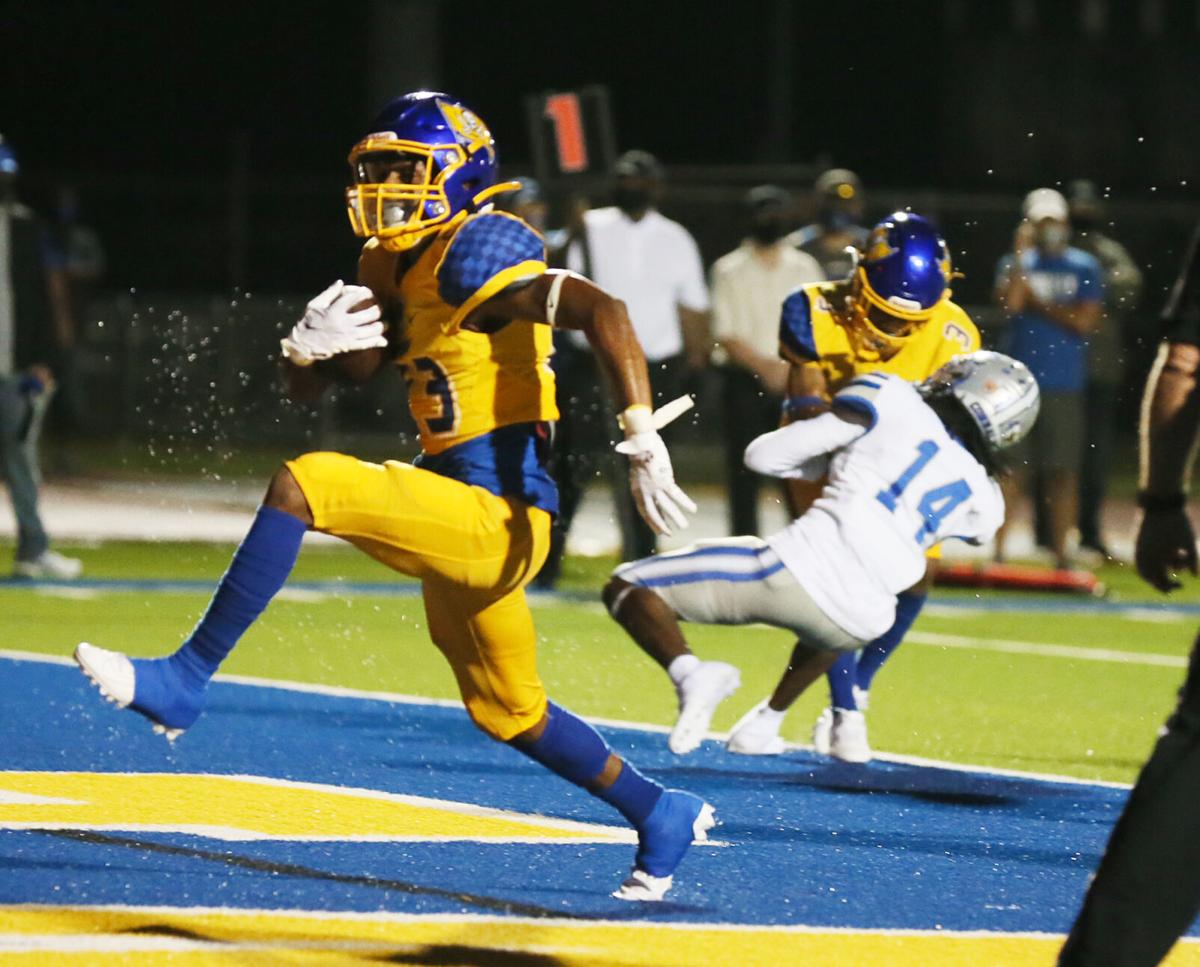 La Vega running back Jesse Majors-Sterling high-steps into the end zone at the end of his first-half touchdown run that tied the game at 7 with Connally. 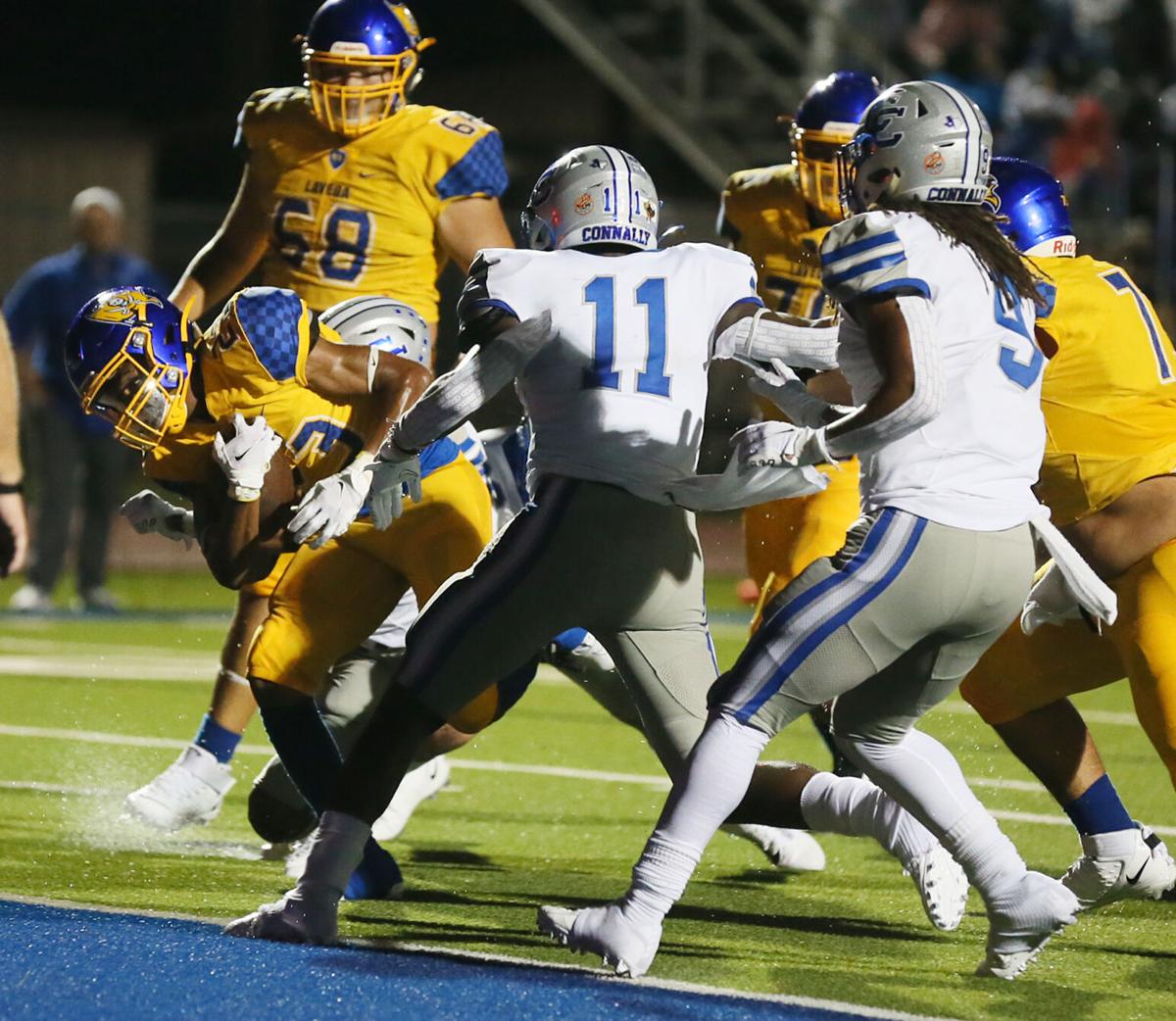 La Vega's Jesee Majors-Sterling (left) scored the first touchdown of the night for the Pirates, past Connally's LaMarcus McDonald, finishing with 62 yards on 10 attempts. 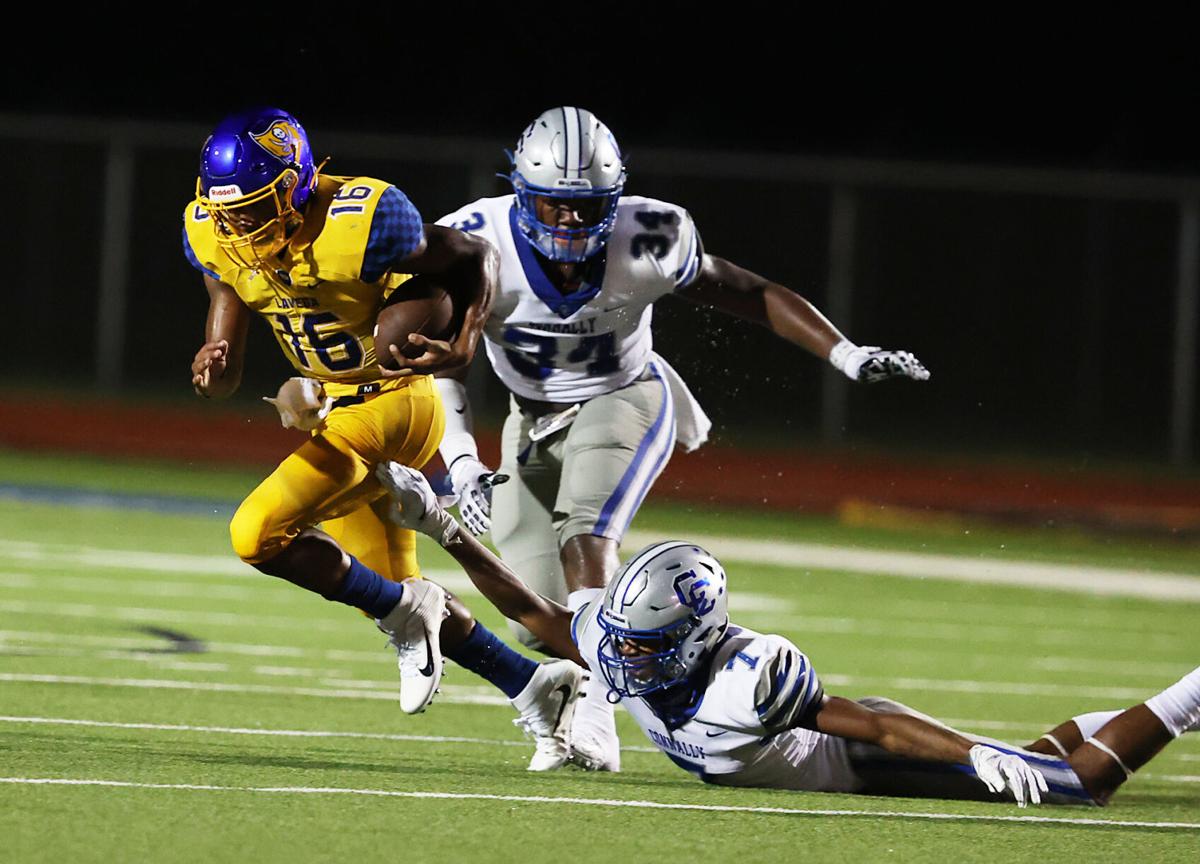 The La Vega Pirates and Connally Cadets lined up for what figured to be a smash-mouth football game on prime-time local television.

And that’s what they delivered.

La Vega linebacker La’Travius Johnson put a grown-up hit on Connally running back Kavian Gaither on the game’s decisive play that allowed the Pirates to hold on to a 13-10 victory on Friday night at Willie Williams Stadium.

With that, La Vega, the top-ranked team in Class 4A Division I, claimed a win against rival Connally, the No. 7 team in 4A D-II.

Since capturing its first state championship in 2015, La Vega has put together a record that would be the envy of any team in the state.

Connally trailed by three points in the fourth quarter when the Cadets marched from their own 8-yard line to the La Vega 32. On a fourth-and-four from there, Gaither took the snap in the Wildcat formation and looked for running room.

Johnson met him and stuffed him for a minimal gain and the Pirates took over possession with 2:39 remaining.

That was the final big defensive play on an evening full of them.

Fittingly, the key offensive play of the second half was also defined by a big hit.

Pirates running back Jar’Quae Walton took a handoff on third-and-goal from the Cadets’ 2 early in the third quarter. Walton bounced the run outside, found running room to get to the goal line, then lowered his shoulder and drove Connally’s Tre Wisner backward to enter the end zone.

Walton rushed for 154 yards on 28 carries and Jesse Majors-Sterling pitched in 62 yards on 10 attempts, including the Pirates’ first touchdown. Those two had to carry the entire load in the second half after La Vega starting quarterback Ara Rauls left the contest with an apparent left-arm injury.

A Cadets defensive play made the difference through the first two quarters.

Midway through the second quarter, Connally D-lineman Torii Pullen jumped up and grabbed a Rauls pass near the line of scrimmage at the La Vega 30. Pullen rumbled inside the Pirates’ 10 before he was tackled by Walton.

But a Connally penalty to start the drive pushed the ball outside the 10 and the La Vega defense held the Cadets there. Connally kicker Ralph Morales booted a 28-yard field goal to put Connally in front, 10-7.

The Cadets took that lead to intermission. But Walton’s tackle of Pullen on the interception proved huge at the end of the night.

After a storm blew in and delayed kickoff for more than 15 minutes, Gaither started the in-game fireworks on Connally’s second possession.

On first down from his own 32, Gaither found a seam on the right side and burst into the Pirates secondary. La Vega’s defense couldn’t catch up as Gaither sprinted 68 yards for a TD and the initial 7-0 lead.

Connally’s Kavian Gaither has played all over the field throughout his football career, so he didn’t wince when he was asked to move from quar…

La Vega answered on its ensuing possession with Walton toting the rock to great effect. He carried on eight of nine plays and moved the ball from the Pirates’ 39 to the Connally 19.

Majors-Sterling took over to finish the drive as he ducked through the big guys on the line on a six-yard touchdown run that tied it at 7 with 2:29 left in the first quarter.

Penalties kept both teams from establishing more momentum and they went to the halftime locker room separated by a mere three points.

La Vega (2-0) continues its season next week with a neutral site game versus Corpus Christi Calallen, while Connally (1-1) will host Springtown.

The Heart of Texas Fellowship of Christian Athletes announced the coaches for its annual Victory Bowl games on Sunday.

Waco ISD should have two new football coaches before the end of this month.

Certain teams just seem to always have your number. For years, that’s the way it’s been for the Waco High girls basketball team whenever it en…

The Texas Six-Man Football Coaches Association has announced its all-state and all-region teams for 2020, and several Central Texas players pi…

China Spring’s boys basketball season is on pause, as the Cougars are in quarantine due to a positive COVID-19 case.

One necessary characteristic a coach must possess is clock awareness. It’s especially true in late-game situations — knowing when to use your …

La Vega running back Jesse Majors-Sterling high-steps into the end zone at the end of his first-half touchdown run that tied the game at 7 with Connally.

La Vega's Jesee Majors-Sterling (left) scored the first touchdown of the night for the Pirates, past Connally's LaMarcus McDonald, finishing with 62 yards on 10 attempts. 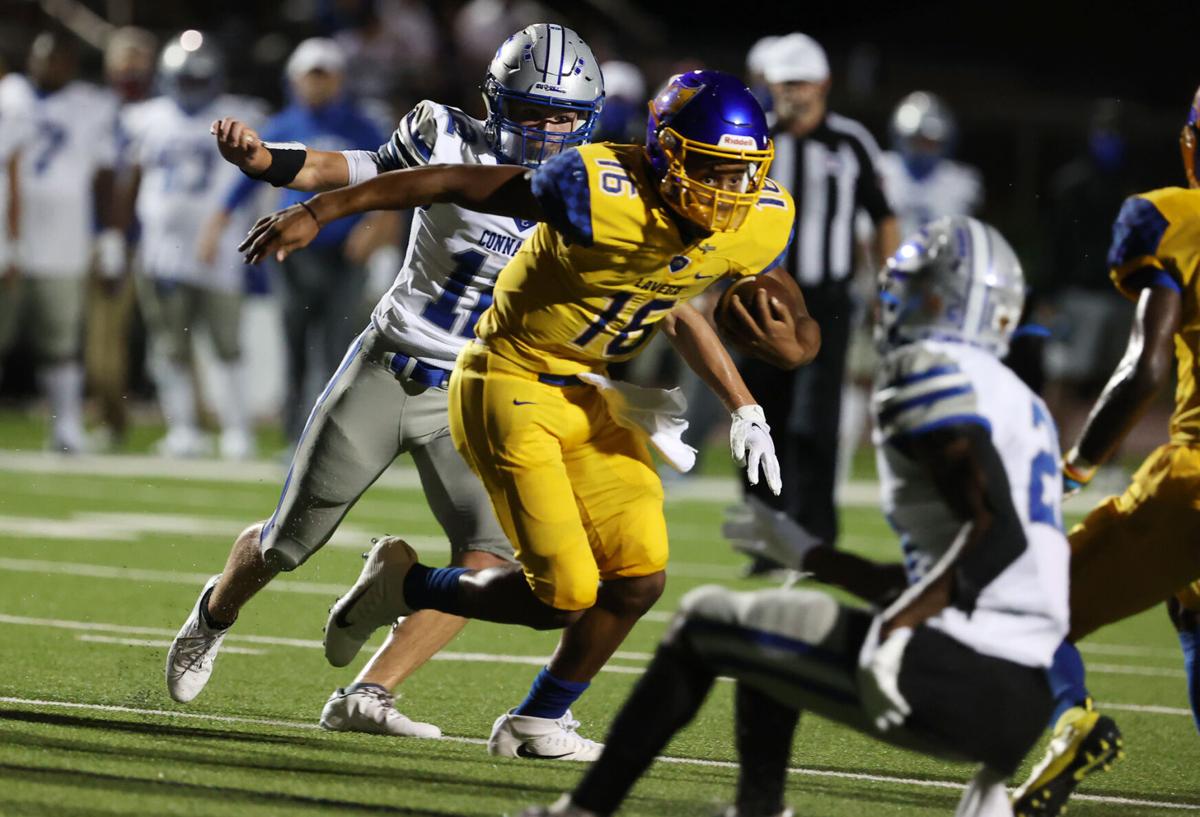 La Vega's Ara Rauls III looks for an opening while being chased by Connally's LaMarcus McDonald (left) in the first half. 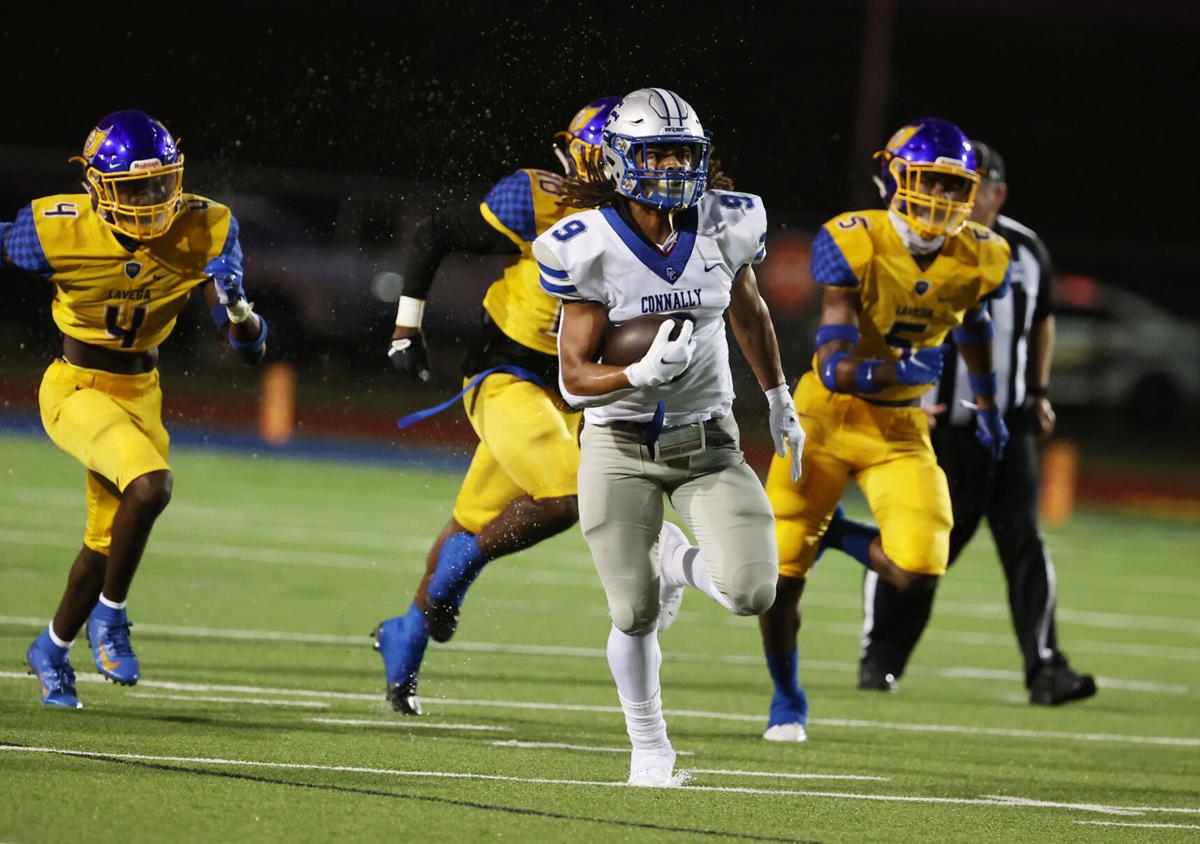 Connally star Kavian Gaither outruns the the La Vega defense for a 68-yard touchdown to give the Cadets the lead. Gaither finished with 147 rushing yards on 24 carries. 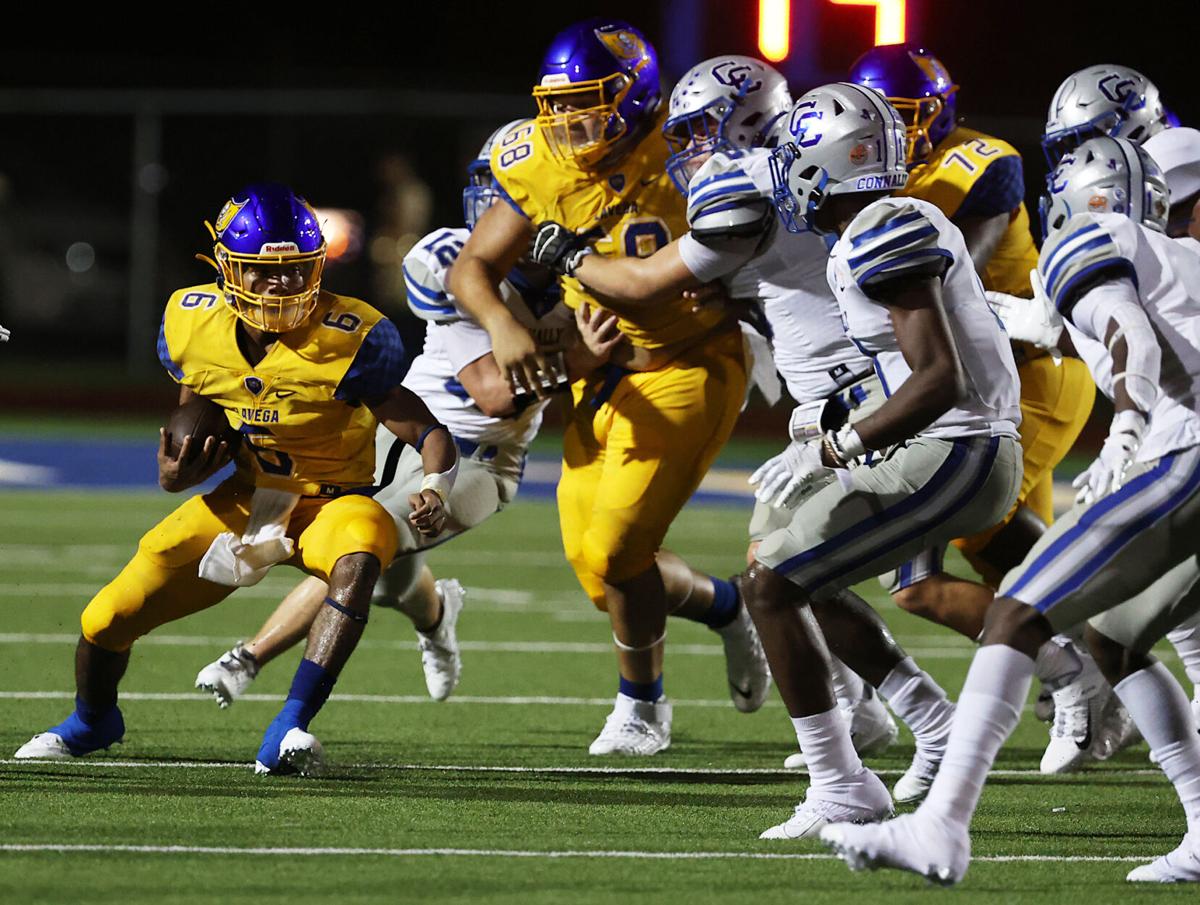 La Vega's Jar'Quae Walton (left) cuts back against the Connally defensive pressure in the first half.