The La Vega boys’ track and field team has had a galaxy of stars in the past few seasons as the Pirates won the Class 4A team state championships in 2019 and 2021.

It took a global pandemic to keep La Vega from more than likely notching another title in 2020.

But even among La Vega’s constellation, Pirate senior Jesse Majors-Sterling stands out.

Big smiles, outgoing personality and faster than a shooting star.

“It feels like it was just yesterday, too,” Majors-Sterling said earlier this week as he and his teammates warmed up for practice. “It was an amazing experience going my freshman year and to win a state championship it set the boundary for everything.”

Last year, Majors-Sterling anchored the mile relay as well and the Pirates swept the 4x100, 4x200 and 4x400 for the second-straight state meet and won another championship.

The crazy thing is that La Vega’s best team, the 2020 squad (ask anyone in the program), never got a chance to show what it could do. Pirates first-year head coach Jermaine Carpenter, who took over earlier this year when former coach Chris Ward became a principal at the high school, remembers being awed at La Vega’s speed early in 2020.

By winning the 4A team crown a year ago, La Vega eased the pain of the lost year, at least a little bit.

Now the Pirates have a chance to elevate their track and field legacy into the stratosphere.

La Vega once again has three relays qualified for the 4A state championships.

The 4x100 will be Nathaniel Washington, Nikzavyer Rice, Mekhi Rice and Majors-Sterling.

The 4x200 will be Washington, Stephon Nickerson, Mekhi Rice and Majors-Sterling.

And the mile relay will be Mekhi Rice, Nikzavyer Rice, Nickerson and Majors-Sterling.

Nikzavyer Rice, Nickerson and Majors-Sterling were all on the mile relay a year ago as the Pirates closed out the meet with a victory.

“We lean on those guys a lot just because of their experience and the number of track meets they’ve been a part of here at La Vega,” Carpenter said. “Jesse, obviously, being a freshman when we first won and he’s been the anchor on all three relays for the majority of the time, you lean on those guys a lot for their understanding of how to keep everybody calm.”

Nickerson, a junior, admitted he was pretty nervous when he stepped on the track at state for the first time a year ago. But now he’s one of the savvy veterans.

His key is to take each day the same.

“We’re not worried about May 12 or any other day,” Nickerson said. “We’re just working on the day that we’re running. Coach Carp calls it the ‘R’ (for region), the ’S’ (for state), he says to focus on the meet that day.”

A glance at the heat sheets for Thursday shows La Vega has the No. 9 lane assignment for the 4x100, and Lane 6 in the 4x200 and 4x400. Nikzavyer Rice is also entered in the 400-meter dash. The Pirates don’t have the fastest qualifying time in any of their events, so it might be a steep challenge to win a third consecutive state championship.

“I don’t think it’s three-peat or bust,” Carpenter said. “I would say just go out there and compete. The biggest thing we’re trying to do is go out and compete and represent La Vega the best way we can, just go and show the work they’ve put in over the last three or four months. Let the cards fall where they fall.”

No guts, no glory: McGregor's Dixon bounces back for state 400 gold

AUSTIN — It’s been a painful few weeks for McGregor junior Darieus Dixon, but he fought through a finish on top. 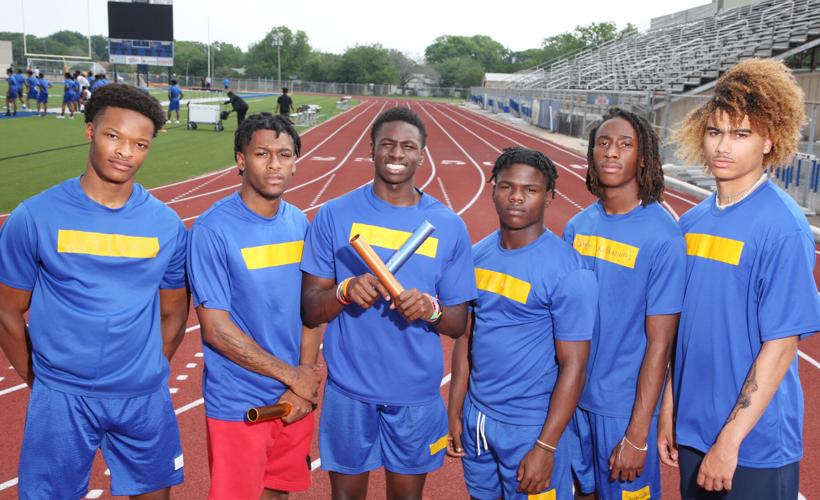 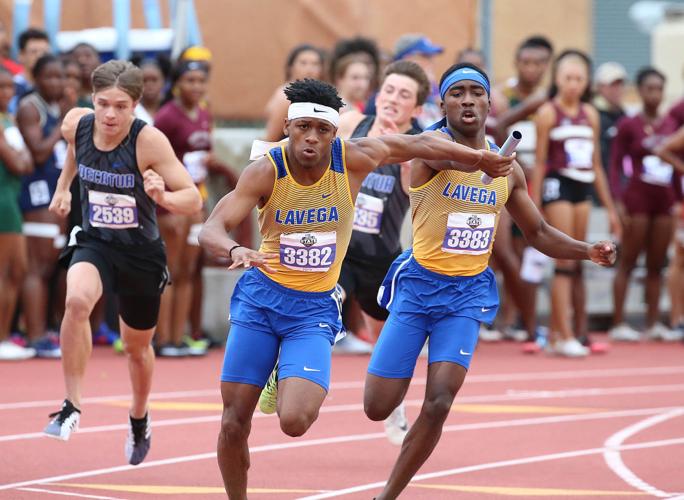 La Vega’s Quintaveon Mason hands off to Jesse Majors-Sterling for the final leg of the 4x100-meter relay at the 2019 state meet.