CORSICANA — If you want to go to battle in the trenches, the La Vega Pirates are ready for it.

Kaufman brought that kind of physical game against La Vega in a second-round playoff matchup in Class 4A Division I. The Lions hung in there, but they couldn’t bring down the ninth-ranked Pirates.

La Vega shut out Kaufman in the second half and freshman running back Bryson Roland scored on a 13-yard run to lift the Pirates to a 14-10 victory over the Lions on Friday night at Corsicana High School’s Tiger Stadium.

“This time of year, it doesn’t matter if it’s clean, if it’s ugly, a win is a win,” La Vega coach Don Hyde said. “That’s all you’re trying to do right now is win and advance. That’s what we did tonight.”

The Pirates (9-3) move on to the third round of the playoffs to face fourth-ranked Melissa, which defeated Midlothian-Heritage 50-41 on Friday night.

La Vega was trailing 10-7 midway through the third quarter when defensive lineman Javion Cooper recovered a Lion fumble at the Kaufman 45.

The Pirates’ moment of truth had arrived and they came through.

La Vega wide receiver Mekhi Rice took a reverse handoff on the first play of the new possession and ran 23 yards to the Kaufman 22.

The Pirates continued to pound the ball with their earth-moving running game. On the fourth play of the drive, Roland broke through and plowed into the end zone for the go-ahead touchdown with 3:46 left in the third quarter.

Because it's the playoffs, it figured La Vega was going to have to answer a challenge.

The Lions responded to falling behind with a 16-play drive that consumed more than eight minutes of the second half.

But the Pirates turned it away when senior cornerback Xavier Carpenter intercepted a pass by Kaufman QB Derek Clamon in the front, left corner of the end zone.

Kaufman didn’t cross midfield or gain a first down after that.

“They’re a good football team,” Hyde said. “We knew that coming in. They’re big up front, they’re physical. They do a good job of blocking. (Braxton Garmon) runs the ball hard and they can throw the ball. They put you in position where you have to play some man concepts and still bring some pressure. They’re a well coached team.”

Kaufman came up with three takeaways in the first half to gain a 10-7 lead at the end of the second quarter.

With the clock ticking under two minutes before intermission, Lions defensive back Kaleb Lewis stripped the ball loose from Roland’s grasp, then the Kaufman player grabbed the bouncing ball of the turf and returned it to La Vega’s 46.

Kaufman had 76 seconds to operate and picked up a first down before the Pirates’ defense stiffened at the 25. The Lions sent in Andres Gallegos to attempt a 45-yard field goal and he had the leg and line to make it.

That all but ended a first half when Kaufman more than successfully hung in the game with La Vega.

The Pirates were on the way to taking the initial lead when Roland, who has been a sensation at running back during the last six weeks, fumbled running inside the Lion 10. Kaufman’s Lewis recovered that one as well, stopping the Pirates’ drive.

Kaufman instead jumped on the scoreboard first at the beginning of the second quarter.

Lions defensive back Brayson Gomez picked off a Prescott pass and returned it to the La Vega 16 at the end of the first quarter.

After switching ends of the field, Garmon took a direct snap and ran three yards for a touchdown on the opening play of the second quarter.

The Pirates answered with a 10-play, 75-yard march for an equalizing touchdown. La Vega quarterback Robert Prescott threw a dart to Dontroy Sterling for an eight-yard touchdown that tied it with 7:27 to go before the bands marched.

The Kaufman defense seemed to prioritize stopping Roland in the first half and it worked. The La Vega freshman running back gained 61 yards on 12 carries, most of which came when he scampered for 44 on his first three totes of the night.

The Pirates couldn’t find much consistency when they looked for options other than Roland. They went to the break with 145 yards of total offense and contemplating the three turnovers.

“We don’t normally do that,” Hyde said. “We’ve been pretty sure-handed. If we can get them all out of the way tonight and still squeak out a win, I’m all for it.”

Class 1A Div. I: Abbott, Coolidge

Robinson High School has posted its head football coach job, indicating that the Rockets are moving on from Robert Rubel as their HFC, accordi…

Chad Conine: Crank the playoffs up to 11 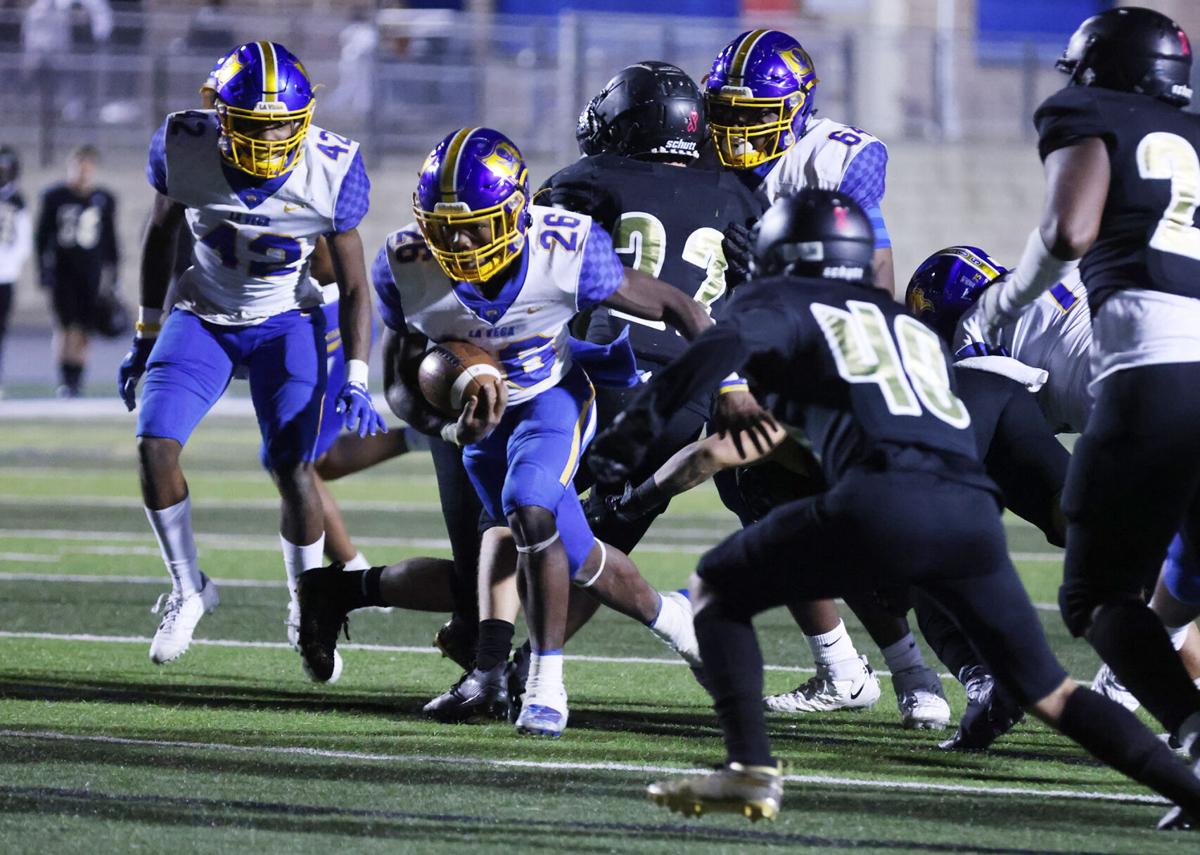 La Vega running back Bryson Roland speeds past Kaufman’s Kaleb Lewis for the go-ahead touchdown in the second half Friday night in Corsicana. The Pirates defeated the Lions, 14-10. 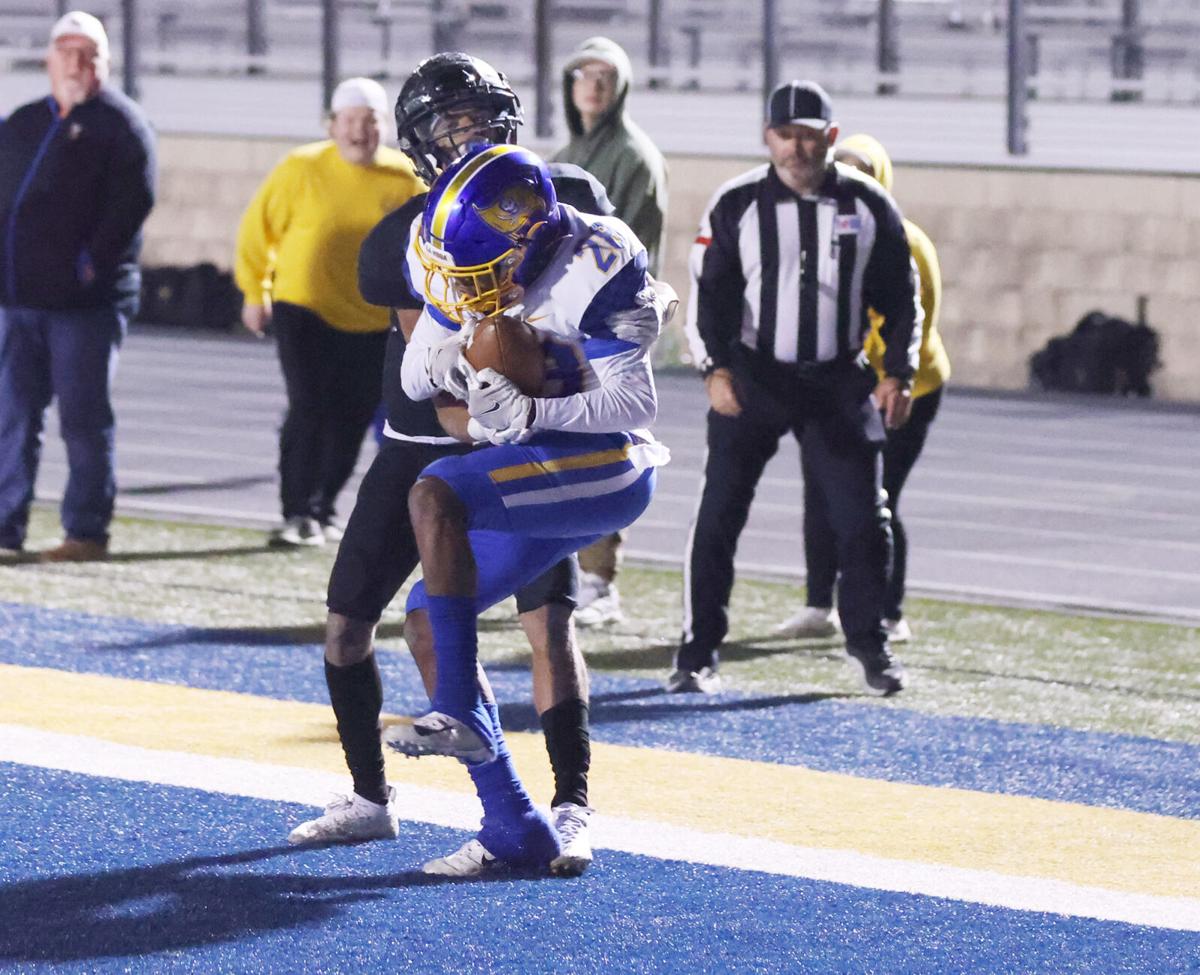 La Vega defensive back Xavier Carpenter comes up with a key fourth-quarter interception as he fights off Kaufman's Julian Prox. 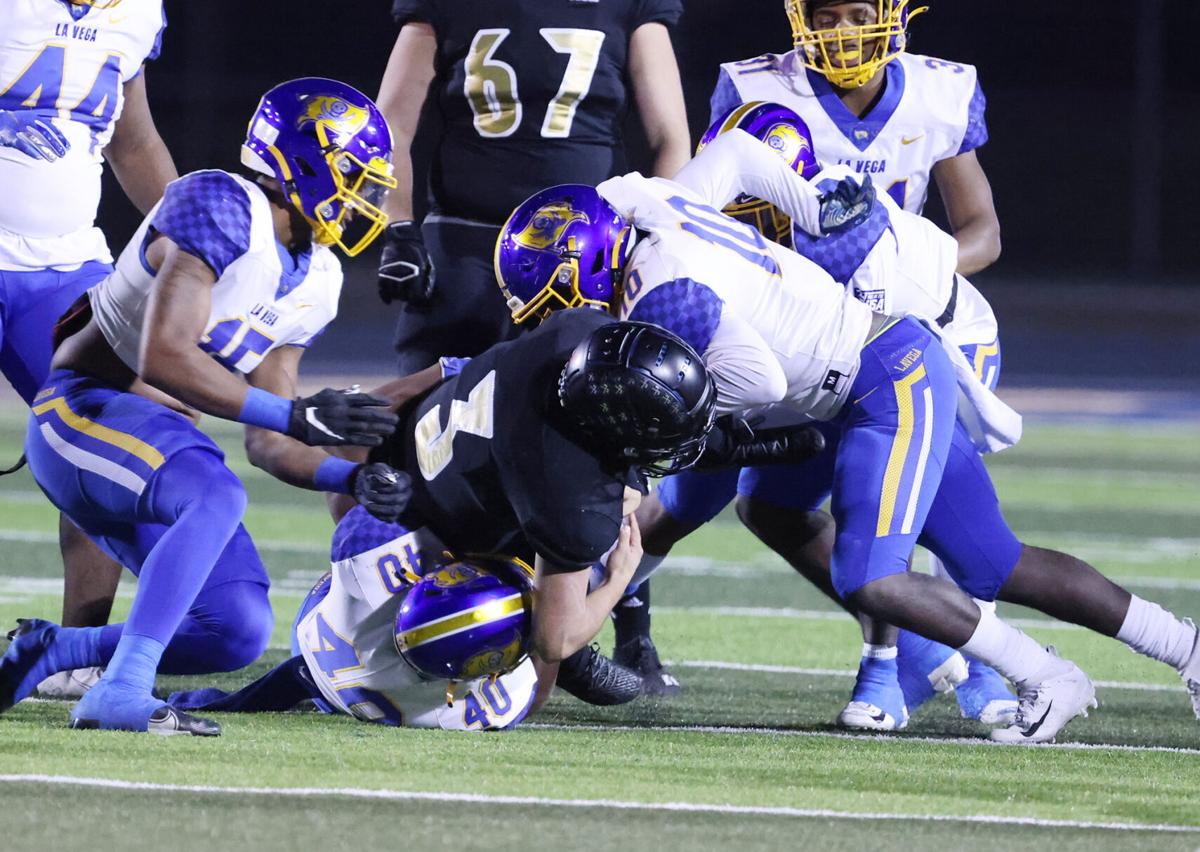 La Vega's Jasen Brown (right), along with Keywan Ross (center) and Darion White (left) bring down Kaufman's Derek Clamon in the first half. 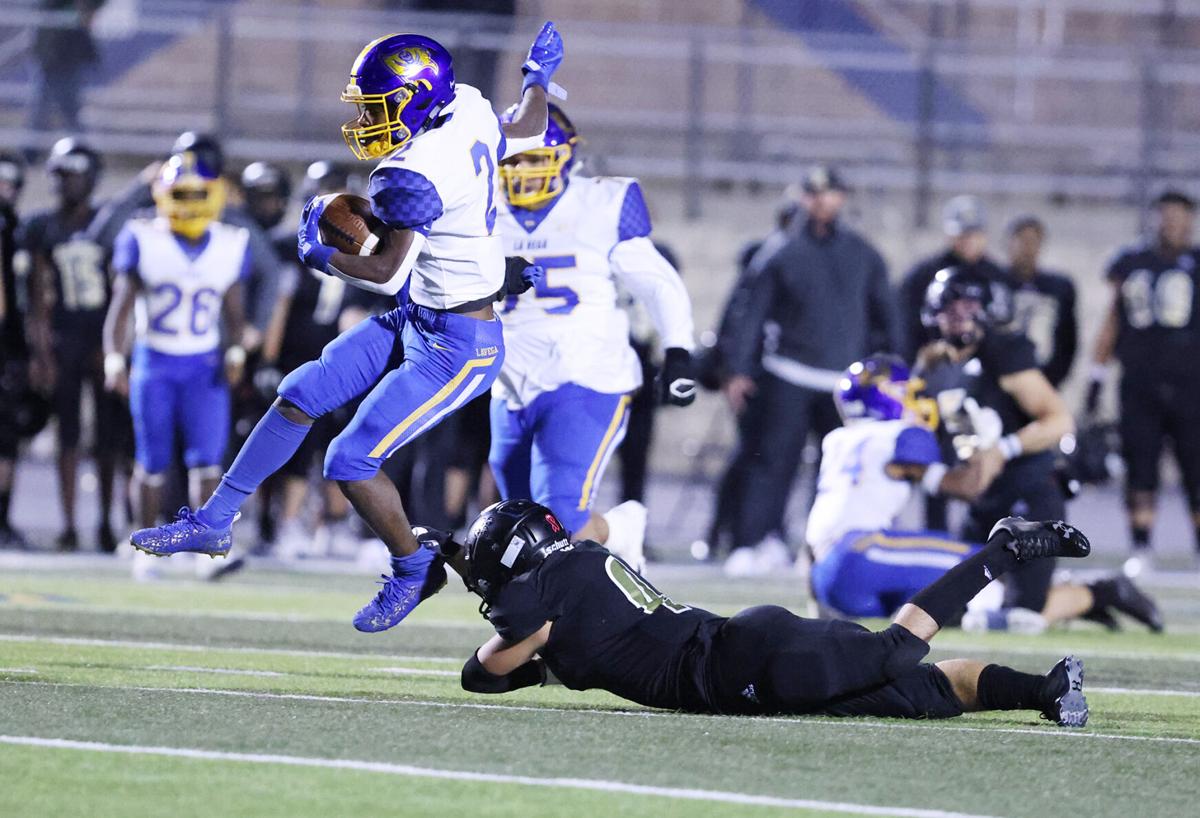 La Vega's Mekhi Rice pulls in a long pass over Kaufman's Kaleb Lewis in the second half. 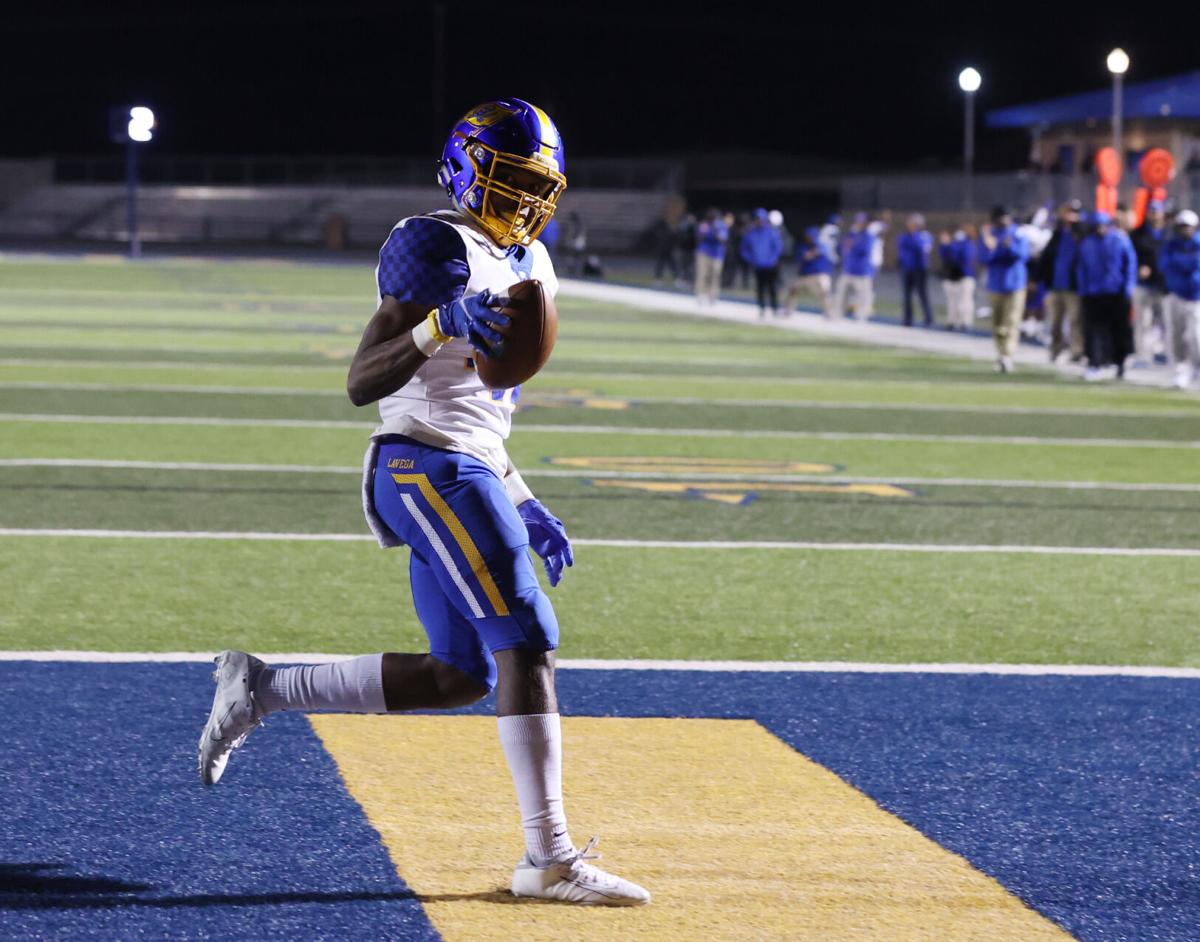 La Vega's Dontroy Sterling cruises into the end zone for a touchdown in the first half. 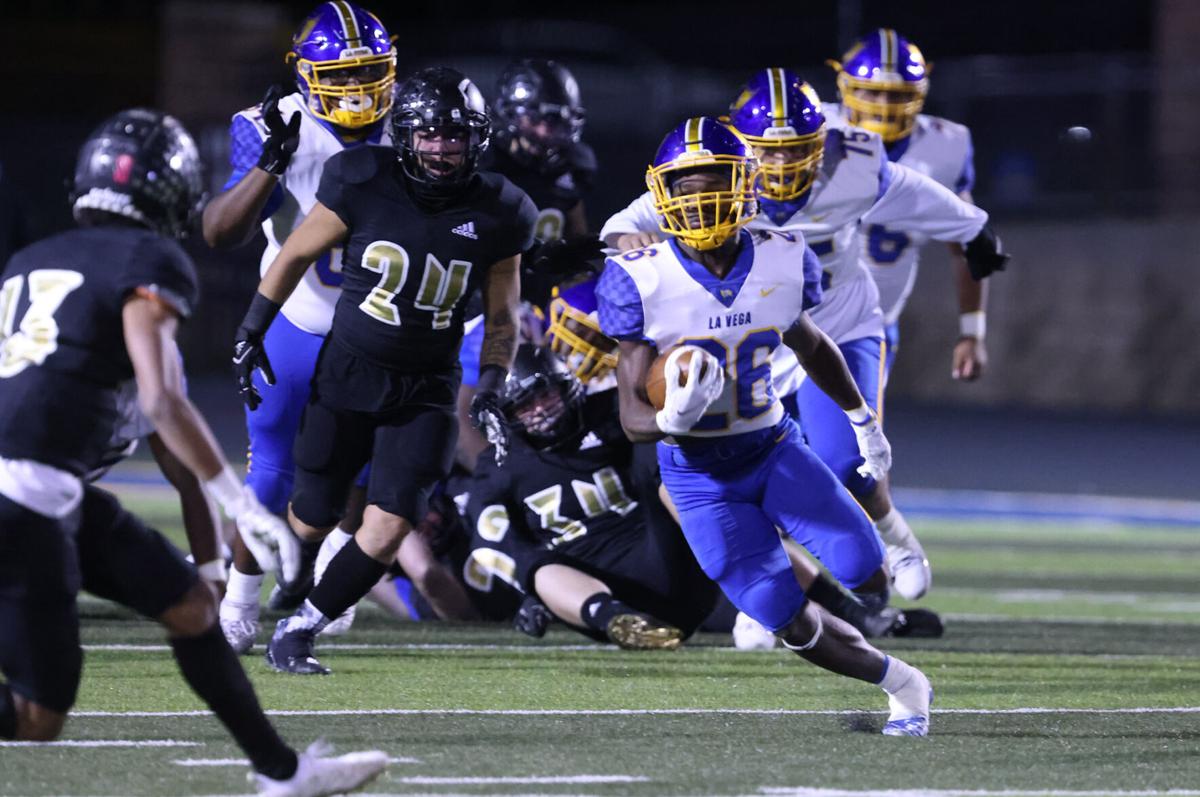 La Vega's Bryson Roland heads upfield past the Kaufman defense for a big gainer in the first half.