Colin Powell, military leader and first Black US secretary of state, dies at 84

Lambert leads No. 5 Stephenville to 44-12 win over Connally
0 comments
Share this
{{featured_button_text}}
1 of 2 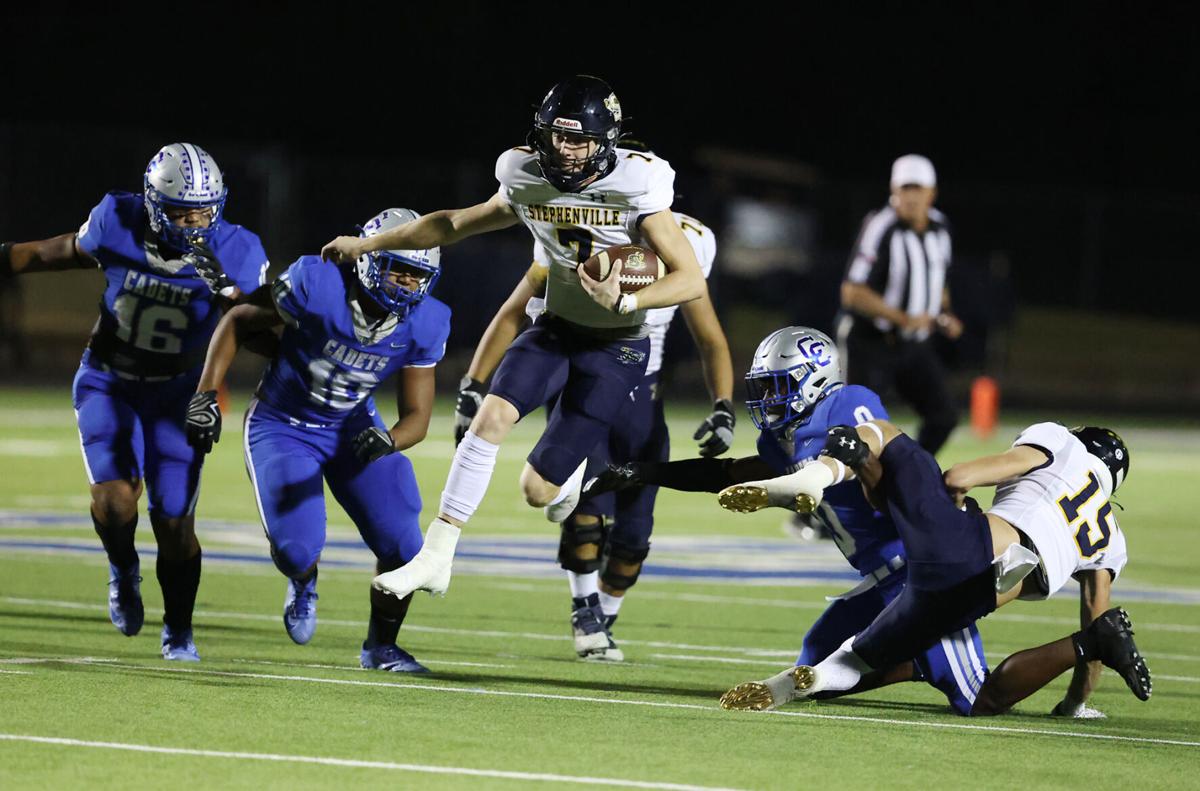 Stephenville quarterback Ryder Lambert jumps past Connally’s defense in the first half. The No. 5 Yellow Jackets raced to a 31-0 halftime lead over the Cadets on Friday, and rolled to a 44-12 win. 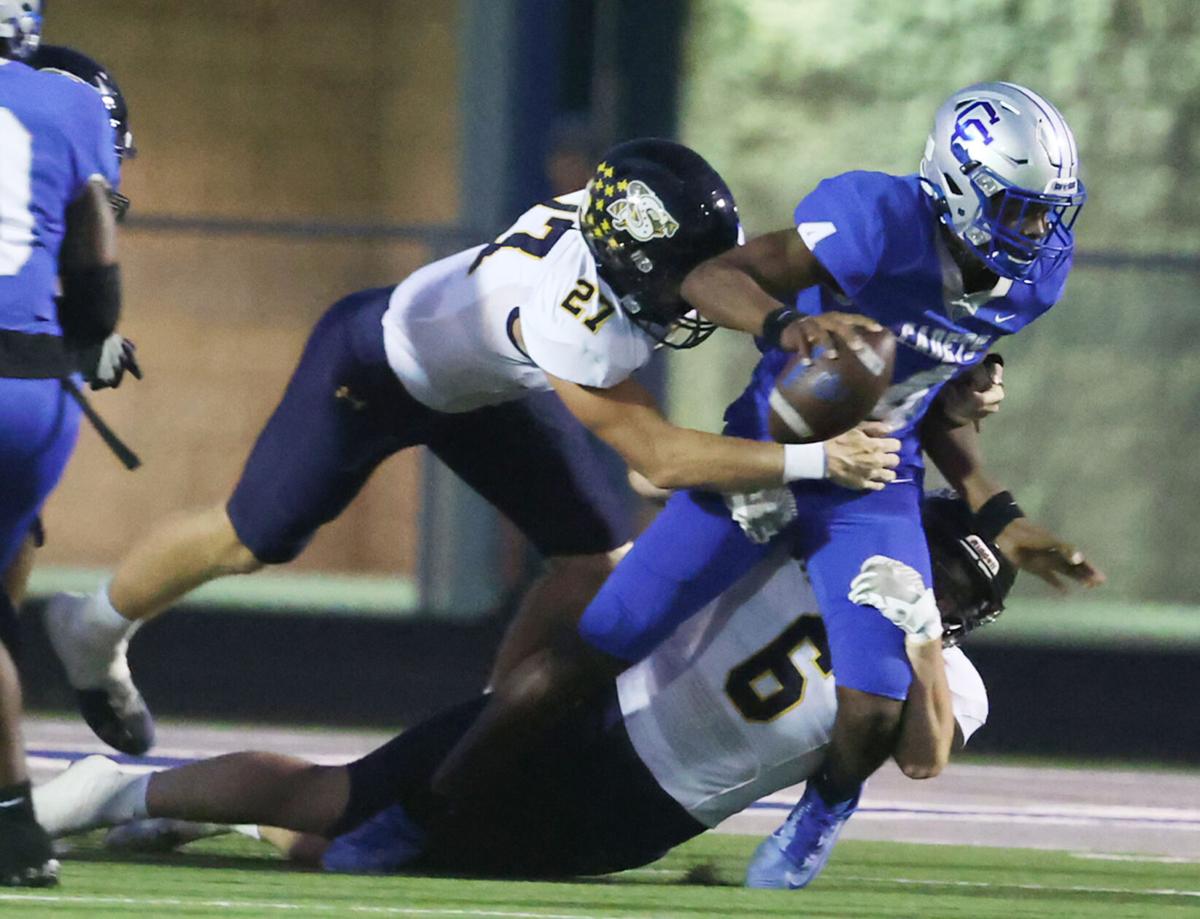 Connally's Jelani McDonald is pulled down by Stephenville's Jack Barkley, left, and defensive end Camden McKinney, right, in the first half of Friday's game.

Lambert threw for 206 yards and four touchdowns and flashed his speed by running for 148 yards and a score to lead the No. 5 Yellow Jackets to a 44-12 win over Connally on Friday night.

Lambert has thrown for 19 touchdowns in Stephenville’s 5-0 start this season.

The Yellow Jackets built a 31-0 halftime lead as the Cadets (1-3) hurt themselves with four first-half turnovers. With Stephenville’s offense repeatedly getting the ball in Connally territory, the Cadets’ defense had its back against the wall throughout the first half.

Lambert switched the Yellow Jackets’ offense into high gear beginning with the first offensive play as he hit Coy Eakin in stride down the right sideline for a 36-yard touchdown.

Getting the ball at their own 40 following a short Connally punt, the Yellow Jackets moved to the 1 before Lambert’s touchdown run was wiped out by a false start. Stephenville had to settle for Corbin Poston’s 23-yard field goal to push the lead to 10-0 with 2:24 left in the first quarter.

Taylor Bennett set up the Yellow Jackets in great field position again when he recovered a Connally fumble at the Cadets’ 37.

Lambert found Eakin behind the Cadets secondary for a 32-yard score for his 12th touchdown catch of the season to extend the lead to 17-0 on the first play of the second quarter.

But Wiggins fumbled at the end of the run, and the Yellow Jackets took advantage of the turnover as Lambert’s 17-yard pass to Reece Elston set up the quarterback’s 13-yard touchdown run to push the lead to 24-0 with 7:14 left in the second quarter.

The Yellow Jackets had time to score another touchdown before halftime as Lambert hit Elston for a 43-yard touchdown pass to take a 31-0 lead.

The Cadets showed some offensive spark to open the second half as Jelani McDonald hit Sean Harris for 56 yards to set up Germone Powell’s two-yard touchdown run with seven minutes left in the third quarter.

But the Yellow Jackets responded with Lambert’s seven-yard scoring pass to Kallan Kimbrough to open up a 38-6 lead with 1:53 left in the third quarter.

McDonald came up with another big pass play when he found Tre Wisner for 47 yards to set up Wisner’s two-yard scoring run to cut Stephenville’s lead to 38-12 with 45 seconds left in the third quarter.

“I was proud of our kids in the second half,” Gerik said. “That’s what we talked about at halftime. I’m not worried about that score any more. I want to see what you can do in the second half to come out and stay together as a team and how you can fight to the end, and I thought our kids did that.”

Poston hit field goals of 30 and 20 yards in the fourth quarter to push the final score to 44-12.

Stephenville quarterback Ryder Lambert jumps past Connally’s defense in the first half. The No. 5 Yellow Jackets raced to a 31-0 halftime lead over the Cadets on Friday, and rolled to a 44-12 win.

Connally's Jelani McDonald is pulled down by Stephenville's Jack Barkley, left, and defensive end Camden McKinney, right, in the first half of Friday's game. 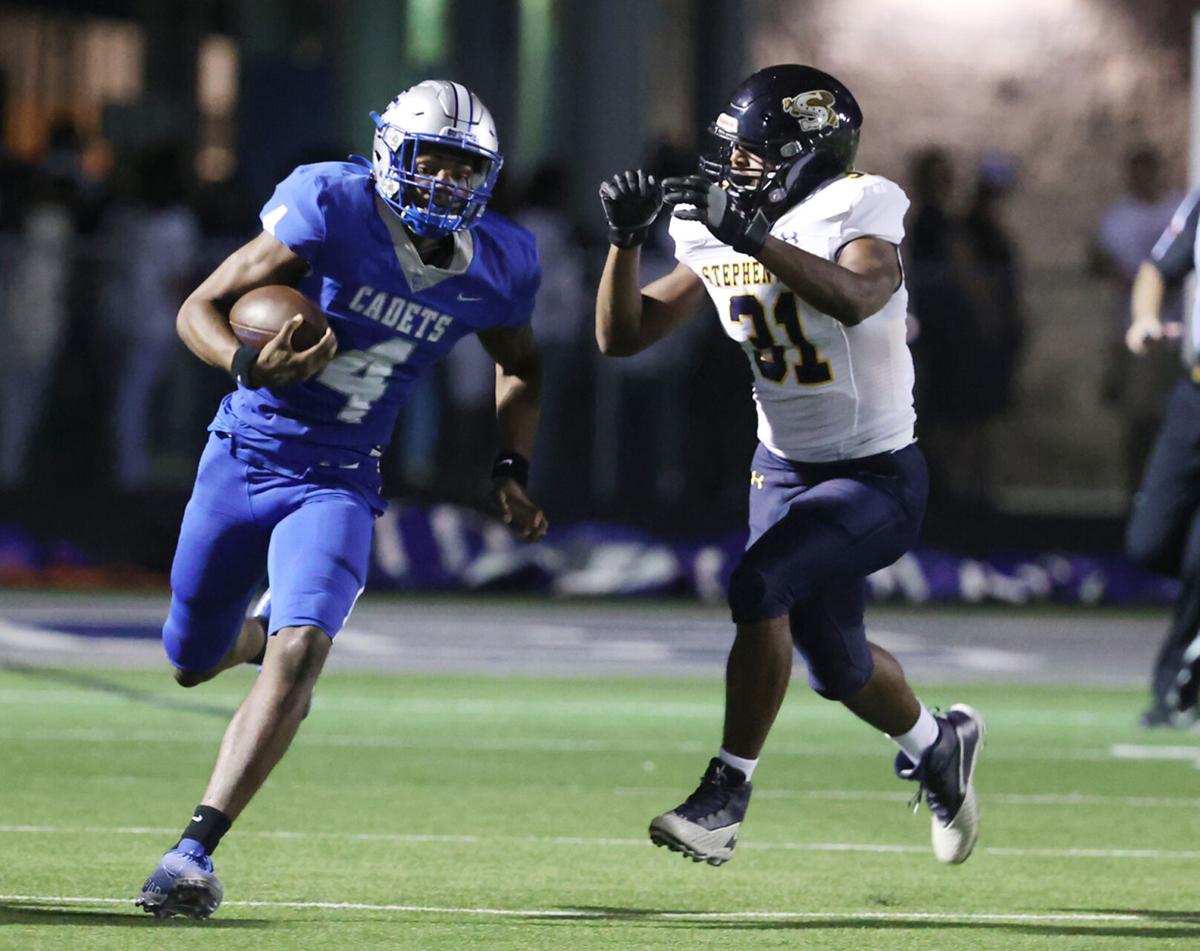 Connally's Jelani McDonald runs to the outside while being pressured by Stephenville defensive tackle Malachi Arredondo in the first half. 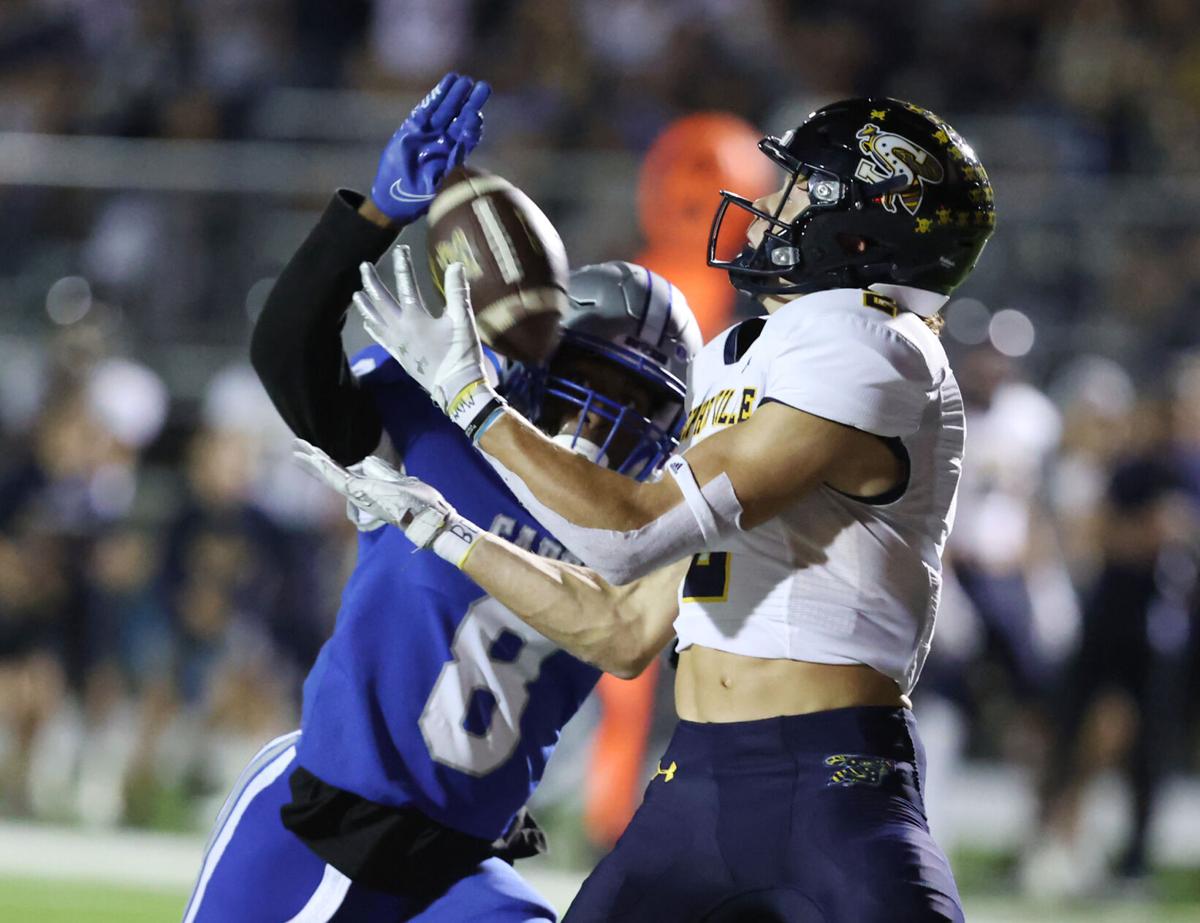 Stephenville's Coy Eakin pulls down a touchdown pass over Connally's Azure Rose in the first half. Stephenville ran to a 31-0 halftime lead and never looked back Friday night, winning 44-12. 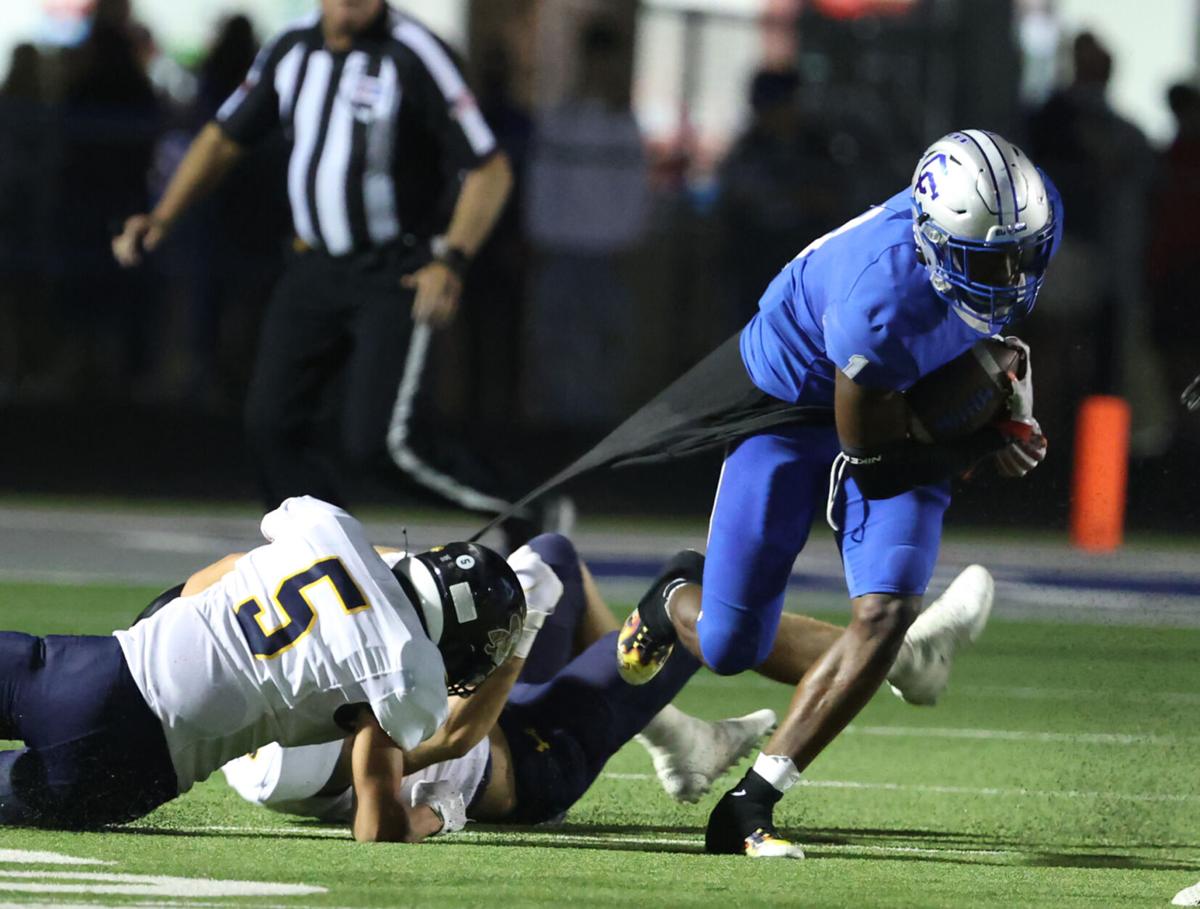 Connally's Tre Wisner has his jersey pulled on by Stephenville cornerback Ben Kirbo while trying to gain yardage in the first half.