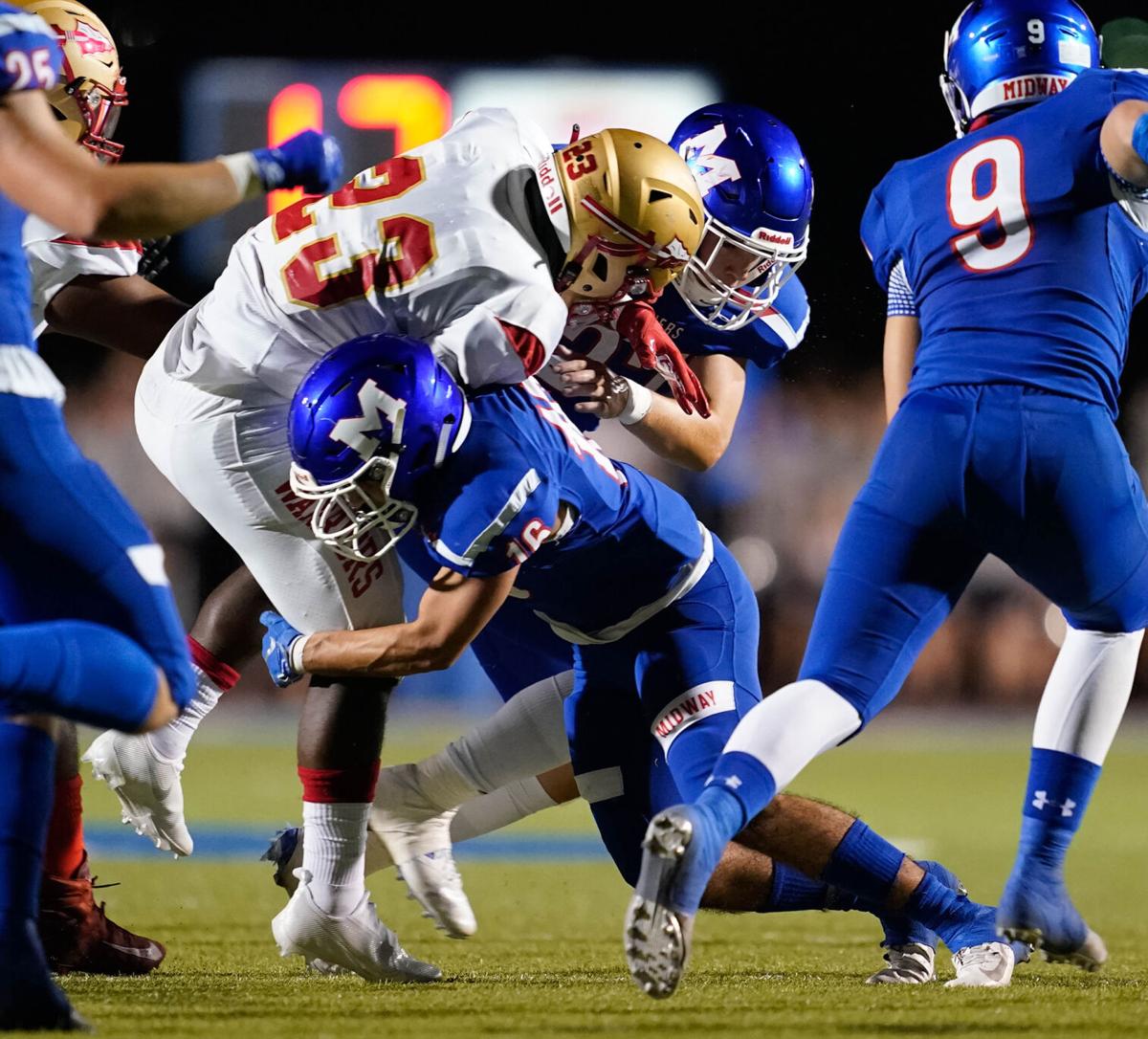 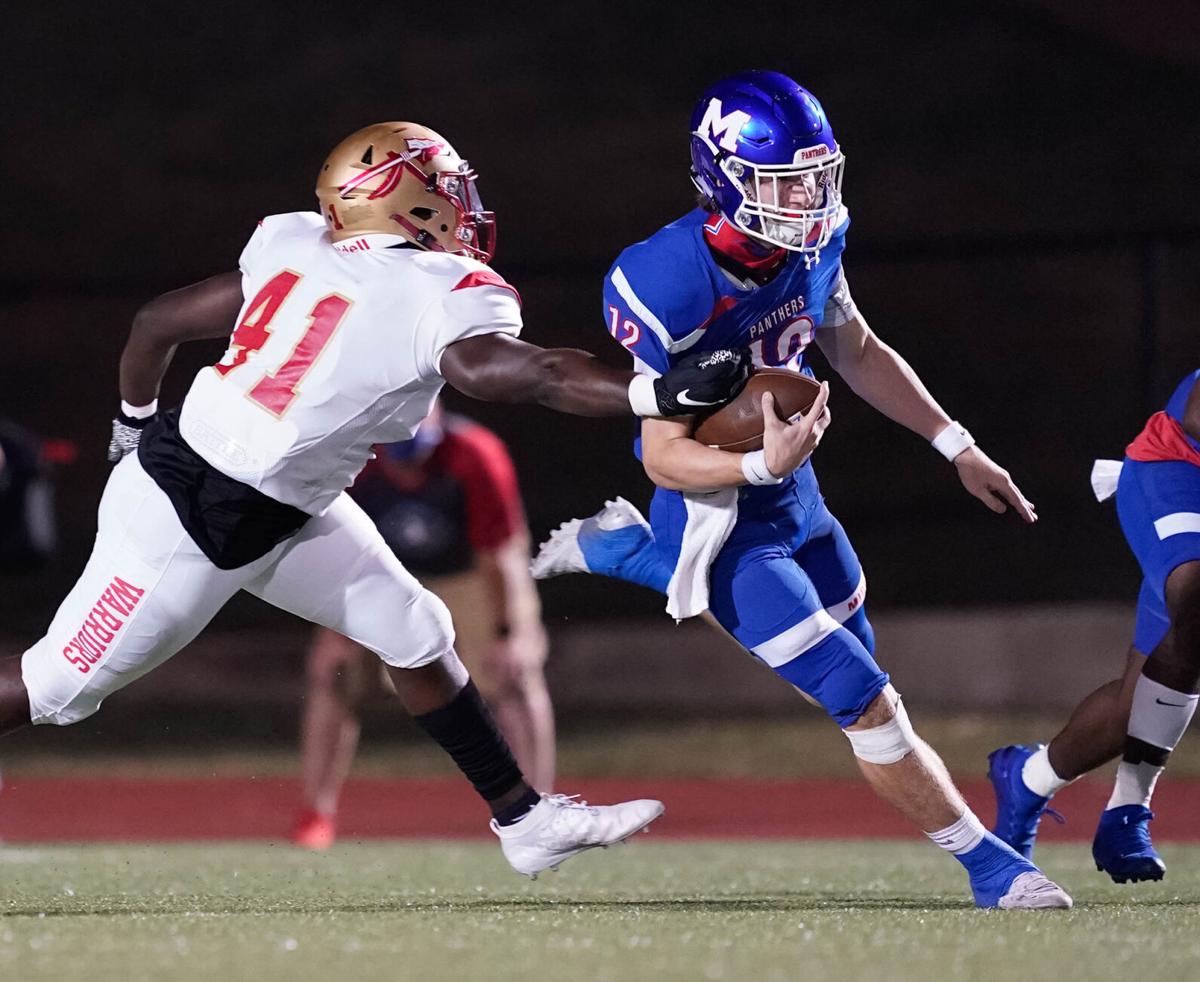 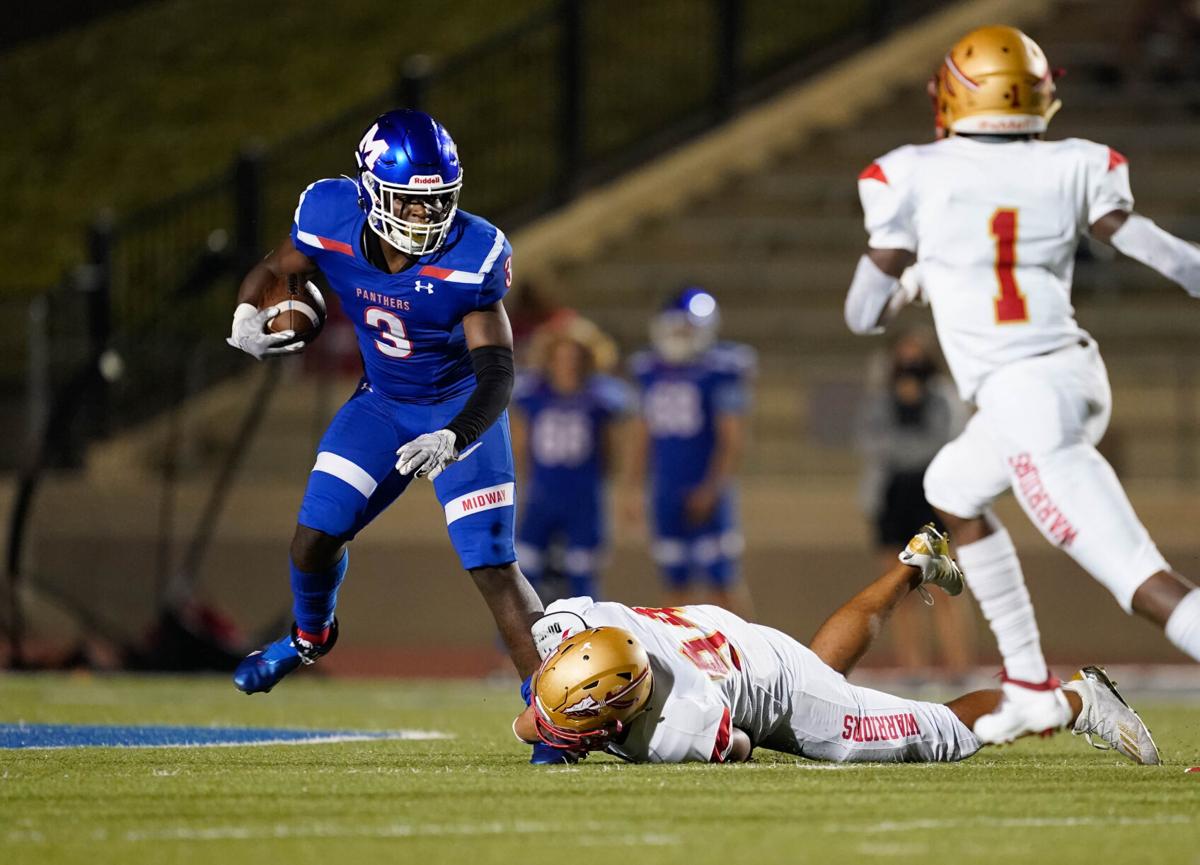 Midway's Dhamir McDonnaugh (left) tries to slip past the South Grand Prairie defense in the first half. 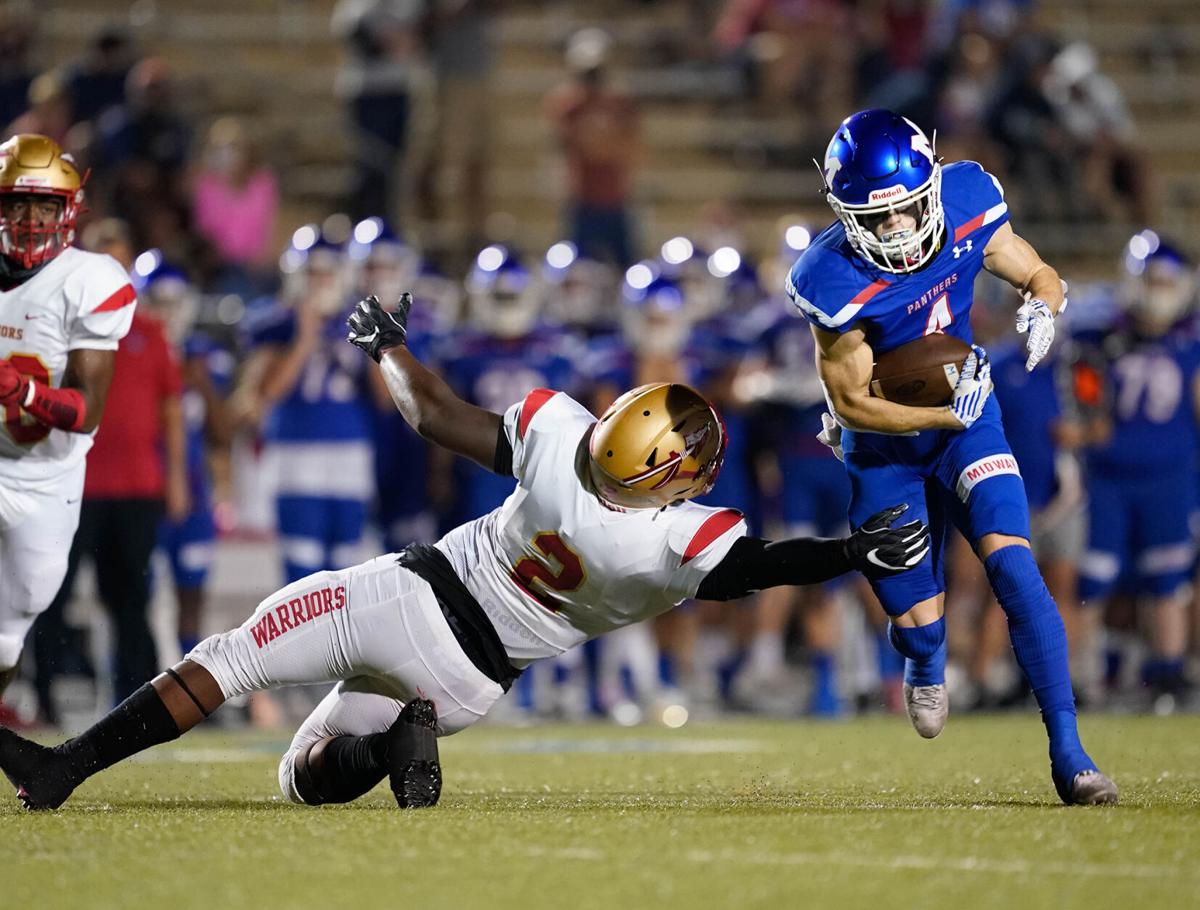 Midway's Zach Stewart (right) gets past South Grand Prairie's Andres Palomares in the first half.

The Midway Panthers looked like a completely different team from a week ago, but were unable to stop a late barrage of quick scores from the Warriors as Midway fell to South Grand Prairie, 27-24, Friday night at Panther Stadium.

Midway running back Jaden Johnson and quarterback Garrett Childers were big contributors for the Panthers offense, which looked much improved from the Austin Westlake loss last week.

The first quarter played similar to that of a prize fight, as both teams seemed to be feeling one another out without throwing any devastating blows. Midway (0-2) had a chance to score after a botched South Grand Prairie punt, but was unable to capitalize.

The second quarter saw the Panthers find the end zone to erase the scoreless tie. Johnson was able to break away for a 17-yard touchdown run. South Grand Prairie (2-0) would take little time to respond as Warriors quarterback Kendall Johnson found wideout Josh Nicholson, connecting on a 64-yard touchdown pass. A missed point after still allowed Midway to hold on to a one-point lead.

With not much time and good field position thanks to a South Grand Prairie penalty, the Panthers extended the lead before halftime on the leg of kicker Ivan Maldonado connecting with a 37-yard field goal.

The Warriors received the ball to start the second half and used the opportunity to drive quickly down the field before Johnson and Nicholson clicked for the duo’s second touchdown connection on the night to give South Grand Prairie their first lead of the game.

After punts on both teams’ next drives, Midway retaliated. The Panthers put together a seven-play, 61-yard drive that was capped off with Johnson’s second touchdown of the evening. The five-yard score would give the Panthers the lead back which would hold throughout the third quarter. Johnson finished the game with 17 carries for 103-yards and two touchdowns.

South Grand Prairie took control of the football early in the fourth quarter as the Warriors were able to quickly march down the field and get a go ahead score from running back Javarius Crawford.

The Panthers offense was unable to gain any traction and were forced to punt the ball away. South Grand Prairie had all the momentum from their previous drive and it fueled another quick score as the Warriors’ rushing attack could not be contained.

Midway would not go quietly as Childers came up big for the Panthers, connecting with wide receiver Zach Stewart for a 45-yard touchdown pass and cutting the deficit to three points. Midway was unable to get a stop to get the ball back as time ran out.

The Panthers are off next week before they begin district play against Mansfield on Thursday, Oct. 22.

Midway's Dhamir McDonnaugh (left) tries to slip past the South Grand Prairie defense in the first half.

Midway's Zach Stewart (right) gets past South Grand Prairie's Andres Palomares in the first half.