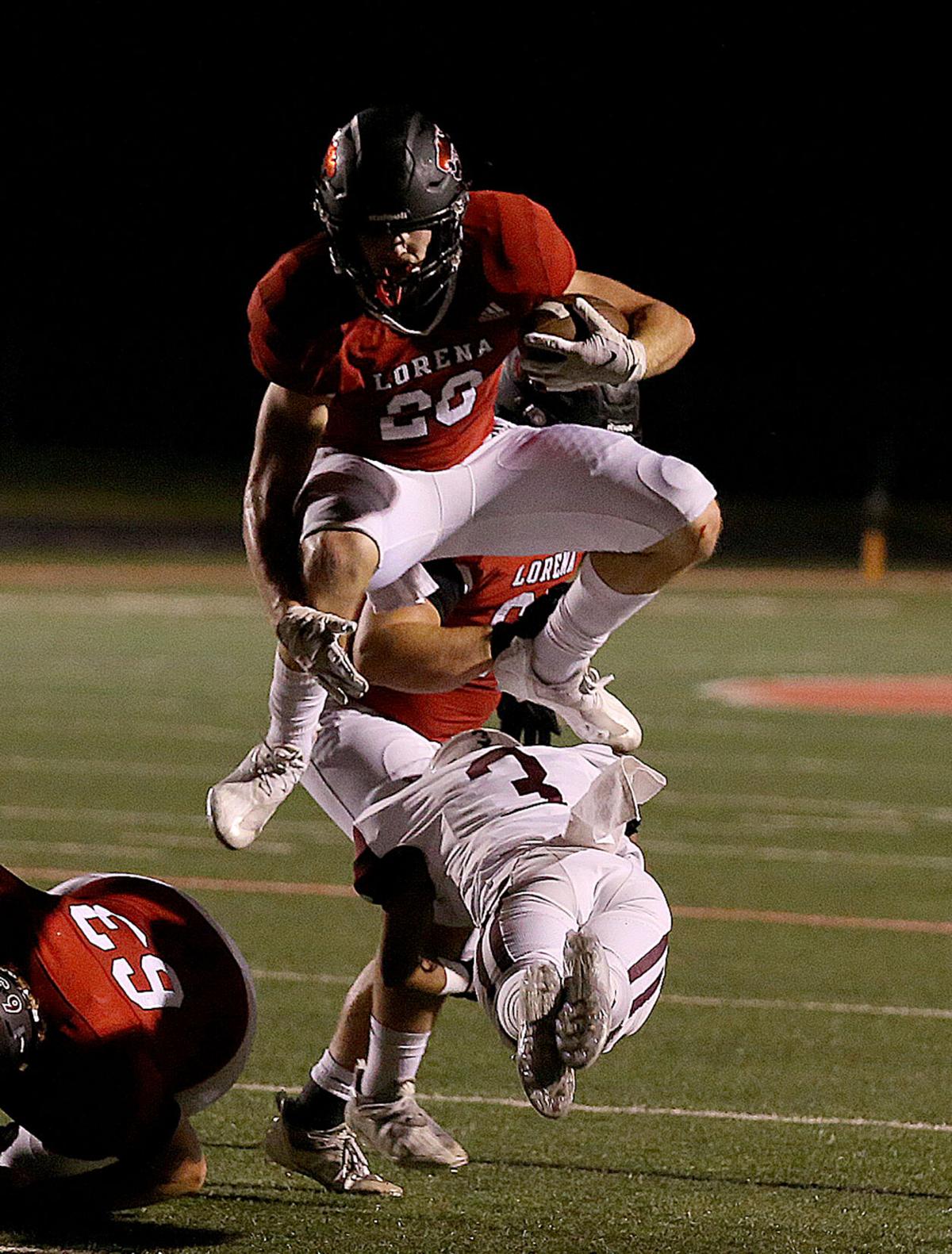 Lorena's Reed Michna leaps over Cameron's Javares Crittendon on the way to a first-half touchdown. 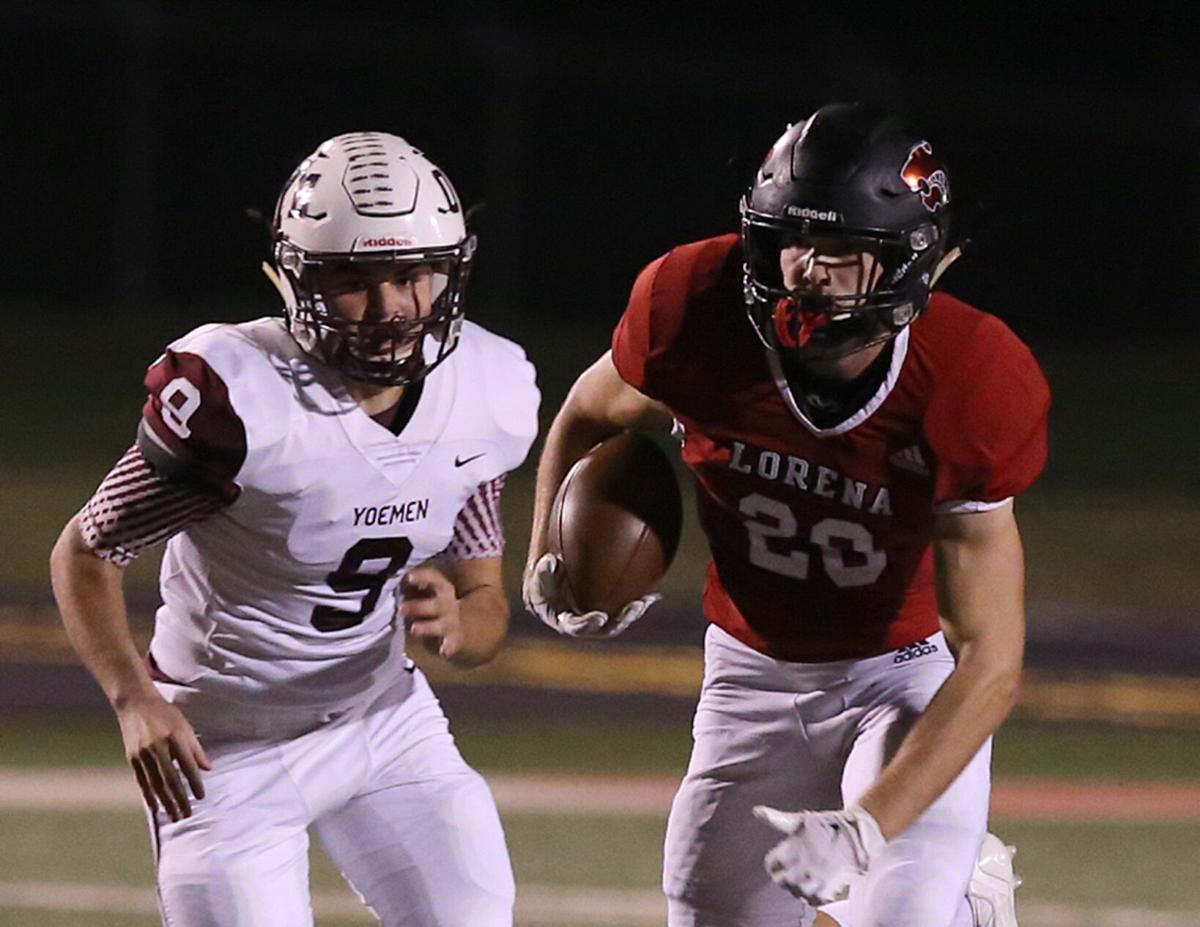 Lorena’s Reed Michna runs past Cameron’s Landen Greene for a touchdown in the first half of Friday’s game in Lorena. 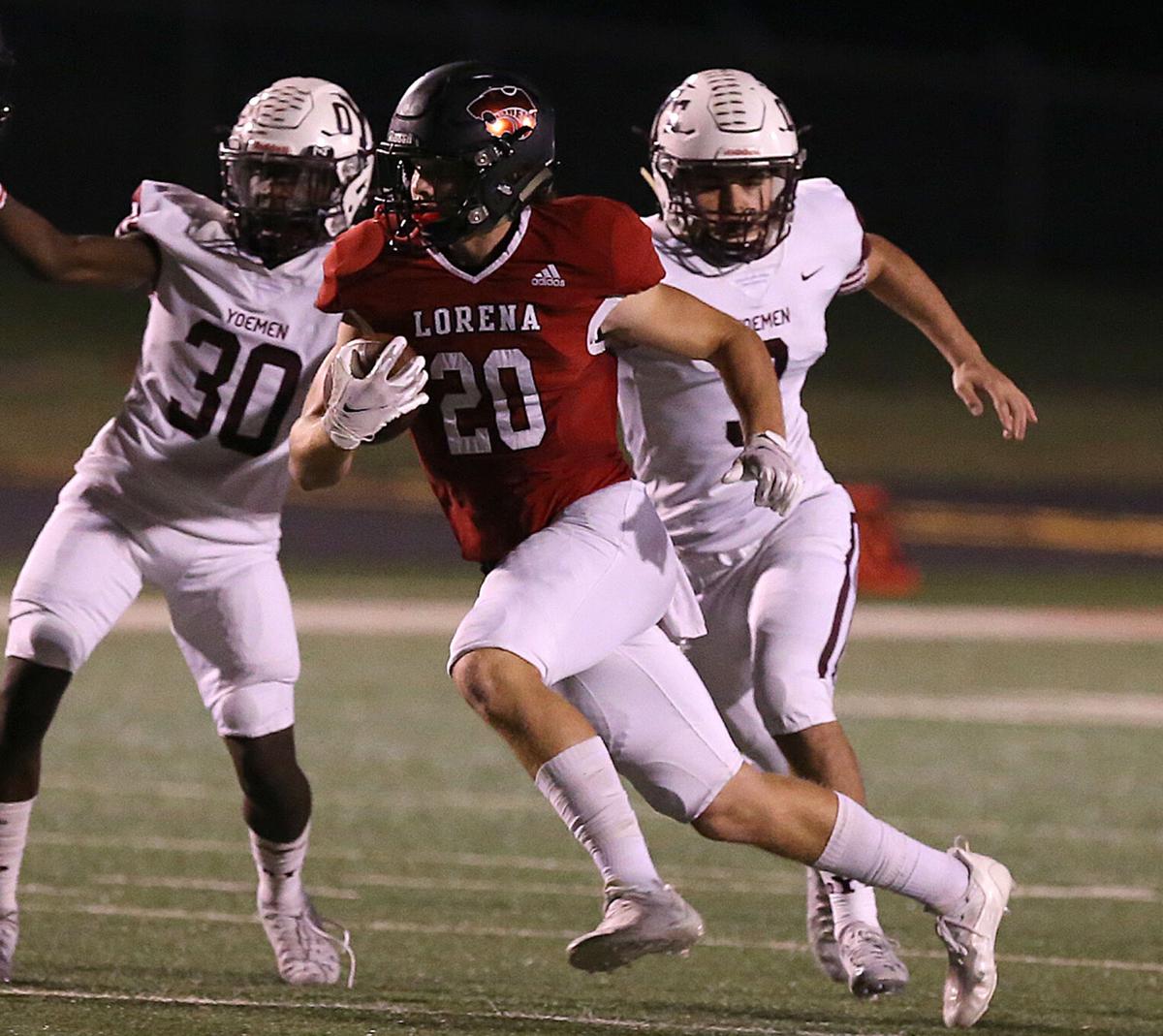 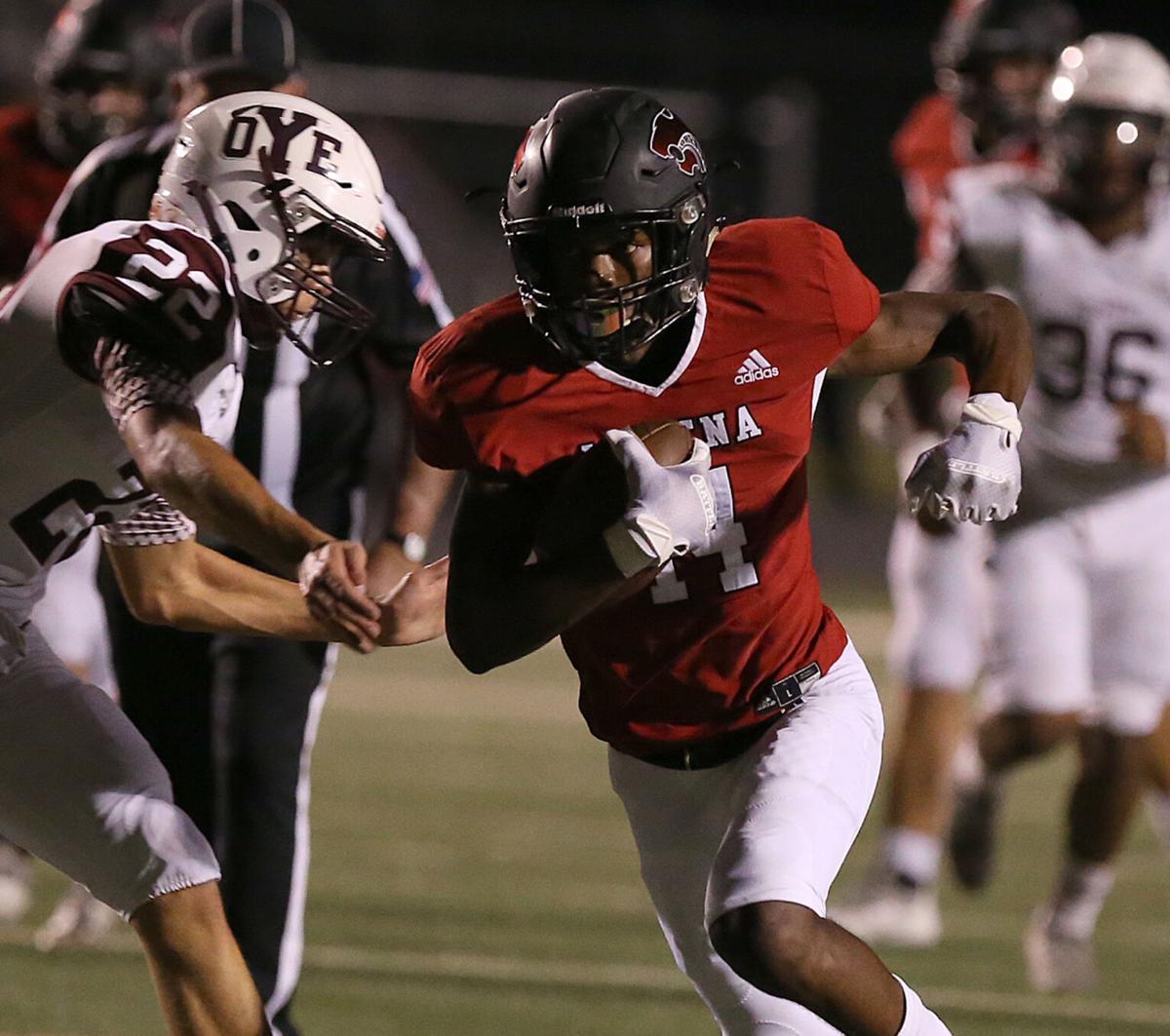 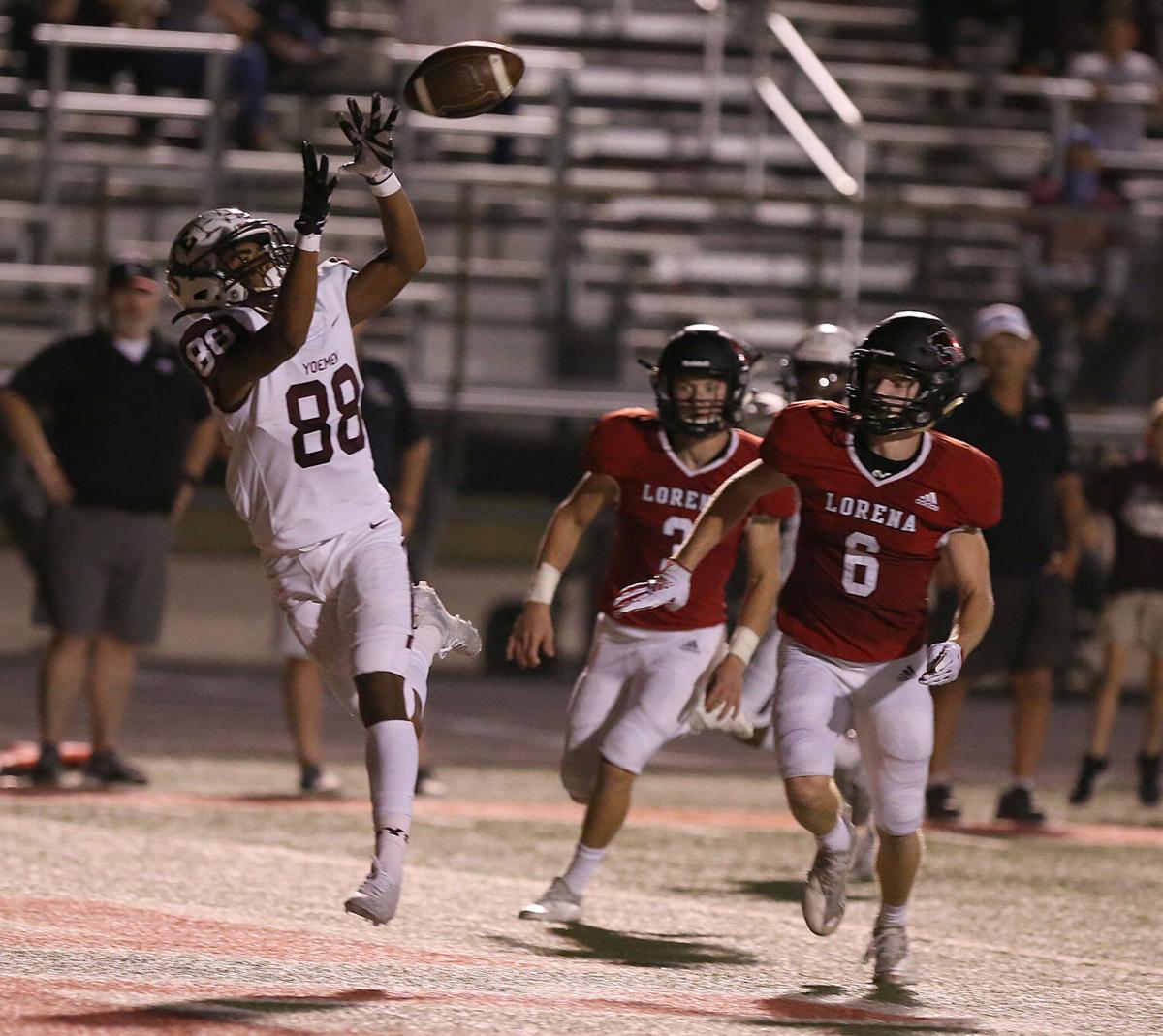 Cameron’s Trayjen Wilcox attempts to catch the ball in the end zone against Lorena defenders Jackson Generals, center, and Kasen Taylor, right, in the first half. 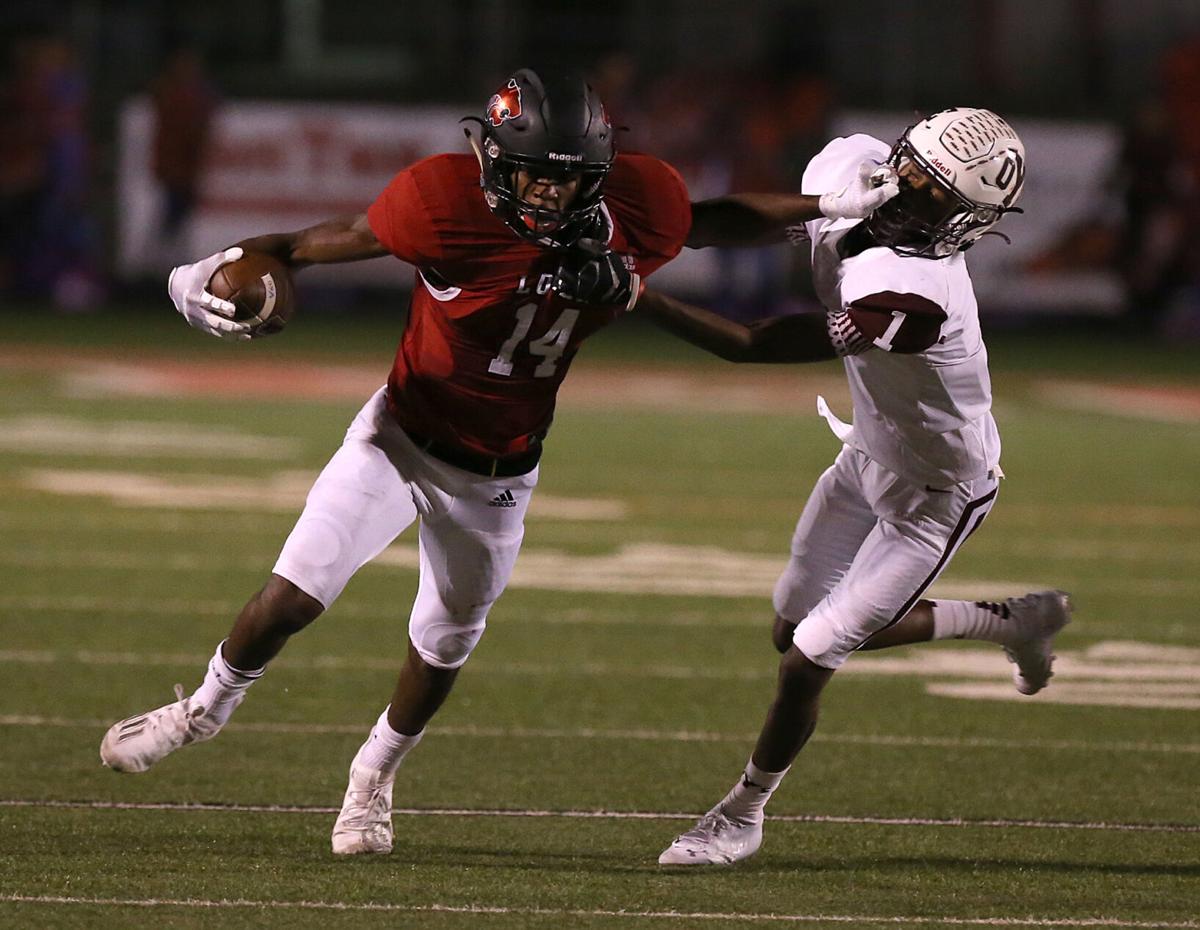 But the No. 8-ranked Leopards showed their strength in wrestling it back with authority after halftime.

Lorena dominated the third and fourth quarters to claim a 42-20 victory over the Yoemen on Friday Night at Leopard Field.

The Leopards defense gave up a grand total of one yard on Yoe’s first three possessions of the second half.

With the defense controlling the Yoemen, Lorena turned to its power running game on offense and churned out four second-half touchdowns.

Leopards running back Reed Michna rushed for 136 yards and four TDs on 18 carries, including a pair of short scoring runs in the third quarter.

When Lorena tandem running back Rhett Hanson got his shot, he made the most of it, scurrying for 140 yards boosted by touchdown runs of 32 and 33 in the fourth quarter.

“With the O-line working how it is, it’s super easy for us and it makes us look amazing,” Hanson said. “Just got to give credit to the big guys.”

Yoe (3-6, 3-2) is still in good shape for a playoff berth with one game remaining against McGregor next week.

For a few minutes at the end of the second quarter and as the bands marched at halftime, it looked like the Yoemen might jumble up the standings.

However, while the home Lorena fans were nervously watching the halftime show, Leopards coach Ray Biles was spelling out the situation for his players.

“He said it was sloppy and that’s not how we play ball here,” Hanson said. “He told us to fix it, come out in the second half and punch them in the mouth.”

Biles said the Lorena coaches tweaked a few things and called on the Leopards to bounce back from adversity.

“It was a challenge,” Biles said. “We didn’t play our best half of football for the first time in a long time and we’re fortunate to still have a lead. But the second half is going to be the tale of what’s going to happen and I was very proud of the way they responded.”

The Leopards made big plays early to establish a 14-0 lead by the middle of the first quarter.

After the Lorena defense stuffed Yoe on its game-opening possession, it took Michna just one play to turn it into points. Michna ran through a seam between the right guard and tackle, then cut outside for open running room on the way to a 39-yard touchdown.

“I just saw a big hole that the linemen created and I just ran through it,” Michna said.

The Yoemen added to Lorena’s momentum by failing to handle the ensuing kickoff and Colton Dale recovered for the Leopards.

This time it took Lorena six plays to go 36 yards, but it was Michna finishing the march again. He hurdled a Yoe defender at the 4-yard line and scooted into the end zone for a two-touchdown lead.

To that point, Lorena seemed to intuit every Yoemen play, hitting them behind the line of scrimmage on most snaps. So Yoe turned to its vertical passing game. Quarterback Ryan Muniz got things going with a 17-yard completion to Trayjen Wilcox.

That was the Yoemen’s initial first down, coming late in the first quarter. But it seemed to ignite the offense. Three plays later, Muniz went deep to Pharrell Hemphill for a 30-yard gain inside the Lorena 20.

After the Yoemen gained a first-and-goal at the 4, the Leopards held them out of the end zone for three plays in a row. But on fourth-and-goal from the 1, running back Fabian Salomon sliced through the Lorena front for the touchdown.

Hemphill set up the Yoemen’s next score with an interception of a wild Ryne Abel pass and a return of more than 50 yards to the Leopard 22.

Muniz made the takeaway count on third-and-goal from the 9 when he found Jaidyn Sanchez in the back left corner of the end zone for a touchdown. Yoe missed the extra point and trailed 14-13 at halftime.

Lorena was playing without top receiver Jadon Porter, who had concussion-like symptoms after the Leopards’ win over McGregor last week.

Lorena’s Braylon Henry, Kasen Taylor, Joe Gutshall and Baxter Bankston each had multiple tackles behind the line of scrimmage as the Leopards consistently dropped Yoe backs for losses.

“Those (Yoe) guys can score from anywhere,” Biles said. “They have play after play of home runs. I can’t say enough about our defensive effort.”

Lorena's Reed Michna leaps over Cameron's Javares Crittendon on the way to a first-half touchdown.

Lorena’s Reed Michna runs past Cameron’s Landen Greene for a touchdown in the first half of Friday’s game in Lorena.

Cameron’s Trayjen Wilcox attempts to catch the ball in the end zone against Lorena defenders Jackson Generals, center, and Kasen Taylor, right, in the first half.