Groesbeck quarterback Zach Wilson had one last desperation shot at the end zone with the Goats’ chance of advancing in the playoffs at stake.

But Dallas Madison’s Tristin Rodgers came down with the interception in the end zone as time expired, preserving the Trojans’ 36-29 victory over Groesbeck on Saturday night at Waco ISD Stadium.

Just because Groesbeck’s final prayer wasn’t answered, though, doesn’t mean the Goats had reason to mope on the ride home at the end of the season.

Groesbeck (6-4) built an impressive turnaround this fall, going from a 2-8 campaign in 2019 to second place in District 8-3A Division I this season. The Goats also gave themselves a chance in the bi-district game despite losing starting QB Allen Lewis and 1,300-yard rusher Ma’Qua Smith late in the season to knee injuries.

Wilson stepped in at quarterback and gave Groesbeck a chance against Madison. He passed for 110 yards and three touchdowns and rushed for 100 yards and a TD.

Wilson’s spot-on fade pass to Tyson Pringle tied the game at 29 with 3:58 left in the third quarter.

But that would be Groesbeck’s final score.

Madison, which started the season a month late due to Dallas County’s response to COVID-19, scored the game-winning touchdown on Jayleen Record’s one-yard run with 7:57 left in the fourth quarter.

The Trojans (4-2) advance to play Mineola in the area round of the 3A D-I playoffs.

The Groesbeck defense got a crucial stop late in the fourth quarter, stuffing Madison QB Chris Tucker for a one-yard gain on fourth-and-two from the Goats’ 41.

That gave Groesbeck 1:25 to go 59 yards for a touchdown without any timeouts remaining.

On the fourth play of the drive, Wilson connected with Pringle for a 21-yard gain to the Madison 31. But by the time Groesbeck lined up and Wilson spiked the ball on first down, the Goats were left with one tick of the clock. Wilson was trying to get the ball to Pringle again on the final play.

Groesbeck jumped out to a 9-0 lead in the first quarter after benefiting from an errant Madison snap that led to a safety, and then the first big play by Wilson.

Following the safety, the Goats started a drive at the Trojans’ 36. Wilson broke loose for a 35-yard run on the first play of the march. He reached out for the goal line as he was being dragged down, but he was ruled down at the 1. No matter, the Groesbeck QB plowed his way into the end zone on the next play for a 9-0 lead less than two minutes into the contest.

Madison answered with a 54-yard touchdown drive to get on the board. Tucker scrambled 25 yards for the touchdown.

The Trojans then got a three-and-out on defense and constructed another drive. This time Madison running back Jayleen Record got to the outside and finished off a 63-yard march with a 15-yard scoring run.

That put Madison in front, 14-9, and the back-and-forth battle was joined.

Groesbeck pushed back into the lead on Wilson’s 15-yard touchdown pass to Pringle. Madison blocked the extra point, but the Goats still had a 15-14 lead late in the first quarter.

That advantage was short-lived after Record returned the ensuing kickoff 85 yards for a touchdown.

One play after Groesbeck defensive lineman Kenny Bennett recovered a Madison fumble, Wilson made it count by connecting with Anthony Lewis for a 26-yard touchdown. That put the goats back in front, 22-21.

However, Madison moved down the field late in the second quarter to retake the lead going into halftime. Tucker threw a dart to Demorio Sheffield for a 22-yard touchdown and Alex Bowman tossed the two-point conversion pass to J’Kobe Dorsey with 42 seconds left in the second quarter.

Groesbeck struggled to contain the Madison backs. Verrick Campbel rushed for 181 yards on 20 carries and Tucker added 134 on 14 totes.

Groesbeck running back John Reed finished the season with a 14-carry, 109 rushing-yard effort.

WIMBERLEY — There’s a reason why Jonathon Brooks has a scholarship waiting for him at the University of Texas. 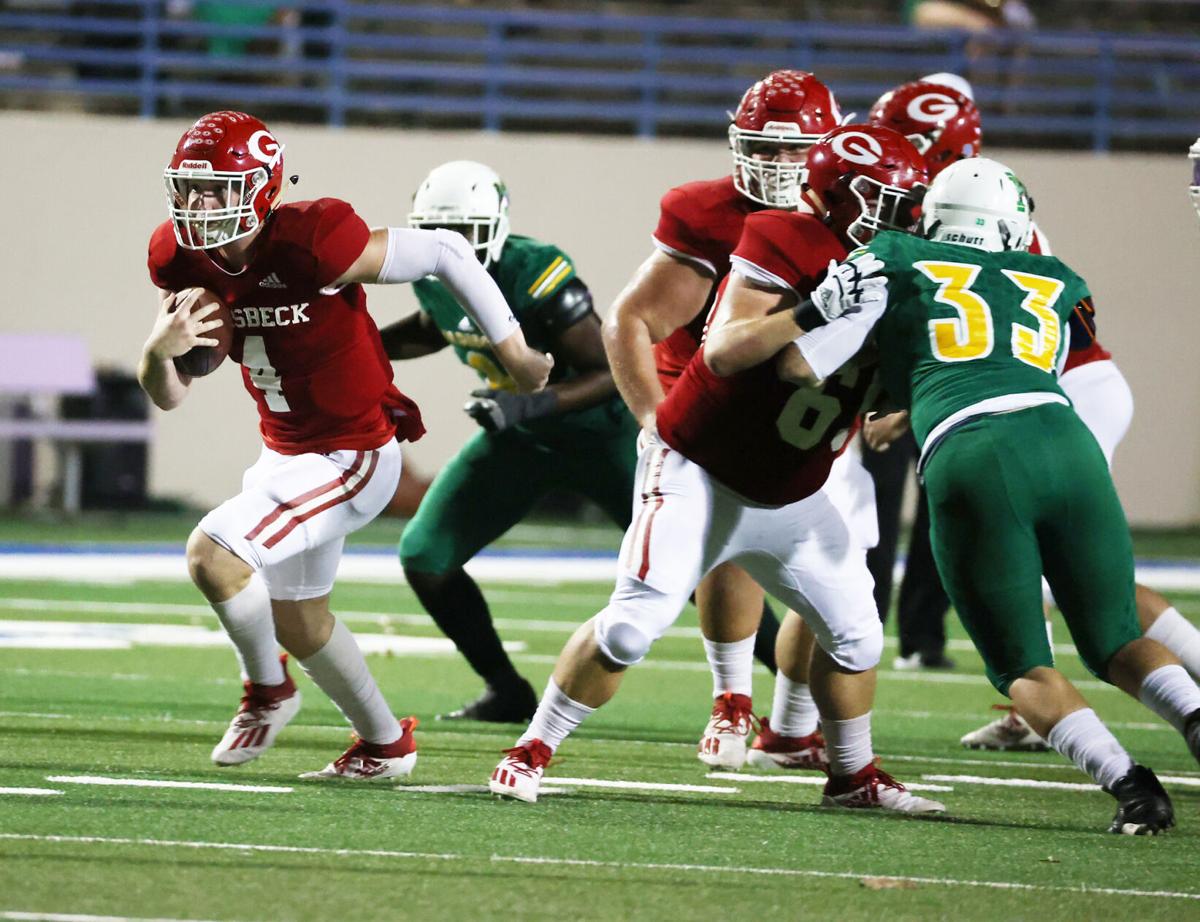 Groesbeck quarterback Zach Wilson takes off on a long run against Dallas Madison in the first half on Saturday night at Waco ISD Stadium. 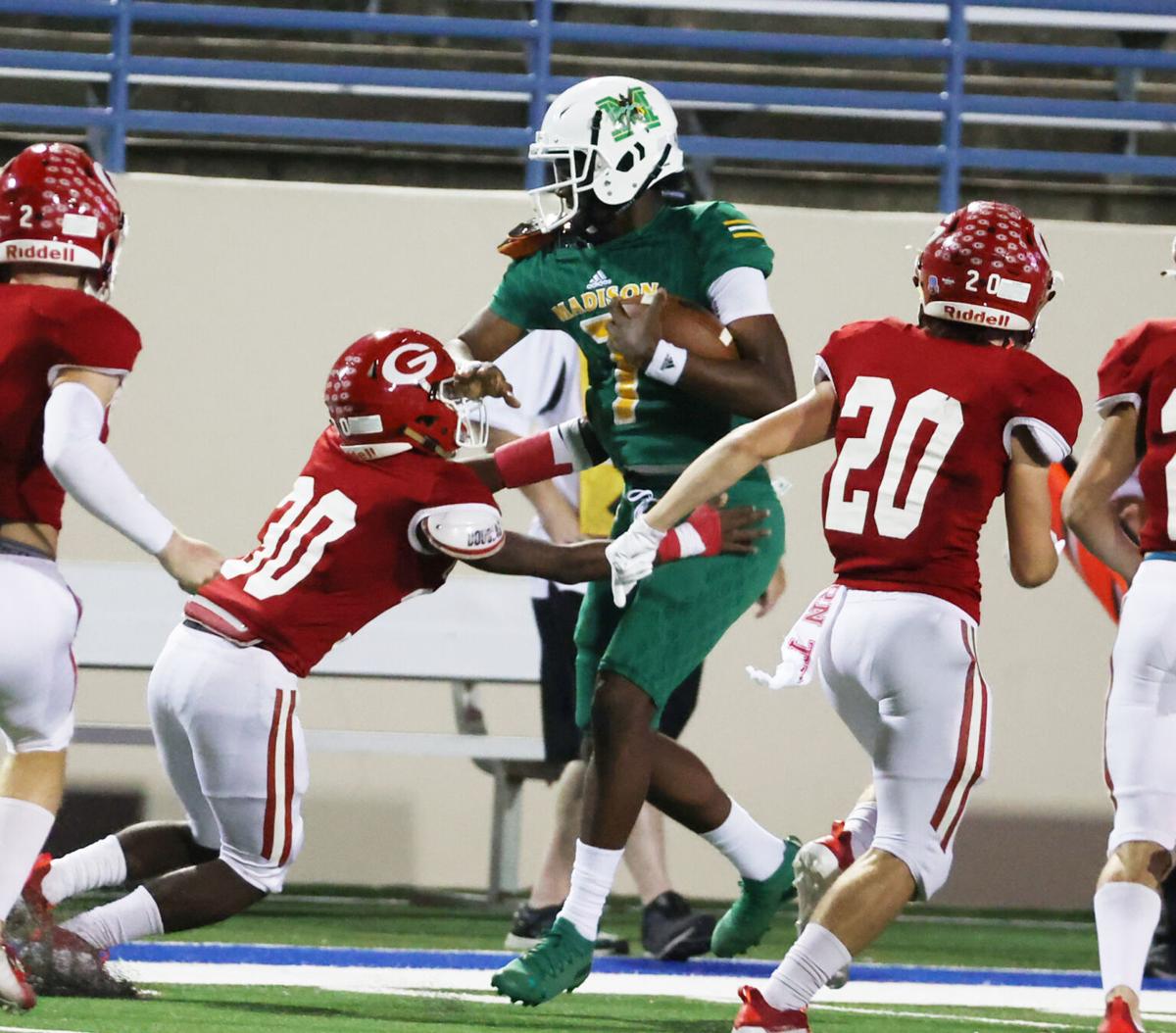 Dallas Madison quarterback Chris Tucker is tackled by Groesbeck’s Ca’zain Bradley (left) in the first half. 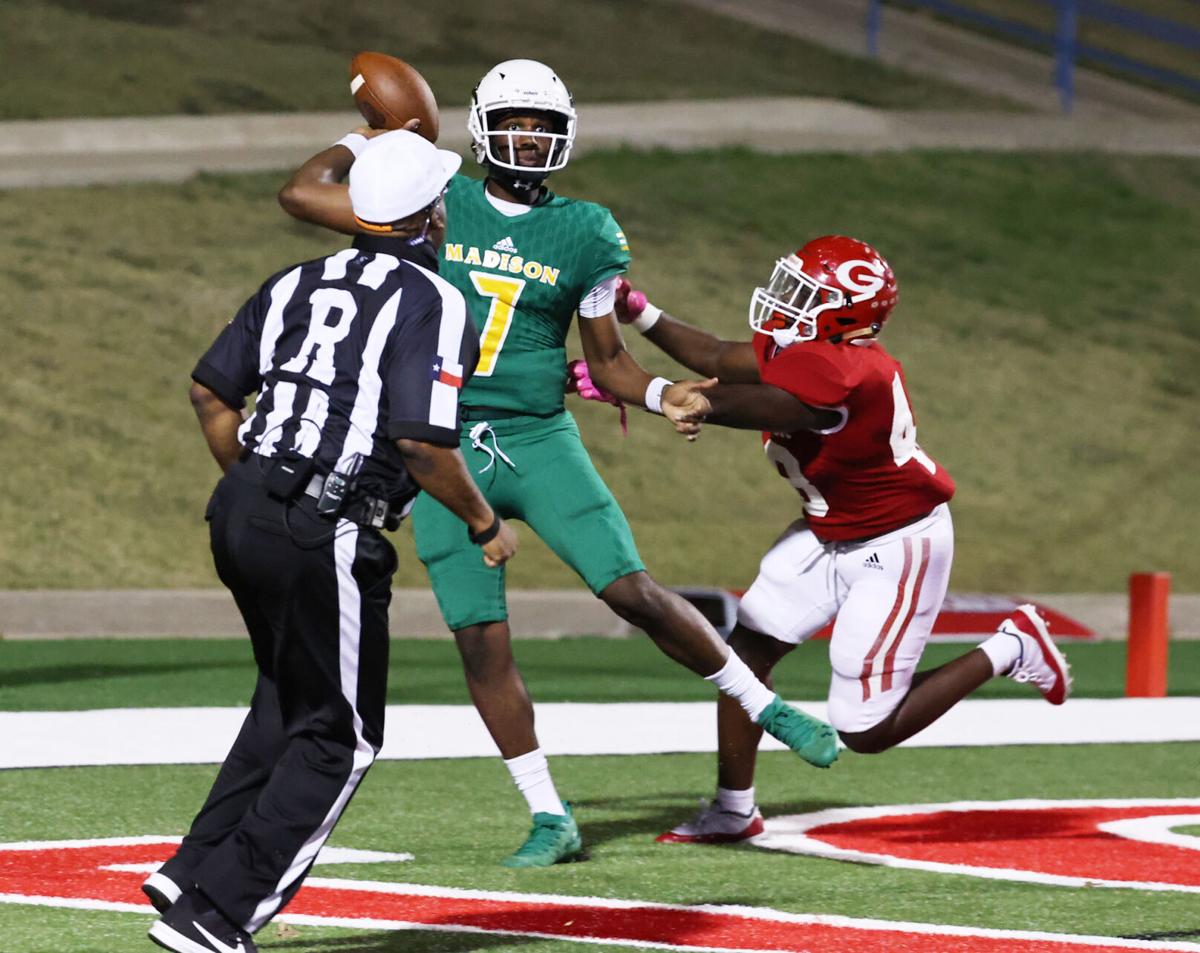 Groesbeck's Kenny Bennett (right) pressures Dallas Madison quarterback Chris Tucker who was flagged for intentionally grounding resulting in a safety in the first half. 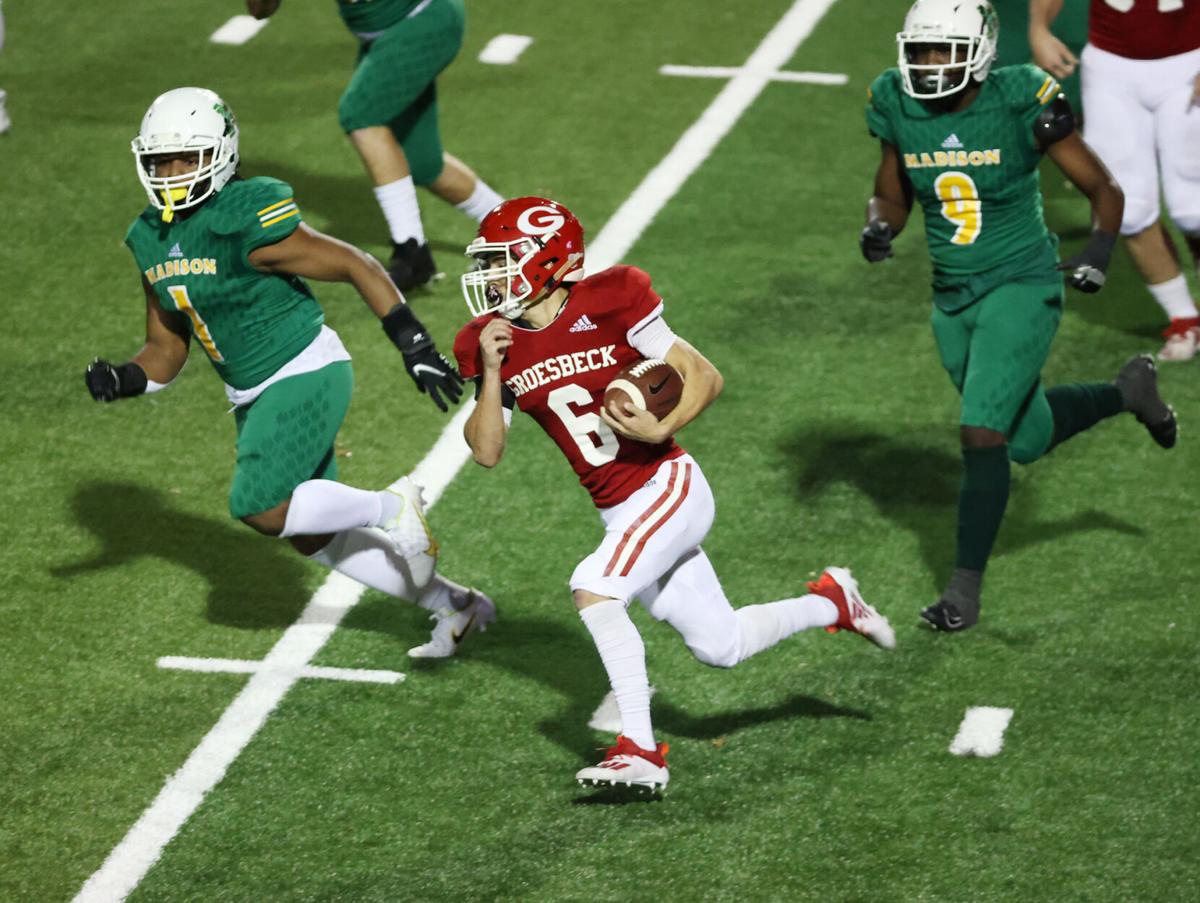