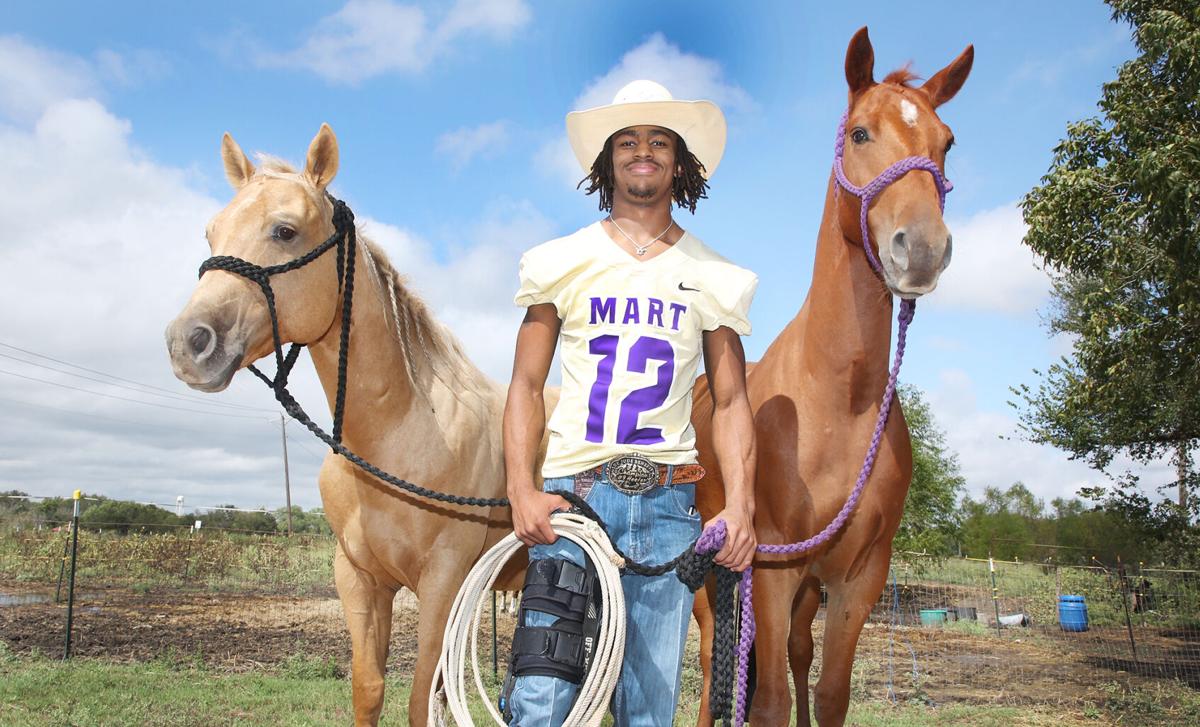 Mart senior Kei’Shawn Clater, who helped the Panthers reach the state championship game in 2018, 2019 and 2020, trained both his horses, Billy (left) and Moose. Along with being a horse trainer, Clater is working toward adding team roping as his second sport. 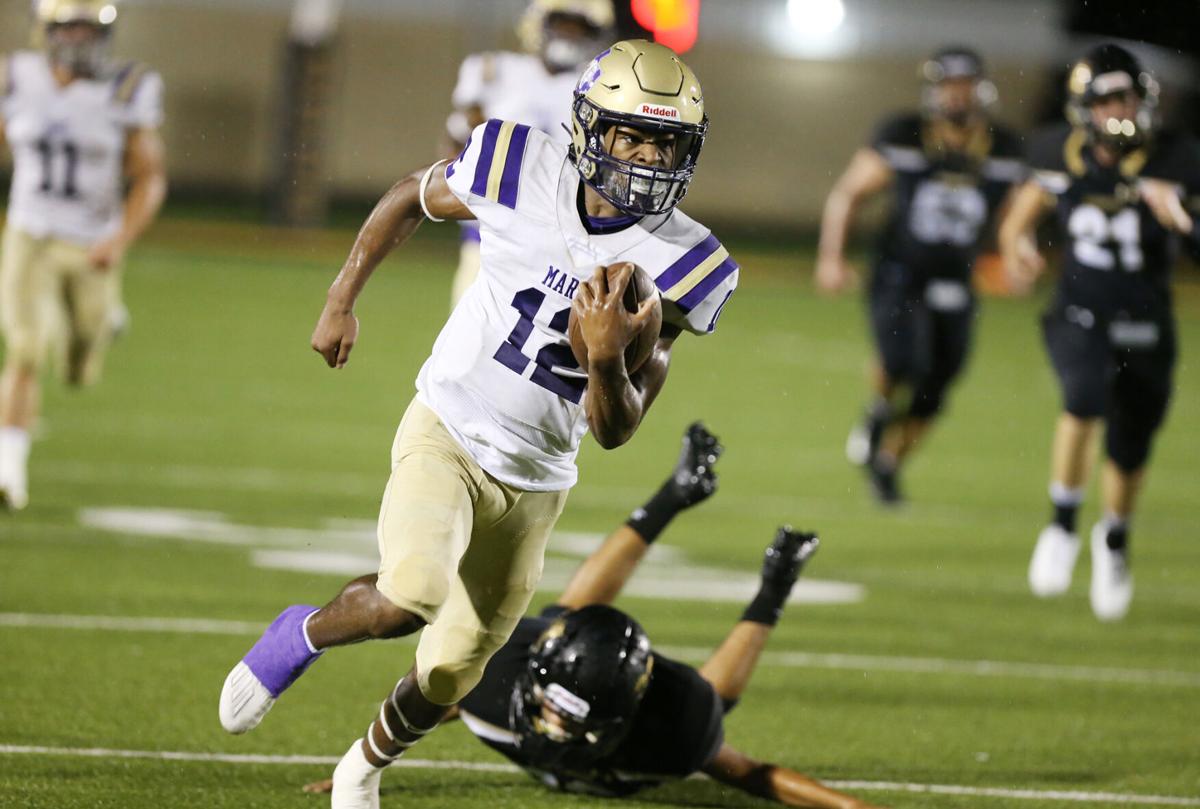 Mart’s Kei’Shawn Clater made a habit of running away from defenses the last three seasons.

Clater was a big-time playmaker at wide receiver during Mart’s run to state championship games in 2018, 2019 and 2020. His specialty was the jet sweep, a play that allowed him to show off blazing speed when he got to the edge. Once he turned the corner, defenses rarely caught him, if they ever did.

On the back of a horse, though, Clater is the pursuer, swinging a lasso and trying to beat the clock as a team roper.

“No run is the same in the practice pen or the roping pen,” Clater said. “Every series is different. Your steer could duck left, duck right, he could run, he could stop, he could run slow. It’s different every time.”

Central Texas high school football fans have known Clater’s name as a key contributor for the Mart Panthers for years. As a freshman, he scored on a 22-yard touchdown run in the Class 2A Division II state title win over Gruver. Since then, he’s been a problem for opposing defensive coordinators as they try to account for his speed.

The side of Clater’s personality fans don’t see is his calming demeanor outside of football.

Late in 2019, sometime after Mart won another state title with a 25-20 victory over Hamlin, Clater and his younger brother Bert decided to return to their roots. Kei’Shawn and Bert Clater grew up around horses, watching their father compete as a team roper and climbing on the backs of colts themselves.

Then, almost two years ago, they went to see a longtime friend, pro barrel racer and colt starter Traci Pratt, who lives a few blocks from Mart High School. Pratt’s house sits between pens where a small herd of good-looking quarter horses graze on hay and hang out in the shade.

“I’ve known the boys many, many years since they were little tikes,” Pratt said. “They went off and grew up a little bit and they started coming around a little bit in late 2019, early 2020. They expressed some interest of wanting to mess with horses.

“Kei’Shawn has a gift. He’s a very old soul in a young man’s body. He has a way of talking to the horses that most kids his age, especially in the beginning stages, aren’t capable of doing. Bert’s more of a cowboy and Kei’Shawn is the horseman.”

Kei’Shawn Clater and Pratt made a deal. If he worked with the animals both at her house and a ranch near Watt, she would get him his own horse to ride.

As it turned out, Clater’s skill led directly to him picking out his colt. One of the tasks he learned was to help halter break young horses that had never been ridden before. He picked out a young sorrel quarter horse and began earning its trust.

“Kei’Shawn can talk to them and they talk back to him,” Pratt said. “It’s really amazing to watch. We went to the ranch and picked up a three-year-old colt that had never been touched. Within five days he had him saddled and was on his back. That’s Moose. We gave him that colt and told him do a little bit of work around the ranch for us and he’s yours.”

When normal school life, as well as the sports world, shut down in 2020, it created an opportunity for Clater to fully embrace ranch life. Not only did he hone his skills as a horseman, he started working on a new craft.

With a lasso in his hand and a competitor’s determination, Clater started working as a team roper. First, he would practice on a dummy while standing on the ground. Then he progressed to roping from the back of a horse.

Being a rodeo cowboy means working on your own skills as well as those of your primary teammate — your horse.

Clater said he learned a lot about his own personality by working with Moose, and later a palomino quarter horse named Billy.

“Early on with Moose, when I was training him, we had a lot of problems,” Clater said. “We had a lot of box problems. When you’re going in the box and you’re ready to rope, you’re in the corner. He would just throw a fit. He wouldn’t go in the box, to be honest. When I would back him in, he would rear up. I had to work with him on it for the longest and he finally came around. I haven’t gotten to start the process with Billy.”

One of the reasons Billy’s training is on hold is because Clater is sidelined for the next couple of months.

After starting the season as Mart’s quarterback, Clater injured his right knee on a touchdown run against McGregor on Sept. 3. He had surgery to repair a torn ACL and slightly torn meniscus on Sept. 16. He has since begun physical therapy and could soon start walking without crutches again.

Clater hasn’t given up hope for this season. He’s working hard in rehab to give himself the best chance possible to get back in the game if Mart plays into December, as the Panthers have every fall since 2017.

Beyond high school, Clater’s ambition is to be a unique two-sport athlete — football in the fall and team roping in the spring. More than 10 Texas universities or junior colleges, including Texas A&M, Texas Tech, Sam Houston, Stephen F. Austin, Tarleton State and Cisco Junior College field both football and rodeo teams.

Clater’s knee is not quite ready to chase a steer on horseback, though he did spend a couple of hours riding this week. When the football season ends, his plan is to grab a teammate and enter team roping jackpot events to further his skills.

In team roping, one cowboy ropes the steer’s head first, then his partner ropes the hoof.

Pratt said having the Clater brothers around has brought new energy to her stables as well as the ranch where they all work. Kei’Shawn and Bert, along with Panthers teammate Fernando Alfaro, have all started team roping in the offseason.

But it’s more than a steady job and a pastime for Kei’Shawn Clater. It’s his dream to own his own ranch one day. For an athlete who has proven he can outmaneuver and outrun opposing defenses, this is his next rodeo.

Chilton, like most teams, needed to play nearly perfect to keep up with No. 1-ranked perennial power Mart. Unfortunately for the Pirates, they…

Mart senior Kei’Shawn Clater, who helped the Panthers reach the state championship game in 2018, 2019 and 2020, trained both his horses, Billy (left) and Moose. Along with being a horse trainer, Clater is working toward adding team roping as his second sport.

Mart’s Kei’Shawn Clater made a habit of running away from defenses the last three seasons.