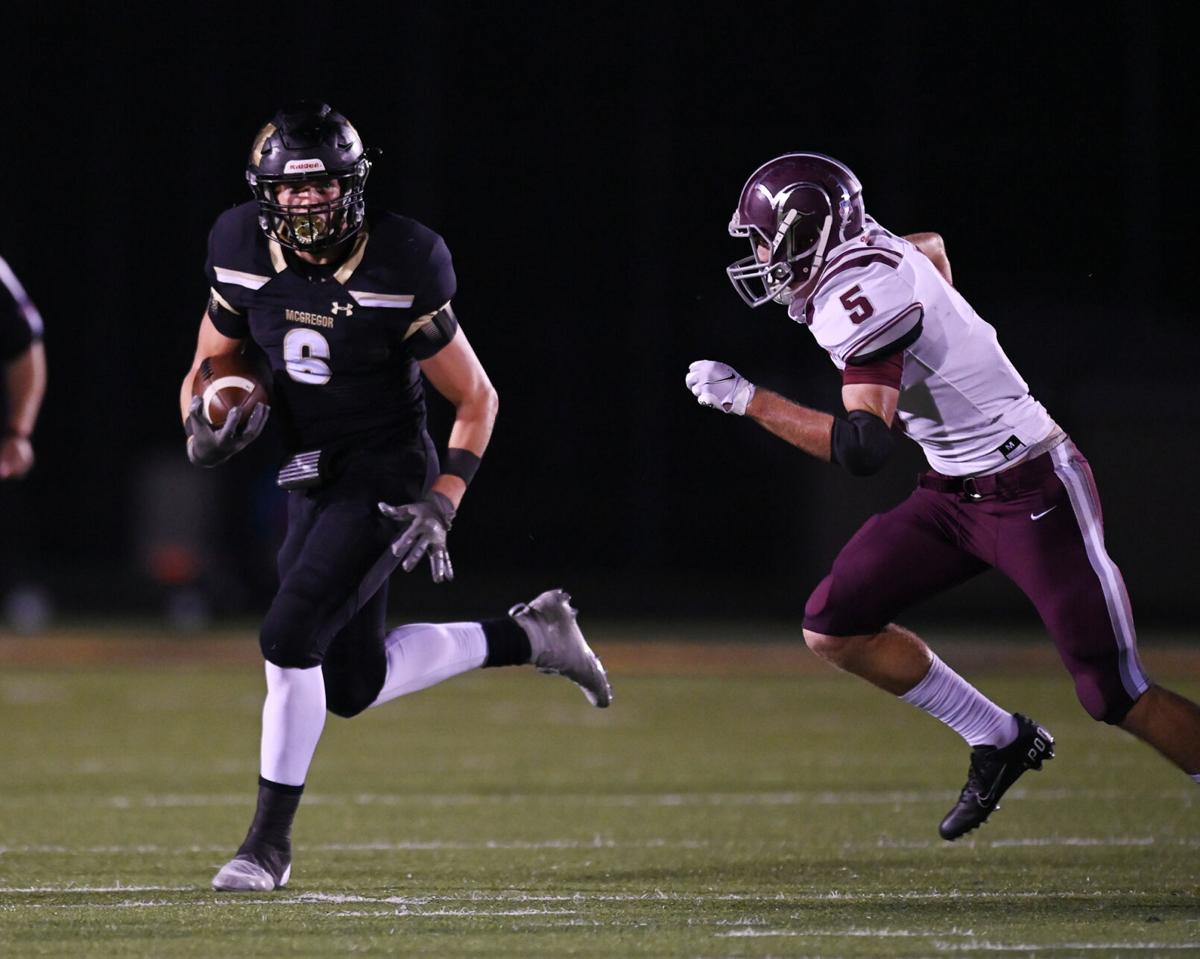 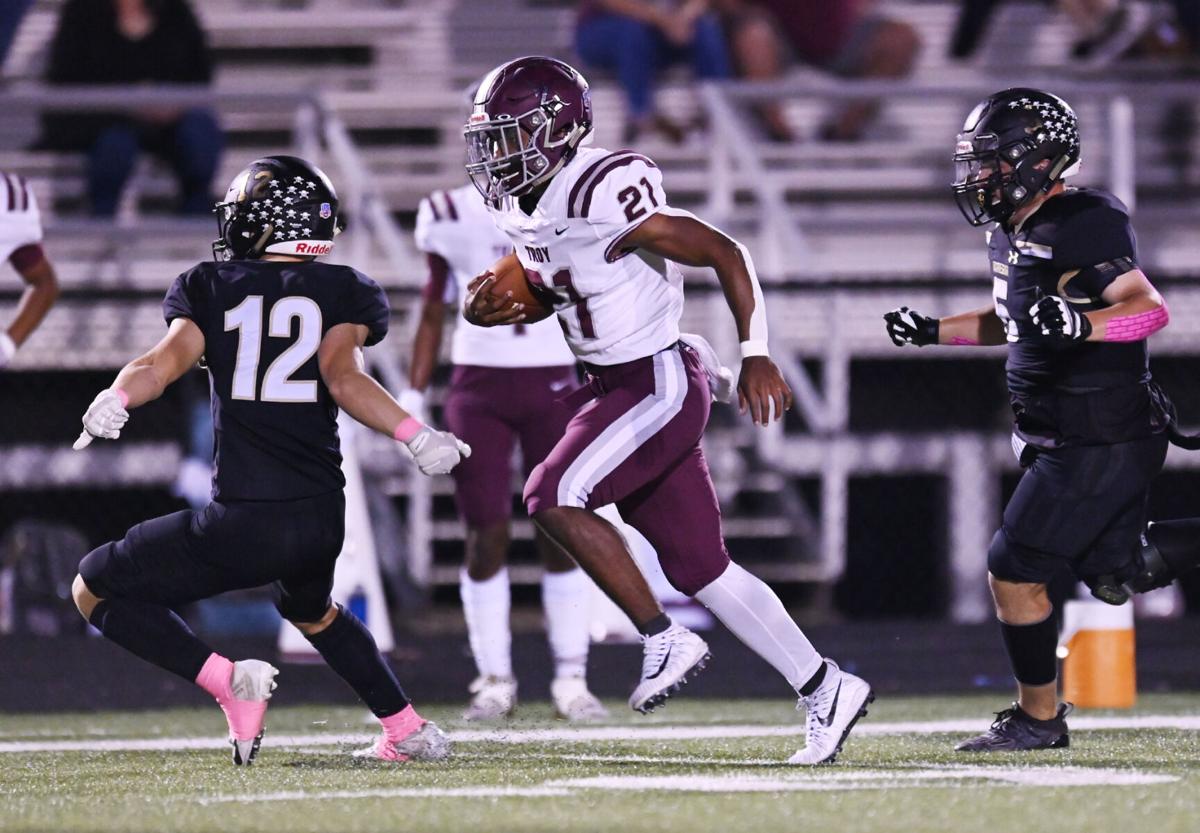 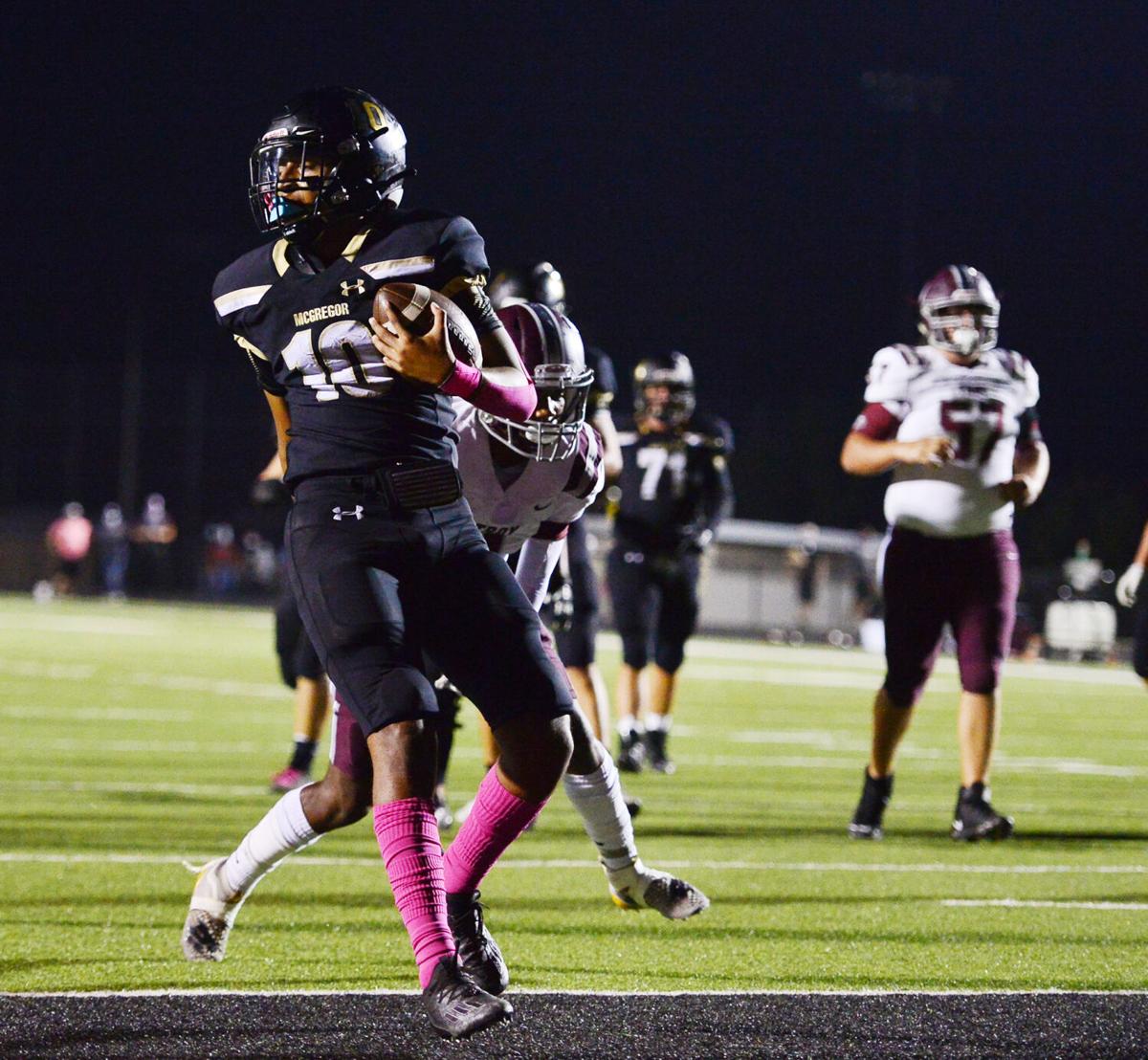 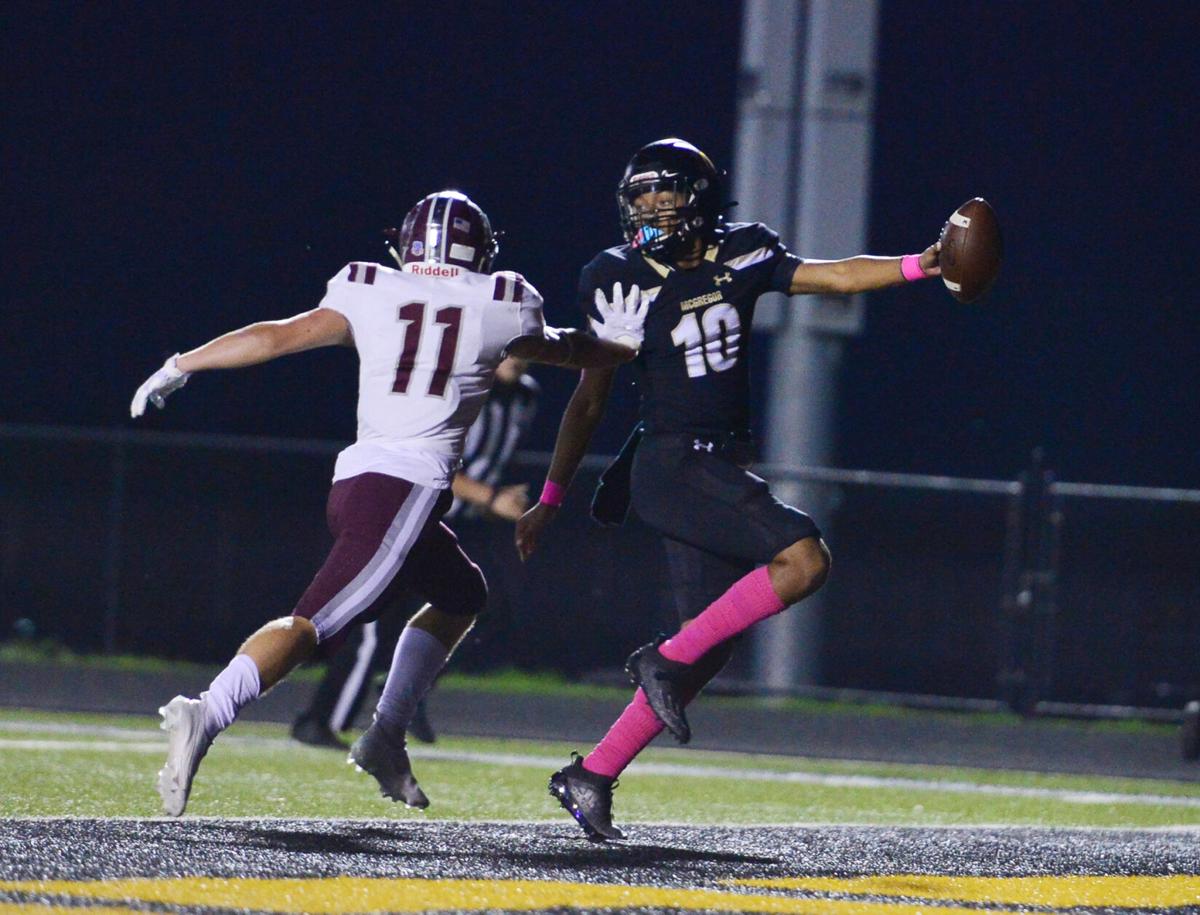 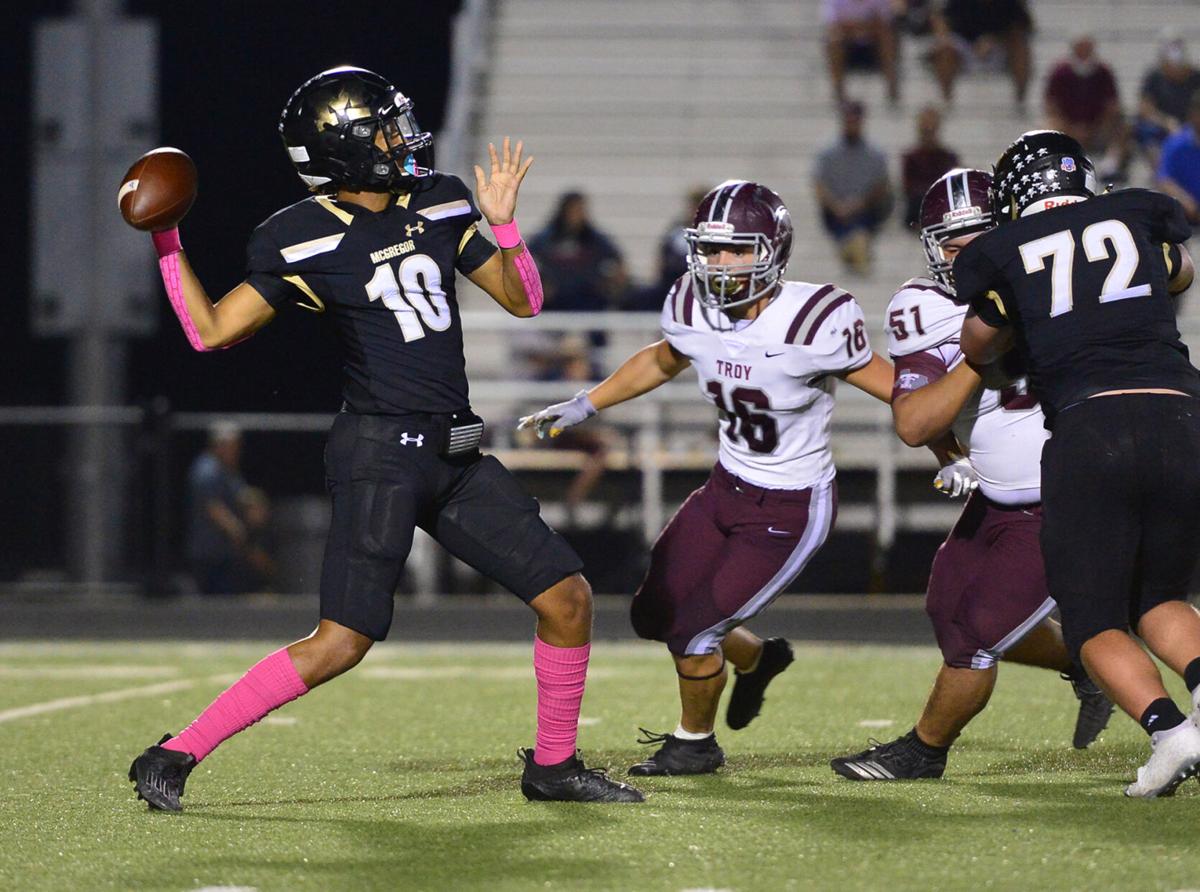 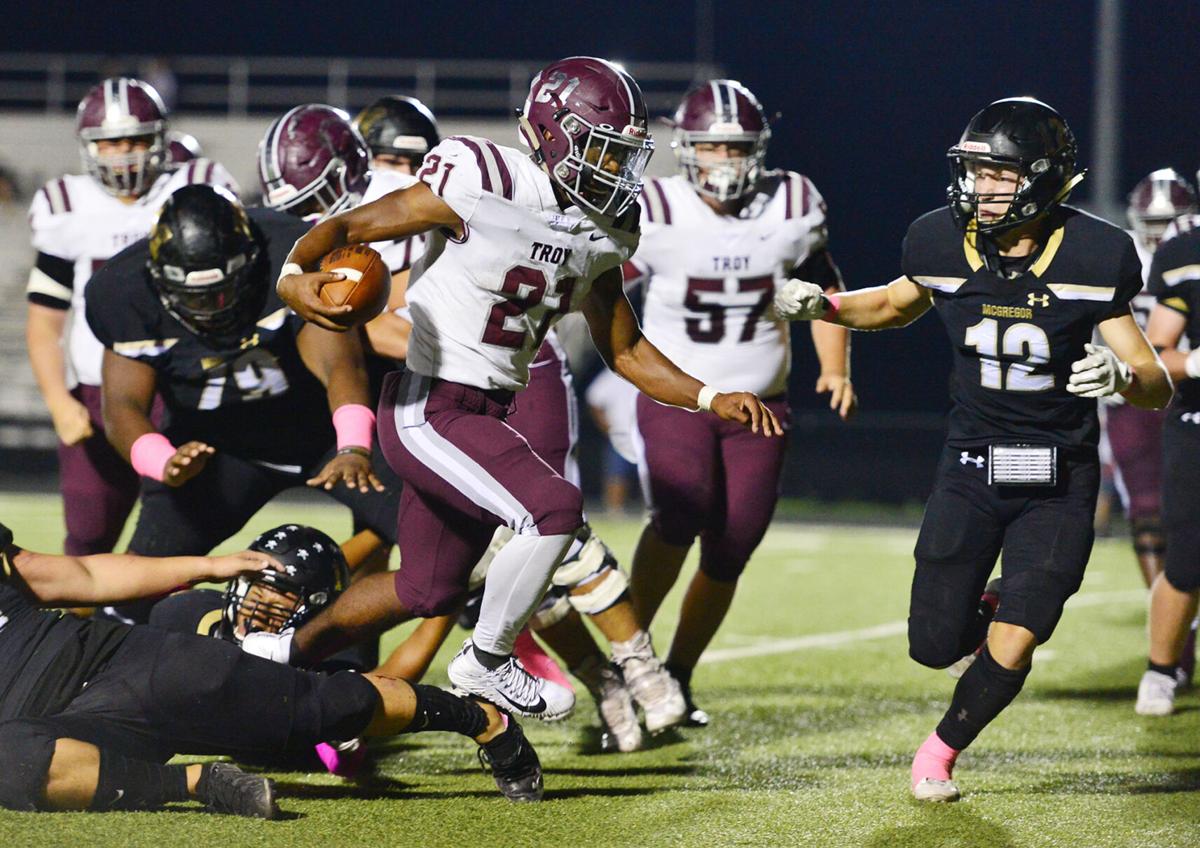 Troy's Zach Hrbacek (left) heads upfield while being defended by McGregor's Ashton Vining (right) in the first half.

Update: More to know about the McGregor-Troy thriller

McGREGOR — In an offensive showdown that lived up to its billing, the McGregor Bulldogs found a way to capture momentum in the fourth quarter and claim a huge District 11-3A Division I victory over Troy.

McGregor running back Chad Lorenz slashed through the Trojans defense for a 17-yard touchdown in the fourth quarter, then caught the crucial two-point-conversion pass from DeAndre McDaniel to lift the Bulldogs to a 58-57 win on Friday night on their home field.

But McGregor kept the ball out of his hands for large portions of the second half and wrapped him up just enough to win the game.

McGregor trailed 42-34 at halftime, but recovered an onside kick to start the third quarter and then pounced on another one after pushing ahead 58-57 with 11:27 left in the fourth.

Neither team scored in the game’s final 11 minutes. Troy (3-3, 1-1) ran just eight plays in that time after failing to recover the onside kick and giving up another fumble later in the period.

McDaniel snapped the ball on fourth-and-16 with six seconds remaining and scrambled to his right to run out the clock and allow the McGregor home fans to celebrate a big win.

The Bulldogs were crisp on offense as they marched 80 yards in four plays. McDaniel got the drive started with a 34-yard scamper and later finished it with a 10-yard touchdown run.

But Hrbacek warmed up fast as well.

Troy began its first drive of the night at its own 40. On his first touch of the contest, the Trojans star running back got through a seam in the right side of the line and raced 60 yards for a touchdown.

McGregor gave up a fumble in the first quarter and was forced to punt once in the second. But the Bulldogs scored on their other five possessions of the first half.

That wasn’t quite enough to keep pace with Troy.

Kadin Workman returned a kickoff 65 yards to tie the game at 14.

And of course, Hrbacek kept grinding. He went to the break with five touchdowns and 219 rushing yards.

Hrbacek raced to his left on a sweep and reached the ball out for the pilon for his fifth score of the game. That one put Troy ahead 42-34 going to halftime.

Lorenz rushed for 136 yards in the first half, including a 39-yard touchdown that knotted the score at 28.

A few minutes later, McDaniel hit Lorenz over the middle and the running back took it the rest of the way for a 62-yard score. However, the Bulldogs couldn’t connect on the two-point pass and Troy retained a 35-34 edge.

I ended up at a thriller on Friday night.

Troy's Zach Hrbacek (left) heads upfield while being defended by McGregor's Ashton Vining (right) in the first half.