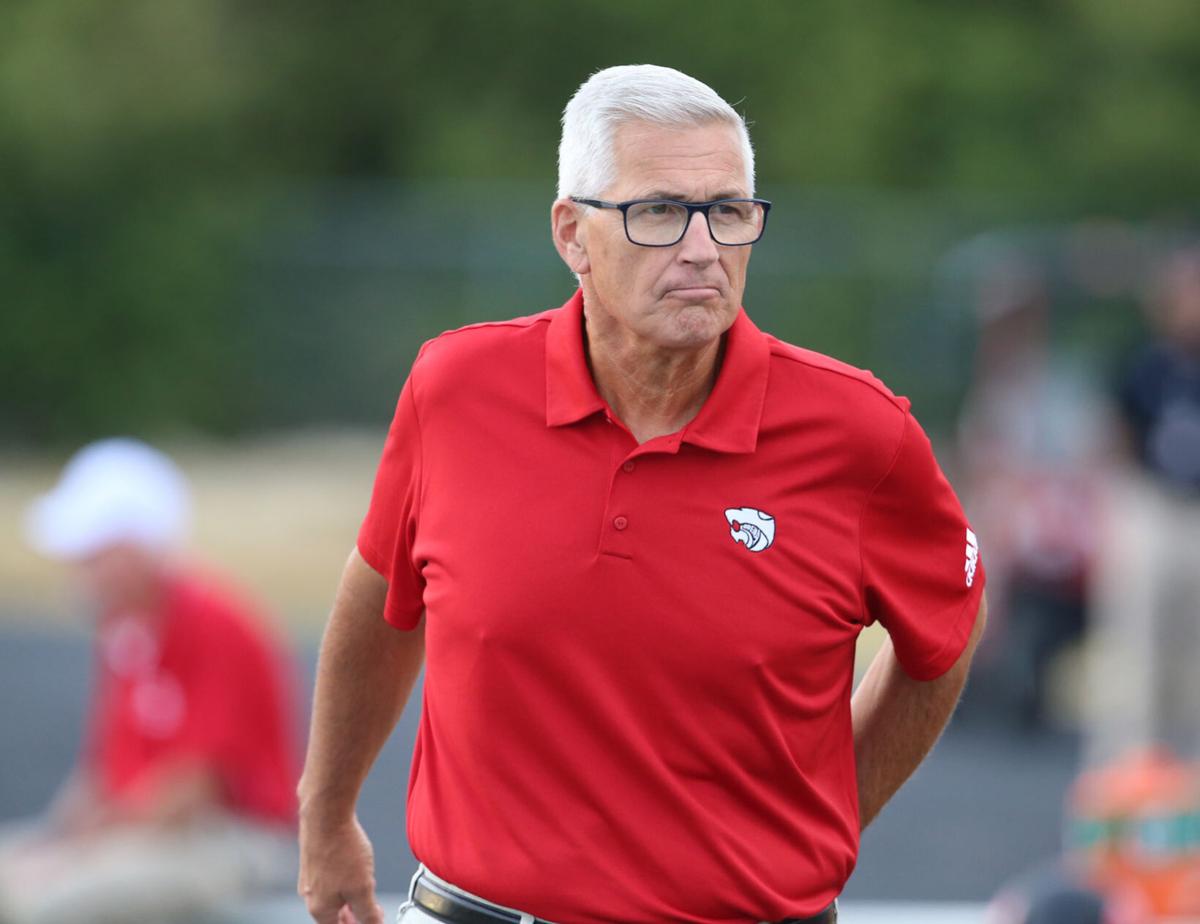 Lorena coach Ray Biles said it’s been frustrating to deal with the fallout from the McLennan County Health District’s decision to delay in-person school activities, which will push the Leopards’ season opener to the first weekend in October. 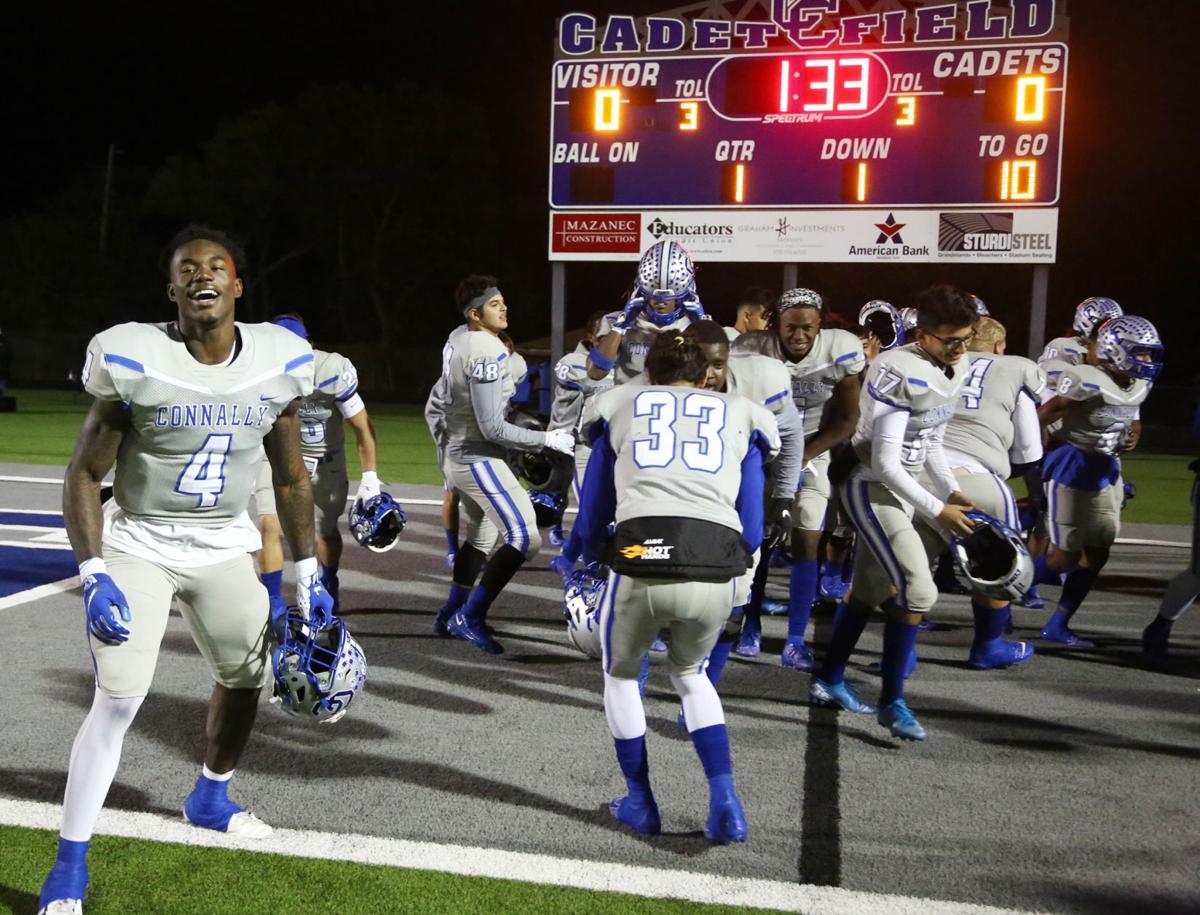 Connally takes the field before a game against Fairfield last season. Due to the McLennan County Public Health District’s order, the Cadets won’t be able to start practice until Sept. 7, more than a month after their district opponents, and will have to play a truncated season.

It appears that no change is coming to the Waco-McLennan County Public Health District’s order to delay in-person school classes, activities and sports until Sept. 7, and area coaches remain frustrated and angry.

Waco-area superintendents met with Dr. Farley Verner, the medical authority for the health district, via Zoom for around an hour on Monday. But nothing arose from that meeting that would indicate a change to the health district’s timetable to delay in-person classes and extracurricular activities in the wake of the COVID-19 pandemic.

“I was not at the majority of the meeting. I was in a staff meeting with my coaches and I got a text from my (superintendent) saying, “It ain’t looking good, this dude ain’t budging,” said Shane Anderson, athletic director and head football coach at Connally.

Anderson said he sat in on the final 15 minutes of Monday’s meeting, which dealt with the general school day and did not address extracurricular activities. “At one point, a superintendent asked (Verner), ‘Do you see a change that would allow schools to start before Sept. 7?’ and he said, ‘No,’” Anderson said.

Last Tuesday, the UIL unveiled a plan to allow the state’s largest two classifications (Class 6A and 5A) to delay sports until September while permitting schools in Classes 4A and smaller to start on schedule, including beginning football practices on Aug. 3. However, later that same day the health district overturned that schedule for McLennan County’s 1A-4A schools with its ruling.

Local coaches greeted that order with confusion and outrage. They said that it created a scheduling mess and put them at a competitive disadvantage, considering that schools within their UIL district but outside of McLennan County could get started practicing and playing games weeks ahead of them.

“For our kids, we’ll get six games at the most,” Connally’s Anderson said. “When we line up for our second district game against Salado, they’ll be in Game 7 and we’ll be in Game 3. I don’t care who you are, but that’s not fair.”

Added Lorena’s Ray Biles, “Honestly, we’re missing 25 practices and four games that our district opponents are getting. So, we’re going to walk into a stadium on Oct. 2 and look midseason form?”

McGregor athletic director/head football coach Mike Shields said that the most perplexing part of the health district’s delay order is that it didn’t take into account how athletic departments in the county were already managing in-person strength and conditioning workouts.

“It is (frustrating). Believe me, I understand, because we’re all in it for the safety of the kids,” Shields said. “We’ve done a really good job during the summer of keeping people spread out. We haven’t had many cases as far as student-athletes. If you add up all the schools, I think they said there’s over 2,200 kids and we’ve only had a handful of cases. It really hasn’t spread. So what UIL set up for us is really working on our end.”

Last week Verner noted that McLennan County had experienced a “dramatic increase in community spread” of COVID-19, which led to the delay order.

But area coaches said they’re not seeing high numbers of cases within their own teams. They expressed their frustrations over the order to McLennan County Commissioner Ben Perry last week. Monday’s meeting offered the chance for local superintendents to take up the fight. But it seems that nothing is likely to change.

“We’ve done everything we’ve been asked to do health-wise as far as spacing, masks, sanitizing stations, all the rest of it. Only thing we’re getting out of it here is zero,” Lorena’s Biles said.

Coaches said they’re unsure of what avenue to pursue next. Connally’s Anderson said that they’ve even discussed starting practice as originally scheduled on Aug. 3 and just dealing with the fallout, but he added that he’s not sure if it would be a productive use of their time. Nevertheless, he said that it’s time for McLennan County coaches to unite and “put their dukes up” to fight for the best interests of their student-athletes.

“I’m to the point where I would deal with the consequences, if it helps the kids in McLennan County,” Anderson said. “That’s where I’m at, short of it taking away food off my table, I’m to the point where I’ll take a ticket, take me to jail if it’ll make a difference. I’m all for that, and everybody I’ve talked to seems to feel the same way.”

McGregor’s Shields said that the District 11-3A executive committee – a district that includes McGregor and Lorena within the county and Cameron Yoe, Caldwell, Rockdale, Academy and Troy outside of it – is hoping to get a waiver from the UIL in how they approach their first practices. Normally, they’d have to spend a week of strength and conditioning when they first return, but Shields hopes that McGregor and Lorena could at least get straight to football practice once Sept. 7 arrives.

“What we’re doing now is trying to figure out a way to get our district schedule in. With a seven-team district, that’s not real easy,” Jacobs said.

Several coaches also expressed disgust that AAU and other select/travel ball teams in the area have continued to practice and hold tournaments, while schools who were already following the UIL’s social distancing guidelines for workouts are out of luck.

“Here’s the frustrating thing for me – we’re trying to do things correctly, and I’ll drive home today and I’ll go by these other places and there’s no social distancing,” Lorena’s Biles said. “These select teams, they’re having tournaments and the county says they can’t do anything about that. They don’t have any jurisdiction over that. But we have guidelines in place that we’re trying to follow, we’re trying to take care of our kids, because the other thing is, if those kids aren’t here, are they out there practicing social distancing? It’s a crock from that standpoint.”

The delays haven’t been easy on the students, coaches said. McGregor’s Shields said he’s been preaching mental toughness to his athletes, but he compared the fluidity of the situation to a roller coaster. Crawford’s Jacobs also used that analogy.

“It’s tough, and it’s frustrating to the kids. One day you’re fired up and ready to go and three hours later you get told, ‘Ah, we’ve got to shut down.’ It’s up and down, up and down,” Jacobs said.

Connally’s Anderson said that even if he grumbles to his superintendent or fellow coaches, he can’t bring that same message to his players.

“As a coach, you have to look at things from your kids’ sake,” Anderson said. “Behind closed doors we might say one thing, but I can’t show any of that negativity toward my kids. We always talk to them about making the most of the hand you’re dealt – of adapt, improvise, overcome. That’ll still be the approach with the kids.

“My message is going to be, ‘Hey, we’re going to have more tread on our tires than everybody else.’ You just have to attack it with that positive mindset, but just know that behind closed doors we’ve had every communication imaginable.”

Local athletic directors and coaches voiced their concerns on Wednesday about the delayed start for in-person education, including fall sports.

UIL delays 5A and 6A, gives all other schools green light to start

Central Texas athletic directors and coaches shifted from a holding pattern to developing a new plan on Tuesday.

Lorena coach Ray Biles said it’s been frustrating to deal with the fallout from the McLennan County Health District’s decision to delay in-person school activities, which will push the Leopards’ season opener to the first weekend in October.

Connally takes the field before a game against Fairfield last season. Due to the McLennan County Public Health District’s order, the Cadets won’t be able to start practice until Sept. 7, more than a month after their district opponents, and will have to play a truncated season.