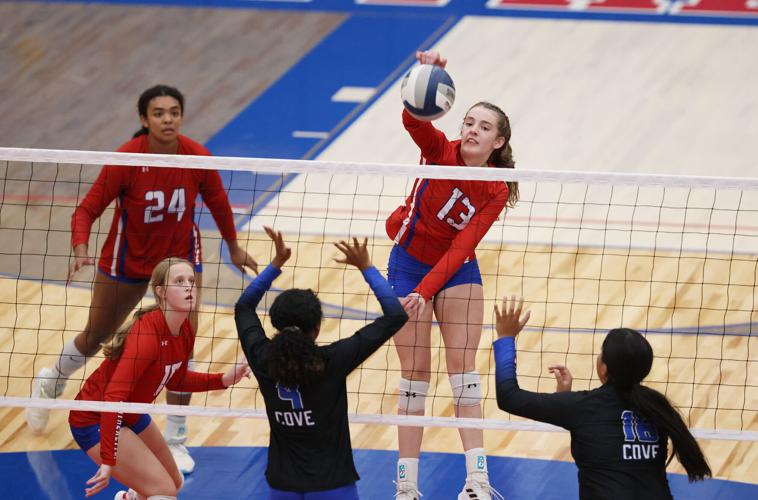 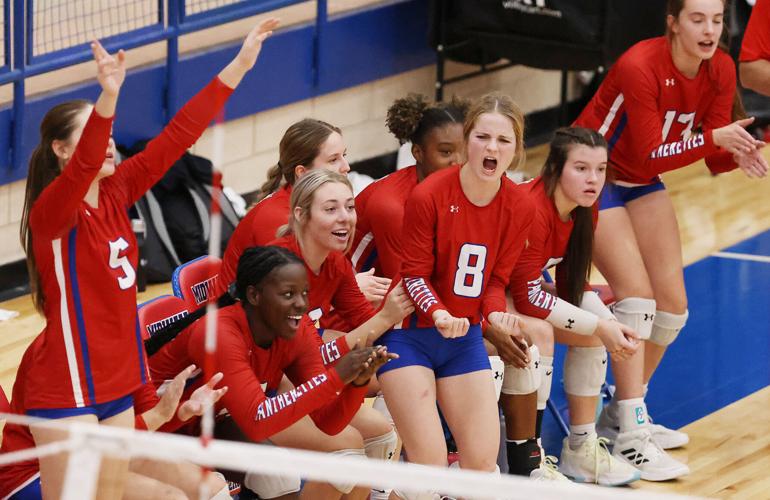 Midway players react to a score. The Pantherettes improved to 3-0 in District 12-6A play with the win. 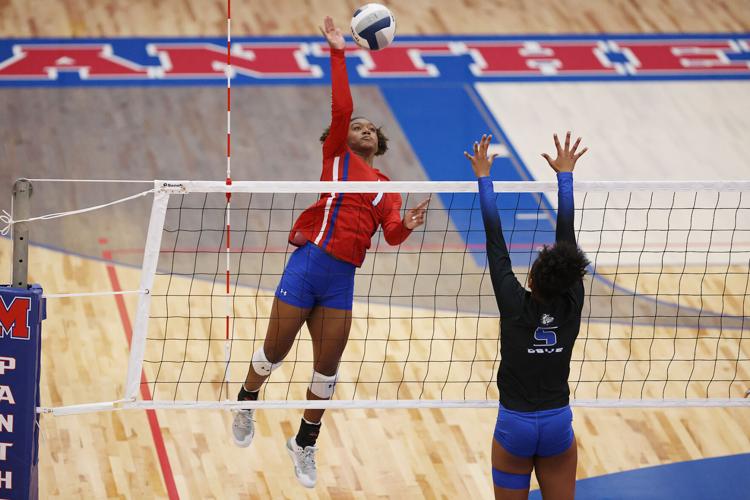 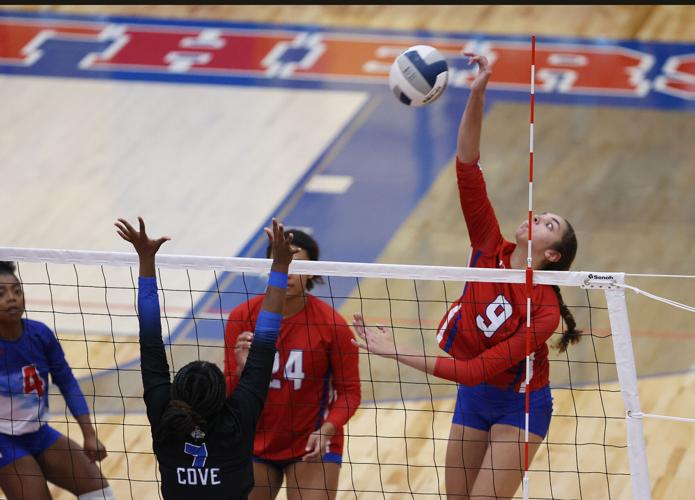 The way they’re going, it would be hard to draw up a scouting report on the Midway volleyball team.

With this pack of Pantherettes (27-10 overall, 3-0 district), if the left one doesn’t get ya, the right one will. Or maybe the middle. Really, they’re more like octopi, with arms coming at opponents from every direction.

“It’s hard to scout us. Who are you going to go stop?” Midway coach Ryan Porter said. “Pick one of these amazing kids. We’re just deep. The kids that are on the bench would be starting on anyone else’s varsity on any given day.”

Porter said it’s “one of the deepest teams we’ve ever coached,” and that’s high praise considering he once led a Midway team that earned a No. 1 state ranking and produced four Division I signees that season.

Midway demonstrated that existential philosophy-level of depth against Cove (22-11, 2-2), which brought a typically feisty and athletic squad into town. After the Lady Bulldawgs captured the first two points of the match, the Pantherettes punched their way to an 8-0 run, as their murderer’s-row lineup of heavy hitters began to find a groove.

With that many options, what’s a setter to do?

Well, for Midway’s Cambry Saul, there are usually no wrong answers.

“Most of the time I base it off the middle block on the other side,” said Saul, who finished with 31 assists. “So, wherever they’re going toward, I’ll go the other way, or whoever’s on that night and doing well, then I’ll set them and give them the ball as much as I can. I’ve just got to spread it out so no one expects where it’s going.”

Of course, it helps when the back-row passes come out clean to Saul, giving her space and time to survey her options. Midway’s dig patrol is led by sophomore libero Jade Washington, last year’s Super Centex Newcomer of the Year. Washington is willing and able to make the sprawling, layout save, but more often than not she just steadily stands back there and scoops up missiles before redirecting soft passes back to the net without missing a beat.

“She makes it very easy,” Saul said of Washington. “It’s nice, because she’s a leader on the back row, and it helps a lot. She helps lead everyone else and make them do well as well.”

Added Midway assistant coach Shannon Strumlauf, “Jade makes it extremely easy. She flies around, puts the ball right on the money. It does make our offense run very smooth.”

With Saul at the service line, Midway kept the hammer down in the second set, opening on a 7-0 run and forcing a quick Cove timeout. That regroup session temporarily slowed Midway’s momentum — in that the Lady Bulldawgs scored — but the Pantherettes’ array of options kept Cove on its heels. Whether it was Williams or McKenzie chopping away from the left side, Smith soaring from the opposite pin, or Rigney bringing the high heat down the middle, it made it hard for the Lady Bulldawgs to dig their way out.

Led by some stiff blocking from Iliana Buitron and Chloe Tuiasosopo, Cove kept things tighter for the first 15 points or so of the third set. Porter rotated in his reserves to give everyone a touch, so it sometimes took a beat for the new-to-the-floor Pantherettes to find the rhythm. But Midway’s power eventually won out, as evidenced by a late swat from Bailey Jones that perfectly deflected off the Cove blockers for the point.

Midway’s roster features six seniors who are seasoned varsity veterans, and those leaders have successfully established a culture of selflessness, the coaches said. “It’s just a really tight-knit group that plays for each other,” Strumlauf said.

And, naturally, they want to extend this ride as long as humanly possible.

“We talk about that a lot,” said Saul, one of those seniors. “We want to make this year very special for us, we want to go far in the playoffs and just have a fun year altogether. That’s why we’re so close as a team, too.”

It’s a nice way to close out the nondistrict portion of the schedule, as the Lady Hornets (12-14) will open up district against Robinson on Friday.

VALLEY MILLS — The Eagles are flying so high, you won’t even be able to see them pretty soon.

Valley Mills extended its record to 28-1 on the season with a sweep of Frost. The Lady Eagles have won 22 in a row and have dropped only seven sets all season in the process.

They’ll open up District 15-2A action at Bosqueville on Friday.

The Lady Cougars pocketed the sweep of visiting Lago Vista, 25-15, 25-20, 25-19, to close out the nondistrict portion of their schedule in style.

China Spring (14-15) certainly challenged itself with its schedule, including a match against Class 6A Midway last Friday, won by the Pantherettes, 3-0. But Melissa Cole’s team should be battle-tested as District 23-4A competition gets rolling, beginning with a match at Connally on Friday.

McGREGOR — It was a must-win game for both Troy and McGregor but it was the Trojans who took home the win on a field goal, 27-24.

Brice Cherry: When we pick against your favorite school, it's nothing personal

A number of years ago, a story was shared with me. I can’t necessarily vouch for its validity, but I trusted the source and it sounded plausib…

Lorena steps up, past Academy for crucial district win

LITTLE RIVER-ACADEMY — The defending Class 3A Division I state champions raised their hands on Friday night.

Midway players react to a score. The Pantherettes improved to 3-0 in District 12-6A play with the win.