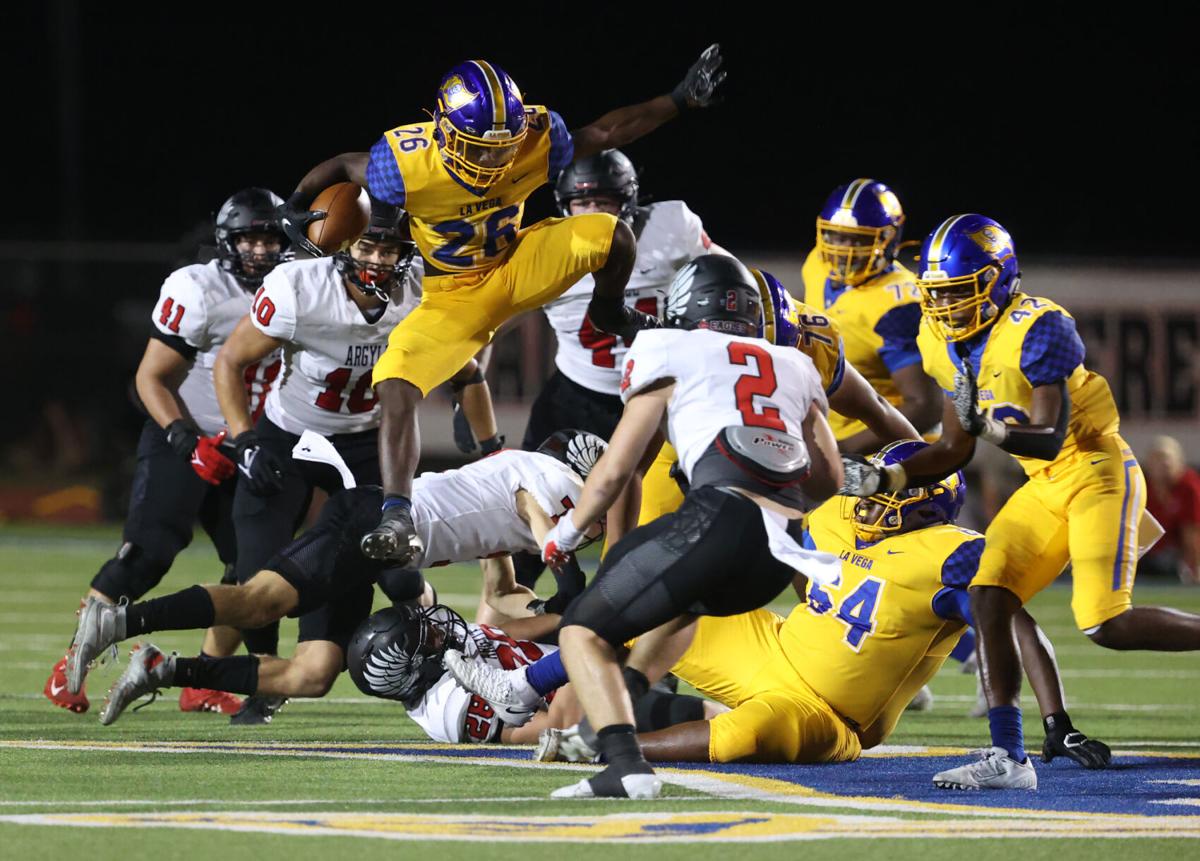 La Vega running back Bryson Roland hurdles over Argyle’s defense in the second half. 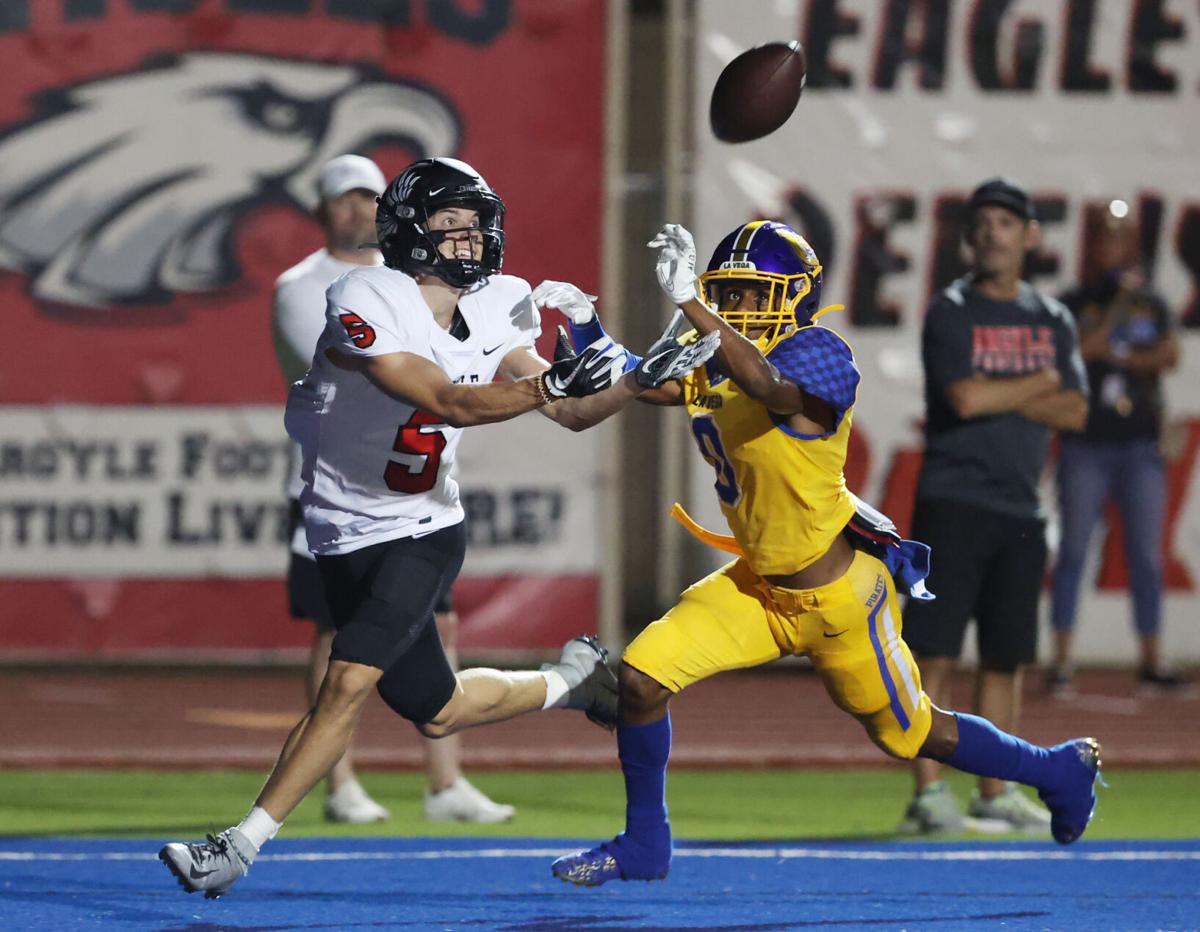 La Vega’s Jesse Majors-Sterling breaks up a potential touchdown pass intended for Argyle’s Hayden Stewart in the first half.

There’s no doubt that the No. 1 Argyle Eagles and No. 7 La Vega Pirates are contenders for the heavyweight crown in Class 4A Division I.

On Friday night, they squared off like a pair of prime time fighters in a matchup that lived up to the billing.

Argyle landed the last punch in a furious fourth-quarter flurry as the Eagles claimed a 17-14 victory over La Vega at Willie Williams Stadium.

La Vega appeared to have swung momentum distinctly in its favor when quarterback Robert Prescott went deep against the Eagles defense and found wide receiver Stephon Nickerson open in the middle of the field. Nickerson caught the pass in stride, then outran the Argyle secondary to the end zone.

Nickerson’s 81-yard touchdown catch from Prescott put La Vega ahead 14-10 with 10:34 left in the fourth quarter.

“We’re trying to take what they gave us,” La Vega coach Don Hyde said. “They’re crowding the box and we threw it over the top of them.”

The play brought the Pirate fans to life as Modoc cheers sprang forth from the stands.

But the Eagles had an answer.

Argyle return man Jaamael Felton fielded the ensuing kickoff at the 15-yard line, near the La Vega sideline. Felton found running room in front of him before crossing the middle of the field toward his own team’s sideline. The Eagles returner eluded the La Vega coverage squad and then turned south and outran the Pirates for an 85-yard touchdown.

Just like that, top-ranked Argyle was back in front with 10:20 remaining.

The Eagles (4-0) shut out Celina last week and their defense gave a strong effort again versus La Vega.

Argyle forced the Pirates to go three-and-out on their final three possessions of the fourth quarter.

La Vega’s defense was equal to the task most of the night. The Pirates surrendered just one offensive touchdown to an Eagles bunch that came in scoring 43 points per game.

“That’s a good offense. They put you in a bind in a lot of ways,” Hyde said. “We’ve got pretty good corners. That’s the one thing we’ve got this year that gives us an edge in the run game because we don’t have to commit extra people to the pass.”

Hyde was encouraged that his team didn’t back down from the fight. Nor should they. La Vega and Argyle have now met seven times in the last four seasons. The Pirates have a pair of playoff wins in that run, but they’re still looking for a regular-season win against the Eagles.

La Vega (2-2) has now lost in back-to-back weeks against state-ranked foes after falling to No. 4 Austin LBJ a week ago. But Hyde isn’t flinching.

“These first five games mean absolutely nothing,” Hyde said. “I’ll get criticized for saying that. But in the grand scheme of things what matters is getting better every week, so when you play the games that do matter, you’re pretty good.”

Argyle used its passing attack sparingly in the first half, but the Eagles made a big play through the air to get in position for their initial points.

Quarterback Jacob Robinson went deep down the left side sideline where Jett Copeland hauled in a 41-yard pass at the Pirates’ 9.

Pirates’ returner Mekhi Rice fielded the Eagles’ ensuing kick at his own 2. Instead of heading to the middle of the field, Rice stuck to the sideline and simply ran past the Argyle coverage. He was in the end zone 98 yards later. Rice’s answer put La Vega ahead, 7-3, and the Pirates maintained that advantage into the second quarter.

But Argyle turned a takeaway into points midway through the first half. Eagles linebacker Ethan Gonzales recovered a Pirate fumble on the second play of the second quarter, stopping a La Vega drive into Argyle territory.

The Eagles’ offense responded to the takeaway by methodically marching toward the La Vega end zone. It took Argyle 10 plays, mostly putting the ball in the hands of running backs Landon Farris and Peyton Shoemake, to get to the Pirates’ 16. La Vega forced the Eagles backward from there and appeared to have squashed the drive when Argyle faced fourth-and-20 from the 26.

That’s when the top-ranked Eagles caught a break as Farris sneaked out of the backfield and was all alone when Robinson found him 15 yards down field. Farris caught the pass and breezed in for the 26-yard touchdown.

With that, Argyle retook the lead,10-7, and it held that advantage when the bands played at halftime.

La Vega running back Bryson Roland hurdles over Argyle’s defense in the second half. 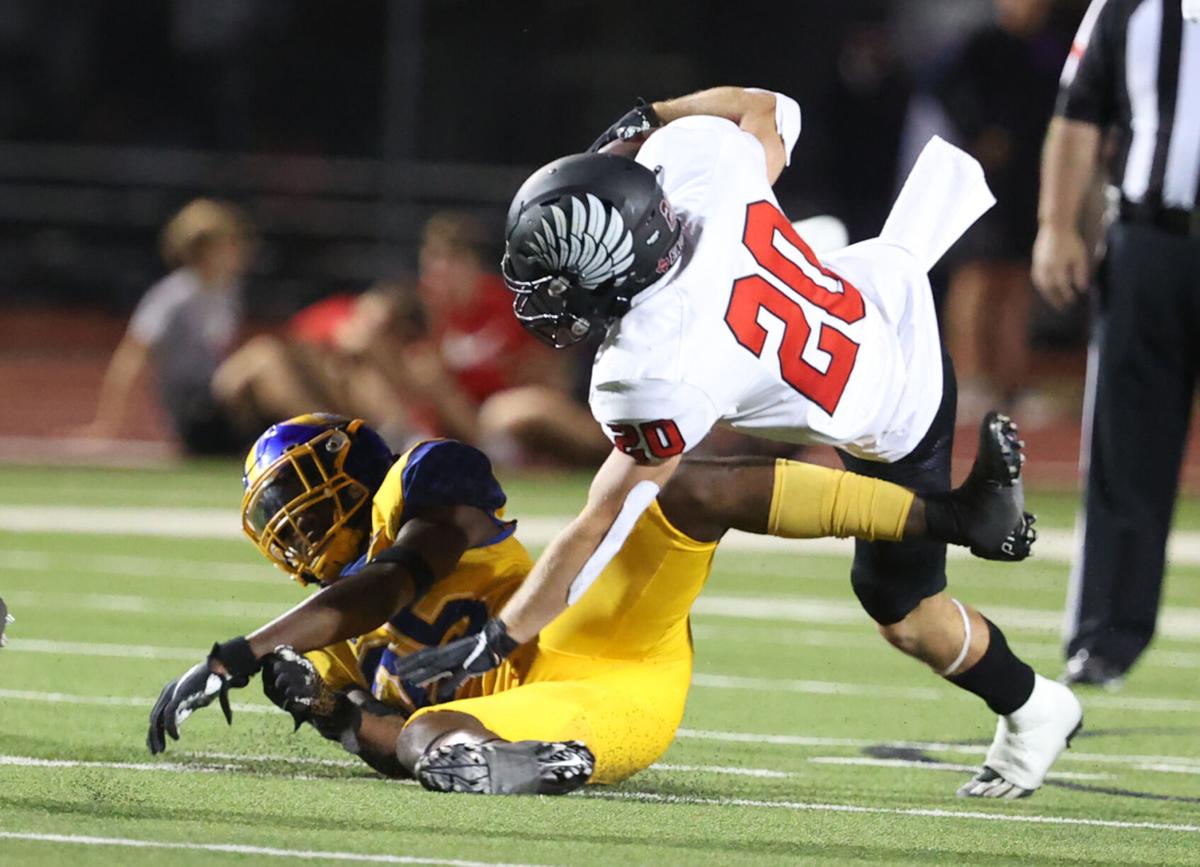 La Vega’s Darion White brings down Argyle running back Landon Ferris behind the line of scrimmage in the first half. 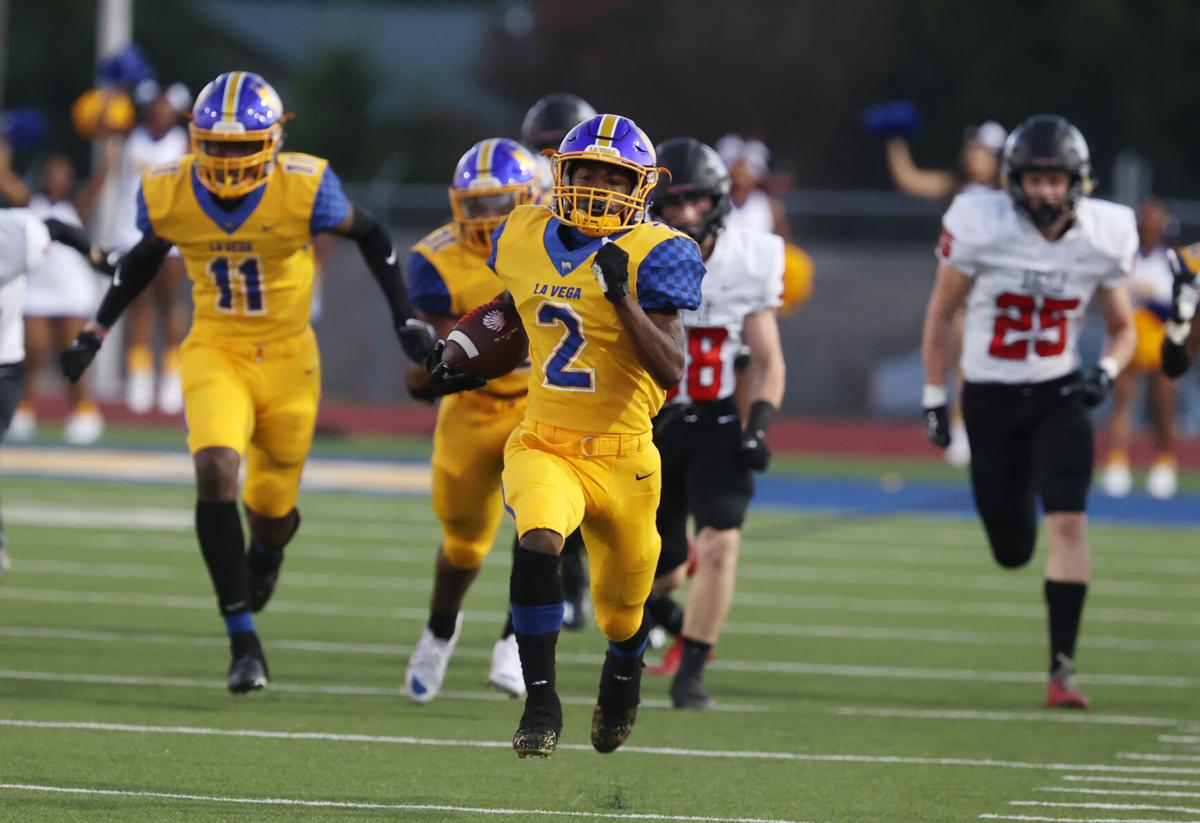 La Vega’s Mekhi Rice sprints down the sideline for a 98-yard touchdown on a kickoff return to put the Pirates up 7-3 over Argyle in the first half. 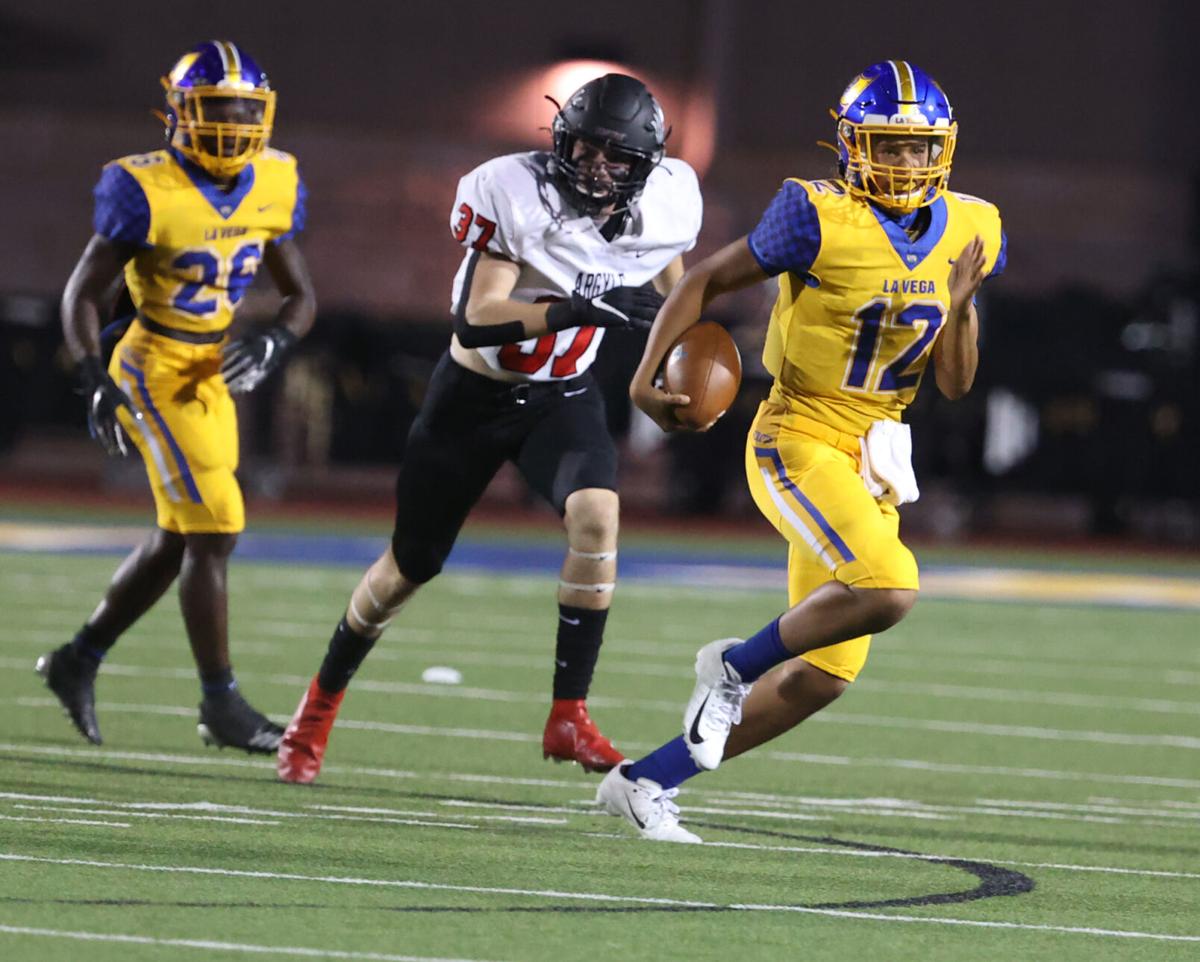 La Vega quarterback Robert Prescott escapes the pocket for a big gain against Argyle in the first half.

La Vega’s Jesse Majors-Sterling breaks up a potential touchdown pass intended for Argyle’s Hayden Stewart in the first half. 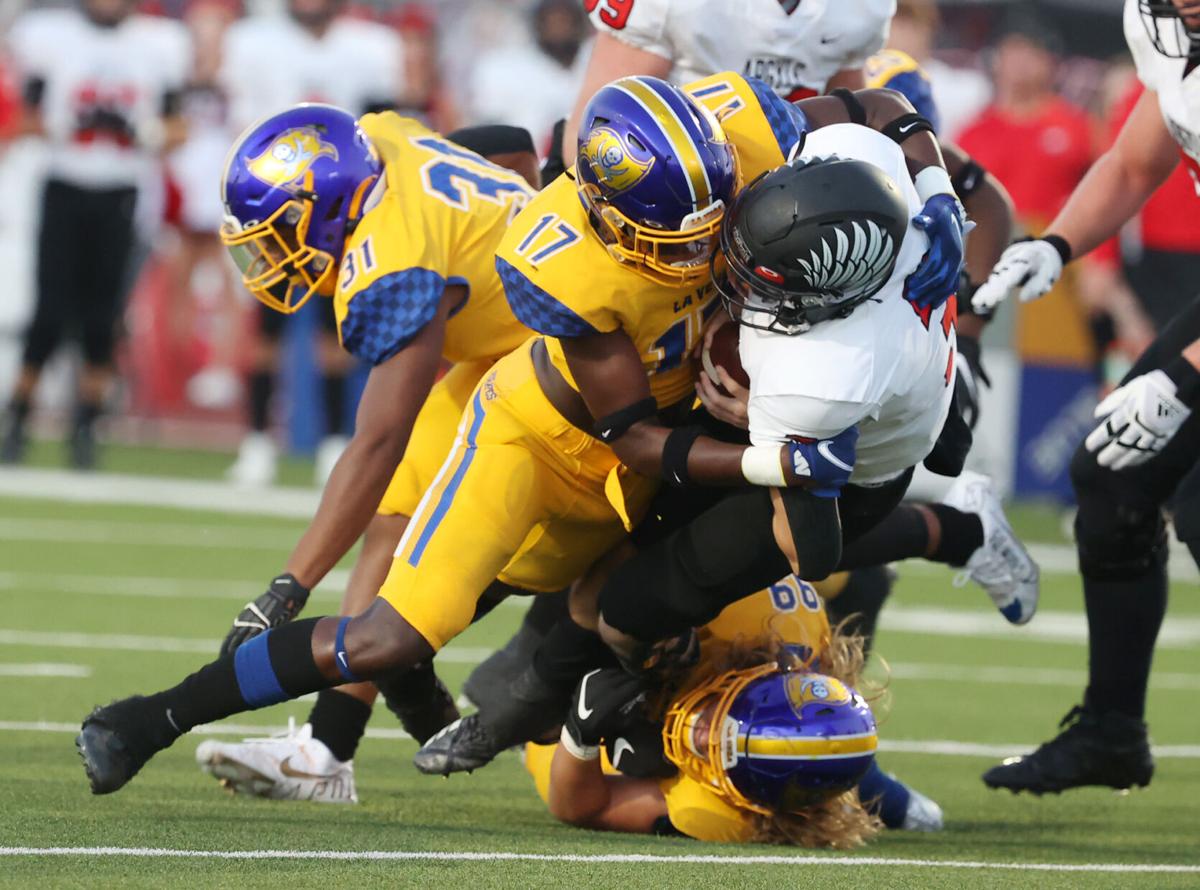 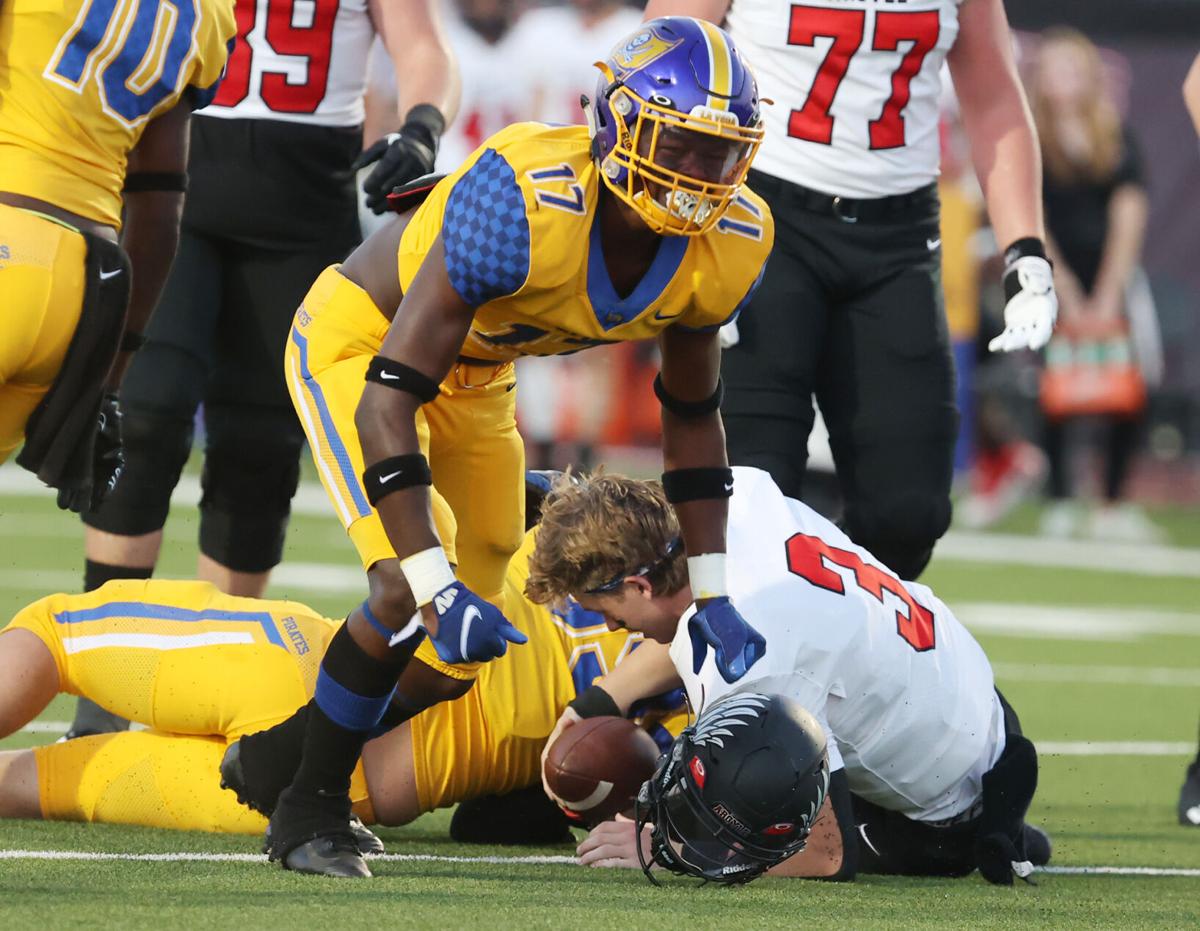 La Vega’s David McKnight celebrates his sack of Argyle quarterback Jacob Robinson in the first half.