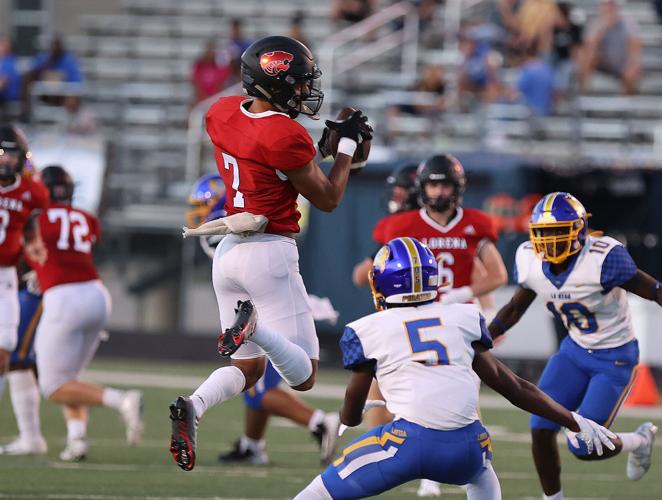 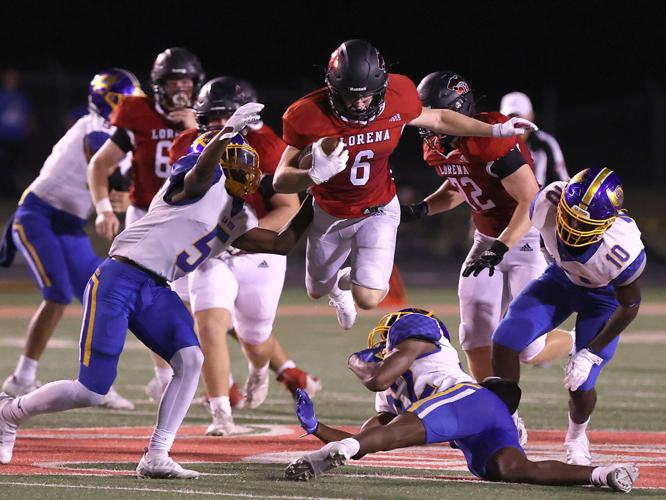 Lorena’s Kasen Taylor is tripped up by La Vega’s Mecca Walker after a gain Friday. 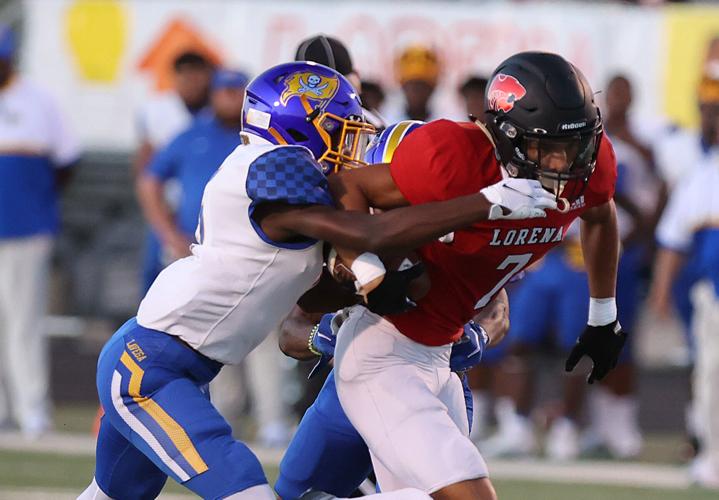 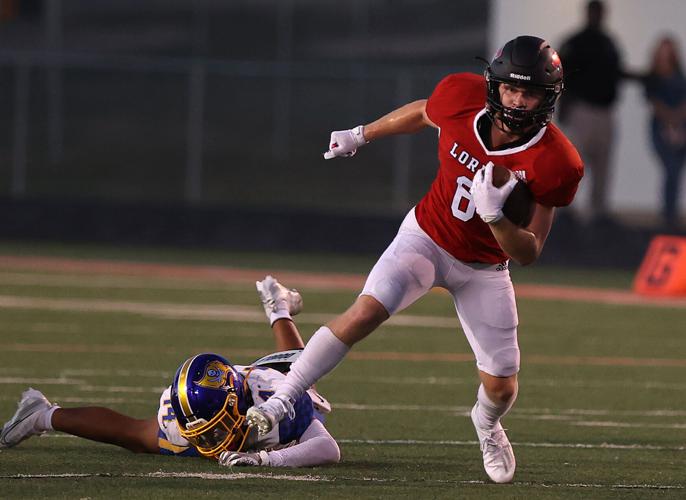 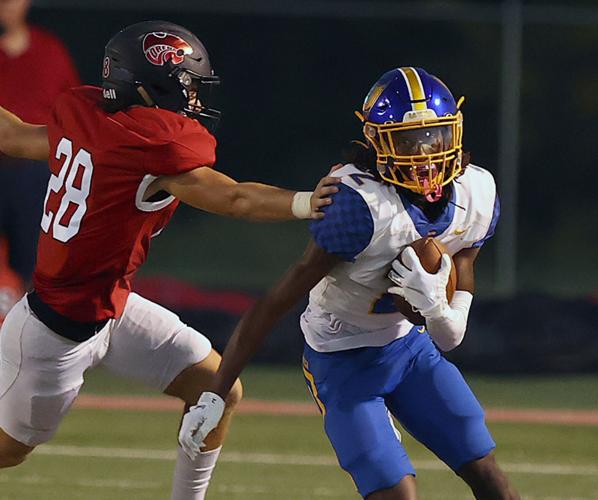 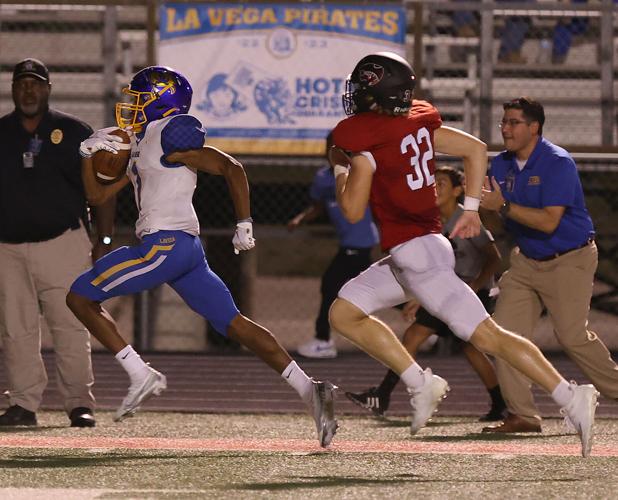 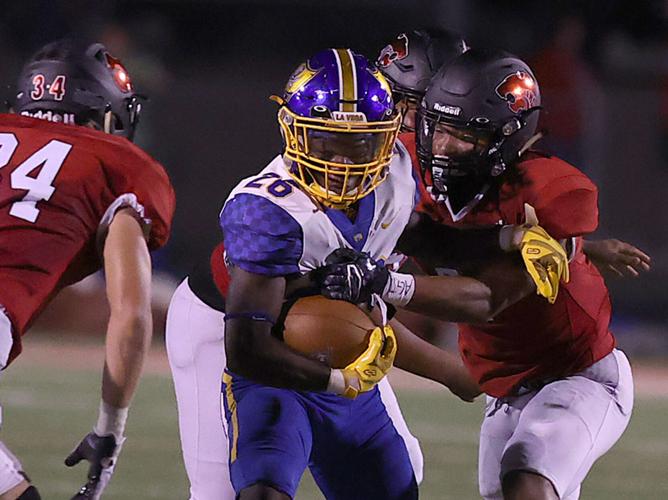 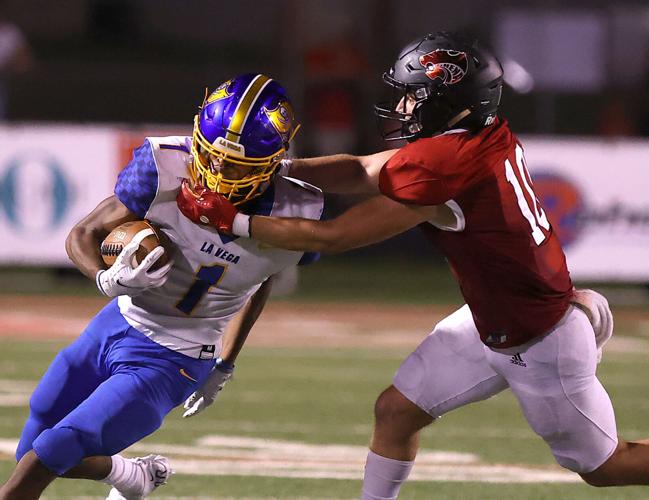 JASON ORTS Special to the Tribune-Herald

LORENA — All night long Friday, it appeared Lorena was a play or two away from putting La Vega away for good.

While the knockout blow never truly came, the Lorena defense stood tall when it mattered most. La Vega drove from its own 20 to inside the Lorena 20 in the final three minutes before the Leopards knocked down a pass into the end zone on the final play to preserve a 14-6 win in a slugfest at Leopard Stadium.

“Any time you can come out against a quality football team and win, and especially in this day and time to hold them to six points, that’s remarkable,” Lorena coach Ray Biles said. “I’m really proud of the effort.”

In the first meeting between longtime district rivals since 2017, the Leopards limited the Pirates to 212 yards of total offense and intercepted La Vega quarterback Robert Prescott twice.

Lorena (3-1) led 7-6 at halftime, forced a La Vega three-and-out and put the ball in the end zone on the next play.

That’s when Kasen Taylor popped around the right end and stiff-armed a defender while tiptoeing the sidelines on his way to a 60-yard scoring burst. Taylor finished with 144 yards on 18 carries to lead the Lorena offense.

“That was huge. Taylor come out the front side on that, but he did a great job of hitting a crease and turning it on,” Biles said. “It was a well-blocked play. We had numbers, and he hit it. It was a real clean play. We’ll take it. We need more of them.”

The Leopards took the opening kickoff and marched 70 yards in six plays before Jackson Generals lofted a 10-yard touchdown pass to Brock Kuhl in the left side of the end zone.

La Vega (1-3) was largely stuffed offensively in the first quarter but needed only one big play to get on the board. Nikzavyer Rice took an option pitch around the right end and found nothing but green in front of him on a 56-yard sprint down the sideline with one second left in the first quarter. The extra point missed, however, and Lorena carried a 7-6 lead into the second quarter.

Both teams had chances to add to their totals in the second quarter, but neither found the end zone. La Vega had Devonta Hilliard punt return that went the distance called back on a holding penalty, and the Pirates drove to the Lorena 22 before a fourth-down pass was well overthrown and intercepted in the end zone by Braylon Henry.

The Lorena offense twice moved over midfield, but a fumble stopped a drive that reached the La Vega 36. The Leopards overcame a pair of holding penalties on their final drive of the first half to reach the Pirate 19 before their last-second throw into the end zone fell incomplete.

“We told our defense at half they’re doing a good job,” Biles said. “They were containing and they continued doing that in the second half as well. We shot ourselves in the foot with some penalties, so we’ve got to clean that part of the game up.”

Jackson Generals threw for 142 yards and a touchdown for Lorena, with Jadon Porter catching five passes for 94 yards. Generals’ biggest play of the game came with his legs, when he broke a 42-yard run on third-and-17 from the Lorena 5 for a first down with less than five minutes remaining.

The Leopards didn’t score on that drive, but it forced La Vega to go the length of the field to try and tie the game late.

No matter how the game turned out, Biles said it was good to see Lorena and La Vega playing again.

“We’ve got such a great respect for La Vega, Coach (Don) Hyde and prior to that Coach (Willie) Williams,” Biles said. “We know how hard they work, and the kids are well-coached. For our kids to get a ‘W’ against that caliber of competition, that’s a big deal for us.”

Texas high school football scores, Week 4: All the scores from around the state.

Lorena’s Kasen Taylor is tripped up by La Vega’s Mecca Walker after a gain Friday.