There’s still a place for old school run-and-defend football, and the Crawford Pirates prove it every Friday night.

With Camron Walker and Breck Chambers carrying the ground game and the defense forcing three interceptions, the No. 4 Pirates hammered their way to a 33-14 win over a hot Hamilton squad.

Walker rushed for 94 yards and a touchdown while Chambers picked up 72 yards and scored a pair of touchdowns as the Pirates improved to 6-0 overall and 2-0 in District 7-2A Division I.

“I’d say the offense really carried the big stick tonight,” said Crawford coach Greg Jacobs. “The offensive line did a tremendous job, and of course Camron Walker and Breck Chambers are fearless ballcarriers. Our offensive line continues to grow. That was our weakness coming into this year and we’re still putting pieces together, but they’re learning to play together and trusting each other and understanding what we’re trying to do.”

Coming into the game, the Bulldogs (5-2, 2-1) had averaged 43 points during their four-game winning streak.

They controlled the clock for long periods with an effective running game, but were far less successful throwing the ball. Walker’s interception set up Crawford’s first touchdown before safety Luke Torbert intercepted two more Keegan Votaw passes, including a pick-six in the fourth quarter to seal the win for the Pirates.

“We work hard during the week on trying to do a good job defending the passing game and trying to read routes,” Jacobs said. “We’ve got some great athletes back there that are very instinctive. That’s the biggest thing: They really have a knack for the ball. Luke Torbert is really special on the defensive end.”

It didn’t take long for the opportunistic Crawford defense to make an impact as Walker intercepted Votaw’s pass on the second play of the game and returned it 10 yards to Hamilton’s 14.

Chambers did the rest as he rumbled for nine yards followed by his five-yard touchdown run to give the Pirates a 7-0 lead with 10:20 left in the first quarter.

The Bulldogs drove 33 yards to Crawford’s 39, but the Pirates stopped the drive when Luis Rodriguez and Colt Murphree nailed Chris Millican for no gain on fourth-and-five. But the Pirates gave the ball back to the Bulldogs when Torbert fumbled the snap at Crawford’s 46.

Hamilton cashed in as Votaw found Austin Clark sprinting down the left sideline for a 37-yard game-tying touchdown with 2:54 left in the first quarter.

Walker put the Pirates into great field position when he returned the kickoff to Hamilton’s 27 to set up Walker’s four-yard touchdown run to take a 14-7 lead with 11:12 left in the second quarter.

The Bulldogs then ran more than eight minutes off the clock when they drove 48 yards on 13 plays to Crawford’s 27. But facing third-and-5, Torbert intercepted Votaw’s pass in the end zone for a touchback.

Crawford’s offense found its explosive gear when Walker ran around the left side for 26 yards before Murphree turned a short pass from Torbert into a 41-yard touchdown when he raced down the right sideline to extend the lead to 20-7 with 1:26 left in the second quarter.

The Pirates pushed their lead to 26-7 when they opened the second half with a seven-play, 53-yard drive that ended with Chambers’ one-yard touchdown run.

The Bulldogs stayed in the game when Votaw hit Bryson Tarpley for a seven-yard touchdown pass with 10:22 remaining.

But Torbert perfectly read Votaw’s pass over the middle and returned it for a 24-yard score to give the Pirates a 33-14 lead with 5:44 left in the game. 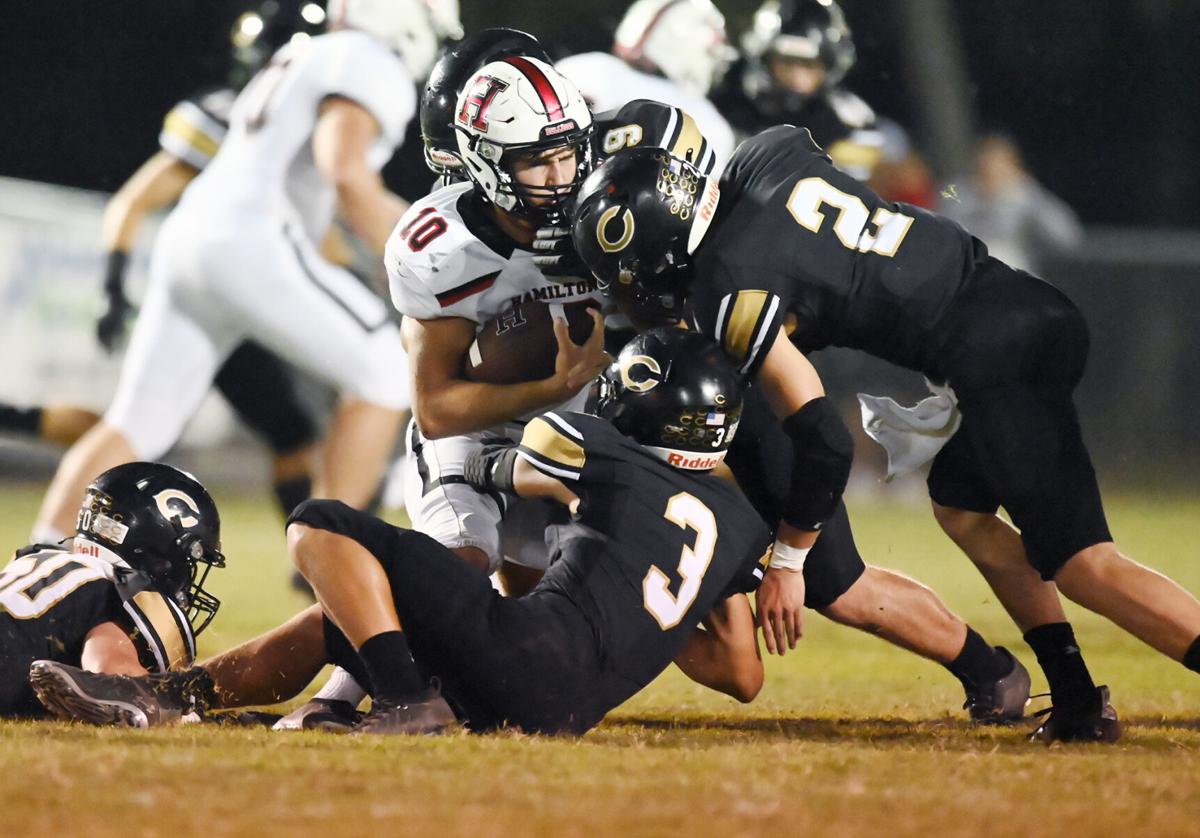 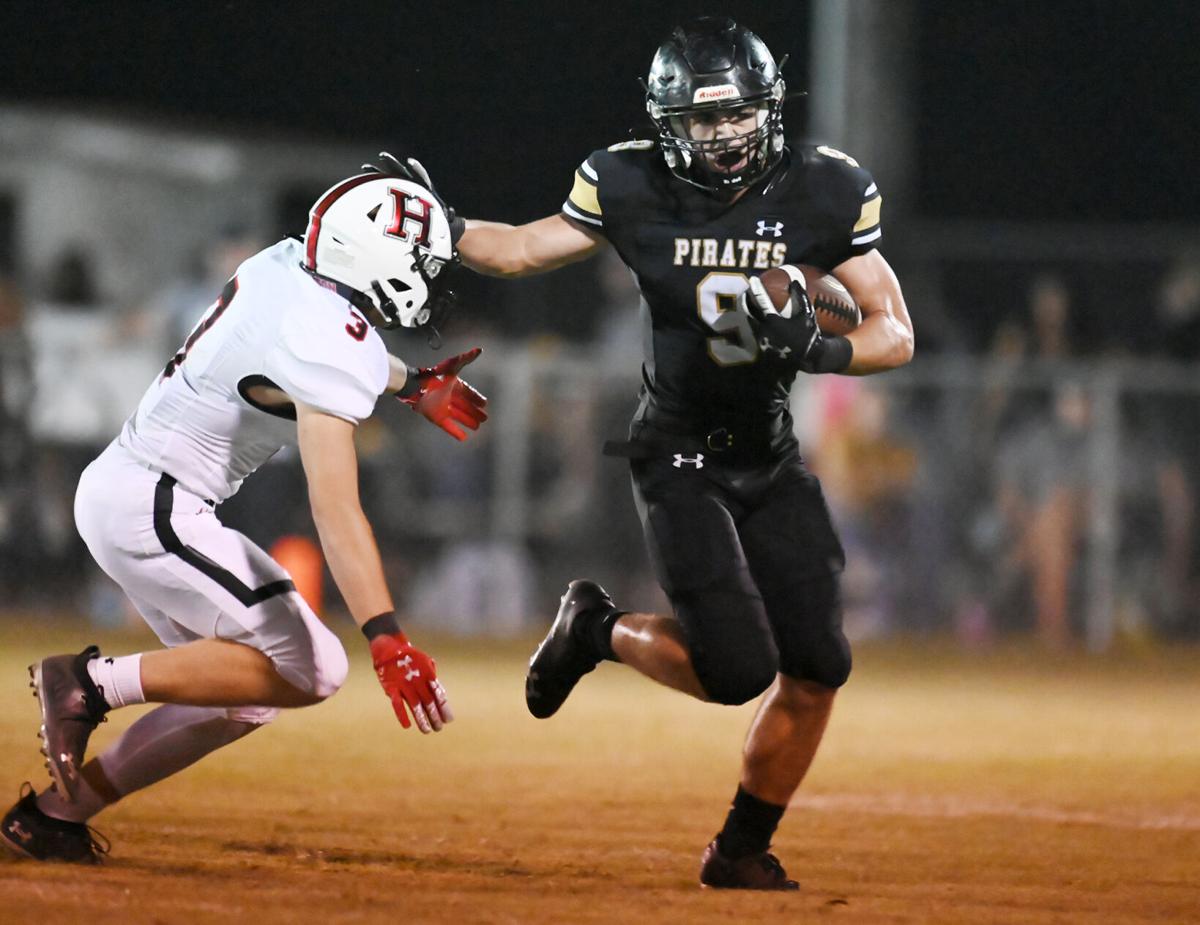 Crawford's Camron Walker pushes off on Hamilton's Jaxon Edwards in the first half. Walker rushed for 94 yards and a touchdown in the Pirates' 33-14 district win on Friday.