AUSTIN — The Marlin boys’ 4x100-meter relay team waited to go up to the medal stand at the UIL State Track Meet with steely, possibly angry looks on their faces.

AUSTIN — It’s been a painful few weeks for McGregor junior Darieus Dixon, but he fought through a finish on top.

Dixon suffered an abdominal wall strain at the area meet in mid-April while he was competing in the triple jump. He still had his best event — the 400-meter dash — later in the day, and there was no choice but to gut it up and endure the pain.

Dixon was feeling no pain as he came down from the medal stand early Thursday evening at Myers Stadium with a gold medal around his neck.

The McGregor Bulldog clocked 48.31 seconds in the Class 3A boys’ 400 to win by .64 of a second over Bryan Thomas of Palacios in second place.

Folks in McGregor consider it a track and field town, so everyone was celebrating Dixon’s title.

“It’s been like six years since McGregor had a gold medal, so it felt pretty special,” Dixon said. “The town was behind my back the whole time, so I was able to do something to make them happy.”

McGregor got another reason to cheer as Dixon anchored the Bulldogs to a bronze-medal finish in the mile relay.

The Bulldogs team of Zach Ainsworth, Sebastian Valdez, Cooper Burgess and Dixon finished in 3:23.43, .64 behind Palacios in first place.

La Vega’s streak of relay victories ended with the first event on the track on Thursday evening. The Pirates finished fifth in the 4x100-meter relay with a time of 41.81 seconds.

Melissa edged out a gold medal by a razor thin margin that separated first through third. The Cardinals got the stick around in 41.522, .006 faster than Bellville in second and .007 ahead of Somerset in third place.

La Vega had won seven straight 4A relay titles dating back to the mile relay in 2018, including all three relays in 2019 and 2021. The last time the Pirates didn’t win a relay in which they qualified for the state meet was the 4x100 in 2017 when La Vega finished fourth.

The Pirates finished fourth in the 4x200, missing a medal by .23 of a second, and took fifth in the mile relay.

Ariana Brown claimed La Vega’s only medal of this state meet as she finished second in the 4A girls’ 400. Brown posted a time of 56.64 to finish .22 behind Taylor McFarland of Godley.

Cameron Yoe’s Yierra Flemings had just one bronze medal to show for her first three events at the state meet. She finished fifth in the long jump to start the day, then took third in the triple jump before anchoring the Lady Yoe 4x100 team to a fifth-place finish.

But she surged into the lead midway through the 100-meter hurdles and ran to a gold medal with a time of 14.4. She was .23 in front of Alyssa O’Malley of Merkel in second place.

Connally junior Jelani McDonald saved his best for his final jump of the season. McDonald posted a mark of 48 feet, 2 inches on his sixth attempt and outdistanced second place Oliver Miles of El Campo by an inch and a half.

McDonald had the fifth best qualifying mark in 4A coming into the state meet at 46-4, but beat that by almost two feet to win the gold medal. He also broke his own Connally school record twice in his six jumps at state.

Before his sixth jump, McDonald’s best effort was 47-4.25 on his second try. He was feeling the hype with one attempt left.

“I just had some energy,” he said. “I had the crowd behind me clapping, so I can’t let them down. Gotta go. Gotta be great.”

West junior pole vaulter Laney Kucera cleared the bar at 12 feet, 6 inches, let go of the pole and seemed to be celebrating before she ever hit the mat.

Kucera let out a shout when she stood up in the pole vault pit and the West fans joined her. At that point, she was one of two competitors left in the 3A girls’ pole vault attempting 12-6.

“She said, ‘I’m so proud of you, I knew you could do it this year,’” Kucera said about the moment with Sowders. “All my coaches had so much confidence in me.”

Kucera tied her personal best mark at 12-6, previously cleared at the area meet. She attempted a state-record 13-0.25, but the pole clipped the bar after she let go and she missed it by that much.

“I came in here thinking I wanted to get first and I wanted to clear 13 to beat the state record,” she said. “I said, ‘I’ll do anything I have to do to get up to first.”

Brackens was joined by McKinna Brackens and Breyunna Dowell in collecting medals in Thursday’s field events portion of the state meet. McKinna Brackens took bronze in the discus at 134-3 and Dowell earned bronze in shot put at 40-7.

West’s Makayla Pavelka won Central Texas’ first medal of the meet as she finished third in the long jump at 18-6.5.

Fear not, West vaulter's backbone is even stiffer than her poles

Like many pole vaulters, West High School junior Laney Kucera is part athlete, part daredevil. Plenty of people who gravitate to the vaulting runway would admit to having a screw or two unhinged.

Every year, the UIL State Track and Field Championships serve up a buffet of athletic drama. 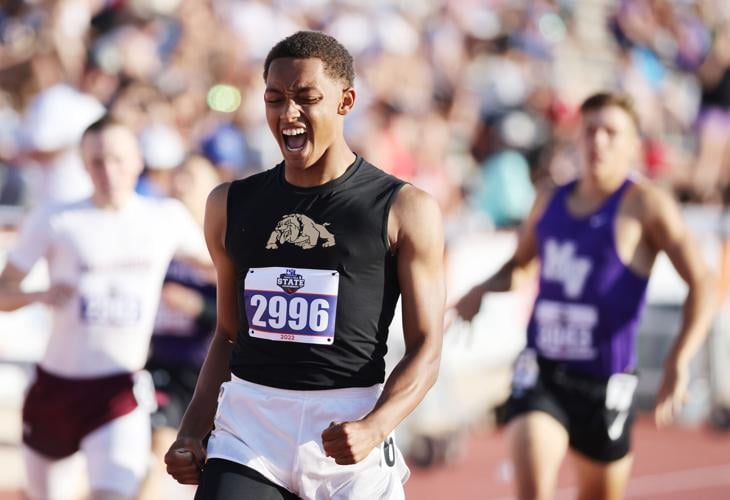 McGregor junior Darieus Dixon screams in celebration after winning the the 3A boys’ 400-meter dash on Thursday at the UIL State Track & Field Meet. 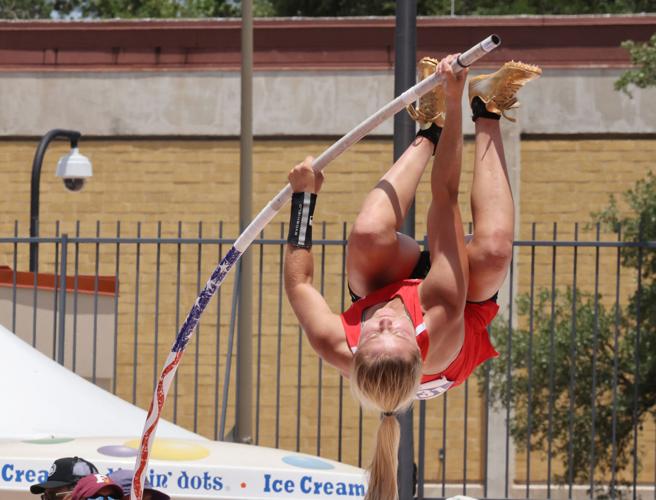 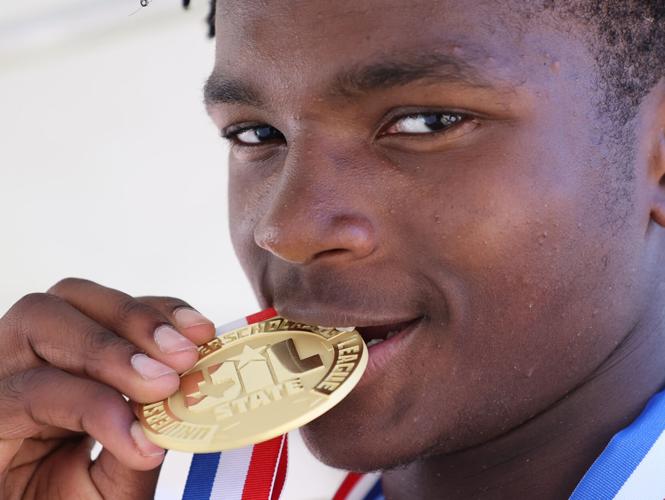 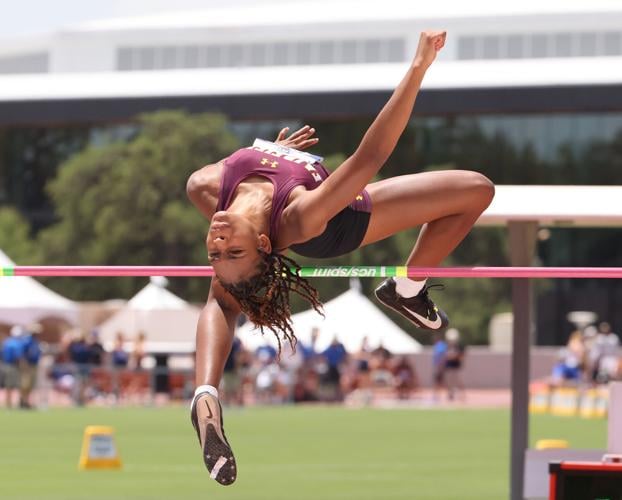 Fairfield’s Shadasia Brackens clears the bar on her way to the 3A girls’ high jump state title. 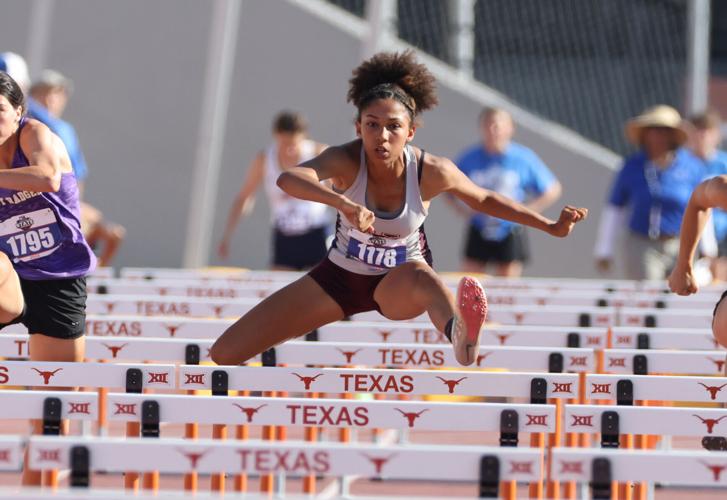