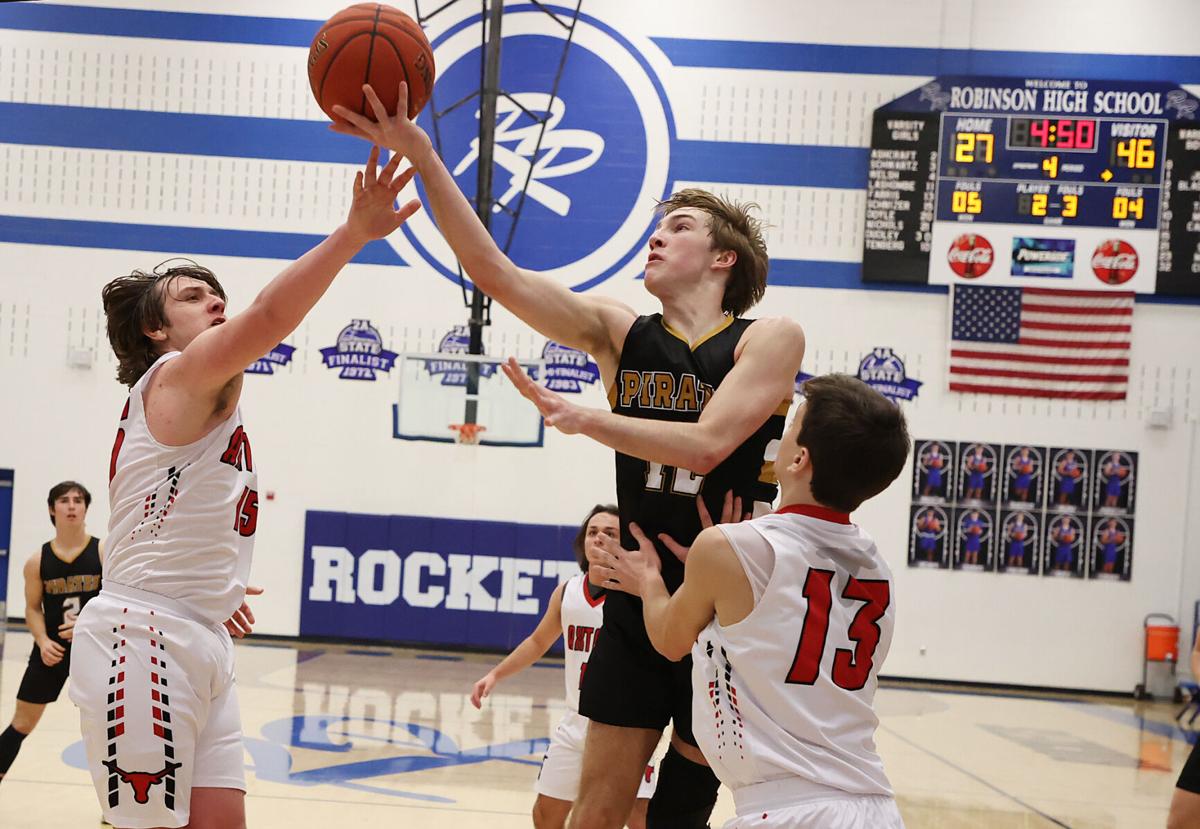 Crawford’s Trey Dobie (rigth) angles a shot over Axtell’s Gavin Belk (left) in the second half. Dobie had five points and a team-leading eight rebounds in the Pirates’ 53-37 bi-district win. 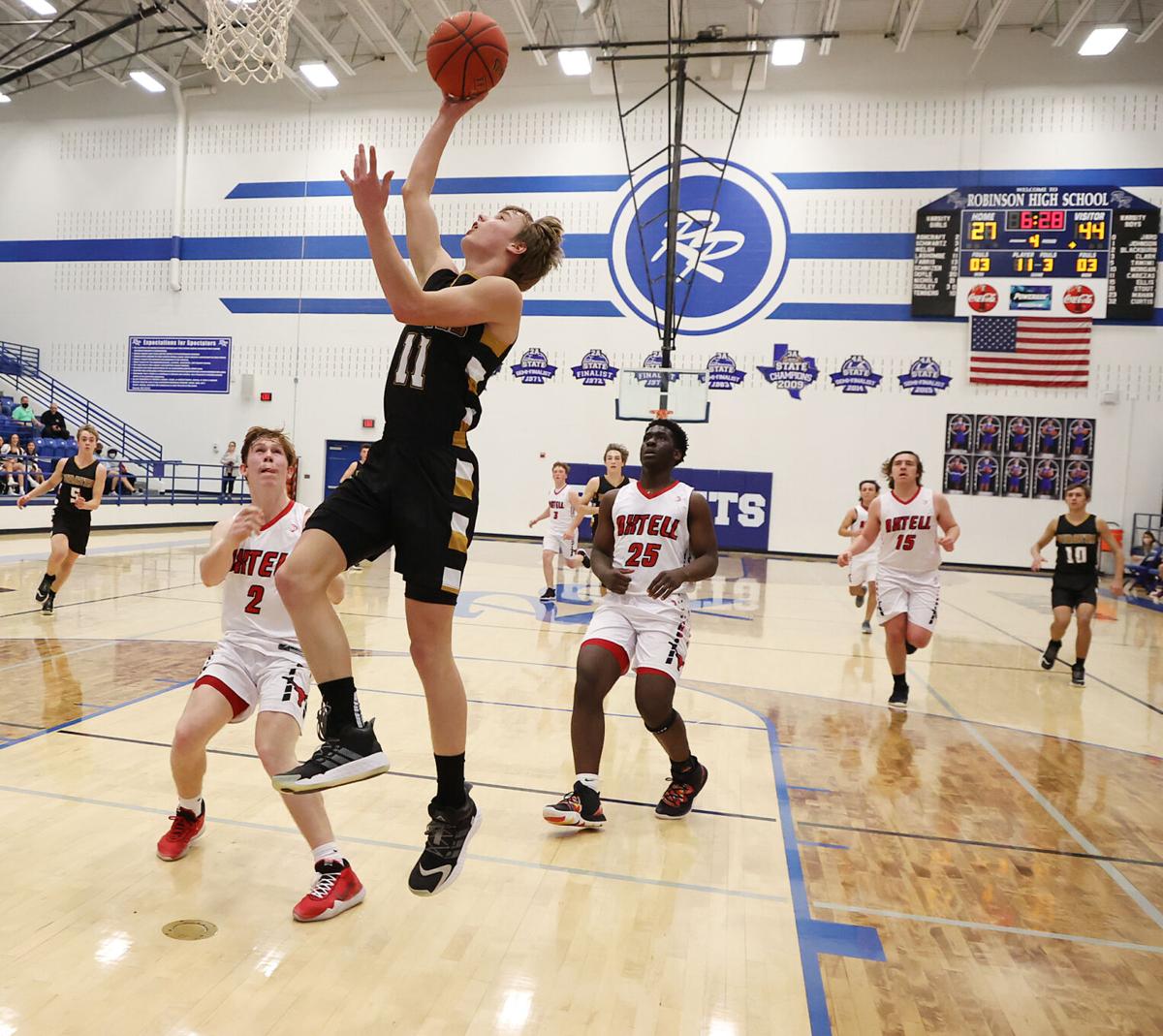 Crawford's Luke Torbert (right) scores in transition ahead of Axtell's Koby Hollingsworth in the second half of the Pirates' bi-district playoff win. 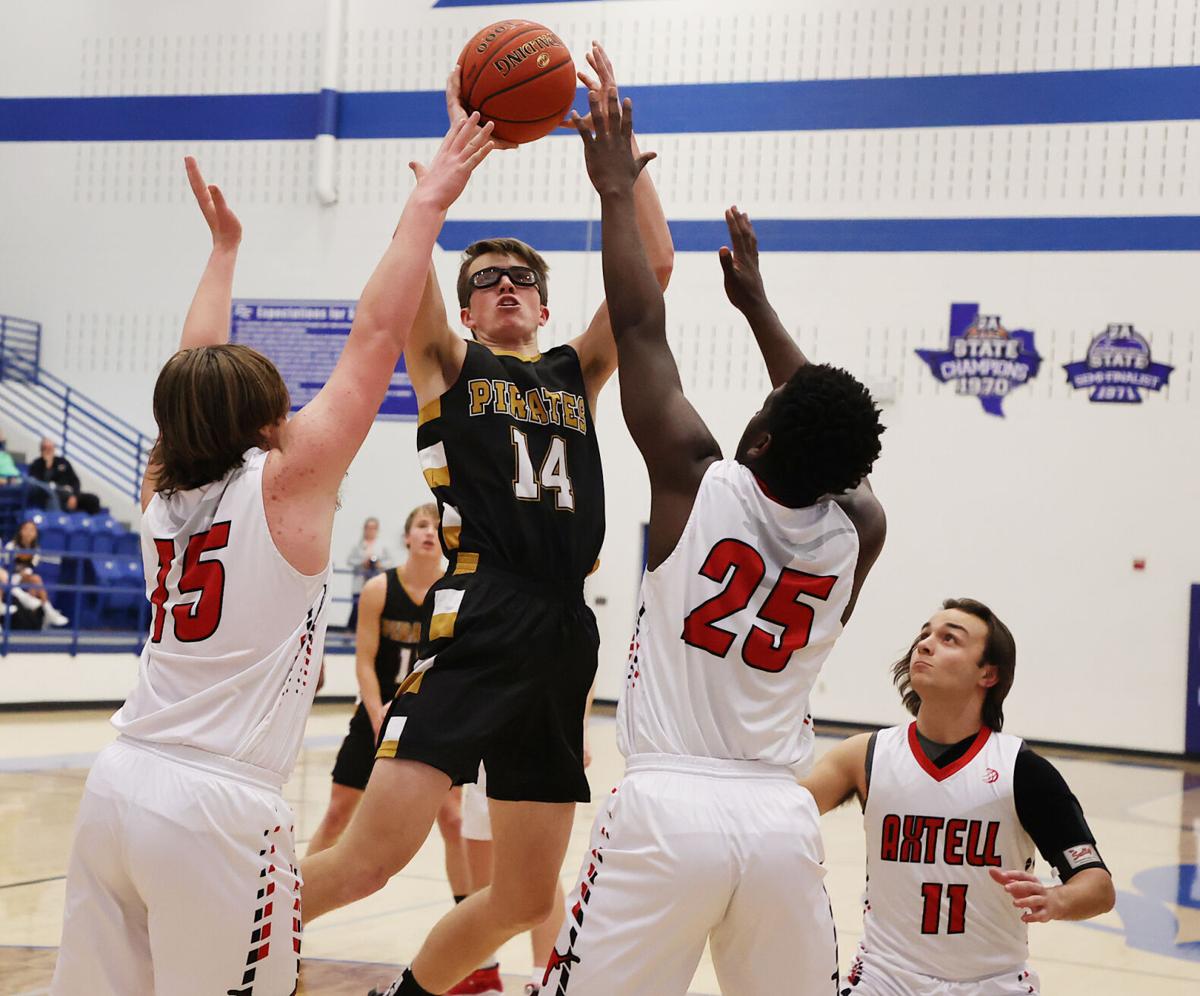 Crawford's Huston Hall (14) shoots between Axtell's Gavin Belk (left) and Laderius Sanders in the second half. 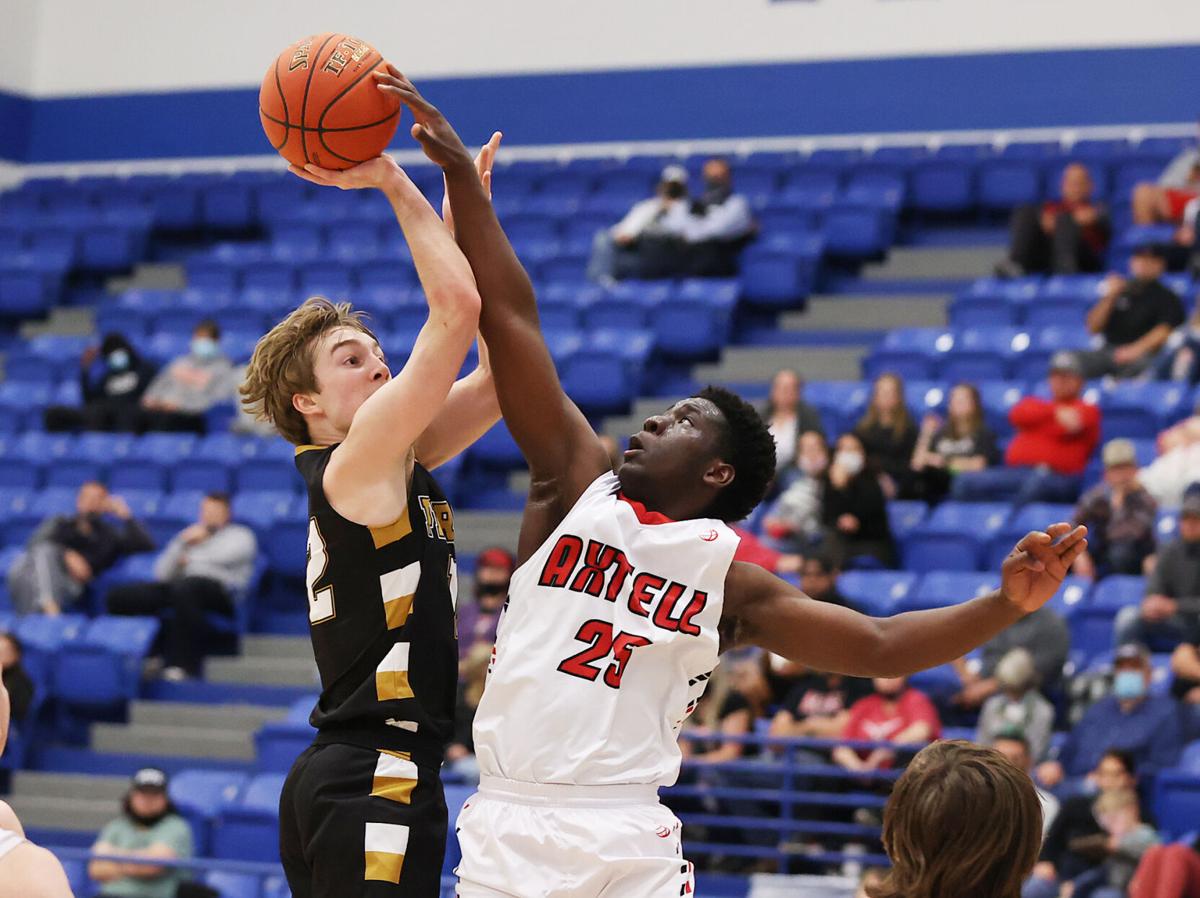 Axtell's Laderius Sanders, right, blocks the shot of Crawford's Trey Dobie, left, in the second half. 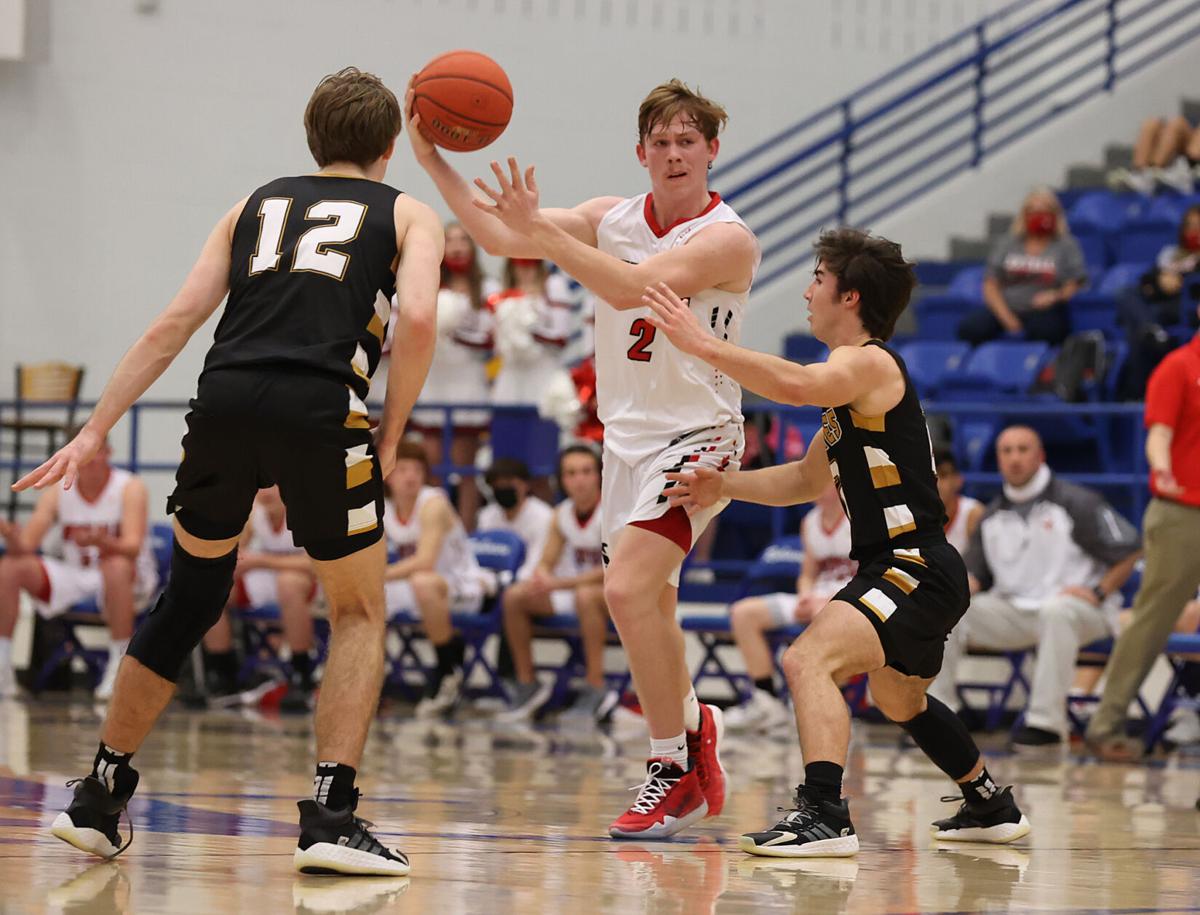 Axtell's Koby Hollingsworth, center, tosses a pass over Crawford's Tanner Merenda, right, in the first half. 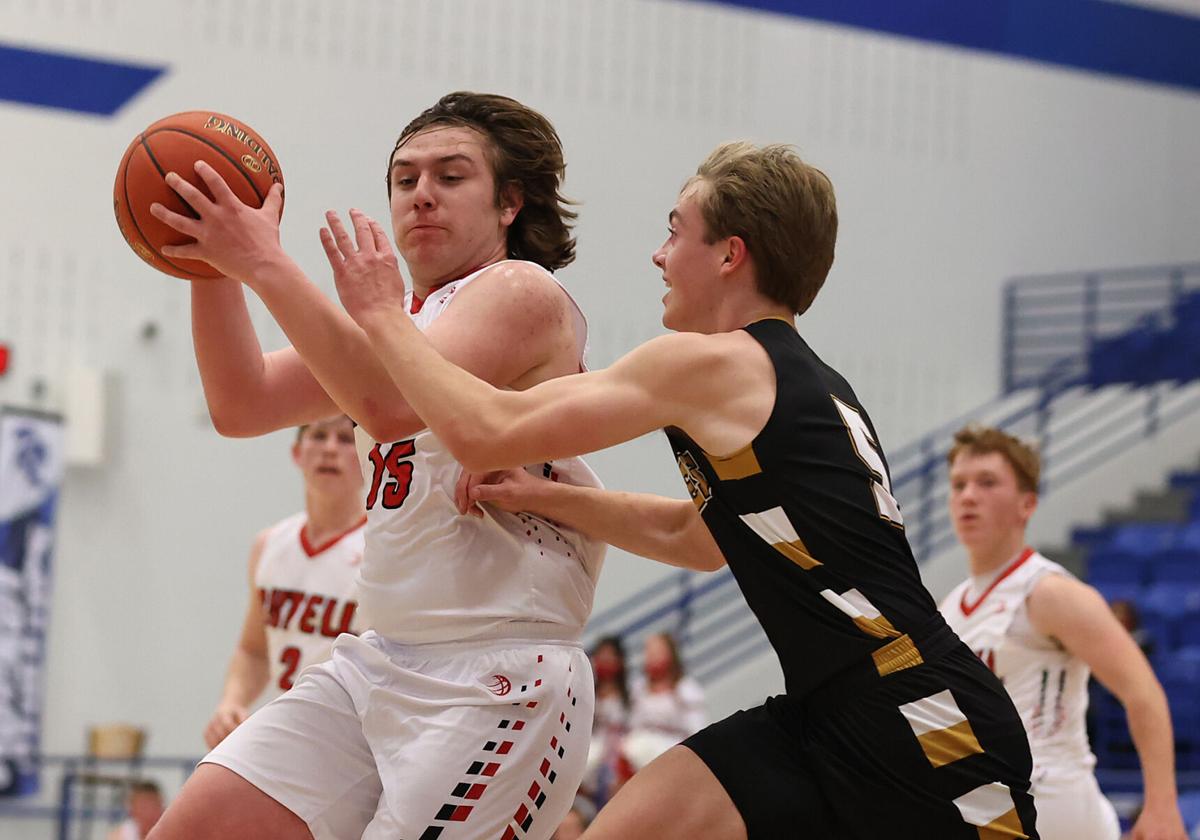 Axtell's Gavin Belk, left, pulls in a pass over Crawford's Ben Baker, right, in the first half. 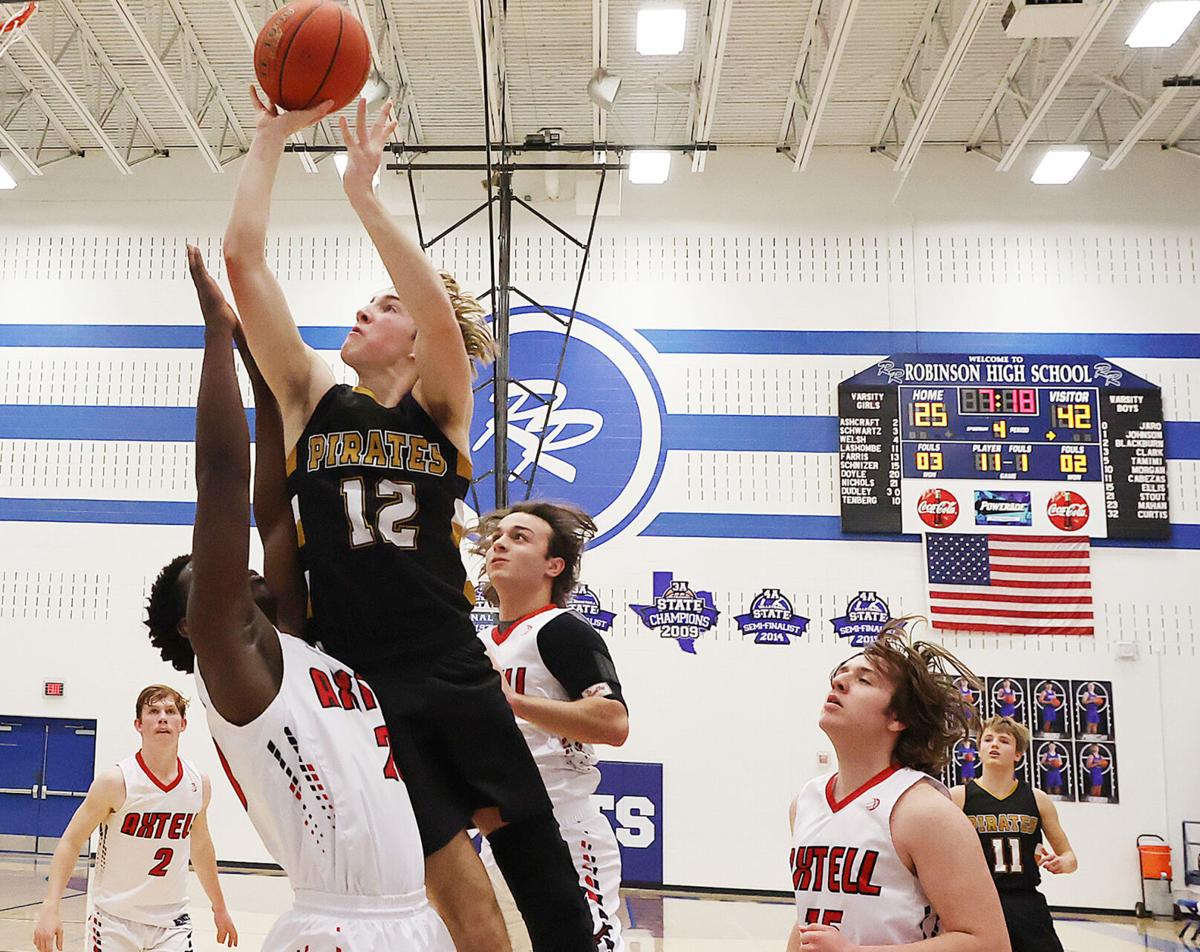 Crawford's Trey Dobie, right, shoots over Axtell's Laderius Sanders in the second half.

After a nearly two-week layoff since the Crawford Pirates last played a game, it would have been safe to expect a bit of rust to accumulate.

On the contrary, these Pirates must use Rustoleum as their body spray, because they looked as fresh as ever.

Crawford displayed patience and adroit passing to pick apart Axtell, 53-37, in a Class 2A bi-district playoff clash on Monday at Robinson High School. The Pirates (12-1) advance on to the area round later this week, where they’ll await the winner of Tuesday’s Centerville-Cayuga game.

Crawford hadn’t played since a 49-32 district win over Rapoport on Feb. 9. The Pirates had their final district game against Rosebud-Lott canceled due to inclement weather, and then like every other team in the state they endured a delay to their playoff debut as they waited out the icy and snowy conditions.

Despite the layoff, the Pirates appeared STAAR-test ready. Meaning, they simply played smart, rotating and reversing the ball with crisp passing and keeping Axtell scrambling defensively.

This marked the third time in the past four years that Crawford and Axtell had met in the bi-district round of the boys’ basketball playoffs. So, they’re familiar foes. As such, Elmore was well-acquainted with the scintillating scoring capability of Longhorns senior guard Koby Hollingsworth.

Hollingsworth still made the Pirates work. Axtell came ready for a gunfight, as the Longhorns made their first three shots of the game. Hollingsworth’s second corner 3-pointer of the opening quarter pushed the Longhorns to a quick 12-9 lead, leading to a Crawford timeout.

Elmore’s main message during that stoppage? Stop giving that guy open shots. Get a hand in his face.

As the game progressed, the Pirates did so.

“We just had to make sure we knew where he was always at,” Elmore said of Hollingsworth. “I think he came out and had 14 in the first half and we knew at halftime we had to turn everything to him. Make sure we get the ball out of his hands as much as we could, and if he did get the ball in his hands make sure we stayed in his face and not let him get any penetration or any wide-open shots. But he still managed to do that a few times.”

Indeed, Hollingsworth led all scorers with 24 points. But he had to doggedly work for every shot attempt, as Crawford shadowed him with multiple defenders and forced other Longhorns to try to beat them. Axtell’s other players couldn’t supply any real consistent support, as Gavin Belk (eight points) was the only other Longhorn player with more than one basket.

Crawford led by five with 2:40 to go before halftime, but doubled that lead by the break in no small part due to guard Ben Baker’s hustle. Baker just proved quicker to the ball in that final stretch, as evidenced by a sequence in the final eight seconds when he missed a pair of free throws, but darted in to get his own rebound and draw another foul and two more charity attempts.

Such liveliness attracts imitators. In the third quarter, it was Ty Williams’ turn to act as Crawford’s portable charger. Williams powered an 11-2 Pirate surge to start the third quarter, as he scored over a smaller Axtell defender on the block, slipped inside for a putback, and then later faked a Longhorn defender off his feet before converting a slick bank shot.

Williams finished with a team-high 12 points to go with three steals.

“He plays with a lot of confidence,” Elmore said. “He’s one of those kids who’s tough, because he’s a physical kid. If you stick somebody on him who’s big he can put the ball on the ground and go by them, if you put somebody on him who’s small he can kind of post them up. He’s just a heady ballplayer who knows what to do with the ball.”

Such a description could fit many of Crawford’s players. Their ball movement was prettier than a disco ball, and as a result they were able to stretch the gap to as many as 22 points.

“Coming back from not having a game in two weeks and only having a few practices in, we came out and shot the ball well to start the game,” Elmore said. “And then we couldn’t make anything inside. But I thought we stuck with the game plan, working the ball. We knew against their zone we were going to have to move the ball and look to attack them from the backside. We did that really well early, missed a few shots early in the second quarter, but in the second half we ended up taking care of the ball.”

For Axtell, Hollingsworth was held scoreless in the third quarter, but he made sure to finish strong in his final high school game. He scored 10 fourth-quarter points, including a high-degree-of-difficulty spinner in traffic before checking out of the game to a raucous ovation from the appreciative Axtell fans with 37 seconds to go.

Though he didn’t score, Axtell’s Laderius Sanders topped all players with 12 rebounds and a pair of blocked shots.

West extended its nice playoff run by thwarting the Academy Lady Bees in overtime in a Class 3A area round battle at Connally High School.

West (15-10), the third-place team in 17-3A, has now beaten a pair of higher seeds after taking down District 18-3A runner-up Mildred and 19-3A champion Academy. The Lady Trojans will face not only a district champ but a defending state champ in Fairfield in the regional quarterfinals later this week.

Postgame: No. 2 Baylor men lose first game of the year to No. 17 Kansas at Allen Fieldhouse

Postgame: No. 2 Baylor men lose first game of the year to No. 17 Kansas at Allen Fieldhouse

LORENA — The China Spring girls’ basketball team knew it was time to scratch and claw.

BELTON — Under Quinton Snell, the Connally Cadets basketball team has been a regular visitor to the regional tournament in Huntsville over the…

CROCKETT — As young as the La Vega girls basketball roster is, you might think they’re ahead of schedule.

Two rounds into the playoffs, the Connally Cadets are beginning to show their identity.

He didn’t go 4-for-4, but Mart’s Roddrell Freeman will still go down as one of Central Texas’ all-time top players.

Crawford’s Trey Dobie (rigth) angles a shot over Axtell’s Gavin Belk (left) in the second half. Dobie had five points and a team-leading eight rebounds in the Pirates’ 53-37 bi-district win.

Crawford's Luke Torbert (right) scores in transition ahead of Axtell's Koby Hollingsworth in the second half of the Pirates' bi-district playoff win.

Crawford's Huston Hall (14) shoots between Axtell's Gavin Belk (left) and Laderius Sanders in the second half.

Axtell's Laderius Sanders, right, blocks the shot of Crawford's Trey Dobie, left, in the second half.

Axtell's Koby Hollingsworth, center, tosses a pass over Crawford's Tanner Merenda, right, in the first half.

Axtell's Gavin Belk, left, pulls in a pass over Crawford's Ben Baker, right, in the first half.

Crawford's Trey Dobie, right, shoots over Axtell's Laderius Sanders in the second half.