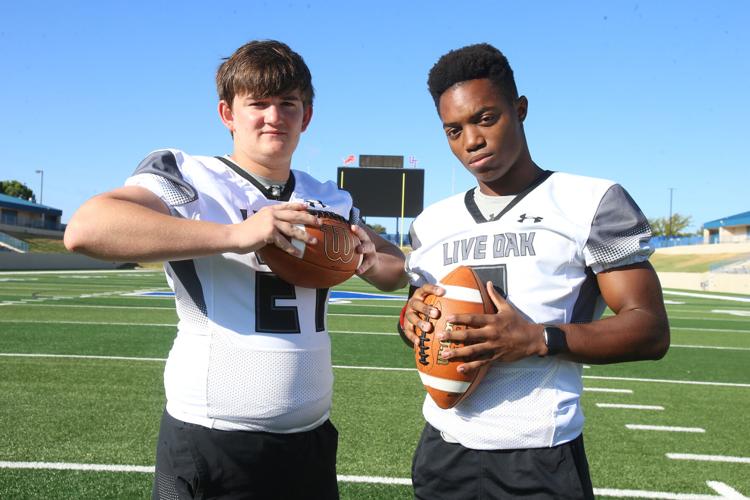 Live Oak’s Braden Smith (left) and Allbree Sharp will serve as the veteran leaders on a Falcons team trying to defend its TAPPS state championship. 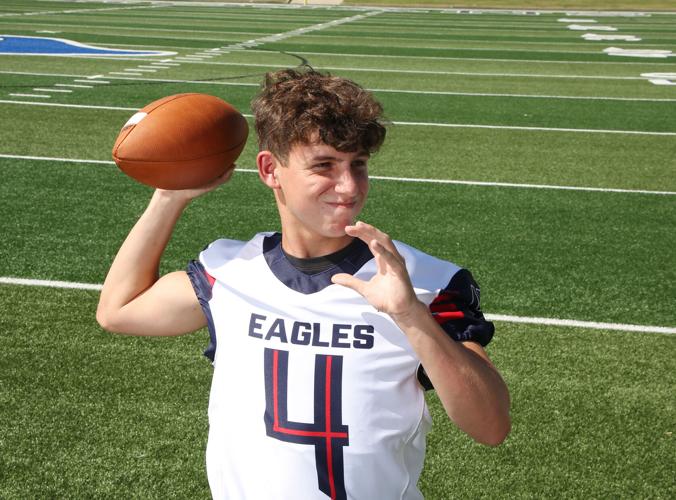 Eagle Christian Academy’s Cason Ingram takes over at quarterback after moving in from Evant. 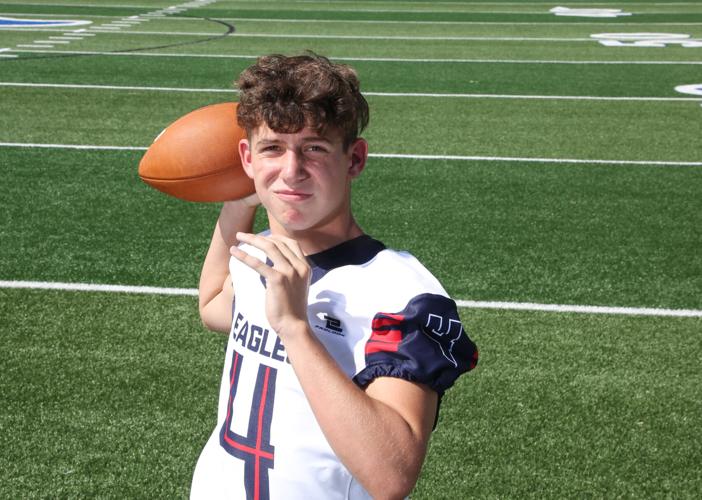 Eagle Christian Academy’s Cason Ingram is the team’s new starter at quarterback after moving in from Evant. 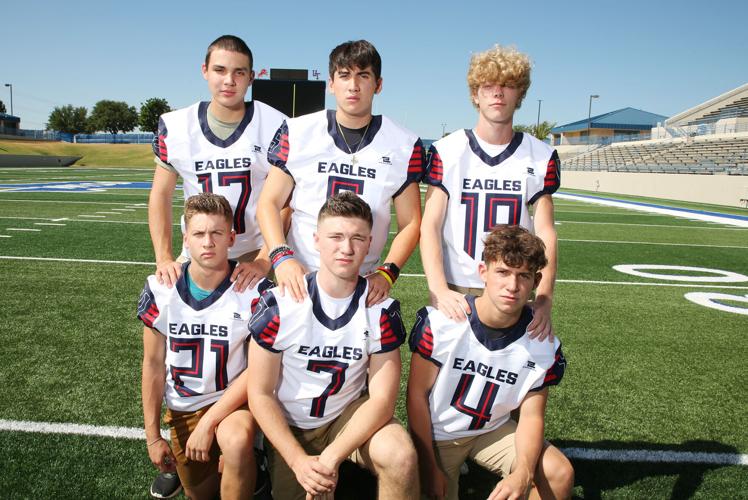 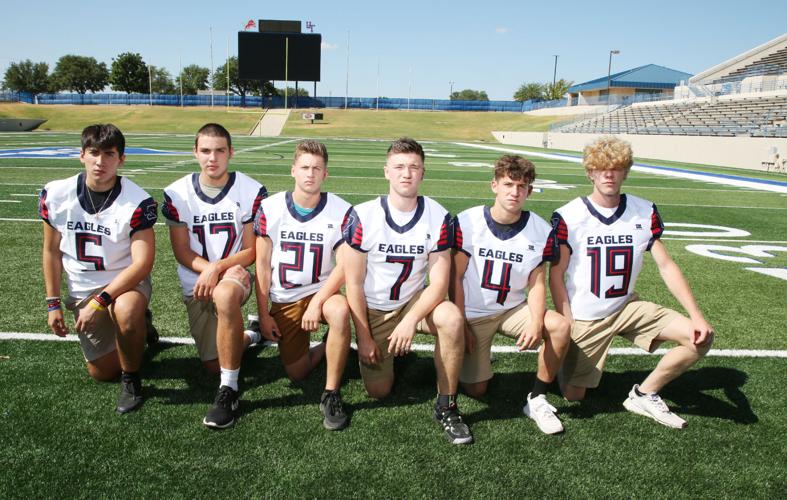 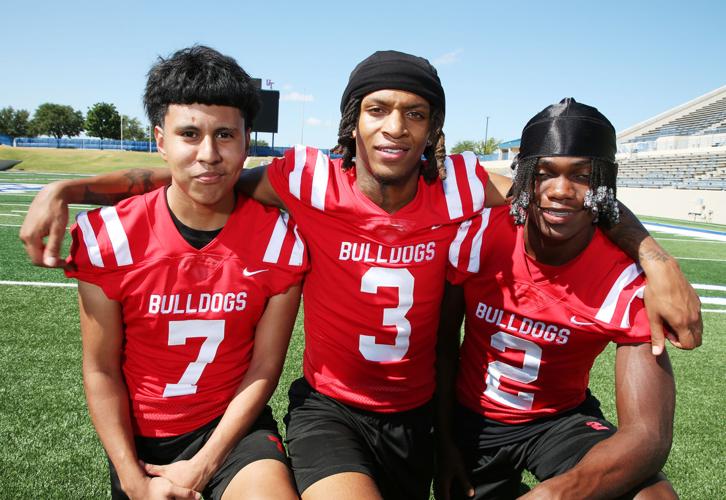 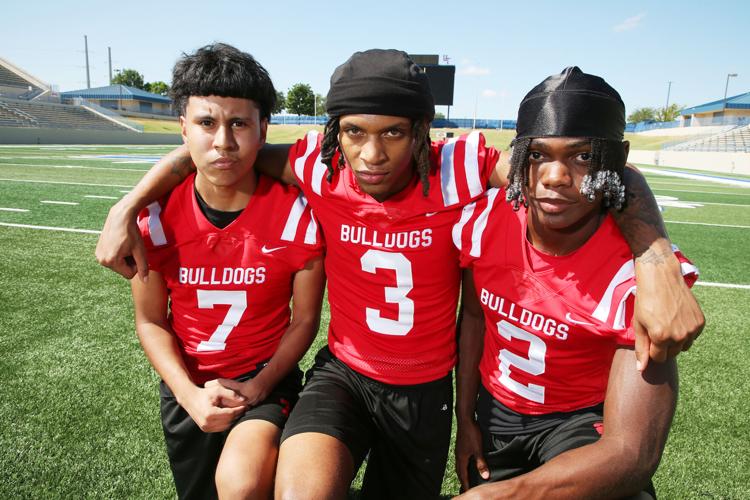 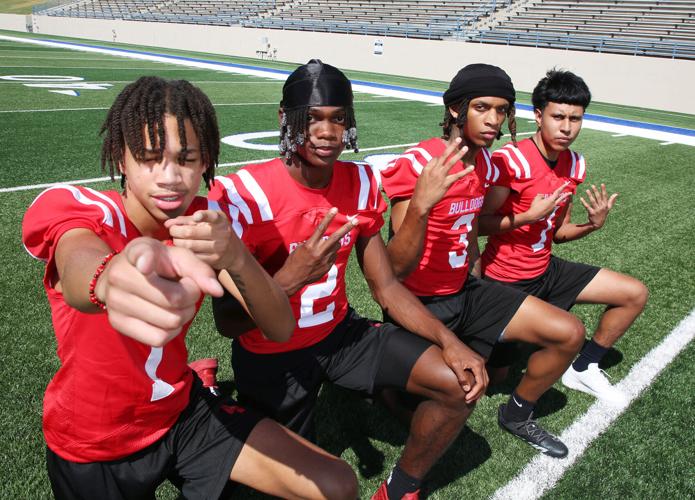 Methodist Home will try to make a run at a TCAF state title behind (left to right): DaRaun Taylor, Maury Arnold, Corleone Coleman and Miguel Sanchez. 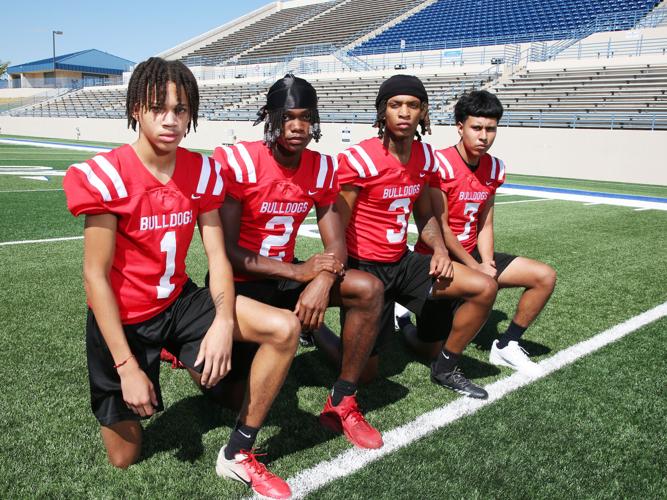 Outlook: Even after graduating a deep and talented group of seniors off last year’s state title team, head coach Brice Helton isn’t about to complain. Live Oak has another big group out for football this year, 24 in all, including a few first-timers to the sport. “That’s a good thing for six-man,” Helton said, regarding the depth in numbers.

Live Oak carries a deep pride in its defense, which is where its two returning starters reside in DB/RB Albree Sharp (43 tackles, 8 INTs) and DB/RB Will Nicholas (68 tackles, 3 INTs). “We’ll be counting on those guys a lot,” Helton said. “They’ve actually got more experience than the rest of our team combined.”

Two returning players who have ascended the depth chart are QB/DB George Sutherland and C/NG Braden Smith. Both are eager to take on more responsibility this season, Helton said.

The coach has also liked what he’s seen from incoming freshman RB/DE Tristan Wachsmann through camp. Wachsmann starred at the junior high level and the bump in competition hasn’t appeared too much for him.

Though there isn’t an abundance of returners, the standard remains perpetually high for the Falcons.

“In six-man it’s a little different than an established 11-man program, just because there are usually more of a consistency in numbers in those programs,” Helton said “But one of the benefits is that these kids know what it takes, they know the work required of them, and the expectation for the program.”

Outlook: After working last year as an assistant under former coach Luke Pilant, new head man Jacob Lefebvre takes the helm of the Vikings’ ship. He’s optimistic that his familiarity with the players will make for a smooth transition.

“I coached almost all these (freshmen) kids in middle school basketball class, in addition to working with the returning guys on the football team last year,” Lefebvre said. “I’ve really been pleased with our attendance in the summer working out, and the commitment from the freshmen.”

Of Vanguard’s 13 players currently out, six are freshmen. No starters from last year’s 9-2 team are back, either, so it’ll be a fresh-faced group, for sure. But Lefebvre likes their potential.

Of those newbies, Cade Carroll could pop as a playmaker, as everything from a quarterback to running back to receiver. Lefebvre is also high on a new Vanguard student, OL/DE Jared Ray. There are only two seniors on the roster, but the coach is impressed with the leadership of OL/LB/NG Andrew Holze. “He’s one of our hardest-working guys,” Lefebvre said.

Vanguard will compete in TAPPS Six-Man Div. I District 1, along with Austin Veritas, Austin Hill Country, Texas School for the Deaf, Carrollton Prince of Peace and Gainesville State School. The Vikings will split their home games between University High School and the new Paul Tyson Field at Waco High.

Outlook: A decade into his gig at MCH, Matt Rodgers has learned to expect the unexpected. From year to year, you never know what the roster turnover might look like.

So when Rodgers surveys the field these days and actually knows everybody’s name, he’s pretty delighted. Last year the Bulldogs entered the season with only 5-7% of their returning production intact. This year it’s more like 75%.

“I don’t know what the ceiling for this team is yet, but I think we’ve at least got the foundation for something special,” Rodgers said.

Rodgers said he’s also blessed to have the same QB in place for a second straight season in Sterling Kemper. He’ll seek out experienced targets like WR/DB Corleone Coleman and WR/DB/K Miguel Sanchez, both of whom have the capability of making lengthy gainers in space.

Outlook: Going from the first playoff win in program history to a one-win season wasn’t the flight pattern the Eagles wanted to follow. “I think we took it personal a little,” said head coach Bryce Frazier, “I know I did. It was a first for me as a coach.”

In what’s becoming a fall camp tradition, Frazier took 11 of his players in early August to a family ranch in Oklahoma for a week of bonding and workouts. He said he still expects to pick up a couple more players before the season opener.

RB/MLB Nick Vences enters his fourth year on ECA’s varsity, and Frazier will lean on him as a team leader. The other returner who earned big minutes last year is WR/OLB Blake Gonzales, who won Freshman of the Year honors for the Eagles’ district, TAPPS Six-Man 3-III.

That leaves plenty of job openings, and Frazier is excited about the potential of the applicants. In particular, three transfers should make an immediate impact. QB Cason Ingram is a move-in from Evant who carries a deep understanding of the six-man game. ECA also picked up a pair of transfers from Midway who should help: WR/CB Isaiah Glen and DE/TE Nick Neal (6-2, 215).

The Eagles will again use Parkview’s field as their turf for home games.

Outlook: After nine seasons serving Waco’s home-schooled athletes as an 11-man program, Wind is gusting into the six-man ranks. The volunteer-run organization believes it’ll be a better fit for its numbers.

With 22 players out this season, that should make for nice depth, and first-year head coach Grayson Brown said that Wind hopes to use entirely different starting offensive and defensive units to keep kids fresh.

DE Jack Daggett, a returning starter, and LB/DB Ace Vernon, an addition who came over from Parkview Christian, will lead the defensive charge. Vernon totaled 49 tackles for the Pacers last year, and obviously is familiar with the six-man game. Brown is also looking for a big year from sophomore safety Everett Wilson.

Offensively, QB John Salmans should make another leap after starting as a freshman in 2021. He has an experienced blocker in front of him in C/LS Luke Brown. A new playmaker joining the mix is RB Elijah Williams, a move-in from Temple who has 2,000-yard rushing potential, Coach Brown says.

Outlook: Cody Landers, a Parkview alum, takes over for Josh Hayes, who departed after three seasons to take an assistant position at Axtell. Landers certainly carries no shortage of Pacer pride, and his quest is to get Parkview winning again.

“I wouldn’t call it a rebuild, more of a new construction,” Landers said. “Hopefully these young kids can be part of a new culture so that when they’re juniors and seniors they can lead the team.”

In his debut season, Landers won’t have the luxury of either large numbers or grizzled experience on his side. Parkview opened camp with just seven players, so avoiding injuries will be paramount. All seven of those players are freshmen and sophomores, so the newbies will definitely get their shot to play.

Sophomore RB/WR/LB Kohen Mayberry will fill a variety of roles, including helping to teach some of the new players to football. Landers said Mayberry will get the ball plenty, along with RB/LB Aidan Martinez and QB/S Aidan Orewiler, smart kids who have picked up on the new schemes quickly.

“I’d love to see us get back to where we were a couple of years ago, when we had winning seasons,” Landers said. “We’ll look to compete for district first, and then try to make a run toward a state championship down the road.”

This marks the Trib's opening kickoff of 12 straight days of Central Texas high school football feature stories, team previews, schedules, predictions and more. Be sure to pick up a Trib, or check us online at WacoTrib.com.

Live Oak’s Braden Smith (left) and Allbree Sharp will serve as the veteran leaders on a Falcons team trying to defend its TAPPS state championship. 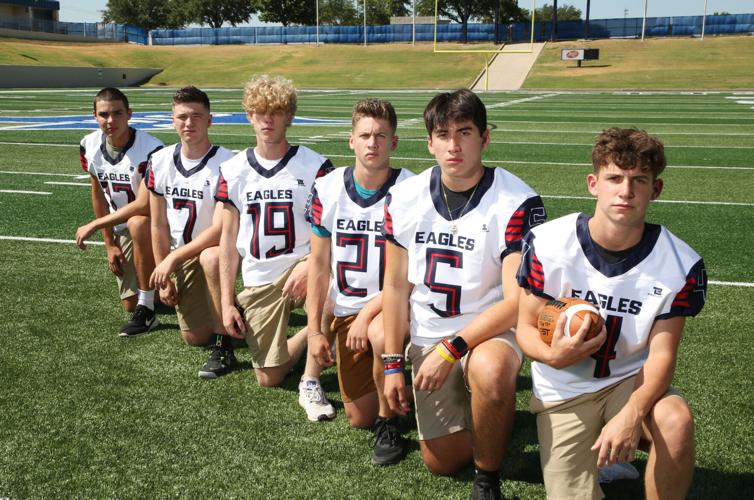 Eagle Christian Academy’s Cason Ingram takes over at quarterback after moving in from Evant.

Eagle Christian Academy’s Cason Ingram is the team’s new starter at quarterback after moving in from Evant. 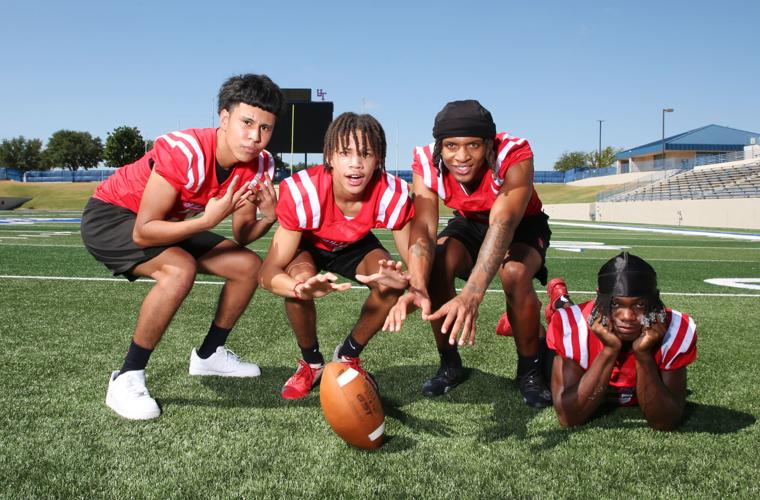 The Methodist Children’s Home Bulldogs will be looking to start a fire this year behind (left to right): Miguel Sanchez, DaRaun Taylor, Corleone Coleman and Maury Arnold.

Methodist Home will try to make a run at a TCAF state title behind (left to right): DaRaun Taylor, Maury Arnold, Corleone Coleman and Miguel Sanchez. 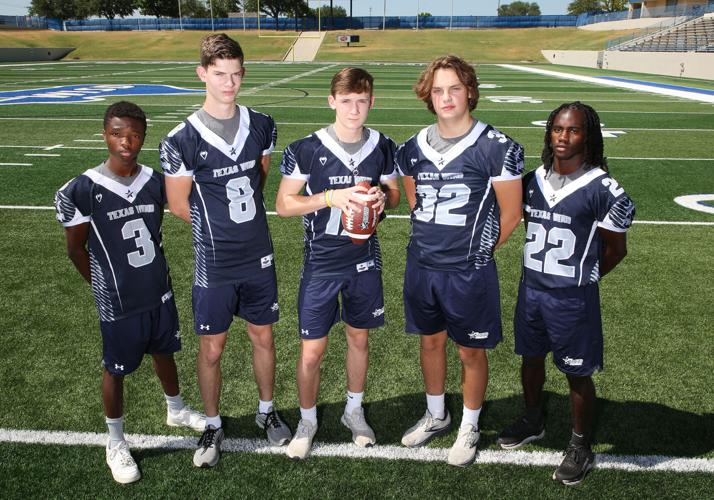