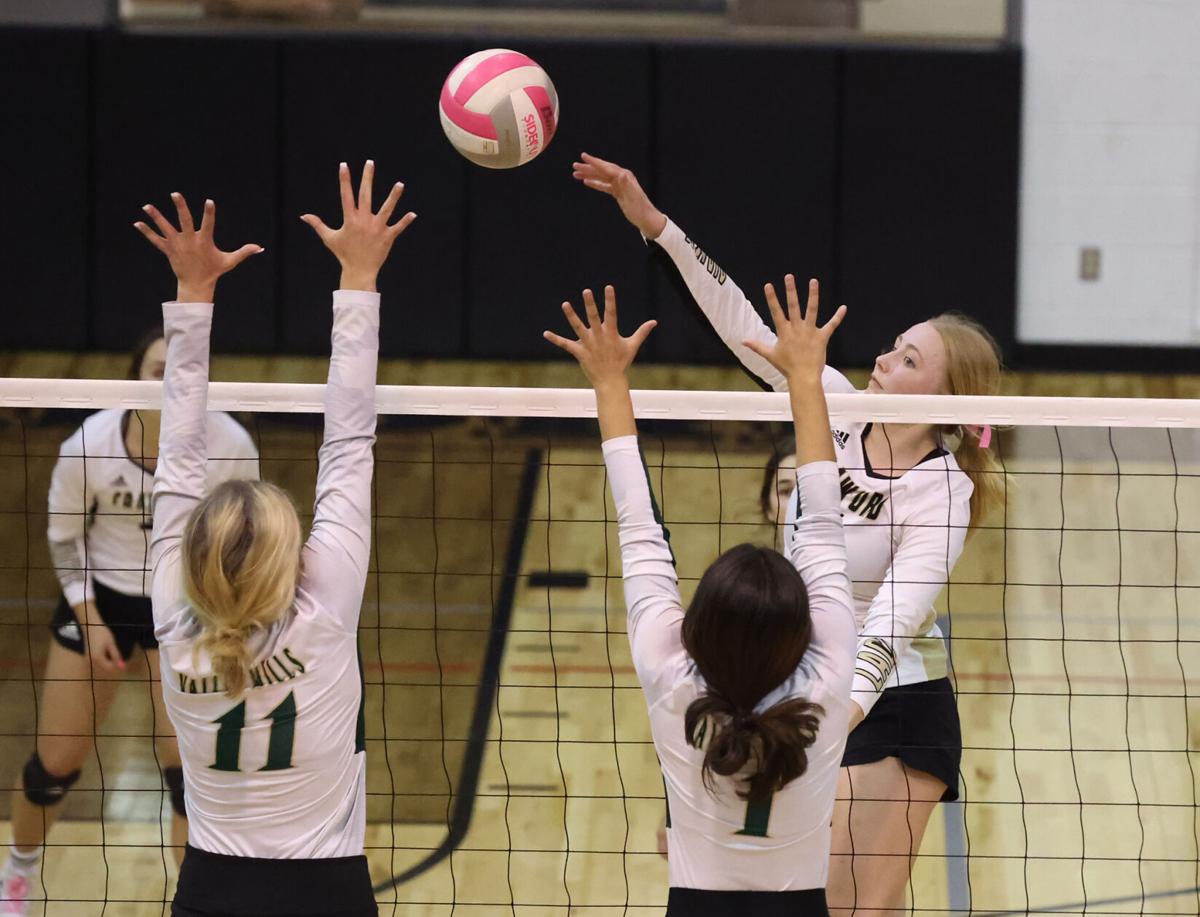 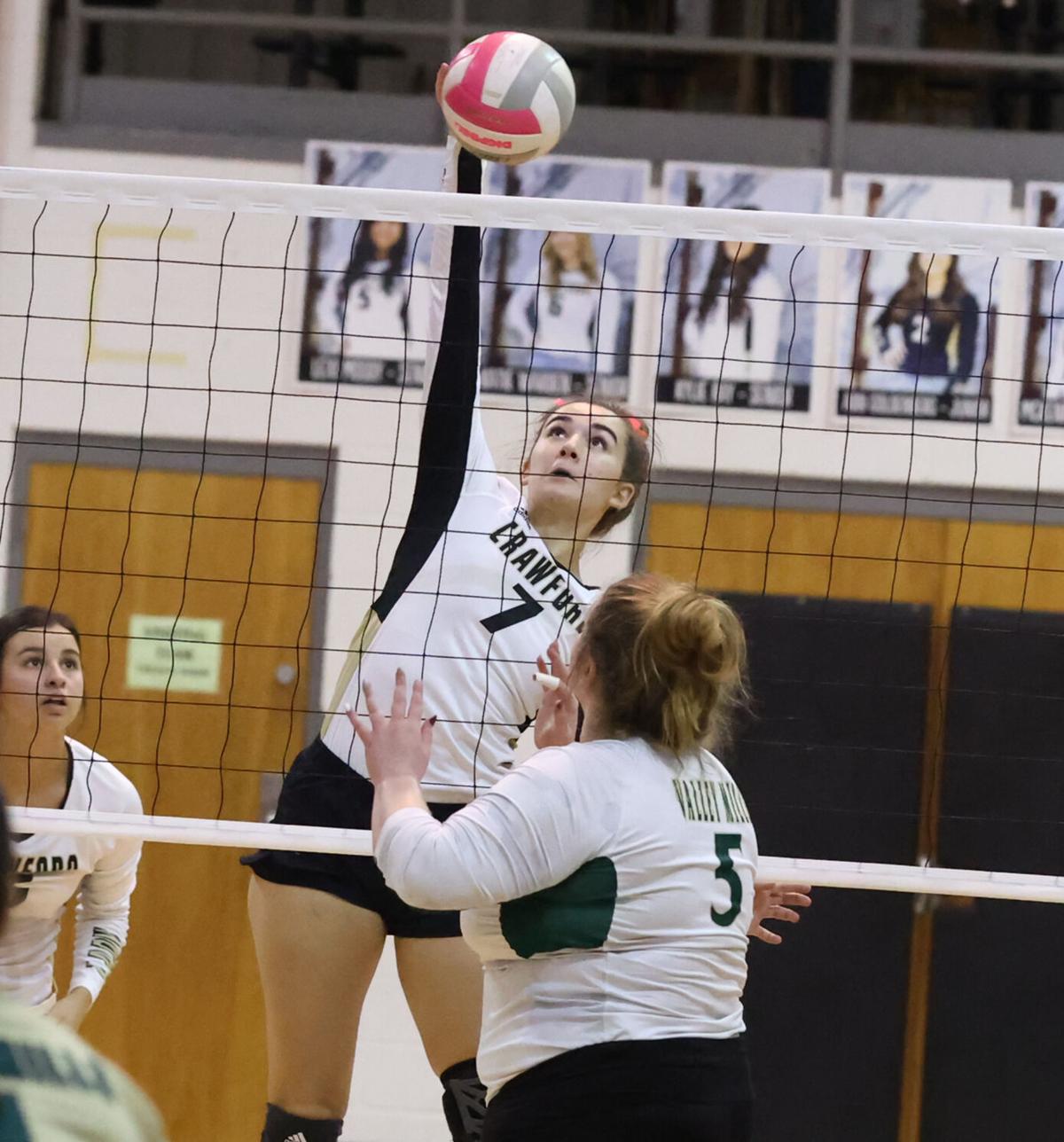 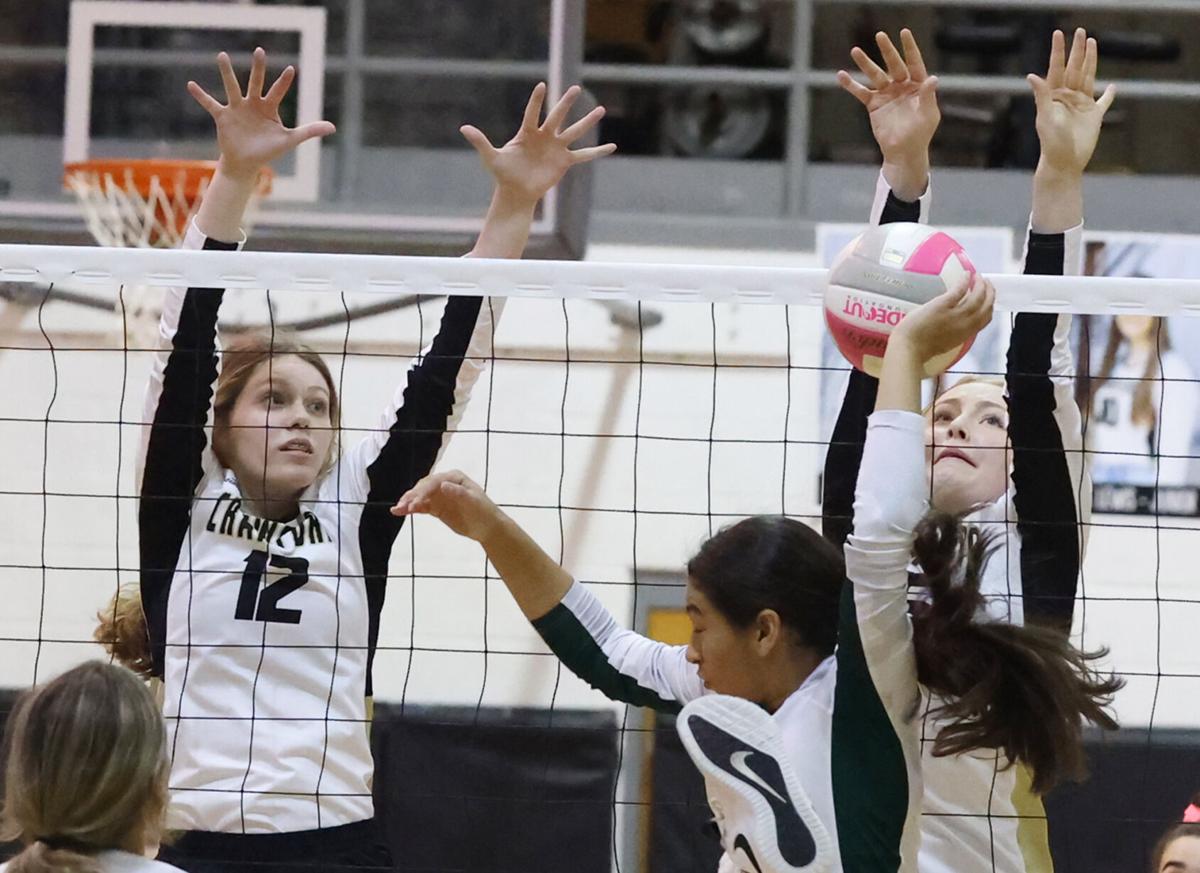 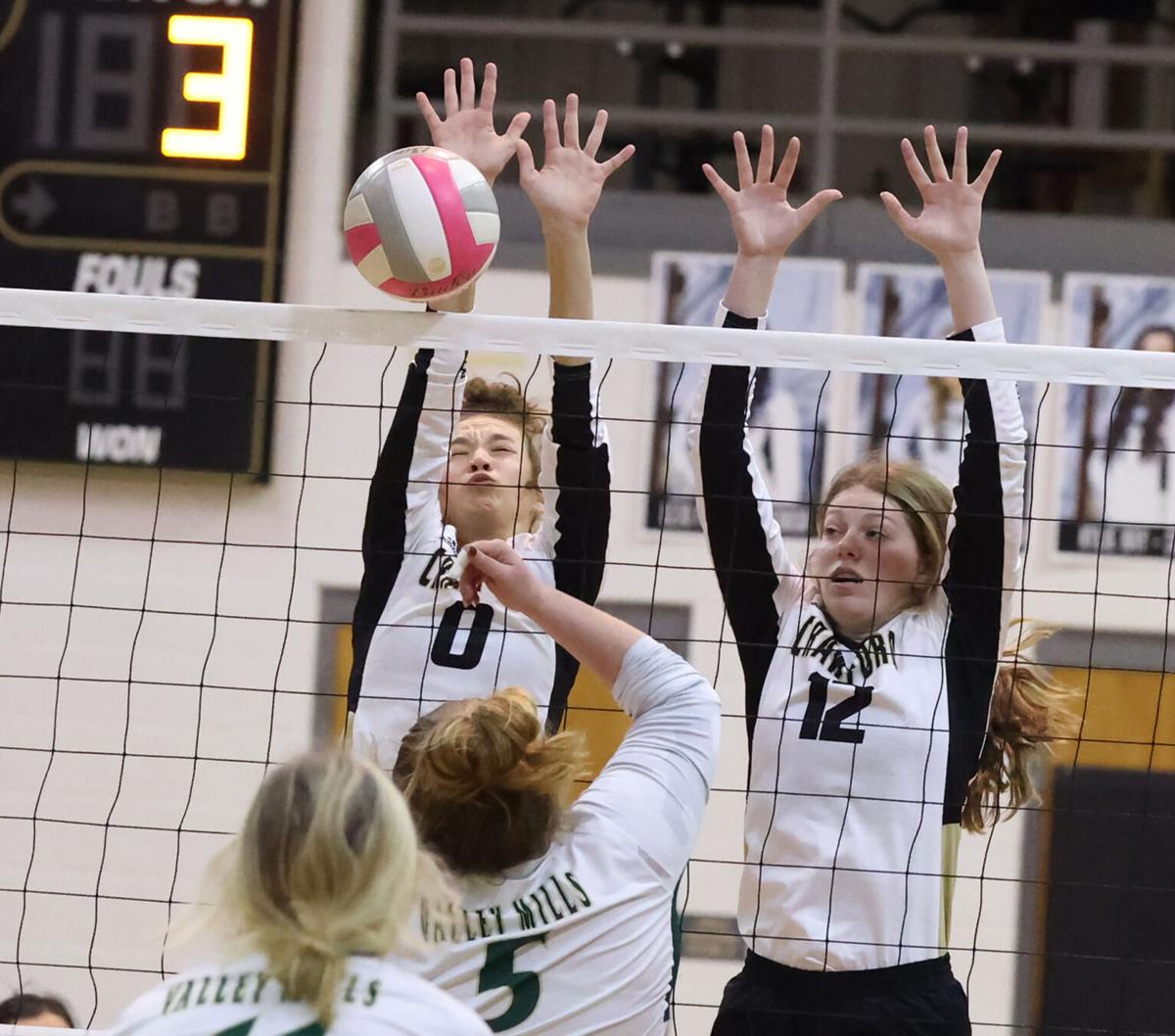 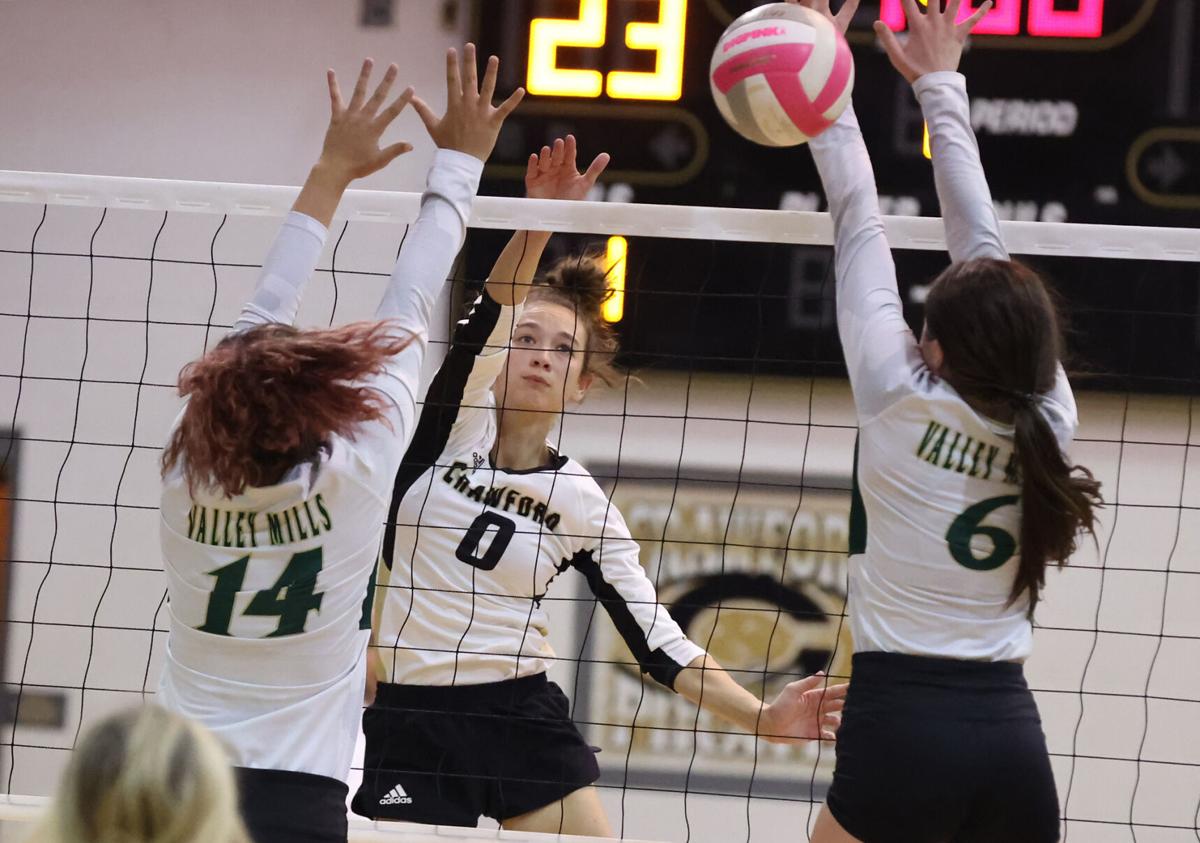 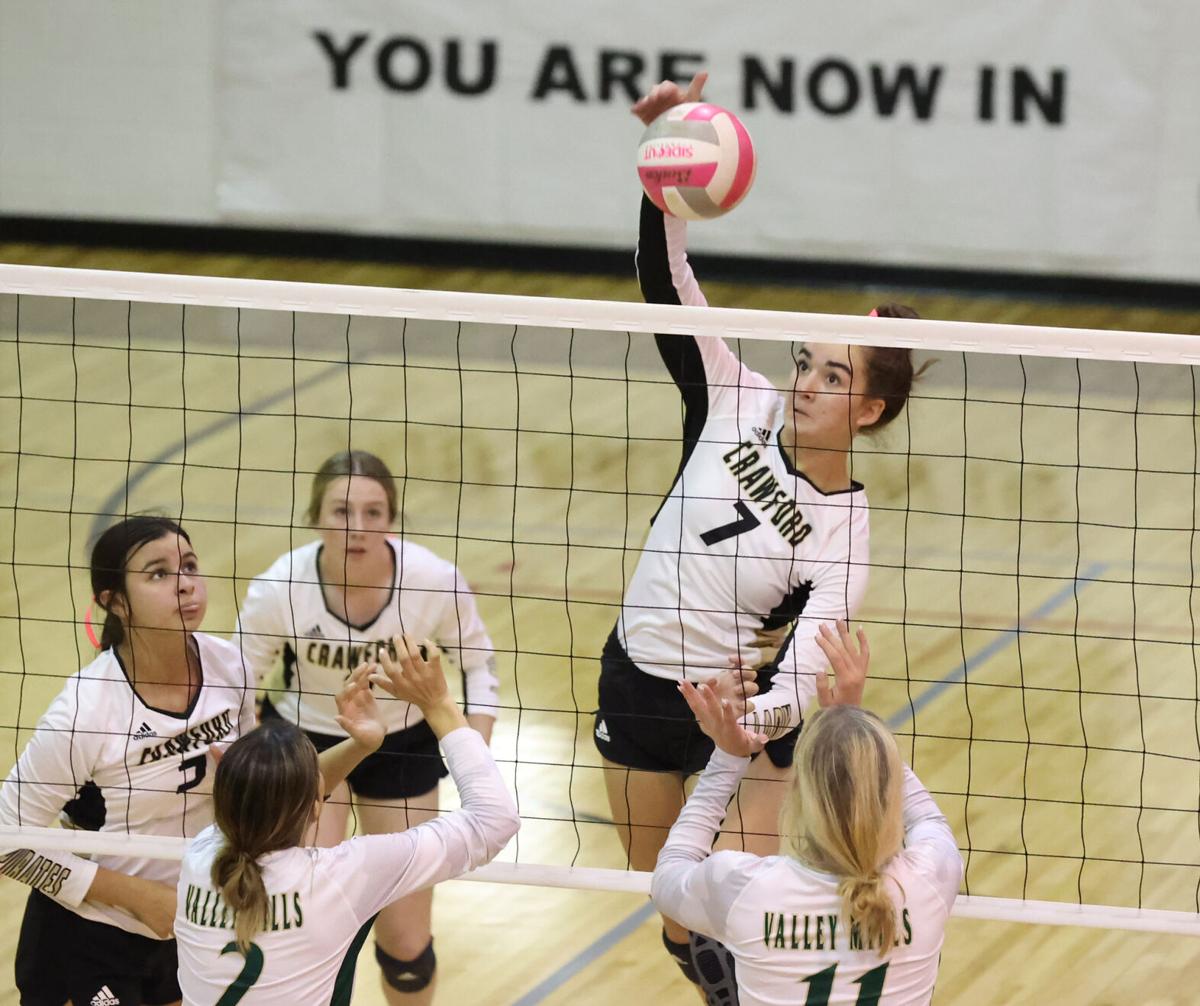 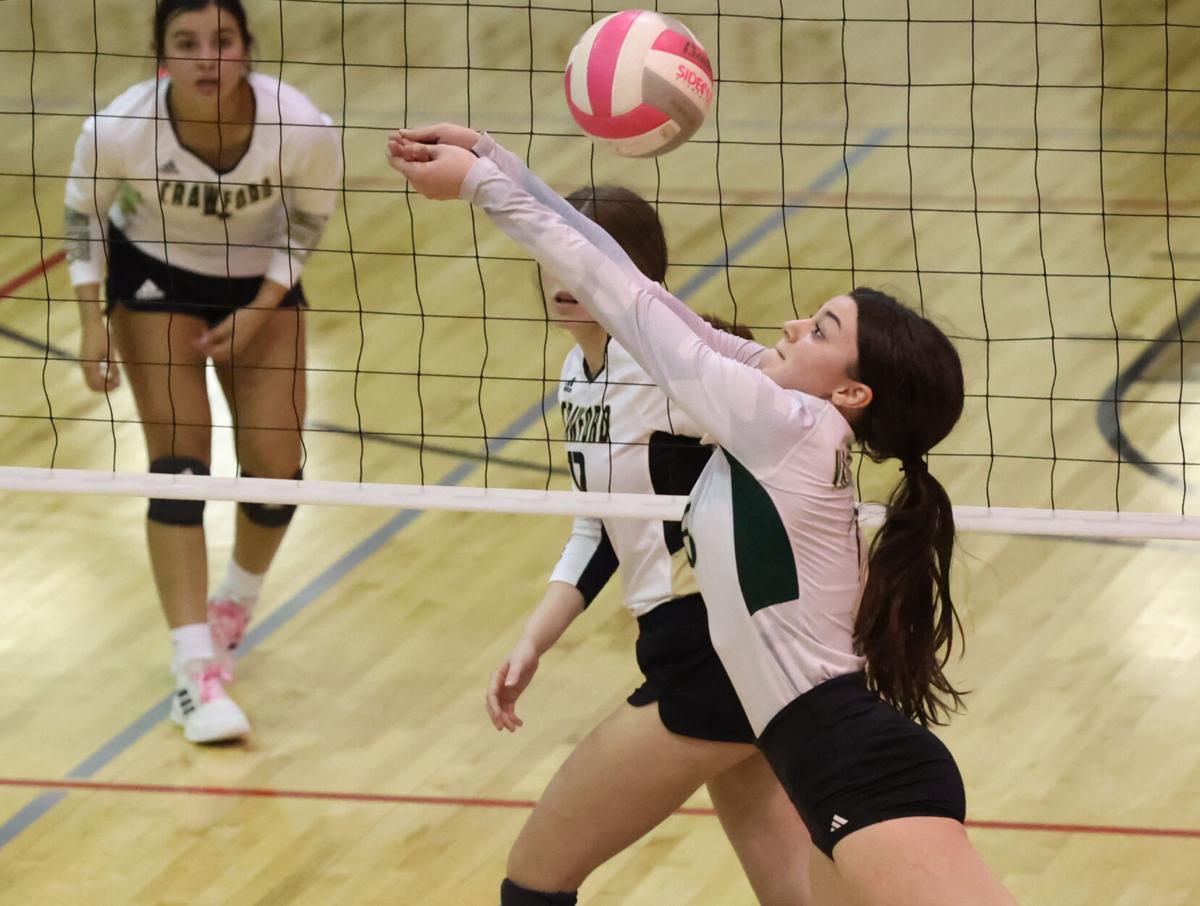 Valley Mills setter Kara Bruington looks to set up a teammate against Crawford in the second set.

CRAWFORD — For Crawford’s three special seniors, the emotions swelled even before the first serve was struck. They linked arms with their parents and performed the Senior Night walk onto the court, then swallowed hard as head coach Jeff Coker ticked off their many accomplishments. That was followed by a series of embraces from the underclassmen.

Then, led by those seniors that Coker referred to as “The Big Three,” Crawford went out and did what it does. That is, coax tears out of their oft-overmatched opponents.

Seniors Lexi Moody, Katie Warden and Kylie Ray all shone as the No. 1-ranked Lady Pirates closed out the volleyball regular season with a 25-7, 25-12, 25-3 win over Valley Mills.

It delivered a familiar result for Crawford (38-6, 14-0), which improved to 160-20 in the seniors’ four-year run. The Lady Pirates have now won 140 straight district matches.

“They’re all so different, but they’ve just put in so much hard work and so much commitment and so much leadership,” Coker said. “The joy and enthusiasm that they play with and how dedicated they have been to this sport has been really phenomenal, and obviously they’re talented players.”

Anyone who watches them play or has the misfortune of lining across the net from them understands that truth. Such talent was on display against Valley Mills (19-10, 8-6). Warden finished off points with her usual power and precision, whether parachuting toward the net or thumping away from the back row. She finished with a match-high 18 kills in 33 swings, a .424 hitting percentage.

Ray strikes a commanding presence at the net, whether she’s stuffing the occasional overpass or loading up for a running start to hammer down a no-look set from Moody. She pounded eight kills with a .429 hitting percentage.

And, of course, Moody’s deft touch is only surpassed by her savvy understanding of timing and knowledge of the game, whether she’s self-dialing her own number or that of her teammates. She picked up four kills in six attempts to go with 27 assists.

The emotions of Senior Night gave all three some pregame goosebumps, but once the whistle blows to signal ready to play, they’re seemingly always ready.

“It was a quick turnaround, and then you’ve got to go out and play. I was a still a little shaky,” Ray said.

Added Warden, “Once the music starts playing and you run out, it’s like, ‘OK, it’s game time.’”

Valley Mills fashioned its best district record since 2018 this year and spent some time in the state rankings earlier in the season, but like most teams in Class 2A the Lady Eagles have a steep hill to climb to reach the rarefied air that Crawford occupies. Other than the occasional block or flurry here or there, Valley Mills never gave the Lady Pirates much trouble.

In the third set, the Lady Pirates basically rested on defense, as they were able to show off their serving prowess and rack up a ton of points from the line. Junior outside hitter McKenna Post turned the ignition key on the surge by running off the first 12 points of the set, including a pair of aces that Valley Mills’ back row defenders couldn’t handle.

Later in the set, Ray and Moody both dropped in aces of their own. But it was Warden who encapsulated the full power of Crawford’s service. She possesses a filthy jump serve with a heavy amount of topspin that unfolds like a cannonball rolling downhill. After Valley Mills blocker Kamryn Pankenoien blocked a Crawford attack and then stared a little too long for the Lady Pirates’ liking, Warden brought the hammer, pummeling five aces in a 7-0 match-closing run, including a missile on match point.

“We do talk a lot about serving,” Coker said. “We got a little extra motivated. One of their girls kind of stared us down after a block, and I don’t think we liked it very much. I know I didn’t. You see a lot more focus once that happened.”

It seemed a fitting way for the Crawford seniors to go out in their home gym, where they’ve built so many winning memories.

“It means a lot to us, just because all of us grew up here, we started out here, and I think it just means a lot to watch all the other people in front of us, too, who played on this same court,” Moody said. “To be the ones doing it now is just an awesome experience.”

Of course, they’re not done yet. After a regional final showing as freshmen, a state championship season as sophomores and a state final appearance last year, the Lady Pirates’ Big Three want nothing more than to add a second ring to their jewelry collection. They’ll start their playoff journey at 6 p.m. on Monday against Meridian in Valley Mills.

“Hopefully, that’s the goal. It’s not like we’re done with this gym yet,” Ray said. “We’ve still got practice every day, and that’s what is going to get us to where we hope to be.”

Valley Mills setter Kara Bruington looks to set up a teammate against Crawford in the second set.