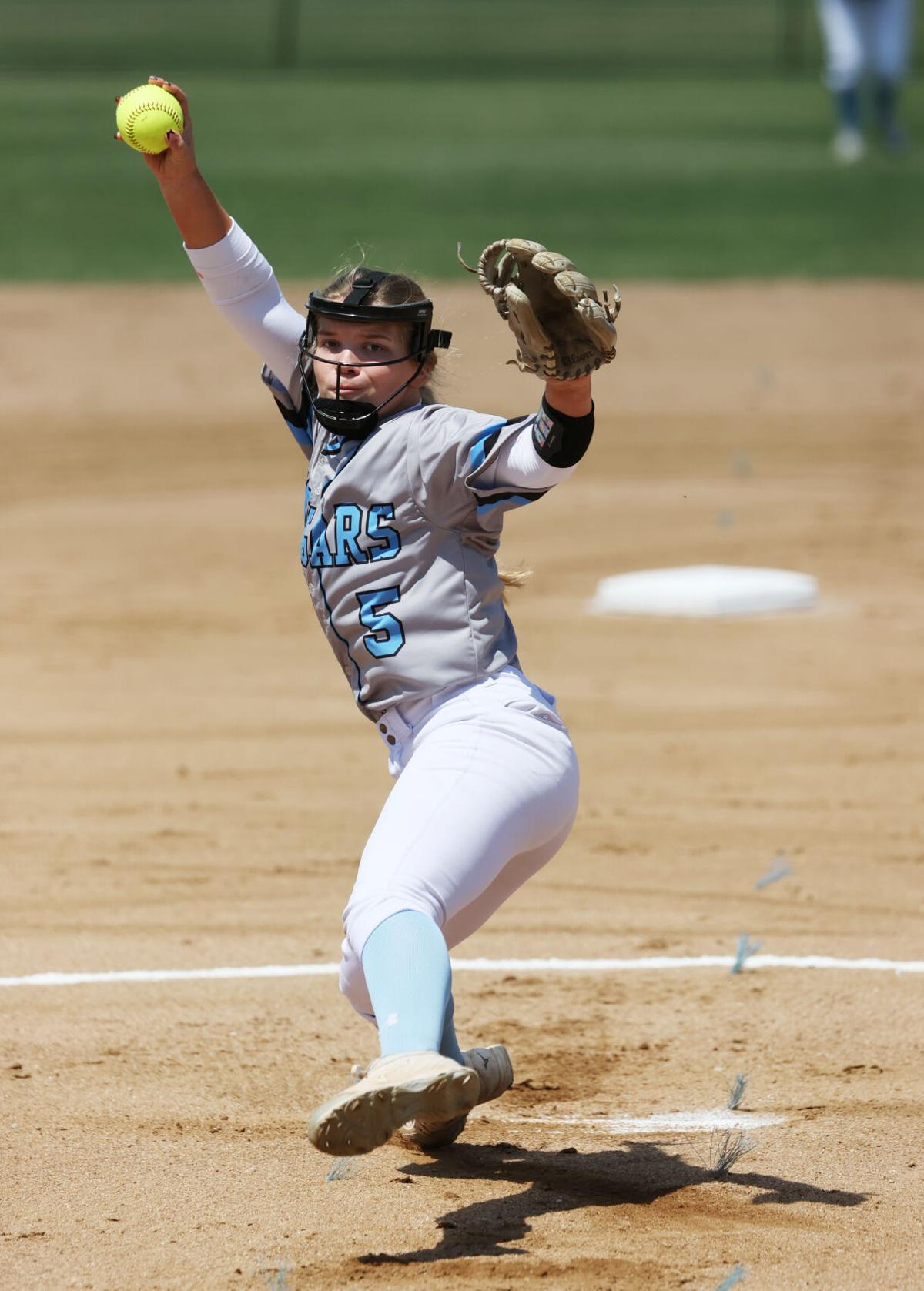 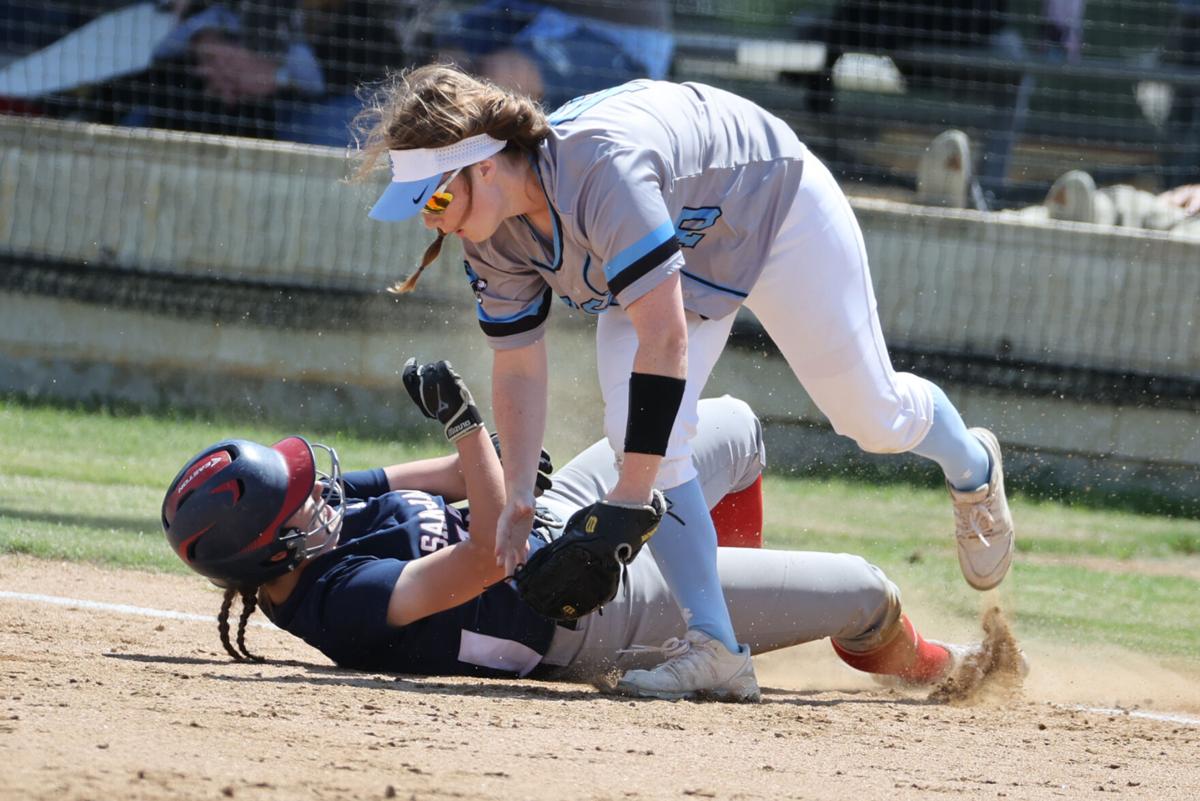 Bishop Reicher’s Ellie Ward tags out San Jacinto Christian’s Cassie Saker as she attempts to reach third base in the second inning. 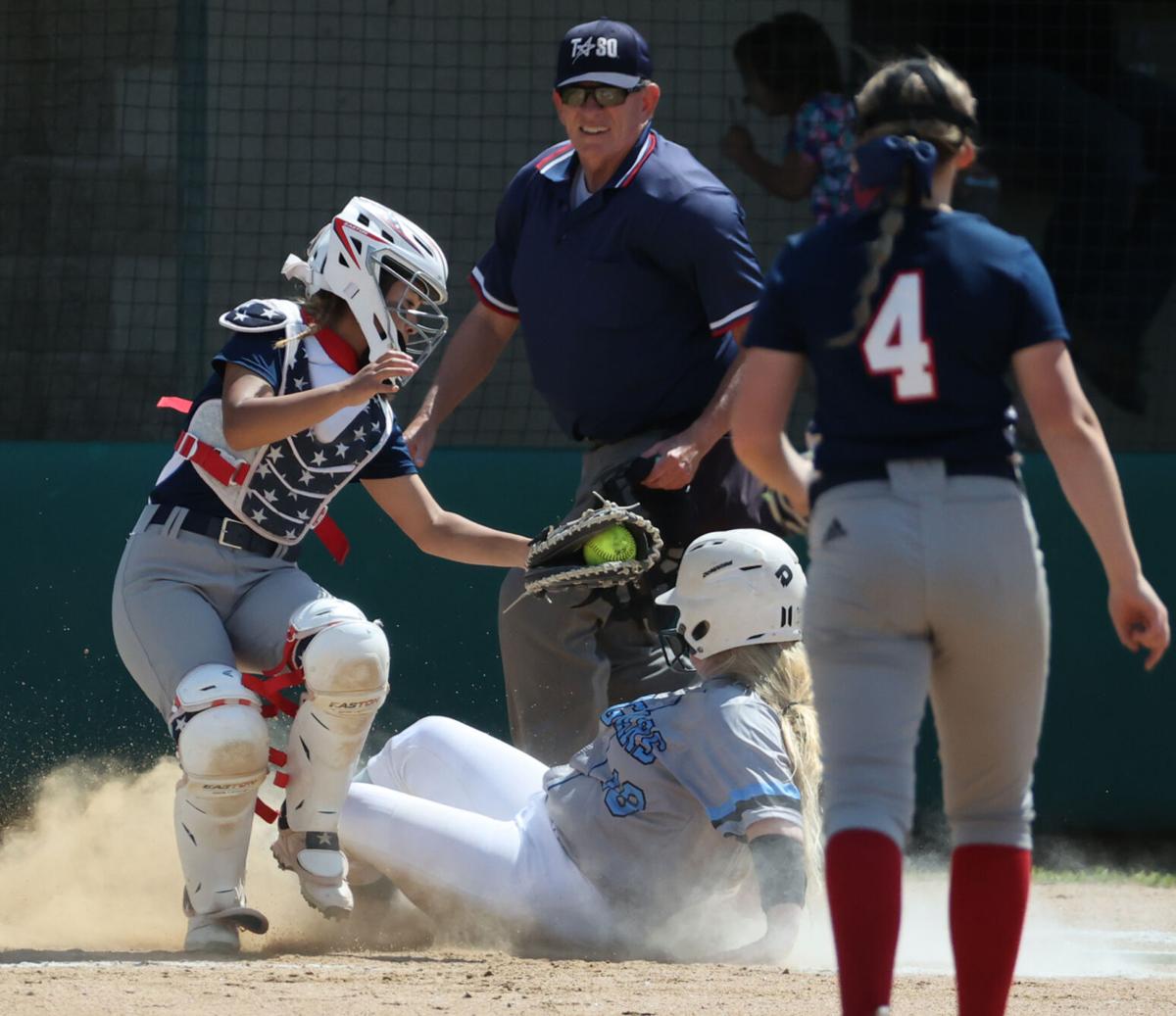 Though the Lady Cougars didn’t always play up to their own high standards in the TAPPS District IV area playoffs, they did enough things right to take a comfortable 7-1 win over Amarillo San Jacinto Christian on Tuesday at Riverbend Park.

Boettcher threw a four-hitter with three walks and nine strikeouts to improve to 13-0.

“Hannah pitched well, and her curveball and screwball were good,” said Reicher coach Cheryl Urbanovsky. “We usually play a little bit better. We’ve got some good runners. But we had a couple of baserunning errors that we normally don’t have.”

The Lady Cougars were in command the whole time as they scored in each of the first four innings to open up a 7-0 lead.

Georgeanna Tucker opened the first inning with a double off Kenadi Bearrs and moved to third on Ellie Ward’s single. Tucker and Ward scored on ground outs by Bri Hapenney and Boettcher to take a quick 2-0 lead.

With Kenzie Zander opening the second inning with a double and scoring on Abby Peters’ sacrifice bunt, Reicher grabbed a 3-0 lead.

The Lady Cougars doubled their lead with a three-run third inning. After Ward opened the inning with a single and Hapenney walked, Boettcher drilled a run-scoring single. Hapenney scored on Brittney McElyea’s grounder before Boettcher came across on an error.

The Lady Cougars added another run in the fourth when Ward walked and scored on Hapenney’s triple to right field.

“Most of the time we’ll hit some good deep shots if we have a lot of runners on base,” Boettcher said. “We try to play smart and hit smart when runners are on.”

Boettcher threw a one-hitter through six innings, but San Jacinto loaded the bases in the seventh with infield hits by Cassie Saker, Alex Englemann and Kloe Mireles. Saker scored on a wild pitch before Boettcher forced Cailee Heller to ground out to end the game.

“I know I could have pitched better, but I just kept my head down and knew there were three pitches I could throw and trust them,” Boettcher said. “I definitely felt like my defense was behind me today.”

AUSTIN — Central Texas track fans saw a lot of purple and gold cross the finish line on the second day of the UIL Track and Field Championships.

Super Centex Girls Soccer Team: When your team’s most talented player also doubles as one of the hardest workers, that rubs off on everyone else — in the best way possible.

Super Centex Boys Soccer Team: La Vega forward Torres made the most of his shot

You could game plan for him, mark him, try to keep the ball away from him, but eventually La Vega forward Omar Torres was going to have his chance.

Another playoff game, another ho-hum win for the Midway Pantherettes.

Bishop Reicher’s Ellie Ward tags out San Jacinto Christian’s Cassie Saker as she attempts to reach third base in the second inning.