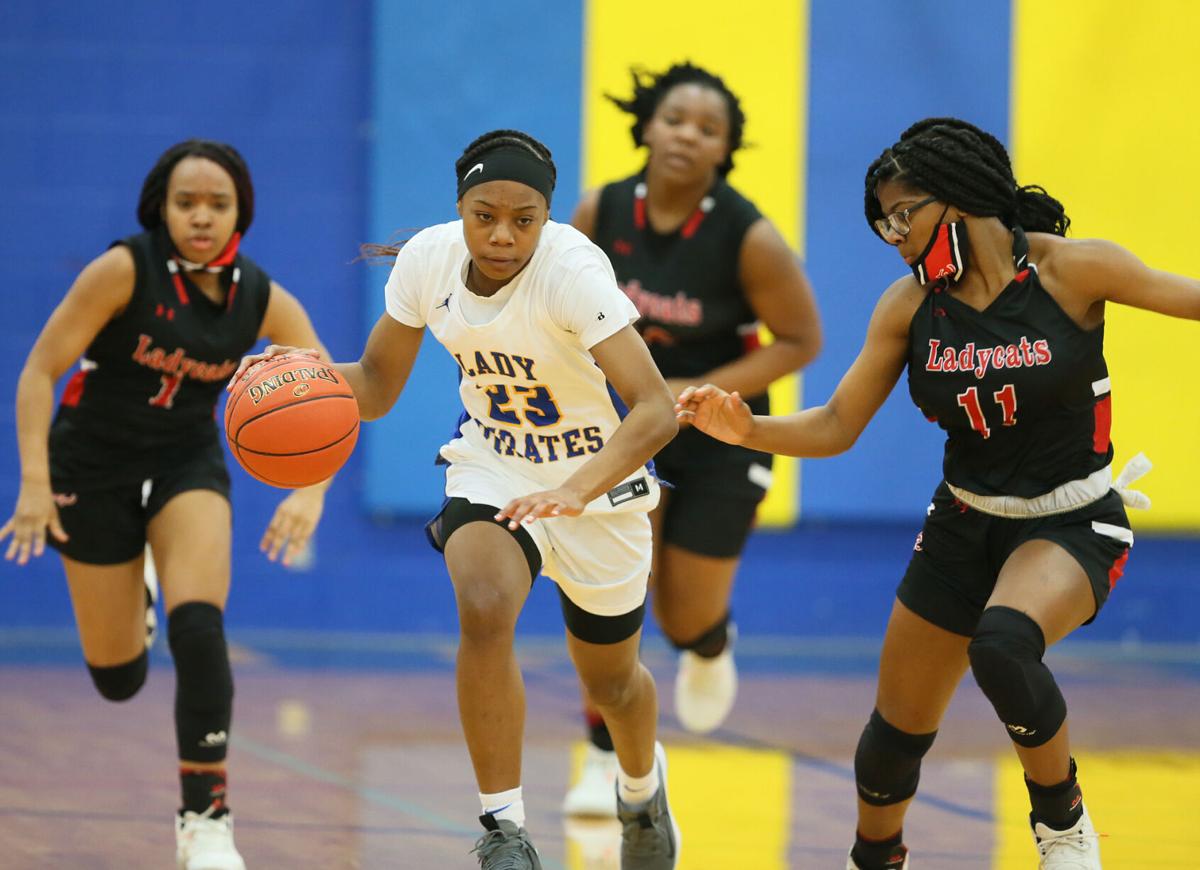 La Vega’s Andrea Johnson breaks loose downcourt while being defended by Mexia’s Gwendolyn Johnson (right) in the first half of the 25th-ranked Lady Pirates’ 41-32 win. 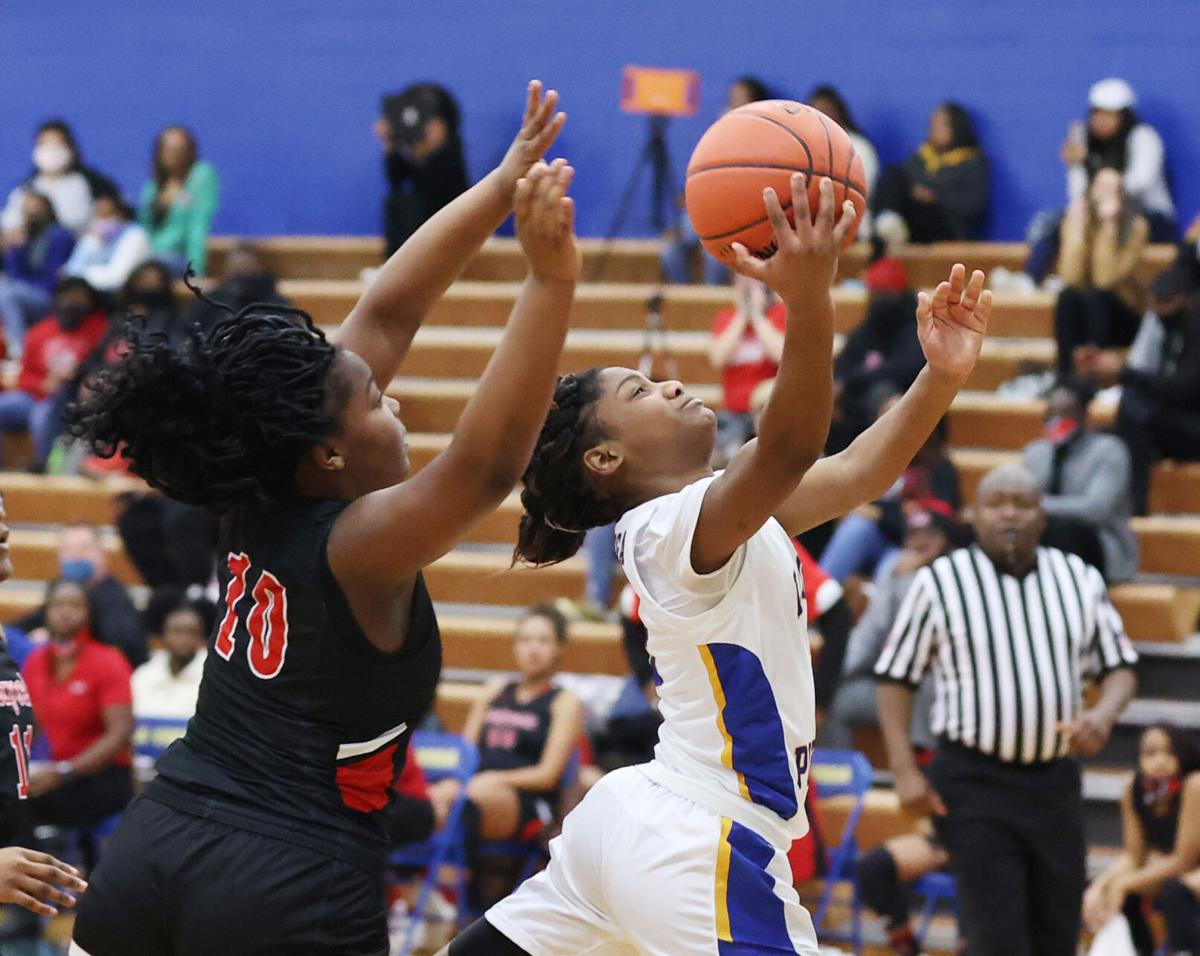 La Vega’s Kiyleyah Parr (right) attempts a shot over Mexia’s Michaiah Miller in the first half of the Lady Pirates’ victory, which gave them sole possession of first place in District 18-4A. 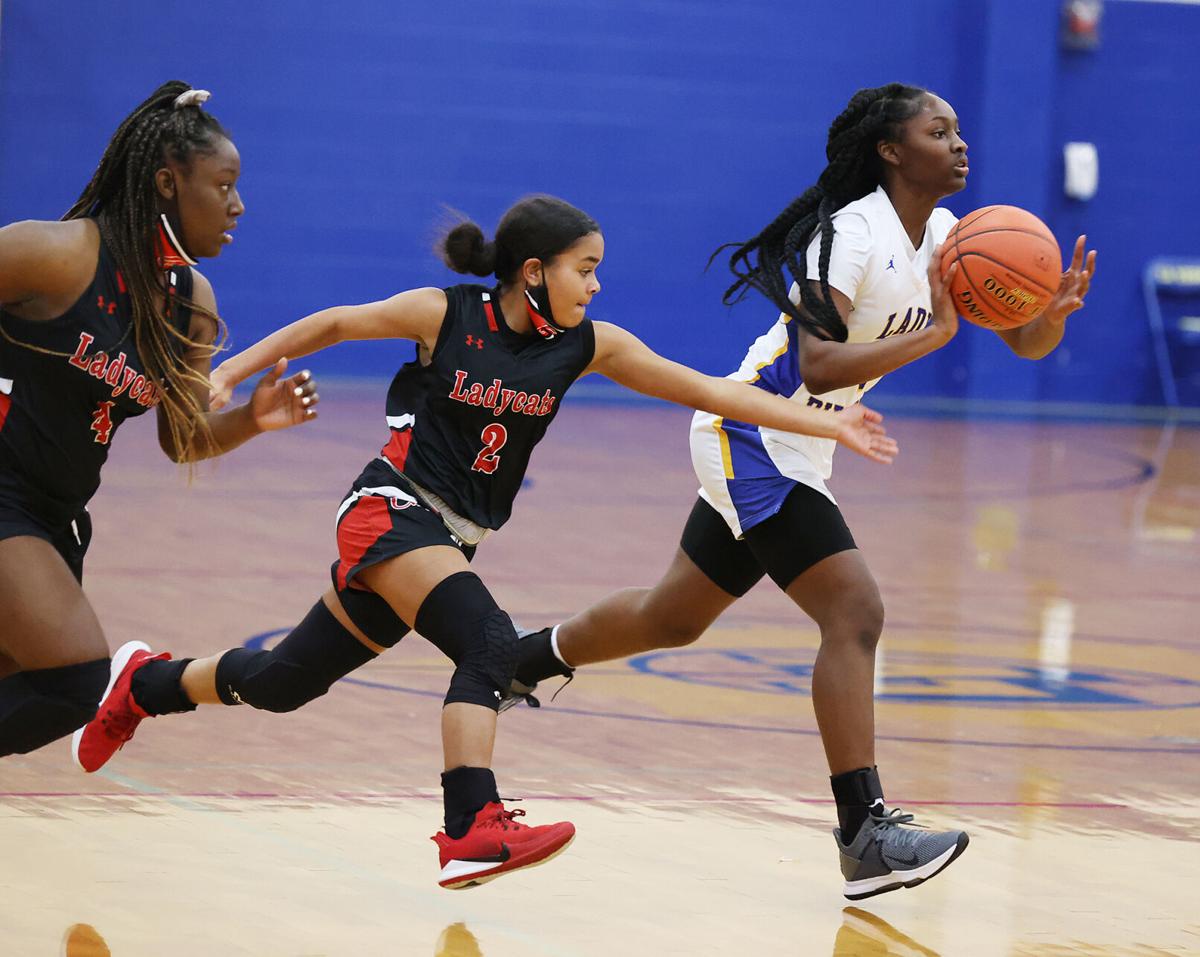 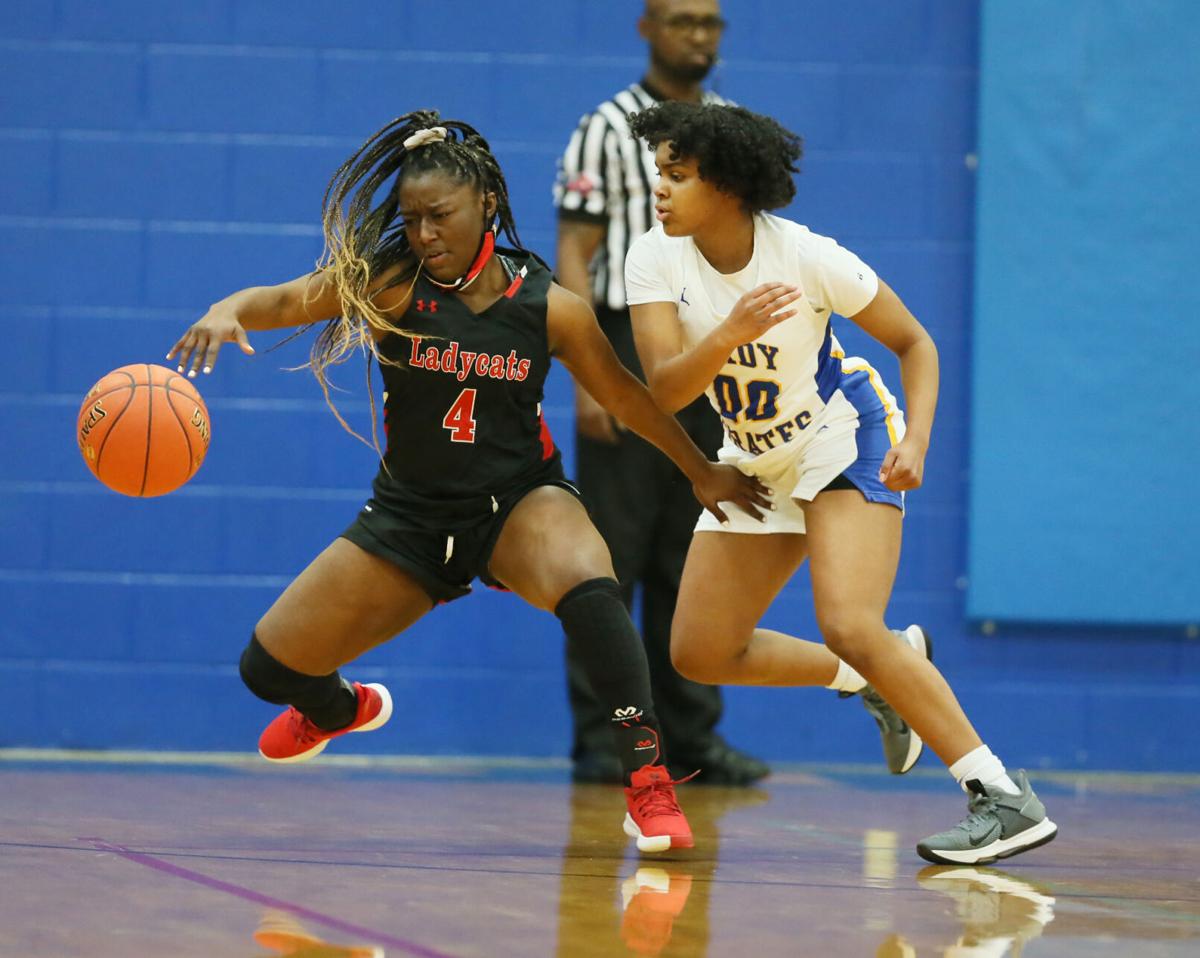 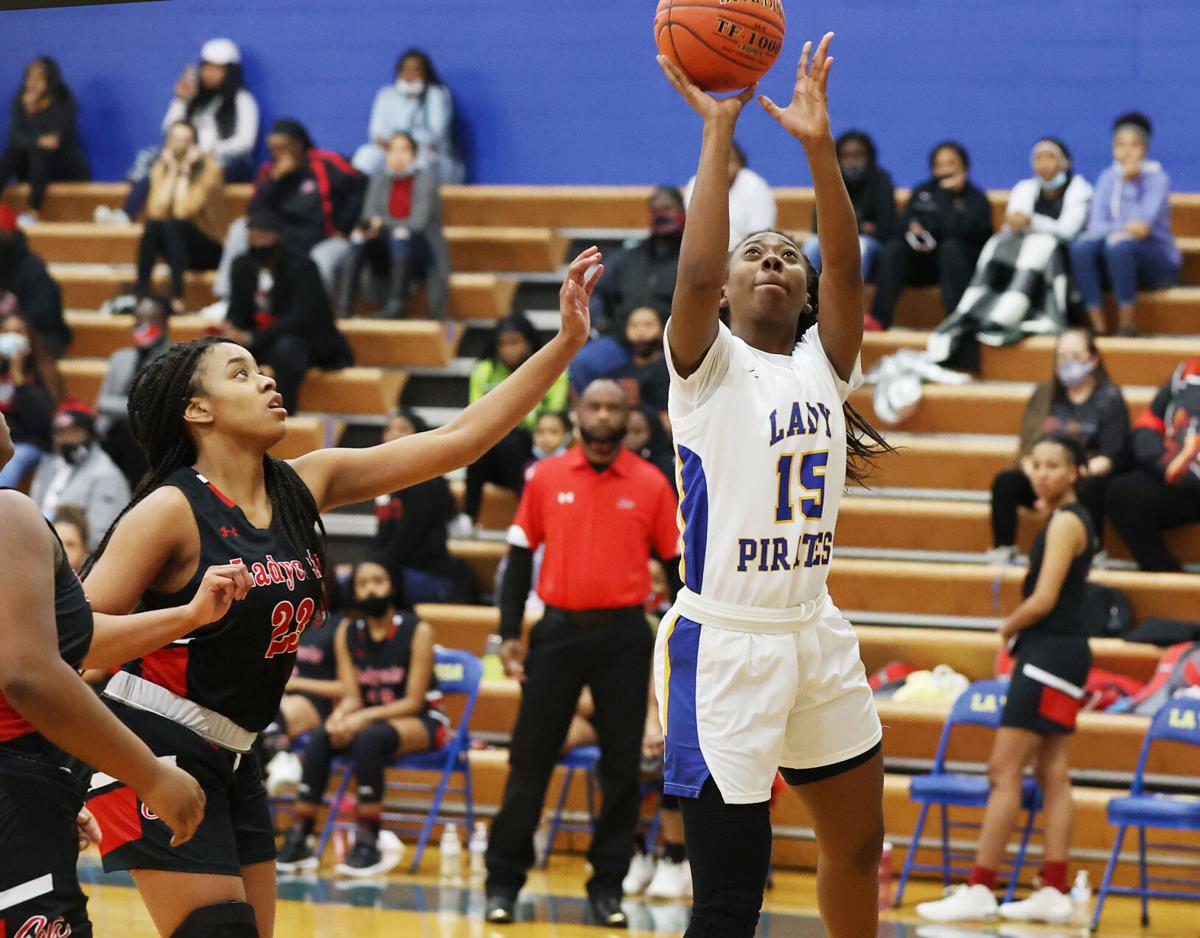 And now the Lady Pirates have the place all to themselves.

In a rough-and-tumble tussle between a pair of District 18-4A co-leaders, La Vega’s girls used a 12-1 second-quarter run to deflect Mexia, 41-32, on Tuesday night at the La Vega Gym. The 25th-ranked Lady Pirates seized sole possession of first place in the district with the win, moving to 12-5 overall and 3-0 in the league.

This one wasn’t going to win any beauty contests. These proud programs, both with past state championships to their credit, played aggressively from the outset, sometimes to their own detriment. Collisions and turnovers abounded.

But La Vega found just enough of a rhythm to win, even on a night when the steady whistles and buzzers laid down a funky beat.

In the first quarter, the scoreboard on La Vega’s offensive end went haywire, displaying a different time and, occasionally, a different score than the actual count. Maybe that should’ve been a warning sign that nothing would come easy.

As Willis alluded, the first quarter was a ragged one. Mexia (9-4, 2-1) capitalized on a pair of 3-pointers from Yasmine Green and Jaleah Davis to take an 8-6 lead by the end of it. Green apparently noticed that the bank stayed open late in Bellmead, and she bounced her long-distance bomb off the window and in for the score.

Yet La Vega didn’t panic. That’s a testament to an uncommon maturity that belies the team’s youth, considering the Lady Pirate roster features seven freshmen and sophomores, many of whom play big minutes.

In the second quarter, La Vega began to find a crisper level of play on the offensive end and shot out in front. Freshman point guard Mar’cyah Willis poked the ball away from a Mexia ballhandler and sped downcourt for an easy deuce. Sophomore Andrea Johnson angled inside for a left-handed layup. But it was the outside shooting of freshman guard Kaley O’Neal that gave La Vega its most comfortable breathing room. O’Neal came off the bench to nail two 3-pointers in the quarter, and the Lady Pirates opened up a 24-14 lead by the halftime break.

O’Neal finished with a team-high 11 points.

“That’s the part about it. Everybody is starting to understand, you do your job,” Marcus Willis said. “You buy in and play your role. She came off the bench and gave us some major, major energy. She’s definitely the MVP of today because she came in and did her job. Unfortunately, she fouled out, got in some foul trouble, but you know what? I’ll take it. Kaley O’Neal is the MVP.”

Of course, if O’Neal was the MVP, then Ri’azia Smith at least deserves the Defensive Player of the Game game ball. Another freshman, the angular, 6-foot-2 Smith worked around foul trouble to deliver plenty of trouble for Mexia’s drivers any time they reached the hoop. Smith swatted away six Ladycat shots to go with 10 points and six rebounds.

“She’s tough. She’s a big presence,” Marcus Willis said of Smith. “She helps us out tremendously on the defensive end. Even when she’s not playing well on offense, she’s a big major presence that can stop some stuff and clog the paint up a little bit, which is very, very helpful.”

La Vega widened the gap over Mexia to as large as 30-17 following a runout score from O’Neal in the third quarter. The Ladycats clawed back to within eight at 36-28 with 4:23 left in the fourth when the smooth Green intercepted a La Vega pass and darted for a breakaway bucket.

Mexia would get no closer, though. O’Neal kept up her fine play, scoring on a sweet Euro step and scoop with 3:06 to go, and the Ladycats had to play the foul game at the end to try to stop the clock.

Though it was ugly at times, La Vega’s Willis expressed pride over the way his team fought, and he envisions better performances ahead.

“Especially when we’re the underdogs,” he said. “We’ve got five freshmen, two sophomores, and all those girls play some big, big minutes. Everybody is counting us out, but we’re going to write our own story. We just showed it right now, that we’re a force to be reckoned with. We’re going to keep playing hard.”

LORENA — Senior forward Corbin Parnell slithered her way to a team-leading 12 points to push the 20th-ranked Lady Leopards past the 25th-ranked Lady Wildcats in a battle of co-leaders in 17-3A.

MEXIA — The Pirates started District 18-4A action with a fireworks-level bang, storming into Mexia and storming out with a big-time win.

The duo of Randy Woolf Jr. and Marcus Willis Jr. proved especially potent for the Pirates (7-2, 1-0). Woolf turned in a monster game with 32 points, 11 rebounds and six assists, while Willis was equally effective with 28 points, eight boards and nine assists. Jordan Rogers contributed 13 points and three dimes in La Vega’s outburst, which marked the second time this season the Pirates have scored 90 or more. They also put up 96 in a win over Ennis.

La Vega will next play rival Connally Friday, while Mexia (4-4, 0-1) will look to bounce back against China Spring.

LORENA — The 16th-ranked Leopards stayed perfect in district play as they put together yet another solid scoring night in a win over the Wildcats.

The Leopards saved their sharpest play for the end, closing the game with a 25-point fourth quarter. Lorena moves to 13-4 overall and 4-0 in District 17-3A action, and will next play Clifton Friday. Whitney falls to 8-8 overall and 1-3 in district. The Wildcats will look to rebound Friday when they host McGregor.

Midway softball coach Jordan Williams said she can see her team getting better as the playoffs approach.

When the wind blew in and scrambled the Class 6A Region 2 boys’ golf tournament, Midway junior Brayden Bare held steady.

La Vega’s Andrea Johnson breaks loose downcourt while being defended by Mexia’s Gwendolyn Johnson (right) in the first half of the 25th-ranked Lady Pirates’ 41-32 win.

La Vega’s Kiyleyah Parr (right) attempts a shot over Mexia’s Michaiah Miller in the first half of the Lady Pirates’ victory, which gave them sole possession of first place in District 18-4A.